“The Best Airport in the World”

Our long layover in Seoul was at least partially the result of reading this phrase more than once in considering what flight path we would be taking home. With Sri Lanka being almost exactly halfway around the world from Saskatchewan (over 13,000 kilometres and 11 ½ hours time change) we had a multitude of choices going either west (through the Middle East and Europe) or east (through almost any major Asian city). While Singapore’s Changi Airport has long been the popular choice as the world’s best airport, Incheon International Airport (ICN) in Seoul has recently been making a strong push to the dethrone the champ. After reading about all the great facilities and free perks in Seoul, as well as how easy it is to get from Incheon Airport to Seoul, not only did we choose a flight that took us that direction, but even found one that extended our Incheon Airport layover to give us an entire day in the South Korean capital. As an added bonus, our next leg would take us through Minneapolis, probably our favourite North American airport. 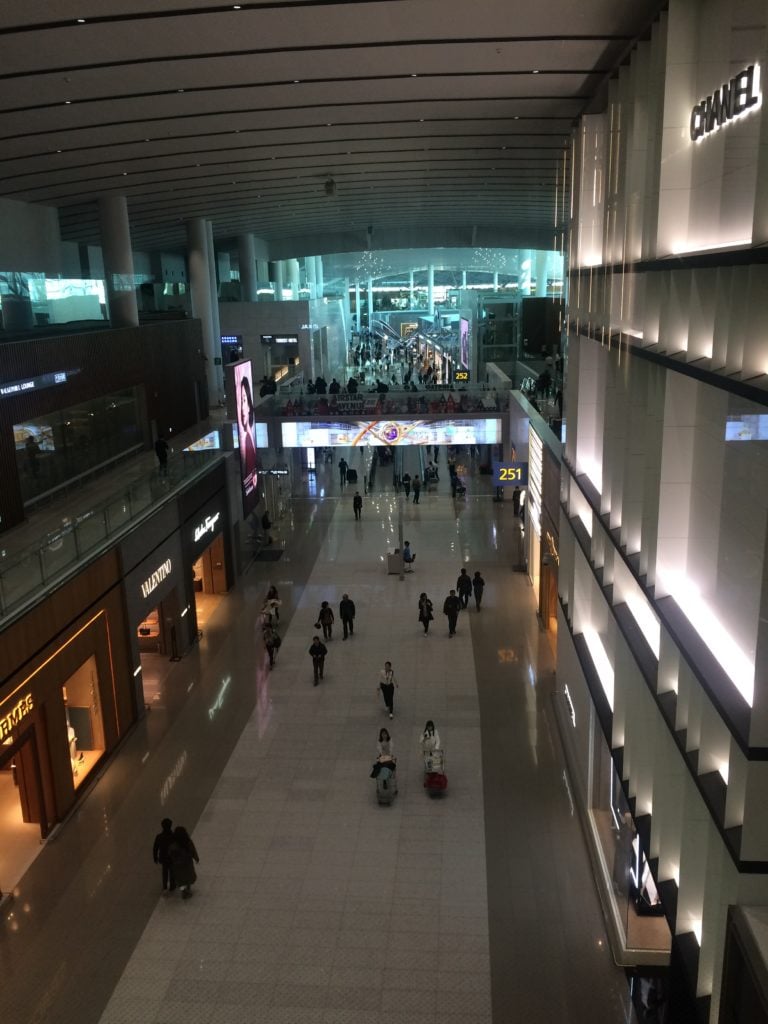 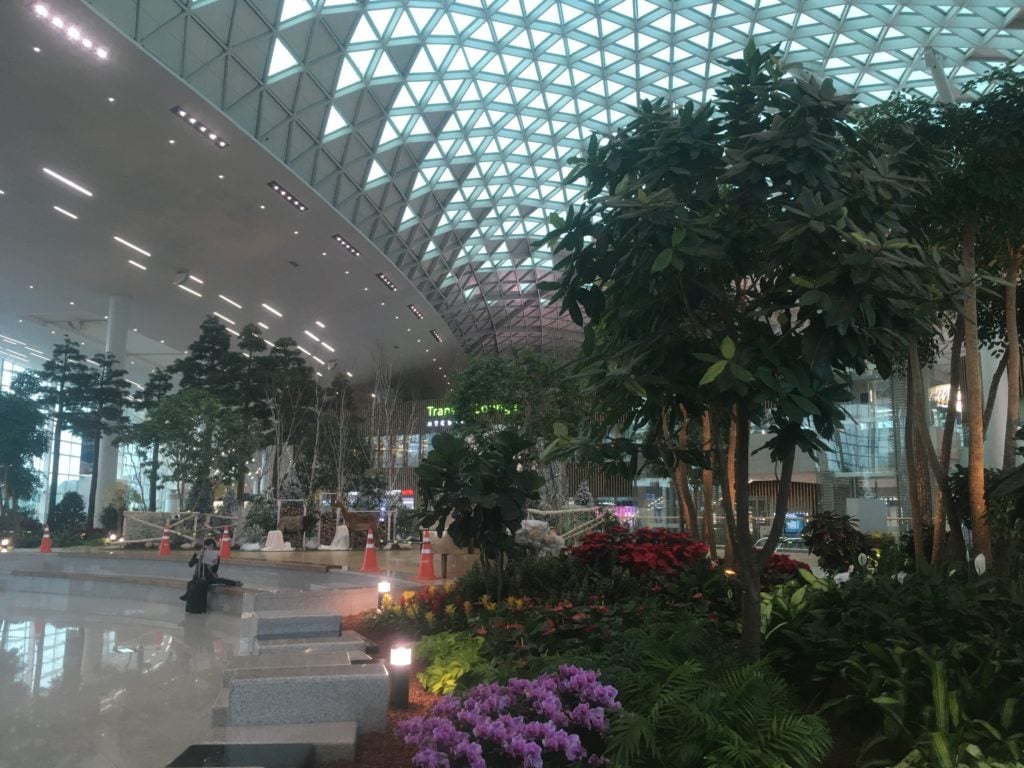 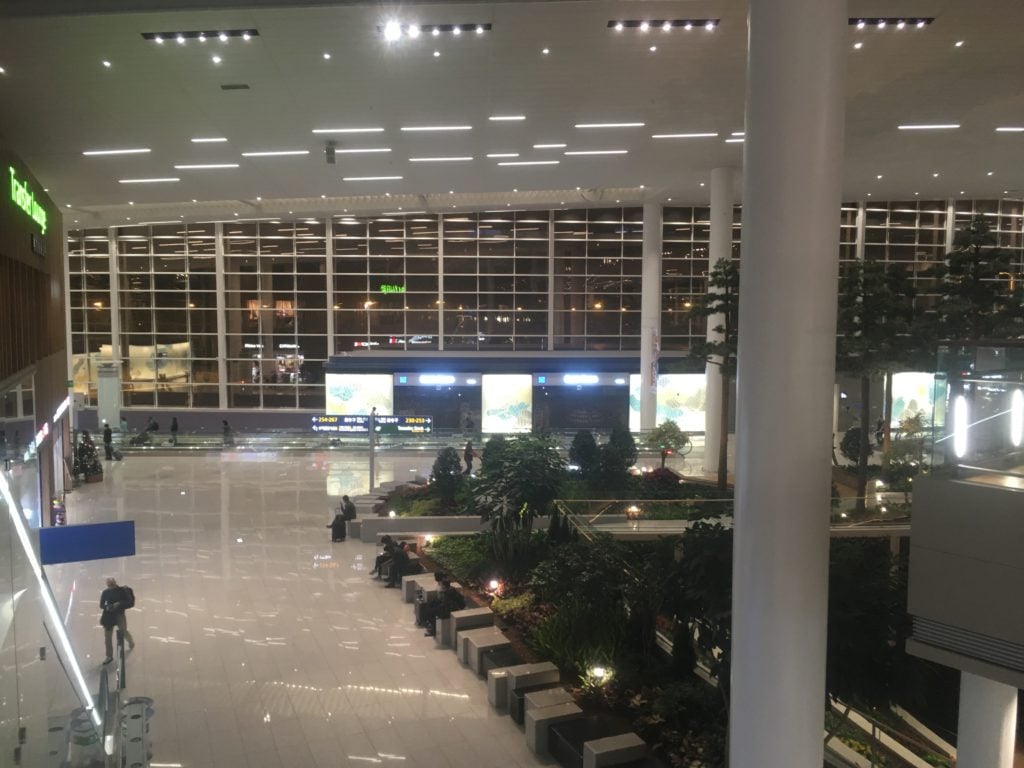 Here is a guide to your Seoul layover:

As you might expect, there is free wifi everywhere in both terminals. Which is the extent of what many airports bother to offer (if that). And, after spending the previous two months in Sri Lanka and Nepal, we were almost unreasonably excited to arrive in an airport teeming with public water fountains and water bottle filling stations. In addition, the restaurant options are both extensive and diverse, providing the opportunity to fulfill your foodie cravings no matter where you’ve been spending your time chowing down. Also, needless to say, like any modern airport, Incheon is absolutely riddled with shopping opportunities, including three massive duty-free options and dozens of high-end outlets such as Chanel, Gucci, Burberry, Cartier and even the world’s first airport-based Luis Vuitton. 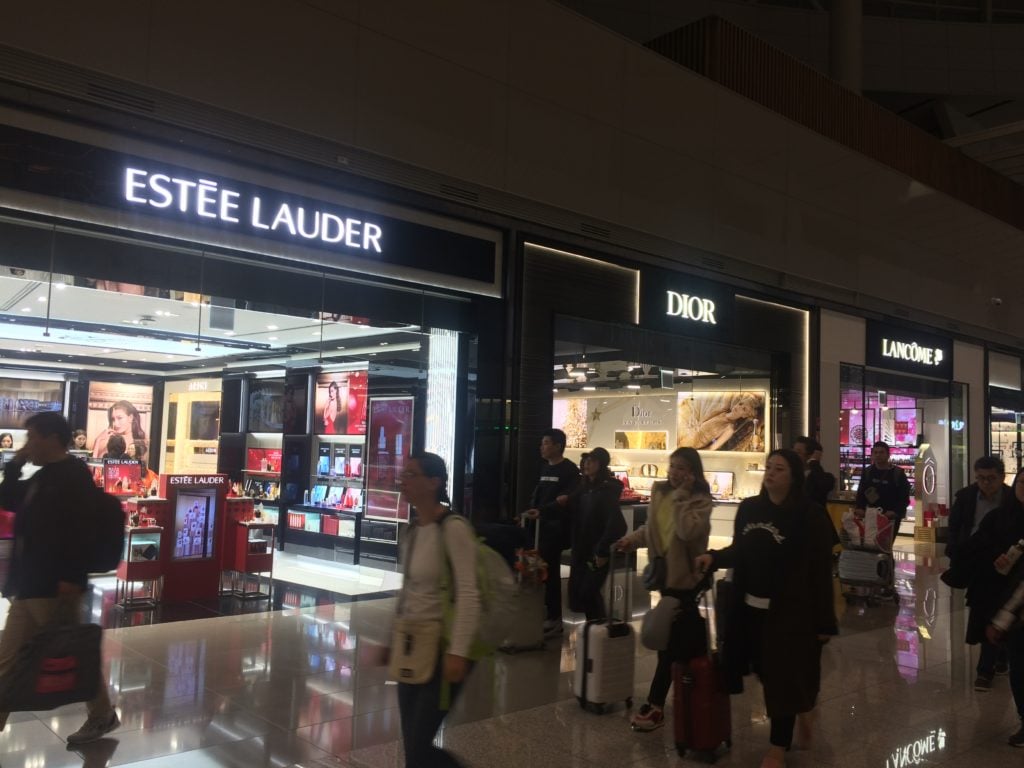 While we did not opt to blow the equivalent of our entire Sri Lankan budget on a trendy new handbag or irresistibly shiny broach, we absolutely took advantage of Incheon’s impressive array of comfort alternatives. The “Nap Zone” being first and foremost on our list, we quickly settled in for a couple hours of much-needed shuteye to energize us for the more active portions of our big layover. Each of terminals 1 and 2 feature a pair of Transfer Lounges where all the most important relaxation amenities are concentrated (gates 231 and 268 in Terminal 2 / gate 118 in Terminal 1). The nap zones feature dozens of sleeping loungers in a dark, quiet room (something everyone respected to a rather surprising degree). And if that still doesn’t sound sufficient to recharge your jet-lagged batteries, there is also a capsule hotel that rents out rooms for the night ($US50) or in 3-hour increments ($US20) – although sexy sharing is frowned upon. 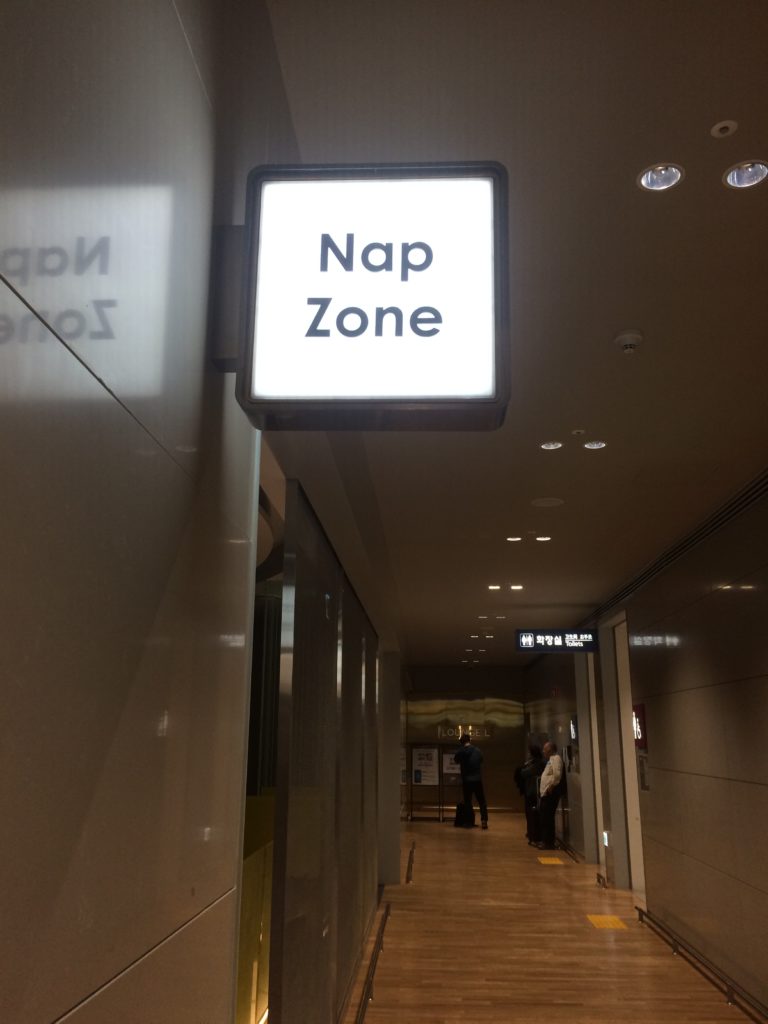 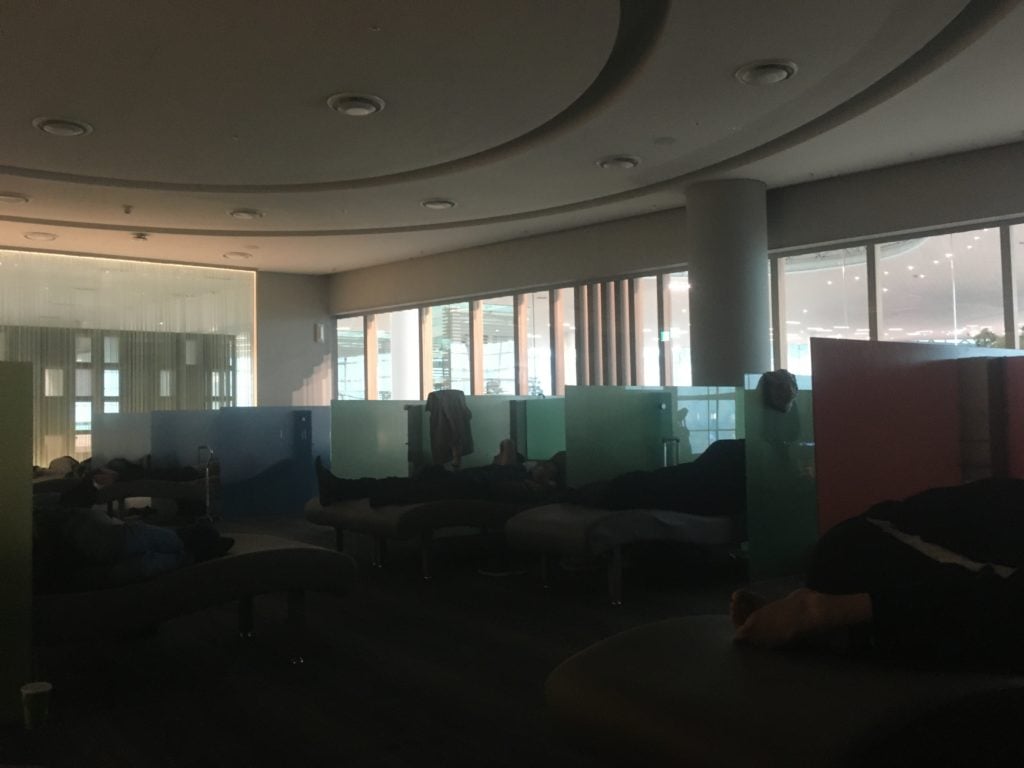 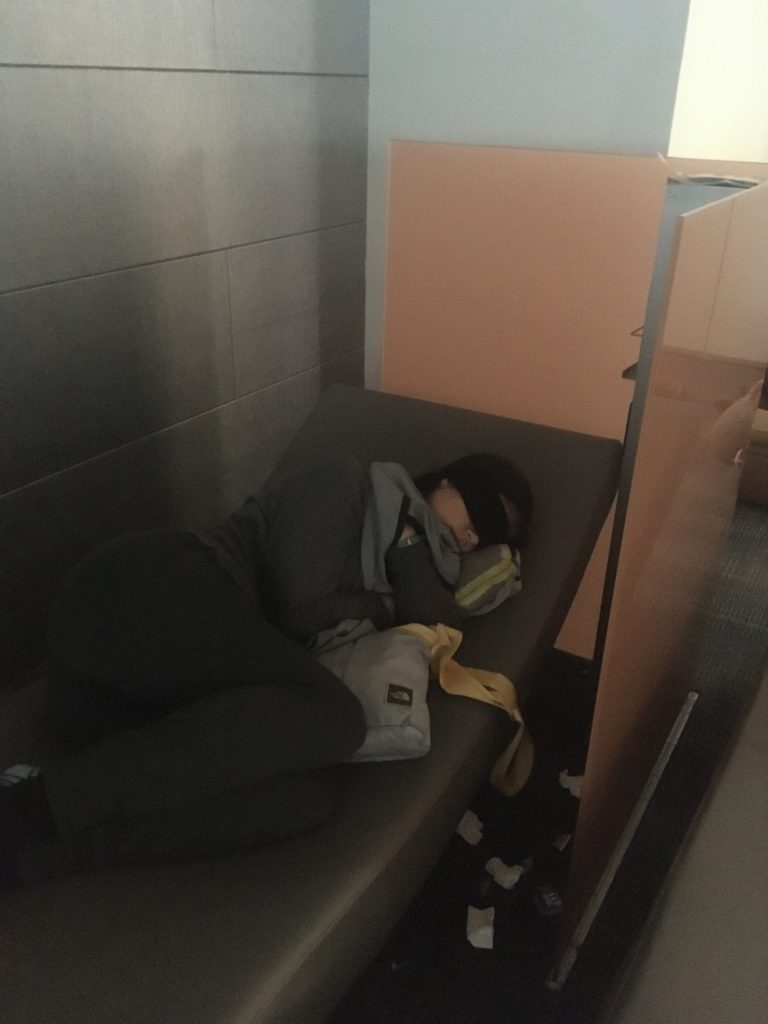 These lounges also provide uber-comfortable seating lounges (with footrests!), working desks, charging stations and, get this, free showers! Yep, you heard that right. One of the worst parts of long-distance flight connections for me, along with the inevitable lack of decent sleep, is the inability to recharge with a shower (however, short-lived that pick-me-up may prove). But Incheon not only offers free showers, but also provides towels, soap and shampoo. After a couple hours in the nap zone and a hot shower, we felt less like we were in the midst of a marathon flight than as though we were just waking up in another new and exciting destination. Of course, it doesn’t end there, with all of the following also available:

If, for some reason, you really want to stay connected to others in your group and your phone doesn’t have (affordable) service in Seoul, you can even rent a cell phone (could be handy for contacting your tour guide when lost in the alleys of Insa-Dong). 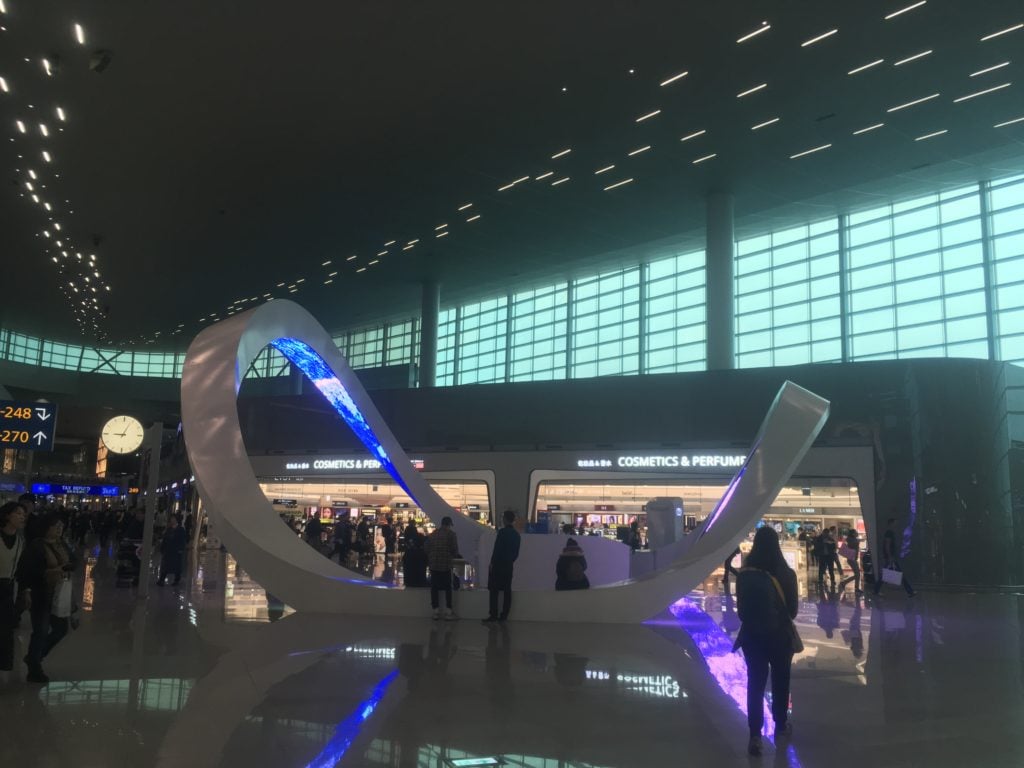 Of course, if the good folks at ICN were content to design an incredibly modern, comfortable and logical airport that checks all the practical boxes for long-distance travellers, the conversation would likely end with “free shower!” But, no, their sights were set much higher than that. You don’t join the “World’s Best” discussion with some small towels and a lightless room full of snorers. Nope, you also need to add a few surprises to set yourself apart from the usual “tidy air-conditioned, essentially a shopping mall” entries that can be found in various major centres around the world. Let’s see, how about…

Digital gym – although, presumably, the sweat is real.

Spa – a real massage to balance out that “massage” you had in Bangkok.

A skating rink – best to rent a pair of skates there so as not to alarm the flight attendants.

Library (I didn’t take the time to see if it mainly serves as a place for homeless people to use the bathroom, like most do) 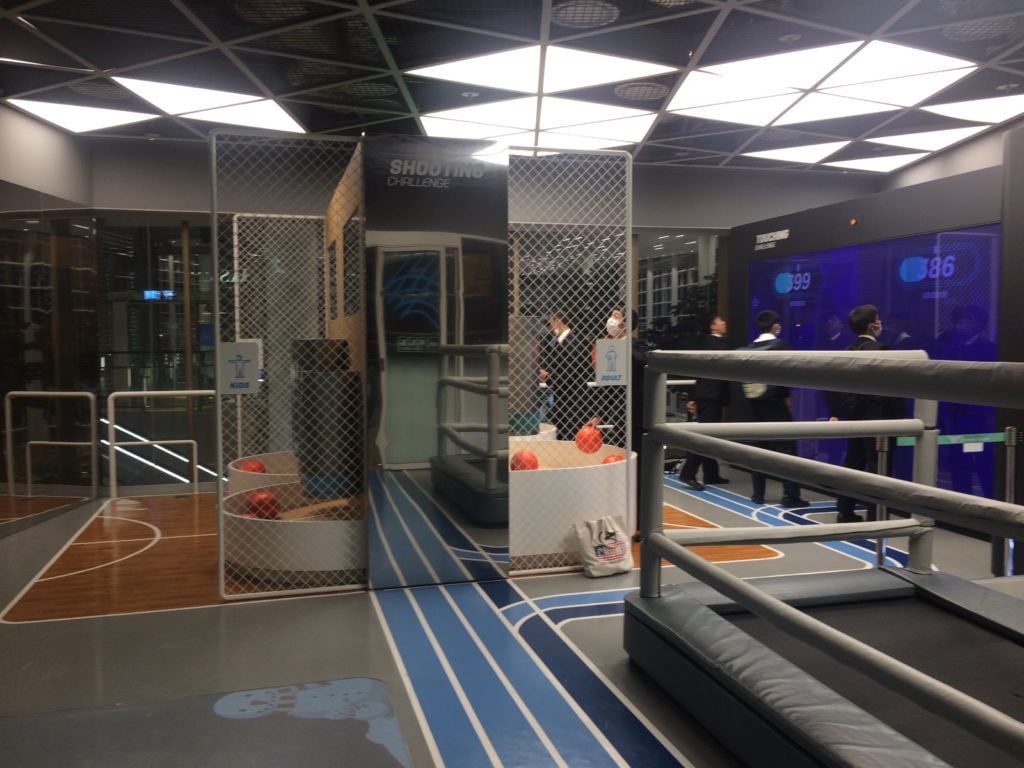 Virtual reality experience – rather than featuring the magic of flight or wonders of space, they decided to show you what it would be like to be a piece of luggage getting sorted and loaded. 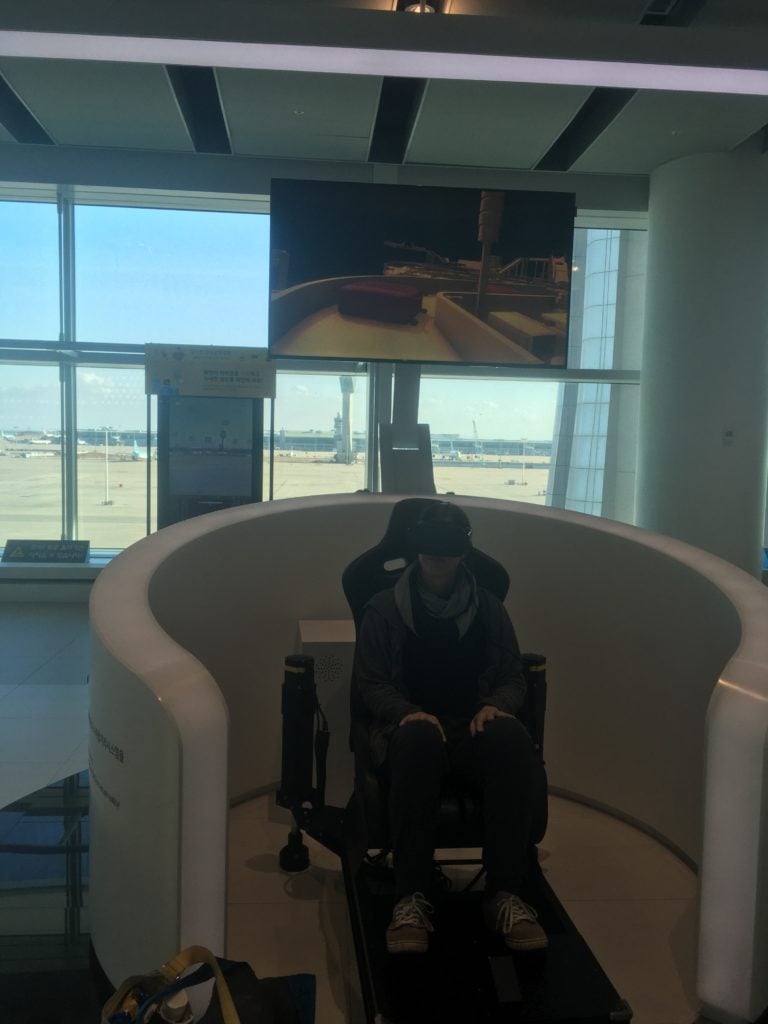 Gardens – supposedly a large number, varying from “tree” to “cactus” to “flower” and “rock” – the woman in the information desk will happily Google it. 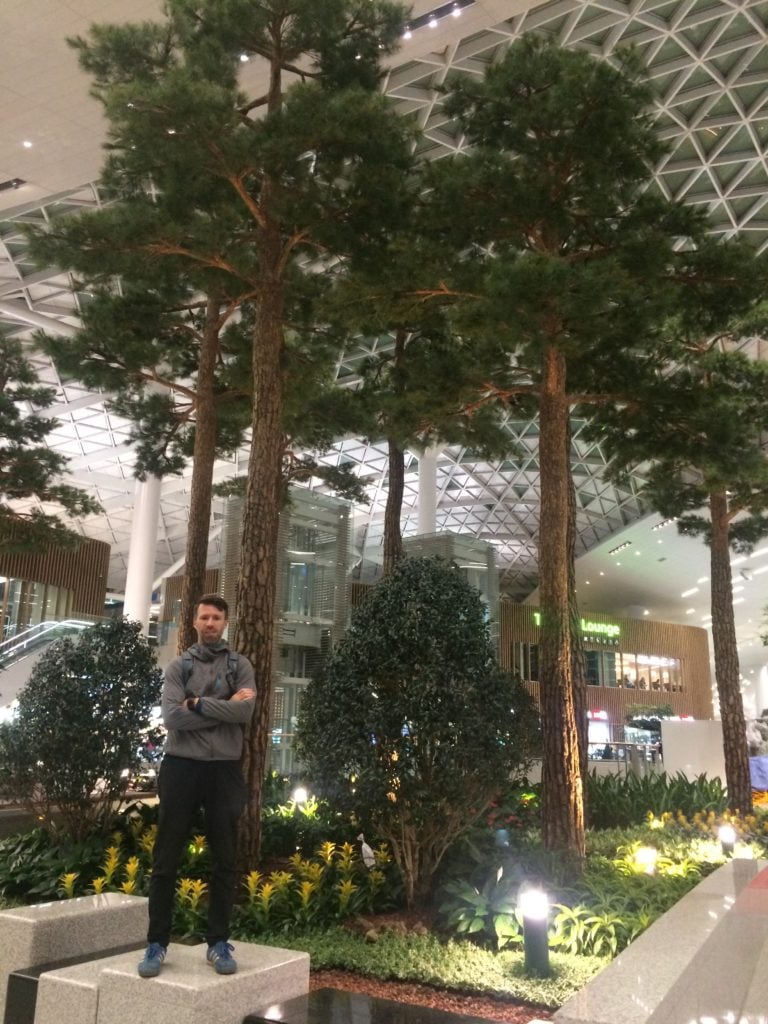 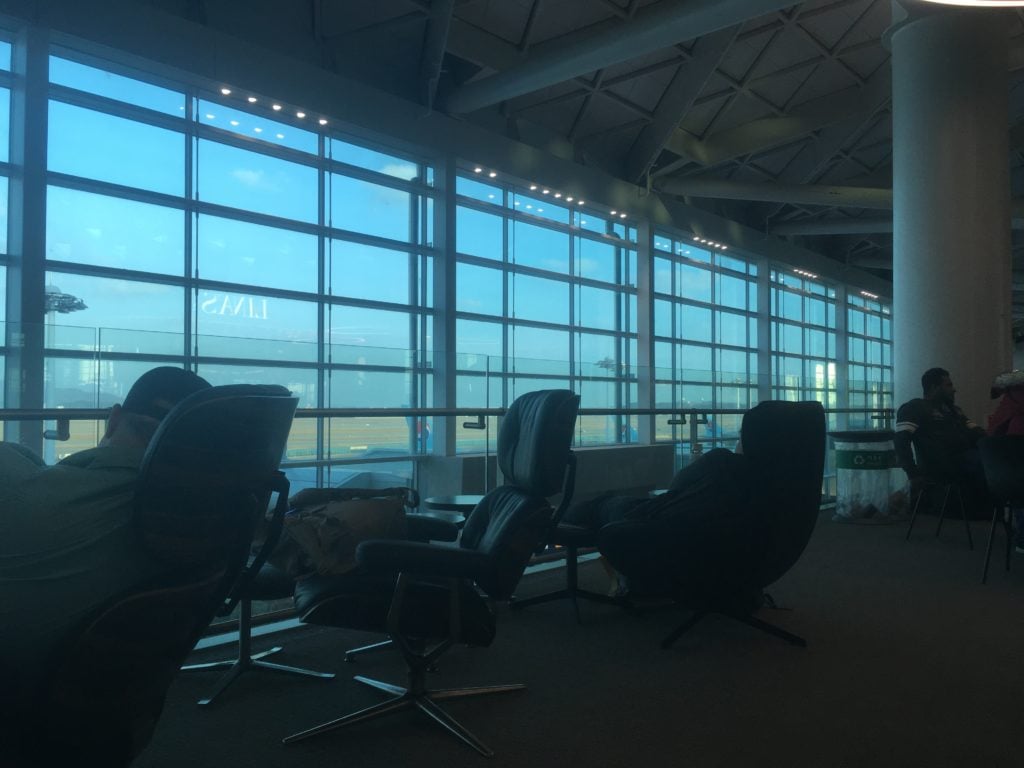 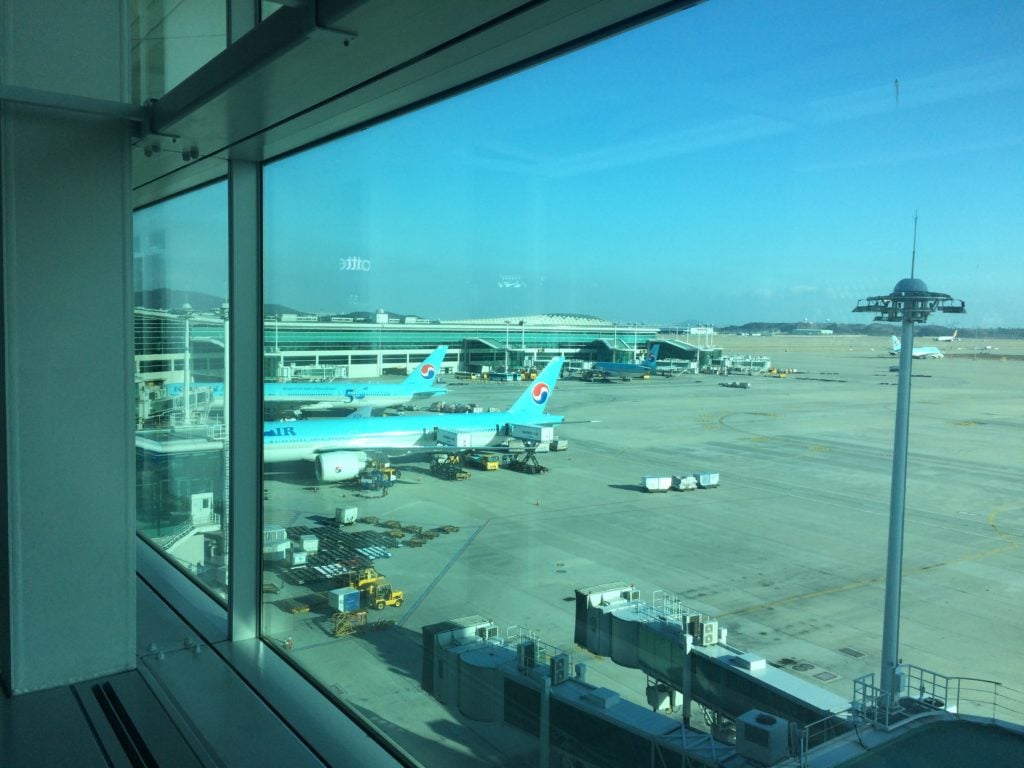 Green screen – pick a custom background (we went with “standing in front of an airport runway, just like the view from a few steps to our right), then plan a pose (random jump), then mess it up repeatedly until the look on the attendant’s face expresses “ok, that’s enough, you’re not 8 years old”, then check your email address to see just how hard you made jumping look. Or feel free to come up with your own embarrassing display.

Now, Time to See the Sights!

As terrific as it can be to spend time in the airport itself, indulging in as many of those outstanding features as you choose, what really separate Incheon from the rest of the pack are their free Incheon Transit Tours. That’s right, if you have enough time between flights, you can take advantage of free tours of sights and attractions around Seoul, giving you a chance to actually experience some of what South Korea has to offer even if you don’t have time for a multi-day visit. 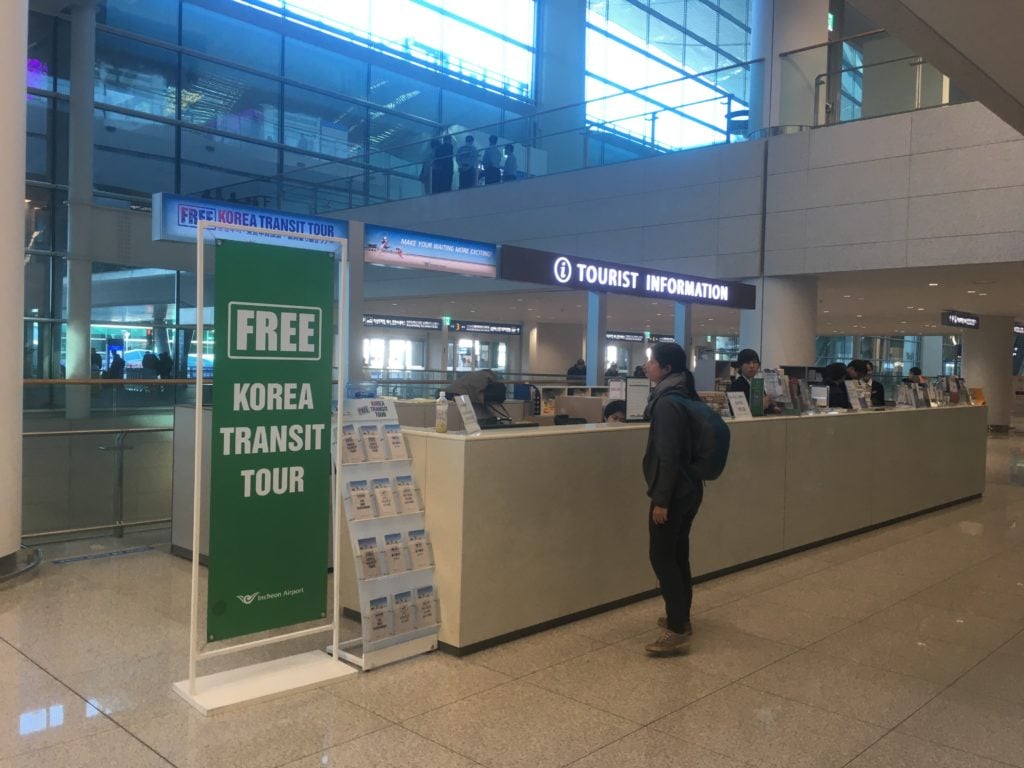 There are several different tours to choose from to fit a variety of interests, and we opted for the “Traditional Tour” leaving at 10 am and returning at 3 pm. You can book them online and I would suggest getting on it well in advance (your flight times pretty much dictate your options anyway) since even a couple weeks ahead we were only able to find space on the one leaving from the opposite terminal. Luckily, however, they agreed to let us join in from Terminal 2 when we stopped by in person that morning. Luckily, because if we had to go to Terminal 1 (a 20-minute bus journey) we would never have made it in time for the 9:40 am check-in time. Even after they made an exception for us we wandered off to the bathroom, returning at 9:42 am to some pointed remarks, giving us a glimpse of the no-nonsense approach of our spunky leader, _______ (I never managed to understand her name). We were quickly briefed, herded and soon found ourselves aboard the bus being strongly encouraged to participate vocally whenever she asked for some enthusiasm, or loudly confirm that “YES!”, we were, in fact, ready for some fun. Her reluctance to sugar-coat things suggested this would be no rose-coloured glasses propaganda tour. When someone mentioned the day’s heavy fog, she immediately corrected them, “Not fog! Smog! Air pollution!” Our first real site of the day. She then went on to teach us how to say “hello” – “annyeong”, or maybe “annyeonghaseyo”. Either way, a version of this came rather naturally to us thanks to years of watching Arrested Development.

Our first stop was at famous Gyeongbokgung Palace, a massive complex of traditional buildings, temples and courtyards that bears many similarities to Beijing’s Forbidden Palace, and was actually built 25 years earlier (apparently before forbidding stuff became so trendy). When we arrived there were already a lot of tour buses there, with more arriving steadily, but the sheer size and openness of the palace easily soaked up the crowds, making it an easy place to wander around. Of course, it was December, and we were bundled up against the cold (2C) and wind (bitter) like we were embarking on 7 years in Tibet rather than a 1-hour stroll around a palace. 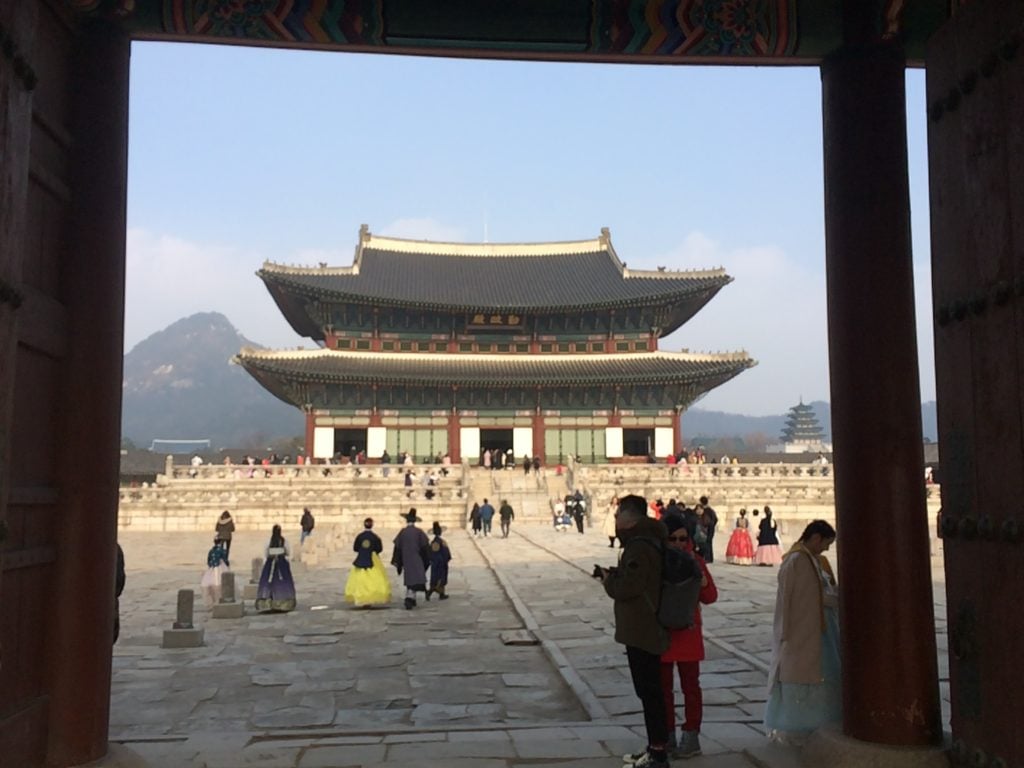 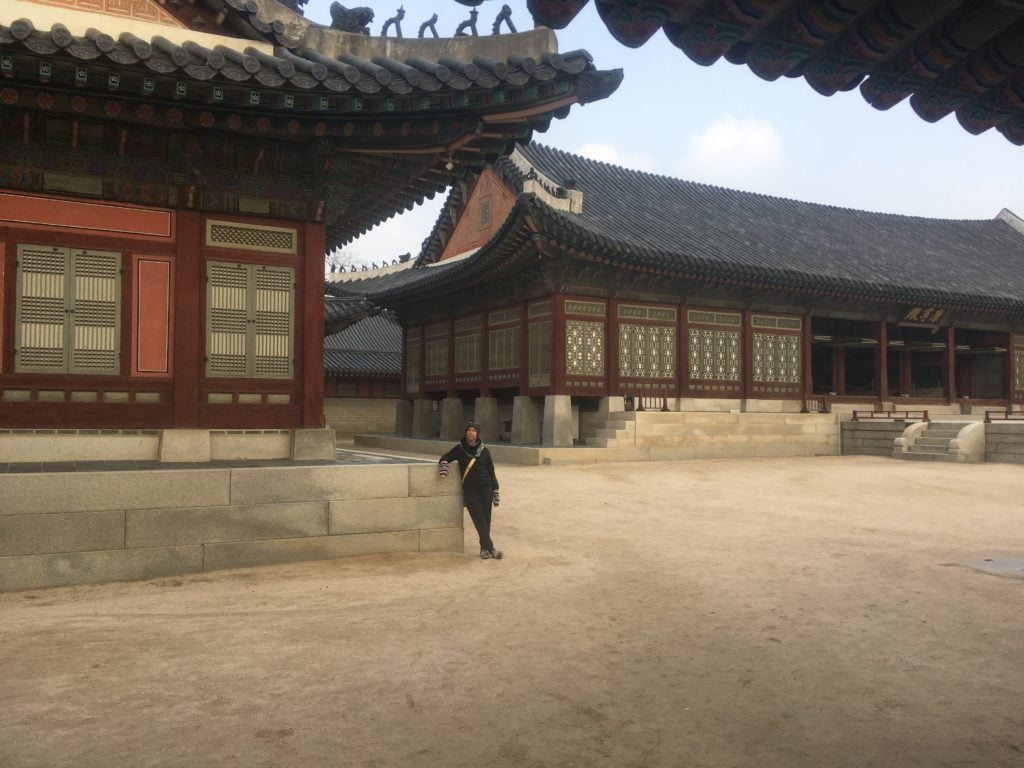 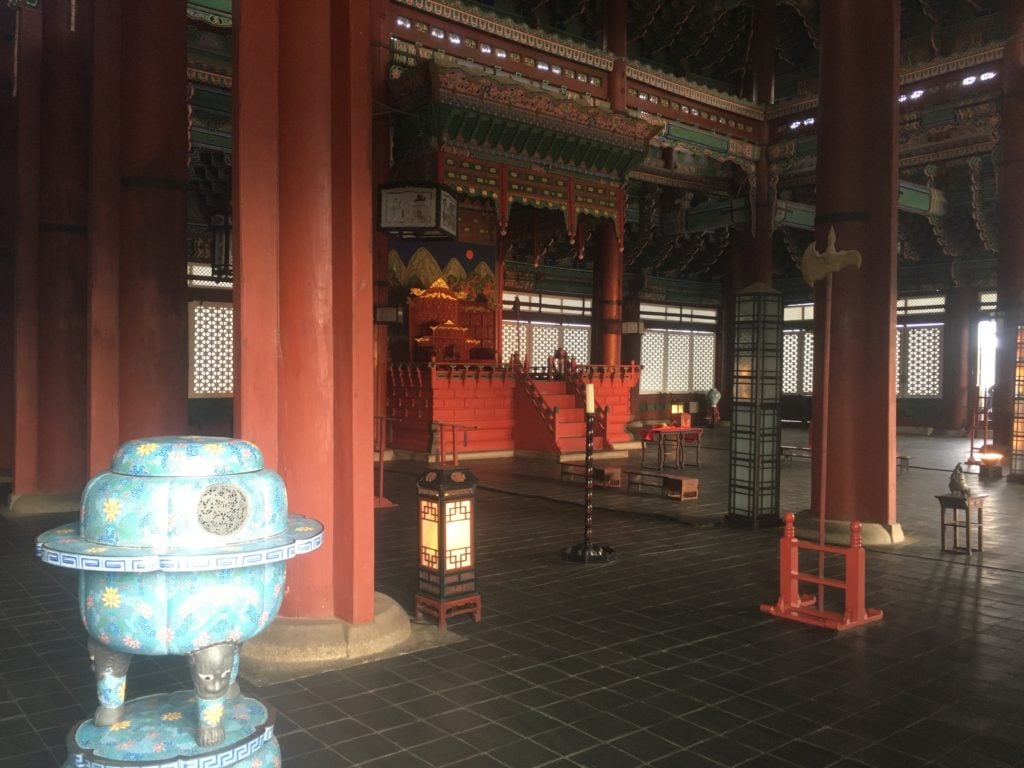 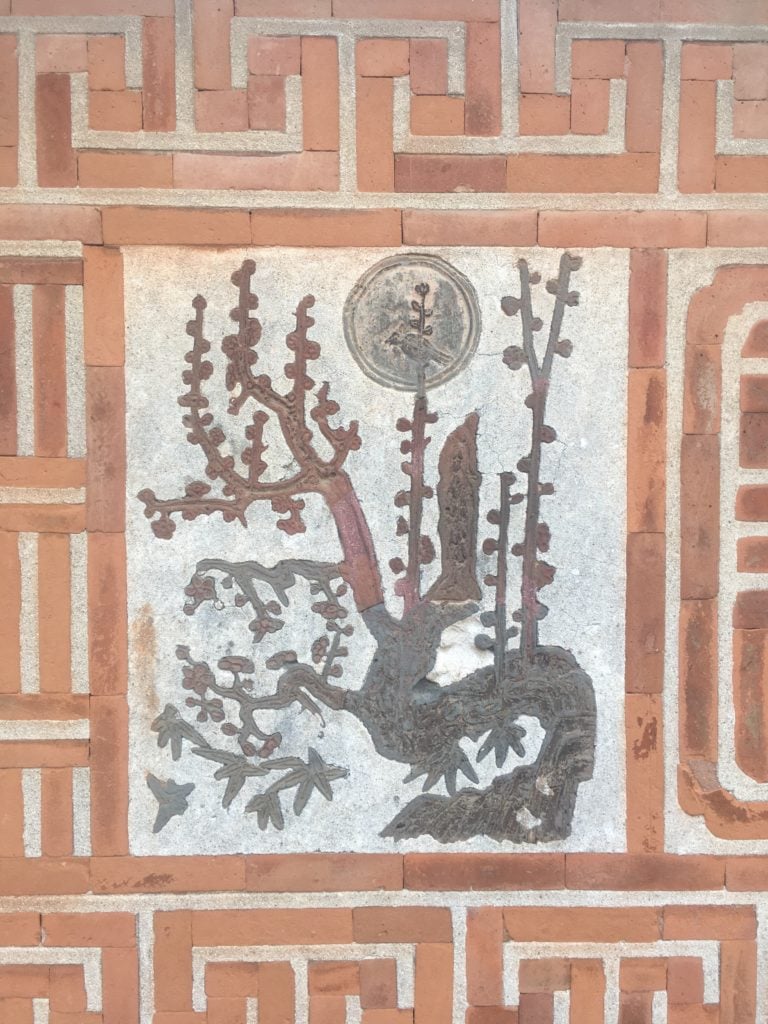 Helpful info: The tour even provides big winter jackets for those coming from or going to warmer climes, which could have been us coming from Sri Lanka if we weren’t still carrying all the winter gear we packed for Nepal.

Of course, while our puffy jackets were certainly practical, they didn’t exactly fit in with the Korean tourists who almost exclusively opted, rather alarmingly, to dress in traditional clothing from that historical period. Big, lacy dresses for the women and silk robes and stove-pipe hats for the men (still Nikes for all, though). These costumes were so popular there were even places just outside the palace renting them out (although, obviously, having your own elaborate silk robe and goofy hat is the more practical choice in the long run). It was like we stepped back in time in an extremely dull sci-fi movie. 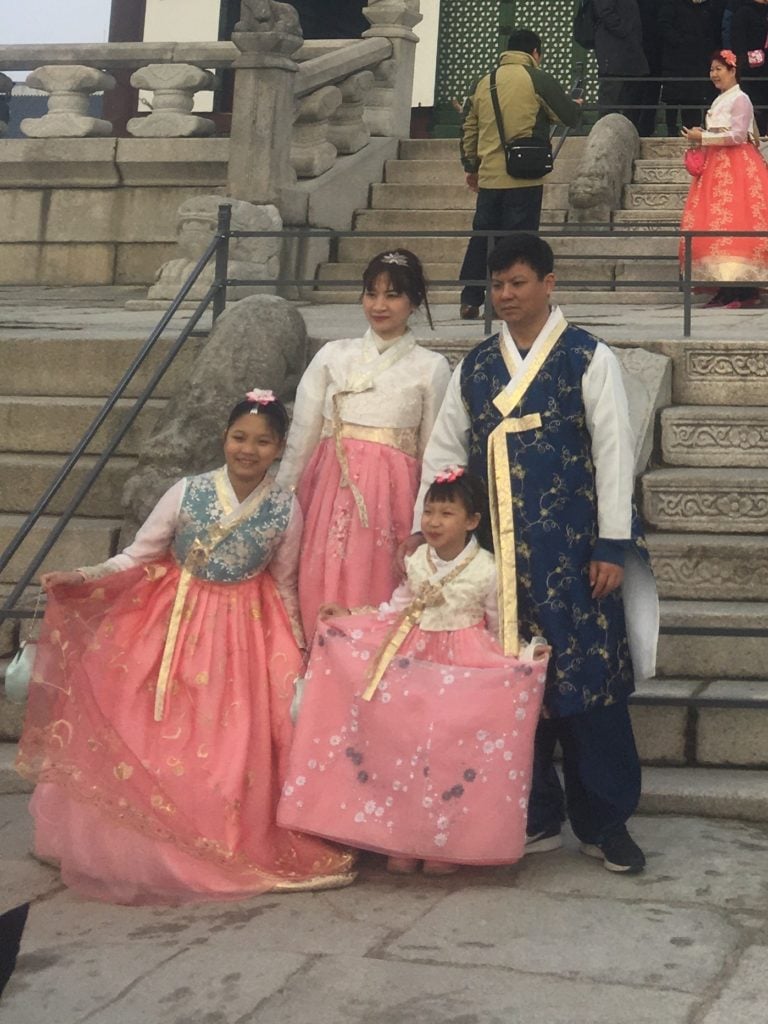 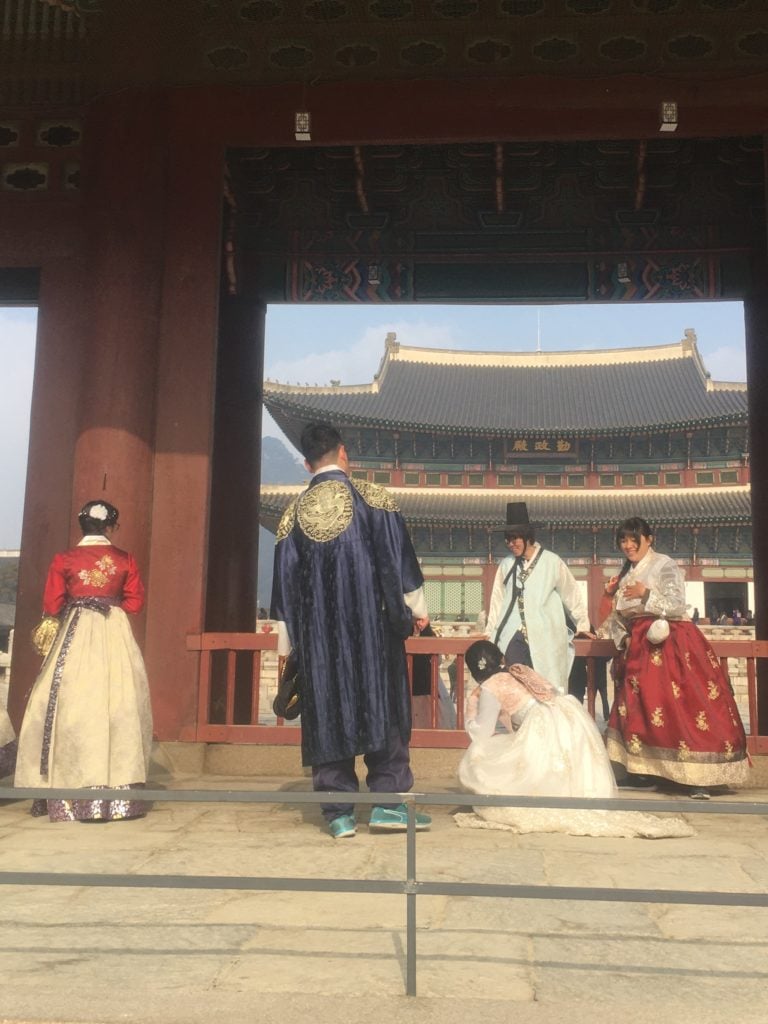 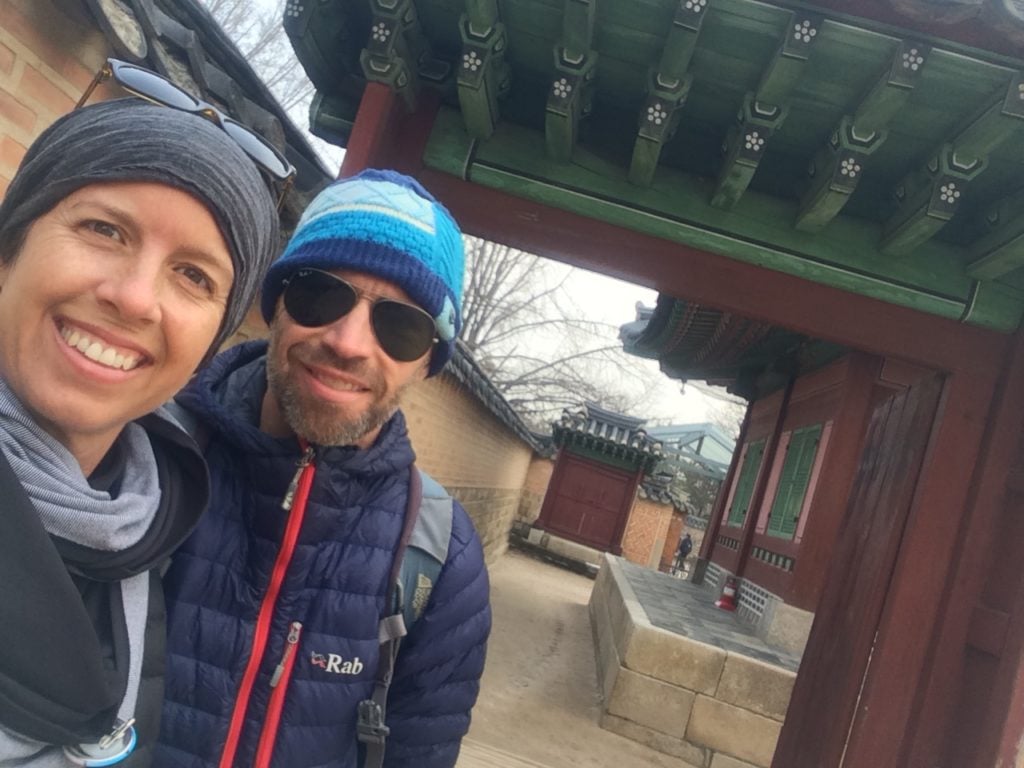 After the palace, we re-boarded the bus for a short journey to the classic tourist area of Insa-Dong, famous for its narrow alleys, traditional food and unnecessary shopping. Lunch was at a typical Korean restaurant offering conventional historic choices such as “bibimbap” (rice, vegetables, egg, chilis) and beef noodle soup. As great as the food options were, though, I think everyone would agree that the highlight was watching me re-acquaint myself with chopsticks, then (sort of) using them to eat thin noodles. Certainly no one accused me of eating too quickly. 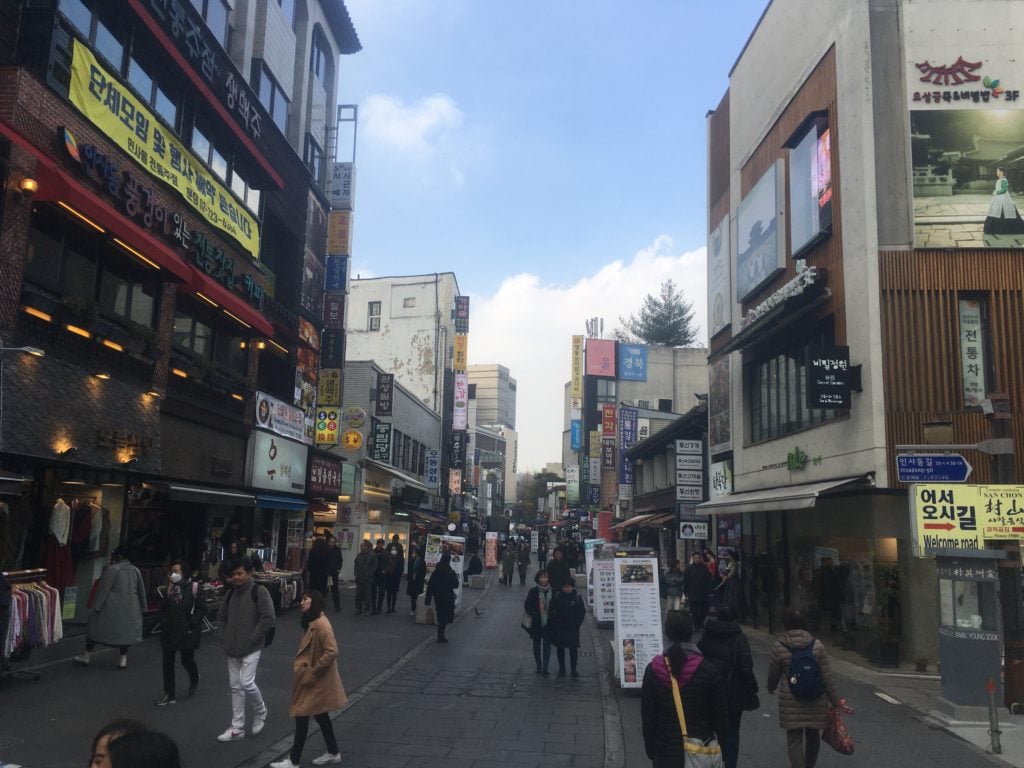 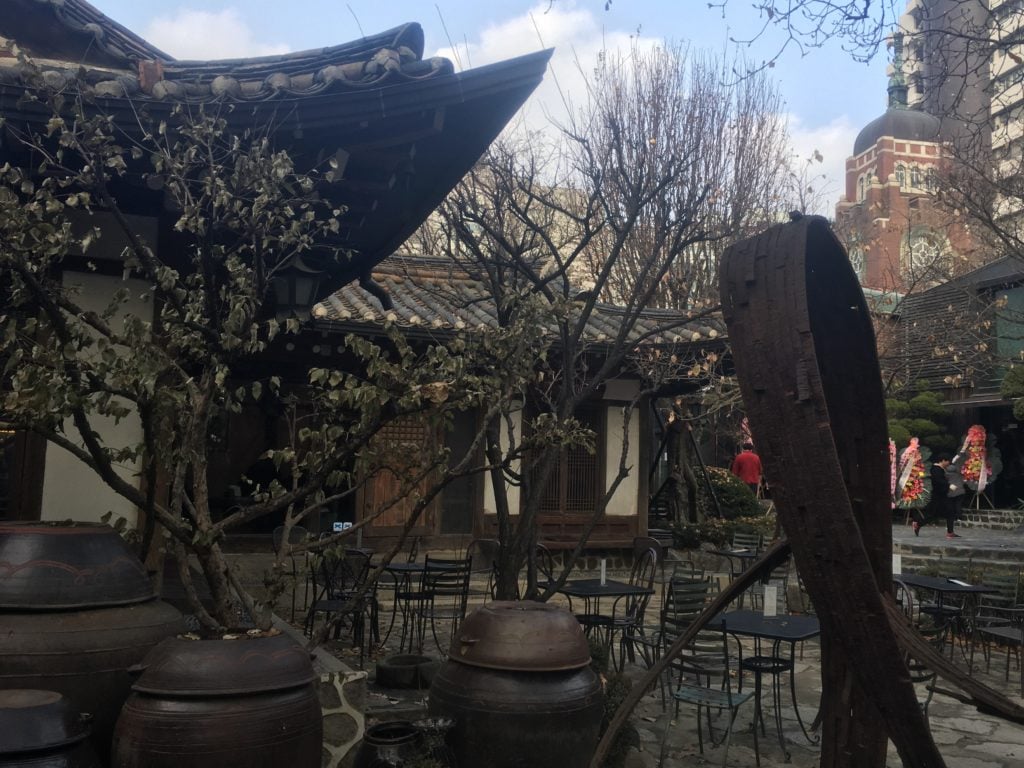 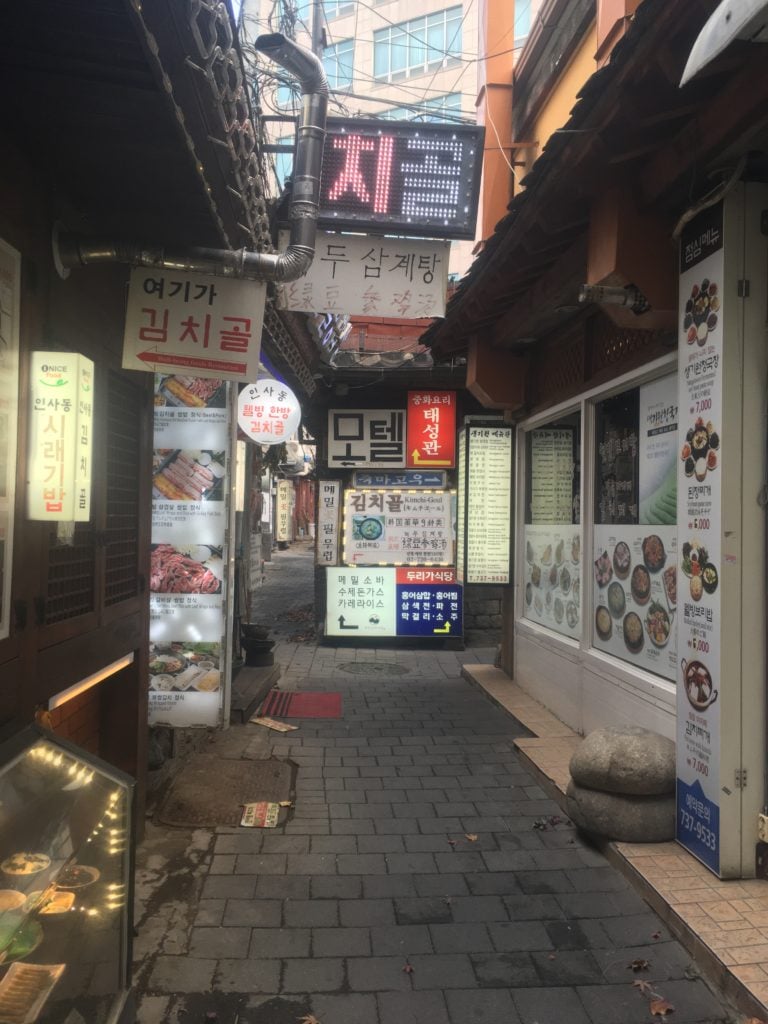 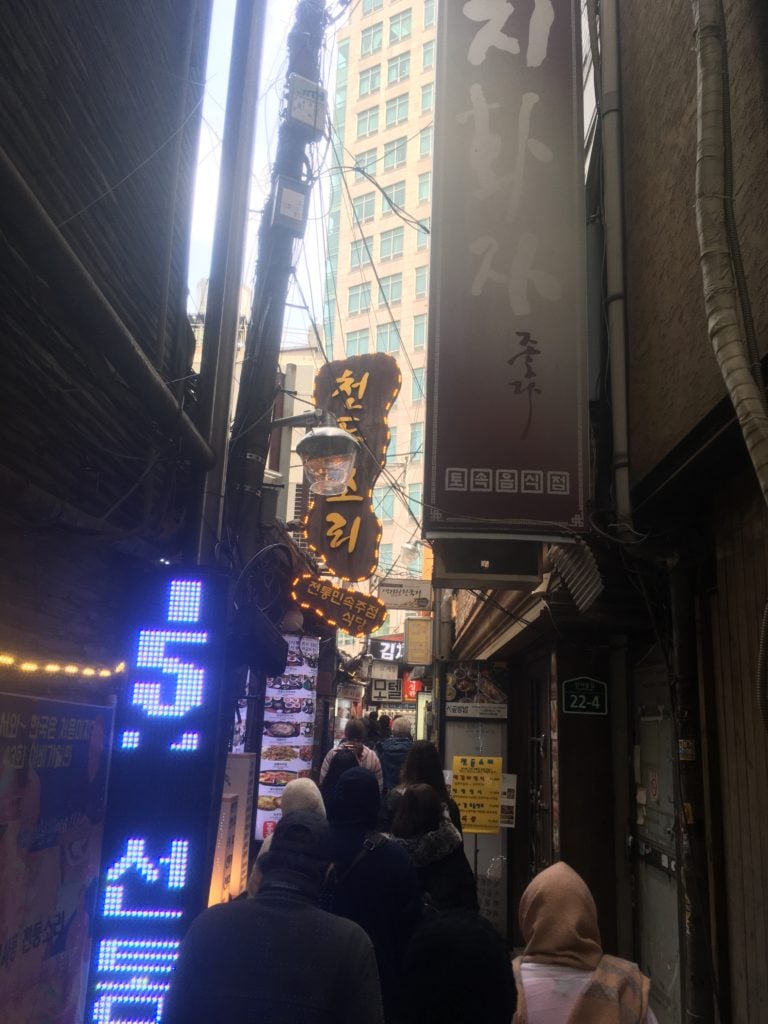 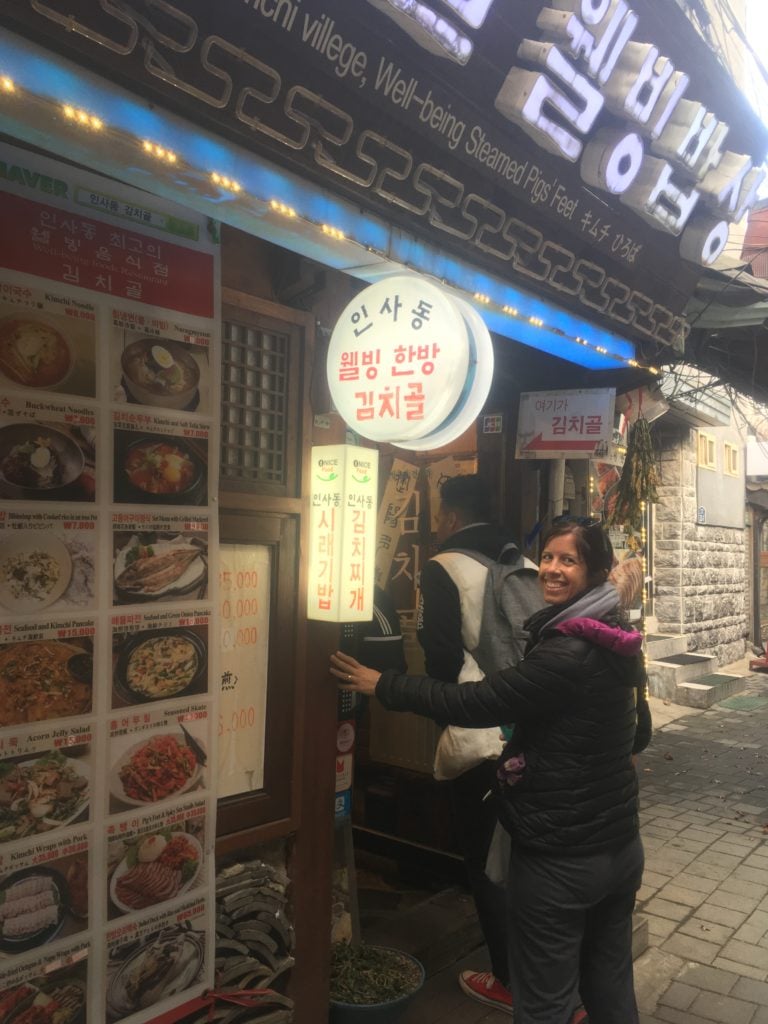 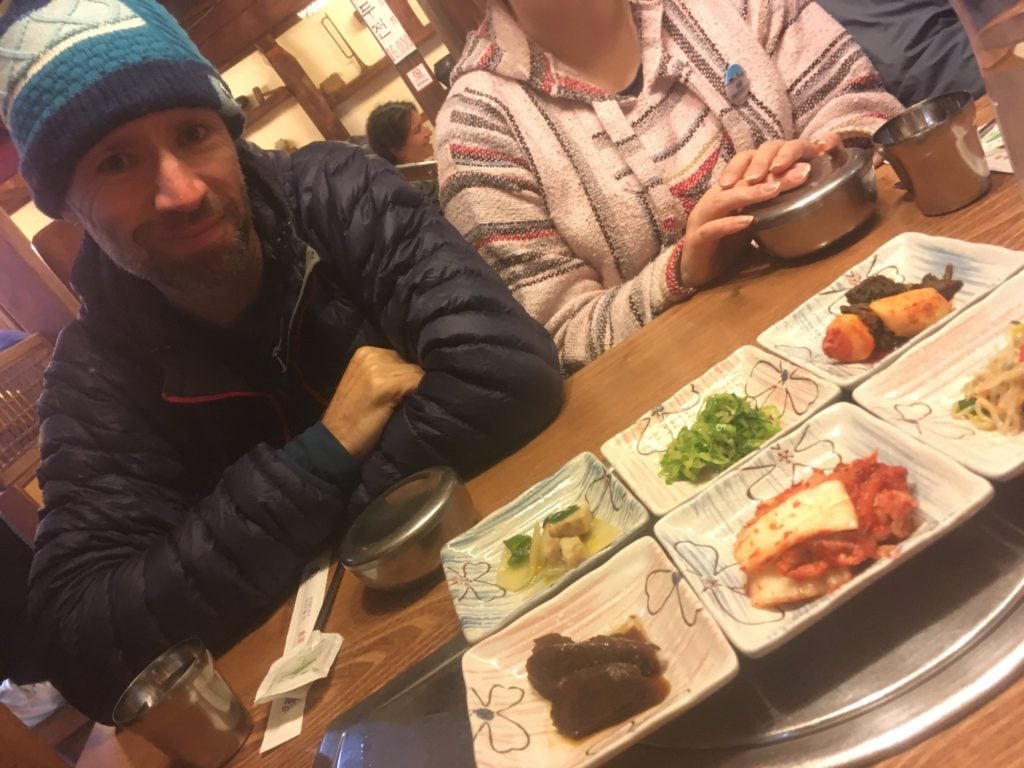 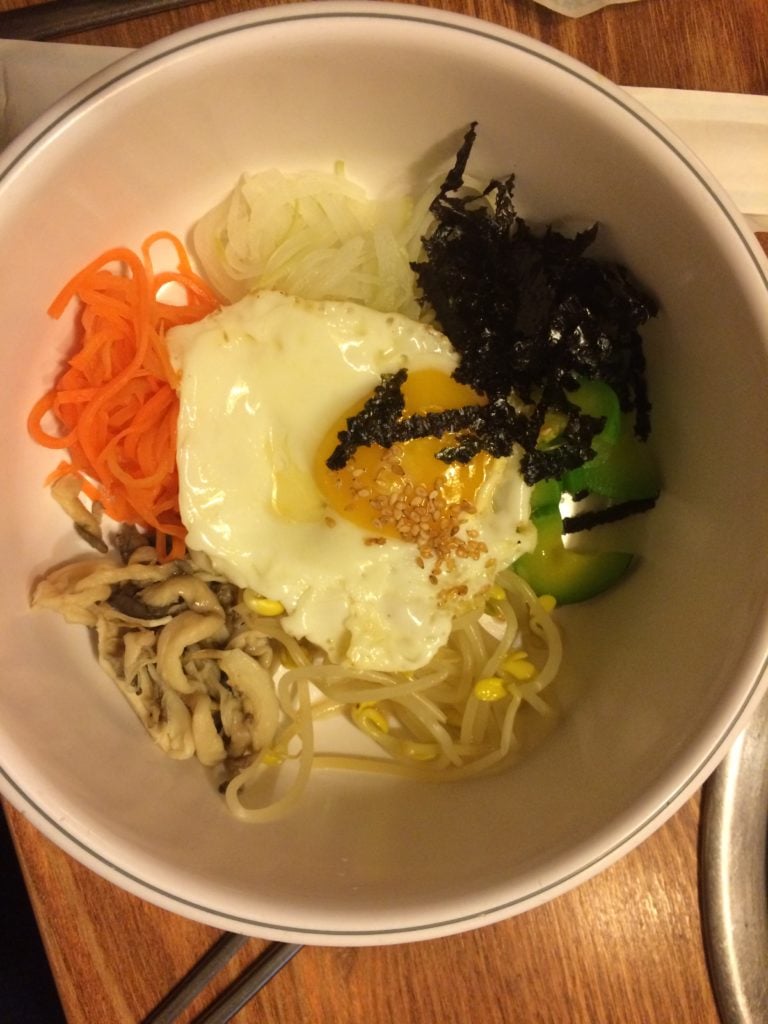 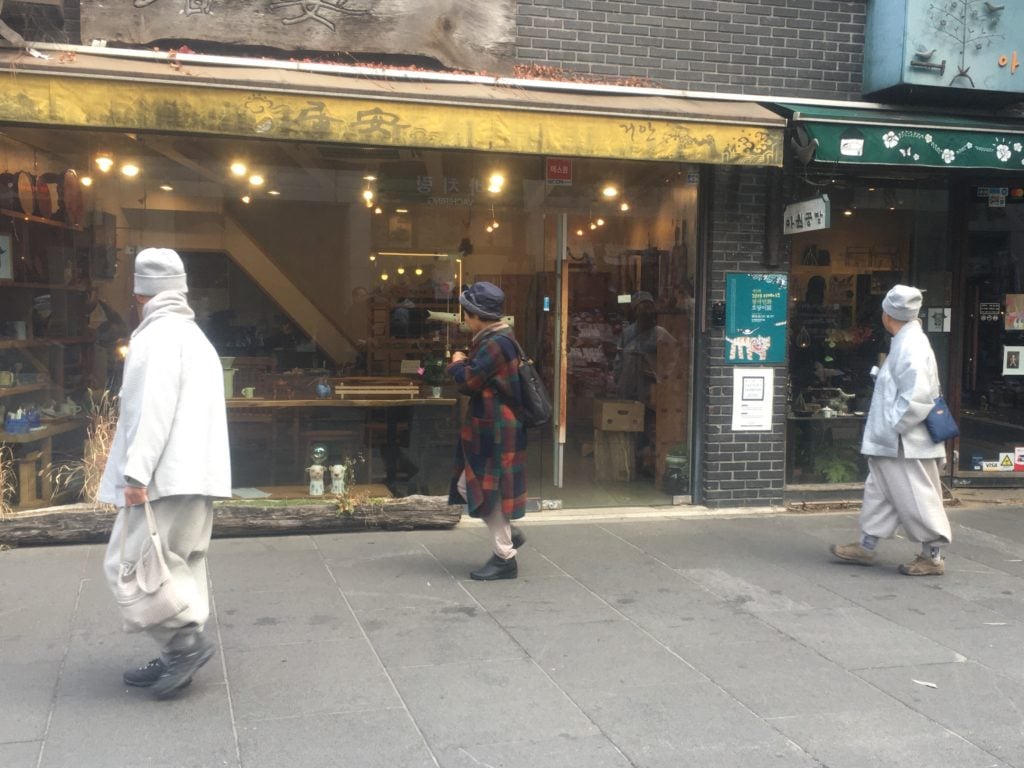 Bottom line, planning your trip to include a lengthy layover in Seoul is well worth the added time. Besides taking in all the fascinating alternatives of Incheon International, having the opportunity to join free tours and actually see some of the city in a limited time frame is the truly unique part of the whole adventure.

This post contains affiliate links. They do not affect prices but we earn a commission if they are used to book something or make a purchase.