There we were, planning our merry way from western Canada across the Atlantic to our much-anticipated and world-famous Tour Mont Blanc hike and, not surprisingly, Paris popped up as a mandatory stop. The same Paris we count as one of the nicest cities we’ve ever visited. Plus, 24 hours in Paris would fit in well with some of the retro stops we have planned this fall – one night in three of our favourite cities – Paris, Venice and Dubrovnik. Plus, a short stay in one of our new favourites, Copenhagen. 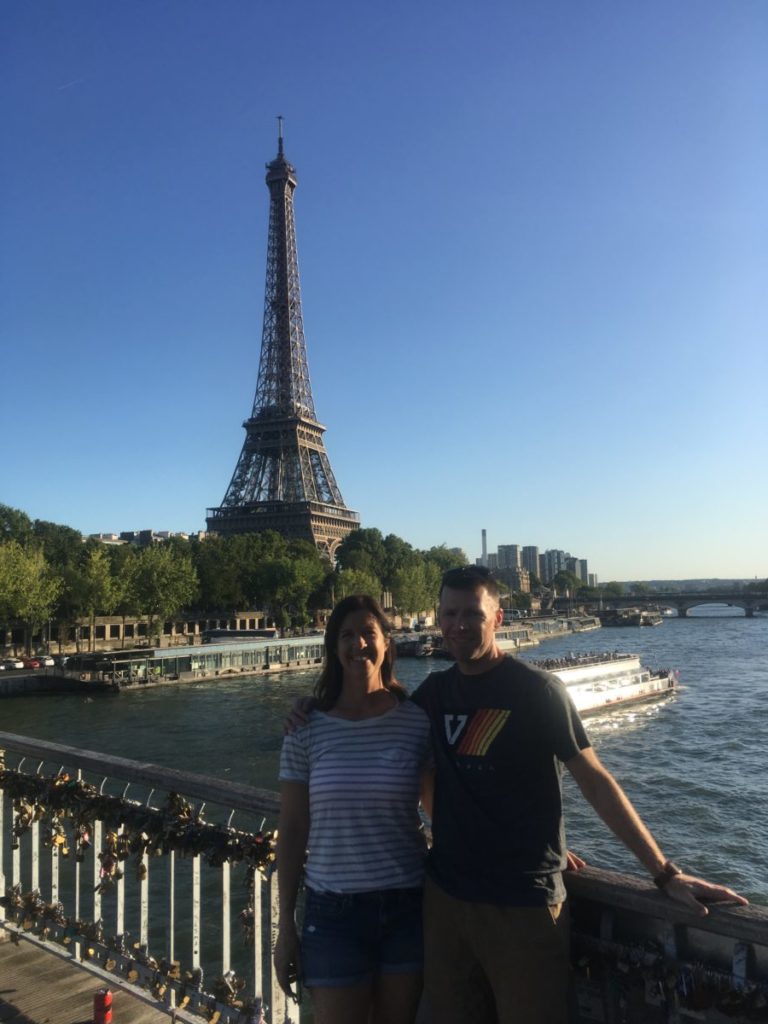 So, even though we were on a bit of a tight timeline (fitting in a mountain hike best tackled in summer with a desire to squeeze as many days as possible out of our own summer back home) we knew we had to sneak in at least one night in “The Saskatoon of Europe”. Which meant it was all about efficiency…

Here is our list of best things to do in Paris, along with some tips to make the most of your 1-day layover:

How to get to Paris from Charles de Gaulle airport

There are multiple reasons that Paris is the starting point for any ideal France itinerary. First of all, it’s fairly amazing. Second of all, there are a LOT of international flights coming and going from Charles de Gaulle airport. It only makes sense to start and/or end your trip.

One of the reasons we were willing to take on such a short stay is just how easy it is to get into central Paris from the airport. Obviously, there are all the usual options (taxi, private shuttle, bus, friend who owes you a big favour) but for us, and most backpackers, the metro is the perfect solution. 10 euro per person is a bit steeper than normal for a metro ticket but it takes you straight from the terminal (take a left outside the baggage terminal and follow the signs near 2E to RER B, platforms 11-12) directly through the centre of the city. In our case, we didn’t even have to change. Get off at the 14th stop (Luxembourg), walk 4 blocks and there we were, at Hotel de Suez. 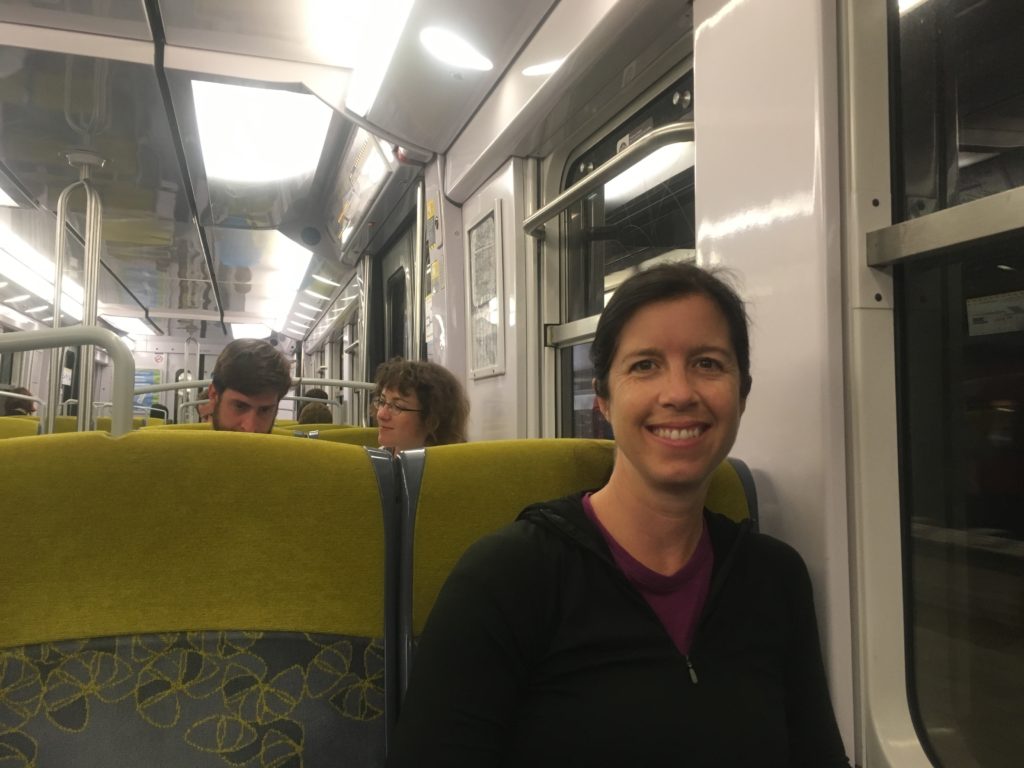 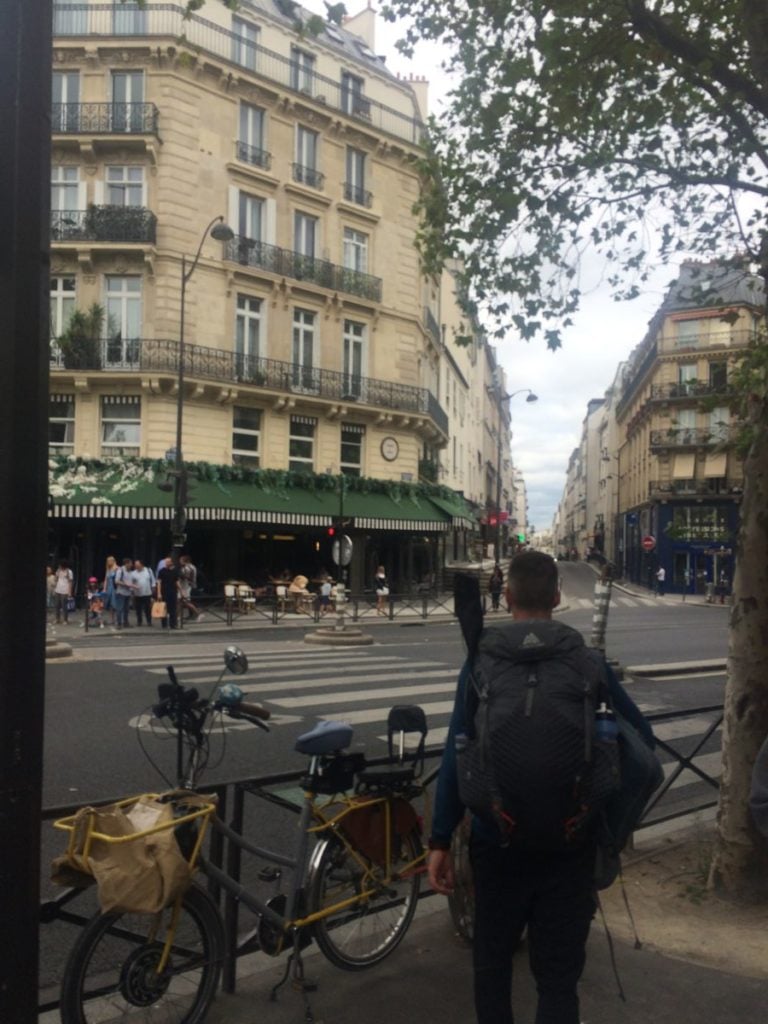 This classic old hotel was a great deal, less than 100 euro right in the heart of the Latin Quarter, one of the most famous of the 20 arrondissements in this already famous city. Sure, it’s not shoestring-India-cheap or anything like that, but for downtown Paris one must raise the bar slightly.

As always, I like to stress the advantages of booking ahead. In these days of loyalty discounts and free cancellation, it simply doesn’t make sense to leave your hotel/apartment to chance at the last minute. Plus, any time you spend searching for a room is time not spent enjoying the sights. Usually the further ahead you book the better deal you’ll get. We use mainly Booking.com, as we did in with Hotel de Suez, and AirBnB, and the ability to search for places using their maps is perfect if you’re like us and focus on location first and foremost. Depending on the length of stay, apartments are an economical choice if you don’t mind having a few meals in. 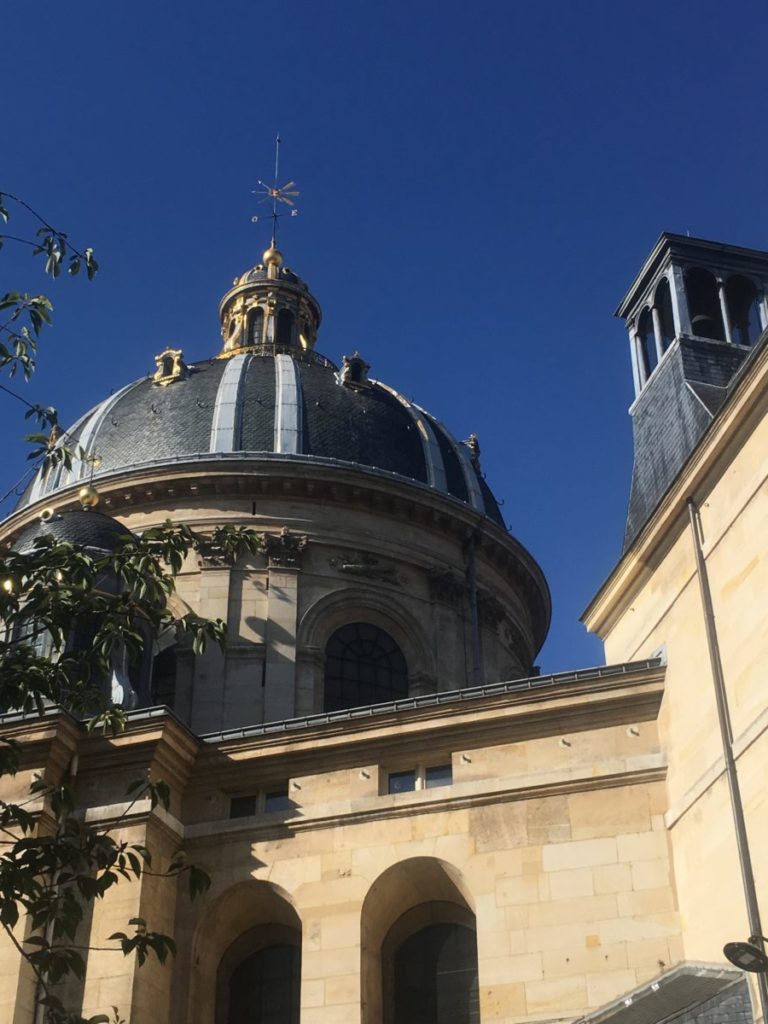 You can, and should, drink the tap water in Paris, and most restaurants will bring you a glass of tap water if you ask.

With almost exactly 24 hours until our bus to Annecy the following day, we opted to forgo any unpredictable new targets and just focus on our previous favourites, seeing them thoroughly and from new angles, all on foot, while still doing what we could to get away from the worst of the crowds. Paris is a terrific walking city, with wide sidewalks, plenty to see along the way (to anywhere), loads of quirky things to do and always there is the refreshing openness and picturesque bridges of the Seine close by.

This was the first time we have made it to Europe in August, so we were concerned about the craziness of the tourist crowds but in Paris, as in most places, it doesn’t take going more than a block or two off the main route to avoid the bulk of the crowds and get back to soaking in that indefinable Parisian charm. And if that doesn’t convince you, run through this list of best Paris travel quotes.

We were also lucky to have arrived on a beautiful, sunny day, although we know from past visits that Paris on a rainy day is still more impressive than most cities in the sun. 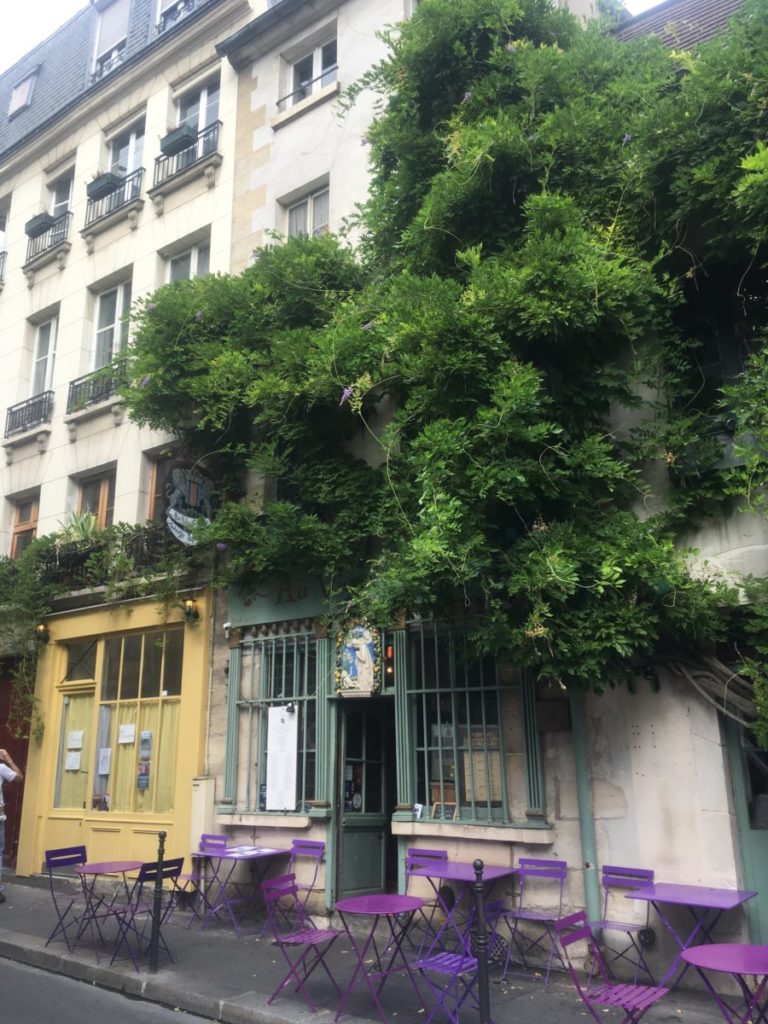 As good a place to start as any, although I can’t imagine I’d enjoy swimming in it, nor using it to mix a drink, this famous waterway sure takes a pretty picture. With a vast array of scenic bridges, popular picnic/wine areas and always another amazing sight to be found along its shores, you could do worse than spend most of your time near the Seine. Grab a baguette, ham, some French cheese and your drink of choice and join the quietly picnicking crowds along the lower paths at sunset. We were feeling lazy and opted for cheap takeout pasta, but you get the idea… 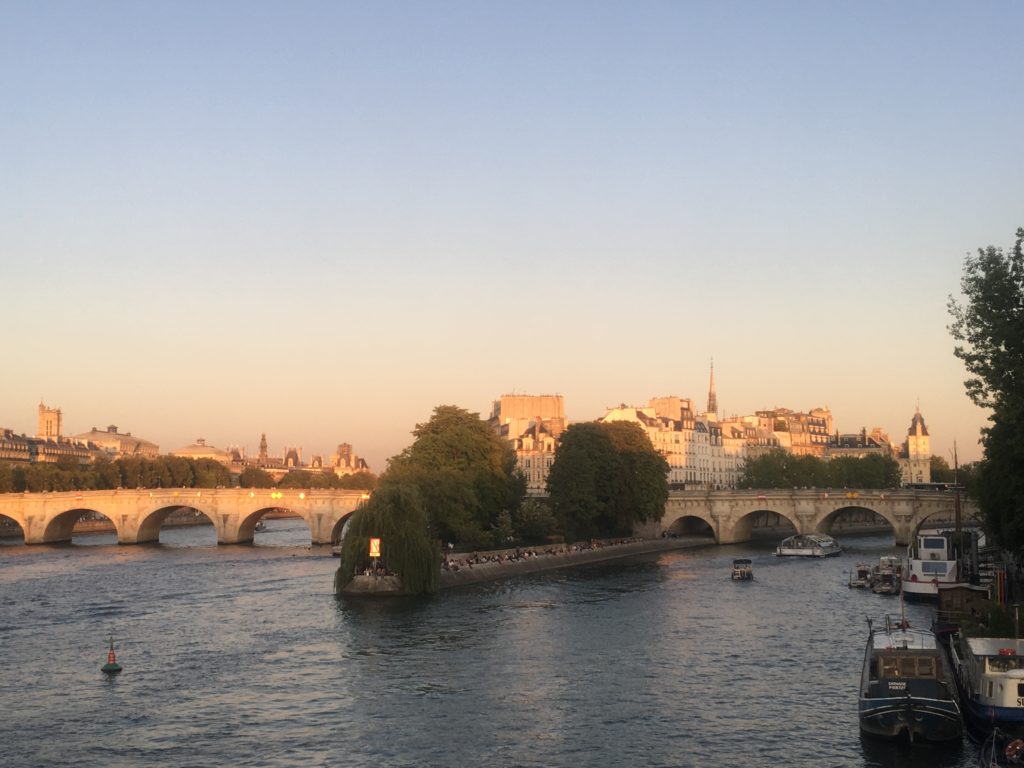 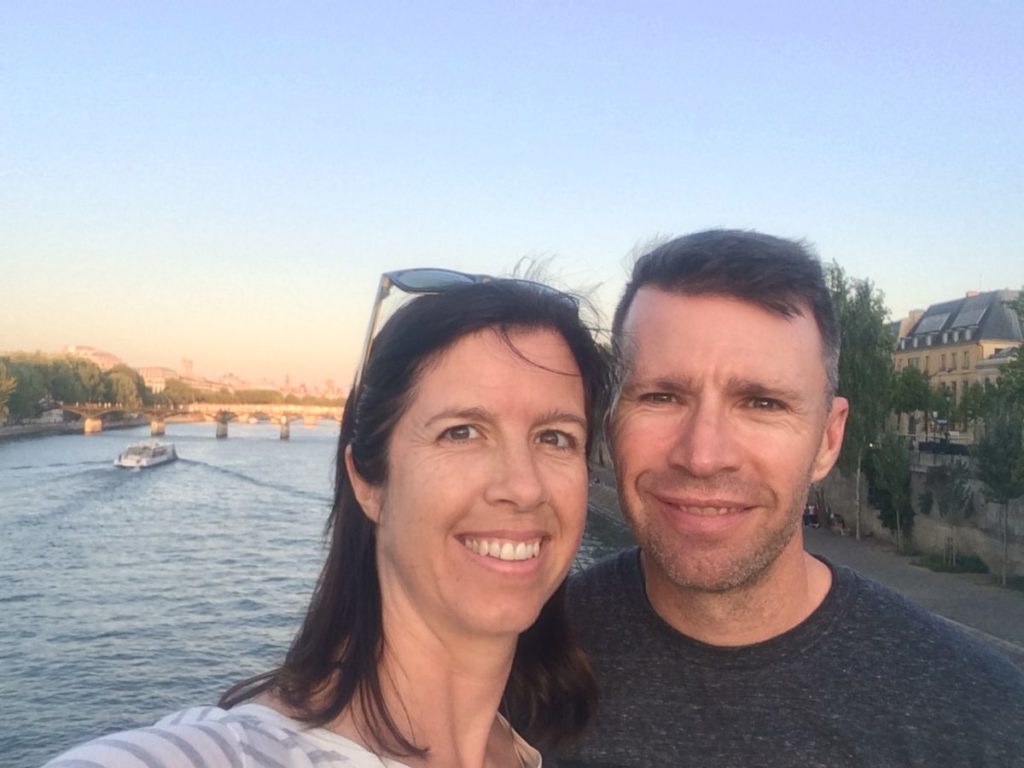 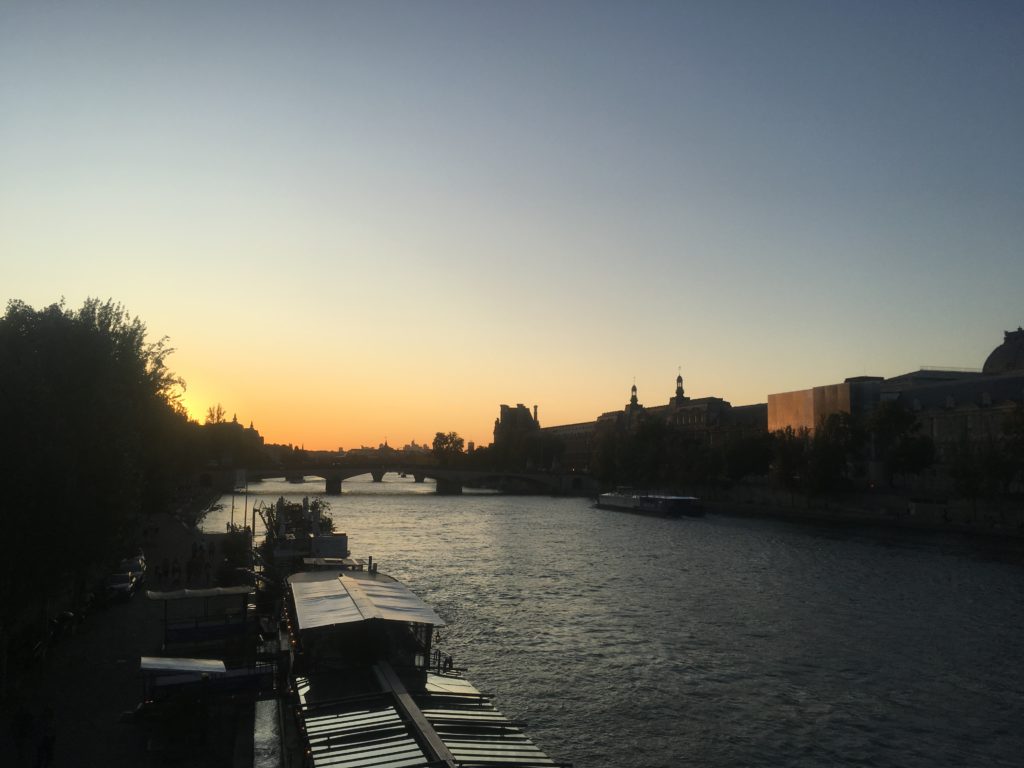 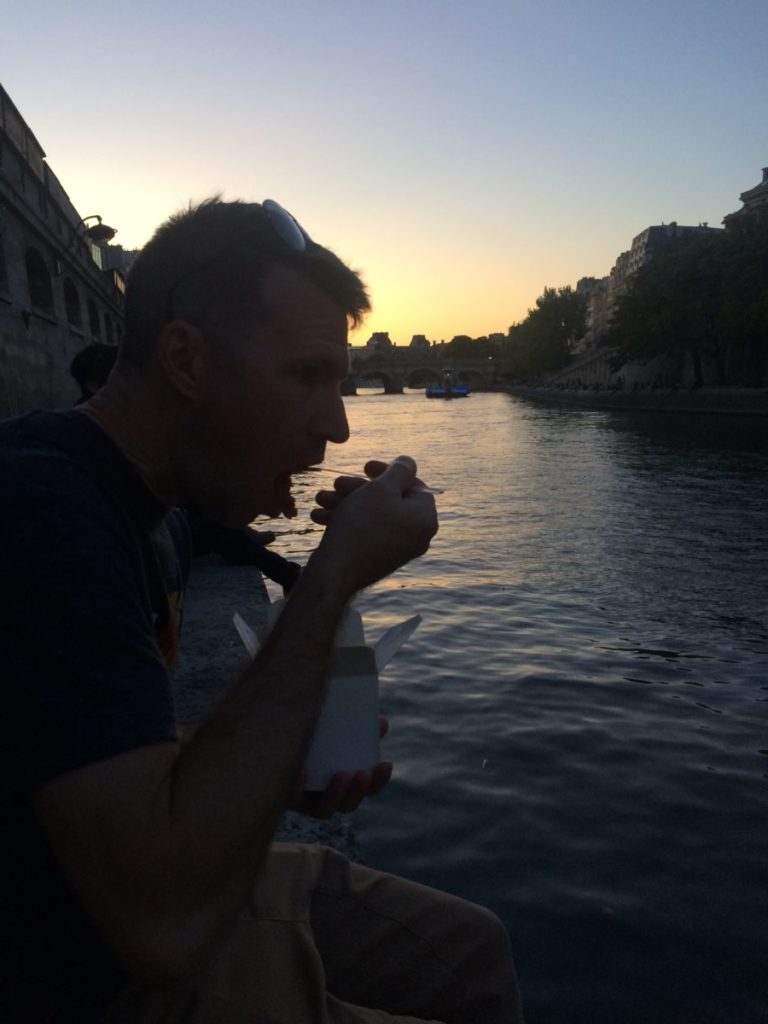 This iconic Parisian emblem is physically incapable of taking a bad photo, yet there are a few pretty cool spots that are (slightly) less popular than just staring up from the base of the tower. While those are always great, and you can’t go wrong with a shot of you drinking an overpriced park beer while lying on the grass (plan ahead and pick up a couple in a nearby grocery store first), these others also provide some unique angles. A streetscape with a classic Parisian café in the foreground, a side angle bridge shot, one with a houseboat, bridge and maybe even some bikes, then using the famous fountains in the Jardins du Trocadero directly across the river to create endless photographic possibilities. From Pont Alexandre III you are supposed to pour a bit of water on the metal handrail to create an Eiffel reflection, although I can’t say that we quite figured out the exact spot. Worth a look, though. 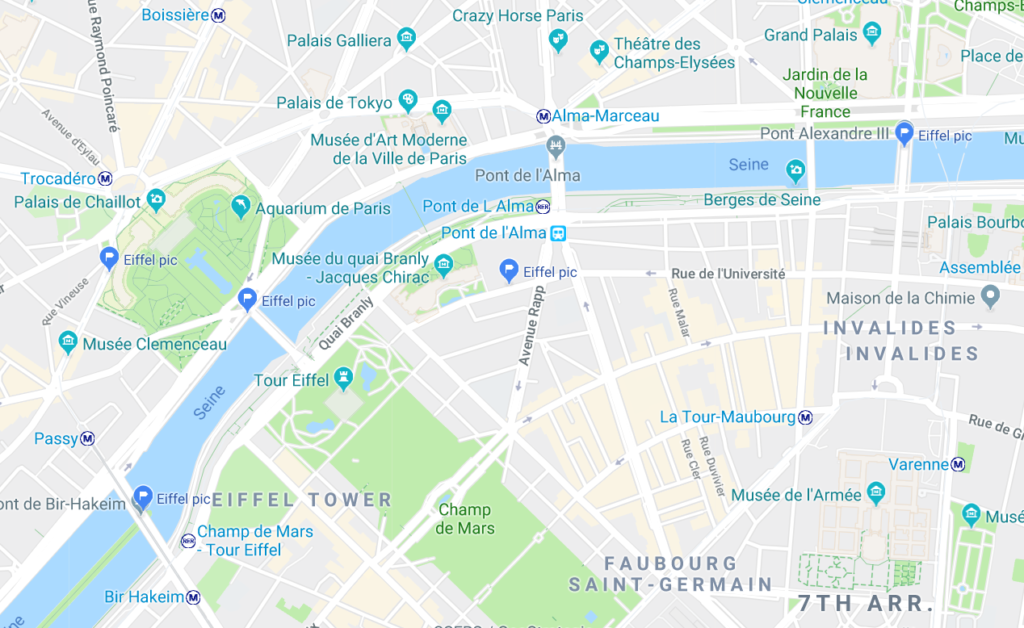 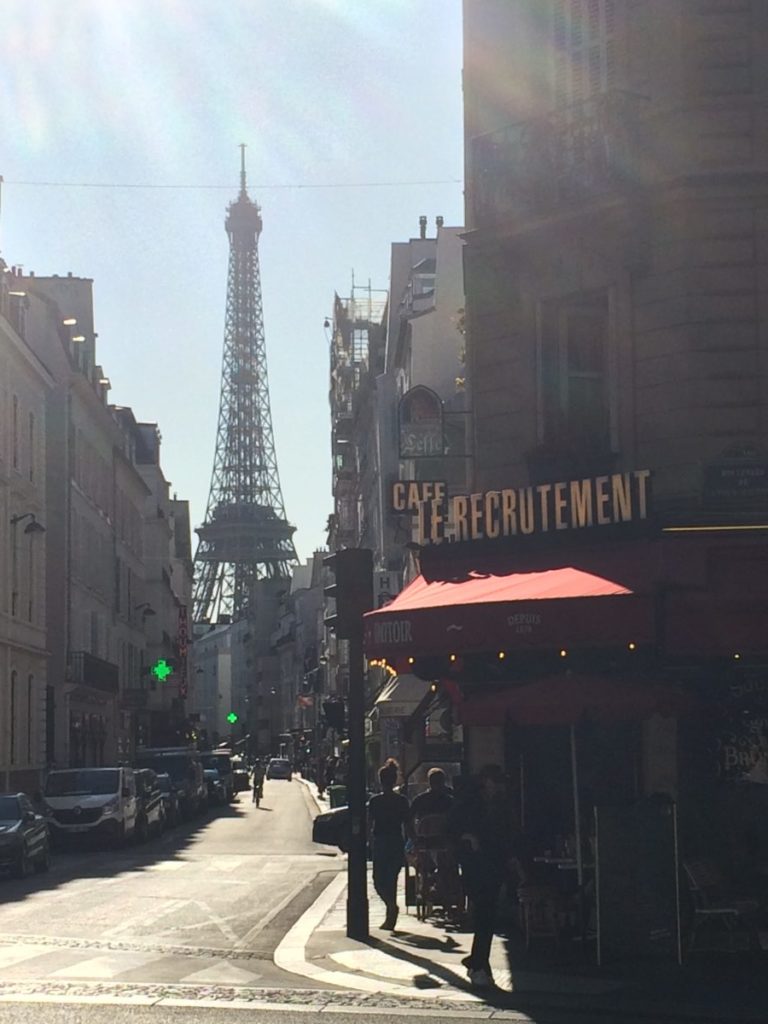 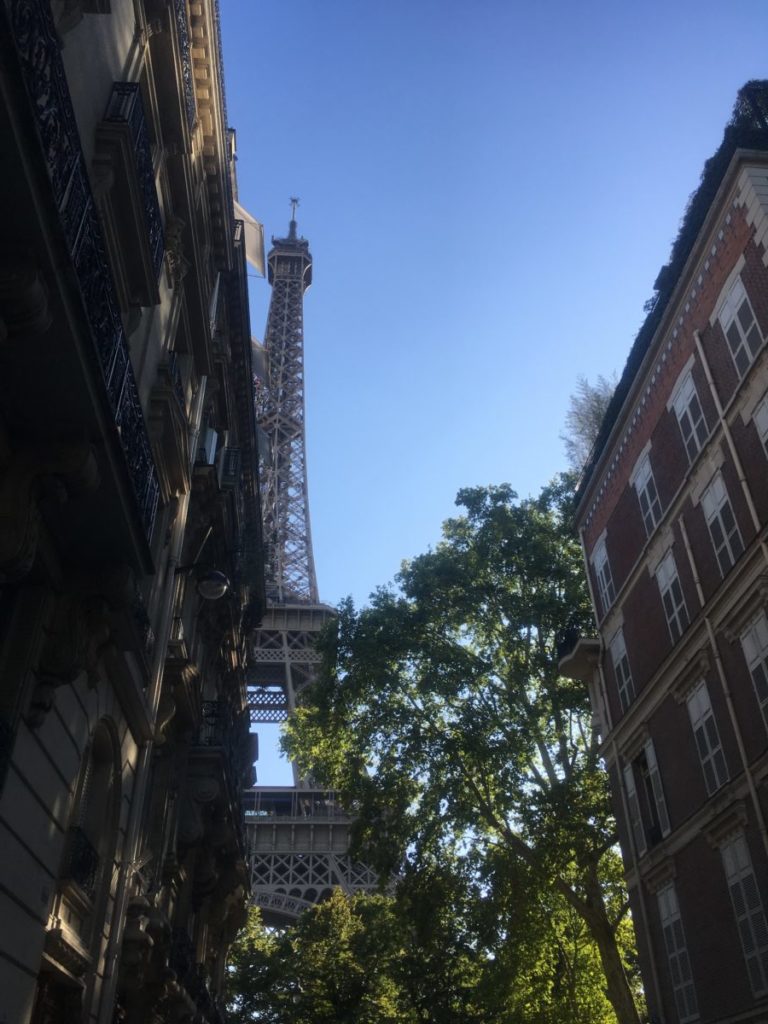 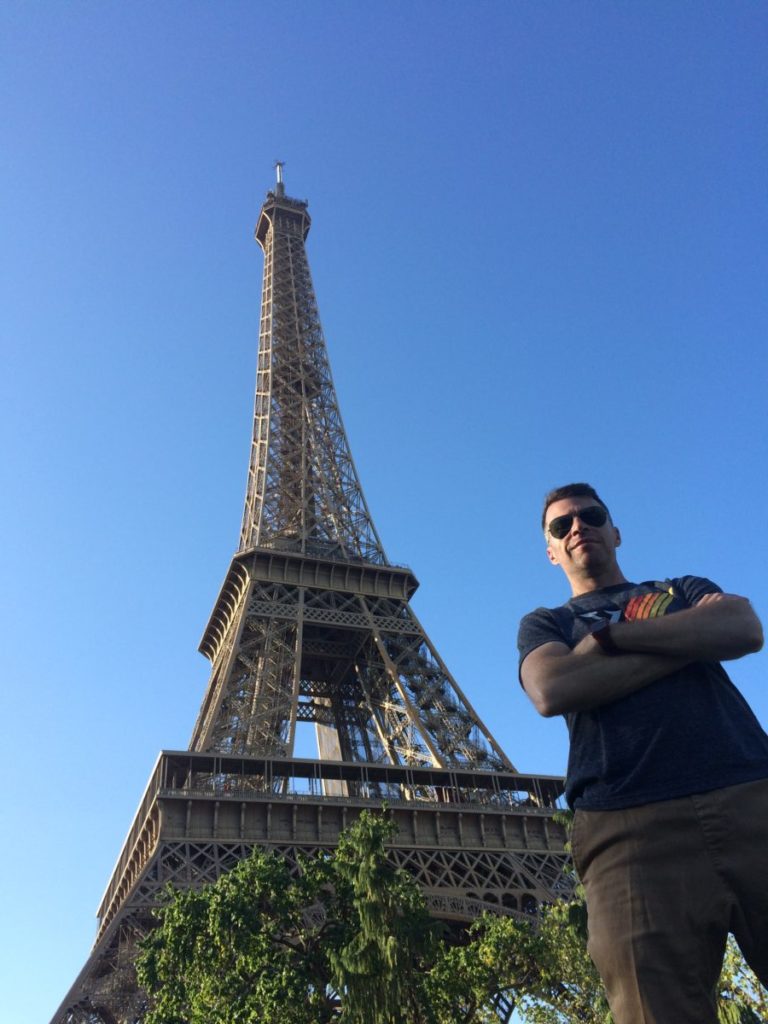 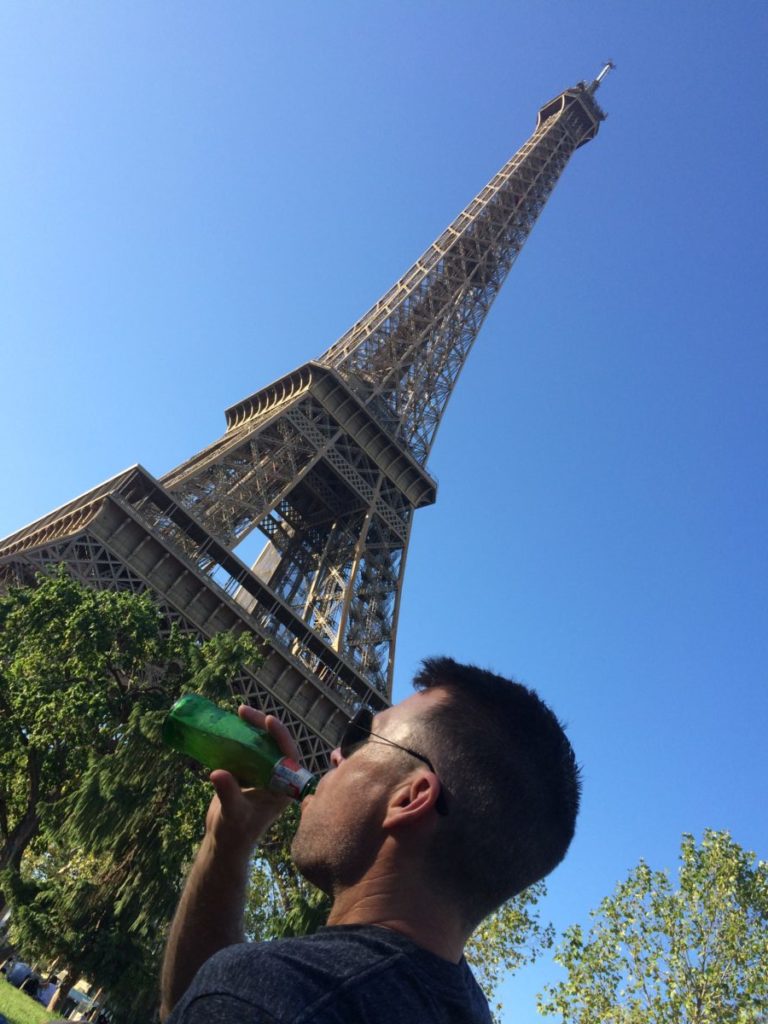 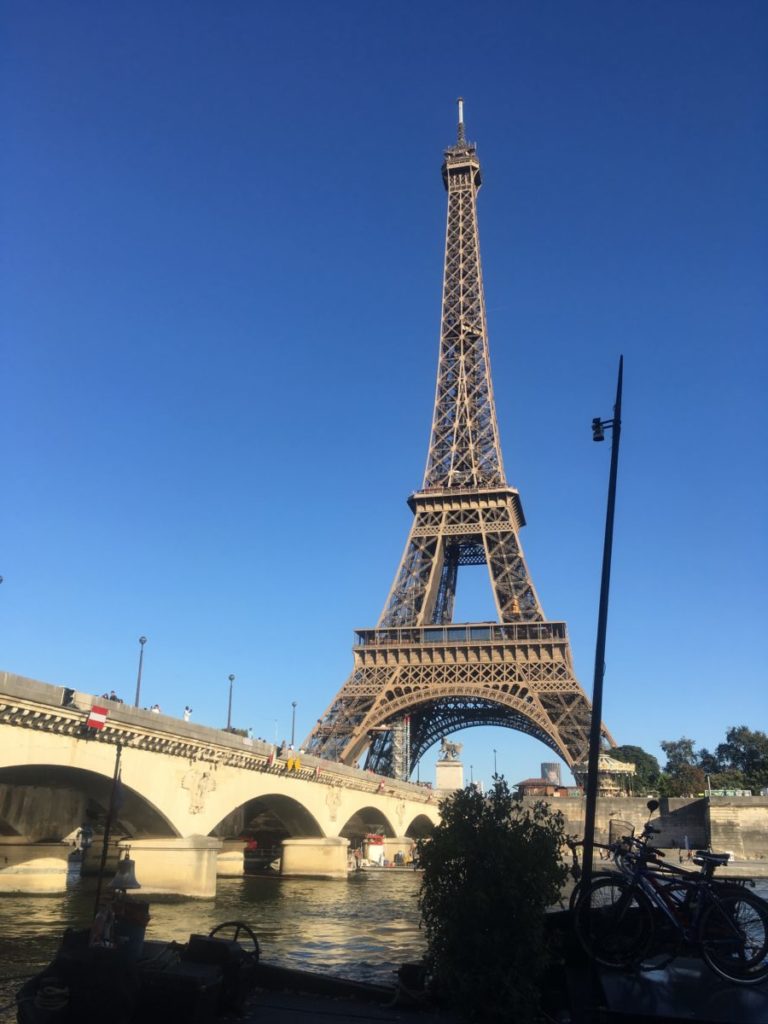 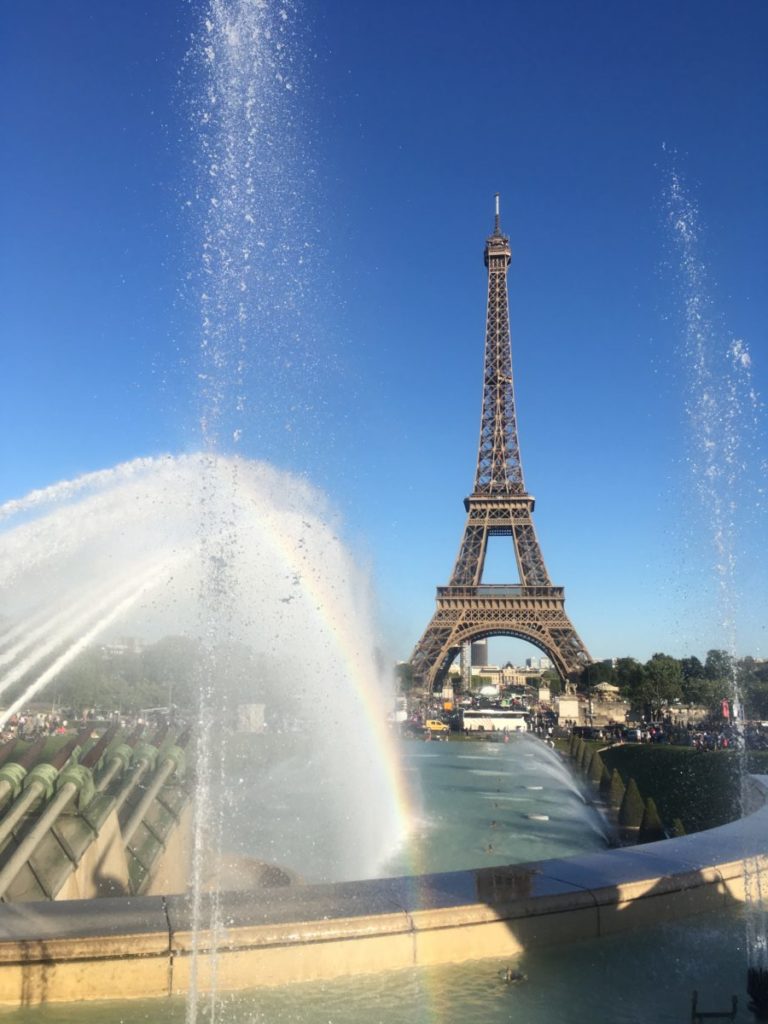 Also, even the most diligent planners and packers end up forgetting something that only comes to mind once they’ve reached their destination. So, if you happen to show up anywhere within a 2-kilometre radius of the tower and suddenly realize that you completely forgot to bring along your tacky, plastic Eiffel Tower replica, well, don’t panic. Keep your eyes peeled for one of the three to four thousand African men selling them in large quantities off blankets on the sidewalks. Feel free to pick up a novelty key chain while you’re at it, just in case. 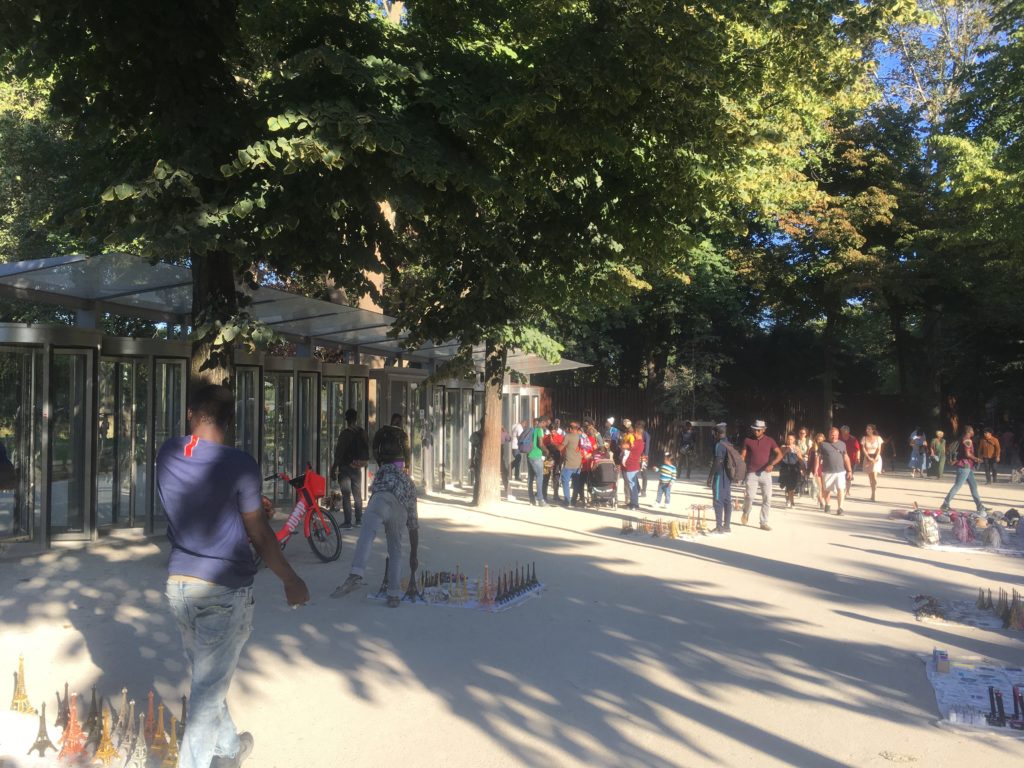 Yeah, I know, real surprising. But instead of focusing on all the incredible masterpieces held inside, skip the Eiffel crowds at sunset and spend a bit of time using the classic pyramids to play with the light of the setting sun and spray of the fountains. Or, if you’re like some Parisians, just use the fountains as an easy place to wash your dog. 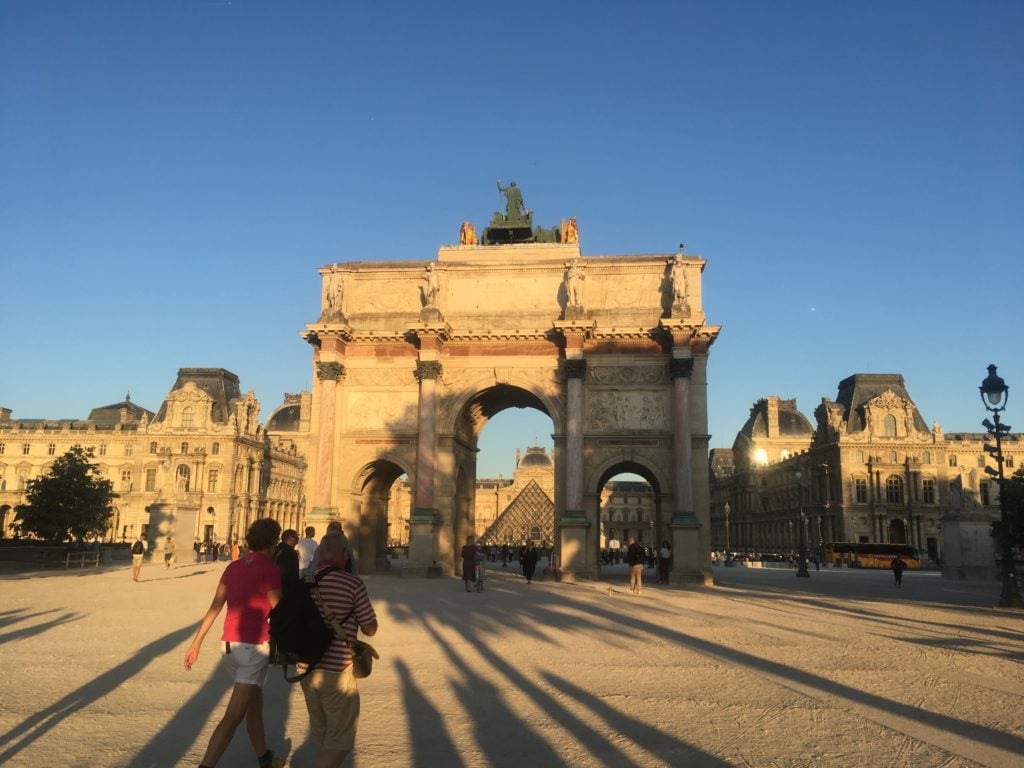 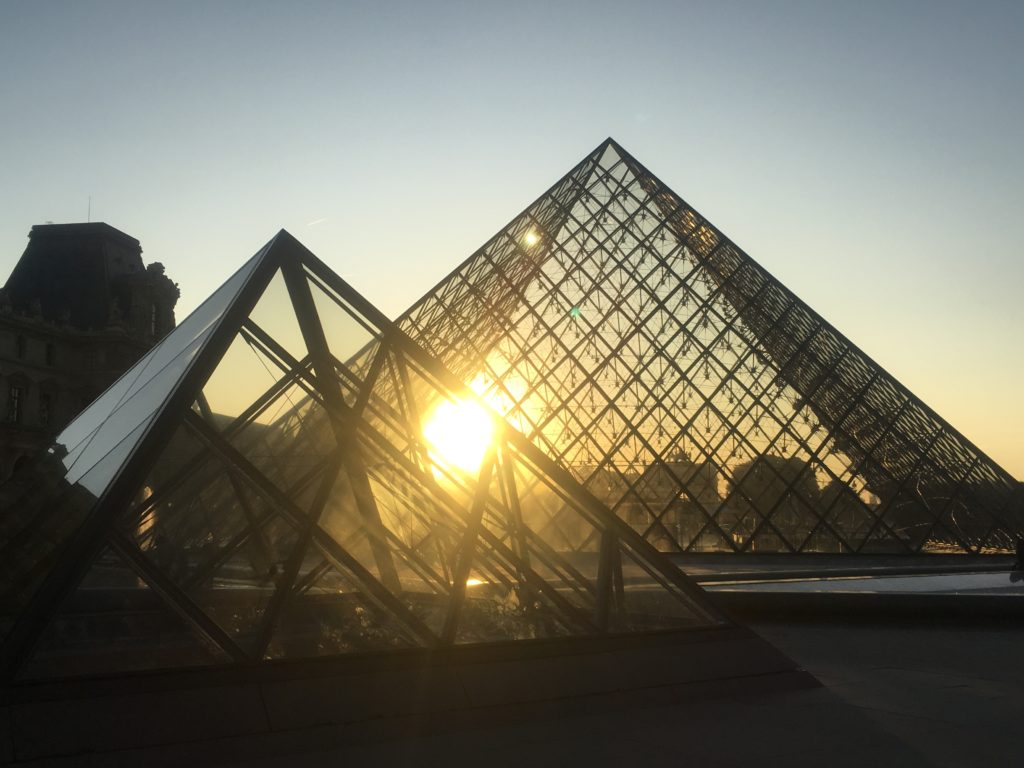 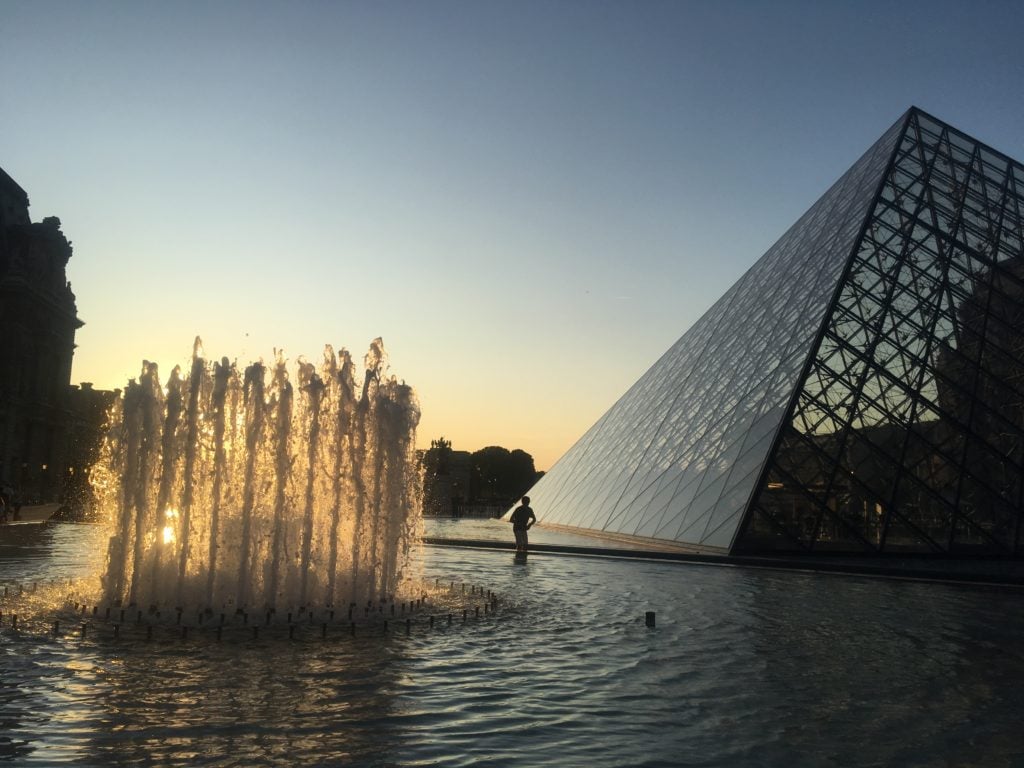 Nope, you can’t really get close to it these days, what with $1.25 billion Canadian dollars raised for repairs and restoration after the big fire. However, it was also fascinating to see this well-known structure looking completely different, shaved almost, with just the framing of repairs in place. It was also quite intriguing to see what a billion dollars buys you in France – one lone guy diligently hammering away while thousands of tourists looked on. In fairness, we did see 2 or 3 more guys peeking out the windows at him occasionally, so at least he had people to fetch him extra nails and such. 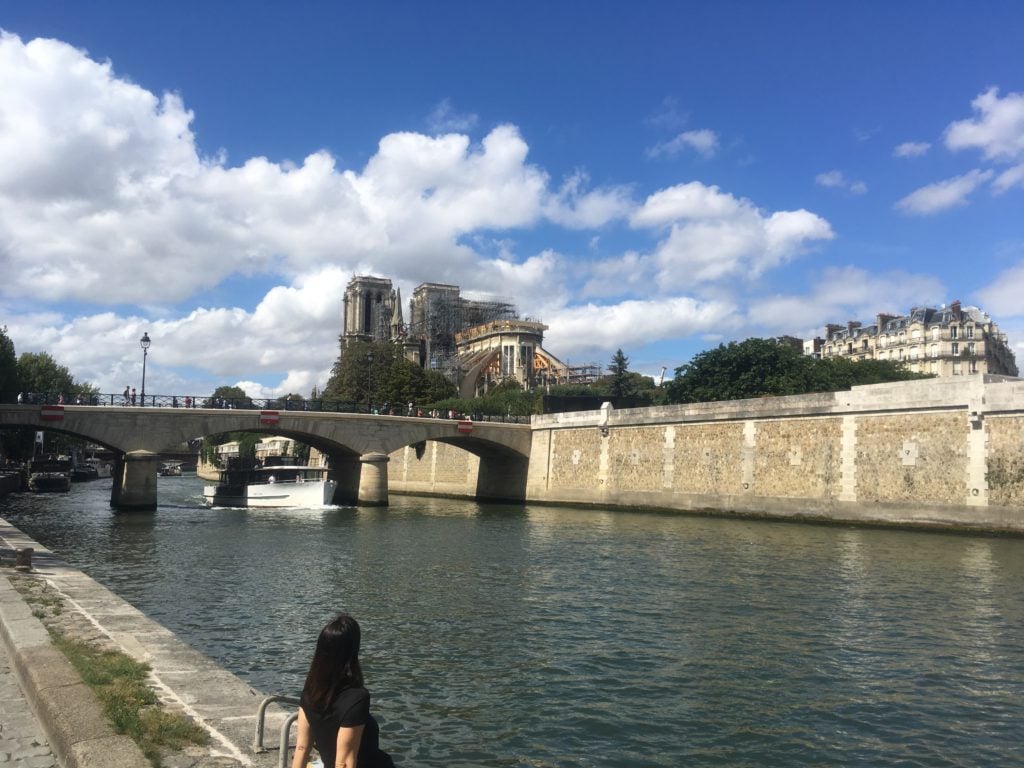 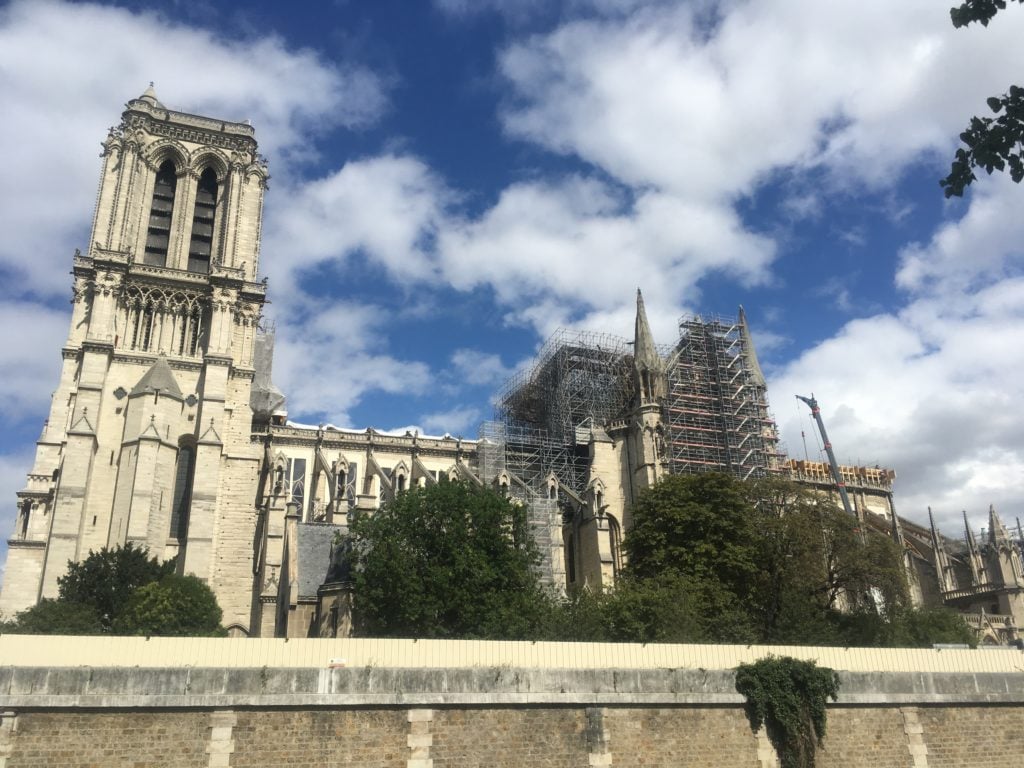 Big, beautiful, immaculately manicured and, despite the many signs adamantly outlawing bikes, scooters, skateboards and dogs, apparently the best place in town to let your dog out for a run. If nothing else, proximity to the Louvre makes it worth adding to your route. 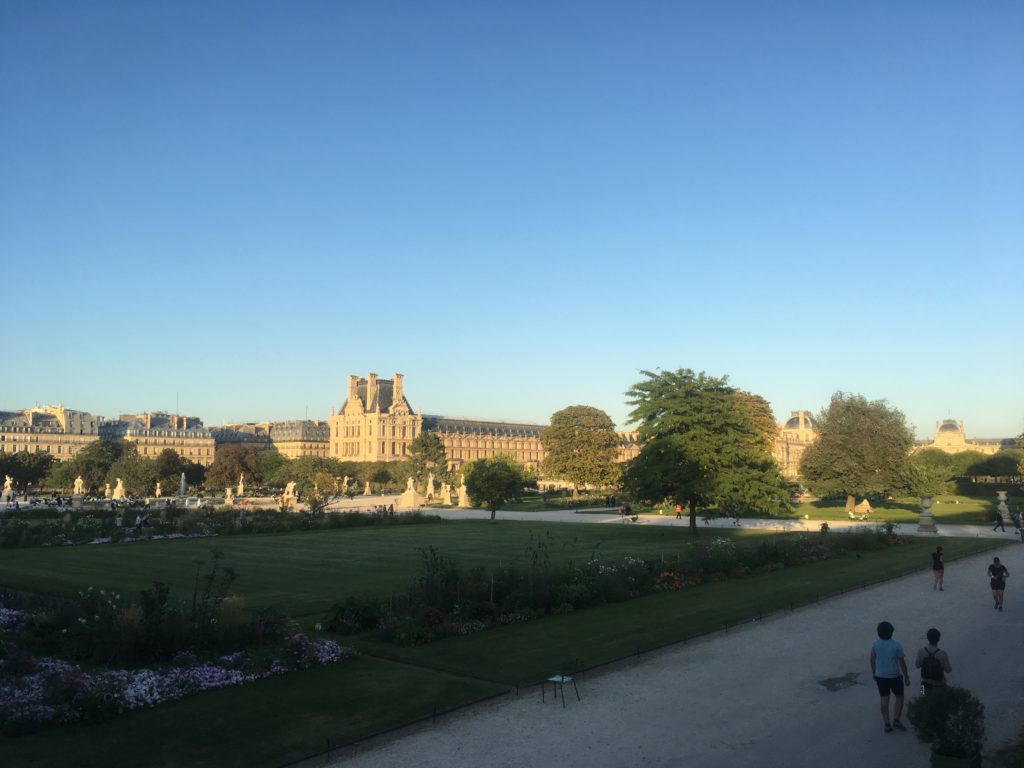 Doing all of that on foot (between 10-15 km in total), plus eating and one super-deep, jet-lag-induced nap, ate up pretty much all of our time in Paris. However, if you happen to have a bit more time to spare, here are a few more favourites from our first time around:

More traffic around it than you usually see in photos, but still pretty impressive in both size and intricacy.

This was one of our favourite neighbourhoods, with a good mix of sights and local flavour, not to mention some pretty extraordinary views (especially the one from Sacre Coeur Basilica). The Montmarte Cemetery also features a lot of famous residents and some unique architecture.

There are dozens, but the Batobus is probably the best value and takes you along basically the same route as all the rest (you can really only go one way or the other, it’s a river, not a maze). Seeing all the same sights from a new perspective is well worth the 17 euro for a 24-hour hop-on, hop-off pass.

This is one of the best things to do in Paris with kids since, well, almost all kids love boats. Plus, you can get on and off whenever you need a change of scenery for awhile. 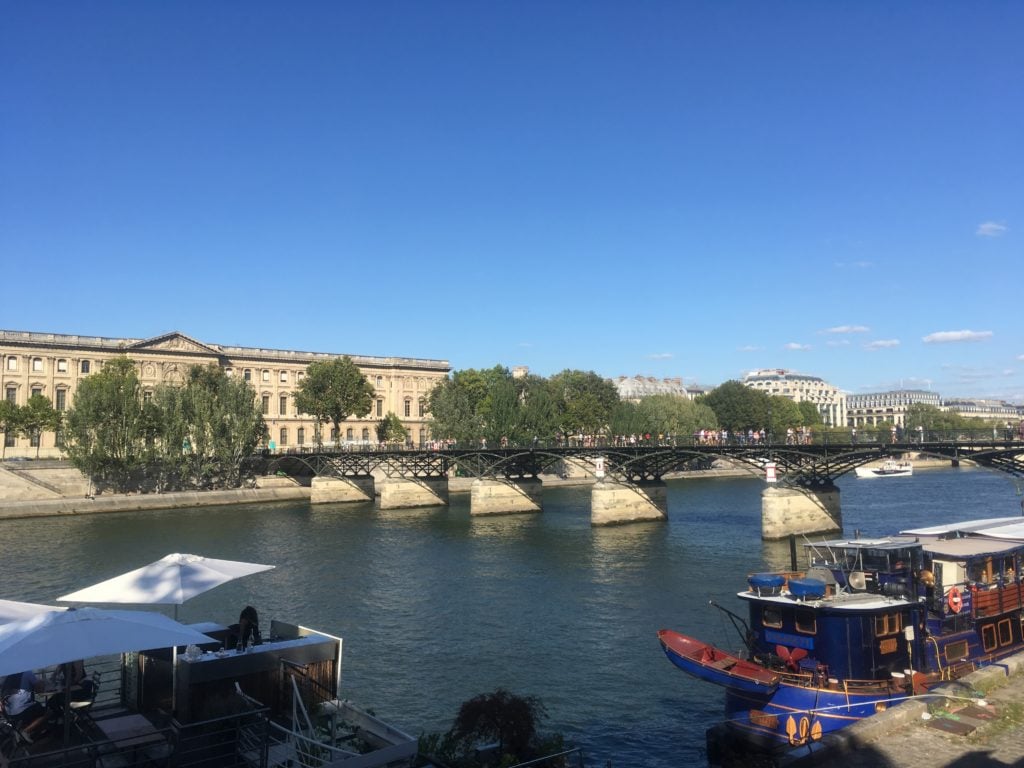 All in all, we are constantly amazed at how many people either don’t like Paris, or “weren’t that impressed”. Our first time around we didn’t expect to like it that much since we had heard mainly lukewarm descriptions and we expected it to be overwhelmingly touristy. But we loved it, and fully intend to continue stopping in every chance we get. The only logical conclusion to explain those down on the place, in our opinion, is that people come in with sky-high expectations that could never realistically be reached. Because looking at the place objectively – needless to say, we have seen our fair share of cities around the world – it is hard to imagine how you wouldn’t be impressed by the beauty, the history, the ease of travel and, most of all, the sheer volume of famous sights and attractions. Yes, it is obviously very touristy. But so organized and manageable despite all the people. Wide sidewalks, good public transport, big spacious public areas. We overheard a guy complaining about how filthy it was – to our shock, having been to, say, Delhi, Cairo, Bangkok and Rome – then realized he was Japanese and, well, yeah, it’s surely no Tokyo. But I think the glaring lack of neon more than evens the scales…

So, the next time you get a chance to visit Europe do your best to add a few nights in grand old Paris, or if 24 hours is all you can manage, now you know where to start.