Eventually we made it all the way north to Chefchaouen, yet another top Moroccan destination. But, before that, after my Surfstravaganza in Taghazout (under pressure I bet you’d be hard pressed to decide which of those two words I just made up) and not so surprising illness that followed, I dragged my weary self in to Agadir and onto a bus bound for giant chaotic Marrakesh, feeling not quite as nauseous yet still unable to eat and, I believed at the time, rapidly bordering on starvation. Meanwhile, Laynni, Lyle and Nadine were also on their way to Marrakesh from the completely opposite direction, having spent a few days out in the Draa Valley, Dades Gorge and Skoura areas Laynni and I had already visited a month earlier. Neither of us knew exactly when the other was leaving, how long their trip would be, where they would arrive in the million-person city of Marrakesh or, most importantly I would say, with no idea when. Therefore it was only natural that I emerged from the bus station bathroom – groggy, grouchy, weak and with dirtier shoes than I had entered with – to find Lyle and Nadine waiting patiently at the front door of the station while Laynni negotiated with a cab driver in her usual animated (some might say hysteric) fashion. 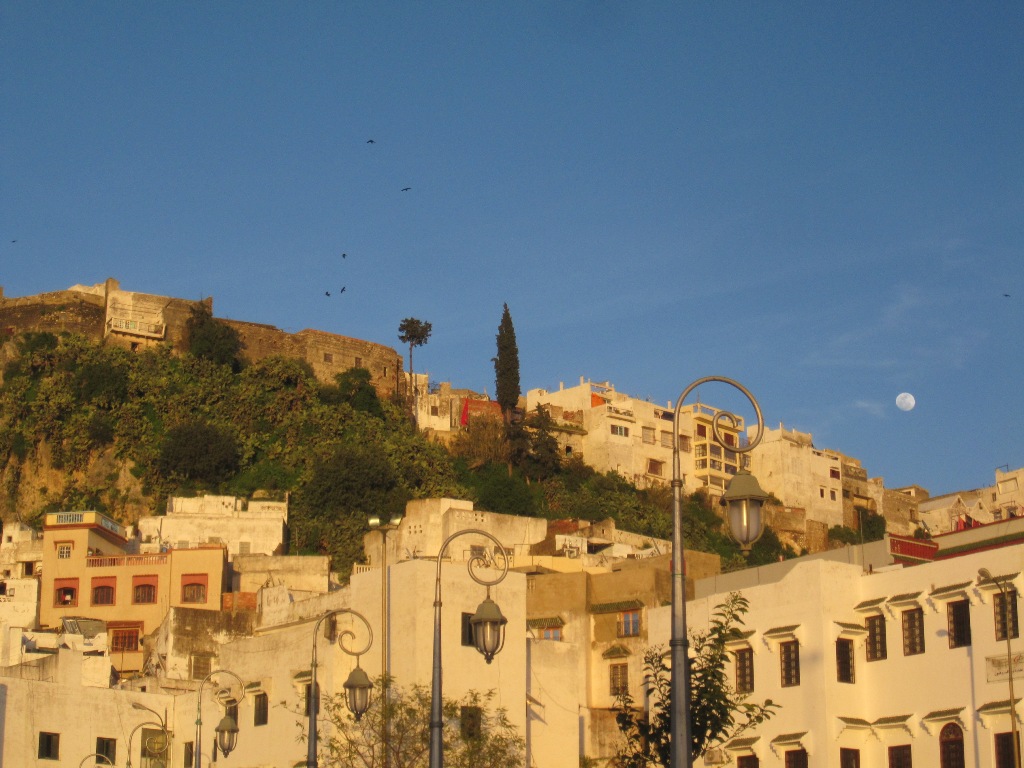 Weird. Realistically, the chances of us intentionally coordinating that unlikely meeting were probably less than the chance of me suddenly learning to roll my r’s without spitting. Anyway, not long after my appetite came roaring back, so naturally I rewarded it for its 48 hours of suffering and impressive resilience by bludgeoning it into submission with the giant beef tajine at Souk Café, the one that consists of beef, gravy, more beef, a couple potatoes, oh, and a lot more beef. It took it like a champ. Unfortunately, sugar was apparently still on the no-go list and against my better judgement I decided to wait until the next day before tackling some of mom’s patented chocolate cookies, the ones that had recently braved a long journey across the Atlantic, through Europe, down to Africa, then spent a whole week travelling in Eastern Morocco, patiently biding their time in a messy crumbling pile in a large Ziploc bag and waiting for my ravenous return. Still tasted great. Although I wisely took it easier than usual, limiting myself to just 8 or 9 in that first go (I picked up the pace as the day went on, though).

Anyway, life soon went back to normal, at least as far as me going apeshit on baked chocolate goods, except that we almost missed the train, literally running through the terminal to catch it at the last second like a moronic rom-com hero intent on professing eternal love we had only just become aware of, as unlikely as that seemed. 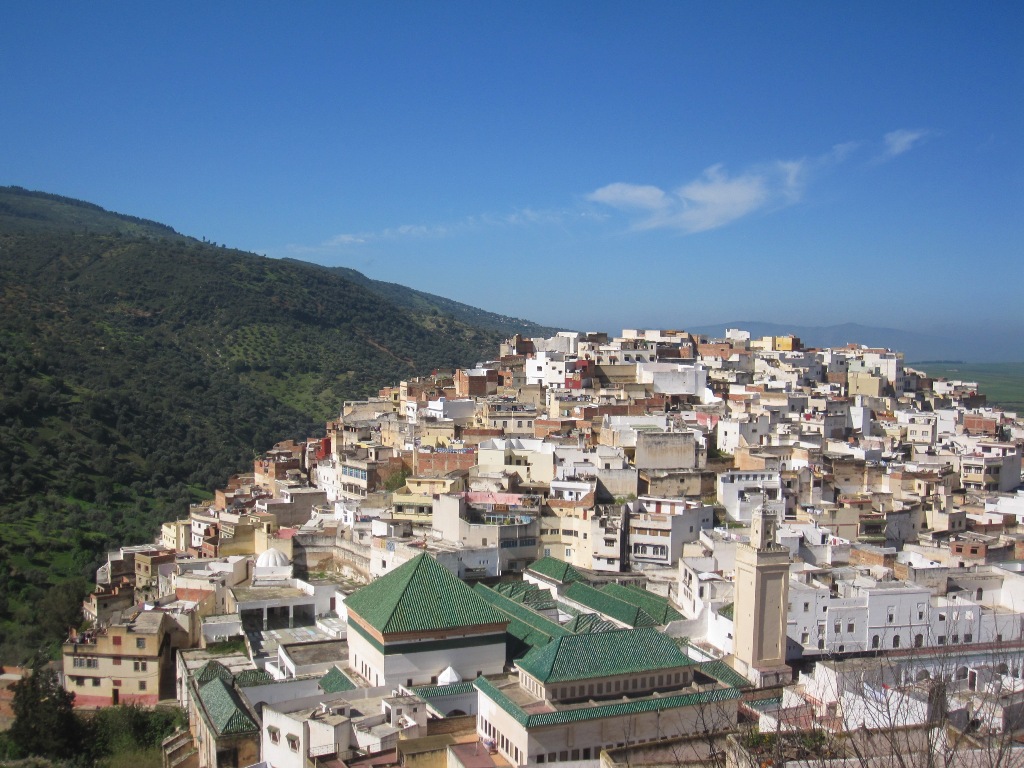 The only other differences being we were now 4 instead of 2, and travelling in a First Class train compartment that we had all to ourselves courtesy of in-law generosity (a much different phenomenon than the more well-known in-law specialties – “back-handed compliments” and “screwing with your holiday plans”). Unfortunately, that cushy compartment still wasn’t air-conditioned, and the trolley sandwiches were just as disappointing for us as they were for the folks in the cheap seats, namely, at least as disappointing as learning to play baccarat and discovering it is the gambling equivalent of Go Fish. It was a relatively comfortable 7 or so hours though, then a quick share taxi ride and we found ourselves in the fascinating whitewashed hill city of Moulay Idriss. With great views overlooking the surrounding countryside and the famous Roman ruins of Volubilis (which we opted not to visit for a second time, if you’d like to read about the first see Moroccan Mayhem) as well as being fairly untouched by tourism thanks to non-Muslims being completely banned from the city as recently as the late 90’s (presumably due to fears of a Christian-led exodus away from the teachings of Allah and toward the creamy milk chocolate sacrifice of giant edible rabbits in honour of Jesus’ suffering and well known sweet tooth). Nonetheless, even with much smaller tourist numbers than many more popular Moroccan locations, Moulay Idriss still managed to be on the cutting edge of annoying tout technology – the first of whom somehow got us to fall for the whole “I work for that hotel” bit, the second the sketchy hotel owner providing us with a wide variety of suspiciously nebulous taxi quotes for our trip to Chefchaouen the following day, the third to ninth erstwhile guides whom we managed to steadfastly rebuff, and the tenth of whom used his harmless aged appearance, slightly dimwitted grin and unexpected persistence to manage to “guide” us back to the same viewpoint we had just come down from (to the obvious confusion of the teenagers playing Bejeweled Blitz on their laptop while perched on the high stone ledge). 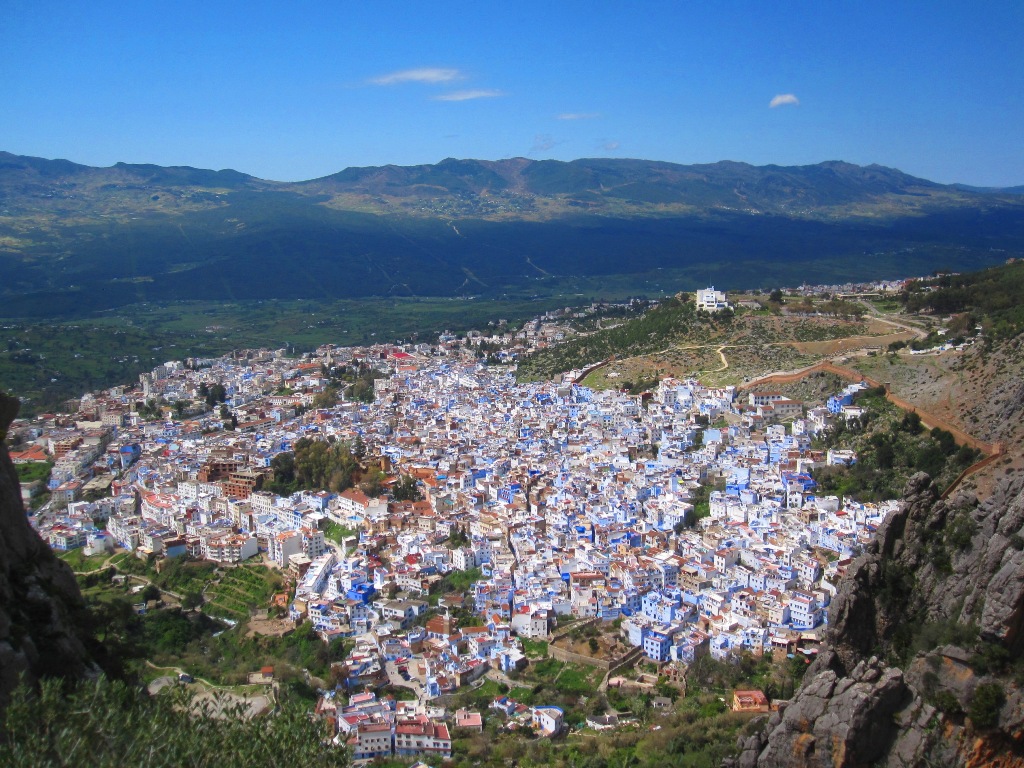 Now, this being Morocco and all, these were hardly our first unwelcome tout experiences. The reason I mention it, however, is that although we didn’t recognize it immediately, in hindsight it was clearly a watershed moment in the transition from Southern Morocco and its predominantly Berber culture, to Northern Morocco and its predominantly leering at your wallet culture. Leering through a friendly welcome with a big sincere smile, but leering just the same. We spent 4 days in Chefchaouen, a must-see stop on every Morocco itinerary. Located in the Rif Mountains, the area reportedly produces 42% of the world’s marijuana originates, and I was propositioned exactly 27 times to buy some variation of weed/hash/smoke/bud/stuff or, usually, just the hand sign of the fingers all pinched together and held to pursed smirking lips while loudly sucking in air, clearly denoting the extravagant pleasures of smoking whatever happened to be balled up in their front pocket at that moment. Then 3 more nights in Fez, where a rotating roster of a dozen smarmy young grifters diligently stood watch outside the alley of our hotel offering a vague list of services ranging from guide services to shopping tours to many more variations of illegal narcotics to even some rather dubious protection services (mainly suggesting it might not bode well for us to not accept any of these tantalizing offers), and then the tannery shop, where as Nadine was already in the process of purchasing a leather bag, presumably for far more than it was really worth, the guy she was buying it from rather brazenly insisted Lyle give some extra money to the guy on the chair, yeah, that guy over there, because, you know, he works there.

Or something. Northern Morocco in a nutshell. 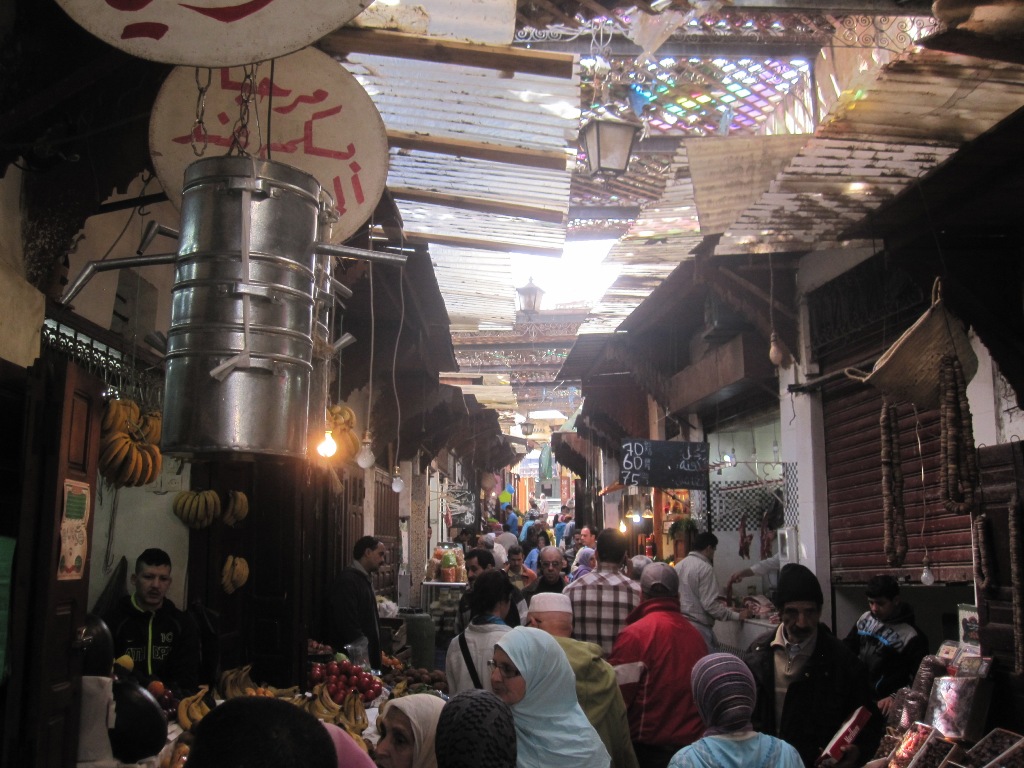 Which is why by that time we had fully succumbed to nostalgic reminiscing about the friendly Berbers of the south, with their gregarious hospitality, genuine friendliness and refreshing willingness to accept “no, thanks” with nothing more than a placid shrug and goodbye wave. Truly a different culture, far more noticeable than we had imagined, and one that we found highly preferable in hindsight. Not that the added hassles of the north were enough to keep us from enjoying the fascinating cultural attractions and beautiful hill settings but, much like using lacrosse gloves to give an erotic massage, it just didn’t feel as good.

Anyway, all moaning and bitching aside, although we had recently seen all sorts of wonderful deserts, oases, palmeraies and ocean views that were at least comparable, Chefchaouen was probably the nicest town/city we saw in all of Morocco, yet another reason it is one of the best countries to visit in Africa. Snugly tucked into the foothills of steep hills and pseudo-mountains, the “blue city” seemed to be the perfect size (plentiful restaurants, a dynamic feel to the place, somewhere to pick up a multi-coloured blanket every 50 metres or so if you found yourself with a multi-coloured blanket emergency), and, of course, painted almost entirely blue, which I find very appealing in the way it ties in with all my favourite sports teams (Giants, Jays, Icelandic National Folk Wrestling Team, Leafs, in that order – Arsenal remains steadfastly red in spite of my numerous emails to Stan Kroenke explaining my dilemma) as well as matching my special 2013 single-tone, ultimate relaxation ensemble (blue hiking socks, blue pajama pants, blue t-shirt underneath blue sweatshirt – in blue streets of Chefchaouen I’m like a chameleon slash ninja, albeit a ninja that trips on imaginary bumps every couple blocks or so). 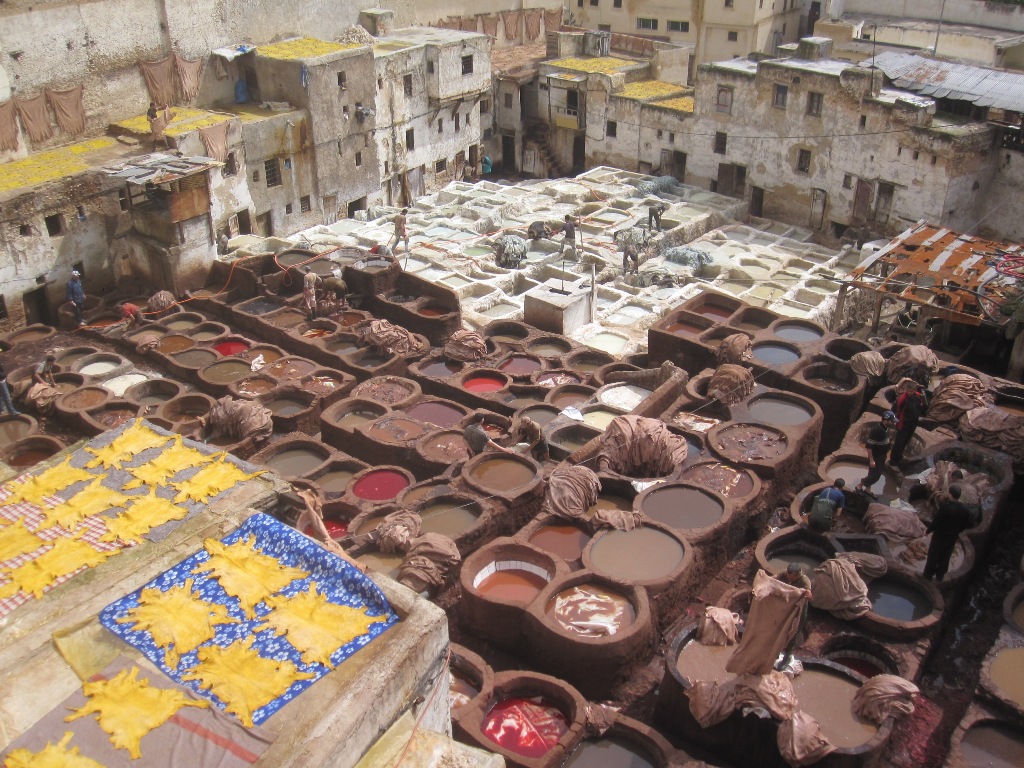 We did some very interesting (and occasionally very difficult) hikes in the surrounding areas, had some good meals, thought it was great the way the only traffic in the medina consisted of glum donkeys, enjoyed the festive atmosphere of having all the vacationing Europeans down for Easter, and the only downside was losing Laynni’s vest during one of our hikes (but considering it was blue we didn’t really give the search our full attention). All in all, though, as they say in travel guidebooks and the double-jointed section of Christian dating websites – “highly recommended”.

Then it was on to Fez, one of our favourite stops our first time in Morocco and a place we were very curious to see 9 years later, especially considering that its entire allure stems from the medieval – unabashedly old – feel to its ancient medina. Well, not surprisingly, there have been some changes – more tourists, more restaurants, slightly more organization within the maze of tiny, winding streets and alleys through the addition of a few colour-coded signs (which still only made it comparably organized to, say, a hobo flea market, or Walmart on child tax day), but most of it was exactly the same – chickens for sale, carpet shops, donkeys hauling steel candelabras, the stench of the tanneries, severed camel heads, all sorts of random hammering, hats, you know, the usual. So I would say it was still a great place to visit, although not nearly as shocking and memorable as the first time around, especially considering that back then it was one of our first wild ‘n crazy Islamic souqs, while by now we are probably more familiar with their jovial filthiness and charming dishonesty than we are with an honest day’s work for an honest day’s pay, or clean pants.