Once again we’ve made our way home for the splendour of Christmas Capitalism, several feet of snow and -25 temps and all, just like always. Ugh. However, we did have a semi-eventful last week in Madeira full of everything from hiking the 25 Fontes to shopping to napping to driving to waiting angrily for trains to arrive and depart.

After a few more rather uninspiring wanderings around the rather cluttered Garajau area where we were staying we decided it was time to venture a bit further afield before it came time to ditch The Isle of Moderate Weather and Plentiful Hills for the frigid climes of home. In order to bypass some of the longer and more tedious bus trips involved with getting around on Madeira’s confusing network of winding roads and endless tunnels we rented a car for a day, splurged out on a slightly rough around the edges Chevy Matiz (picture an oversized garbage can with a bumper) then proceeded to get lost. 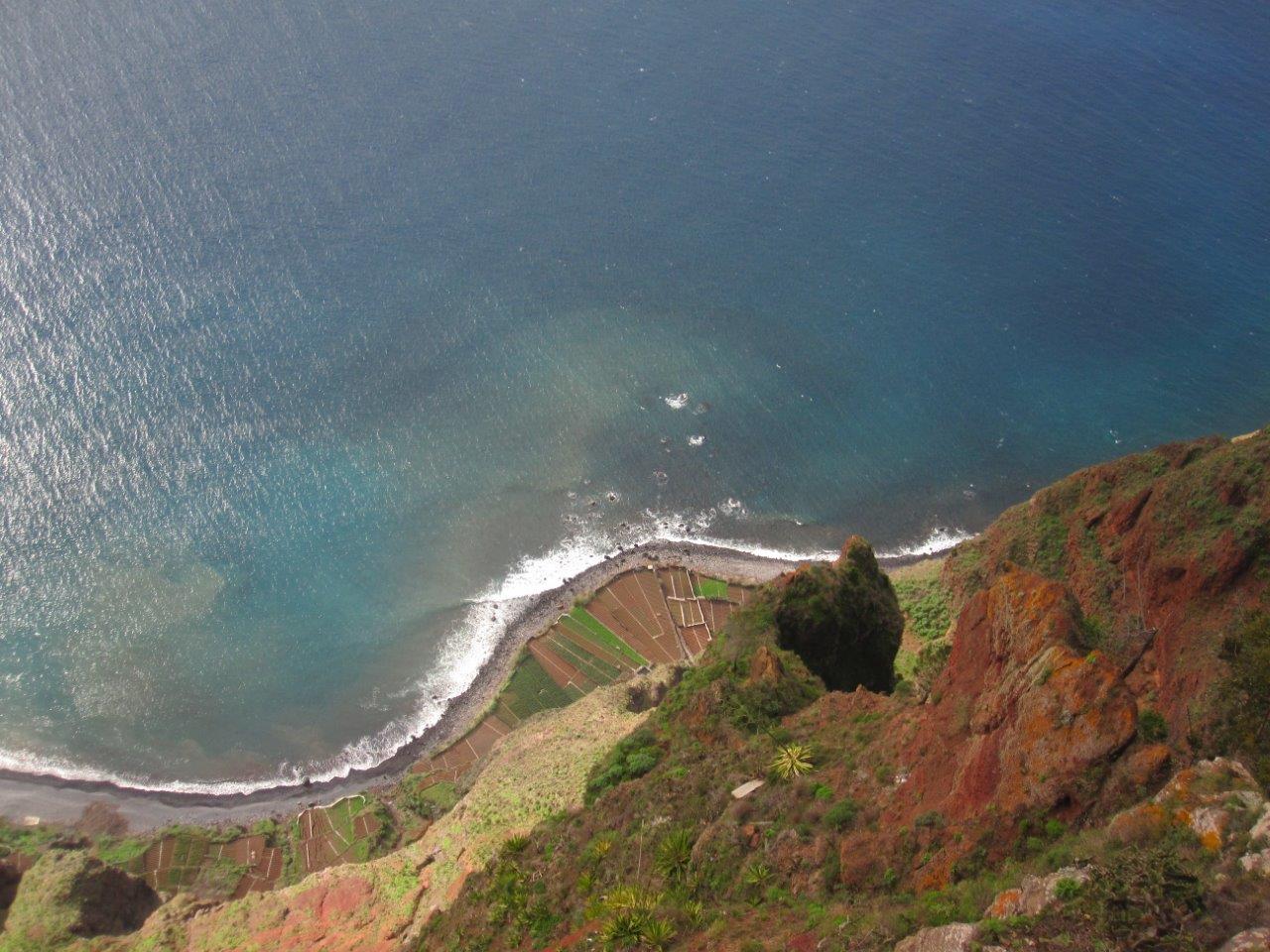 A lot. But, as I said, Madeira is a pretty small place, small enough that it is apparently possible to find your way around the entire place using nothing but a woefully inadequate and out of scale map, an obstinately ineffective GPS system and the more traditional trial and error method. Our first stop was Cabo Girao, some oceanside cliffs that claim to be the second-highest in the world at 583 metres. The views were obviously pretty unreal, although the gravity-defying viewing platform with the glass bottom designed to create vertigo and generate that uncomfortable sinking feeling in your groin (no, not the one you get when you realize the hooker you married last night is actually half Jewish, the other one) would have been a bit more effective if it hadn’t been so dirty that it was like looking through Steve Carell’s chest hair. Then the search was on for Rabacal and the famous 25 Fontes (Springs) levada hike.

Let’s see, the place we’re trying to find hasn’t been mentioned on any of the various muddled road signs or baffling roundabouts but we are fairly certain it is uphill soooo, let’s try that road. So far, so good. Hmm, getting a little rougher. Hey, is this somebody’s driveway. Those tire tracks keep going… Don’t slow down! Don’t slow down! Wait, this can’t be right. Watch for somewhere to turn around. 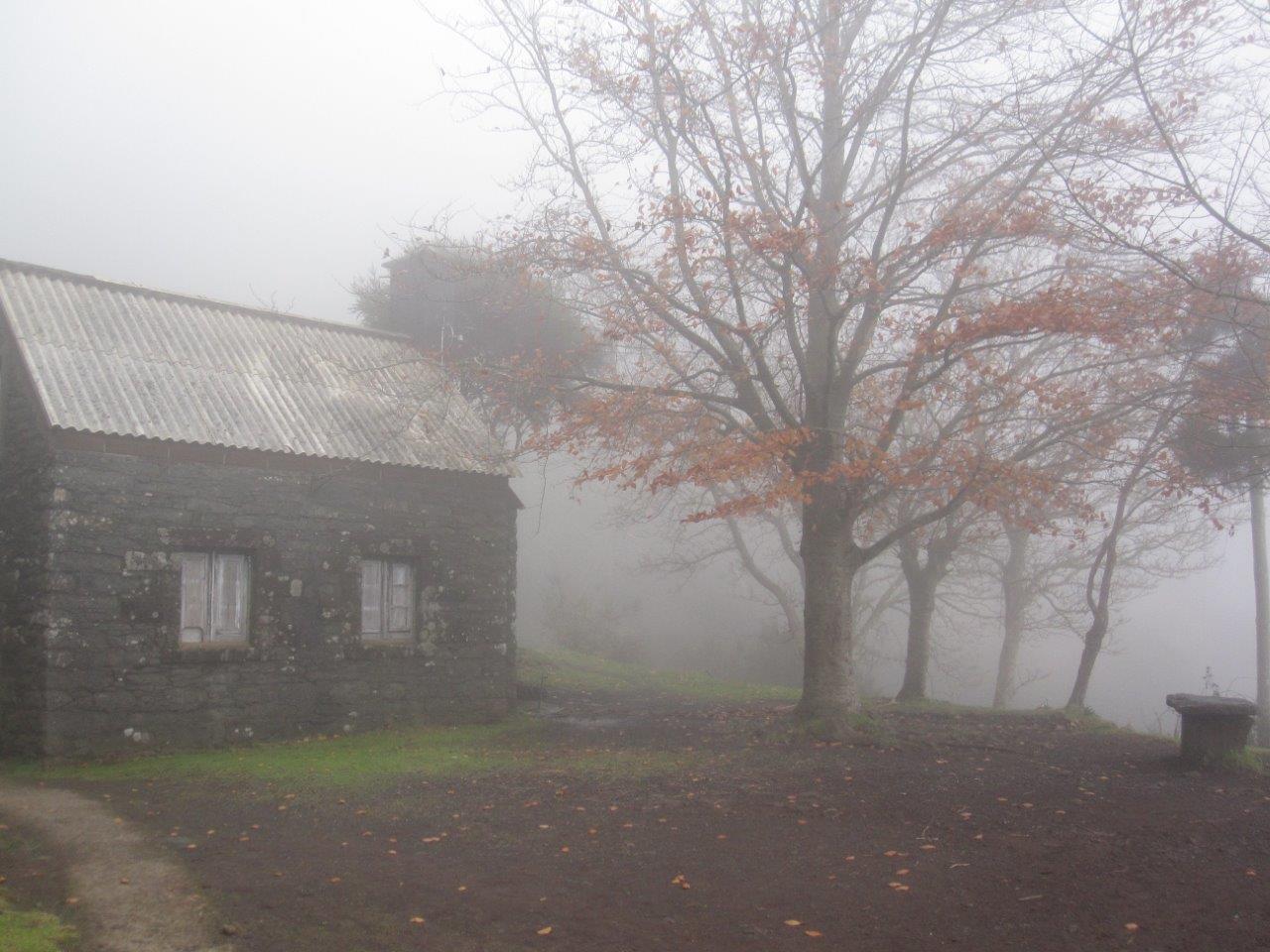 Where the hell did this fog come from? Are you watching for somewhere we can turn around? What does that sign say? Oh. I guess we’re here. Well, that was easy enough, I suppose.

Madeira is justly famous for its massive network of levadas that criss-cross the island carrying water down from the heights to all the thirsty people lounging along the ocean front nursing their hangovers. And all these levadas then have hiking paths alongside them creating a great maze of trails to choose from. The 25 Fontes hike was pretty amazing, starting in deep fog through murky forest before leading us through a ten minute hike through a pitch black, dripping tunnel through the mountain. After that it opened up to a scenic valley with several waterfalls (possibly 25 if the hype can be believed) visible in the distance which we slowly approached with nary another hiker in sight the whole time. Then upon reaching the base of the climactic falls I was suddenly surrounded by about fifty tour hikers dipping their sweating feet in the crystal clear pools, chomping on mass produced tour sandwiches and grinning madly for all sorts of photos. It was like they had been airlifted in from Euro Disney or something. Which I soon learned they hadn’t when I had to somehow wend my way around them on the tiny narrow levadas on my way back out, only occasionally amusing myself by brushing past old ladies just a bit too closely and always crotch first. 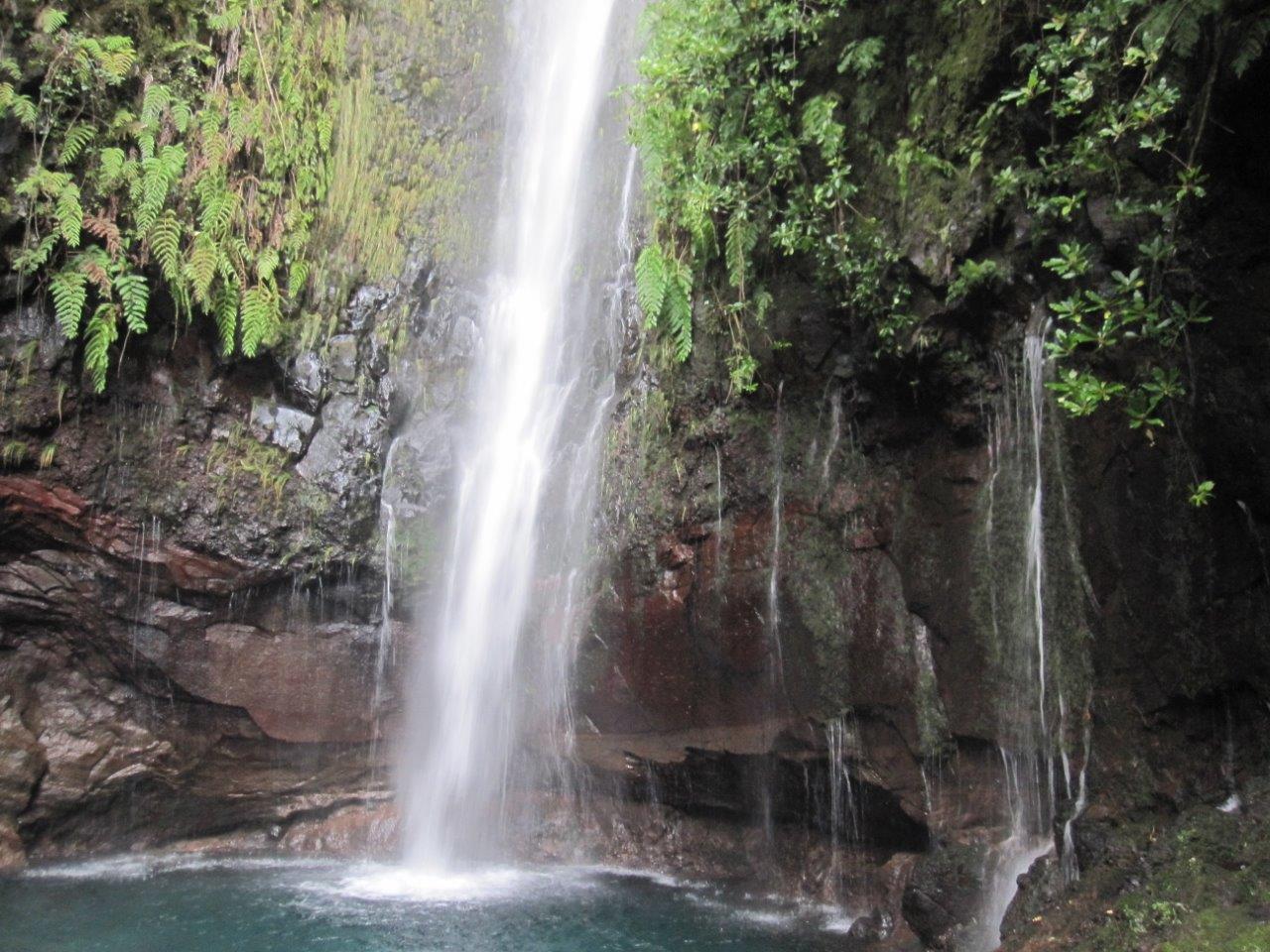 After that titillating little adventure we continued our constant battle for logic with the seemingly directionally challenged GPS Girao eventually finding our way to the beautiful little ocean front town of Porto Moniz (really almost every town on Madeira is ocean front), then spent a really long time travelling a very short distance across the northern coast of the island on tiny winding roads that were often just single lane and seemed to always be either perched on the cliff high above the water or cutting right through the mountain in tunnels that struck me as pretty epic feats of engineering for a place that calls every vacant pile of rocks a “beach”.

But none of them compare to Portugal’s most popular hike – the Rota Vicentina which wanders down the Costa Vicentina passing through beach towns and charming villages of Aljezur, Odexeice, Zambujeira, Almograve, Carrapateira, Vila Nova de Milfontes and Porto Covo along the way.

Then, as usual, time seemed to slip away from us and before we knew it we were packing up our things (iPod, trashed hiking shoes and a spare pair of underwear) and deciding what needed to go home with us (Vaseline, obviously) and what could be left behind for our return visit in the new year (pajama pants, can of beans) and, just like that, we were off to Lisbon again where we engaged in some heated debate over how to spend our afternoon before eventually agreeing to disagree and undertaking our activities separately. Laynni was proposing several electrifying hours of shopping for boots and Christmas gifts which, if we were successful, we would then get to pack up and haul all the way back across the ocean, through multiple terminals in Lester B. 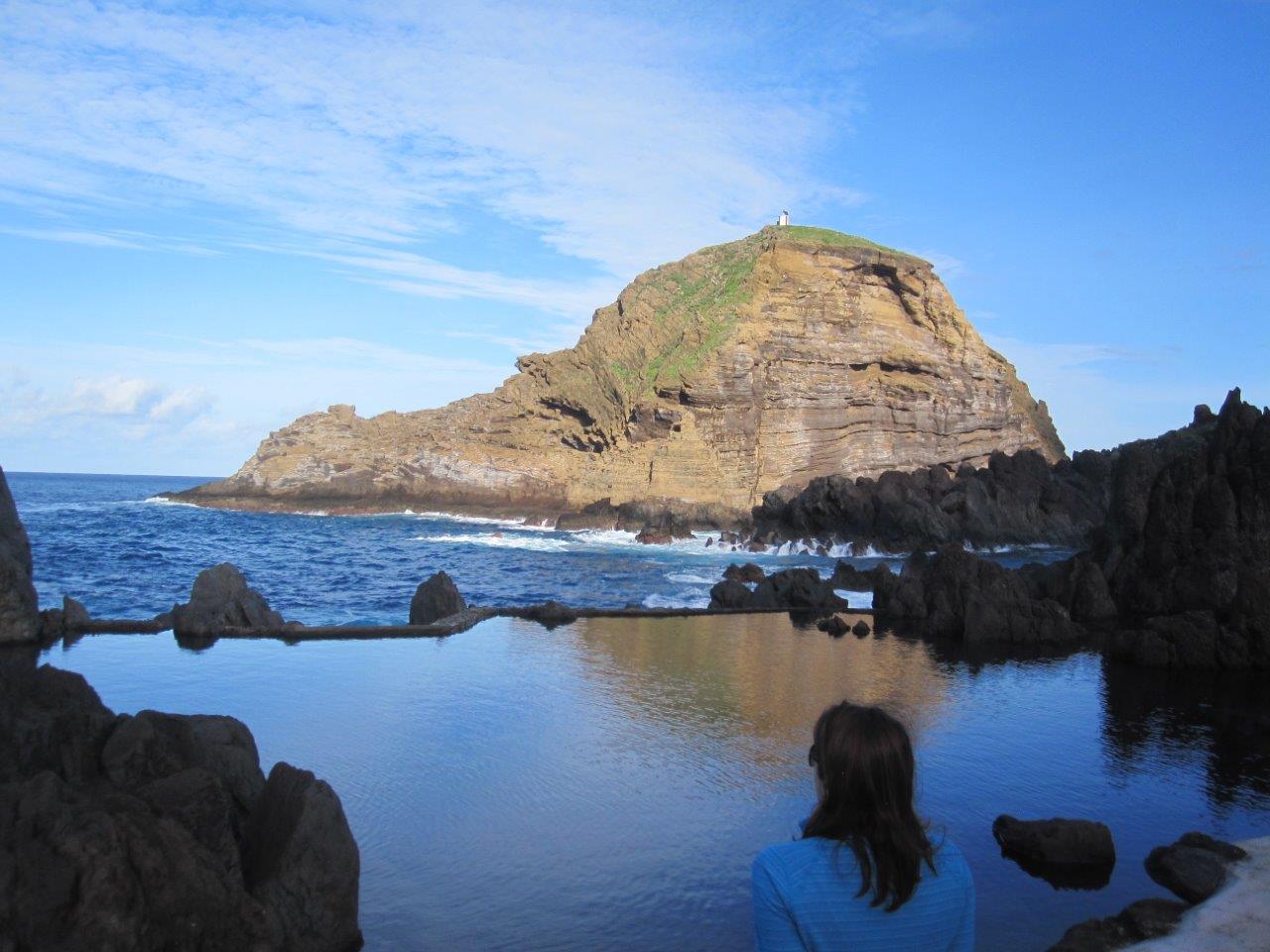 Pearson Airport in Toronto and on to the trunk of my parents car in the middle of a snowstorm in Saskatoon. Which is exactly what she did.

I, on the other hand, thought it would be much more fun to spend a while lost in the confusing maze of narrow Alfama streets in search of a shortcut to the train station where I would then sit baffled for 45 minutes waiting for the 2:38 pm train to finally leave at 3:25, spend 45 minutes gazing out at the surprisingly harsh scenery full of tenement housing and disreputable looking dogs before reaching the picturesque old suburb of Sintra. Which was, admittedly, a pretty cool place, although now I was behind schedule so raced all the way to the top of a huge hill to rush around an impressive castle, then ran back down to wander the pretty little alleys of Sintra Vila in a relaxed yet hurried fashion in order to get back to the train station in time for the 5:20 train. Which apparently was already gone. Then the 5:40 train didn’t ever really show up. But they did announce numerous times that it would be arriving in three minutes. Those announcements turned out to be quite false. But we still had the 6:10 train to count on. But not really. Fuming, fuming. Finally, 6:20, train arrives, the hordes of people now gathered breathe a collective sigh of relief and squeeze on. To sit and wait for 25 more minutes while the “about to leave beeping” went off every two minutes or so just to get our hopes up.

Long trip back, a couple more wrong turns in search of the hotel, 7:45 pm, finally over. Six hours of transit, fifty minutes of hectic sightseeing. I suppose you could say Laynni won this round.

Merry Christmas to all, and to all a train-free holiday!

Best Tenerife Hikes Ranked From 1 to 10