Before we got to Las Penitas we had hoped to leave the Corn Islands on the Monday but when we called the airline they informed us (and several other people we talked to) that the flight that morning was completely full. No problem, we’d go Tuesday. Monday morning we took the boat over to Great Corn with the idea of spending the night there for something to do and to make things a little easier the following morning. Got there, decided that, hey, we’re here anyway, let’s swing by the airport and just see what happens. Half hour later we were seated on the plane that was barely half-full, if that. Central America – don’t ask too many questions, just roll with it, baby. 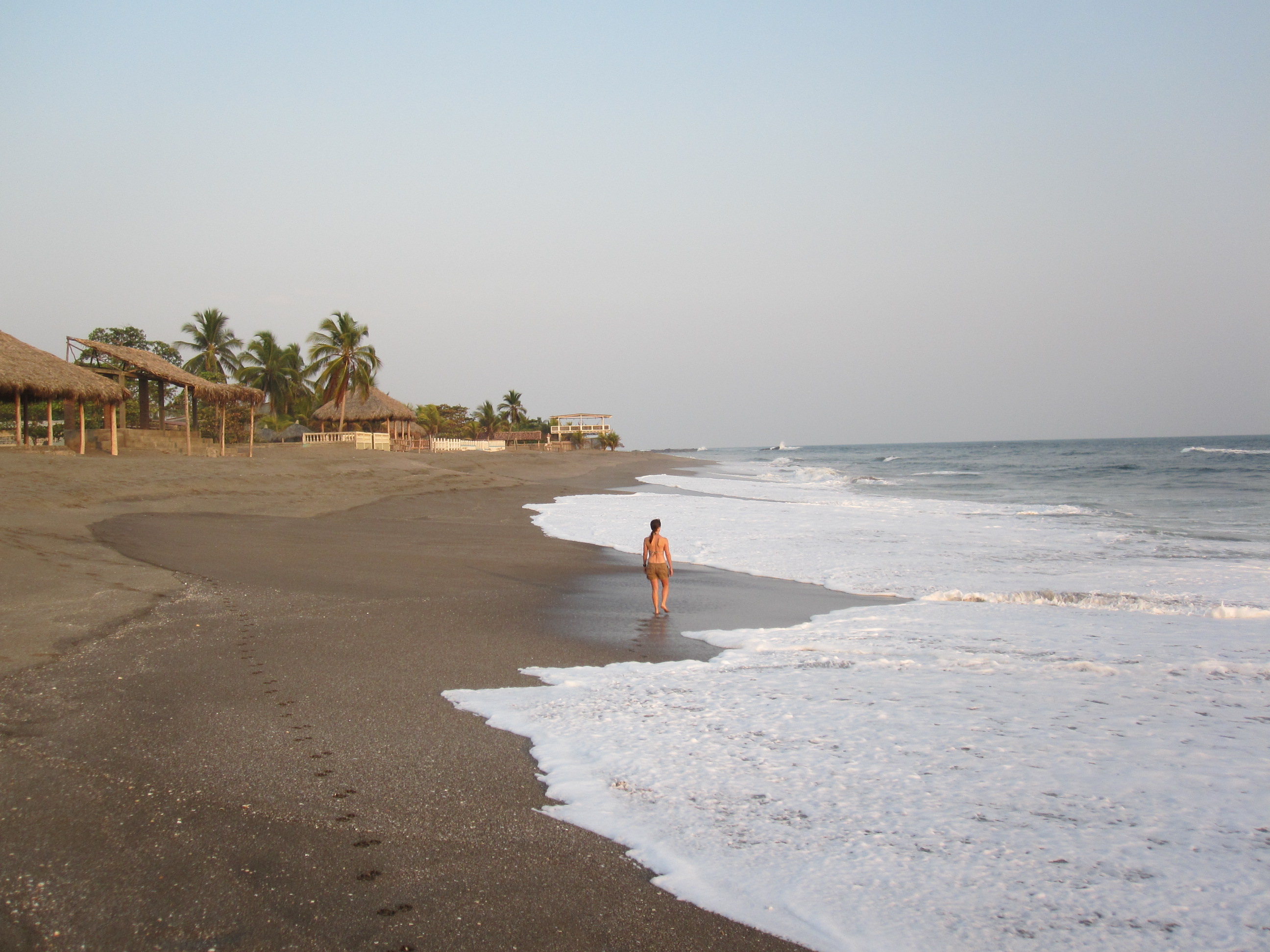 After flying to Managua we took a minibus to the colonial city of Leon, nice to look at yet with a very authentic feel, like a really professionally done boob job. Really freakin hot, too (something else they have in common). Stayed at a really nice hostel (Tortuga Booluda) where we shared the comfortable hangout area with a strangely proportioned tall couple who spent most of their time either monopolizing the one computer (once again glad we brought our own laptop), arguing in some type of Eastern European language or, of course, necking in the kitchen. Anyway, the only reason this even comes to mind is because the “male” of the pair had one of the oddest looks we’ve ever seen – except for a brief period when he was inexplicably wandering around the hostel in just his tiny underwear, he spent most of his time in what truly had to be a pair of women’s shorts, flowered, really short, and pulled up almost to his navel yet needing constant attention to be picked out of his ass. He matched this with a jaunty navy blue and white striped shirt reminiscent of a sailor in a 1930’s musical, except open all the way down to his hairy belly, and way gayer. Together with hair pulled up into an Israeli bun (a fashion statement whereby all hair originating above the ears is tied in a loose knot on top of your head, usually accompanied by four days growth of beard and a rather cautious approach to spending) it made for a powerful image. I wish we had a picture to show you but I was worried if he caught me taking one I’d end up swabbing the decks, or learning firsthand about “ocean love”. 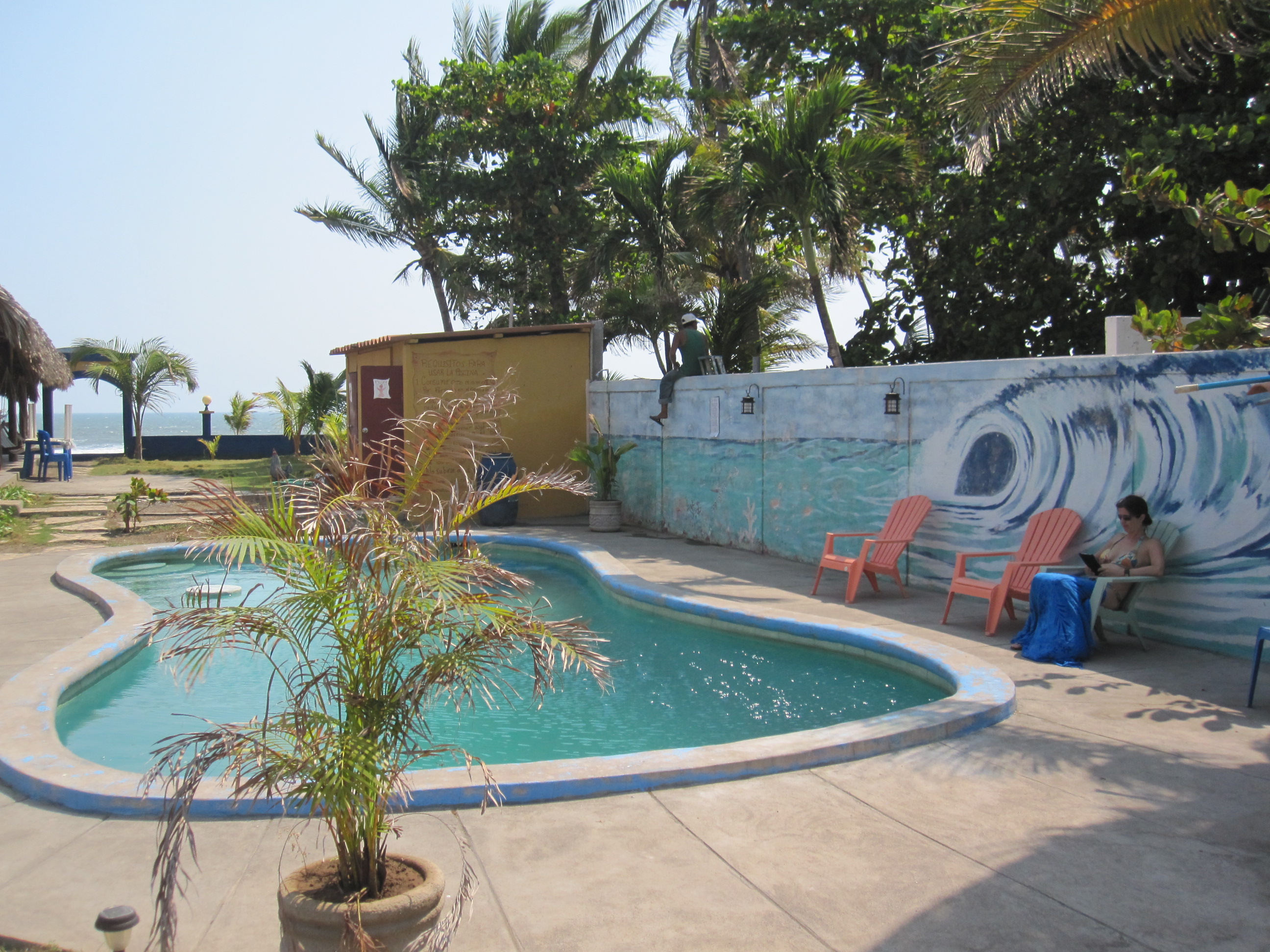 So, somewhat predictably considering the heat, we decided one full day away from the beach was plenty for now, and the next day we headed down to the nearby ocean-front town of Las Penitas. And yes, if that name sounds familiar, it should, as it is just a pair of extra S’s off the town near Puerto Vallarta we lived in last winter. There were other similarities as well, such as big waves, a nice pool, free range dogs, great sunsets and white crosses scenically placed at the end of rocky points. On the other hand, unlike Mexico, which featured festive crowds of local families and tubby Canadians in RVs with clever bumper stickers like “Home is where you park it” or “If this camper’s a rockin, don’t come a knockin”, on the Pacific coast of Nicaragua most of the people were really just, well, not there. Quiet as an amputee cricket.

Clear signs that we are nearing the end of a long winter of travel – three of my six pairs of underwear have holes in them and there is duct tape holding together various parts of each of my flip flops, backpack and watch. 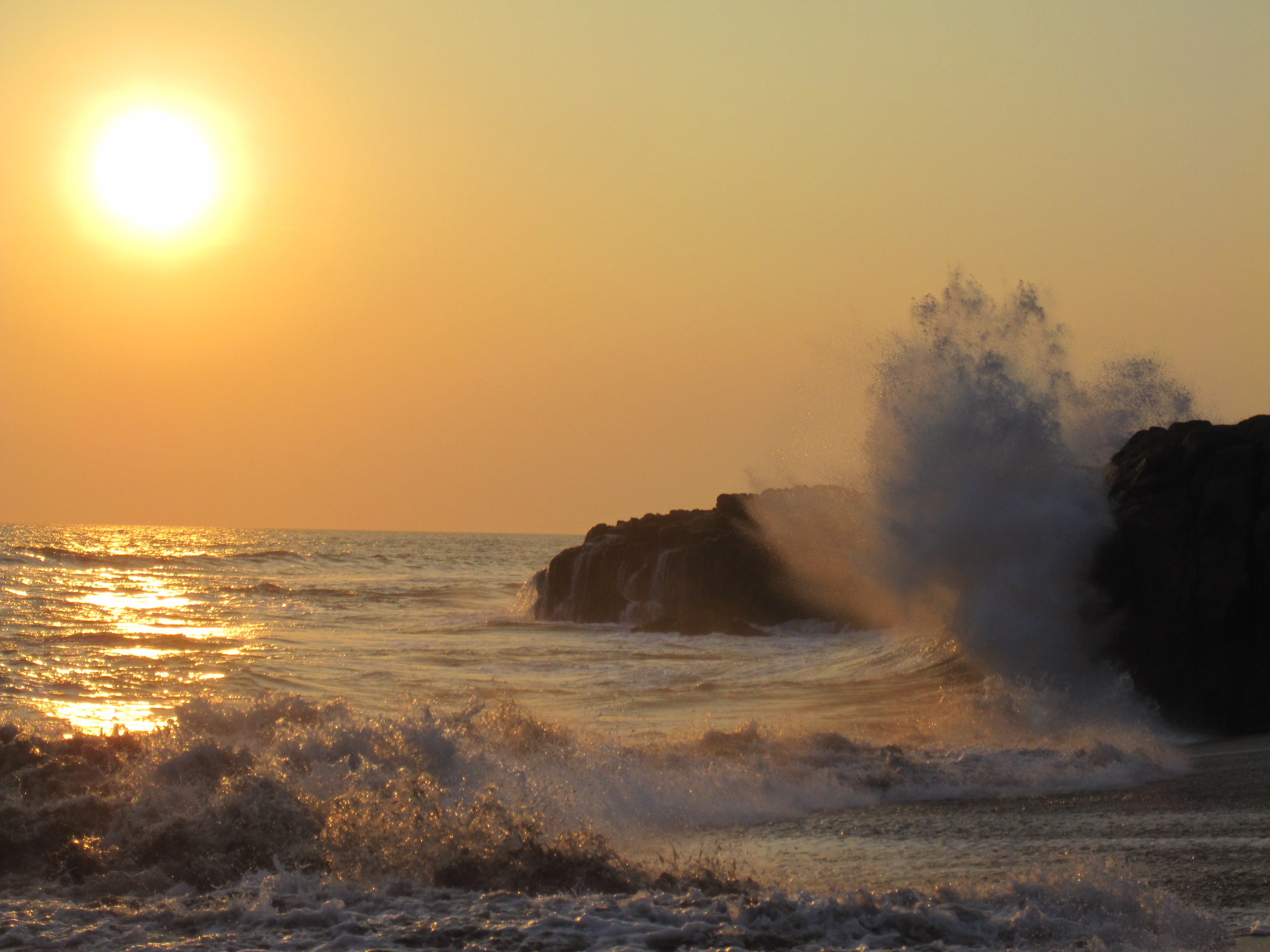 On the bus from Leon we were about ten minutes from Managua when we started discussing the upcoming switch of buses, talking about how helpful and courteous people have been in Nicaragua so far, since usually bus stations are strongholds for the most irritating, overbearing and generally scummy members of any given society. No offense intended to all those honest Greyhound employees at home who work hard every day transporting itinerant drunks to wherever it is their welfare cheques get mailed. Anyway, we stepped off the bus and were immediately mobbed by a bunch of guys trying to steer us to their particular Granada bus, hoping to convince us through confusion and sheer volume, and doing their best to “help us” with our bags (once your bag is on their bus you don’t have much choice now, do you?). The ensuing wrestling match for my day pack left a bad taste in our mouths, despite my final victorious stiff-arm, although looking back now it may be a good thing. I mean, why exactly would Nicaragua be the one place in Latin America where bus stations aren’t the “Home of the Douchebag”? It was starting to seem suspiciously too good to be true, like the time your girlfriend voluntarily offered up oral right after she got back from a girl’s trip to Jamaica. 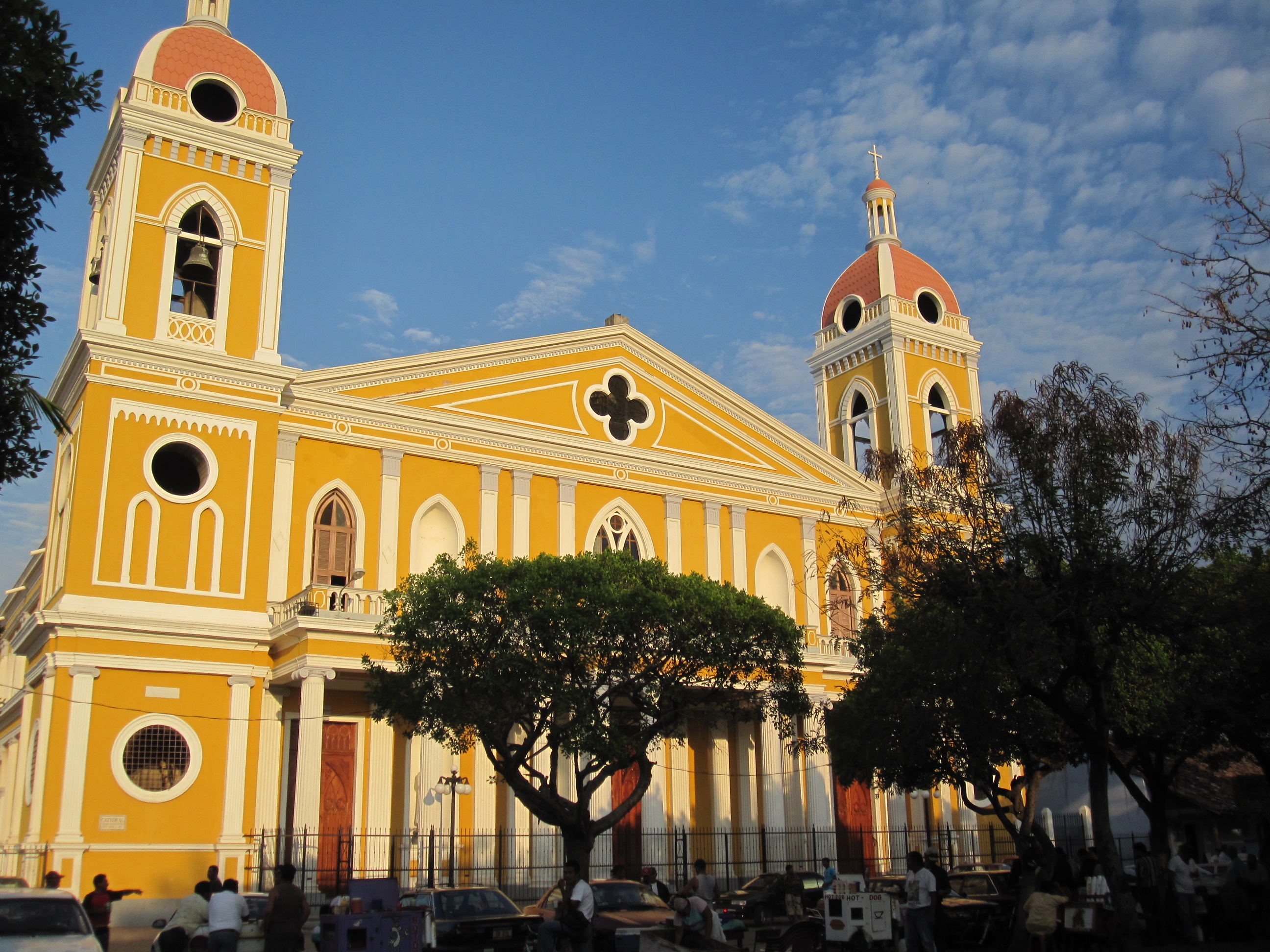 Besides hiding in our cool sanctuary of a room we did poke our heads out occasionally, mainly to eat, pick up water and test the absorbency of our underwear, although during brief instances of guilt we did actually work up the energy to try out a few of the local attractions:

A)      Las Isletas tour – a couple hour boat journey with Grant and Debbie, a couple we met on Corn Islands, just the four of us on a boat designed to hold about twenty. Las Isletas are a picturesque archipelago of tiny islands (reportedly 365 of them, although that seems like a conveniently symbolic number) created when nearby Volcan Mombacho erupted some 3,000 years ago (not 124 years ago, like I somehow translated his answer to be the first time). Most are uninhabited, some are just small piles of rocks while others are privately owned by Nicaragua’s rich and pretentious. Obviously we couldn’t stop at all of them (I lost count at 2) but did fit in visits to the (strangely literal) highlights, such as Fortress Island, featuring an old Spanish fort, and Monkey Island, where a monkey leapt onto the front of our boat just as Laynni was taking a picture, causing her to stagger back with a yelp like she’d been surprised in a dark alley by a rough looking case of hepatitis. In her defense, we had just been discussing the monkey in Vietnam that bit the English guy, stole his camera, passport and iPod, and then rubbed it in by hogging all the trail mix at our Friday Singles Mixer. Our final stop was at Restaurant Island which, oddly enough, had just a ramshackle bamboo shelter with a blind shaman who sacrificed a flying squirrel, rubbed the still-warm blood on my forehead and ominously predicted a future fraught with peril, and escalating levels of body hair. Ha ha, I’m only kidding. It had a restaurant, too. 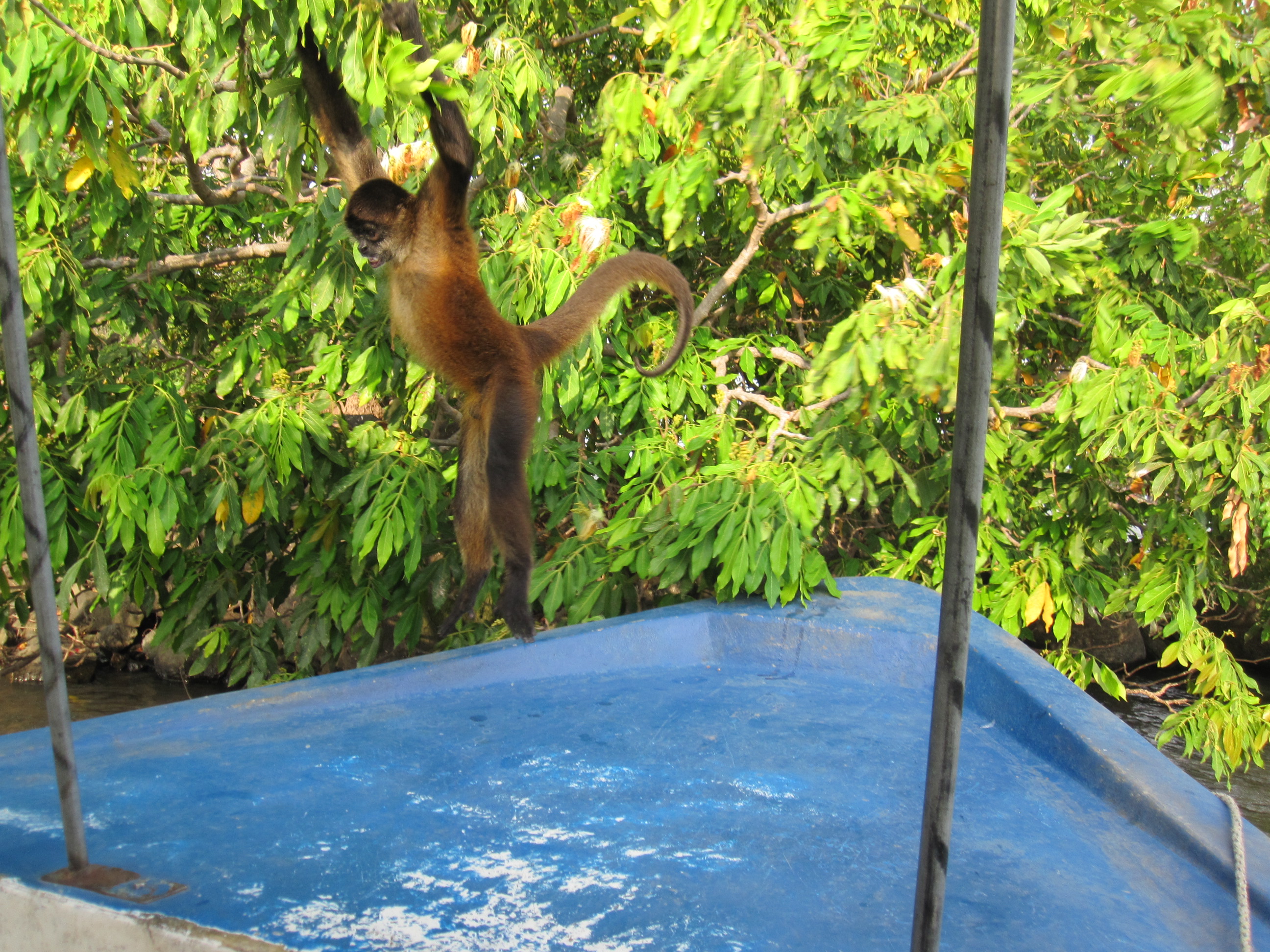 B)      Get Drunk on Calle Calzada – four of us played “you still have half a beer, I might as well get one more” for several hours in the open air restaurant/bars along Granada’s main pedestrian mall and tourist enclave. We also did our best to politely dissuade an army of entrepreneurs attempting to entice us into buying everything from candy, cigarettes and chocolate to necklaces, hammocks and plantain-flavoured condoms. Continuous entertainment included mariachi bands, teen break dancers, tall inexplicably-spinning mannequins and watching confused tourists try to decide between a dozen identical Pub & Grills with exactly the same combination of menus, plastic chairs and moist, grinning white people. 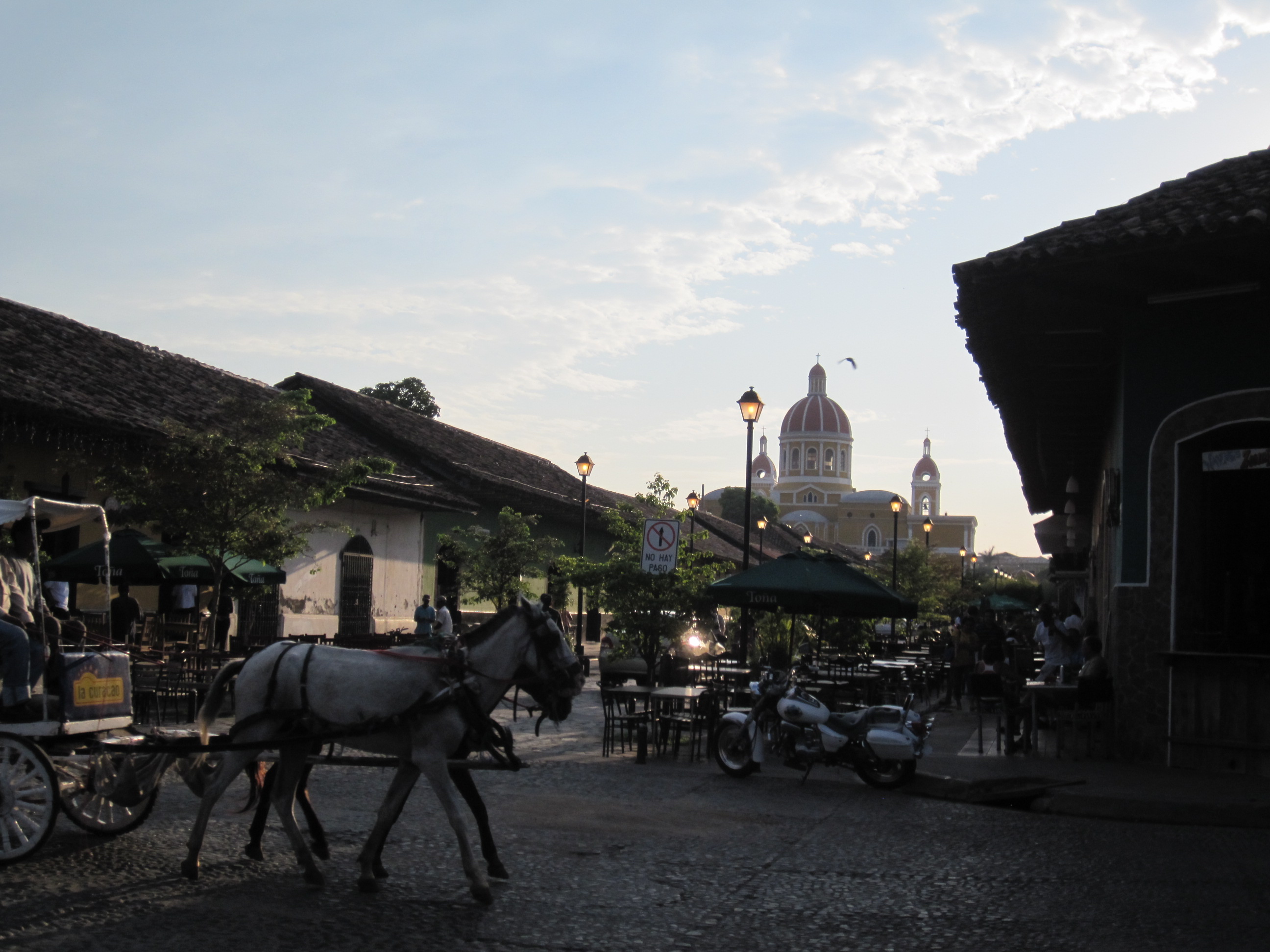 C)      Volcan Masaya Night Tour – wore gas masks to peer through the toxic smoke into the still-active Nindiri crater, followed by a hike to a viewpoint, some amateur spelunking (I hear the pros don’t resort to flashlights, and go the whole way in flippers) before finishing off at the Bat Cave. We took turns getting down on our hands and knees and working our way into the dark, damp mouth (just like my favourite scene in Another 9 ½ Weeks) where we’d crouch with our camera and protective helmet, surrounded by squeaking and feeling the breeze from thousands of bats storming past us into the night to explore, feed and troll for innocent young swallows. 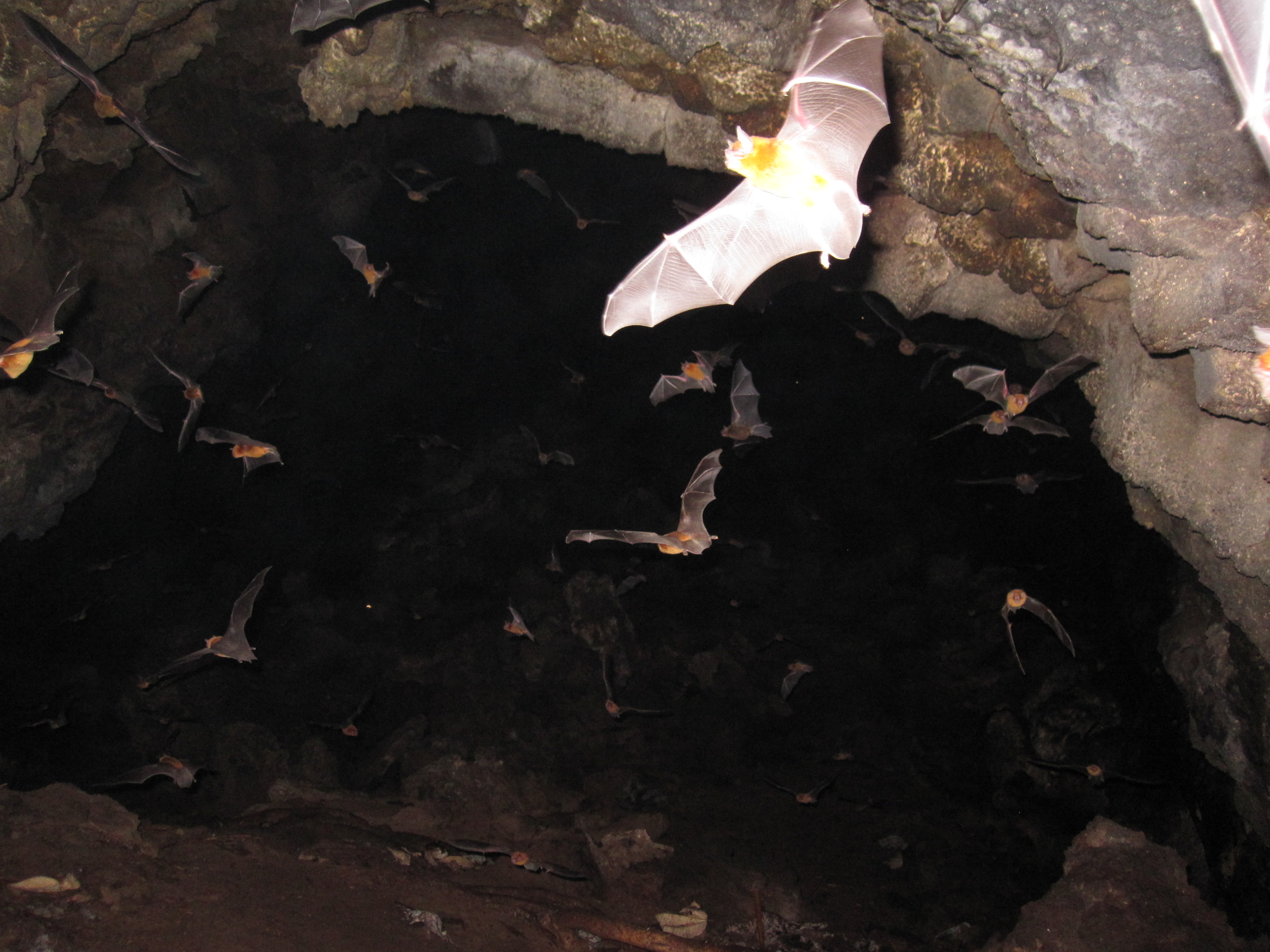 After a few days in Granada we headed south to Isla Ometepe, an incredibly scenic island with a massive volcano at each end, horrendous roads and a surprising abundance of Blue Jays (the actual bird, not the group of light-hitting men in tight pants that reside at Rogers Centre and get paid millions of dollars to disappoint hundreds of fans on a regular basis).

Favourite lunch soundtrack of our stay in Granada

Bad to the Bone

Shout (the Tears for Fears version) 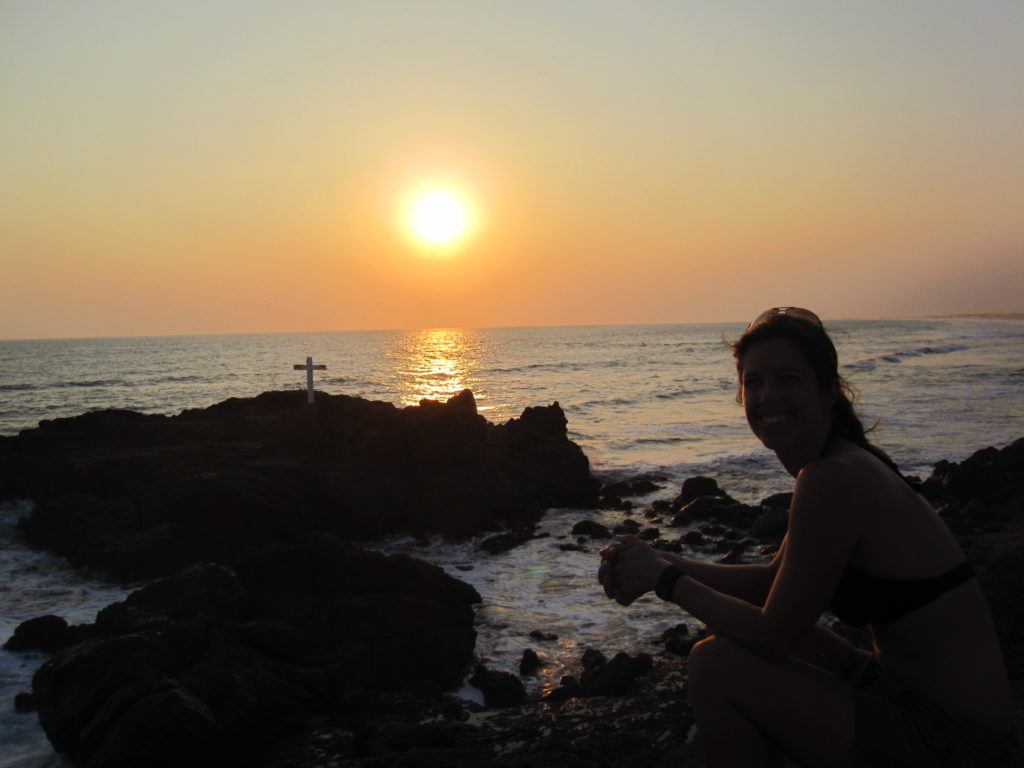 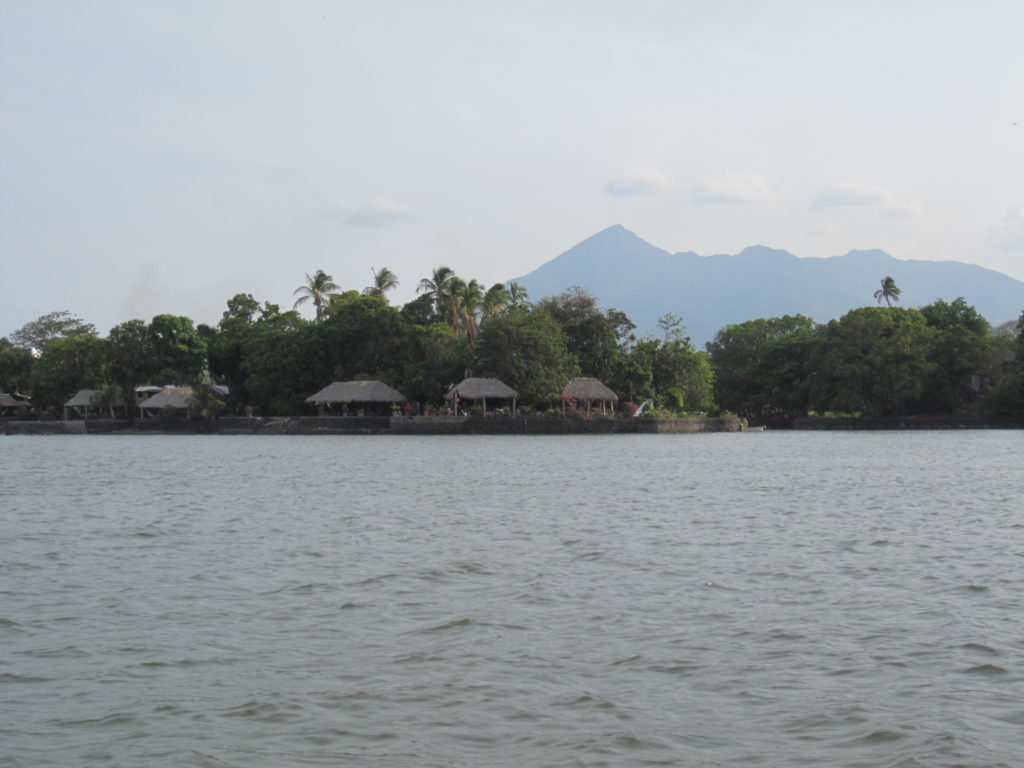 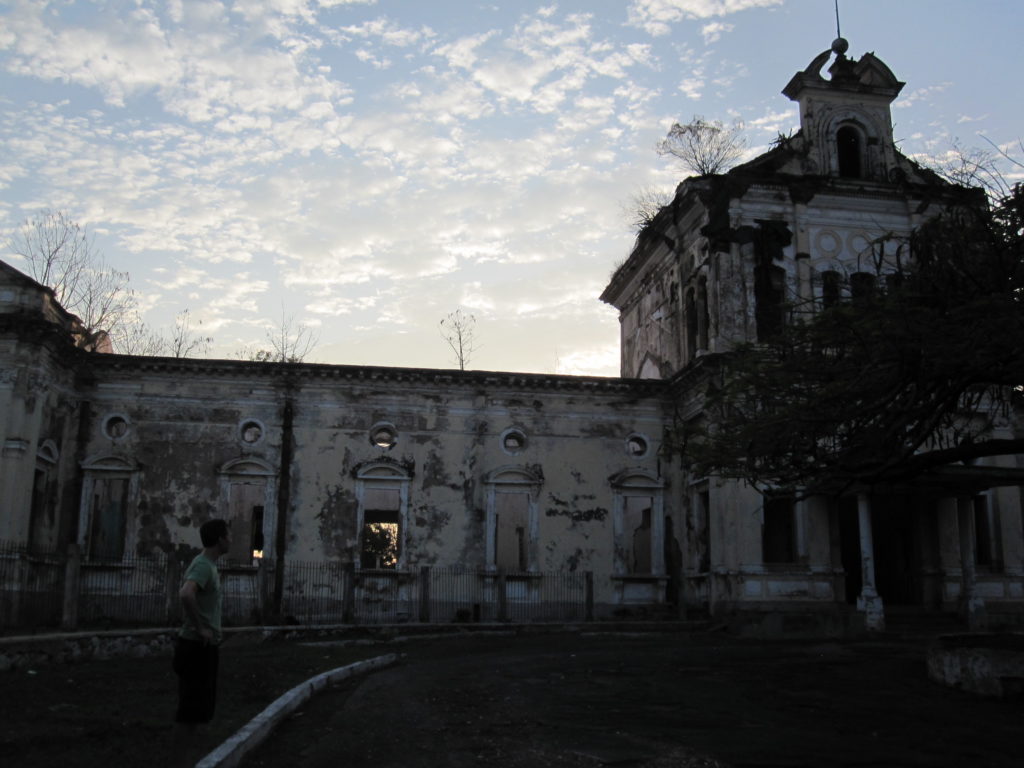 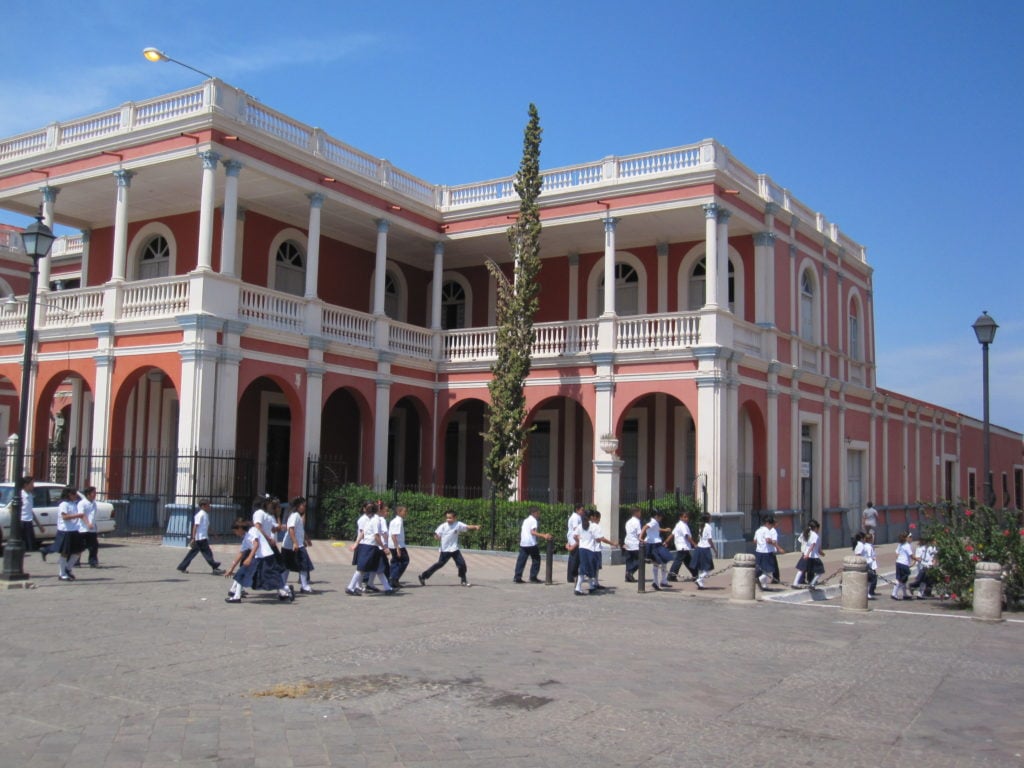 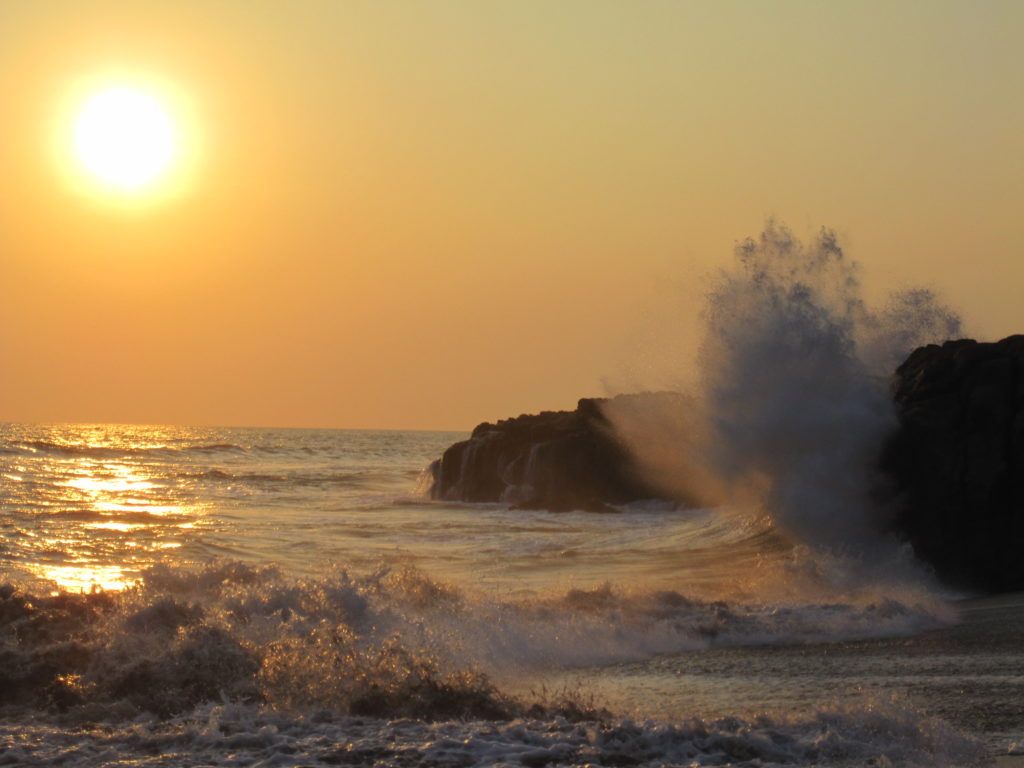 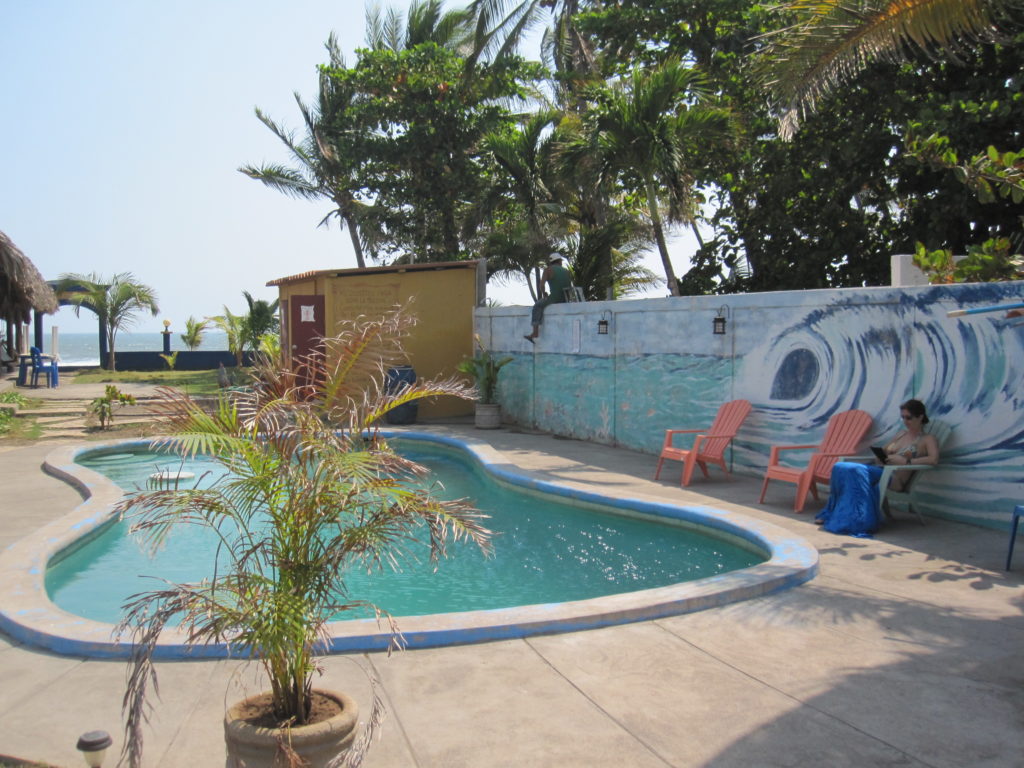 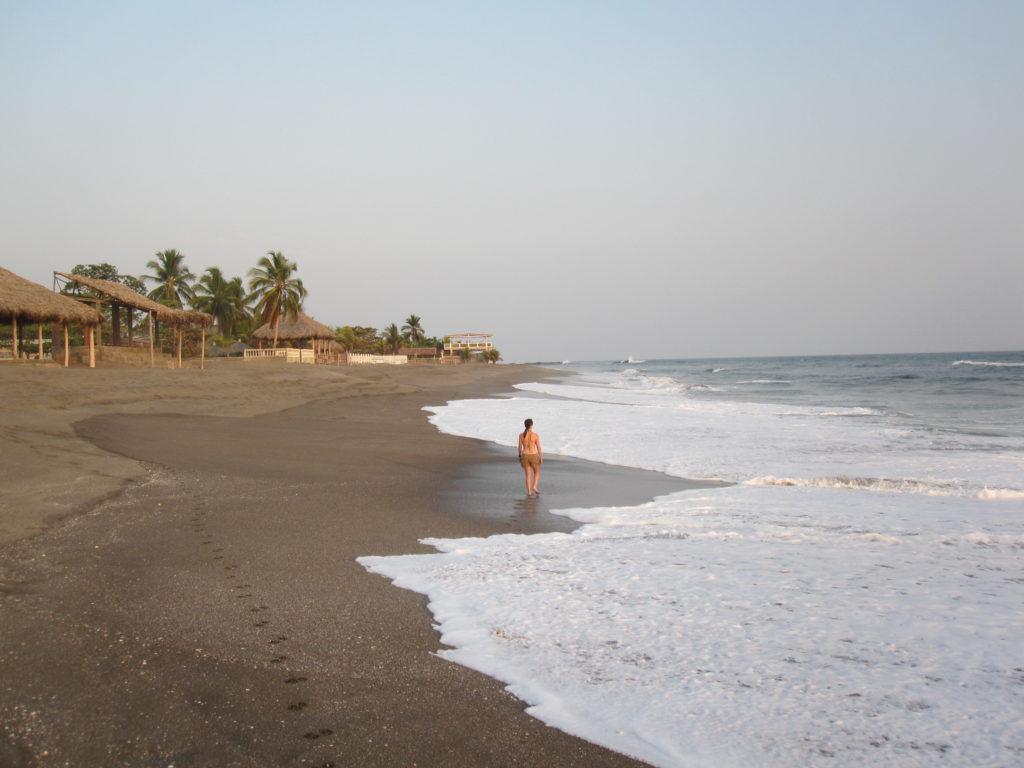 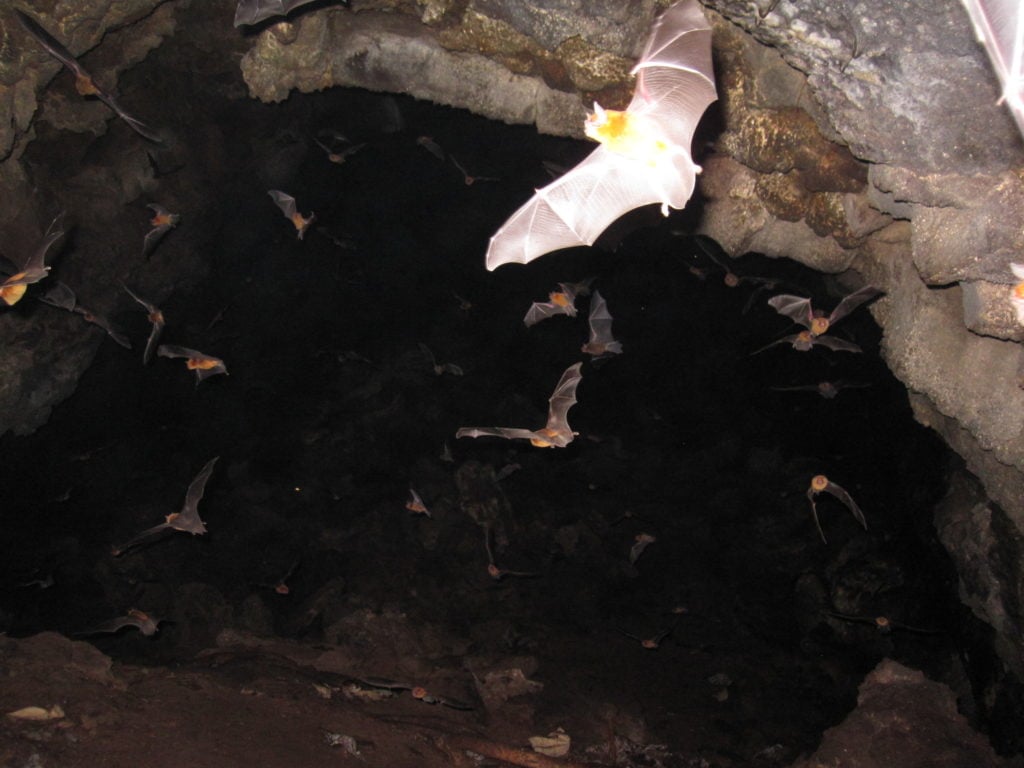 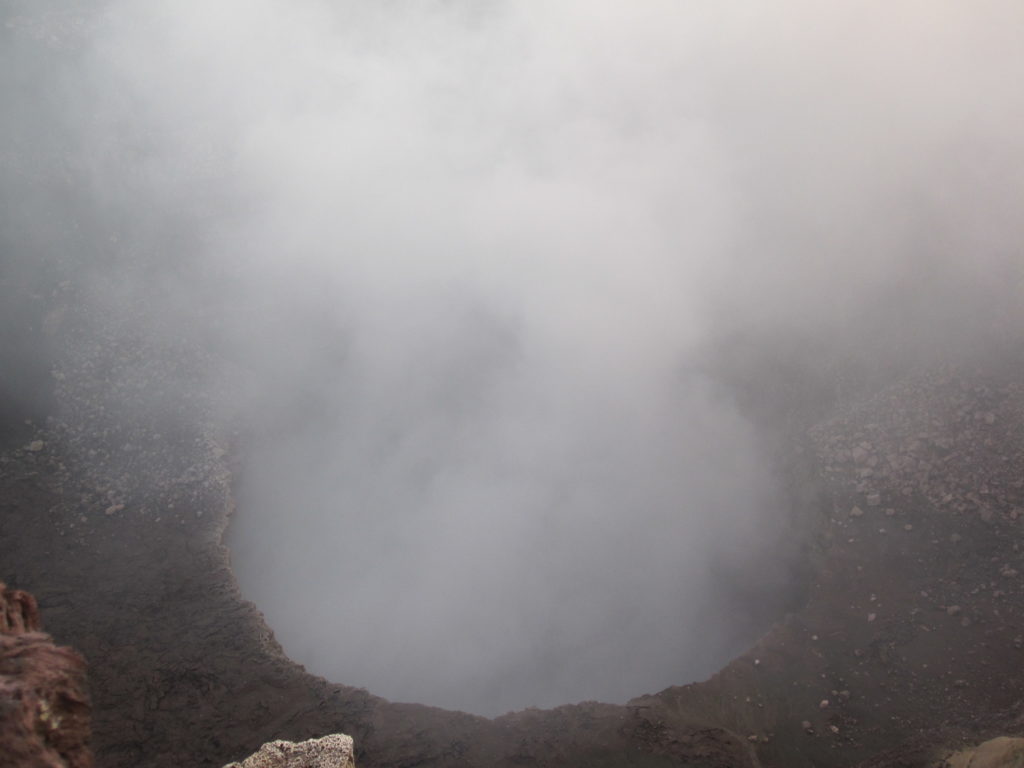 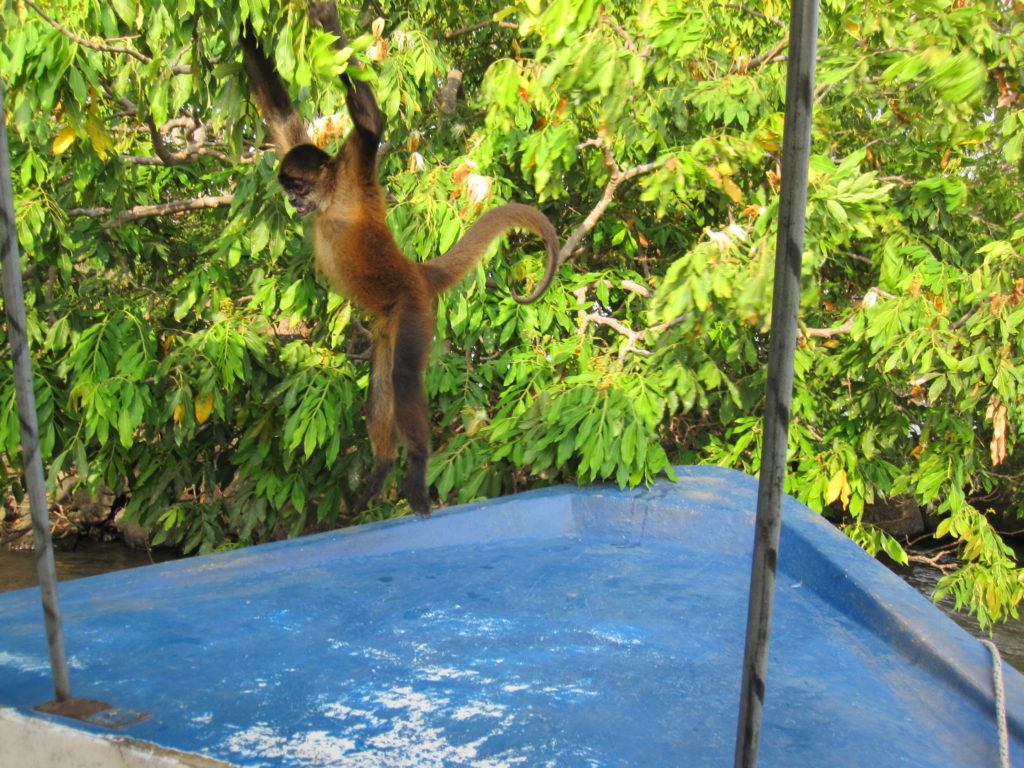 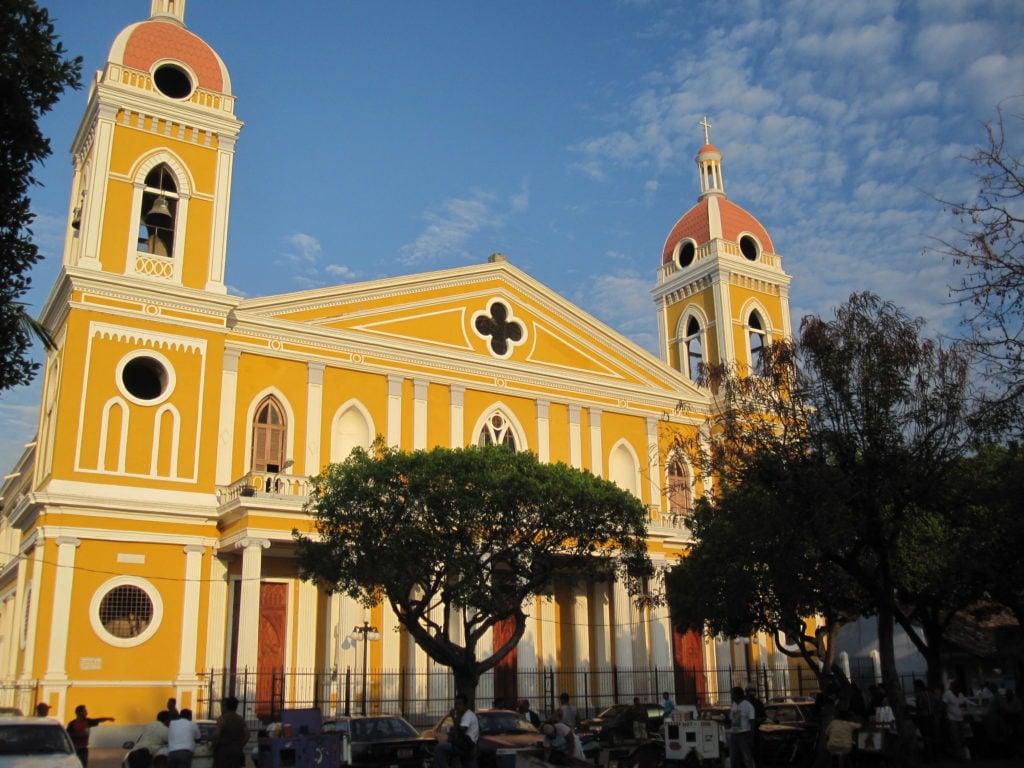 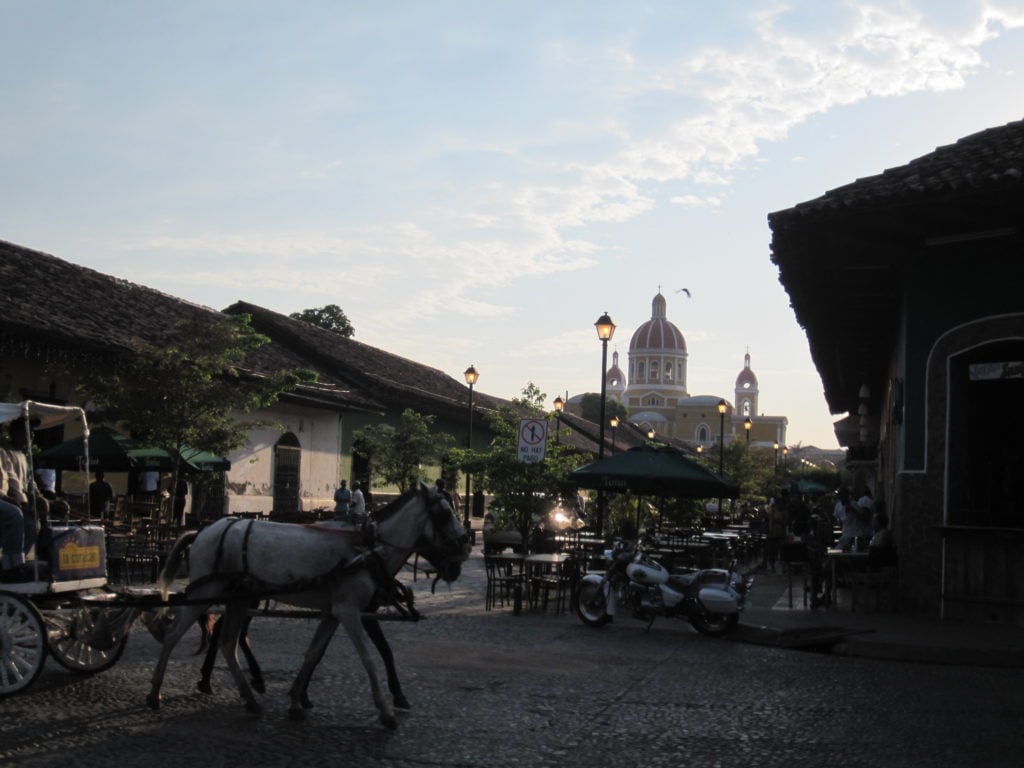