And the Donkey Says, “Buck up, Sweet Pea”

Well, with our Inca Trail adventure finally in the rear view mirror we took the train back to Cuzco where we spent a couple days in hiking detox – namely sleeping, watching TV and spending countless hours trying to repair / recover / revive our numerous failing electronic devices. When everything is working they are travel godsends (netbook, dig readers, MP3, 8-track) but when they crash? Let’s just say I’m just now coming off my very first digital stress cold sore. I’m not certain if this makes me one of the earliest Terminator models or not, but I strongly suspect it does.

Anyhow, from Cuzco we traveled to Arequipa which, despite being the second largest city in Peru, is still quite manageable and picturesque (I just now realized I hadn’t gotten around to using that word yet – my apologies). Not sure if it is “irresistibly sexy”, as the Lonely Planet describes it, although a couple of those fruit vendors did look pretty hot in their huge woolen shawls. While there we visited the well-preserved remains of Juanita, an apparently beautiful young Incan virgin who was ritual sacrificed atop a nearby mountain over 500 years ago. She was only discovered in 1995 when an earthquake shook her loose from the ice and she is was recovered almost completely intact. A monumental archaeological discovery. However, from a strictly aesthetic point of view half a millennium buried under ice did nothing good for her skin. Speaking of not very pretty, we also spent a few hours at Arequipa’s most modern movie theater watching “The Ugly Truth”. Overall I’d give the edge to the ravaged, desiccated body of the murdered virgin.

After a day or two there we continued on to the Colca Canyon, famous for its rare condor population and being the second deepest canyon in the world (behind only Cotahuasi, also in Peru). It is more than twice as deep as the Grand Canyon, fairly remote, and the local women all wear these awesome patterned hats worn with the front brim down, to protect against the sun, and the back brim up, to let you know they don’t take any shit and make killer quinua soup. The 200 km, 6 hr journey to Cabanaconde was our first real taste of “local-bus-ism” on this trip, which always share some broad similarities to go along with their local variations. For example, all around the world the luggage compartment is routinely packed with live animals – chickens in Indonesia, sheep in Morocco, pigs in Guatemala. So naturally in Peru – make room for the alpacas. It’s the consistency that I like. Mind you, watching a young girl struggle to stuff a reluctant alpaca under the bus was rather pleasant compared to the guy who opted to forgo the numerous hills, derelict buildings and inviting nearby shrubberies in  order to piss on the side of the very bus he had just emerged from, sighing in relief beneath our appalled gazes in the windows above.

Cabanaconde is a dusty little end of the road town which serves as a good base for hiking down into the canyon. Its the kind of place where a wild night means hearing both a donkey and a dog after dark. Our first day we rented mountain bikes and took them by bus up to the Cruz del Condor, the most popular place  to spot condors in the area. Magnificent views of the canyon, and there is a distinct possibility that we actually so a condor, or maybe a big hawk, well, we’re pretty sure it was a bird of some sort. Either way we weren’t too concerned since the point for us was the 15 km ride back to town, all gloriously downhill. The other 50 or 60 tourists, however, may have felt differently considering many of them had been since 3am to start their one day tour from Arequipa, driving 5 hours to gaze around longingly, hoping to will some condors into being with their mind and arming their cameras every time a branch shifted in the wind. The following morning we hopped on the bus again, but this time we just needed to get a few kilometres out of town in order to start our hike down into the canyon. Unfortunately, a slight miscalculation found us standing in the aisle at the very back of the bus with 40 to 50 bowling ball shaped women in curiously similar hats standing between us and the exit. Making our way back to the front turned out to be an extremely delicate maneuver, and there’s a small possibility that I inadvertently had just a hint of sex along the way. Whoa, sorry lady, my bad.

The hike was nothing short of spectacular, from the grand vistas on the way down to the quaint bridges and sleepy villages to “The Oasis”, a small collection of guesthouses nestled like a lush postcard at the very bottom of the canyon. We spent the night in a place that had a remarkably landscaped pool, a beautiful rock waterfall and grassy relaxation area. Yet our room had a dirt floor, bamboo bed and a spider the size of my thumb (my big thumb, no less). Nonetheless, we both still could have slept fairly well, if not for the curiously talented dog that spent roughly 3 to 4 hours howling along to Axel F. Plus, I was right in the middle of reading The Time Traveler’s Wife so all my dreams involved me moving around in time and space, as if they weren’t already strange enough what with the transsexual judge in a Yankees uniform sentencing me to 7 to 10 for “lookin’ so good!” and the corral full of hairless sheep. Not to mention the way it messes with your head when you can’t tell if you’re farting in the past, present or sadly similar future.

So it was that kind of night, just when we most needed to be spry and sprightly for our extreme hike back up out of the canyon. As usual, the biggest downside of any canyon hike – gotta come back up. Well, that, and a terrible lack of affordable discos. Anyway, we thought a good early start with fresh legs and boyish optimism was definitely the way to go. What we didn’t count on was the morning sun blazing down on us throughout the the 1,200 metre climb. A long 3 ½ hours later, as we lay in our hotel room weeping and pale like recently plucked chickens, who, let’s face it, know what comes next, we consoled ourselves by determining that we had just climbed the equivalent of 400 flights of stairs….in sand….sun….and altitude. Sometimes it’s hard to tell, but we really do like hiking, honest.

Roughly 12 to 18 hours later we dragged ourselves, twitching and staggering, onto an Arequipa-bound bus, ready for another dose of civilization. It was nice to be back in the city, far from the clopping of horse hooves, the wailing of disenchanted donkeys and the deafening silence of the country. Of course, there was no way to anticipate a family of vacationing roosters renting the room right behind ours. What are the chances, huh?

Now we’ve moved on to Bolivia (congrats to Laynni on her 30th country) and are hanging out on Lake Titicaca in a town called Copacabana (no, not that Copacabana). Talk to you soon.

p.s. It has come to my attention that in the last entry I wrongly insinuated that Kate plus 8’s breasts were ravaged by the demands of breastfeeding all those kids. Apparently, she didn’t breastfeed at all. Which means they just look like half-inflated volleyballs naturally. My apologies. 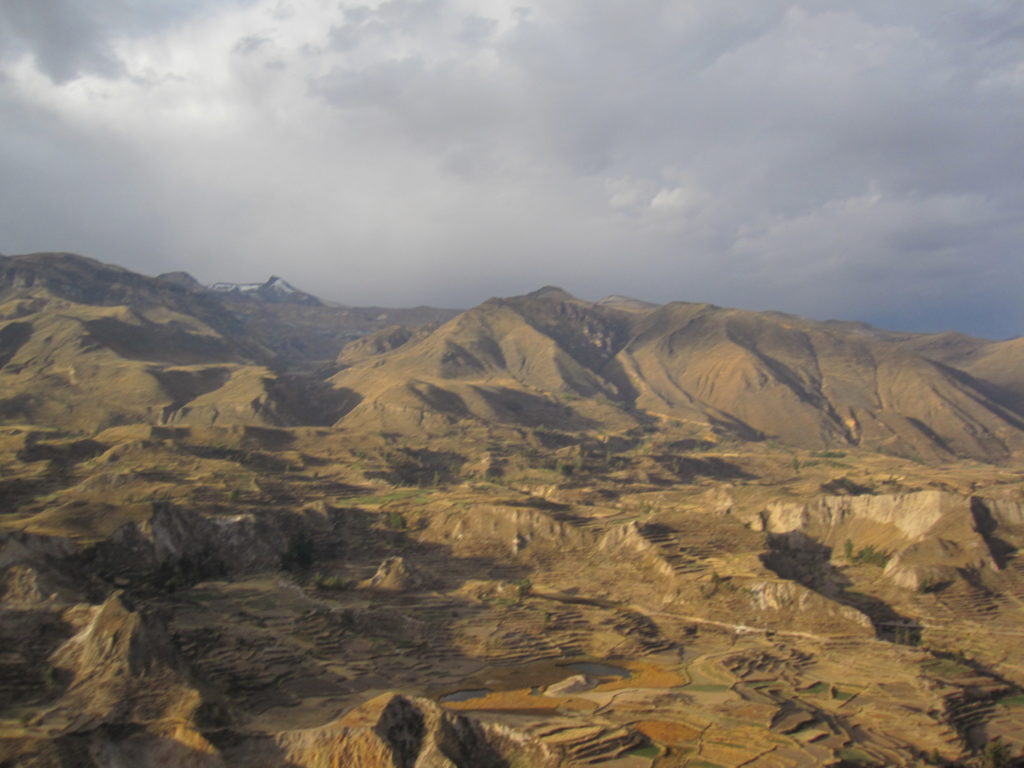 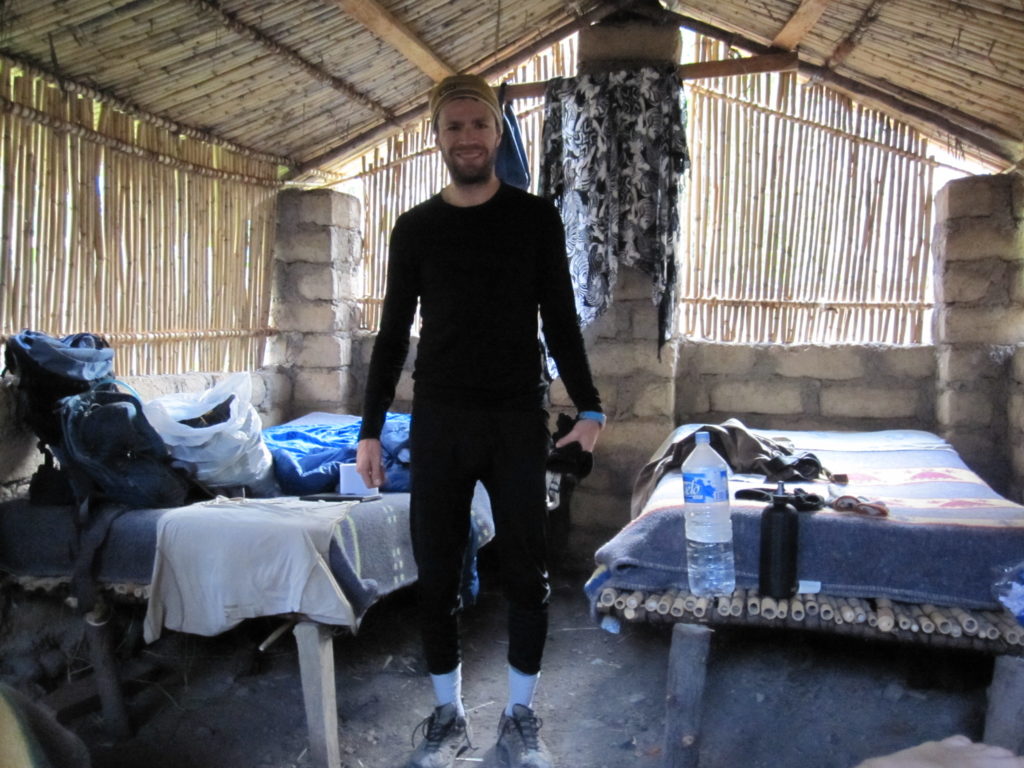 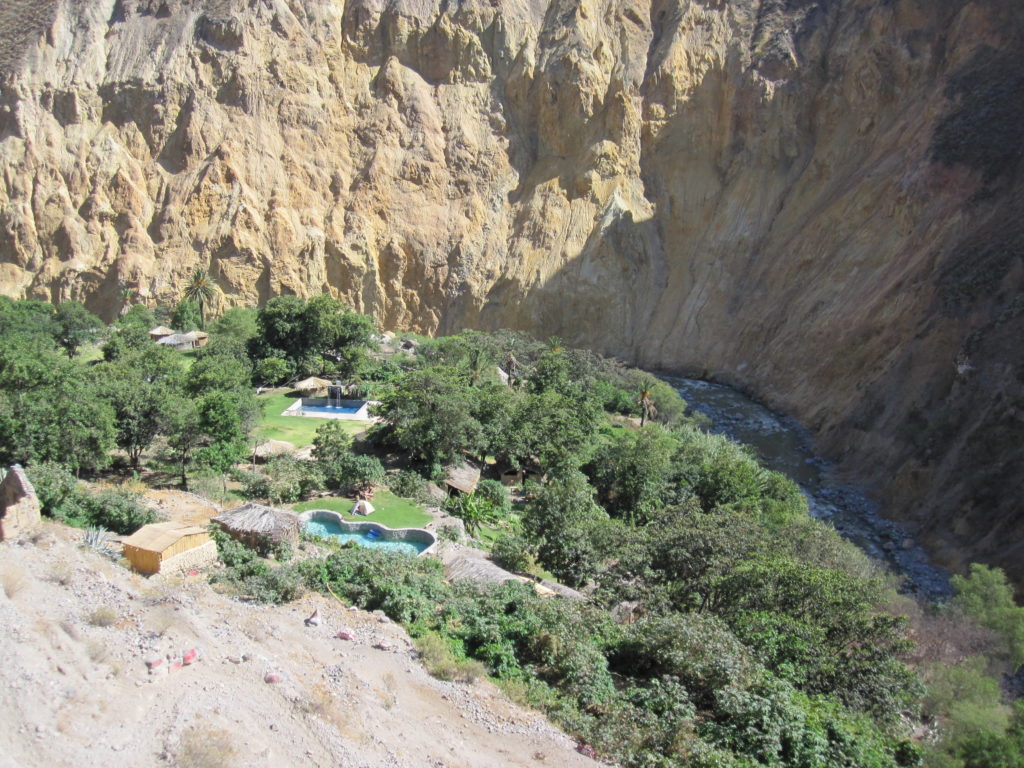 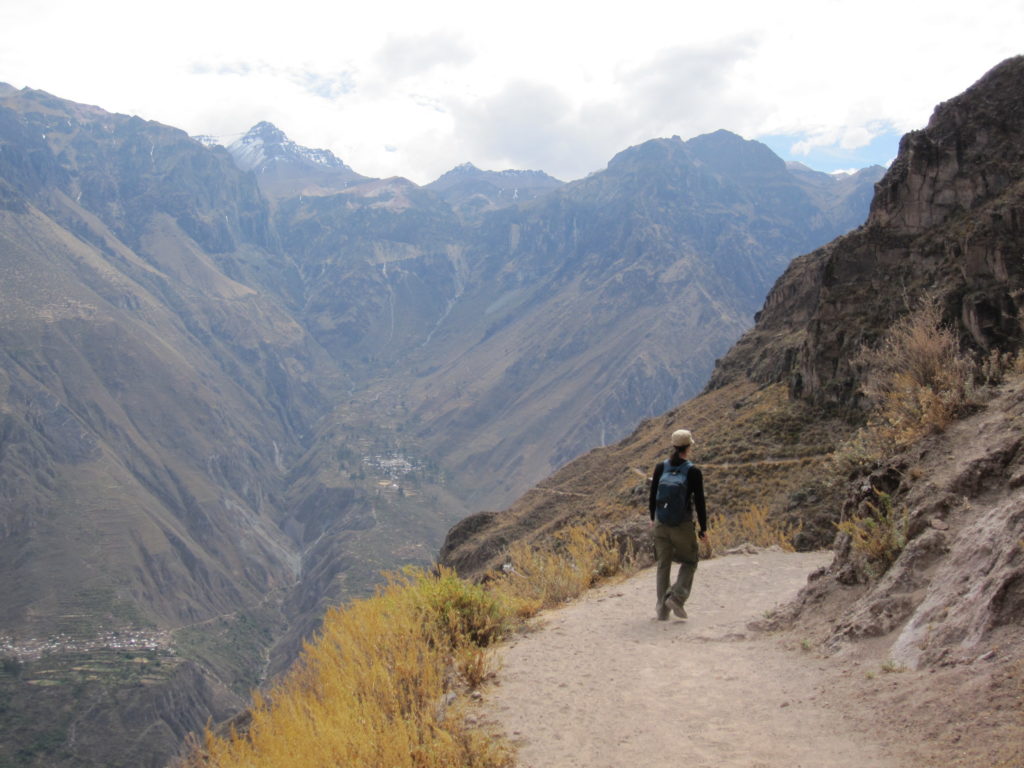 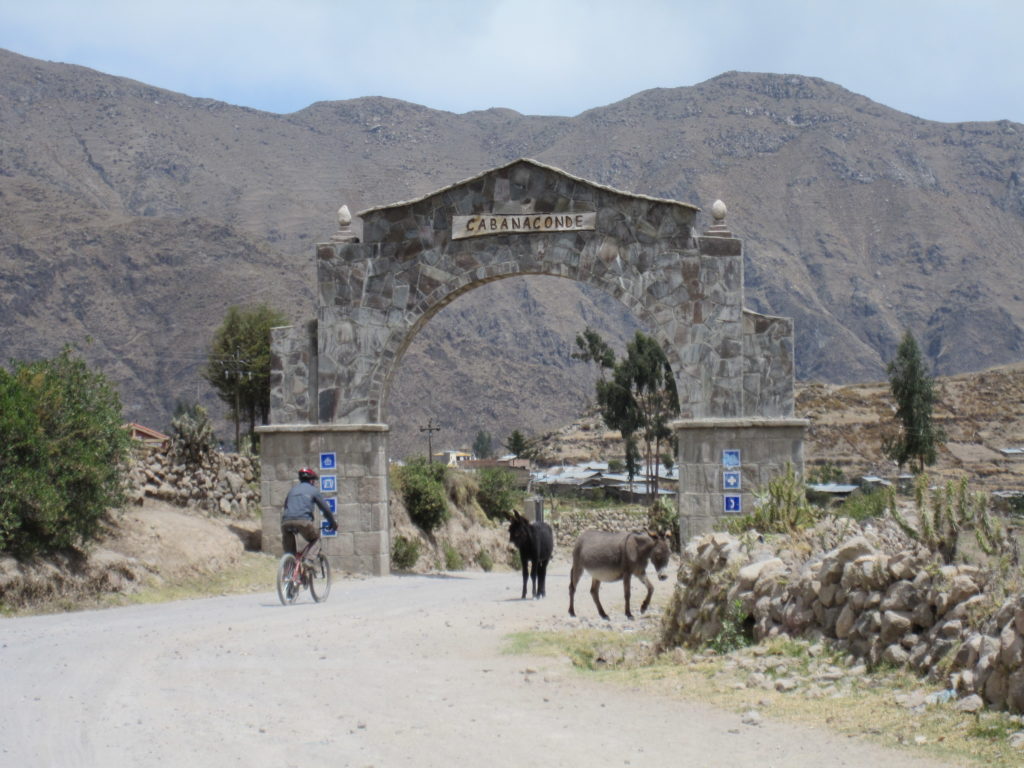 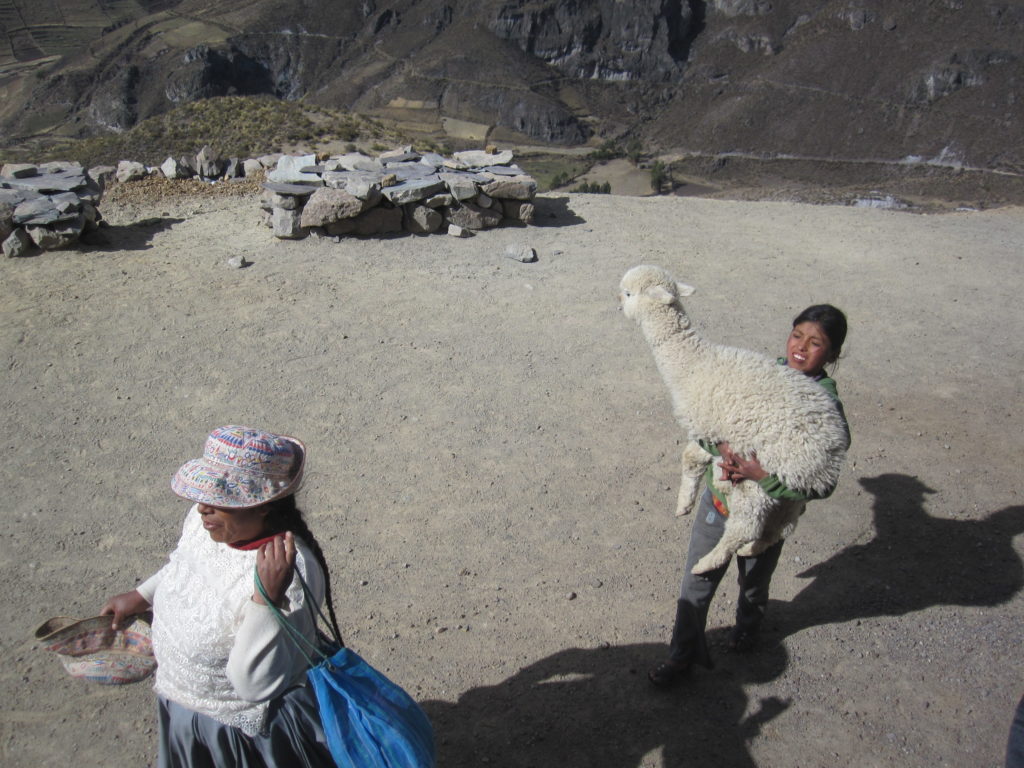