It says something when a country as historically isolated as Myanmar has a tourist attraction that is famous around the world. We had been looking forward to seeing Bagan’s thousands of incredible stupas scattered over miles of riverside plains for years and finally made it happen, hooking ourselves up with a peppy little electric moped (which we affectionately named Steve, although we rarely found it necessary to call it by name) to ensure ourselves unlimited freedom to wander among these ancient temples and monuments, including in the pre-dawn darkness, and often returning well after sunset as a wide variety of bugs smashed wildly into my face. However, at a location as visual as this one only Bagan photos will really do, hence…

This was our first afternoon in Bagan, still new to the feel of two of us on our “e-bike” and somehow managing to get ourselves onto what turned out to be the worst path we saw throughout our 4-day stay. Rutted, and covered in a thick layer of fine dust which had our tiny narrow wheels slipping and sliding like a baby deer on skates for the first time, and me with my feet jutting out to the sides like a flesh catamaran. When this photo was taken we had finally struggled to emerge onto a decent dirt road, then had to creep over into the edge of the shrubs to let a long train of horse carts pass by. There is a very set route taking tourists around the temples in horse-drawn carriages just prior to sunset, even stopping in exactly the same spots, one after another, to take exactly the same photos. Funny to watch, although they actually were good photos, so once we stopped laughing we sheepishly took some of our own.

One of the many haunting views in constantly changing light from the top of one stupa or another. Only a small percentage of the ruins had accessible upper levels, and only a small percentage of those actually allowed people to climb up. Without really thinking about it our mission soon became clear – climb everything we could as though we were hyper children seeing how much idiocy it takes to mentally break their parents. Or, in our case, mentally break the nervous souvenir vendors who rightly assume that having a couple dumb tourists fall to their (presumably painfully drawn out) deaths would put a dent in their sales for the day.

Although we eventually discovered at least a dozen decent sunset locations, for the most part the majority of tourists congregate at 2 or 3 of the most popular spots (possibly since very few have a full 4 days to explore and anally catalogue the options). By 5pm these otherwise grand old structures would resemble the roof of the last emerging roof in a flood, except with the multitudes of humanity jockeying for space wielding large, expensive cameras instead of priceless family heirlooms, or a flare gun.

We simply couldn’t get enough stupa-gazing, newly mesmerized all over time and time again by the sight of these 800-year old buildings poking up through the surrounding foliage off into the distance like your favourite old wart poking up through a thatch of toe hair.

One of the only disappointing parts of the whole experience was the way many of the temples were completely overrun with local sales touts. You expect to see a bunch of shops outside the entrances, and maybe even a couple unobtrusive stalls on the way in, but this went far beyond normal opportunism. In a few spots, such as our favoured sunrise stupa, guys had the entire thing covered in their generally nice but basically generic monk paintings, eliminating all the best places to sit and enjoy the view, not to mention inserting them into all the best camera angles like two-dimensional photo-bombing monks, or maybe very economical network product placements.

Considering the size of the area and the distance between sections we found the freedom of having our own transportation outweighed the safety concerns of time spent on the busy traffic of the two main roads, or the locals’ unwavering belief that tourists and helmets don’t mix. These bikes were cheap ($US4 per day), the battery easily lasted all day and our hotel charged them up each night, and they were much quieter than the more powerful gas models. Sure, the seat and suspension were built for two people in about the same way the toilet in your master bathroom was made to share, but we rarely spent more than 20 minutes or so at a time, mostly so to take breaks to complain about how much our asses hurt.

One of approximately 8,442,178 Buddhas scattered around Bagan. There were so many, and in so many variations, that it is at least remotely possible they actually outnumbered French and German tourists. But we can’t be sure.

Sometimes climbing up as high as possible meant navigating not just dark, narrow, claustrophobic staircases, but occasionally even squeezing through some tiny openings that were possibly never intended to feel the sweaty, slippery skin of perspiring Caucasians. Lucky for us, a couple months of facing the culinary challenges of Mongolia, Bhutan and the Everest region had done wonders for our bodies’ abilities to fit into places they weren’t really designed for, not to mention underwear that were never meant to be baggy.

One of the most popular, not to mention extortionate, activities in Bagan are the sunrise balloon trips. Despite somehow convincing ourselves to spend the price of a decent used Winnebago on 10 days in Bhutan, we just couldn’t will ourselves to spend $US 400 each for an hour floating over the temples amid a congested group of other balloons. Based on photos we’ve seen, however, the views are justifiably spectacular and the whole ride is often described as “an experience of a lifetime”. Of course, I’ve also heard the same description applied to commercial dolphin-chasing boat trips and photographing hill tribe women like they were animals in a zoo, so it’s safe to say the phrase is occasionally overused. Nonetheless, by my very rough calculations, this enterprise generates somewhere around $US 50,000 per day for local businesses so, as they say, if it ain’t broke, don’t fix it. Plus, we were also able to get some great photos of the balloons from our much lower vantage point on top of one of the quieter stupas, so whether riding in the hot-air balloons or watching them, it was a win-win. Although no good for local clowns, as their crappy helium balloons don’t compare well.

This not-so-great photo is of an elderly woman, probably in the 110-120 year old range if I had to guess, nimbly climbing out of the depths of one of the larger temples through the narrow ruins of a former doorway. Usually we resist suggestions from local guides and such, never knowing just how potentially awkward and expensive this “help” is going to end up, but something about her wizened little face and surprising enthusiasm convinced us to follow her in through the tiny hole where we then used her flashlight to explore the musty remains and do our best to ignore the dozens of agitated and angry bats we had so inconsiderately awoken from slumber. Needless to say, it smelled a lot like bat-ass in there.

After a couple nights maneuvering for prime sunset positions high up the side of precariously crumbling ruins, on night three we opted to hire a boat and driver to take us out on the Ayerwaddy River (one of many spellings) to usher in the darkness instead. This, of course, was hardly revolutionary as we were joined by 20-30 other boats who all drove about half an hour upriver then quietly floated back down to town as the sun slowly dropped behind the horizon shedding constantly changing light on the stupas and temples visible on the other side. In keeping with usual Burmese bargains, the two of us obtained the use of a boat built for at least 20 normal people (or 12 Dutch people, or 9 residents of Houston) for about an hour for the exorbitant price of $US 9. We also stocked up on a couple large Myanmar beers, partially to enjoy during the journey, but mostly just because our guidebook told us to.

We spent one full morning roving around the dirt paths, rickety fences, horse-carts, alms-collecting monks and shiftless dogs of Old Bagan. To be honest, we only really intended to make a quick pass through, just to see the contrast with New Bagan, where we were staying, and where the inhabitants of Old Bagan had supposedly been transferred to a couple decades ago when the area began to emerge as a popular tourist draw, but when all was said and done we ended up lost for a solid couple of hours. Actually, it turned out we weren’t technically lost, per se, it just took us a long time to realize that the reason we couldn’t find the village was because this tiny, ramshackle collection of huts actually was the village. Once we finally realized that, though, we were able to relax and truly enjoy the way those carriage horses were able to piss so hard that the spatter could reach your pant legs all the way across the road.

Bottom line, Bagan ranks right up there with all the ancient architectural greats – Angkor Wat, Taj Mahal, the Pyramids, even the musty basement of our former home on 3rd Avenue. Glad for the advice we received from friends who had visited it previously, and happy we blocked off enough time to really see it thoroughly, it was definitely the highlight of our time in Myanmar. Not counting bald female monks, of course. 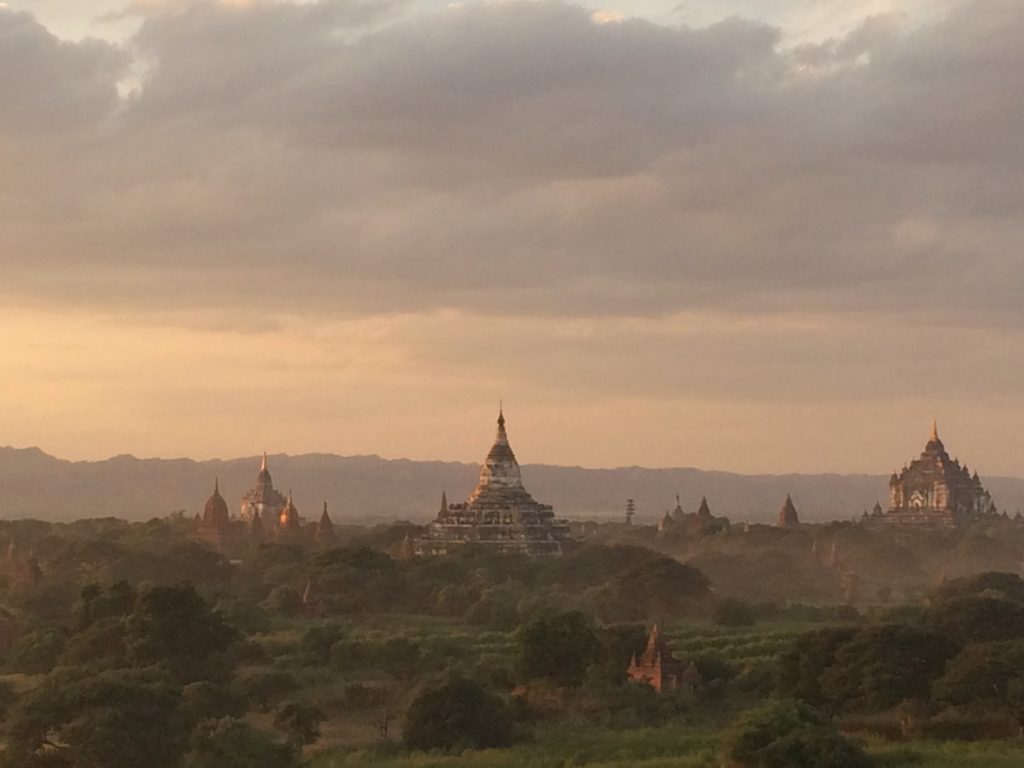 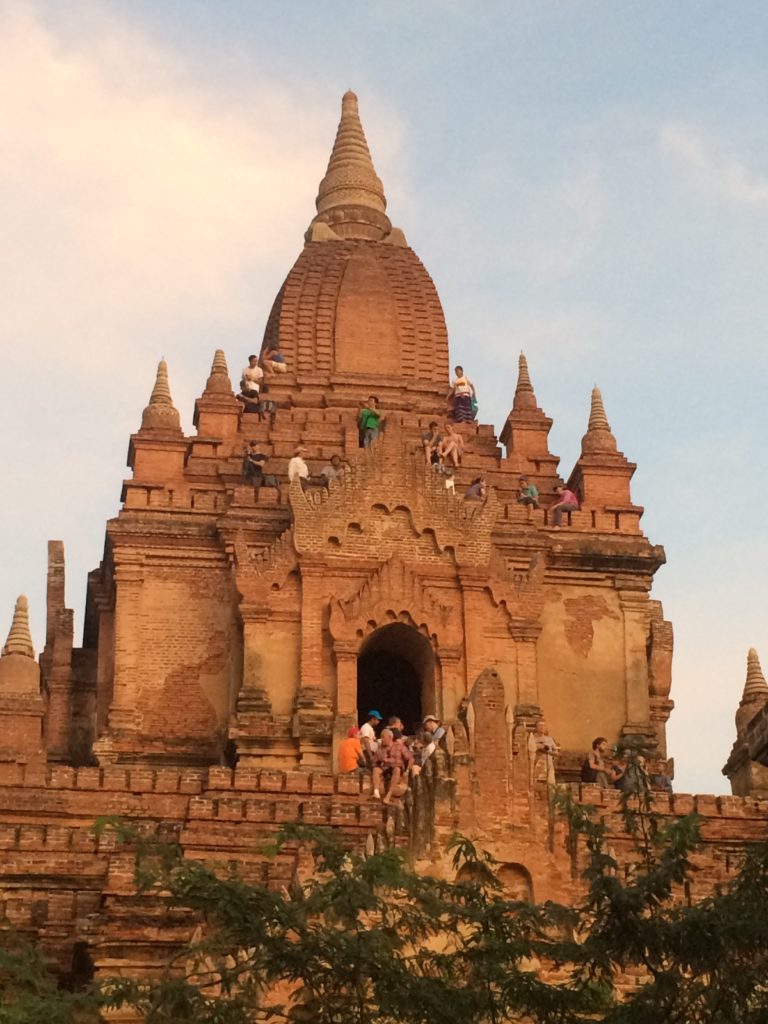 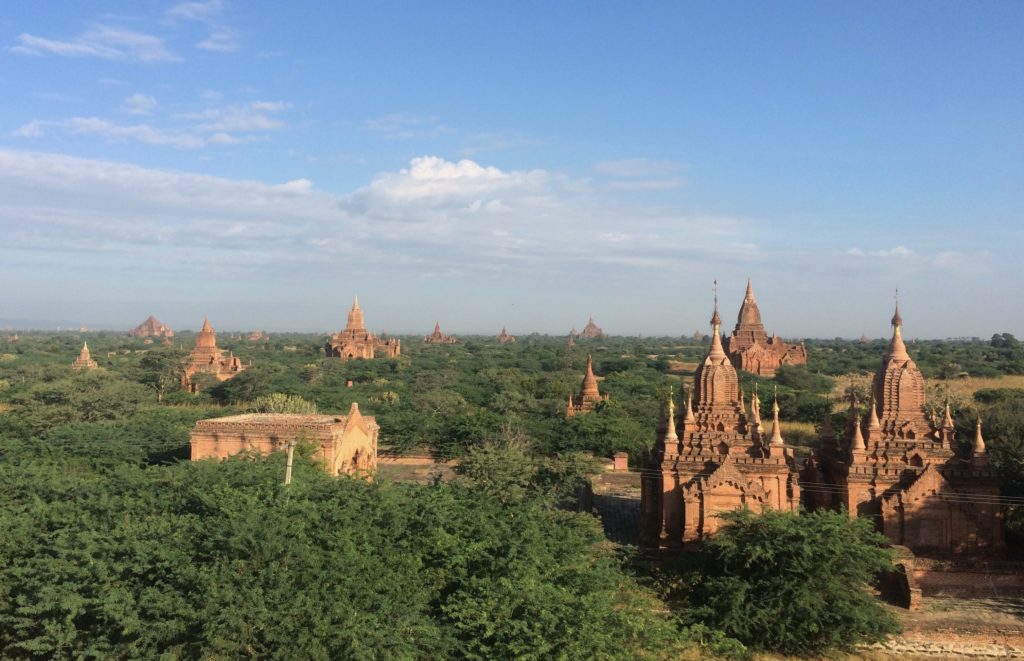 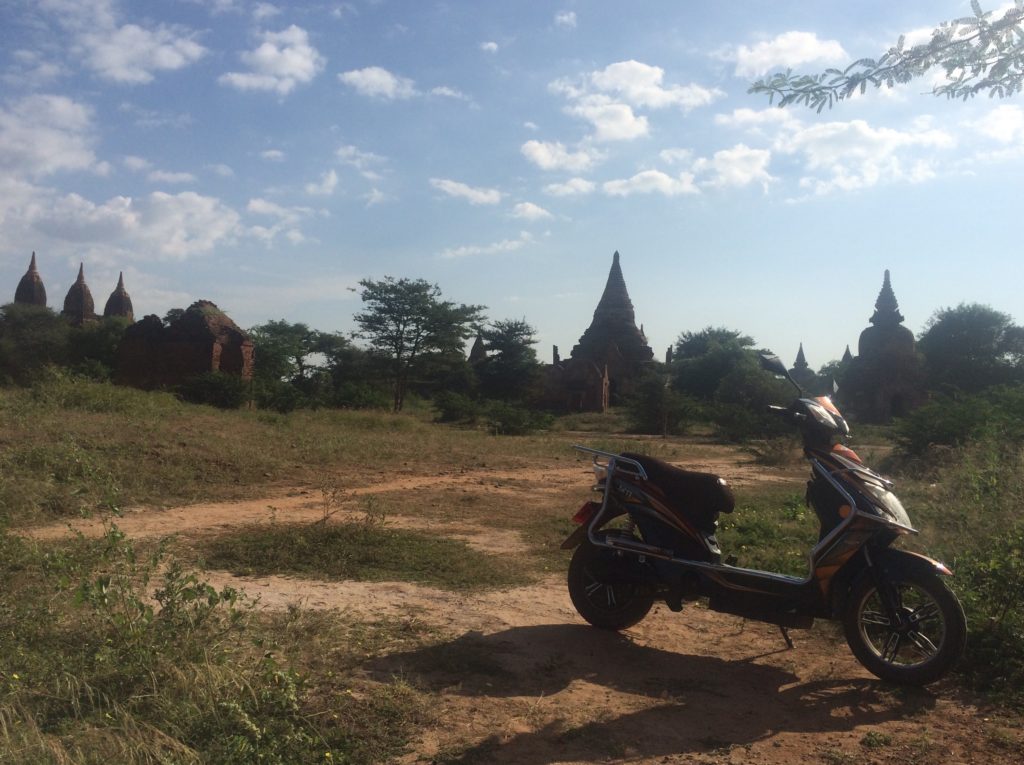 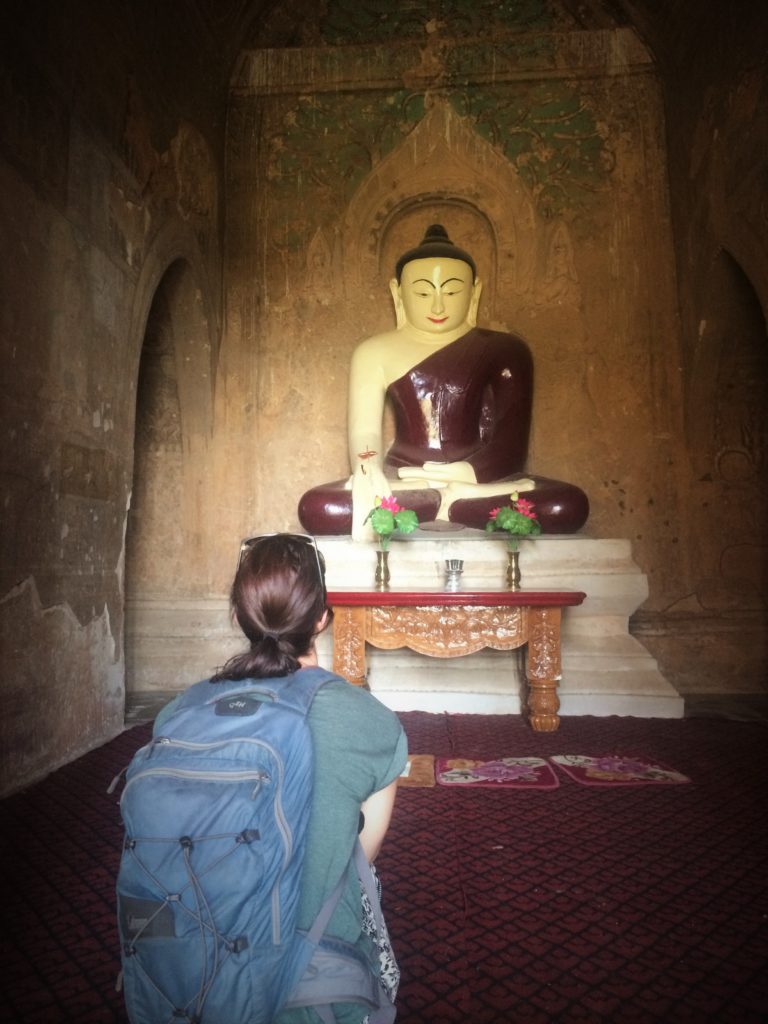 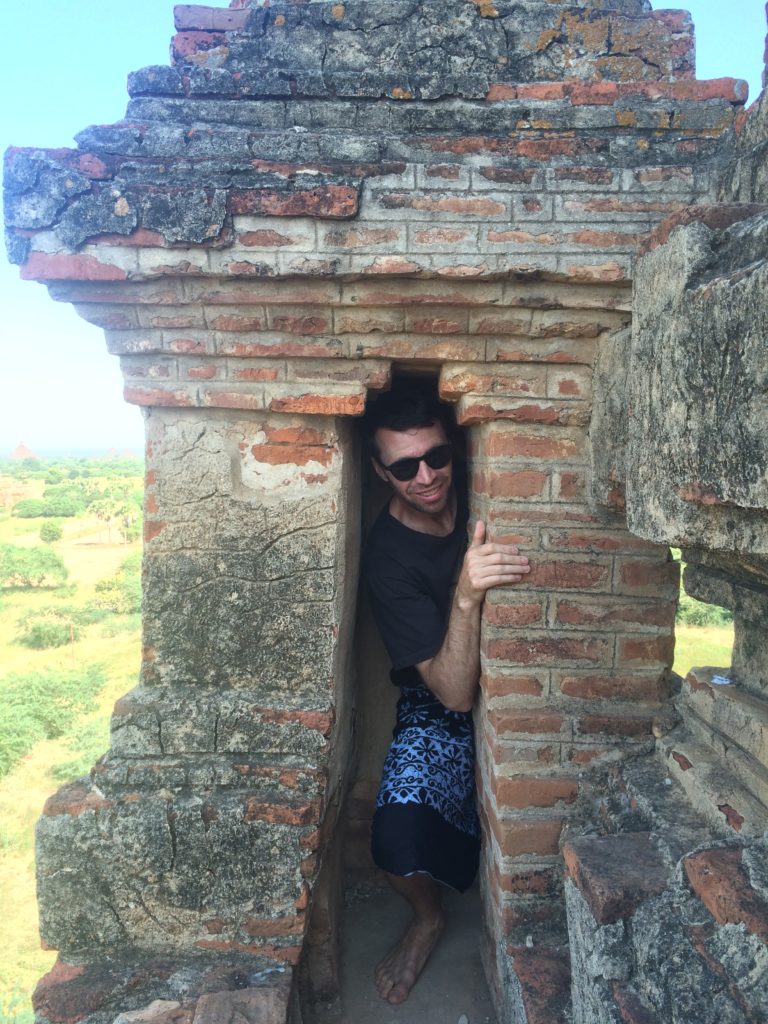 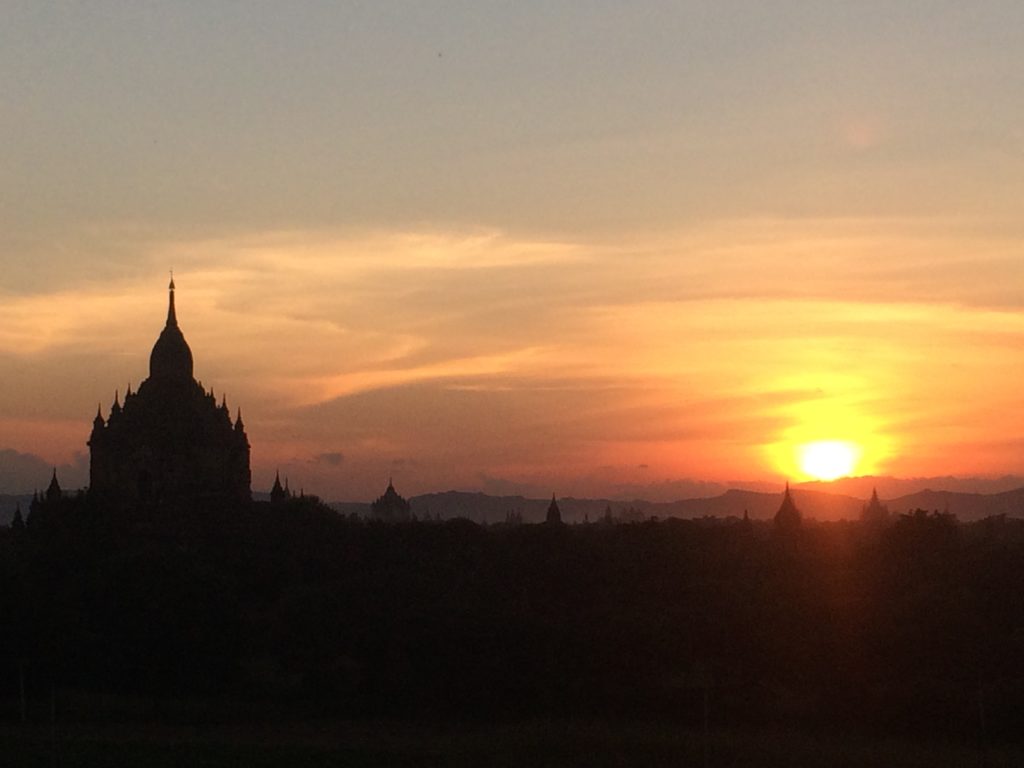 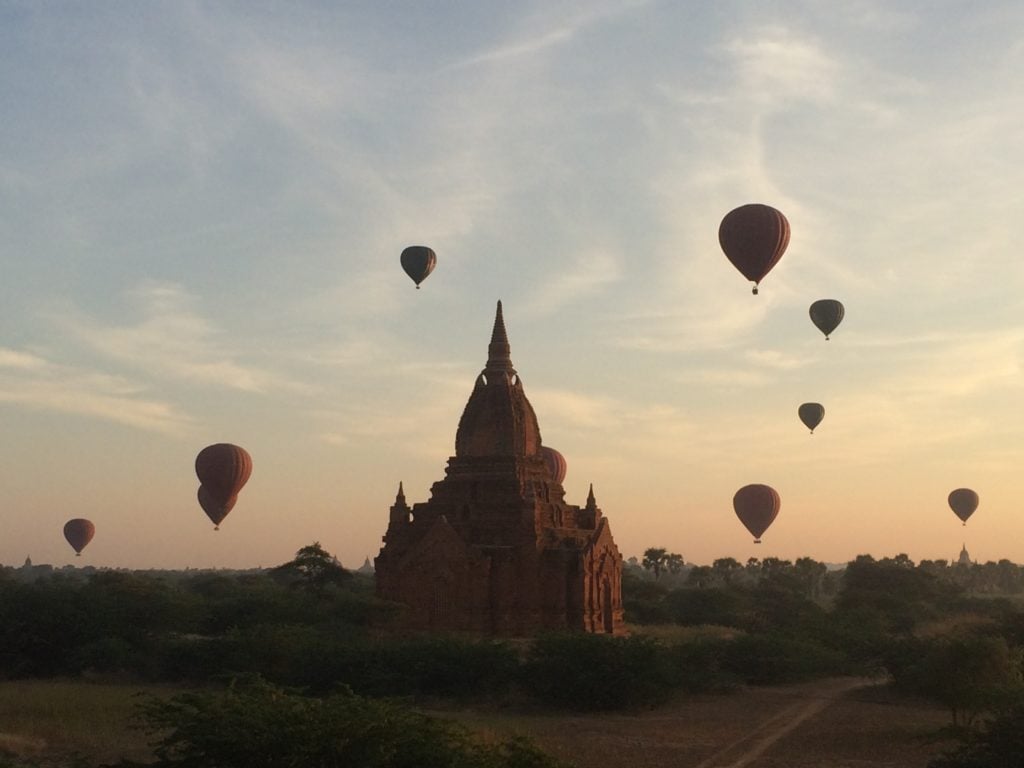 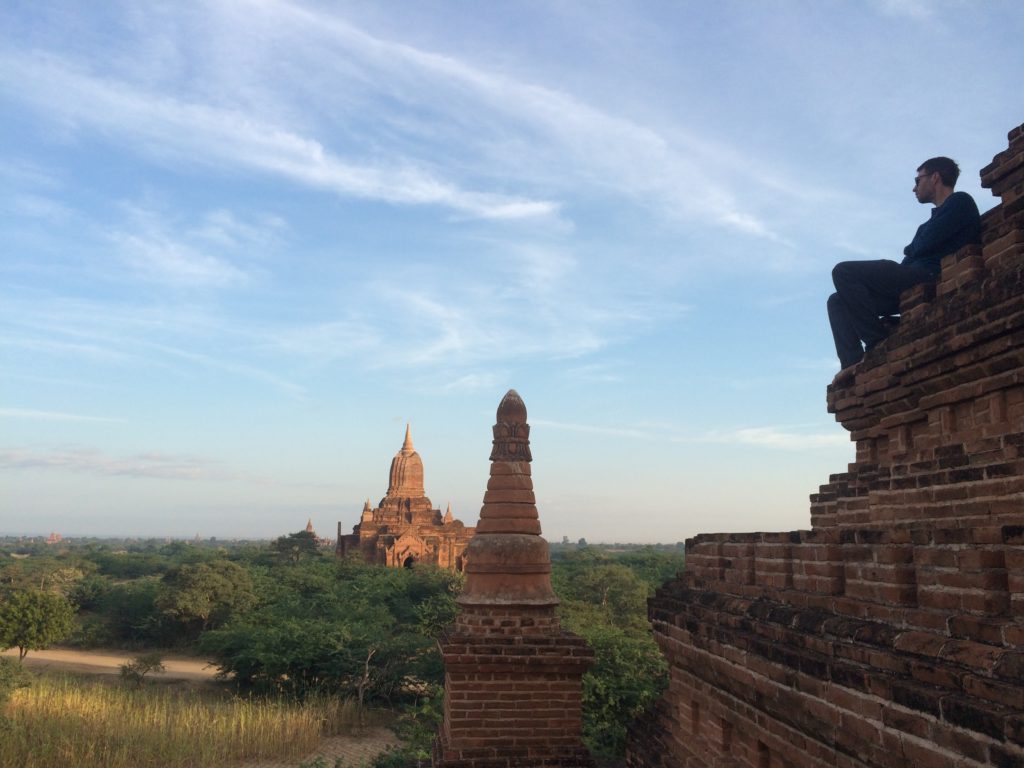 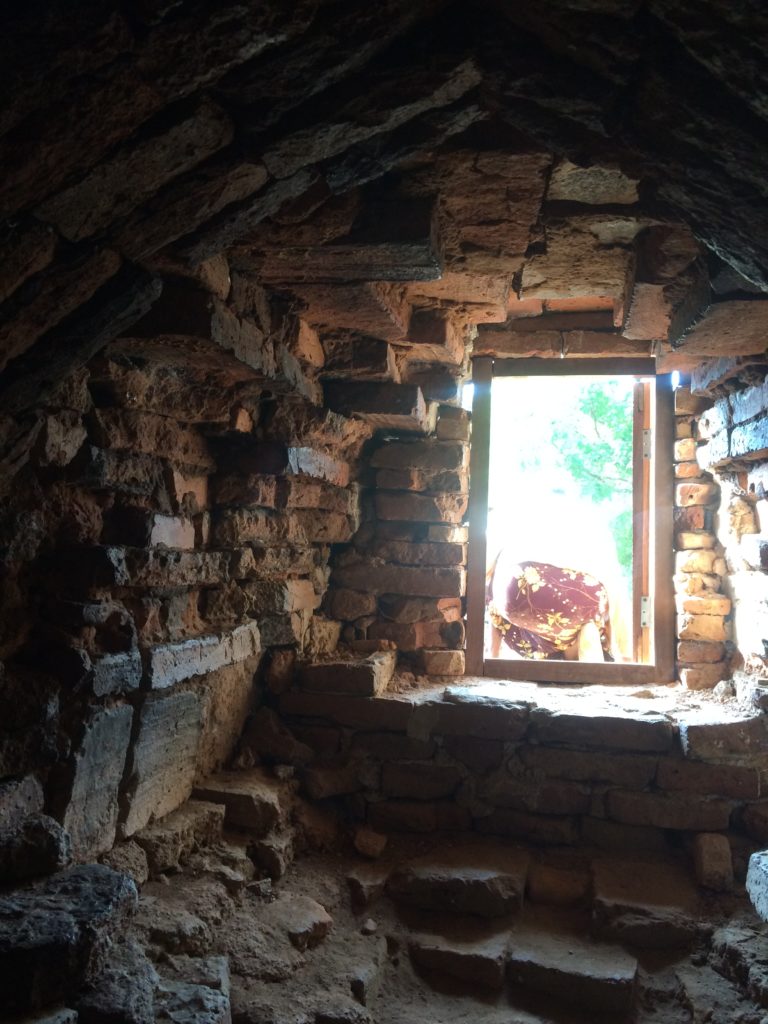 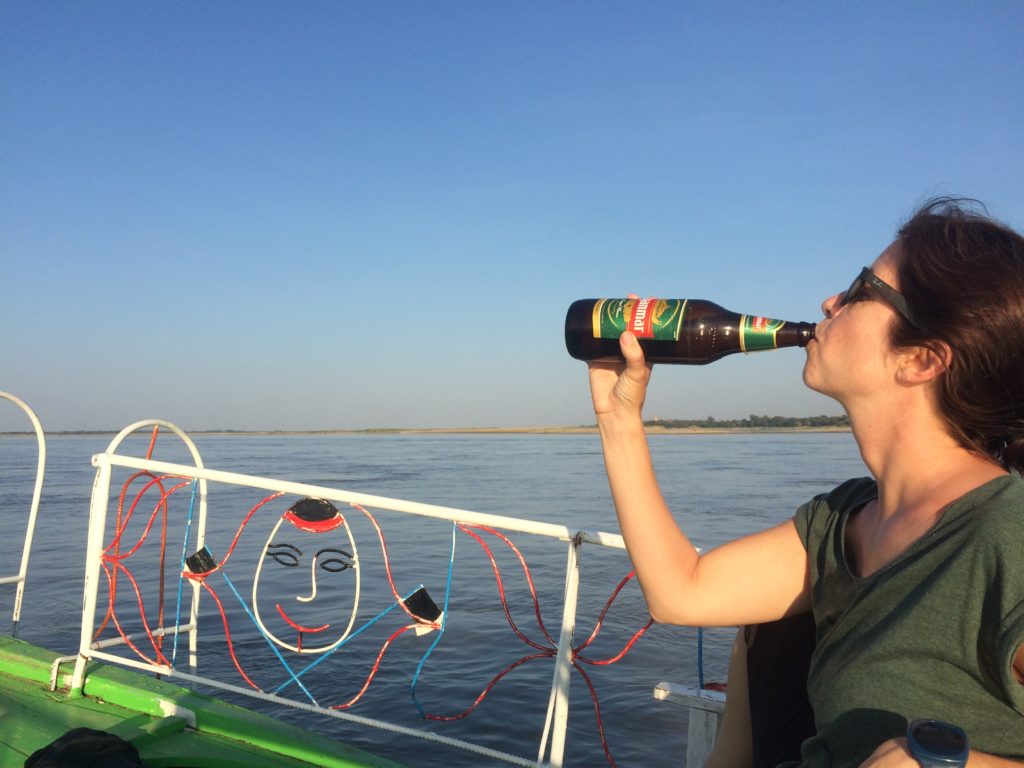 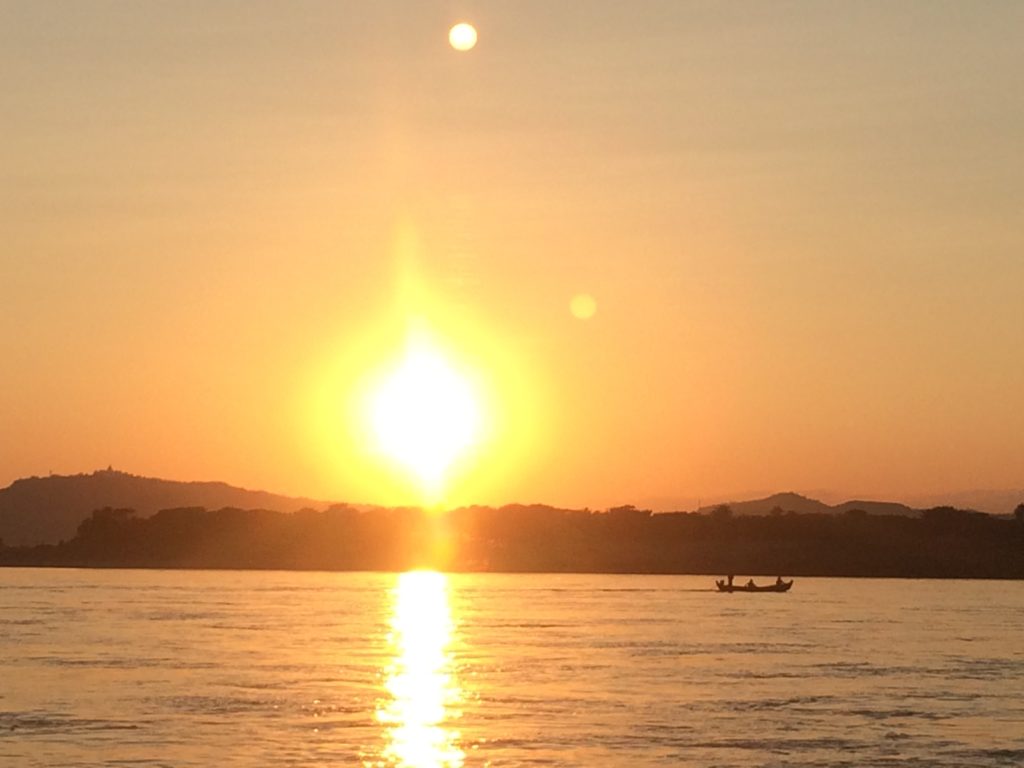 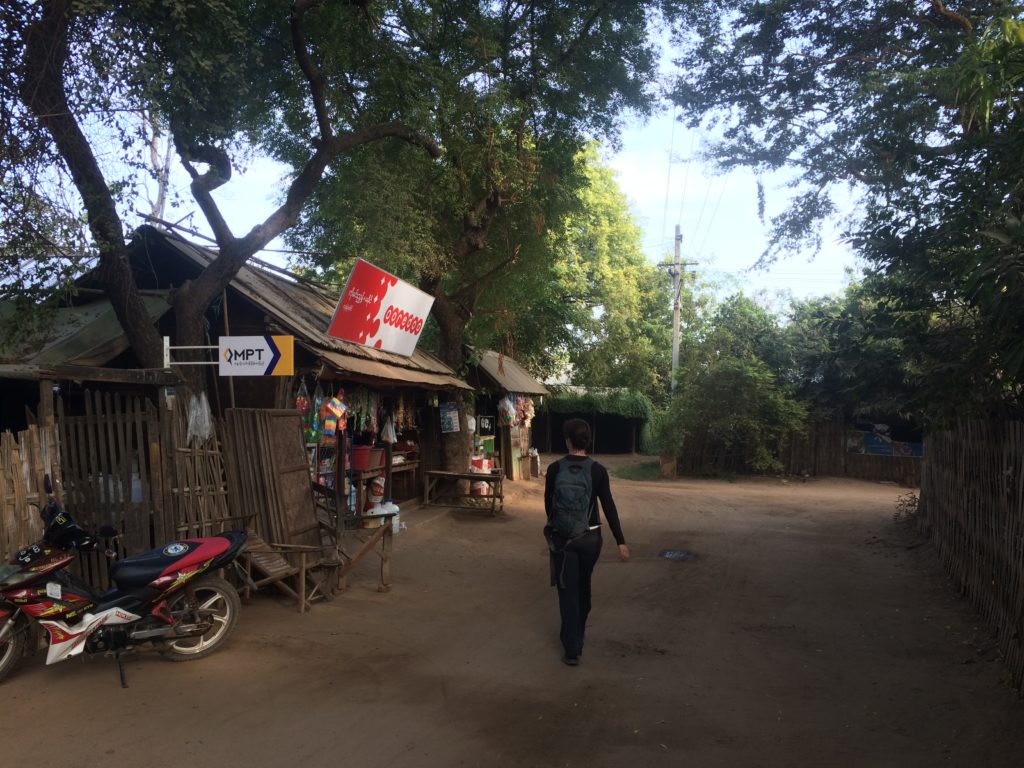 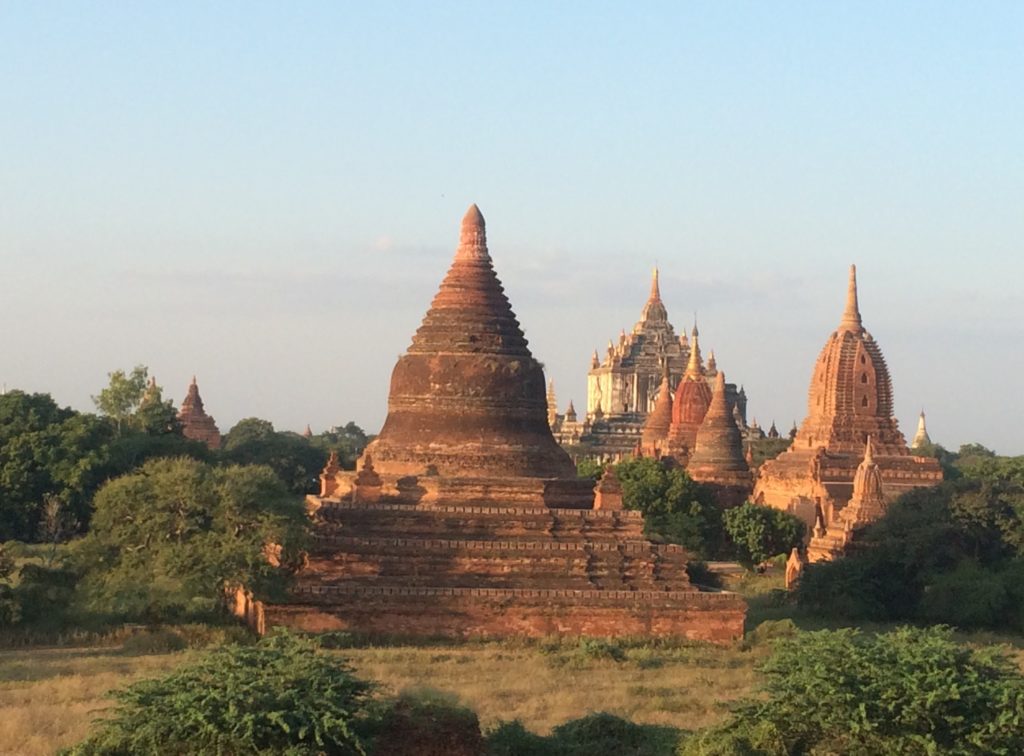 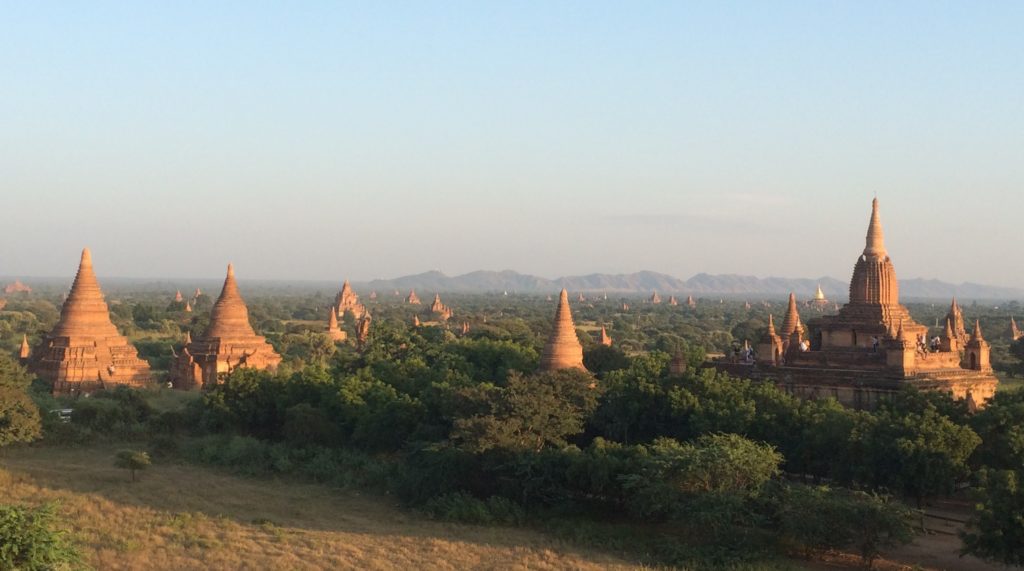 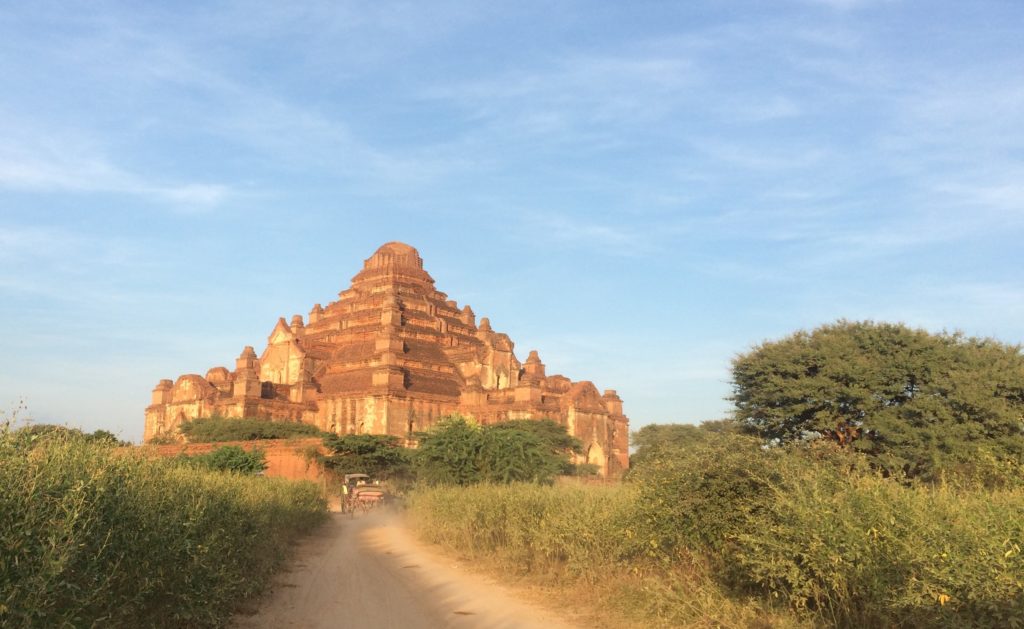