Bahamas: A Little Shark Diving on Your Mind

A little late on the ol’ update but things have been kind of hectic since we got back late Saturday night from our shark diving trip to the Bahamas. And the unfortunate part about free internet (at the South Beach Hostel, our home away from home in Miami) is that you can’t justify staying on it for long stretches at a time while people are waiting for their turn. Anyway, a general overview: the trip was a lot of fun, great shark diving, more sharks than we had seen in all our diving combined to this point, along with eagle rays, sea turtles, giant grouper and snapper (I know you just chuckled, Mike), barracuda, fantastic coral, and the usual array of massive schools of smaller fish that we never remember the names of and don’t bother to look up even though they are, inevitably, far more entertaining than some giant shadow passing quickly out of sight in the distance.

So, we started out in Miami Beach for a couple days, toyed with the idea of a day trip to the Everglades but decided that was too much work for too short a time and settled on a couple hours on the beach along with the other sun-starved tourists (it was cloudy, windy and about 22 degrees, far better than Saskatoon’s “-50 with windchill” but not really beach weather for those with more than one day to choose from), some wandering around the usual South Beach sights, Ocean Drive, Lincoln Road, etc. We even got to interrupt a model photo shoot by walking through the middle of it, and although we didn’t see any “stars” per se, we did see a lot of limos. For all we know one of them just may have contained someone like Gloria Estefan, or maybe even the lab chick from CSI Miami. We’re also thanking our lucky stars that we just happened to be there for “Art Deco Weekend”. Apparently all the Art Deco hotels were having a special, well, maybe they were hosting some events, um, or maybe something new was being built, no, …….well, actually I’m not sure what was different, or if it is actually possible for South Beach to become MORE Art Deco, especially just for the weekend, but it sounded like quite an event, that’s for sure. We also extended one of our least interesting streaks: on every trip, regardless of how remote, exotic or commonplace, we manage to find time to visit a theatre and watch an American movie that could easily be seen in downtown Saskatoon (that Topher Grace is just so dreamy!).

Saturday we embarked on a Blackbeard’s Cruise where we joined 21 other divers and 6 crew members on the 65ft Morning Star sailboat. I’m sure that even the most math-challenged among you can see that didn’t leave a lot of square footage per wet-suited wannabe. Nonetheless, Blackbeard’s has been doing this a long time so the boat, the system, and the crew are all pretty efficient at helping 29 strangers co-exist in perpetual motion. As for that end of things, Laynni insisted we take dramamine before crossing the Straits of Florida to nip any sloshy-gut feelings in the bud. Probably a good idea, and most others were likewise prepared, so there was only one incident of liquified exhalation (at least above board). I do have to admit that, although we generally had little problem with the rolling seas, later on in the week there was an occasion when I refunded my breakfast orange back to nature. However, I’m pretty sure that had as much to do with the previous night’s various shades of rum and mystery beer as it did with seasickness.

I mentioned rolling seas, and in fact that was the theme for the week, as the wind stayed uncomfortably strong pretty much the whole time, with our only respite coming on a couple overnight shore docks and the odd stop at a sheltered beach where we could actually pretend to be in the Caribbean for an hour or two. I had imagined clear skies, balmy weather, people begging to stop the boat, and could we just jump in and cool off for a minute, please? But, alas, the glossy travel magazines had no place here, as we reluctantly crawled above board in all the clothes we had, made faces and swore, rapidly stripped, and shimmied back into our damp wetsuits as the cursed wind cut through us and our nipples threatened to poke through the 3mm of neoprene. Good times, good times. On the bright side, being under the water was like a warm, cozy bed in comparison to half-naked on deck. It was just the anticipation of re-entering the atmosphere and once again disrobing at the wind’s mercy that soured things.

The best part of the trip was the great group of people. It is fairly unbelievable to me that you can cram 30 people, all ages and from all walks of life, on a little boat like that and not really have any problems, or at the very least a couple retards that drive everyone up the wall (assuming we weren’t the retards, I mean do those people ever really know its them?). There were the 4 French guys, but we couldn’t understand what they were saying so it was hard for them to be either rude OR smug. In fact, I think they were probably pretty funny, although, we unfortunately had no common language to confirm that. Being the only Canadians I suppose that should have been our department, but I could barely remember the French fragments I learned for Morocco, and kind of dropped the ball, so to speak.

As for accomodations, we shared a 6×6 ft room with another couple, Shawn and Becky, (we had the bottom bunk and two wall hooks, period) with no problems whatsoever, considering the close quarters, and we often didn’t even know when they were above us. Not to mention the Frenchies were just 3ft away across the “hall”. And, strangely, while Nicholas, Jean-Marc, Alain, and Pierre seemed unable to grasp the intricate workings of our nautical crapper (just a hint: you don’t want to leave the bowl overflowing with urine on a violently rocking boat) I swear they only used the head maybe once a day each, unfortunately for their wetsuits, I presume. As for night noise, Laynni loudly proclaimed to anyone that would listen her amazement that there were no snorers to contend with. It was only a matter of time (each time), however, before her persistent belief in this fact forced at least one member of the conversation to eventually confess that they did, in fact, snore, lowering their head in shame at bursting Laynni’s shortsighted bubble (after all, none of the 4 people in our room snored, so the whole boat must be snore-free, right?).

– The End of the World bar on Bimini; 10 ft by 10ft of sand floor, conch fritters and Kalik-fueled energy

– accidentally setting personal records for depth (41m, 133ft) thanks to the downcurrent pushing us down the wall at “The Nodules” while we gawked at a shark and gigantic grouper (?) in the distance

– Whale Point beach, 1 of the 2.5 hours of windless sun we experienced in the Bahamas

– Bull Run, where the shark feed was disappointingly murky, but was redeemed by clear views and close proximity to half a dozen huge, graceful reef sharks a few metres higher once the “food” was gone

– being the first Blackbeard’s cruise to complete the 80+ mile crossing from the Berry Islands to Bimini entirely by sail (according to Captain Mike – alterego: Drunken Jimmy Boofay)

– Brendan, San Diego chef and teddy bear enthusiast, for his welcome north-of-the-border sense of humour, and for sacrificing both time and sanity as Laynni’s babysitter

– the rather confusing love quadrangle, denied by those involved, entertaining for those not

So, until the next time we decide to make vacation seem like work, ta. 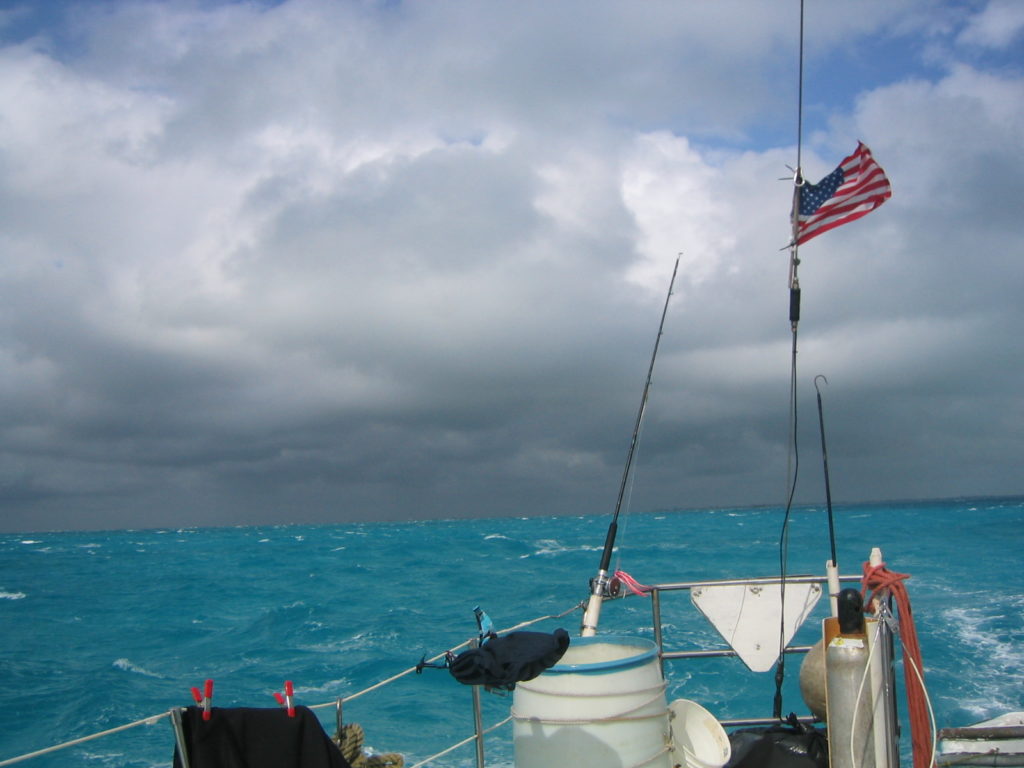 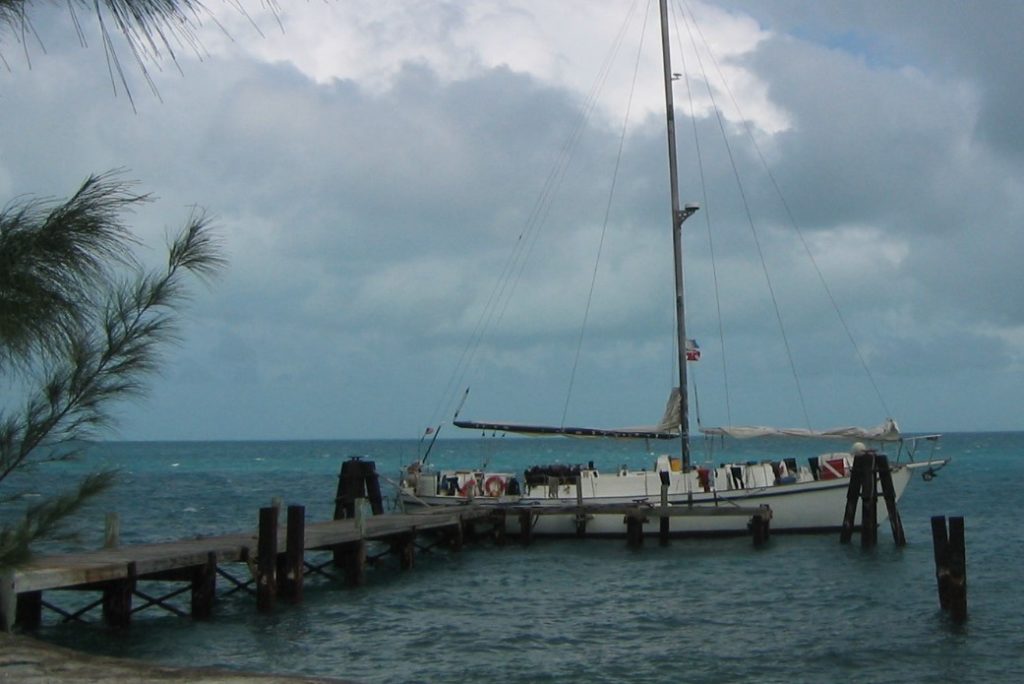 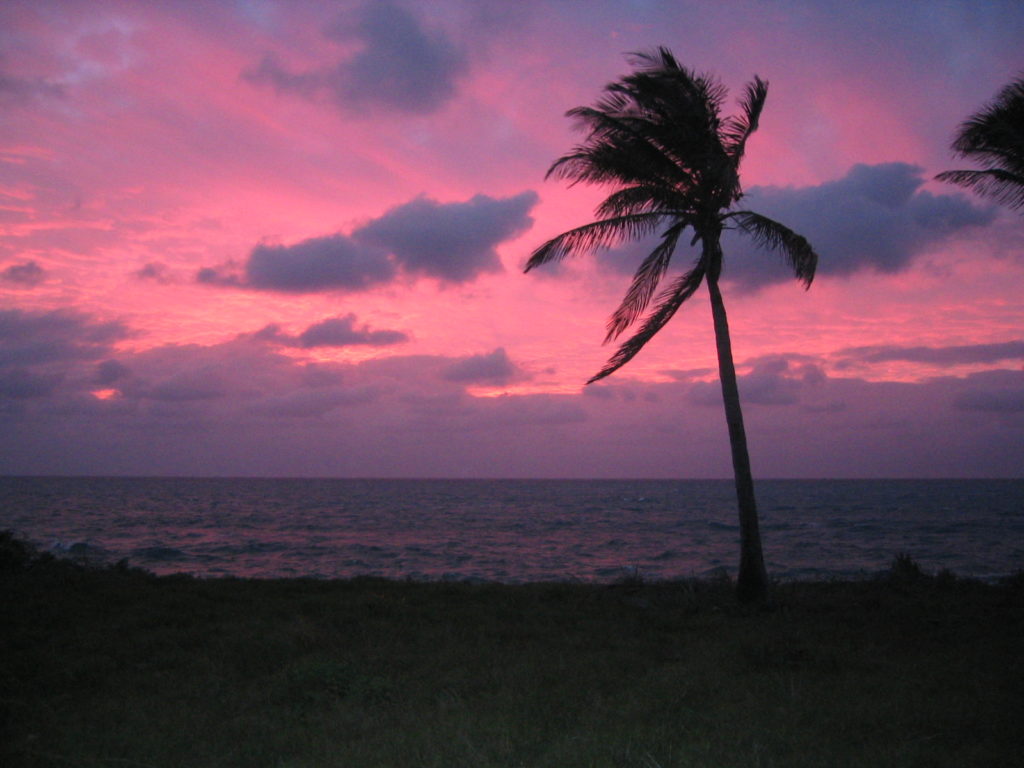 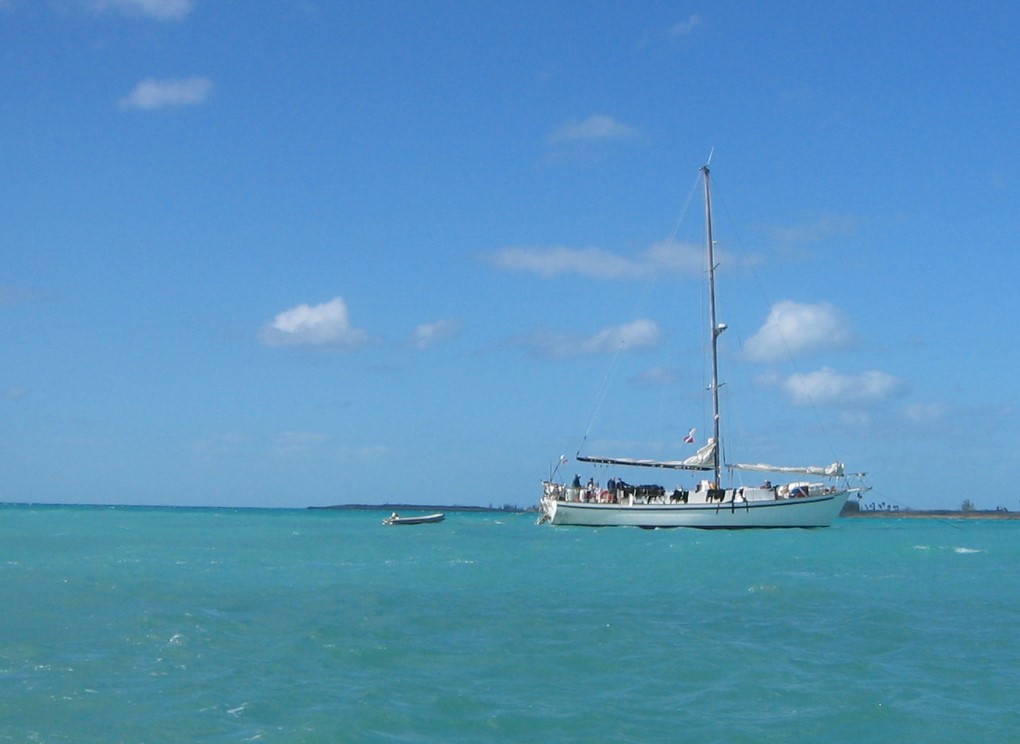 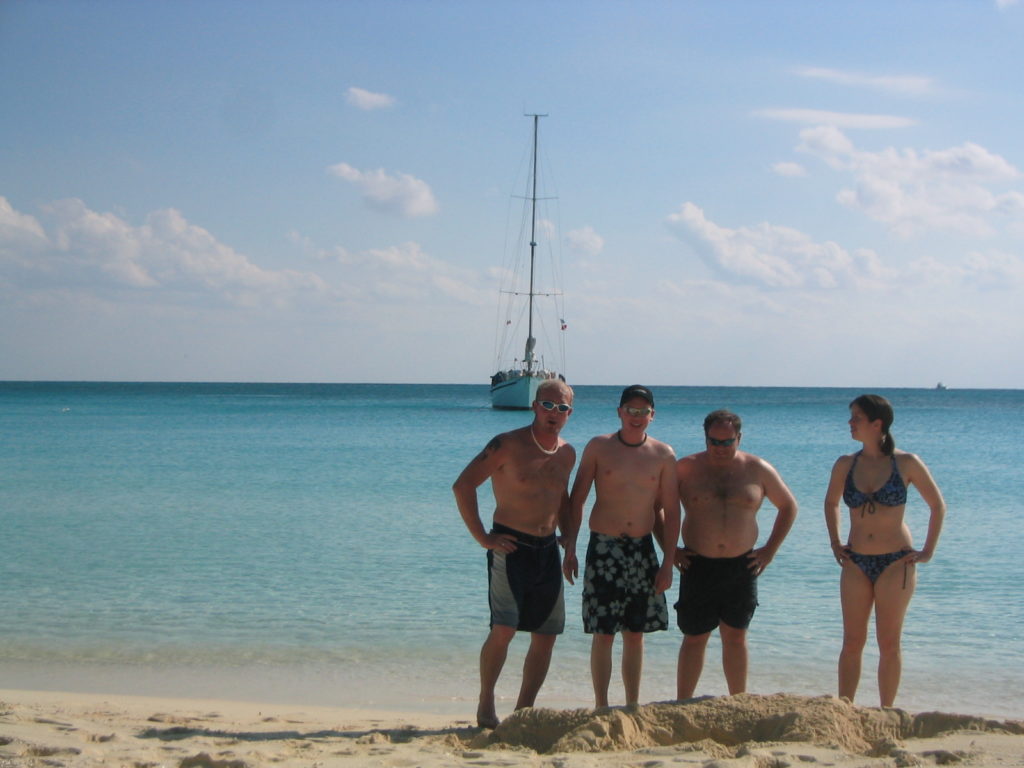 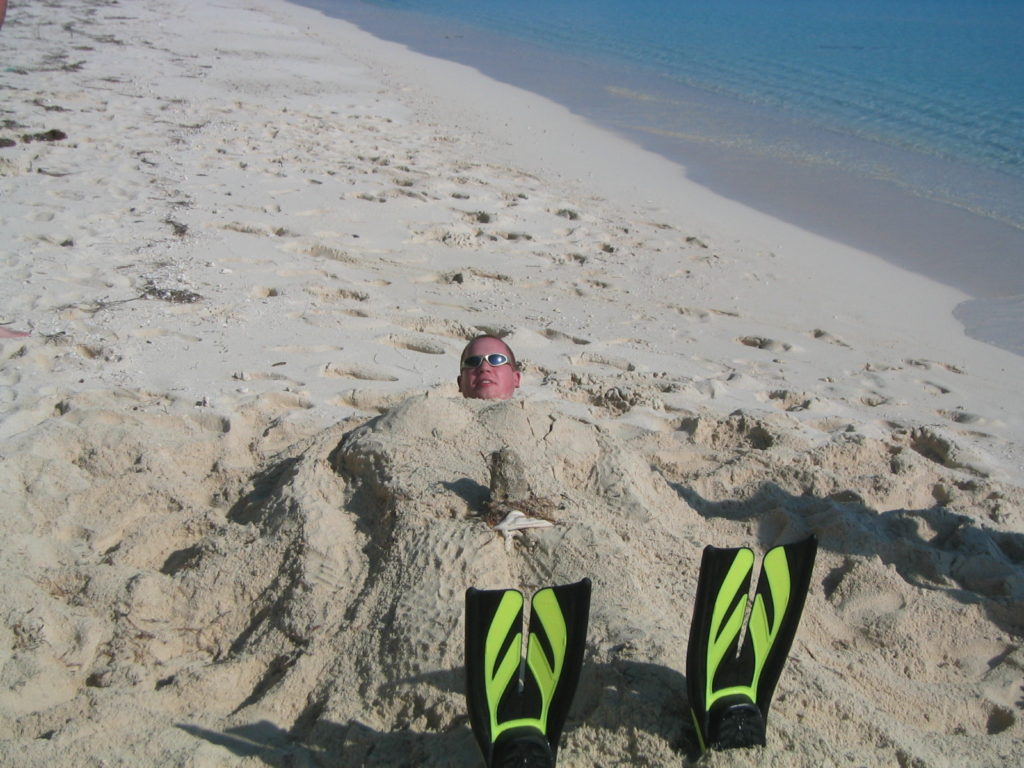 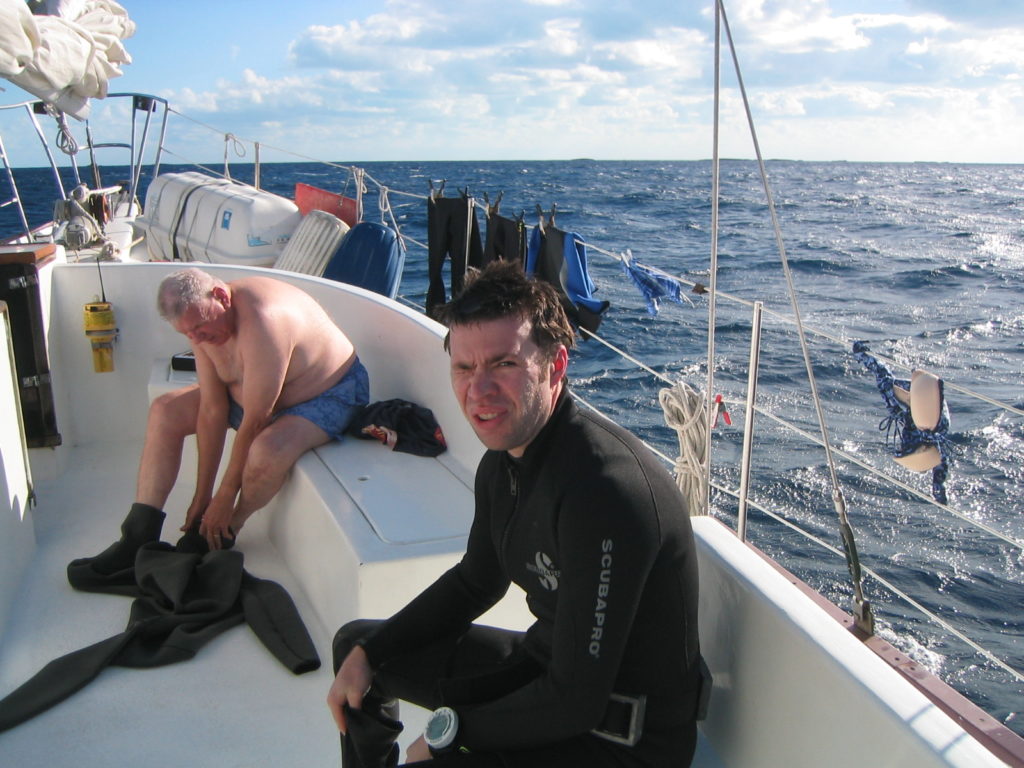 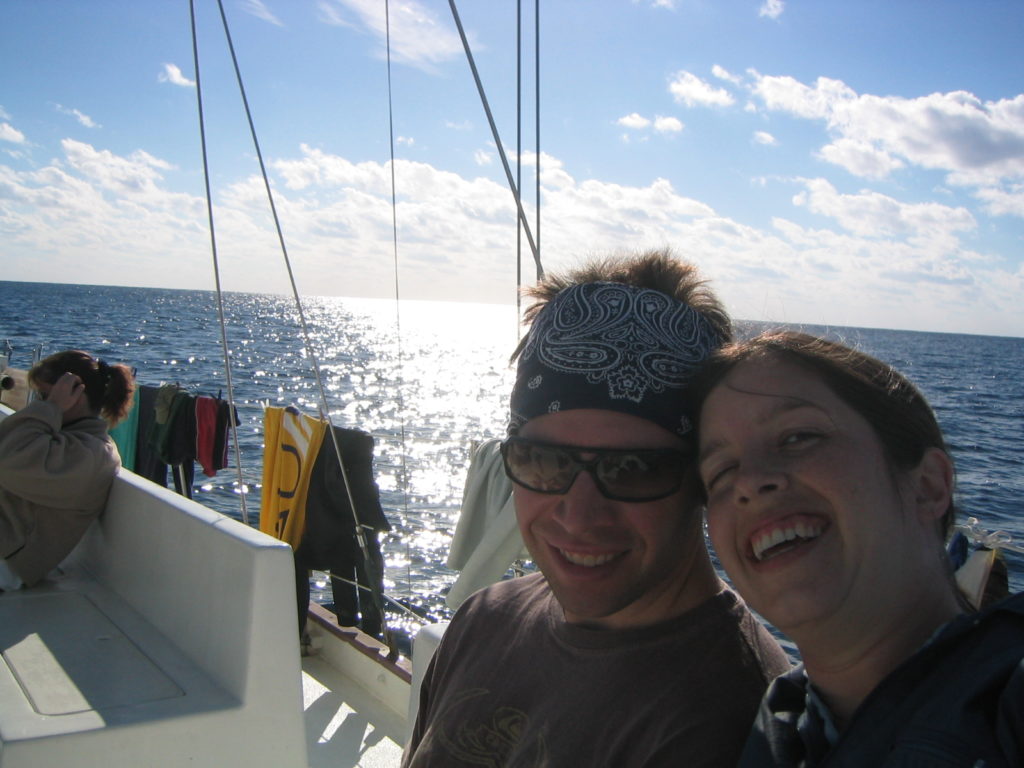 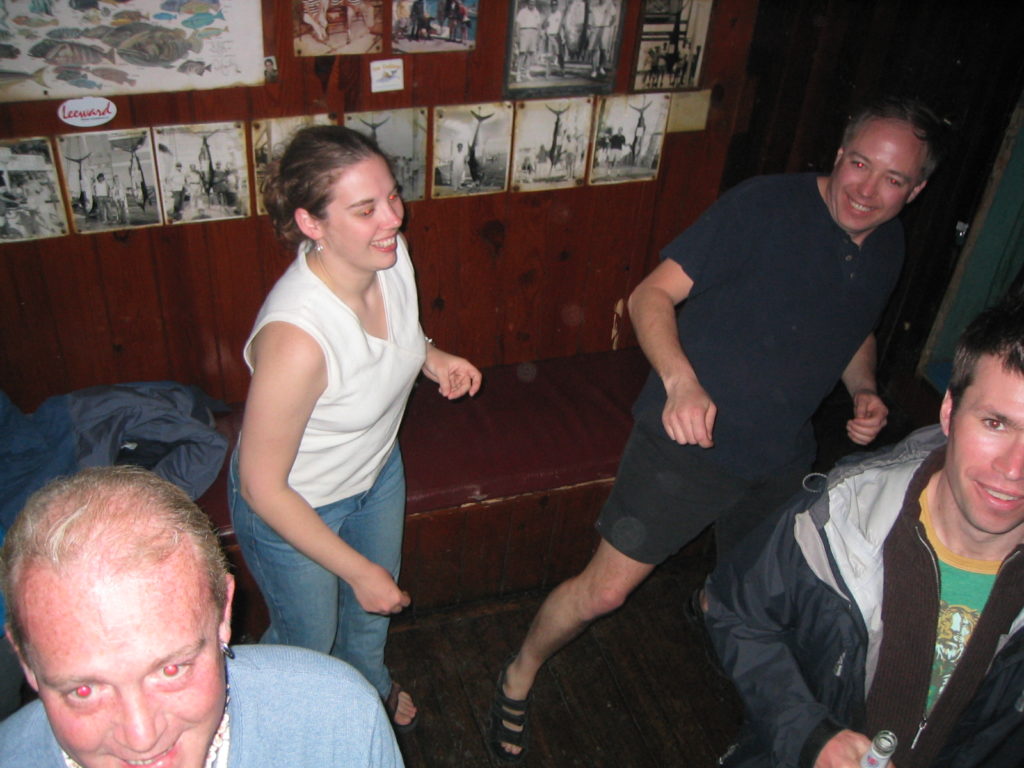 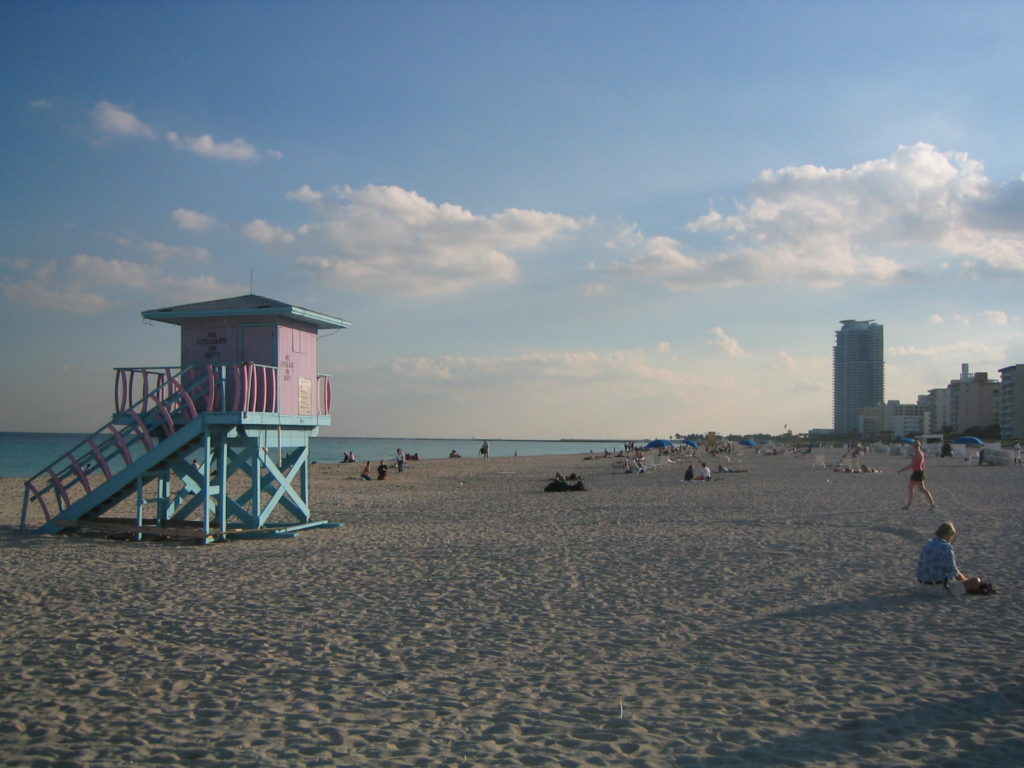 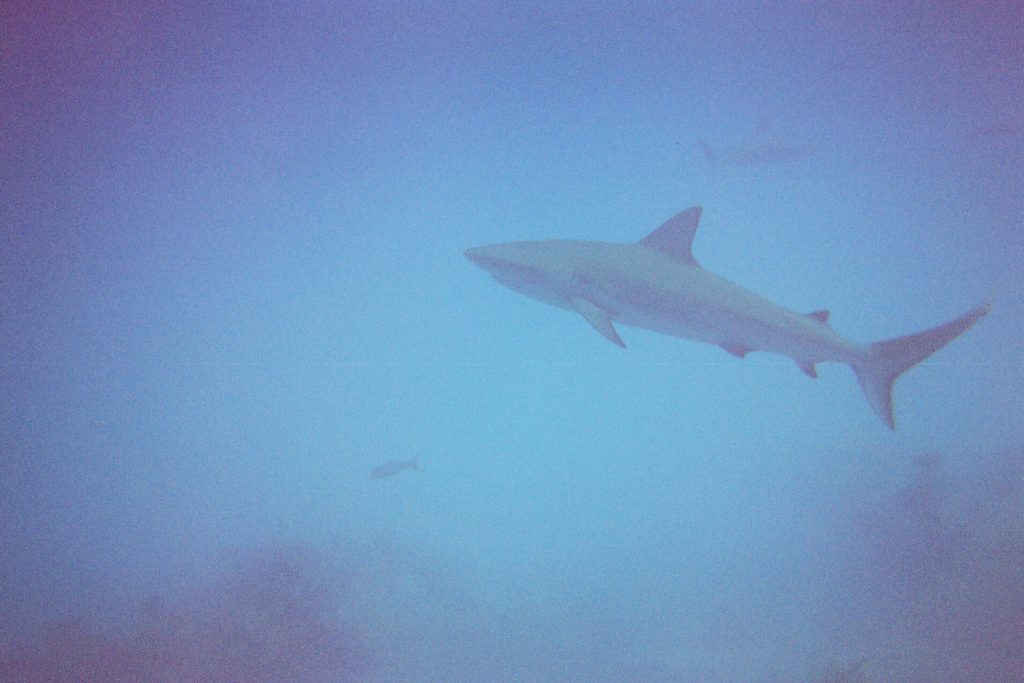