Here we are, finally back in Canada after our 3 1/2 month excursion through the Middle East. Being home has been a blast so far, which is why this blog is so late. I’ve been spending most of my time getting drunk and golfing, not necessarily in that order. Yeah, that’s one thing I really like about traveling – it makes you truly appreciate a lot of the things we have at home that we tend to take for granted. Like flushing our toilet paper. Or speaking English.

One of the only downsides has been the jet lag which has been keeping me from sleeping in so far. Either jet lag or my body reacting to boiled egg withdrawal. Laynni, not surprisingly, has been in PA most of the time already which has been weird in itself after enjoying each other’s so-called company 24 hours a day for roughly 100 out of 105 days. There were meals where we’d sit there just looking at each other, literally unable to think of a single new thing to say. Anyhow, nobody’s reading this to find out how boring we are, or how many downloaded episodes of The Office I plan to watch today so I’ll get back to the trip.

After Cappadocia we went straight on to Istanbul for our last few days in Turkey. Since Laynni had already been there once with her parents she sent me to see a couple of the main sights on my own – the Aya Sofya and the Blue Mosque. That’s right, little miss grew-up-in-a-church left me to tour two of the world’s most impressive religious buildings all by myself. The same guy who once asked if David and Jesus were related. Anyway, these monuments are incredibly impressive and extravagant. I couldn’t help but wonder, though, as I stared at one of about a hundred intricately carved doorways that probably took several masons months to complete, that while all this was actually going on it was more likely the public considered this some kind of “cathedral-gate” than an important historical achievement. Just how popular could these projects have been while Justinian was busy claiming that “in these difficult times we all have to tighten our wee skirts” while raising the price of mule parking and laying off a whole crew of the guys who add the nipples to the centurion’s chest armour.

Moving on, Istanbul was a very cool city, different bodies of water in every direction, old areas, new areas, lots of fantastic architecture and smelly sea-fronts. Spent some time wandering Sultanahmet, Ortakoy and the old Jewish and Greek quarters, as well as on the cheap Bosphorus and Golden Horn ferries. Some of you probably just spit beer out of your nose at “Golden Horn ferries” but hey, that’s really what they are. And grow up. Enjoyed the ridiculous splendour of Topkapi Palace with every 8 year old kid in Istanbul except for the one offering to shine my sandals. Which reminds me, got completely played by a shoe shine guy while waiting for a ferry in Balat. He “accidentally” dropped his brush as he was walking past, then after I picked it up and called him back he gushed his appreciation , smoothly tying in how he wasn’t all that surprised at our selfless generosity, being that we were Canadian and all. And please, I insist, let me just give you a quick touch up. Next thing you know my ratty old hybrid hiker/street shoes were being buffed into some semblance of shininess. Perfect. And while I already assumed I would give the guy something for his trouble, the full depth of the con only hit me when the conversation turned to the cost of health care for the son he was about to go visit in the hospital. In Canada hospitals are free, yes? Oh, not here, so expensive here, no chance for a poor shoe-shiner to take care of his family. Then it all fell into place, him not noticing the brush clattering on the sidewalk, the effusive handshakes, the appeals to our natural tendency to want to feel charitable. All I can say is well played my friend. I must have turned down around 50 shoe shines over the past 3 months and then – boom – just like that I find myself leaned back on a park bench with my feet in the air. Yeah, you know what I’m talking about.

We were also in Istanbul for the start of Euro 2008, a major soccer event that probably falls just below the World Cup in importance in this part of the world. The whole city was buzzing for the Turkish opener against Portugal, with every bar in town setting up as many TVs and chairs as possible. I ended up sitting with a couple Turkish guys during the game, at least until Portugal scored and my overly objective analysis (“boy, that was unlucky, I don’t think he was even trying to kick it there”) drew some sidelong stinkeye and they mysteriously found their way to a more sympathetic table where their scowling faces and violent smoking were more the norm. Unfortunately we were already back in Canada before Turkey came up with one of the more miraculous comebacks of all time, scoring 3 times in the last 15 minutes against the Czech Republic to win 3-2 and move on to the quarter-finals.

Paris: the setting for more books, movies and cliches than you can shake a loaf of french bread at. And yet, despite all we had heard and seen, Paris managed to completely blow us away. A truly beautiful city, not so much because of the insanely popular main sites (the Louvre, Eiffel Tower, Arc de Triomphe, Notre Dame) but more just from its overall charm and setting. So many nice streets, buildings, neighbourhoods, bridges, an excellent metro system and a great city for walking. The streets were wide, the drivers cautious and law-abiding (especially in comparison to the Middle East), the little animated pedestrian walk-lights delightfully energetic. And we both agreed that the people in Paris are the most attractive, on average, that we’ve ever come across. Hard to say if that is actually a physical thing or just because so many seem to dress well, but in the end the effect is the same. As for the other French stereotypes – nobody was really rude to us, and we didn’t notice any particular examples of cowardice, although I wasn’t really putting on my mean face that much. We didn’t actually like the food but since we, especially me, tend to like our food simple (i.e. bland) and straightforward (meaning listed in English) that was probably more due to us than them. And we also don’t drink wine, unlike every other person we saw who obviously saw nothing strange about sitting down for lunch with a whole bottle to themselves.

Even all the tourists weren’t a big deal outside the obvious places (you mean we weren’t the first to think of going up the Eiffel Tower at sunset?), and in most areas you could just go a block or two off the beaten path and be almost completely alone. It was like there was an invisible wall around all the main attractions that gave you an electric shock if you tried to pass through wearing socks in your sandals and your money belt hanging outside your t-shirt.

So to recap – we liked it. Plus, I’m pretty sure we saw Martina Navratilova jogging on the Promenade des Plantees. Can’t say for sure, but the French Open had just ended…. Anyway, she may not be the prettiest bird in the cage, but it’s still very cool to see a living legend of tennis. And although I could be mistaken, I’m pretty sure she invented lesbianism. 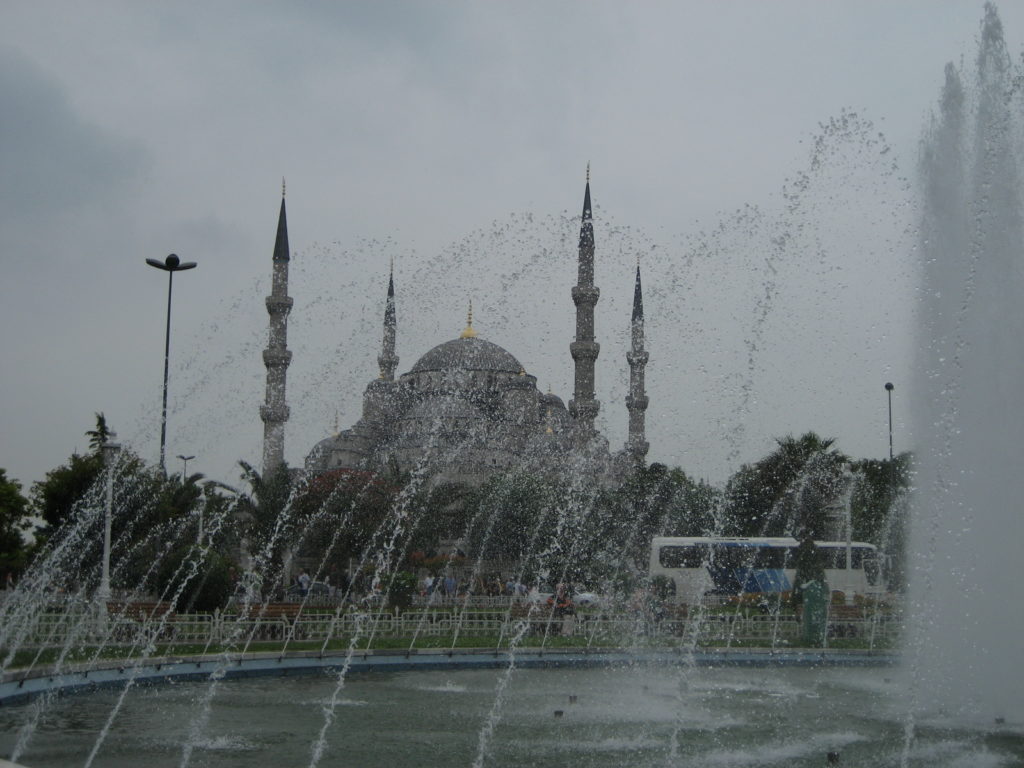 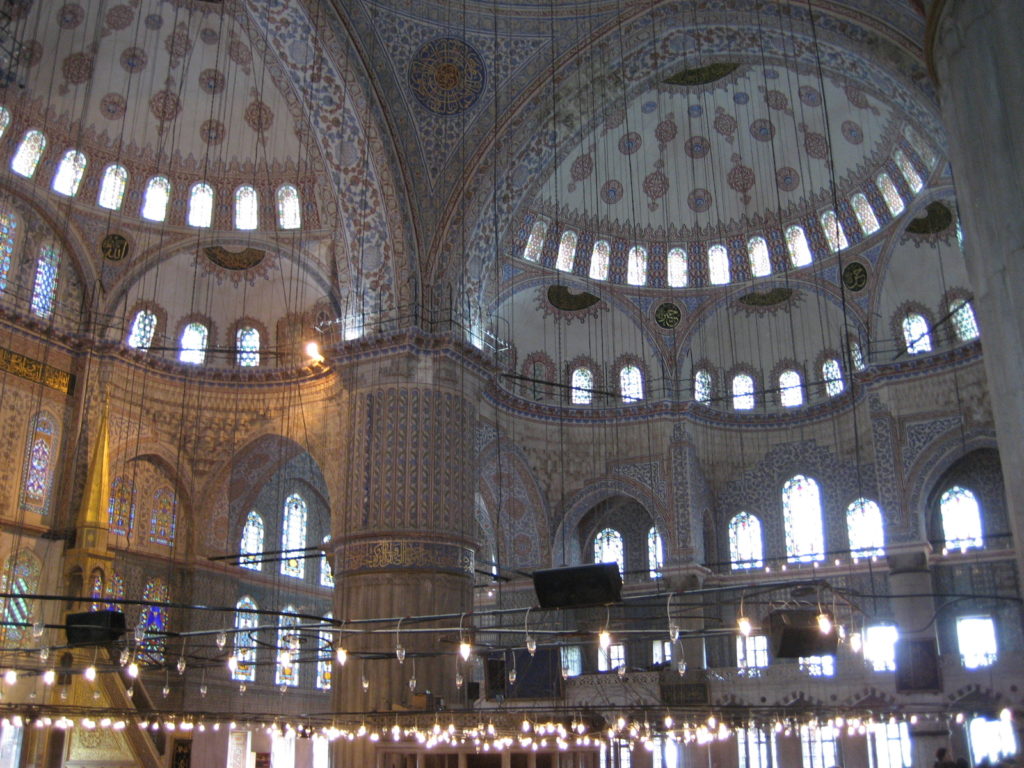 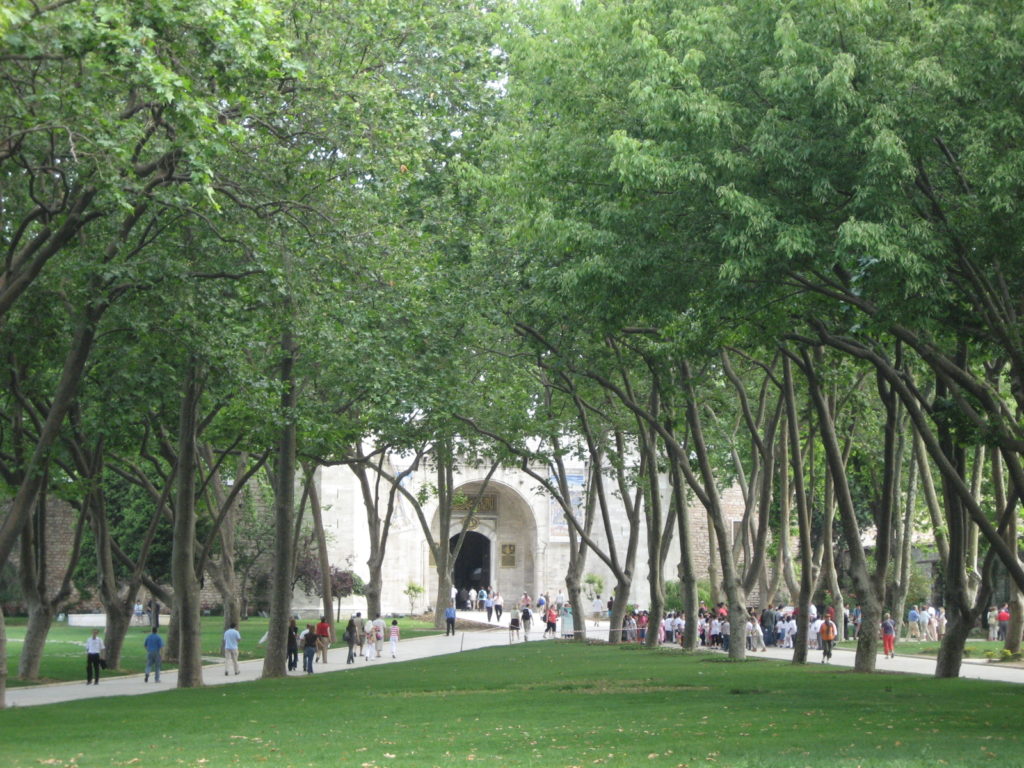 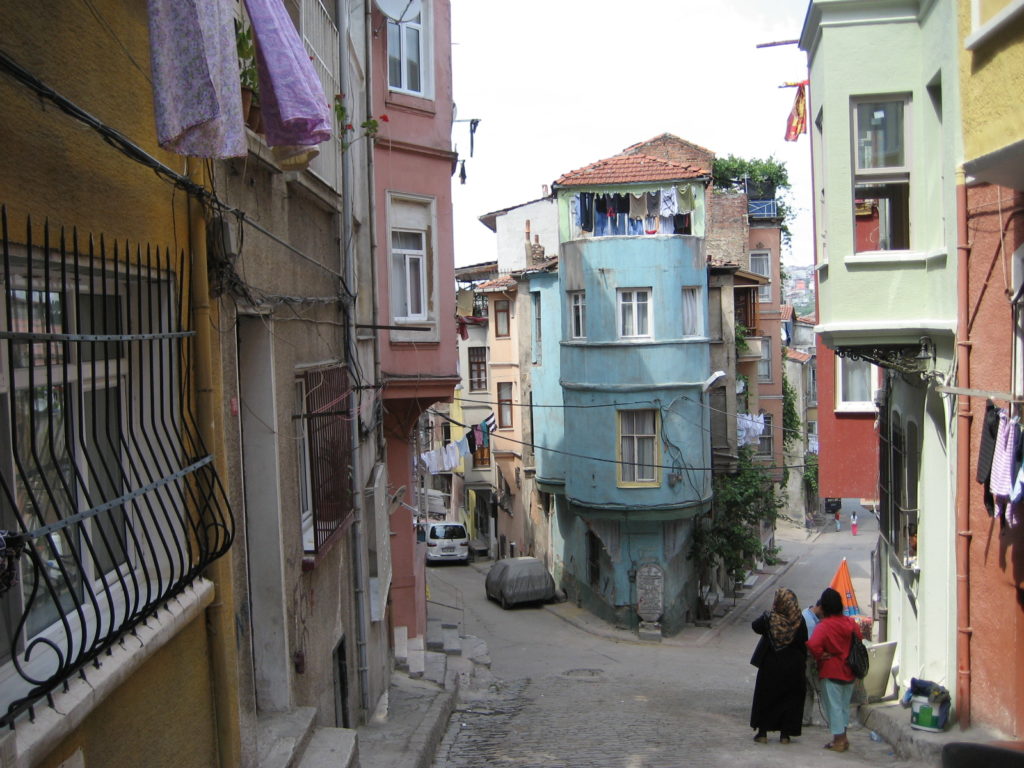 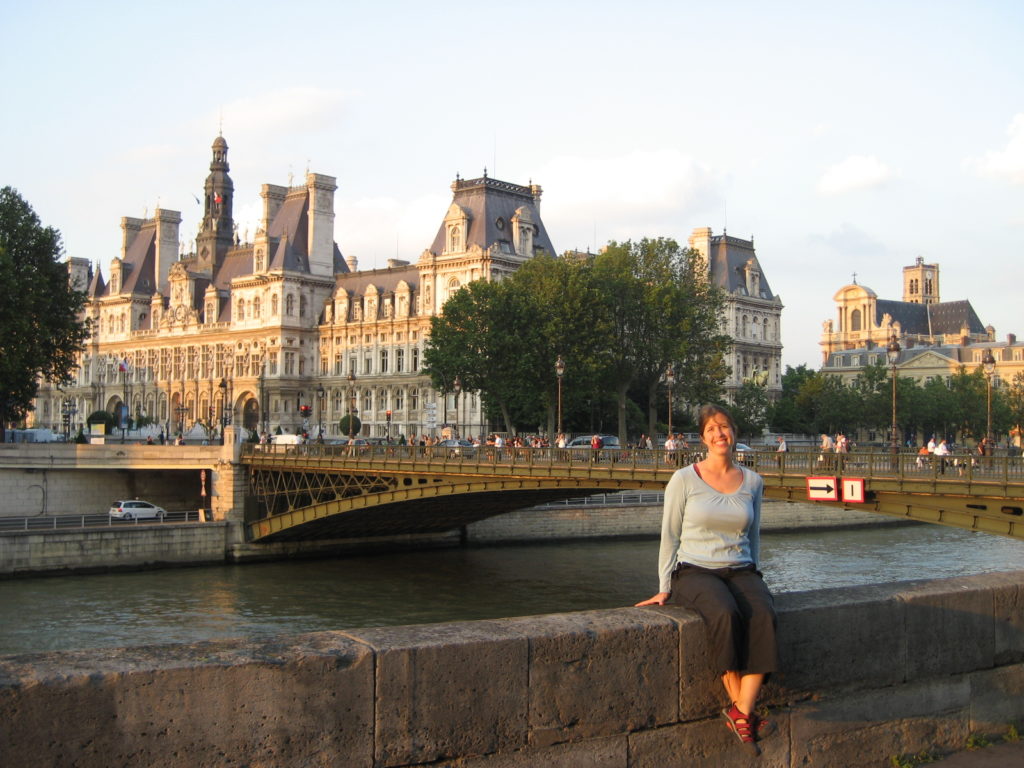 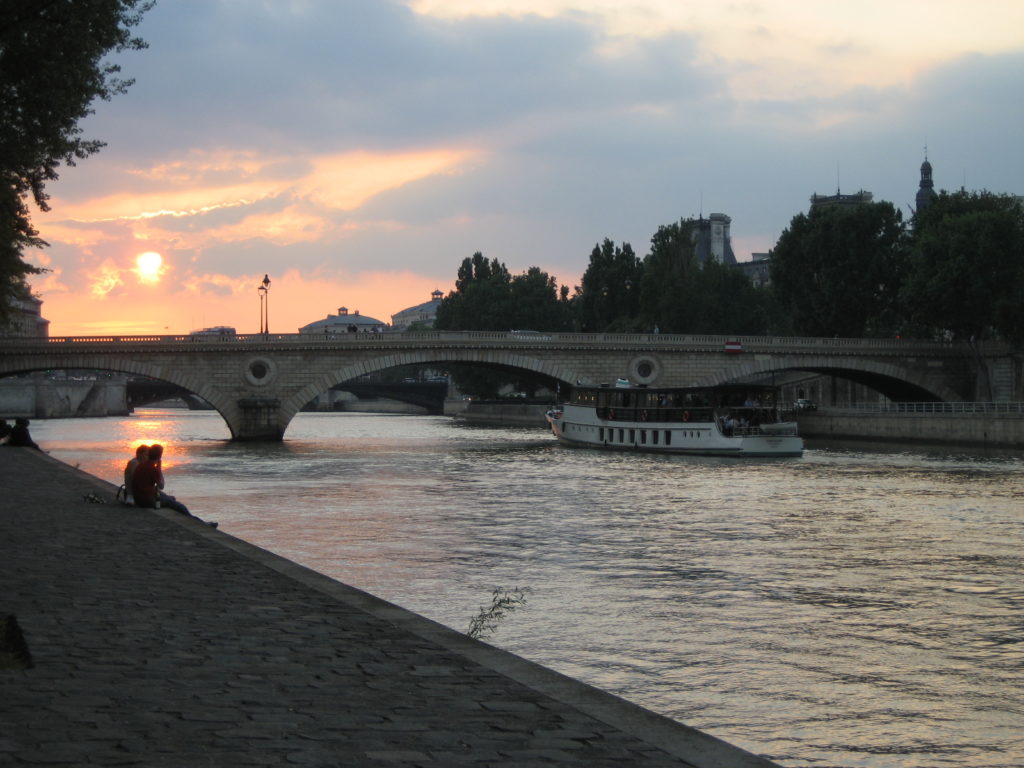 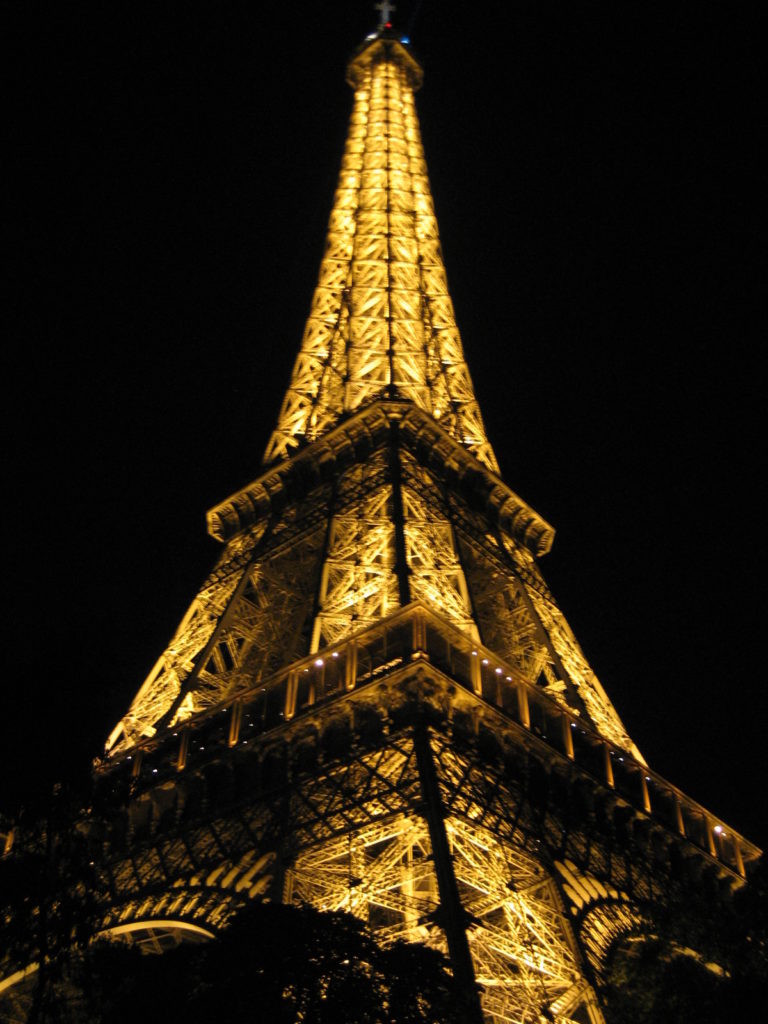 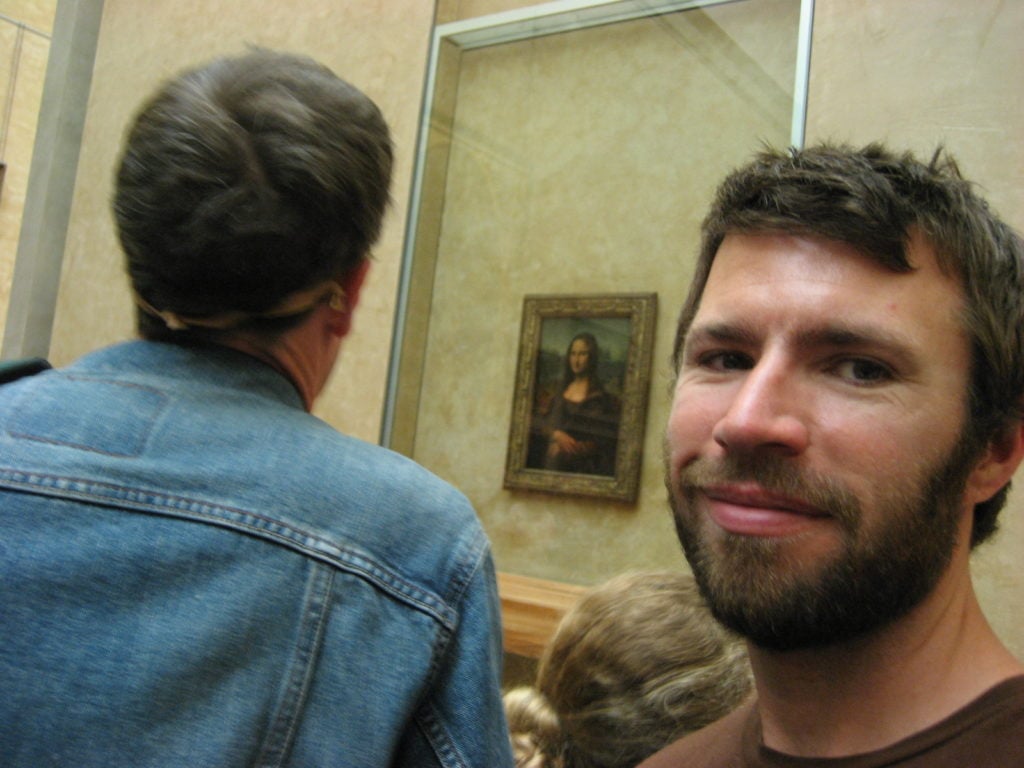