A 2.9 From the Russian Judge

Welcome aboard the Miriam-Sophie Blue Cruise where you’ll enjoy 4 days and 3 nights of exotic splendour. You’ll cruise the beautiful Mediterranean coast, swim in the calm blue waters and laze around like a degenerate bum. Don’t forget your unearned sense of privilege. Our much anticipated “Blue Cruise” got off to a somewhat questionable start, with the “gulet” arriving in port late, eventually backing our departure time up by about 3 – 4 hours. On the plus side, it gave us a chance to mill around and get to know the seven other people we were about to share very close quarters with for the next four days. Coincidentally, all eleven of us were either directly or indirectly from Canada or the U.S., although one couple now lives in Costa Rica. There’s always a certain amount of uneasiness that comes with deciding to spend every waking moment with a group of complete strangers – how do you know what to expect? Would they be loud? Foolish? Uptight? What if they snored? Or had bowel issues? Made fun of our bowel issues? Or had red hair? What if they weren’t willing to give me pity laughs? Or were from Quebec? Sadly, several of these fears came to pass, yet somehow we still all came together like one big happy family. 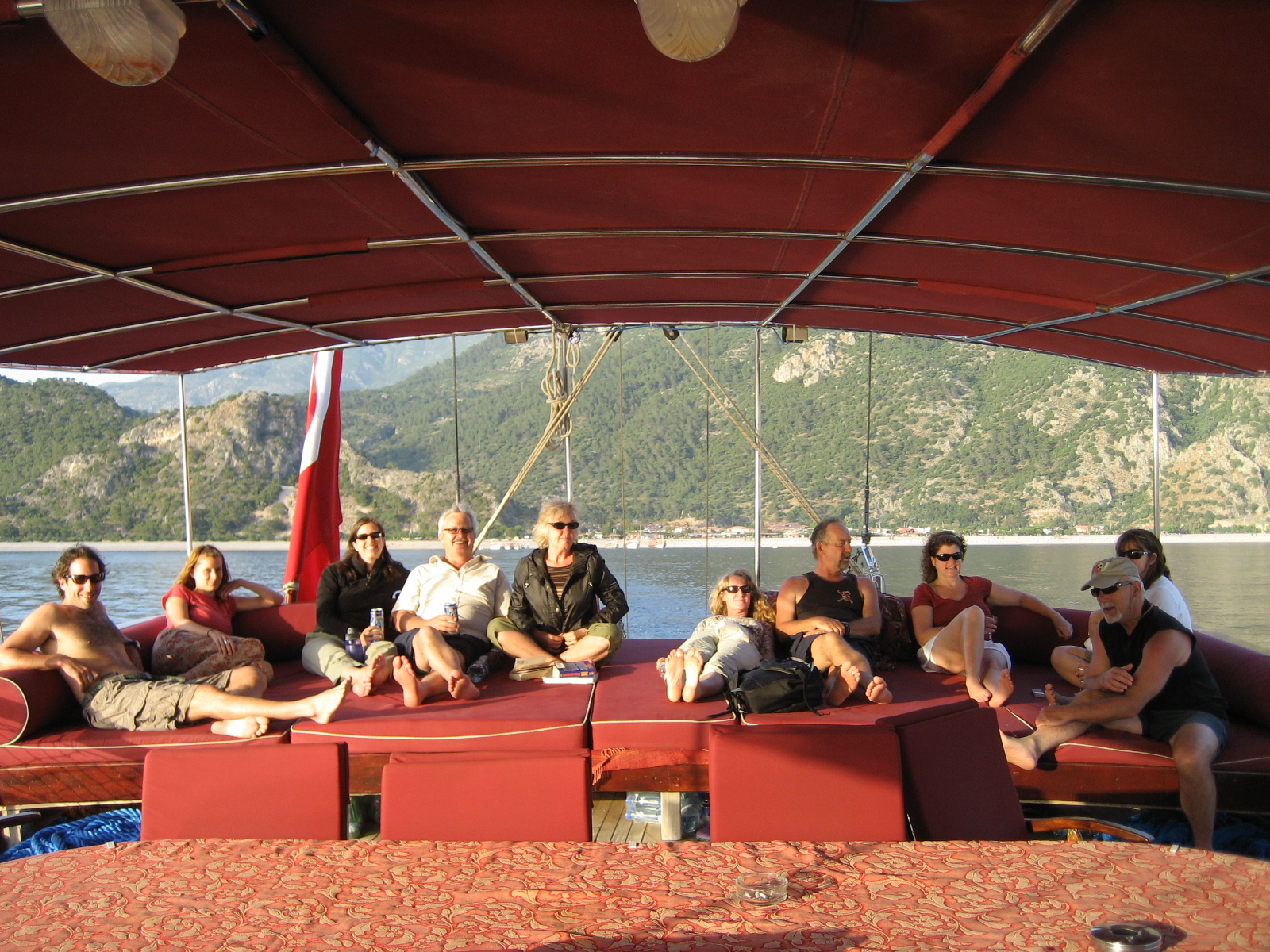 Our boat was also manned by an efficient crew of five who we didn’t really get to know too well. They mostly kept to themselves except, of course, during the hour immediately following breakfast when the two girls managed to spread a wide swath of both surprise and awkwardness. As you would expect, this was the time when most people returned to their cabins to change, brush their teeth, put on sunscreen, and, of course, take care of any other private bathroom issues brought on by hot tea, mounds of bread and a boiled egg. Strangely, this was also when the crew felt the need to clean our cabins. Not necessarily a big deal if not for their unnerving ability to act as though we literally did not exist. First off, they always shut the door while in our room, not really standard practice in housekeeping, but it did provide the excitement of unexpectedly banging the door into an angry woman with a toilet brush, which generally did a good job of scaring the hell out of me, for one. Undeterred, however, they would usually force a smile before continuing on, pointedly ignoring us as though we were some foul ordour expected to pass by soon. We would then quickly grab whatever ws absolutely essential and skulk out, for some reason feeling bad for having so rudely entered our own room. And it was worse if we happened to get there first since they felt no need to knock but would simply walk in and start doing their thing for all the world as though we were simply part of the furniture. Jean-Francois, one half of our boat’s French Canadian contingent, said they actually got him to lift his feet while on the can so they could vacuum under them. I’m still not sure if he was kidding or not. 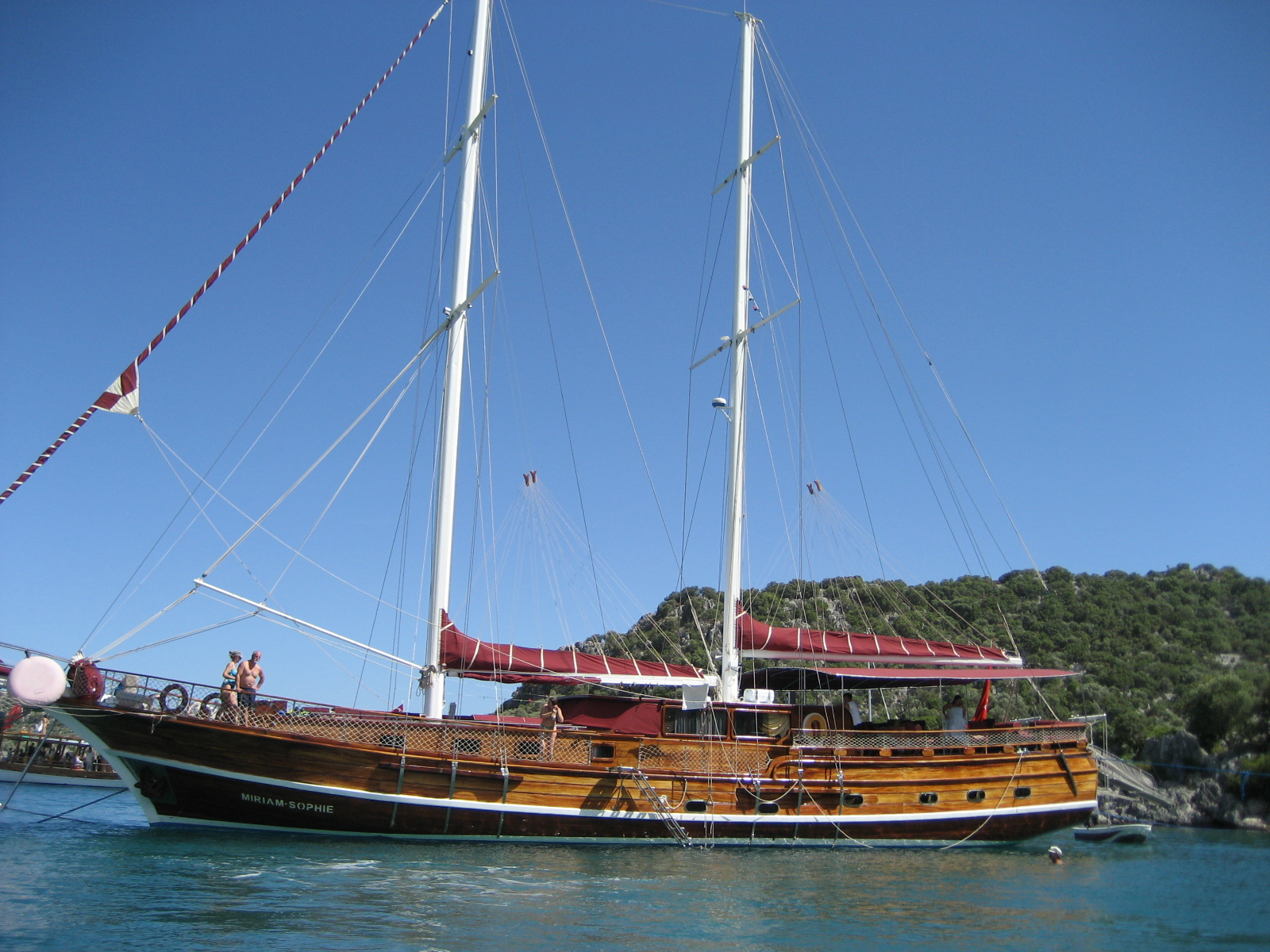 Our captain, on the other hand, was quite friendly and also what you would call a rather large man. If you go to our Flickr site you can enjoy a very flattering photo of him and I together where it appears he’s thinking about putting me in his pocket, maybe to take home for his giant kids to play with, where they would probably dress me up in little knickers and force to make out with pocket-sized Andrew Shue. Probably. 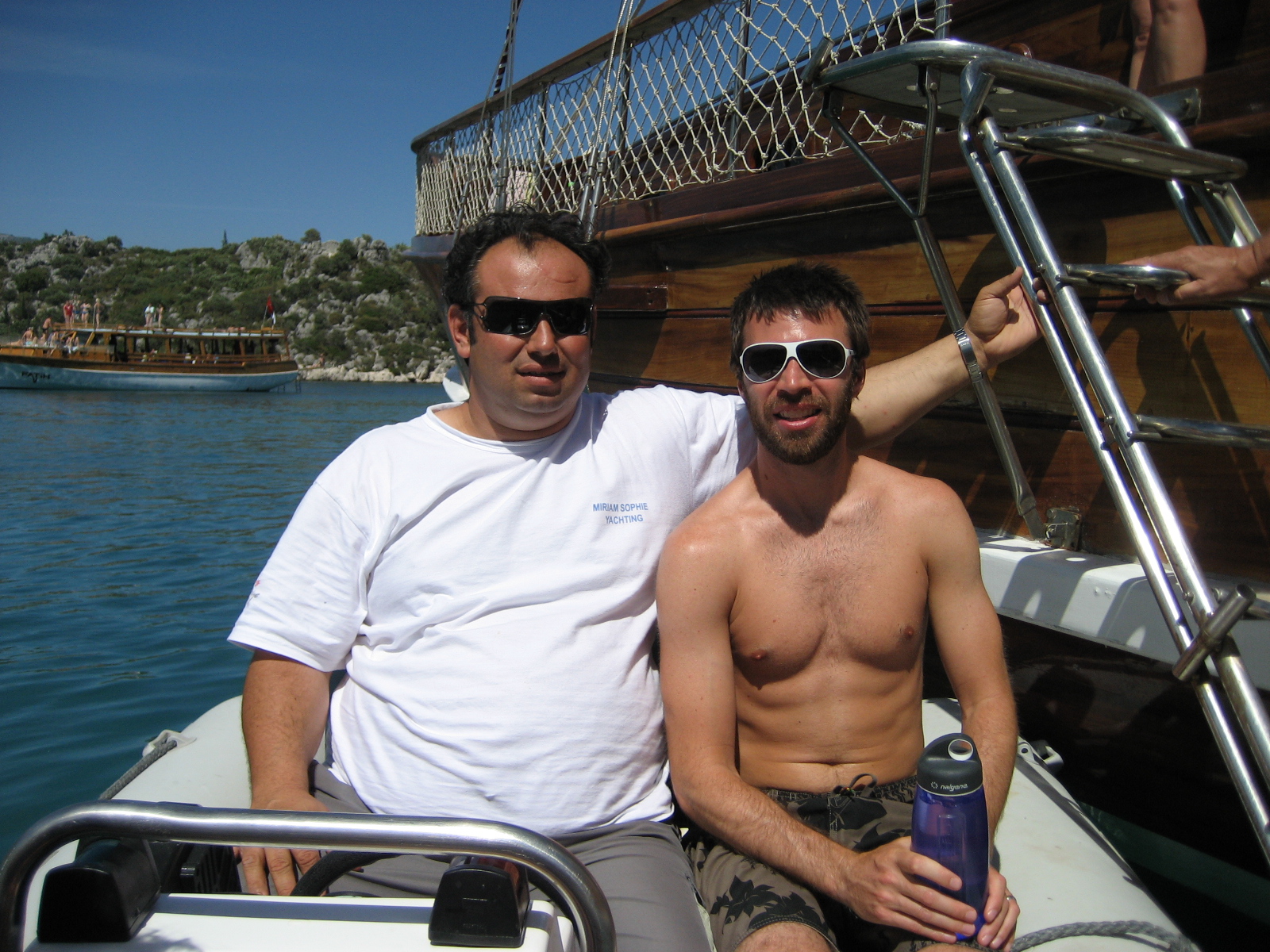 Our first stop was, oddly enough, at Butterfly Valley, a place where we had already spent a couple days while hiking the Lycian Way. This time we swam more and hiked less, in fact, not at all. I saw the ugly side of technology when I emerged from the water onto this beautiful remote beach only to find myself directly in the path of a thin hairy little man in nothing but a speedo stalking up and down the beach having a loud animated conversation into his hands-free cell phone. Is this really what we call progress? 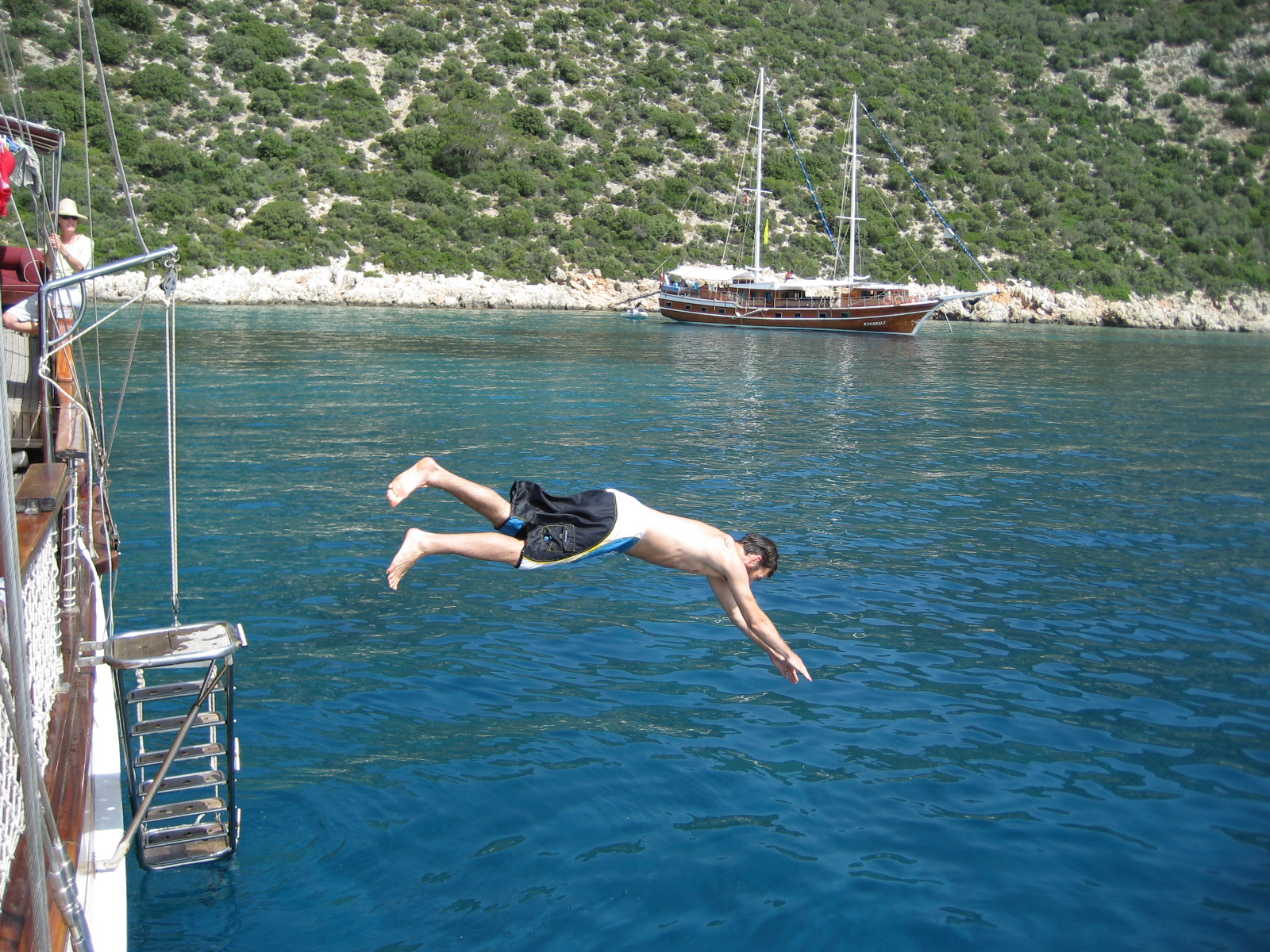 Anyway, some of the other highlights of the trip were the many secluded bays where we stopped to swim and snorkel, the quiet village of Kalekoy with its imposing hilltop castle, and the half an hour it took us to back our monster of a boat into a dock space in Kas, wriggling, shifting and pushing boats out of the way like a fat great aunt taking over the couch at Thanksgiving and turning off the football game to watch Springer. The famous “Sunken City of Kekova” was supposed to be a highlight but since they no longer allow swimming or snorkeling, the deck of our boat is about 3 metres out of the water and the ancient city, well, sunk, there really wasn’t that much to see. Sure, those dark shadows could have been fantastically preserved, historically significant ruins, or they might have been seaweed. Hard to say.

Most of the time our captain, or “Big Daddy”, as he liked me to call him, did and excellent job of keeping us away from the busy areas. However, thanks to some heavier winds on the third afternoon we ended up sharing a sheltered bay with a number of other ships. A couple were gulets like ours but there were also several smaller day-trippers blasting indecipherable music and bursting at the seams with exuberant Russians. You could tell that the vodka was flowing freely as they danced in large groups and took pictures of each other in thongs and numerous sexy poses. Just to be on the safe side Andrew (C.R.) and I used binoculars to keep a vigilant eye on the proceedings (I knew those things would eventually come in handy). After all, it was clearly our duty to guard our ship against a surprise ambush by these scantily-clad vixens, who obviously had mischief on their minds. Or, at the very least, we felt we should provide a detailed pose by pose report.

At one point later on I was climbing the ladder out of the water on to our boat when I was surprised to be followed up by a middle-aged man in, what else, a speedo, with a George Hamilton-esque tan, a mouthful of gold teeth and a helmet of hair magically unaffected by the sea. Luckily all he wanted was to have a picture taken on our boat because for a few seconds my mind was racing, frantically searching for how I may have offended the Russian mafia. Was it my clumsy dive, the complete lack of precious metal in my mouth or my thousands of dollars in Siberian sled-dog racing debts? There was no way of knowing.

On a side note, it only just occurred to me how often I not only notice, but then consequently both think and write about, guys in speedos. And I really don’t think I’m comfortable with the potential implications of that. Ok, now I’m off to reflect, and maybe moan a little. 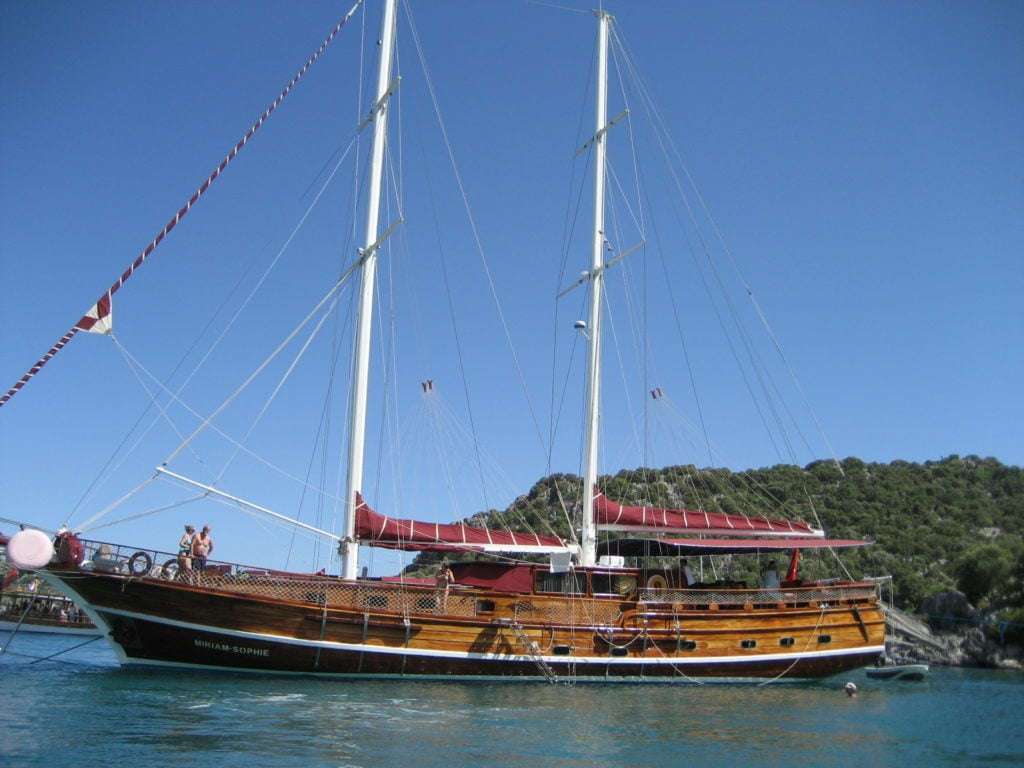 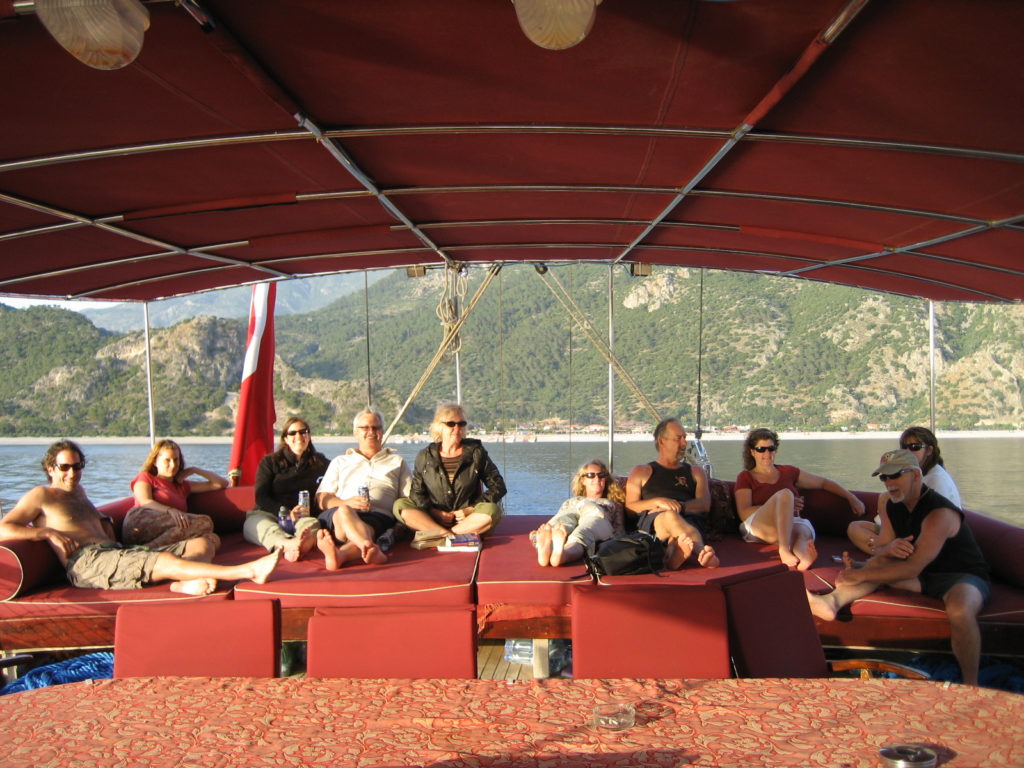 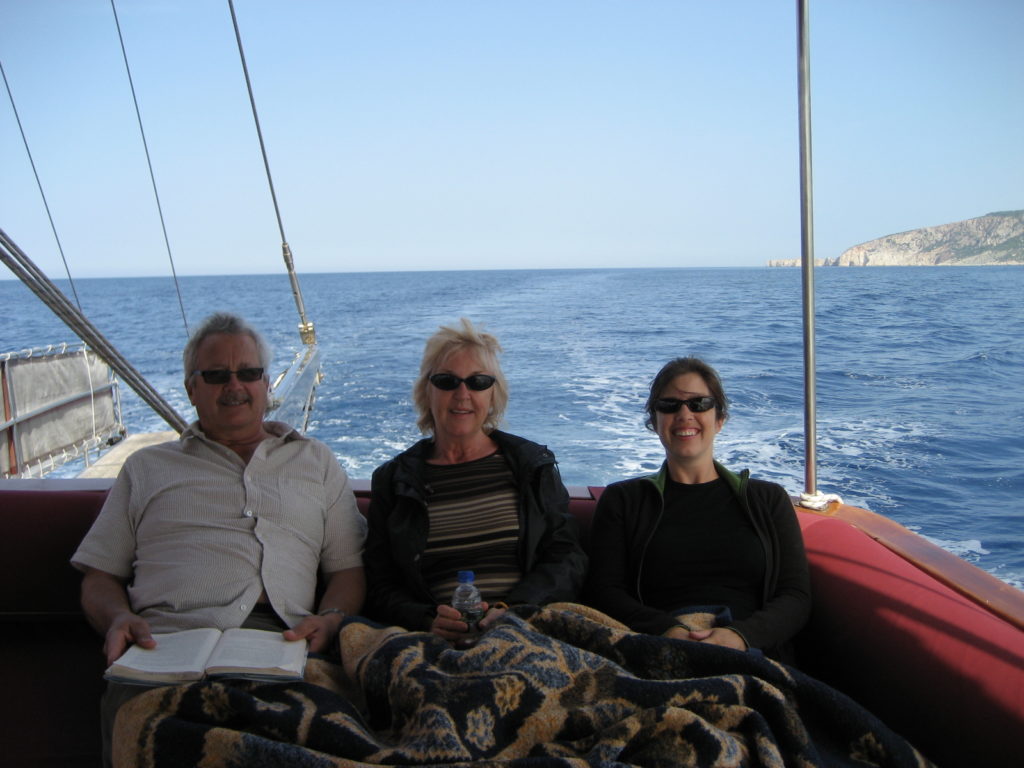 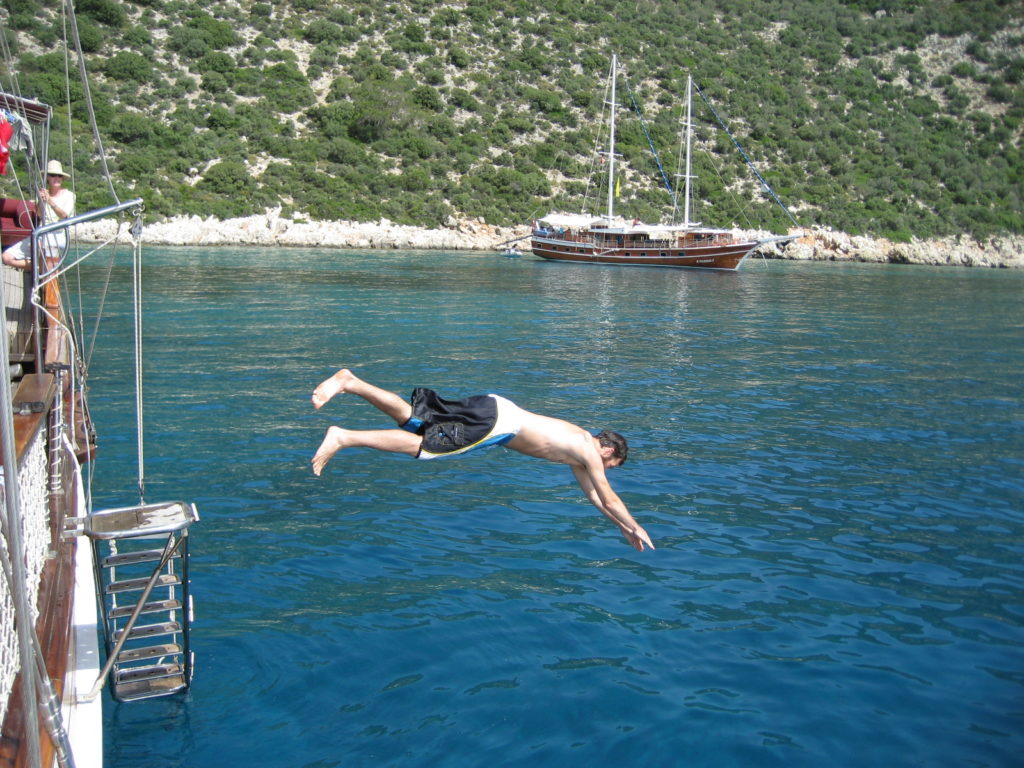 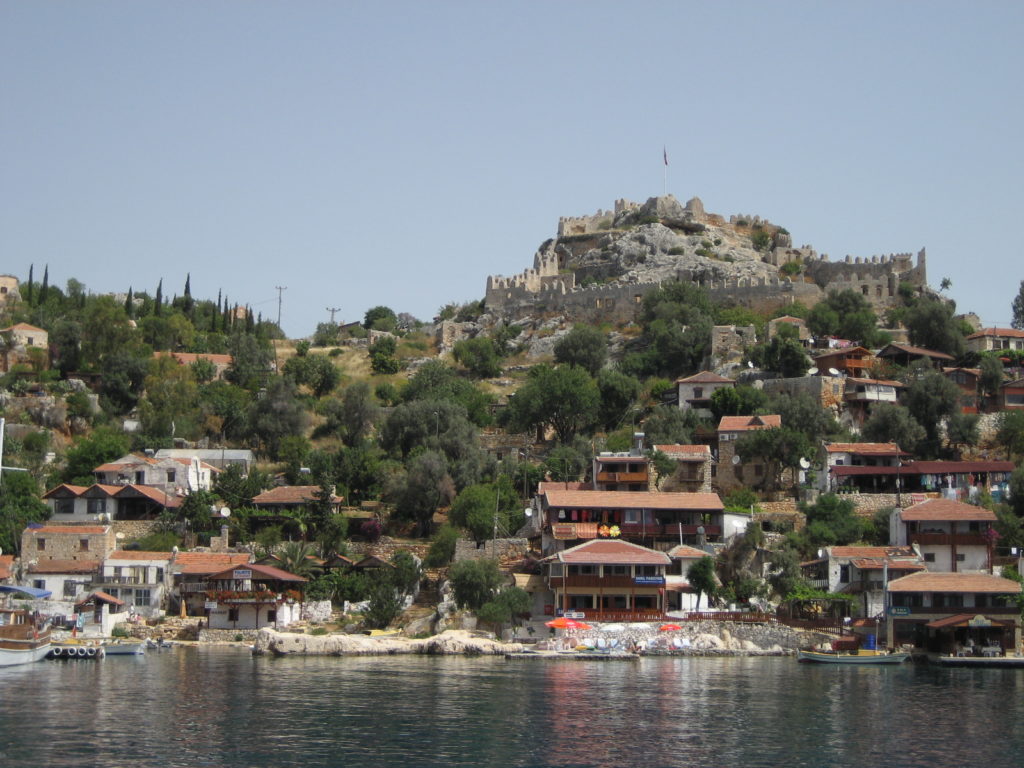 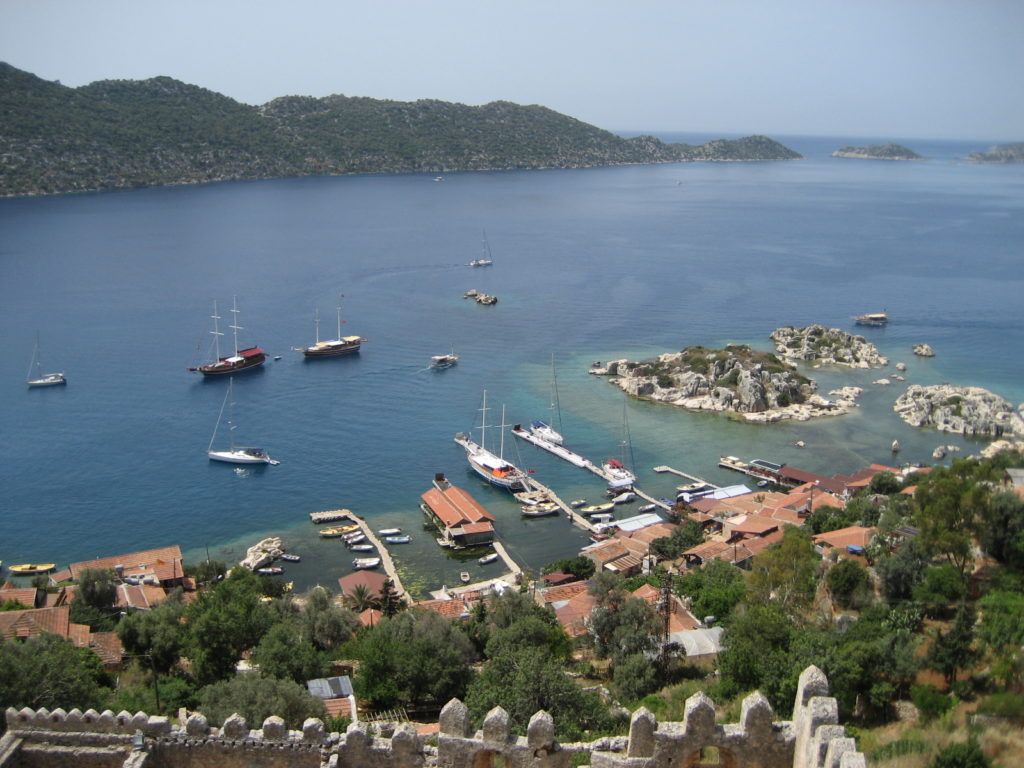 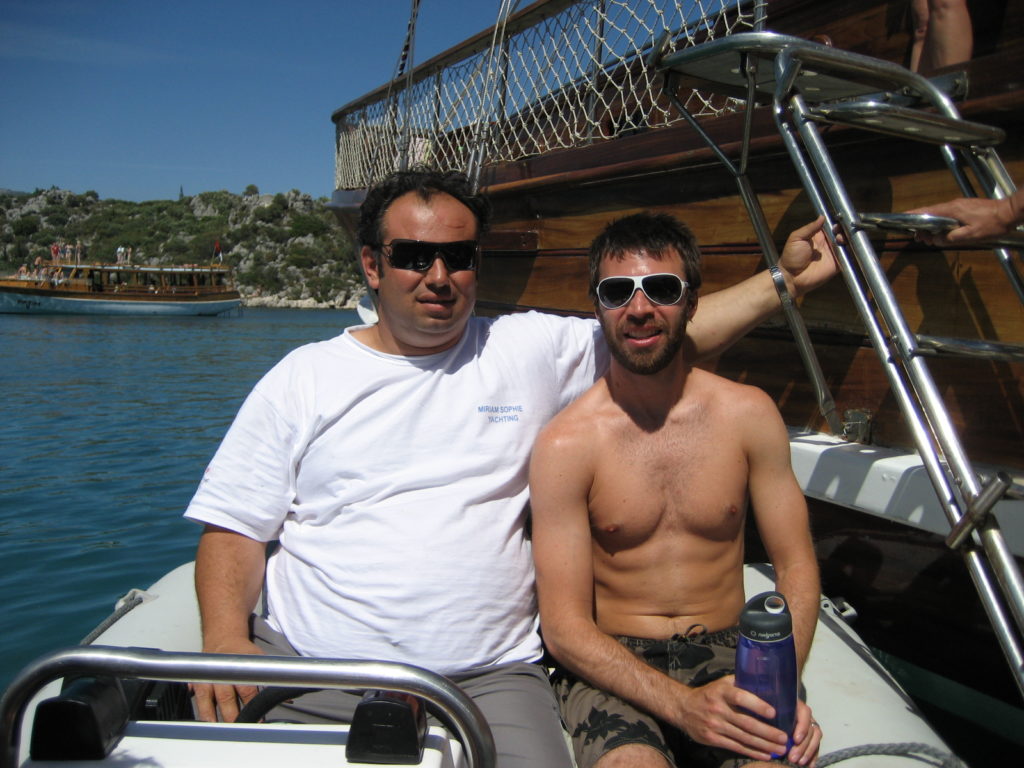 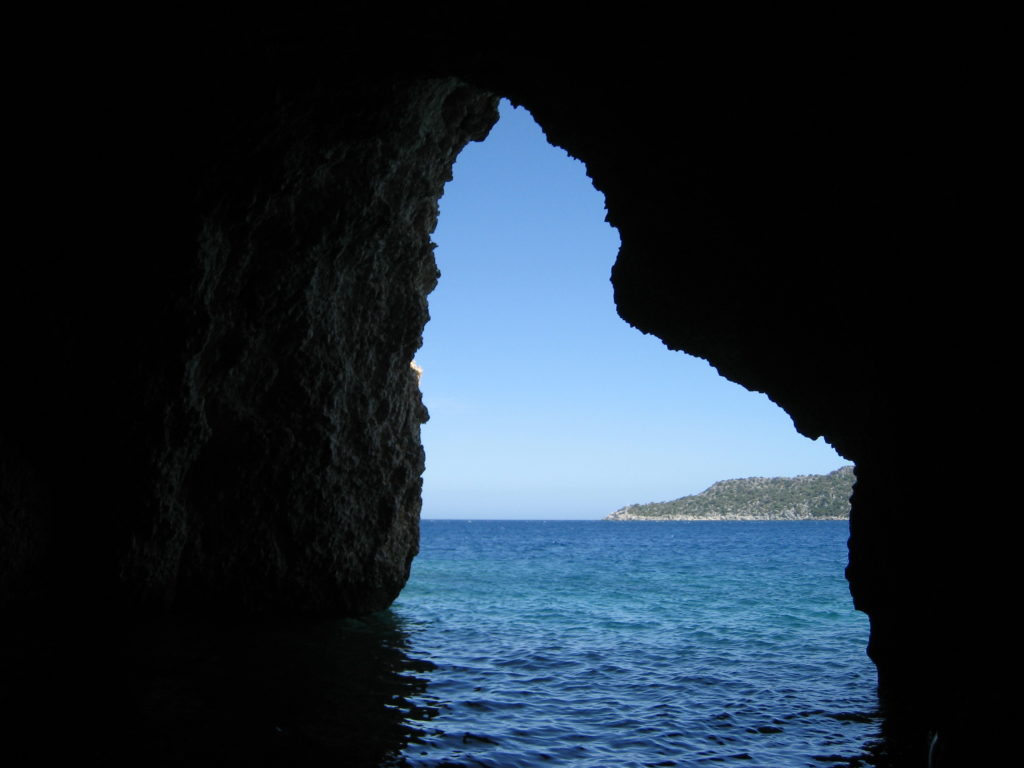