Or does it actually translate to “Land of the Smoke-Belching Ladas”? Sure, it’s easy to bash Cairo because, let’s face it, the place isn’t exactly the definition of a model city. Traffic, people, smog, people, noise, people, etc. etc. But its volume of sights and attractions is also truly incredible. Around practically every corner is a stunning mosque, an ancient monument, a maze-like bazaar, the Egyptian Museum, the Nile, some pyramids…  An interesting few days but that was enough. And I’m not sure our lungs could take much more of that air to be honest.

As for the traffic, well, let’s just be conservative and call it absolute insanity. Cars, bikes, buses and pedestrians race to and fro, jockeying for position, seemingly always just inches from contact. At one point on our way to the Pyramids there were 3 vehicles all within an inch or two of us (literally) while a pedestrian had his hand on the hood. And we were still moving. Not long after that we actually smoked some little kid with our mirror. Fair play, young lad! Lanes, lights, parked cars, rules of the road – none of these have any real bearing on anything, it’s just one neverending race to your destination. Cannonball Run: Cairo. Because of this you can imagine that most drivers need to be, I’ll say “alert” or “quick”, because “good” wouldn’t really fit the typical Canadian description. There are a handful of traffic lights but they are generally always blinking, sometimes yellow, sometimes red, but apparently have only been around since the 80’s and “have yet to acquire local credibility”.

Many people have described the endless honking as random and meaningless although, while sometimes it is, most of the time there really is a purpose. Mainly letting everyone around you know where you are (quick beep), when you’re making a move (multiple quick beeps) and the one to watch out for, the “I’m definitely not stopping for you” (one long blare). Unfortunately that is of little help when you are on foot trying to cross an unbroken line of traffic 10 cars strong, spread across just 6 lanes and going 50 km/hr. So usually we did what has worked in similar situations in the past – use a local as a shield. The older the better since drivers don’t expect as much agility and seem less inclined to run them down like dogs (and us with them). Of course, that wasn’t always an option so occasionally we had to fend for ourselves – usually resulting in petty bickering over who didn’t go when they were supposed to, why someone would start and then jump back, and who was “going to get us both killed” (Thankfully we’re in Siwa Oasis now where we’re mainly dodging donkey carts). Once we started to feel like we were getting the hang of it Laynni decided to take a video of me crossing one of the nastier stretches right next to the Nile. Unfortunately she only got 15 seconds of me following a local couple through a pair of false starts before deciding that I had “pussied out” and shutting it off. Of course, right at that moment I decided to take matters into my own hands and proceeded to put on one of my more masterful performances – nimble as a cat, one hand waving a car on while the other deftly halts another, on and on until victory was mine on the far sidewalk….where I was immediately surrounded by 4 guys trying to convince me that I really needed to go with them for “ride felucca”. Meanwhile, Laynni remained stranded on the boulevard with no local help in sight until some little kid from my side recognized her plight and and just jumped out into the street, stopping traffic so she could cross.

In the end, those two things practically summed up Cairo for us; a neverending grind for our cash, but just when you least expected it somebody would come along just wanting to help.  Another example was when we got off the train in Alexandria, a couple and their two kids (both in a stroller) showed us to the bus ticket office, translated for us, provided directions downtown and then gave us their phone number in case there was anything else they could help with. Then they just headed off home , looking for nothing in return. Just goes to show that you can’t measure a place strictly by the people trying for a quick buck. Which provides the perfect segue to:

The Pyramids of Giza

What is there to say that hasn’t already been said? We’d seen all the pictures, and knew pretty much what to expect, but as with anything of that magnitude they are just so much different in person. Overwhelming in so many ways – size, grandeur and precision…. not to mention tourists, touts and hassle. They really manage to set the bar in a number of areas. And everything is for sale at Giza. For example:

Guy on camel – “You want ride the camel? Is far, very hot, for how much you pay?”

Guy next to camel – “You take picture with camel?”

Security guarding a restricted area – “Come. I move chain, just for you.”

Security guarding against climbing the pyramids – “You want climb? I show you, follow me.”

Guy selling pictures – “Here, take, my gift to you. No money…”

Some guy running up holding a staff – “Hold this.”

Exhausting but, hey, obviously it works.

We paid the extra to actually go inside the Great Pyramid of Cheops because, hell, how many chances will we get to actually go inside a 4500 year old pyramid? We started in a narrow tunnel low enough to need to duck, then came a tight incline where we were forced to sort of crabwalk and claustrophobia started to become a real possibility, then it opened into a larger cavern, still going up, before we crawled through the final opening to the Pharoah’s buried tomb. Around 20ft x 10 x 20 and almost pitch dark, with absolutely stifling humidity. It took some time for our eyes to adjust to the darkness but we were soon able to make out the only structure in the room, most of a stone sarcophagus that presumably would have held the mummified body. There were three people standing over it holding hands in a circle and, we discovered upon closer inspection, a woman lying inside the tomb. Maybe they watched too much scifi on Saturday nights in high school and were trying to channel the spirit of Agent Mulder. Either way, we just sat back againt the wall and enjoyed the bizarre feeling of being right in the middle of the Great Pyramid. And once that started to wear off, we were able to amuse ourselves watching a succession of Japanese tourists poke their heads in, totter over to the tomb to see what was going on before seeing the body, jumping back in alarm, giggling daintily, pointing and trying to strike up a conversation with our erstwhile medium. Needless to say, no one else was taking this whole process as seriously as they must have hoped. And they were still unable to tell us how they get the caramilk inside the Caramilk bar.

We saw a veiled woman across from us in a restaurant and realized we had never really considered the logistics of eating with your face covered. Not that easy , I’d say (mind you, I could probably get food on my pants while eating naked). Naturally she managed just fine but still each mouthful needed to be carefully maneuvered up under the veil without revealing any skin. Interesting process, although it pretty much rules out corn on the cob, cotton candy, or even a good old-fashioned beer bong.

One final note – on day 1 we meandered through the Khan el-Khalili bazaar, an overwhelming maze of tiny alleys filled with every type of shop or stall imaginable. Similar to those in Morocco, maybe just a little more condensed and confusing that Marrakesh, and more touristy than Fes. Either way, pretty cool. Then we stopped for a Coke at one of the streetside restaurants nearby (incidentally where we got ripped off for 15LE per Coke = $3 and 3x the going rate). Anyway, the point is, I had just given up arguing when Laynni suddenly screamed and jumped right out of her chair, scaring the crap out of everyone within 50 yards. After a second or two the waiter and I snickered at each other as we watched a little grey cat run off into the alley. We both shook our heads as if to say “Chicks, what are you gonna do?”. It was only later that Laynni showed me the multiple scratches and two deep gouges etched in her leg. All four claws at once, I shit you not. Which unfortunately meant that from then on I had to at least cover my mouth while laughed about it.

Next time: Alexandria and Siwa Oasis

Brought to you by the word “unfortunately” 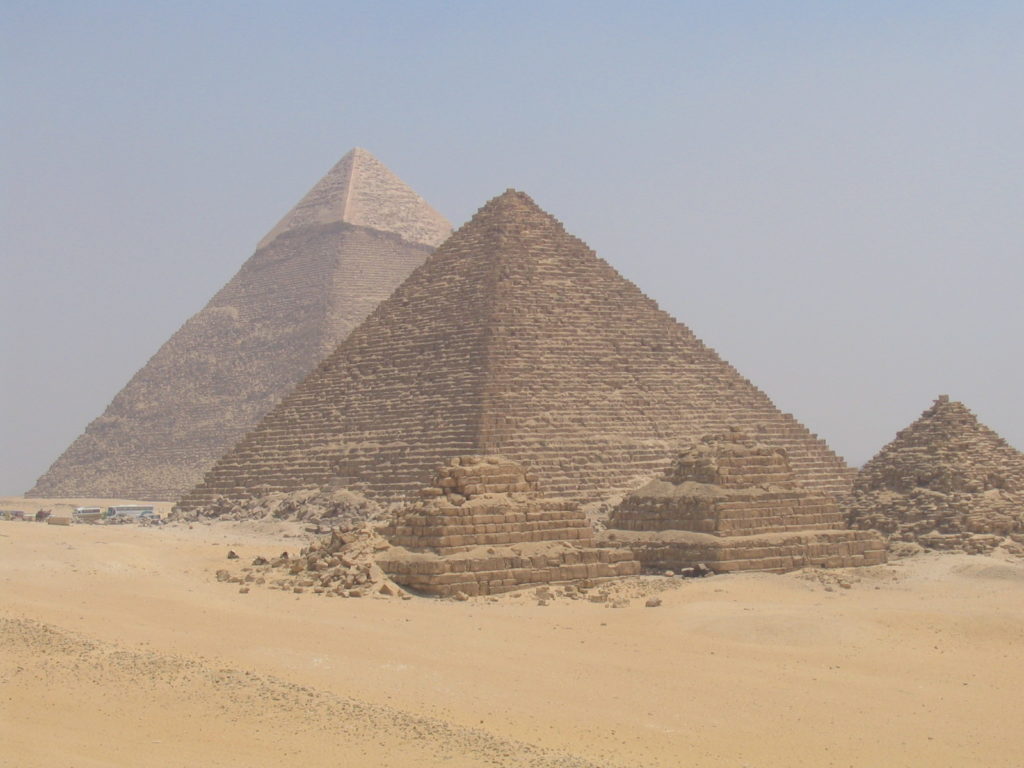 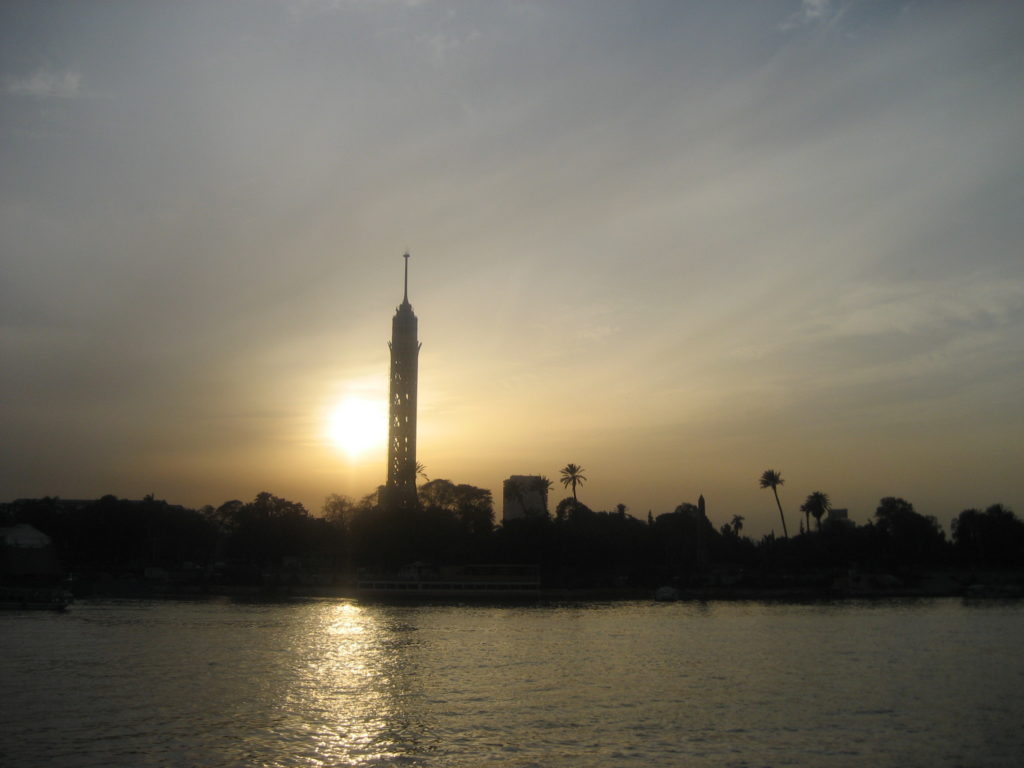 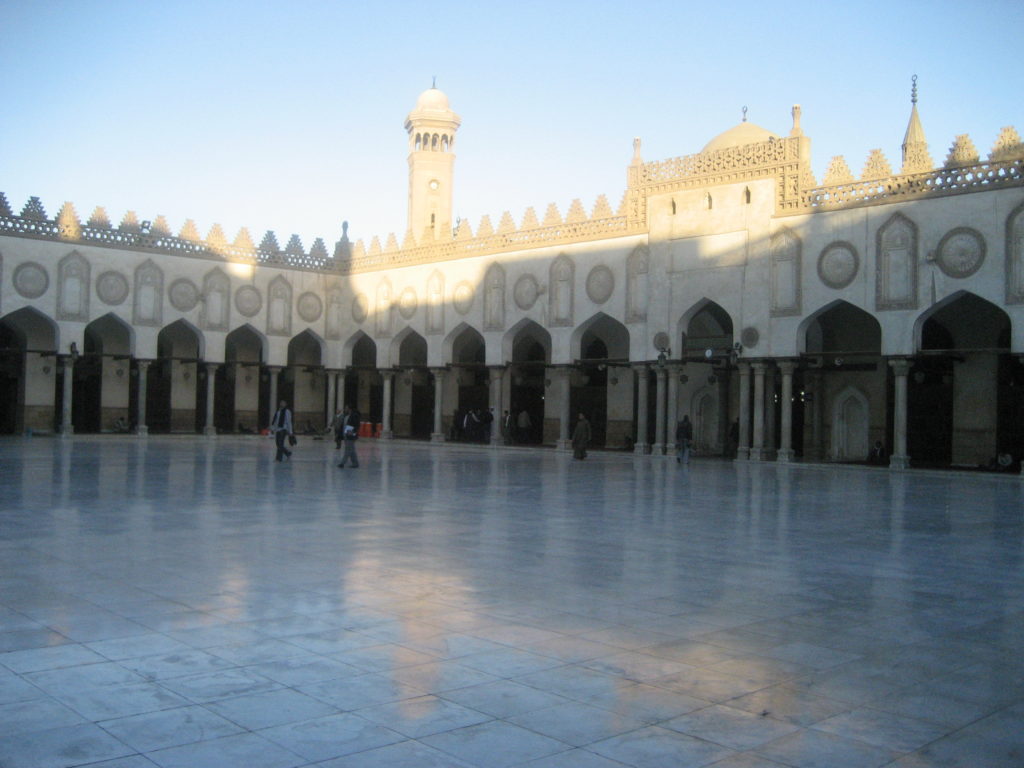 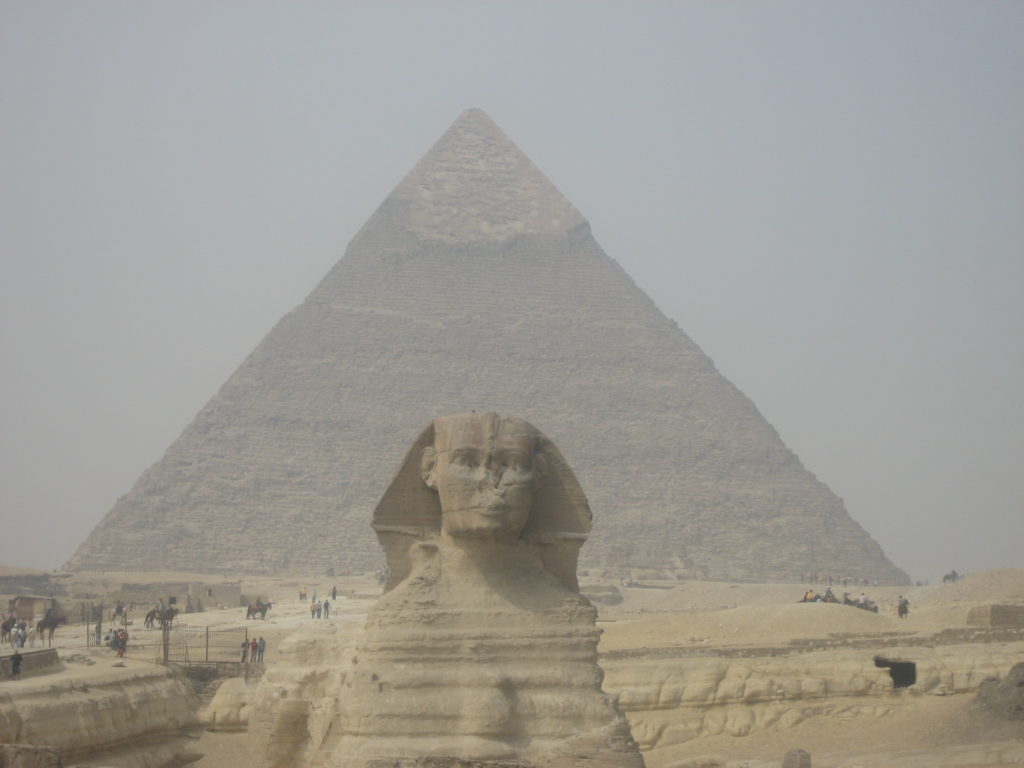 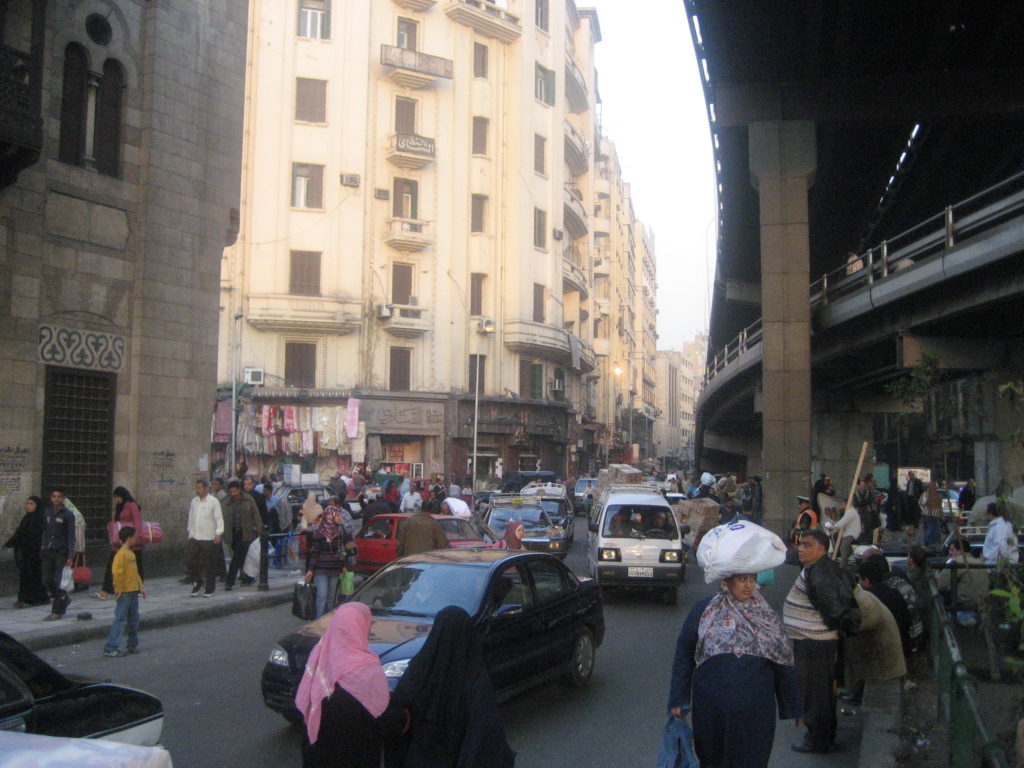 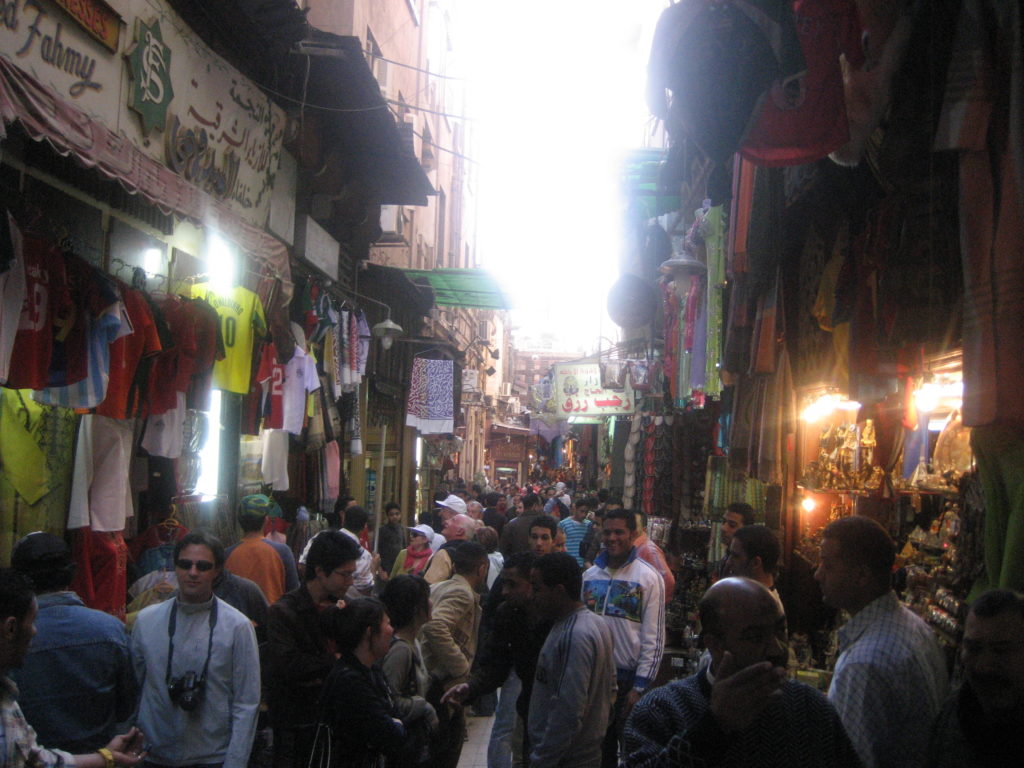