Just off the northern coast of Belize within a third base coach’s spitting distance of one of the nicest reefs in the world. If you picture Central America and Mexico as a plump female letter carrier, with Cozumel as her fleshy right arm, the Yucatan as the excess skin bubbling out of an optimistically tight sports bra, and Belize as the broad white flank, smooth and flat further out, tending to hilly jungle further inland, then Caye Caulker would be the painful pimple on your underwear line that follows two days of bus rides in the same panties. And Guatemala is the part they blur out on Dateline stories about trends in vaginal rejuvenation.

What is there to do on Caye Caulker?

Belize is famous for its world class coral reef, the abundance and diversity of its underwater world and the beauty of its ocean sunsets. So most people wander back and forth along Front Street alternately eating and getting drunk. Hangovers are lovingly coddled by crowded snorkeling tours, expensive scuba diving and riding around on big comfy cruiser bikes grinning like a guy who just convinced his hairdresser to let him rest his hand well up her thigh while he gets his perm.

How do we get there?

It takes a few hours by bus from the fantastic Tulum ruins to reach a city in Southern Mexico called Chetumal (located roughly where you find that one last pubic hair inexplicably thriving a ping pong ball’s distance from its nearest neighours), where fast ferries depart daily. Passengers face a disconcerting dog sniffing lineup before racing across ocean channels that, despite the route never venturing far from the mainland, at times can be as surprisingly bumpy as an HD close up of an areola.

How much does it cost?

Other than an unusually large mark up on waterproof snorkeling diapers and beach towels thick enough to mask the feel of lying on a crumbling cement dock, Caye Caulker is a reasonably affordable destination if compared with other Caribbean island playgrounds. Although there are no luxury resorts on Caulker, hotel prices still run the gamut from “on a two week vacation from New York”-expensive all the way down to more reasonable places that cost about the same as forty-seven pounds of Guatemalan strawberries. Beer is not particularly cheap, but bike rentals are, and you can get a four course lobster dinner for $10 as long as you eat it on a dark dock smelling of decaying fish and salty arm hair.

What’s with the dumb name?

Back in 1873 British pirate Henry Scurveyson chose to name it in the local dialect in an effort to hide the island and its underwater treasures from the curious natives who would otherwise surely spoil the whole atmosphere by dumping their trash in the ocean and using the word “brah” excessively. While “Caye” translates simply to “flat island with numerous Chinese grocery stores”, the term “Caulker” was intentionally off-putting as the local translation for “I may just shove this bamboo pole up your ass until it tickles your uvula, just watch me”.

Where is the best place to catch some rays?

A hurricane divided the island in two a few years back creating a narrow, fast flowing channel known as The Split. On the south bank a small chunk of gravel the size of Al Pacino’s shoe lift closet is bordered by a popular clapboard sunset bar and a variety of rusting industrial equipment that provide a whimsical backdrop to the people fidgeting uncomfortably in search of which particular large stone is causing the most discomfort. Usually it turns out to be a bottle cap, though.

I really like sluts in small bikinis. Should I shave my back?

I’ve always wanted to fondle a fish. Is there a way to bring that dream to fruition on Caye Caulker?

You bet! Every snorkel guide worth his salt will yank hissing moray eels out of their sandy dens, poke sharp objects at unsuspecting lobsters and wrestle harmless nurse sharks into perfect petting postures, all while flashing gleeful yet intimidating grill-plated smiles.

Why were Groupers given such a stupid name?

It all goes back to changes in the education system in the 40’s.

Why do people say you shouldn’t touch sea turtles?
Well, part of the reason is that their shells have a very fine coating that protects them from predators and certain underwater bacteria. But mostly because it is widely considered a gateway fondle on the road to zoophilia, eventually leading to waking up some morning bleary-eyed and disoriented next to a snoring squid with an amateur tattoo of a fat Dutch sailor.

How close can you safely get to sharks and sting rays during a feeding?

That depends on how many of your small fleshy appendages you are interested in retaining, and whether or not you still reek of oysters from last night’s date.

Is there any wildlife on the island?

Not much. Other than the occasional drunk group of Aussies staggering around in a disoriented daze just after sunrise, and the bevy of fascinating creatures available for fondling below the ocean’s surface, Caye Caulker’s main claim to wildlife fame is a toss up between skittish sun bleached Yorkshire Terriers and the lizard fanatically patrolling the wall above my pillow.

What language do they speak in Belize?

Are fat white people revered on Caye Caulker the way they are in rural Saskatchewan?

They are, but less for the way their thick layer of padding helps them survive harsh Saskatchewan winters and fills out their No. 4 Roughrider jersey in an amusing manner, and more for their ability to float with their head above water and simply destroy all-you-can-eat seafood nights.

Are the roads paved? I have this really cool rubber ball I like to bounce on my way to lunch. It looks like an iguana’s eyeball. I got it in Mexico.

How hard is it to find my way around?

Caye Caulker is long and narrow, with just three lengthwise streets – Front, Middle and Back. Front Street features the majority of the hotels, restaurants and barrels sawed in half for barbequing random things. Middle Street is where you’ll find the tiny soccer field, the bank, the laundry and the abandoned truck that is the pride of Caye Caulker’s modest fleet. Back Street has a dock, a gas station and the very mangrove bushes where you would expect to find its eponymous “Boys” performing an a cappella version of “Quit Playing Games With My Heart” while wrestling shirtless and blushing.

I love the loud ramshackle buses of Central America – is there anything this awesome on Caye Caulker?

Unfortunately, no. Other than the occasional delivery truck, most transportation on the island is via four wheel drive golf carts with large knobby tires and uninterested, sleepy eyed drivers. While these peppy little contraptions are clearly no substitute for Chicken Buses sputtering clouds of black smoke as they roar and bounce around blind mountain hairpins fearless behind their “God is my Guardian” holographic stickers,  but they are much easier on gas and are small enough to park anywhere roomy enough for Kirstie Alley to enjoy a bucket of chicken.

How is the lobster?

Cheap, but overrated. Like ribbed condoms, or dating a ballerina.

Can I get pregnant if I eat too much jerk chicken?

Possibly, especially if you eat it in the back seat of Luther’s golf cart, the one with a tinted wind screen and flames on the plastic rain tarp, at 4 am after downing nine Belikins and losing your panties somewhere behind the karaoke bar.

What exactly is clapboard, and why does it give residents of the Caribbean such a hard on?

“Clapboard” is really just a slang term for salt-bleached plywood that smells faintly of Marie Sharp’s Hot Sauce. It is mainly this odour, and the occasional peep-holes that develop over time, that cause erections among Garifuna males often quite disoriented by marijuana and heavy dreadlocks.

If I look directly at the sunset too often will I eventually grow a prehensile tail?

Only if you combine it with large quantities of rum punch and semen. 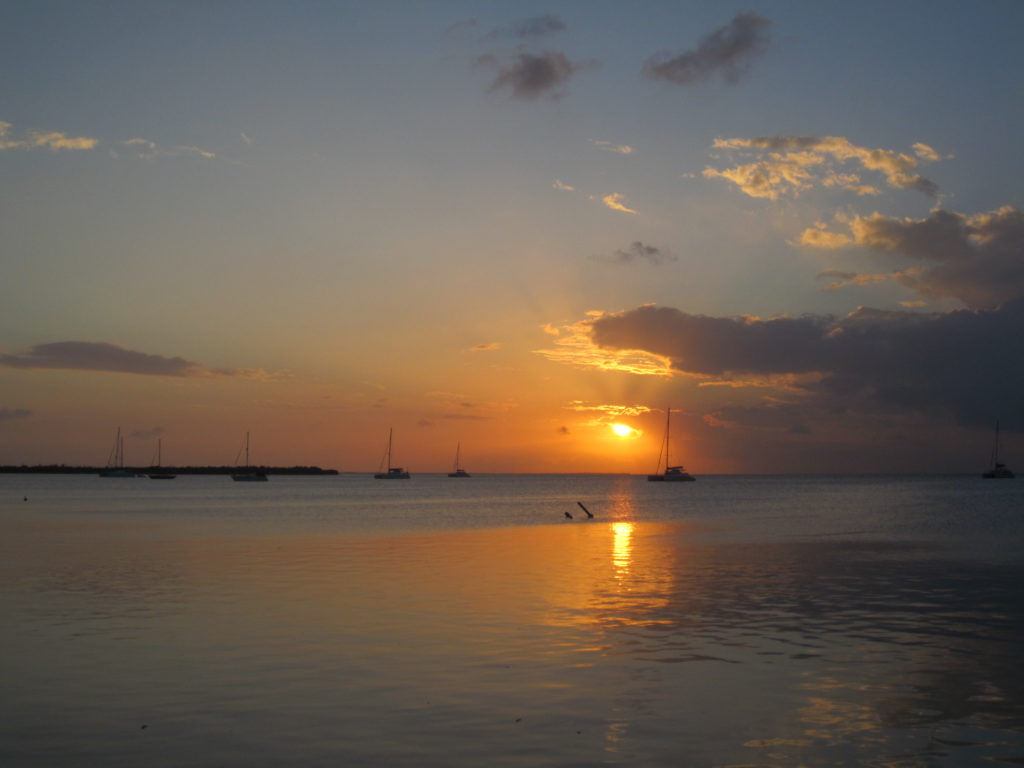 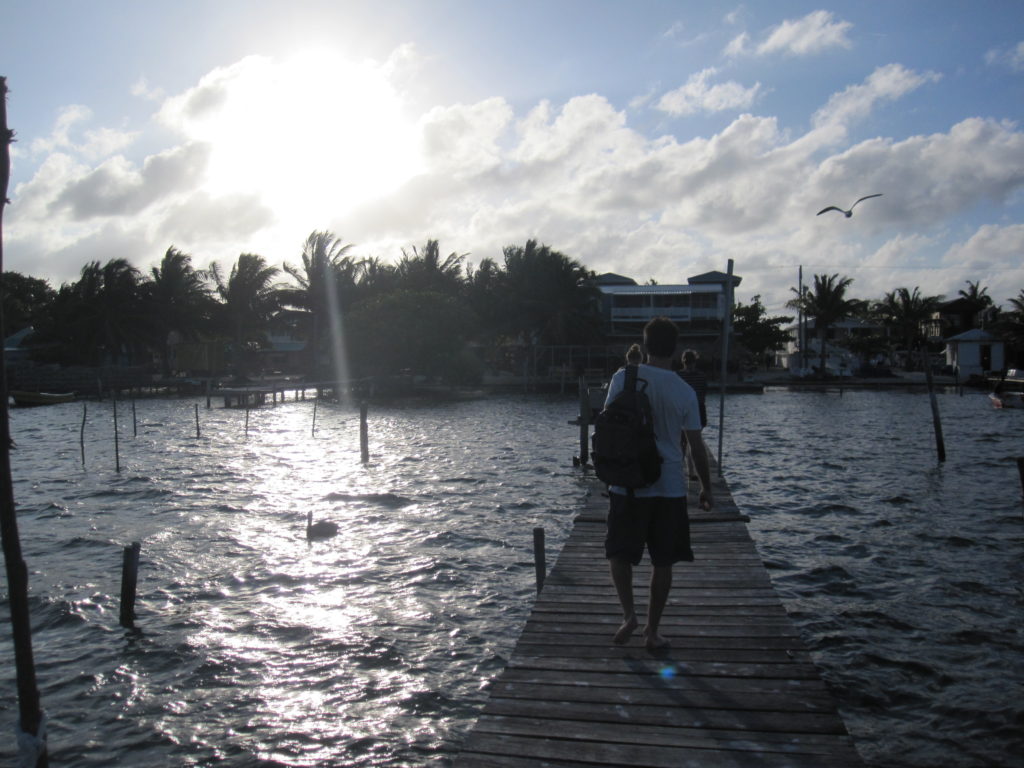 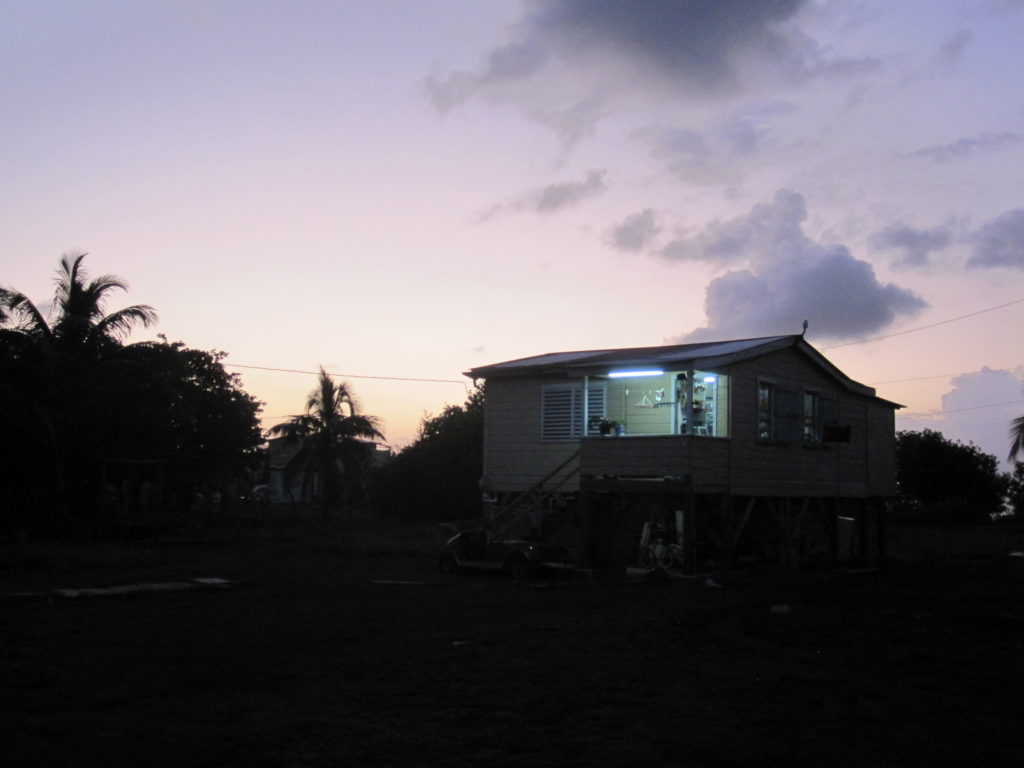 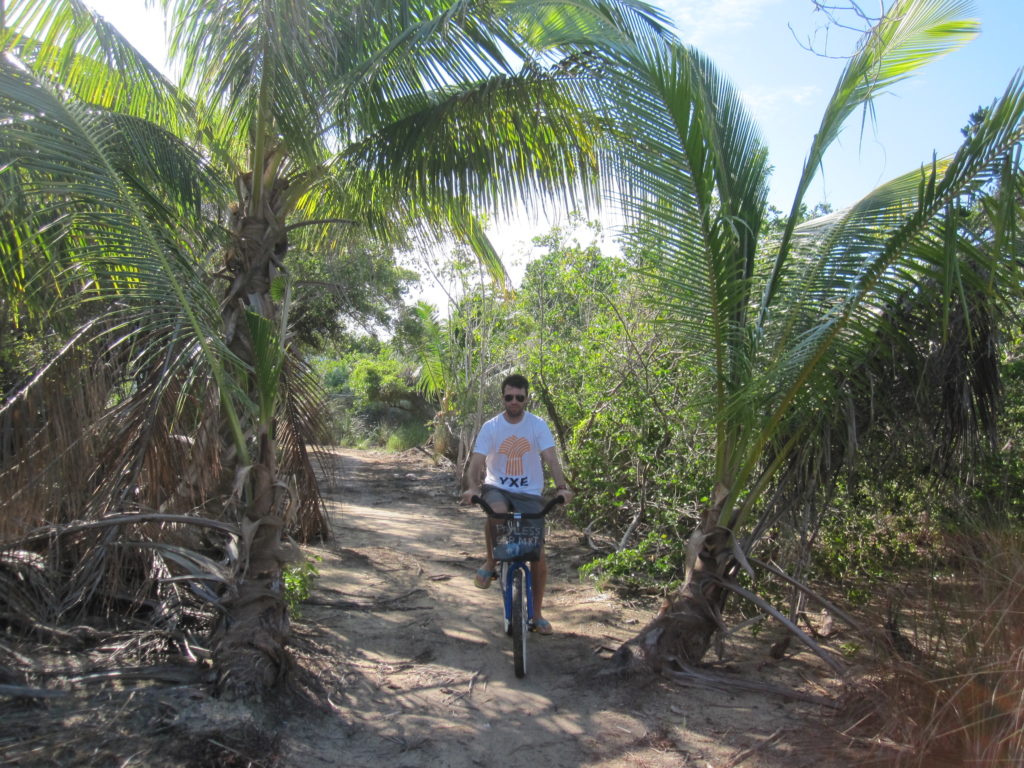 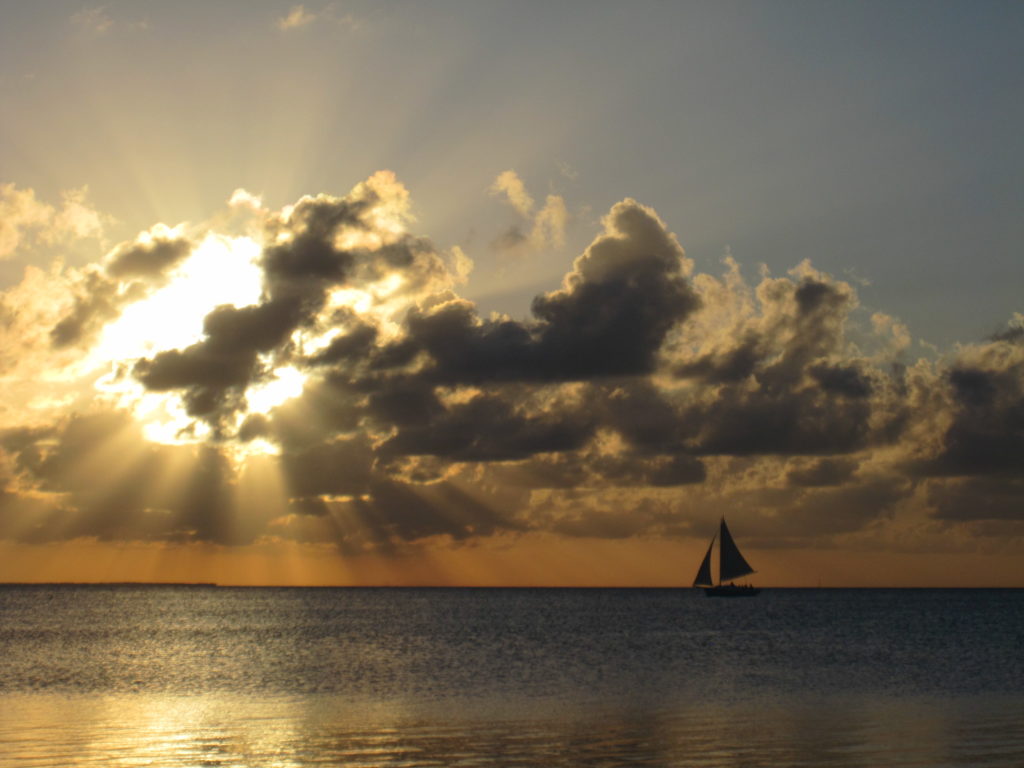 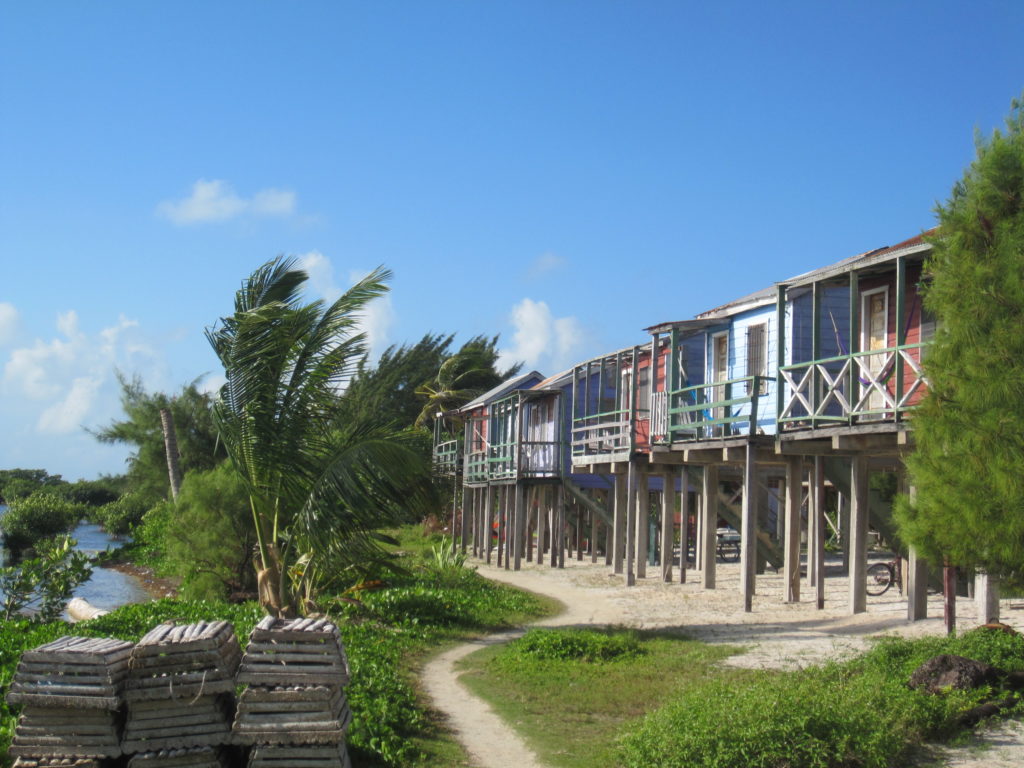 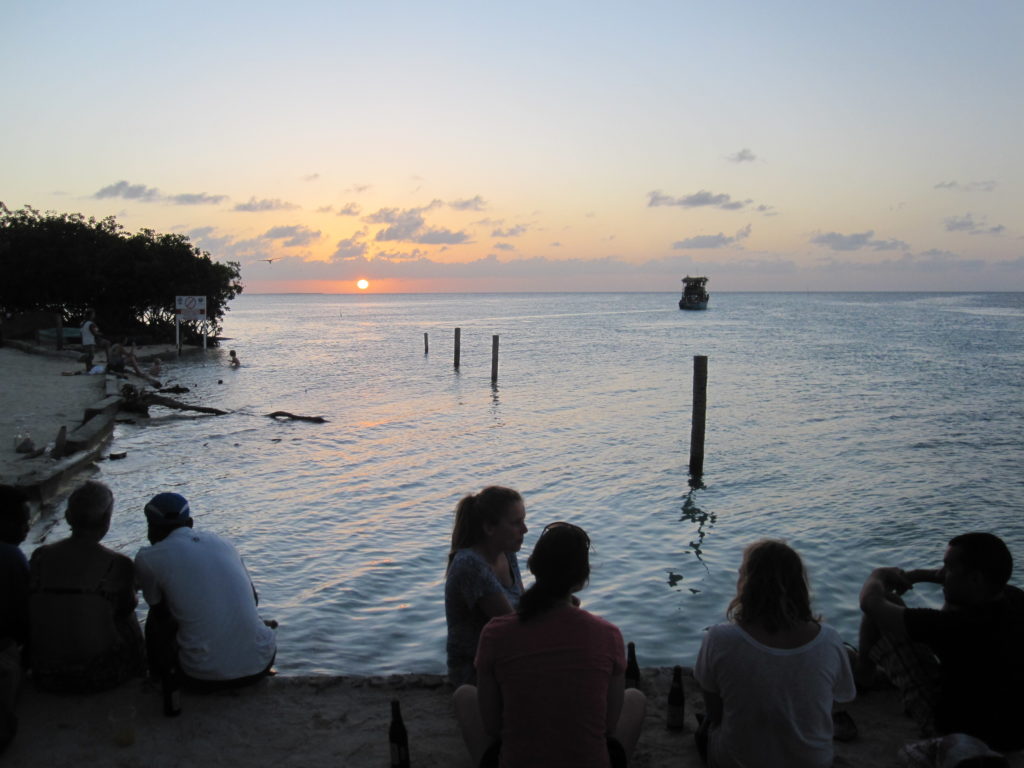 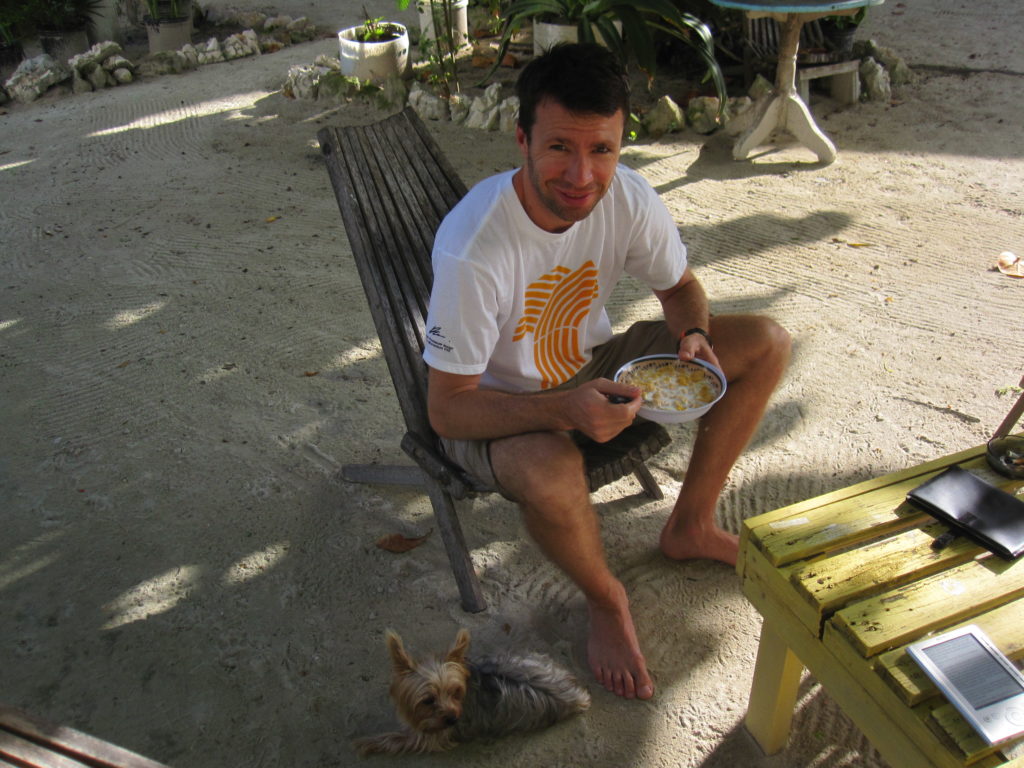 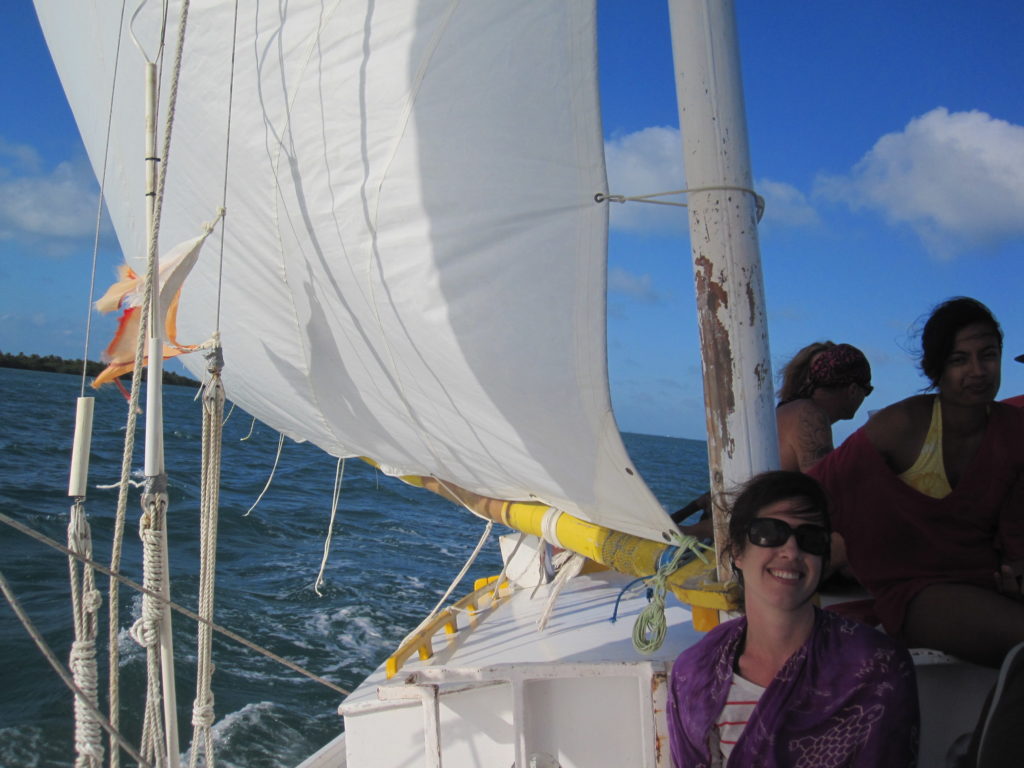 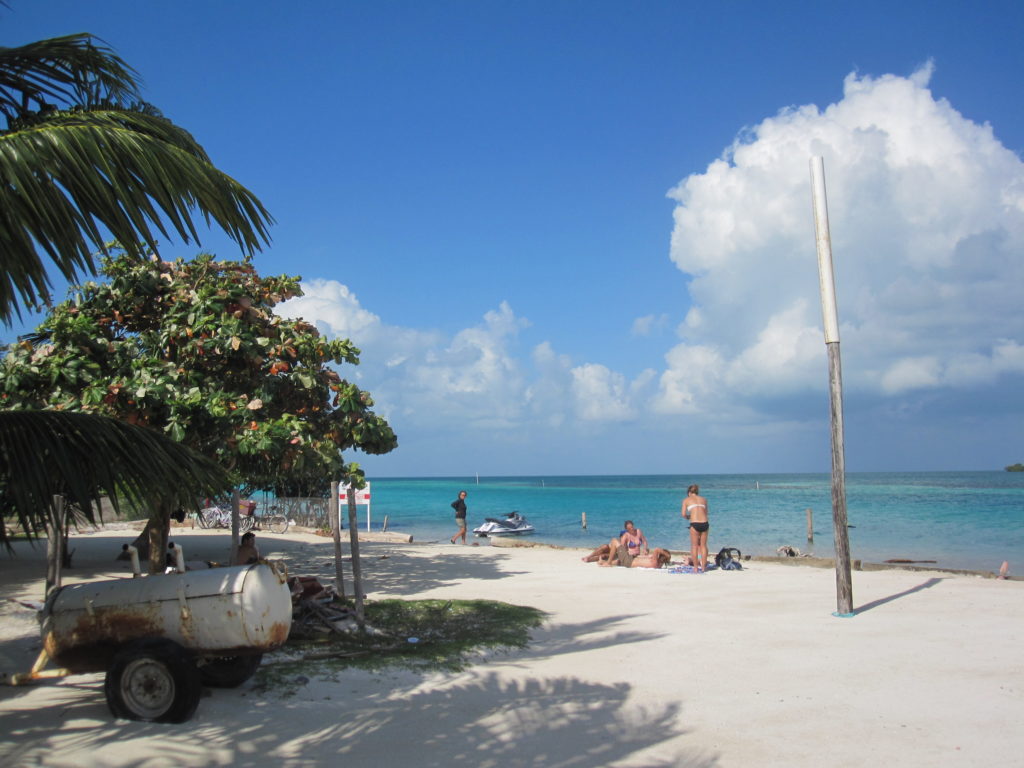