A short and reasonably comfortable Ryan Air flight out of Brussels put us down 1,500 kilometres southeast (yet somehow still in the same time zone) in the wonderful capital of Zagreb, in the Balkan wonderland that is Croatia. Still relatively unknown in North America, Croatia has been a budding tourist hotspot among Europeans for quite a few years now thanks to its absurd surplus of beautiful coastline, picturesque medieval cities and leggy broads in painted-on jeans and skyscraper heels. They also apparently really excel at tennis (see: Novak Djokovic and Ana Ivanovic), soccer (see: Nikica Jelavic and Luka Modric, but pointedly ignore Branislav Ivanovic) and producing rough scented toilet paper (see: a jubilant Mark Yemen). Following Zagreb – Step 1: Acquire tiny red Peugot (small red vehicles being our M.O. and all). 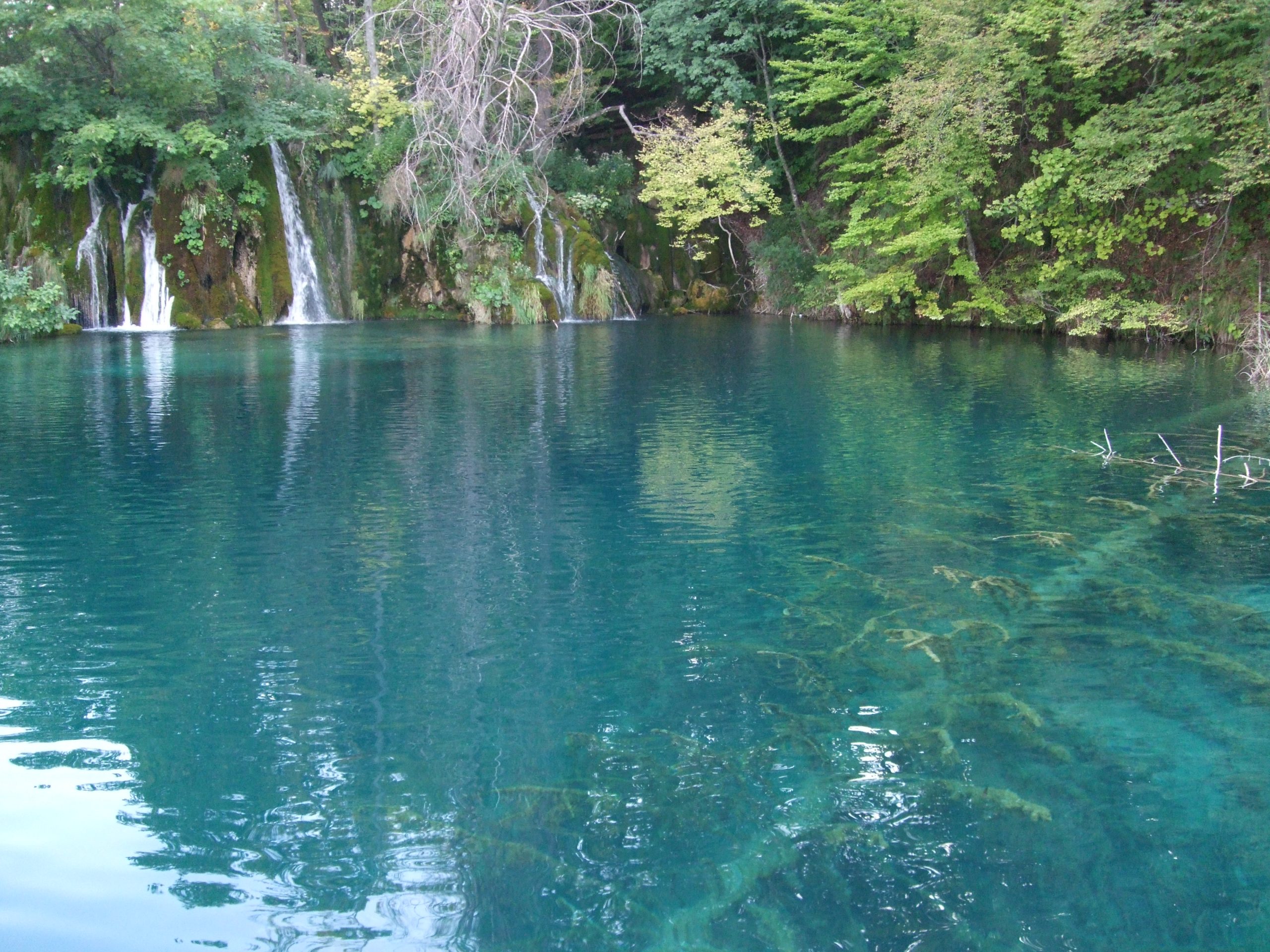 Step 2: Blindly follow GPS Jelena to our hotel somewhere in the vicinity of Plitvice National Park, one of the best day trips from Split.

Step 3: Wander the huge maze of boardwalks in, over, around and alongside all the stunning lakes, waterfalls, caves and large, unwieldy groups of amateur Asian photographers common in Croatia.

Step 5: Sit back and let GPS Jelena’s manly croak guide us down the coast to the 4thCentury retirement home of the Emperor Diocletian (known primarily for love of bureaucracy, his surprising decision to voluntarily name four “co-emperors” and revolutionizing taxation on grog and sheepskin condoms). 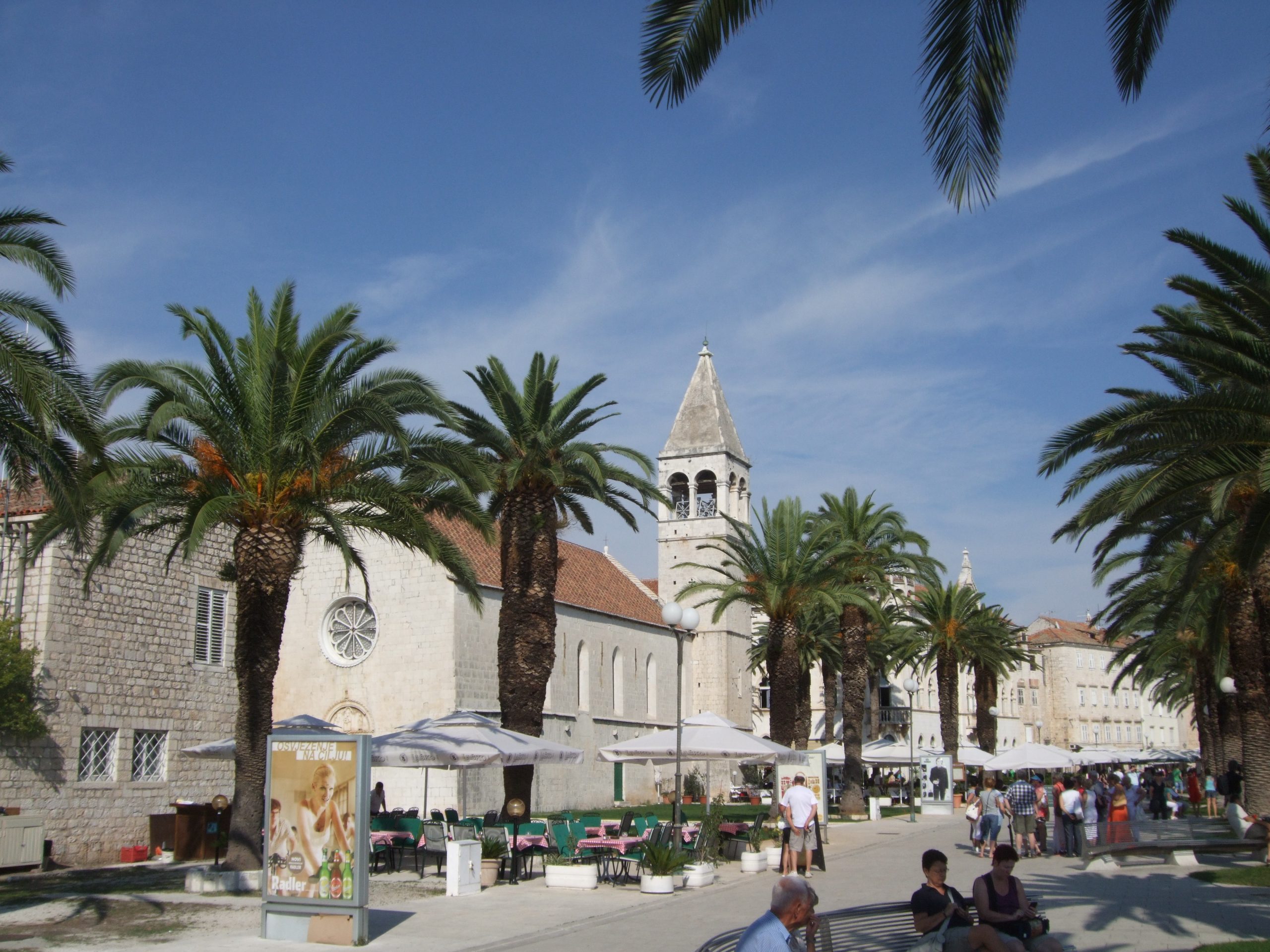 After a couple nights in a surprisingly modern 2 bedroom apartment in the heart of Split’s old town we moved on by Jadrolinija ferry to the island of Korcula. This provided two firsts for the trip – our first bad weather (rain, wind, occasional drafts of foot odour) and what I would term Andie and Mark’s introduction to what we affectionately refer to as “shitty travel days”, in which we hid from the rain, struggled with motion sickness on the ferry, then struggled with motion sickness on the bus when we left Korcula. We’re currently working on a badge that shows a hunched stick person doing mini dry heaves and keeping its mouth tightly closed. It also comes with a cape and sanitized rubber gloves. Even after we arrived in Dubrovnik the storms kept up all night, catching us off guard more than once, and continuing on angrily through the night like an old man petulantly complaining about the cost of parking these days.

But Dubrovnik! My, my, what a city. Known to HBO slash Fantasy slash Witty Dwarf fans as King’s Landing from the new season of Game of Thrones, it turned out to be far more than just a place where child kings behead noble warriors and sassy whores ply their trade for gold pieces instead of Platinum Discover cards. It also has a terrific name which seems to be the only Croatian word I can properly pronounce in a way that makes me sound like an evil Bond villain who has some sort of unique and terrible skill but is still wholly unable to avoid underestimating the guy who’s been foiling villains like me and Jerry Jones for 50 years. Besides that, it is also one of the best looking cities I’ve ever seen, apologies and honourable mention to Bruges, Bhaktapur and that town from The Truman Show. Old school good looking, like Jon Hamm or the guy from the Dos Equis commercials, not new style good looking, like fat offensive linemen or the Geico lizard. It’s incredible old town is confined by two kilometres of huge impenetrable stone walls (sort of like Mit Romney’s filing cabinet) which you can walk all the way around taking in some of the most impressive views imaginable (sort of like Scarlett Johansson’s lap pool). Filled to bursting with tiny alleys, shops, restaurants, puffy cruise shippers and stairs, so many stairs. Oh, and ice cream. So much ice cream. Plus…the worst hamburger steak of all time (which it seems to me is really saying something). We wandered, we climbed up, we took photos, we climbed down, we took day trips, we visited shitty aquariums, we lived, dammit, we lived! 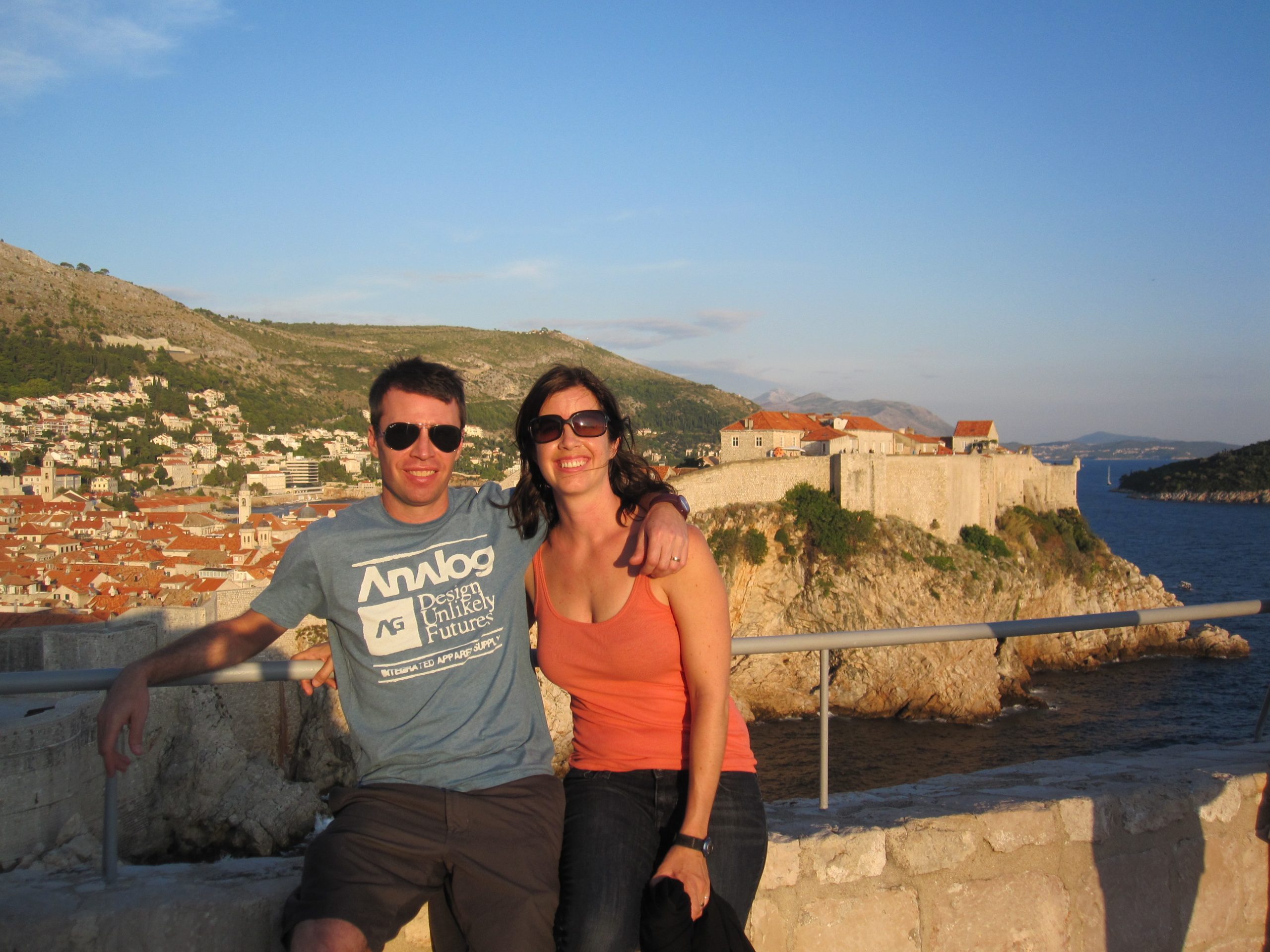 As for our day trips, they were a tale of two “beaches” (with “beach” in Croatian meaning someplace to get nearly naked and lie uncomfortably on any surface hard enough to shatter Jay Leno’s jaw). There was upscale Cavtat, all yachts and wine bars and loungers and condos and saggy jowls, followed by Lokrum Island, which was more public ferries and Panini cafes and sarongs on the ground and bushes to pee behind and wild peacocks. Impressive credentials, all.

Throw in some very friendly people, a bevy of English speakers (our Croatian is a touch rusty) and great little grocery stores on every corner and it all adds up to “exceptional place, wish we’d had more time, have to get back some day, time to go, the ferry to Italy is boarding”.

Now to send you off with some beguiling celebrity photos from… 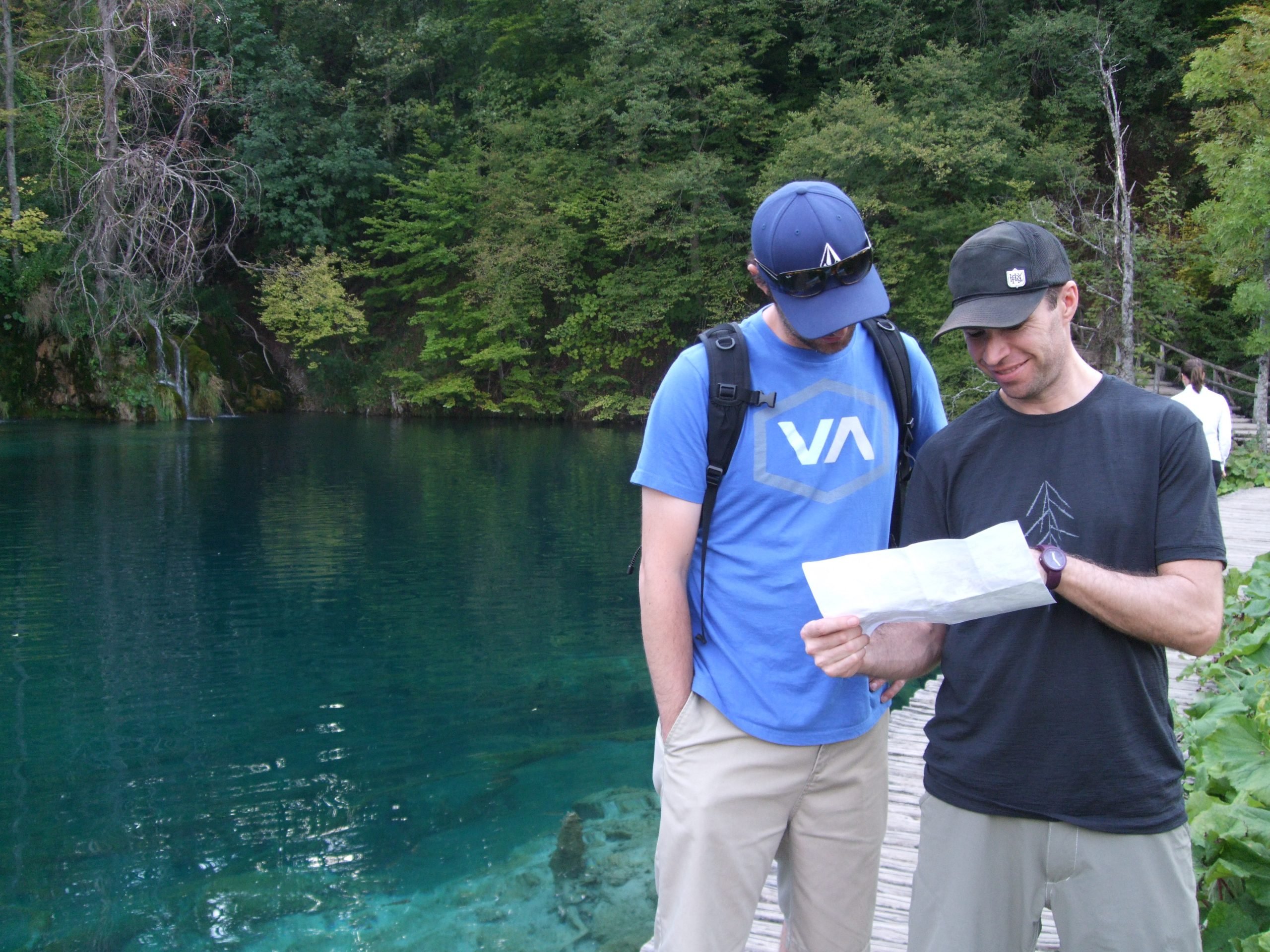 Rumours that Mark and Dean are collaborating on a new project seemed to be confirmed here, heads together in apparent deep thought. Possibly they were discussing the logistics of an allegedly revolutionary sex scene sources say will be over 23 minutes long, involve the two of them, Zsa Zsa Gabor’s cousin, 3 ocelots and a 4 minute nap right in the middle. 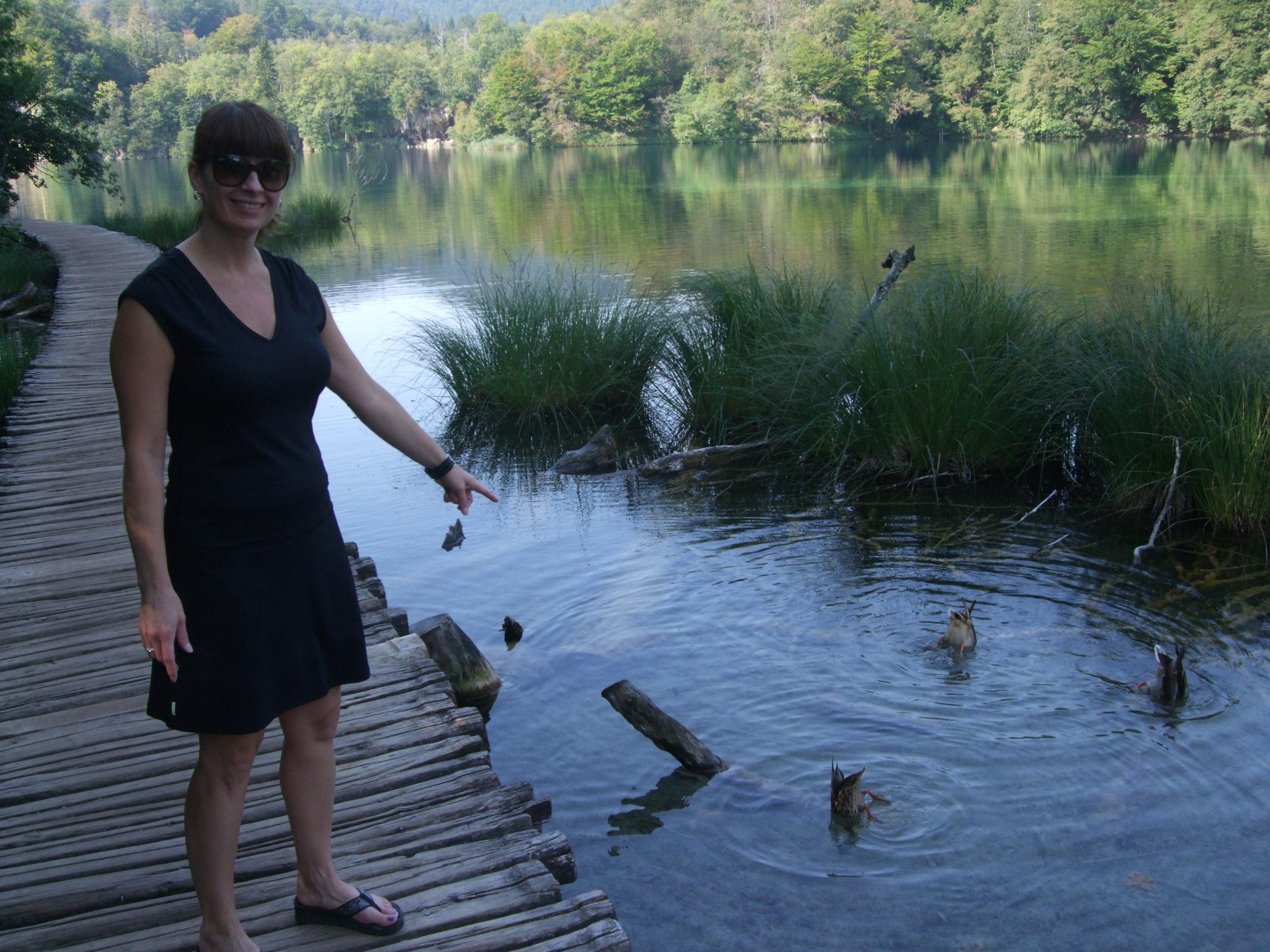 A “confidante” claims that her “favourite thing in the world is duck bum” and, based on this photo, we can see why. While most were admiring the aquatic scenery of lakes, trees and diminutive waterfalls, Andie was focused elsewhere, where those handsome Plitvice duck rectums clearly have her saying “bottoms up”! 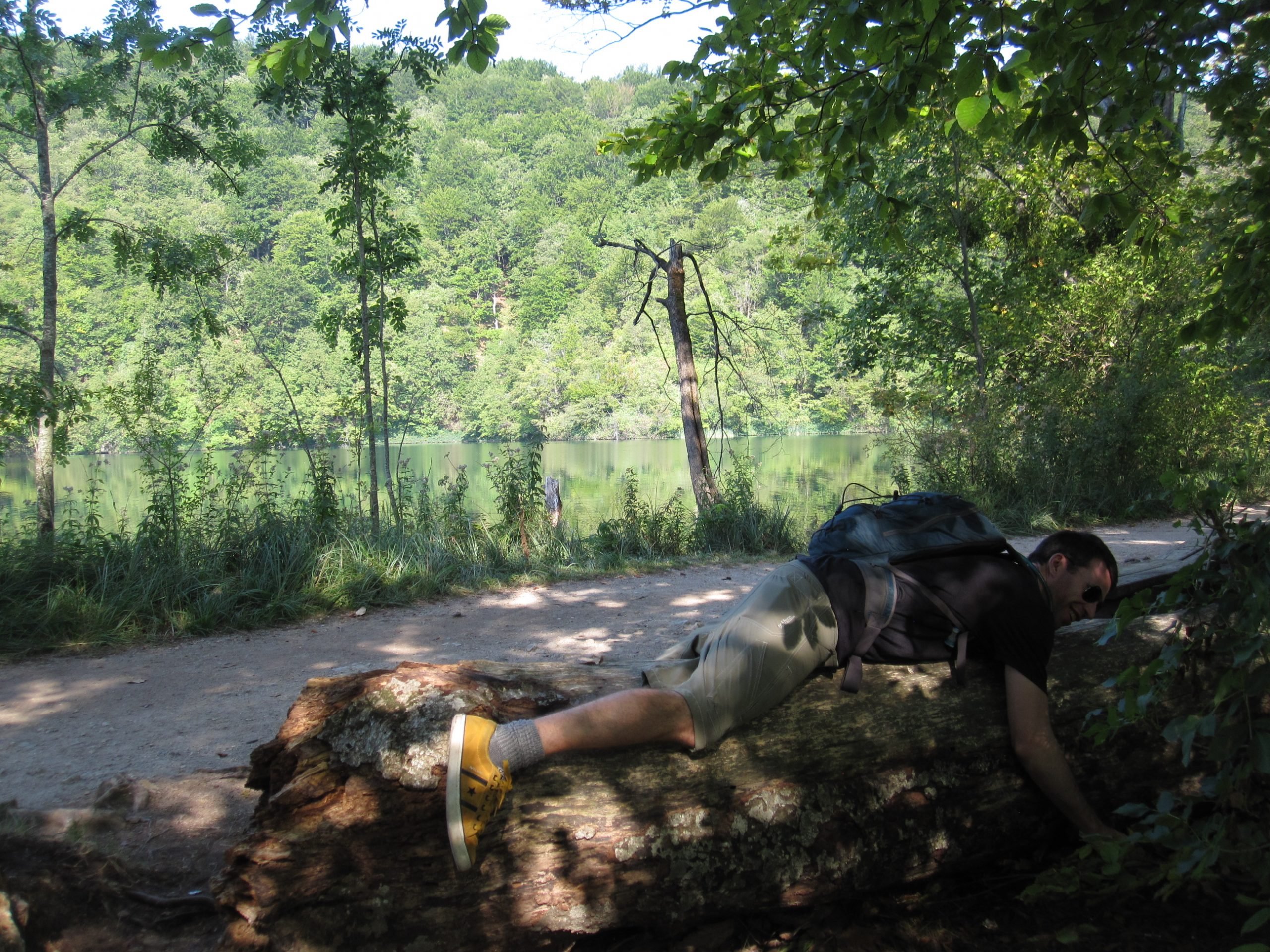 We caught him in a private moment getting up close and personal with some of the local flora recently. The two are thought to be remaining casual and so far no word on how long it took to get the splinters out. 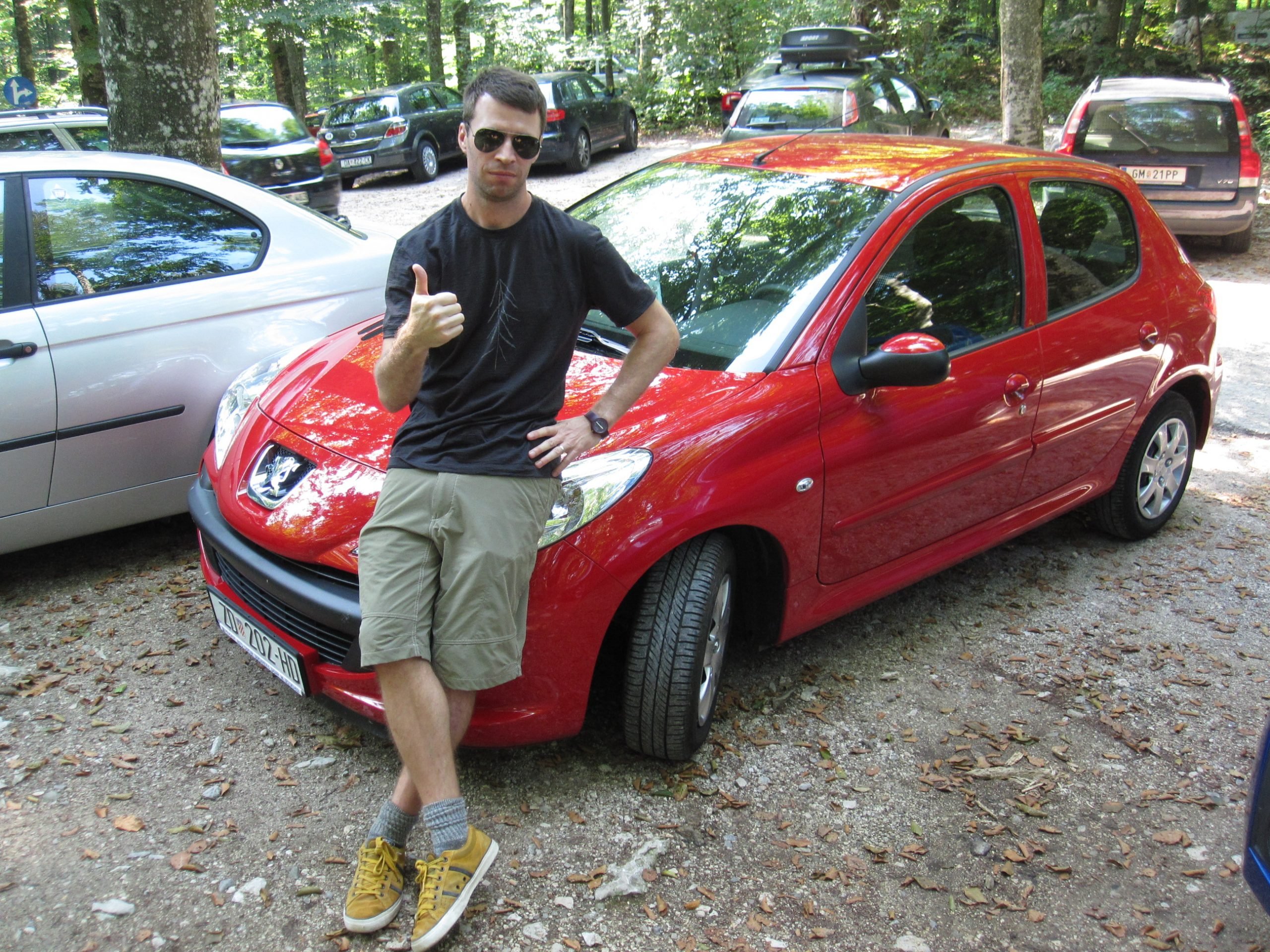 Has turning 40 triggered a mid-life crisis? He wouldn’t be the first, shown here posing in front of his new rental car, having decided to try on this shiny little Peugot (economy model) on for size. Well, we can’t say what this tells us about his manhood, but what lady doesn’t appreciate a truly white-knuckled crotch embrace? Besides your masseuse, I mean. 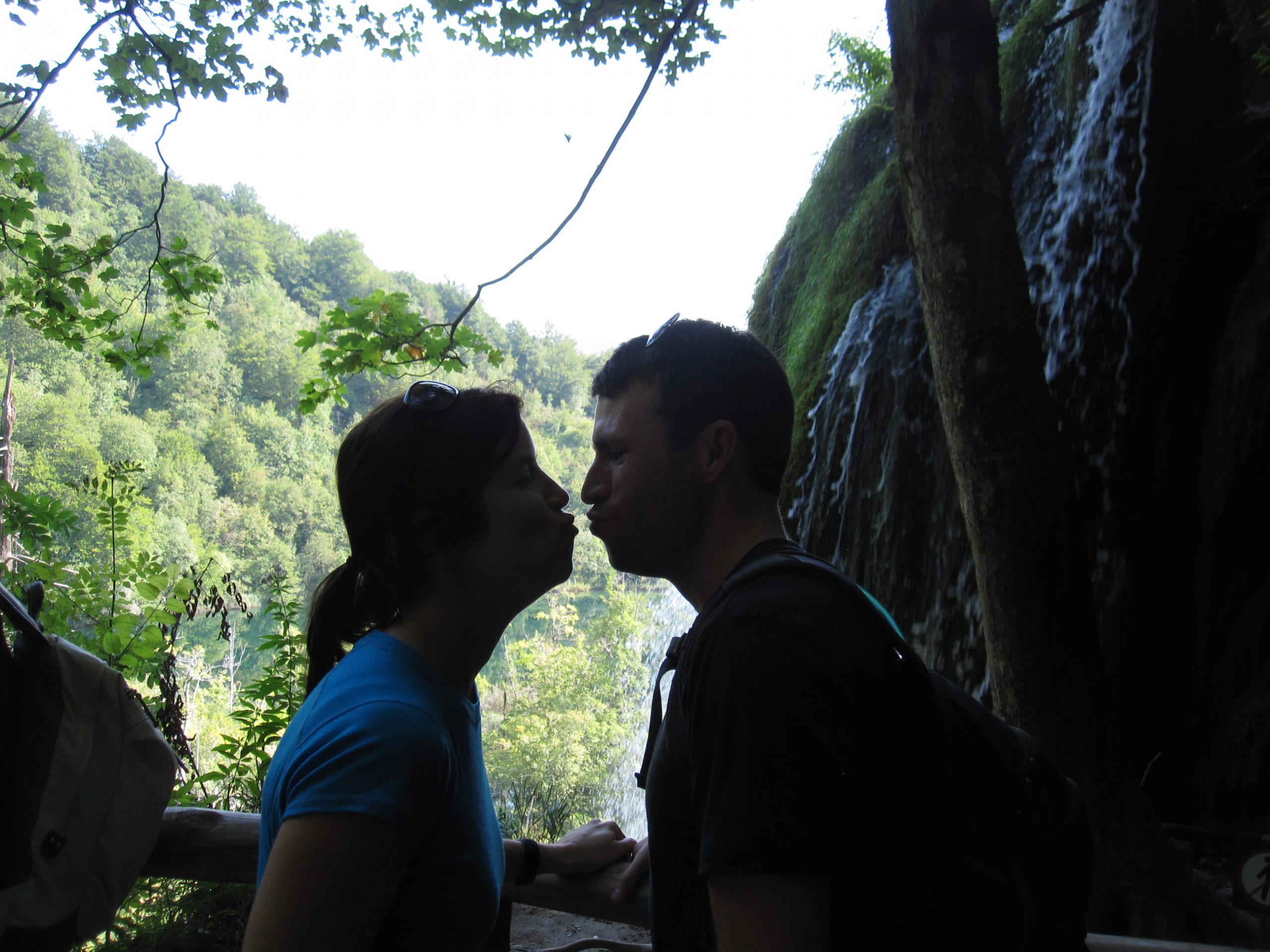 Dean and Laynni moved quickly to quell breakup rumours Tuesday with this sexy display of eroticism near one of Plitvice’s most picturesque waterfalls. It’s easy to see why these two are fixtures on Central America’s Sexiest White Chicken Bus Passengers lists. 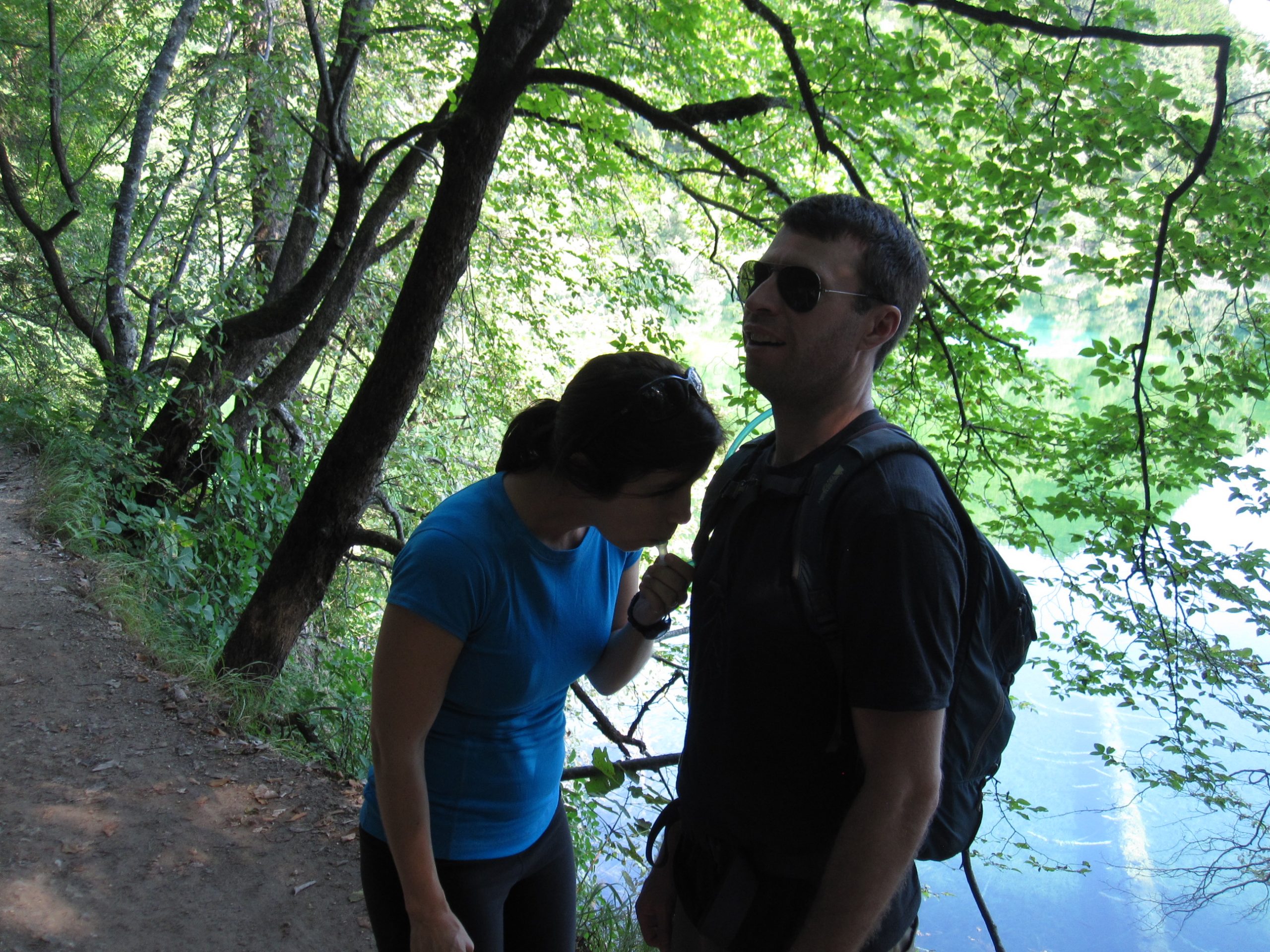 Not long after, things started getting more graphic, involving nipples, hoses and submission, as seen here. Eventually authorities were forced to ask them to leave the park which led to a shoving match between Dean and a park ranger who refused to make an exception for Laynni’s “seriously chapped and flaky tongue”. 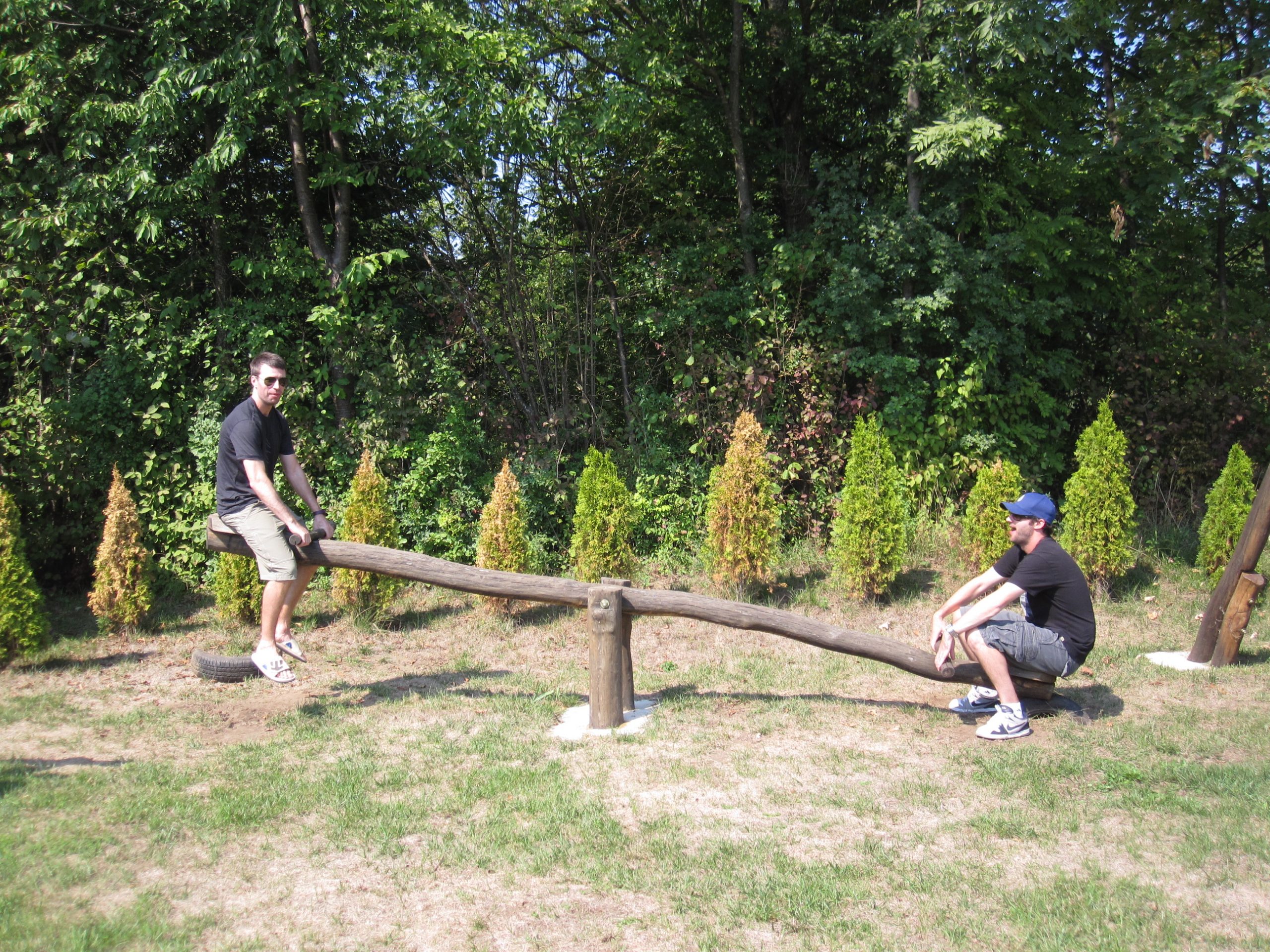 You’re never too old to share a long wooden pole, as Mark and Dean showed us outside Hotel Plitvicka Sedra. Witnessing that kind of childish glee on the face of a grown man is extremely rare outside of “Splash your Waitress with Rib Sauce” night at Hooters or the Teen Choice Awards. 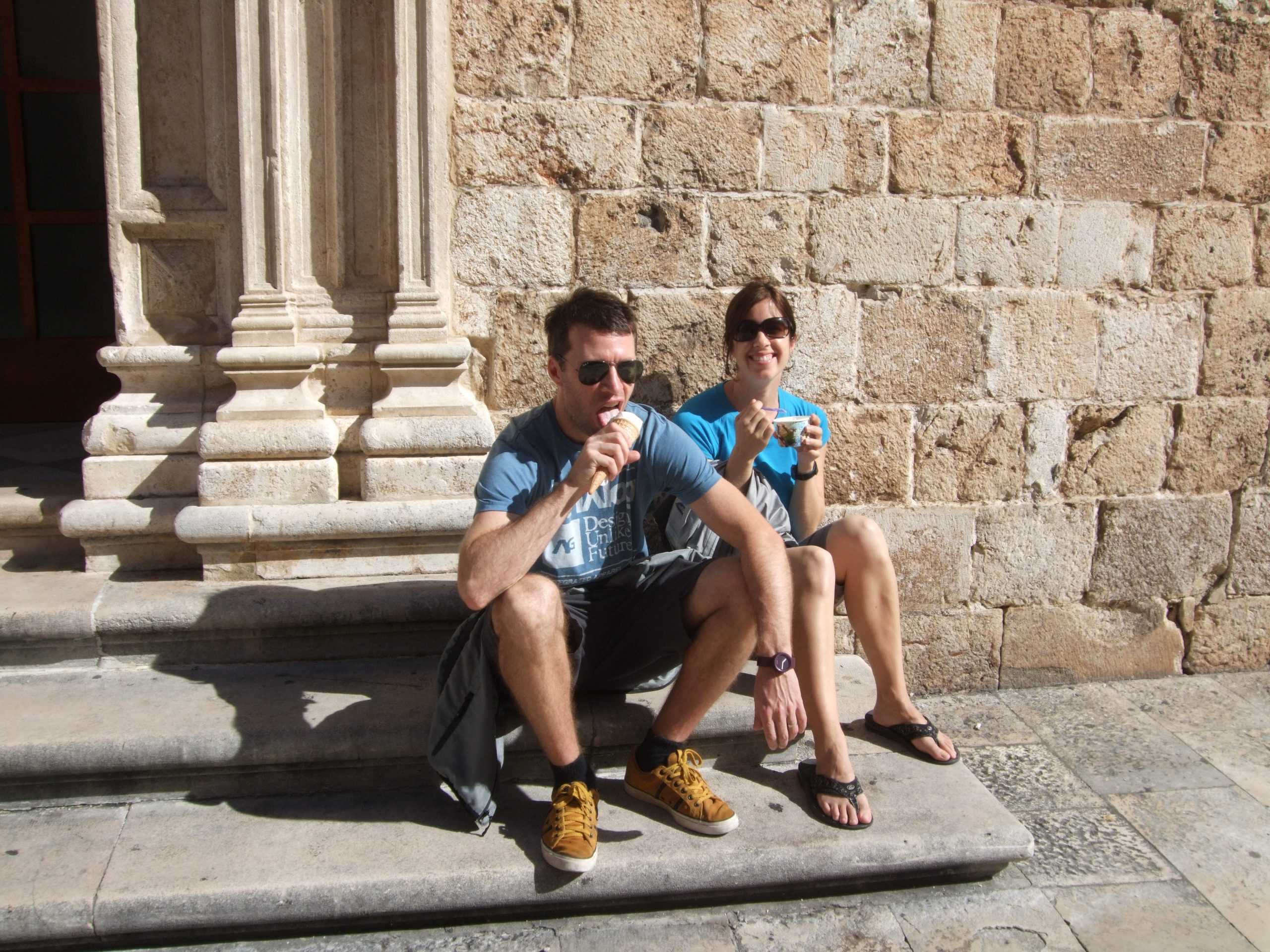 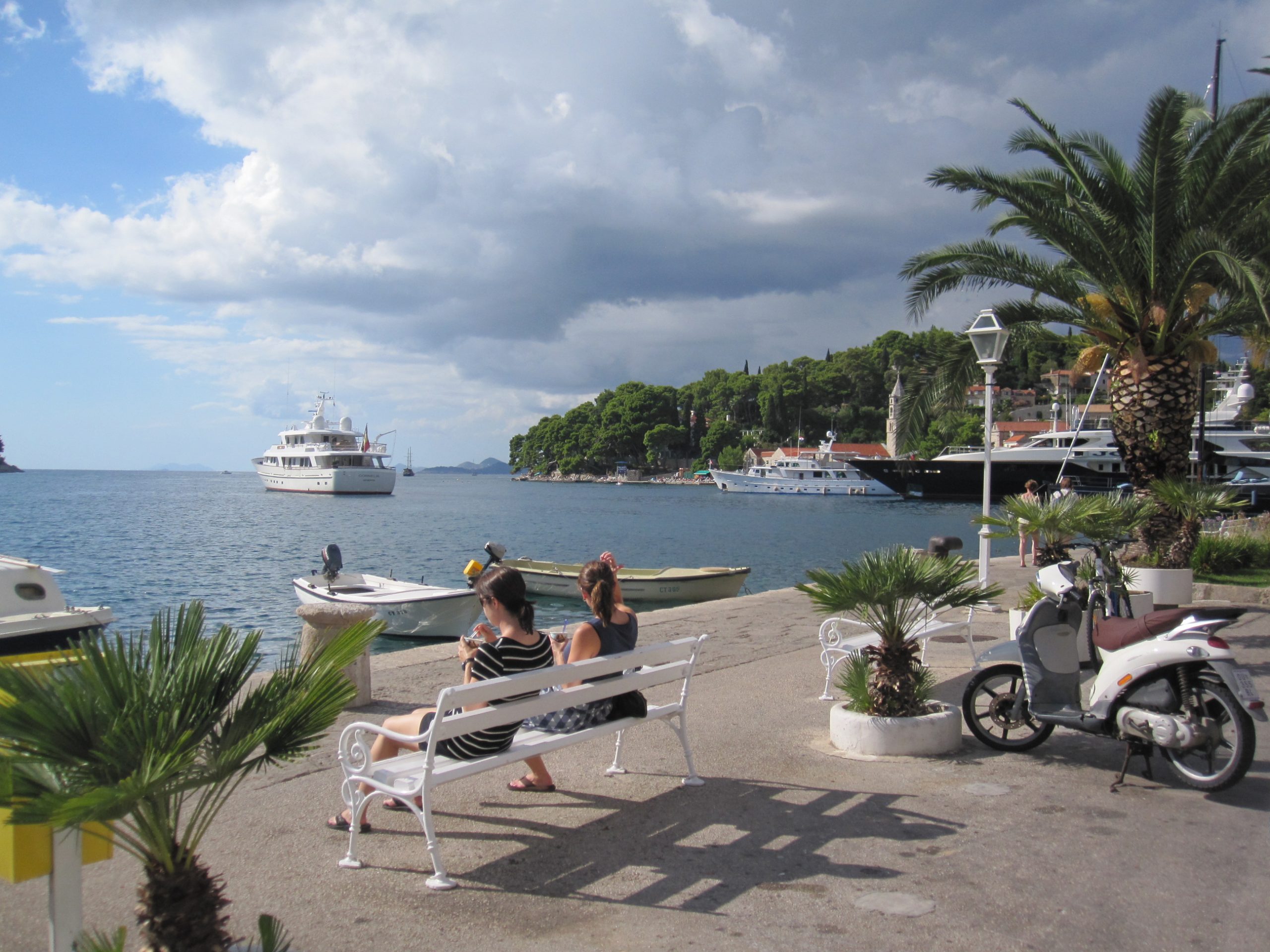 Laynni and Andie were spotted scanning the Cavtat horizon on Saturday while dressed for short term romance in their moderately tight pants and sensual open-toed footwear. 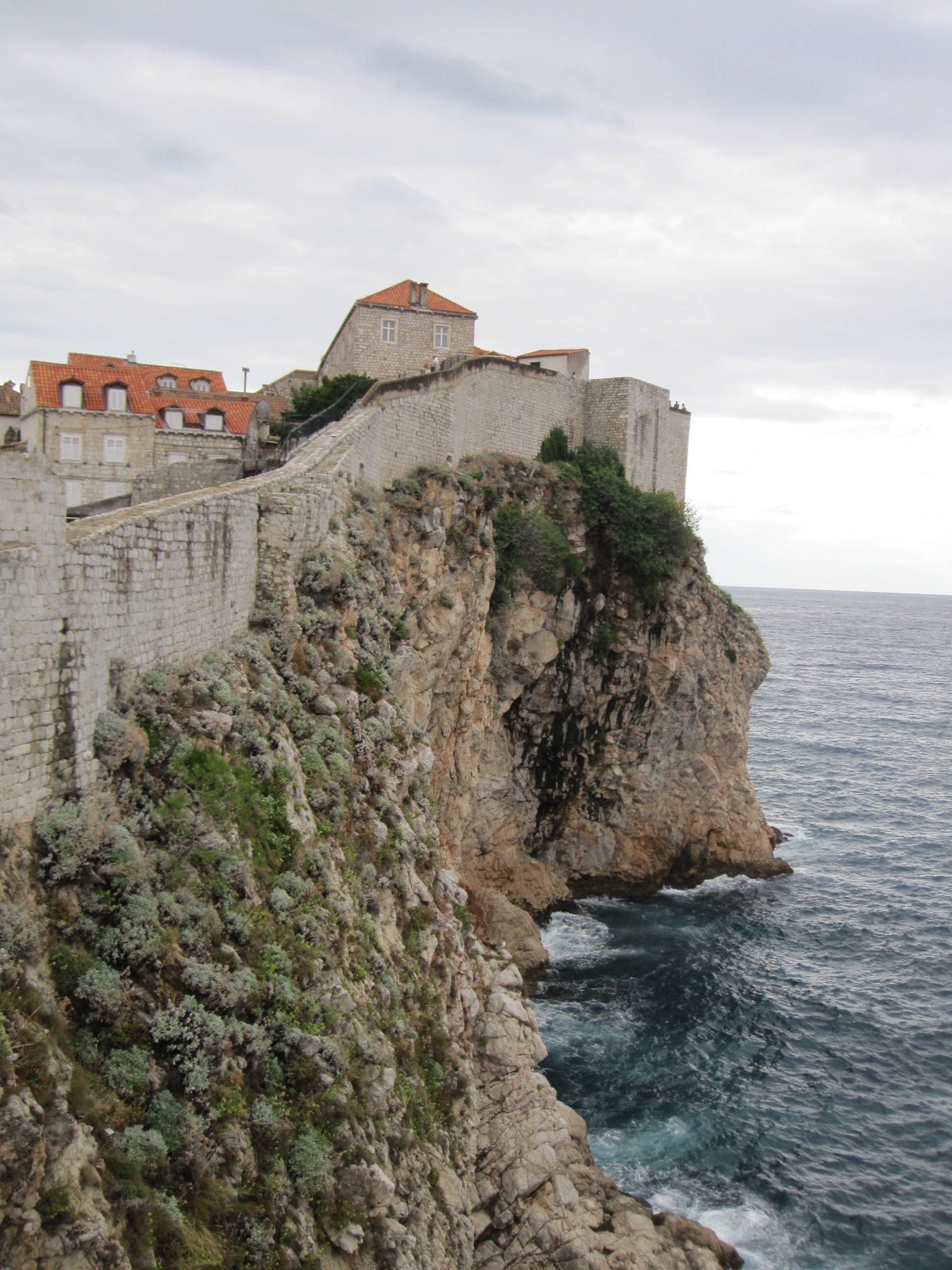