Colmar and Eguisheim: A Pair of Alsatian Gems

On the heels of our big Tour du Mont Blanc trek, then our “relax and recuperate” weekend in Lausanne, Colmar was pegged as the “do very little, sit around a lot” stage for this leg of our fall trip. Sleep, read, catch up on the blog, watch some shows, maybe eat a vegetable. And Colmar set up perfectly as an ideal place to achieve such grand ambitions. 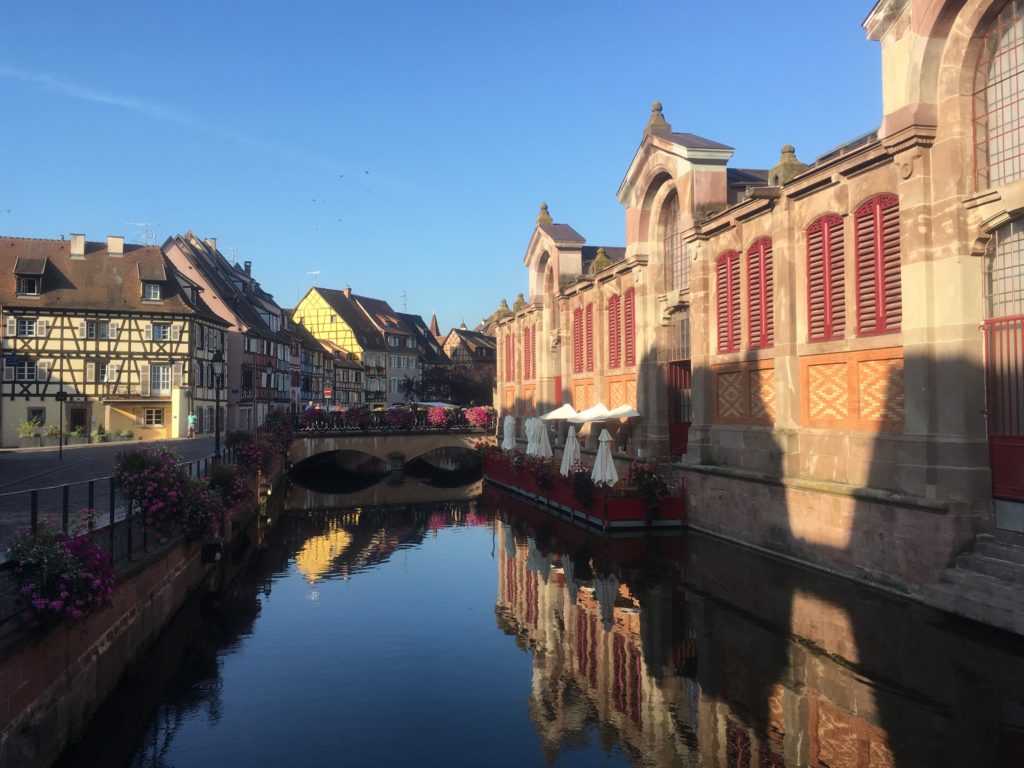 A beautiful little French city, Colmar had some similarities to other French towns we’ve visited such as Annecy and Toulouse, but as it is located in the Alsatian area they are all very German-influenced (possibly by the fact they are located practically on the German border), with colourful two-story wooden homes and the practically obligatory narrow, winding alleys. Its old town area has an amazing medieval feel and, while it only has a few small canals, those feel like plenty with another incredible photo op around every corner. We visited in the nice shoulder season of September but Colmar is also famous as one of the prettiest Christmas destinations in Europe. 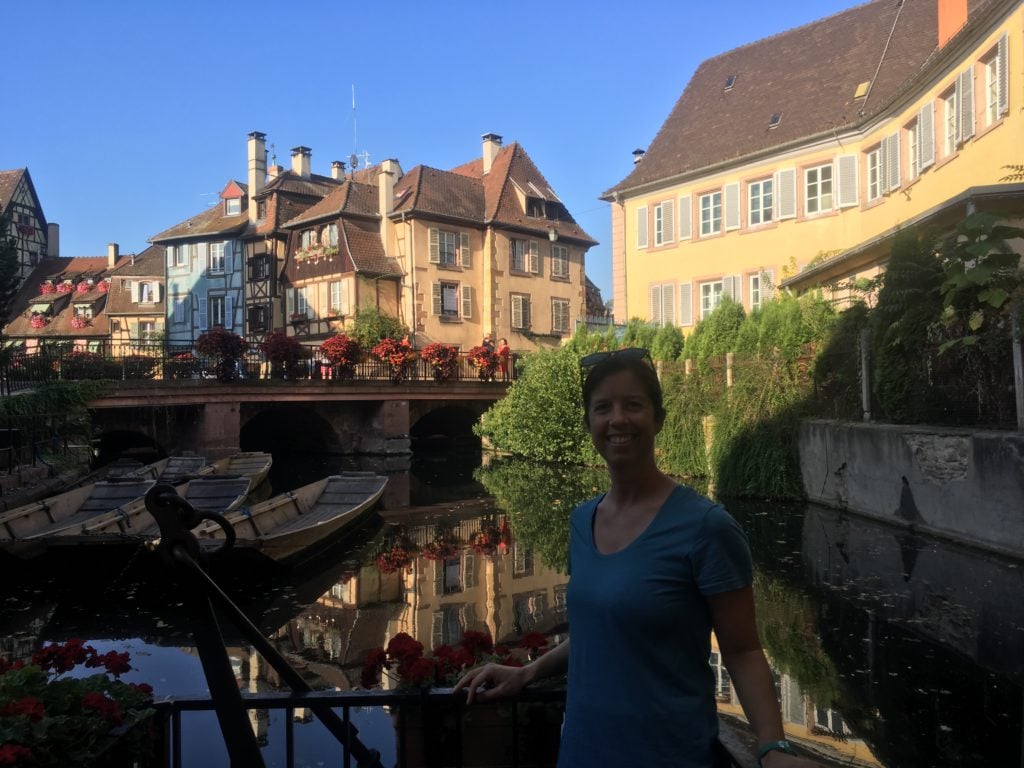 Oh, wait, I almost forgot. Basel! As much as that feels like it should be a Swiss slang term for canine excrement, especially if you yell it really loud, I don’t actually think it is. We stopped off for a few hours in this interesting Swiss city tucked away in the corner of the country bordering both Germany and France. It is included in most recommended Switzerland travel itineraries and even features a tiny island in the middle of the Rhine river where you can actually stand in all three at once. Not sure how this works, exactly, since I have just two feet and all, but I guess you could work something out “Twister”-style. Nonetheless, it turned out this unique geographical highlight was a pretty long walk up the river from where we were at the time so, you know, we didn’t bother. But I still like the idea of it. 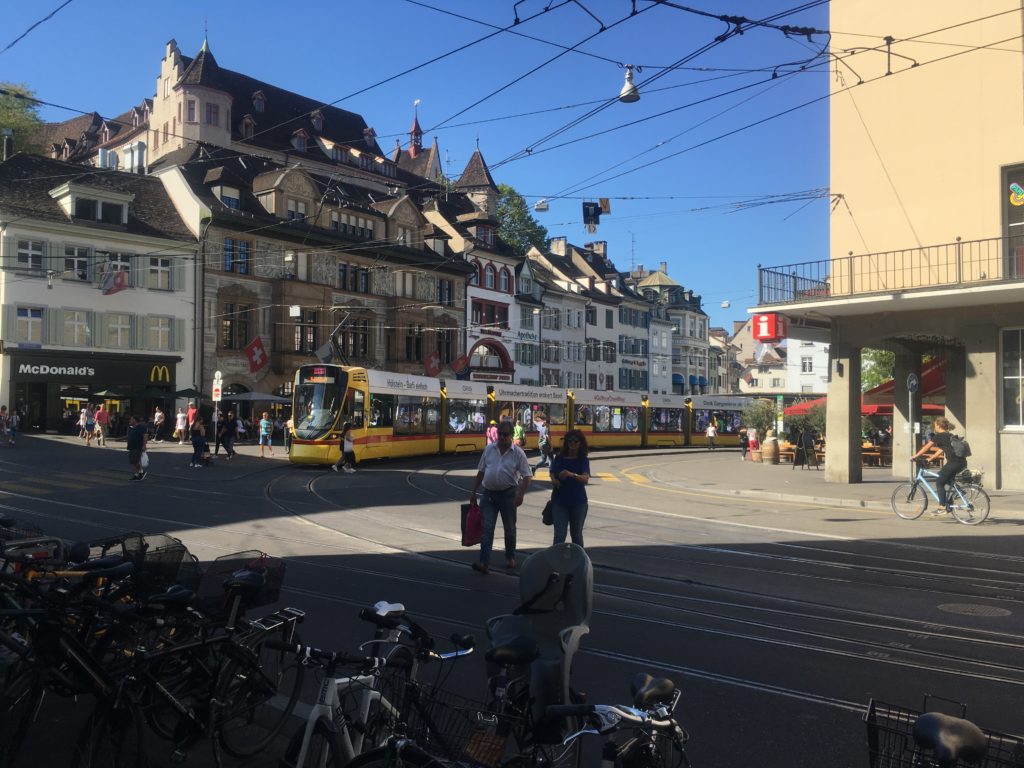 Anyway, as for Basel itself, rather than plan a day trip back from Colmar later on (about an hour by bus), we decided to drop our bags in a locker at the train station and have a look around before heading back into France. And what a day we picked. It was 27 or 28C, Sunday, and a national holiday to boot – the “Federal Day of Thanksgiving, Repentance and Prayer”. We didn’t see much of those last two things, but everyone did seem pretty thankful about the weather and very excited to take their shirts off. Plus, there were thousands of people biking around the city on roads partially closed specifically for that purpose and the banks of the Rhine were absolutely packed with pale Swiss sun worshippers soaking up what could easily turn out to be the last true summer weather for 2019. There were even hundreds taking part in an apparently popular Baselian (?) pastime of using inflatable dry bags called Wickelfisch to float down the river. In some of the busier sections it looked like the aftermath of a Caribbean cruise ship disaster, albeit with strangely happy castaways and no survivor battles over random flotsam. So, we spent a couple hours wandering around, completely overdressed in our long pants/long-sleeve shirt train/bus wardrobes, admiring the old wooden German buildings, picturesque French bridges and emblematic Swiss complexions, then some Italian ice cream, I enthusiastically urinated in a humorously-signed open public urinal on the busy river path, then we scurried back to catch our bus (wasting over an hour of that gorgeous afternoon sitting on the pavement in a parking lot using a bike rack as a back rest…) 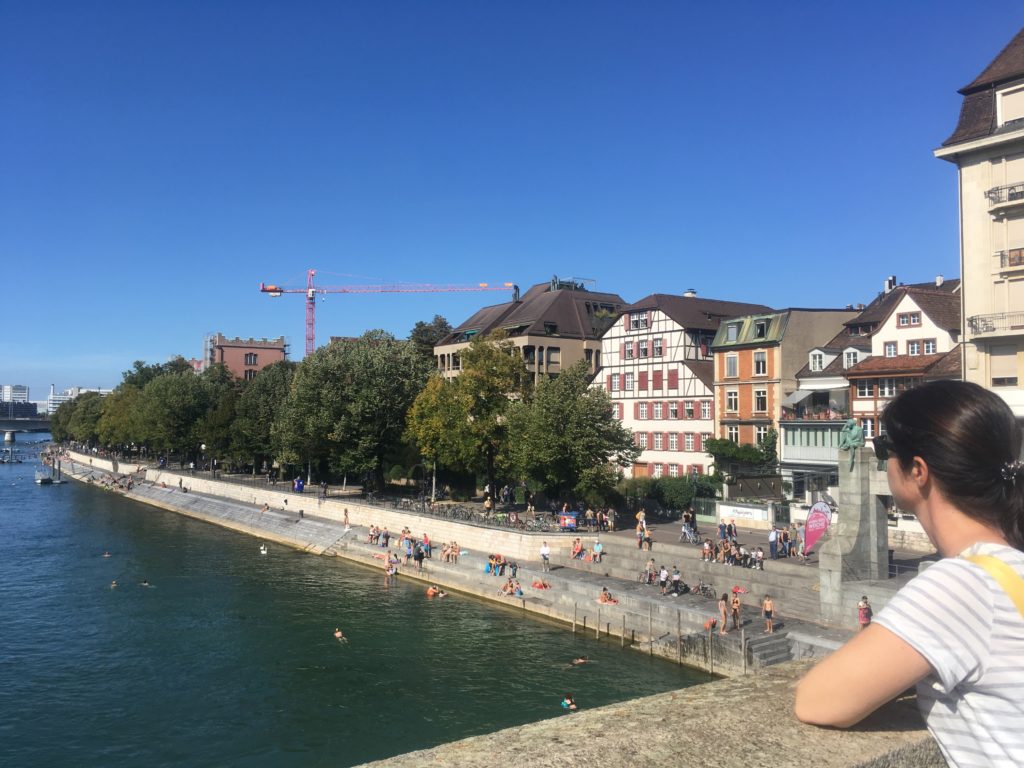 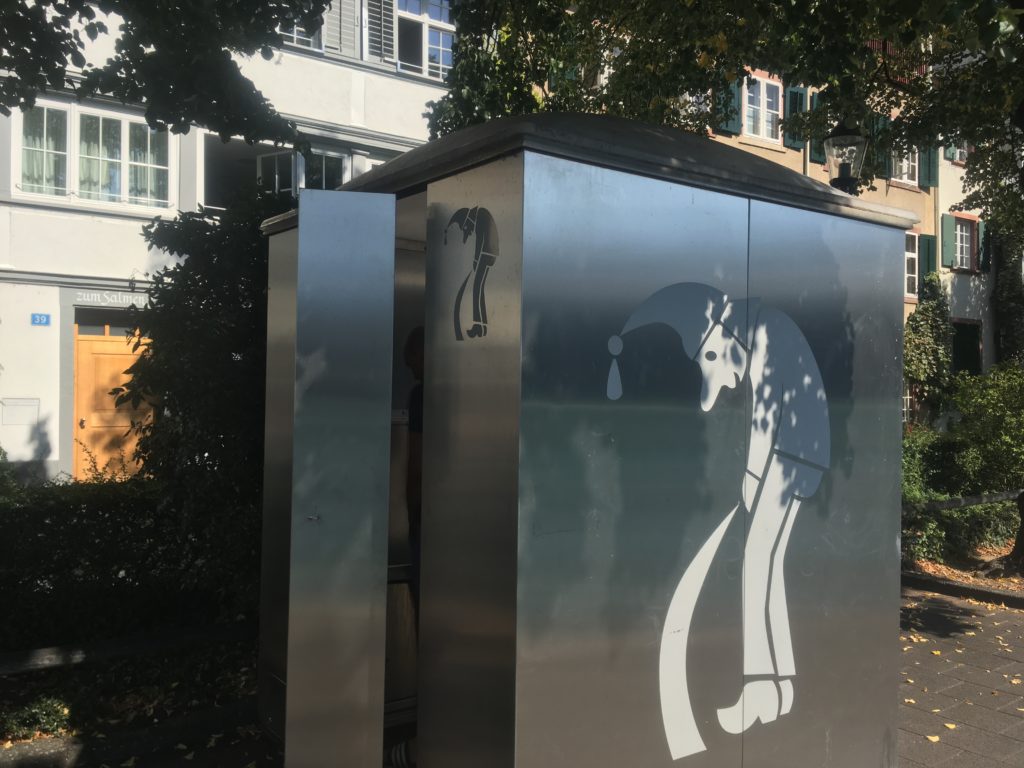 In Colmar, on the other hand, we simply relaxed, and did some wandering, lots of wandering (definitely the best thing to do in Colmar), in fact, (the new gel in-soles I picked up at the local supermarket have potentially added months to the life of my old sneakers) and, well, that’s all that really comes to mind. Oh, and our bike trip, one of the best day trips from Colmar. We rented bikes one day (stylin’ cruisers with baskets for both practicality and trendiness) and cycled out to a nearby place called Eguisheim, a tiny medieval village almost too quaint to be believed. Both Colmar and Eguishem are main stops on every popular Alsace bike tour. Eguishem even claims to be the inspiration for the town in The Beauty and the Beast (although it seems several other villages in the Alsace region also make that claim). I also can’t say I remember a kitschy little train full of photo-snapping tourists featuring in the movie, but it’s been awhile, so… We also passed through quiet, charming, little Wettolsheim and, overall, the whole journey was a nice, flat ride along rural country paths through the trees, along a creek, and past burgeoning corn fields and vineyards full of ripe grapes, and somehow we only got lost the one time. 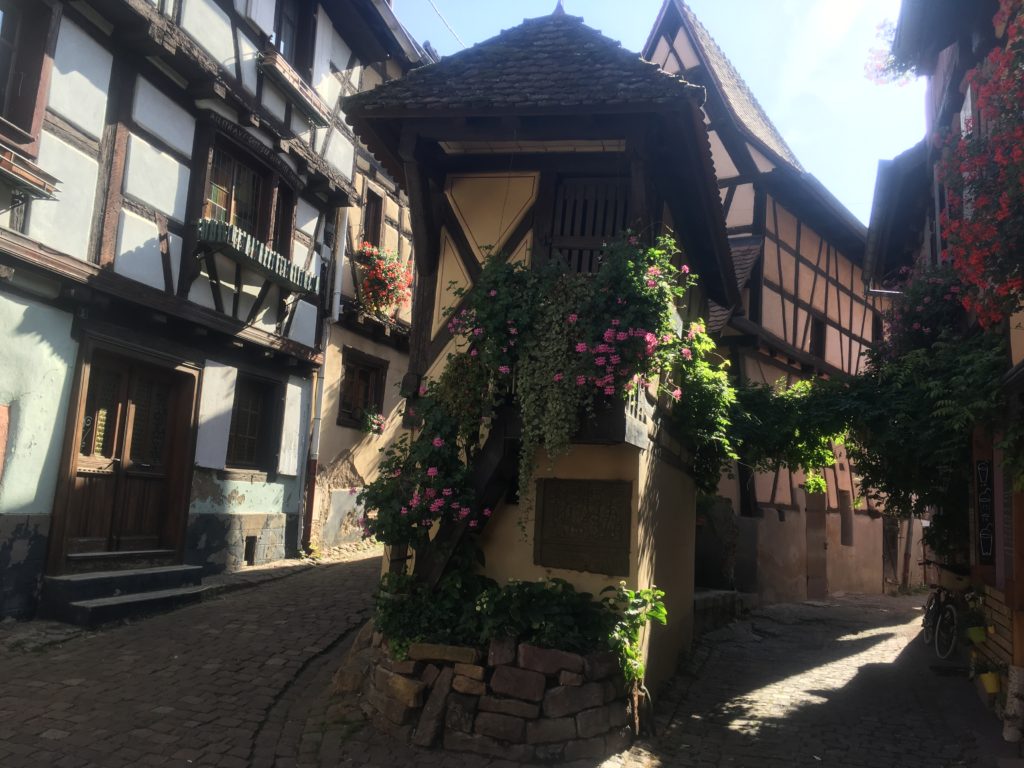 Besides that single wild foray, we revelled in a privacy we hadn’t known since we were in Paris before the start of the TMB hike, so much so that Laynni almost forgot she needed to put on pants before Facetiming her family back home. We stocked up on groceries, sorted photos, wrote and worked on the website, with maybe even the occasional nap squeezed in for good measure. 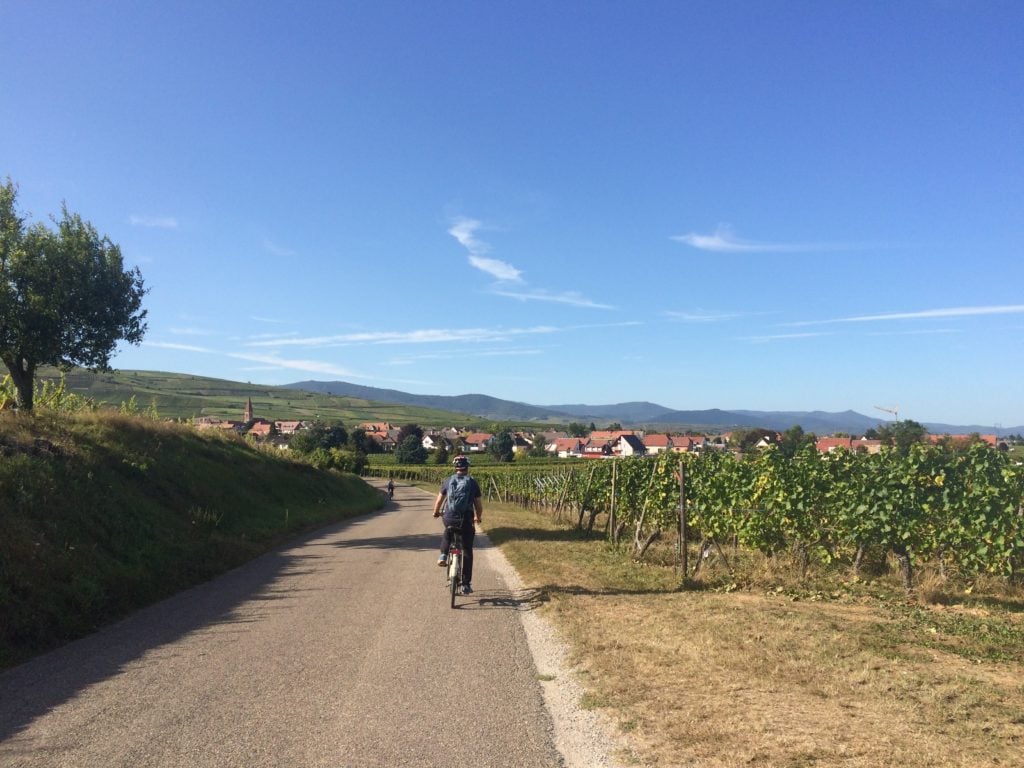 Colmar’s main attraction is its extraordinarily charming old town and, specifically, “Le Petit Venice” (not to be mistaken for “La Petite Venise”, confusingly, a restaurant in “Le Petit Venice”). And, for the most part, the photos tell the story better than I ever could. Sure, they can’t tell you about the time that huge swan tried to snatch the phone right out of that Asian girl’s hand – repeatedly, because this chick was not giving up on a great closeup – and the photos mostly can’t tell this story because we thought it was hilarious and forgot to take a photo. But for everything else, the photos should basically cover it. 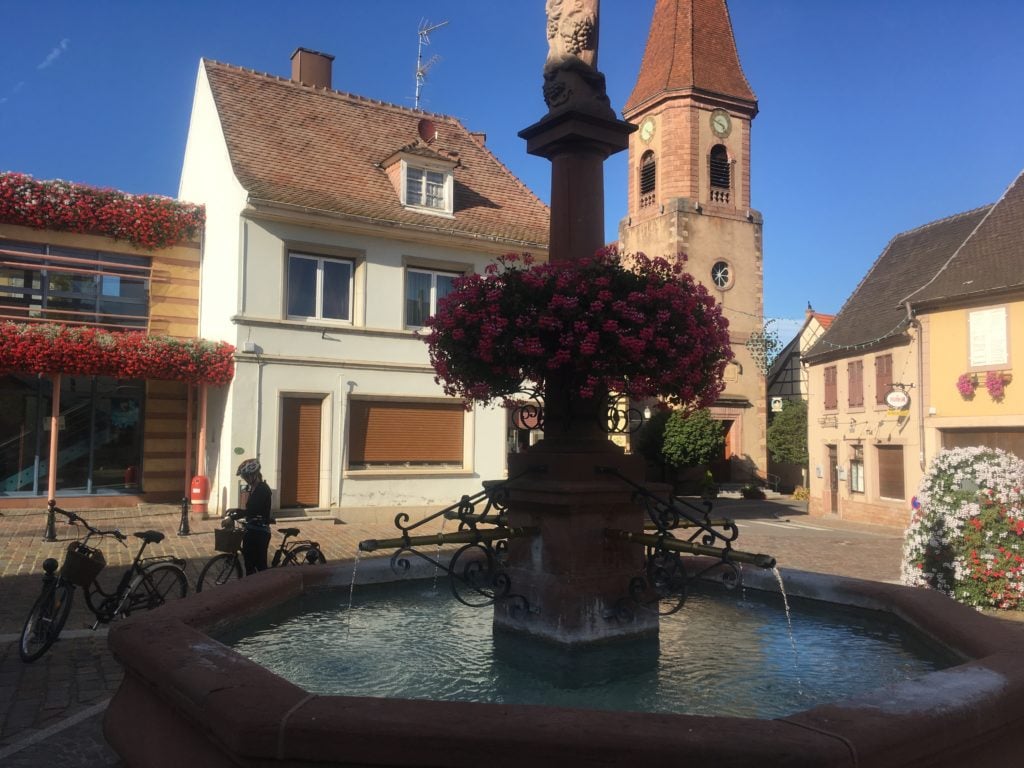 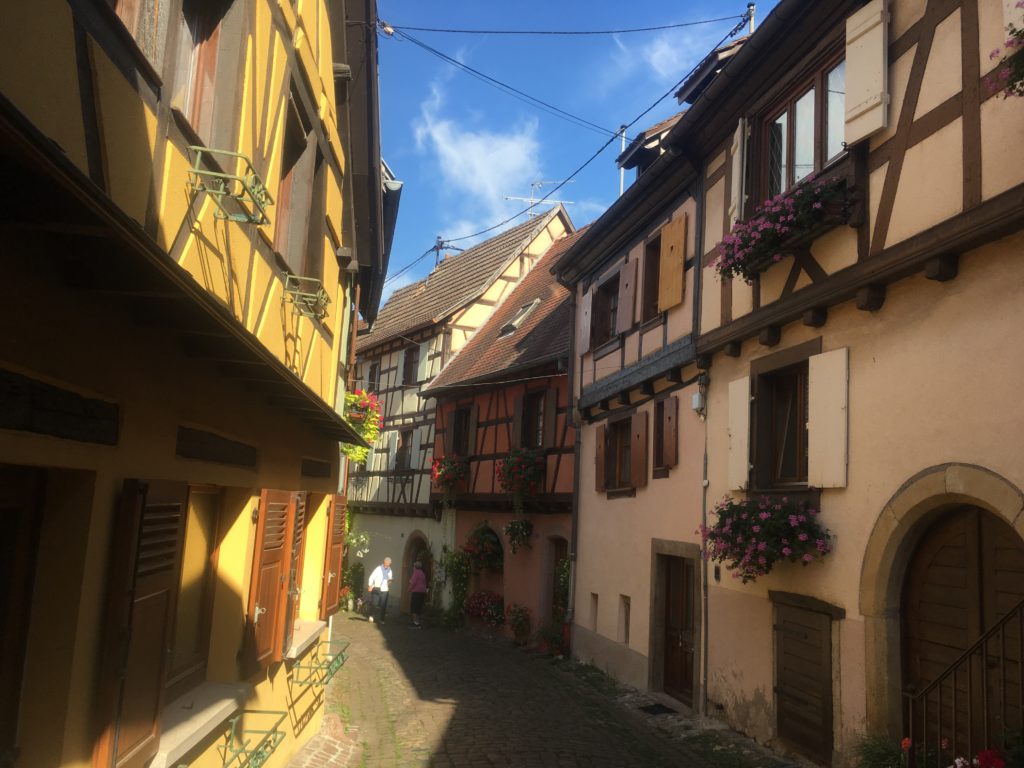 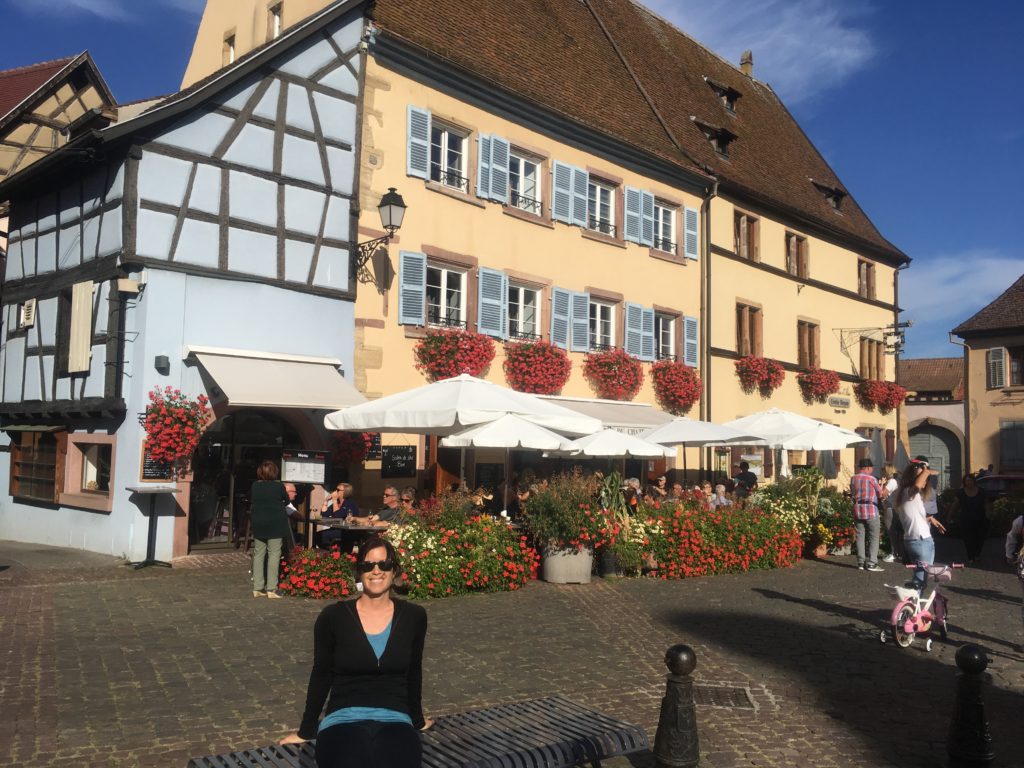 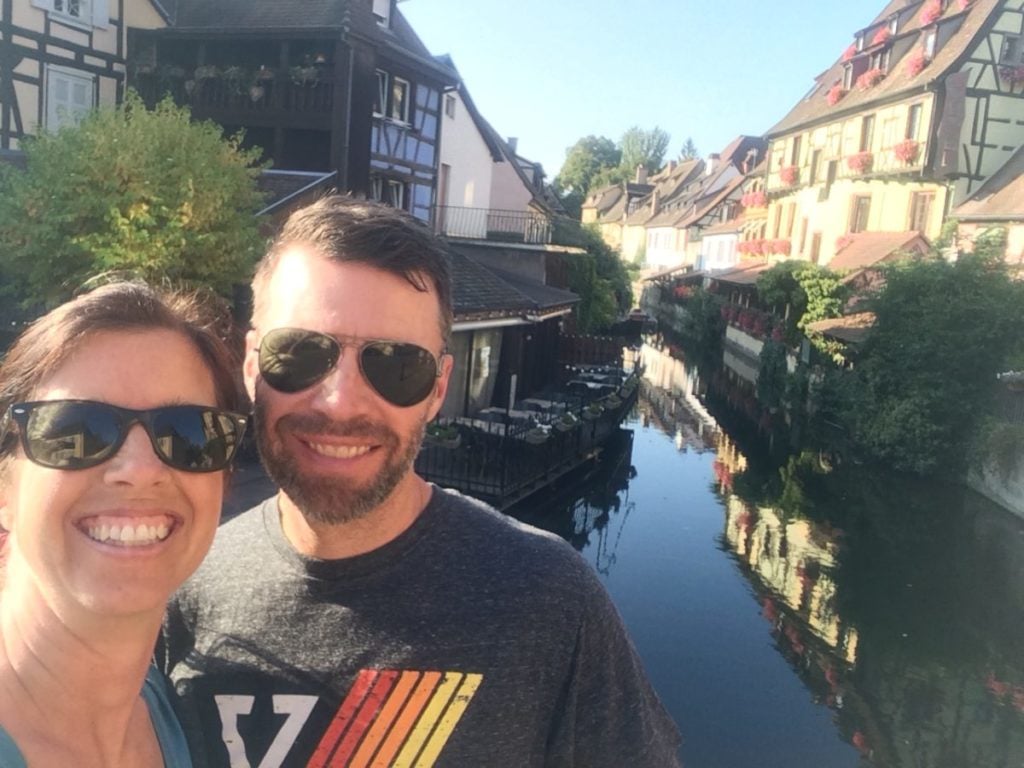 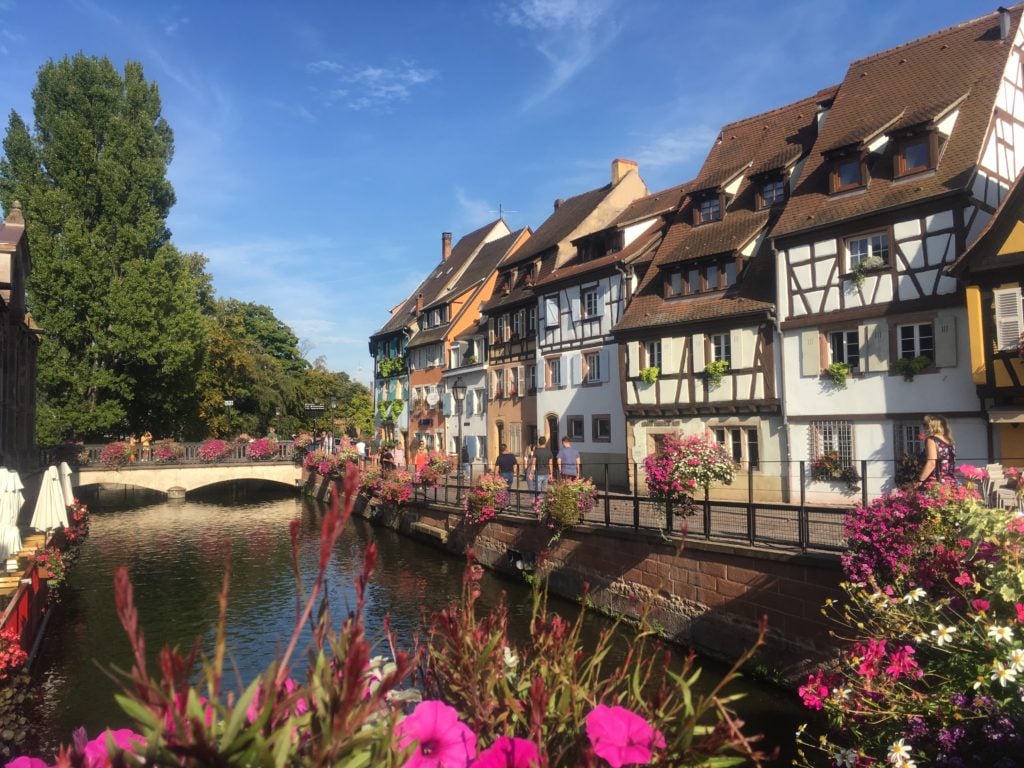 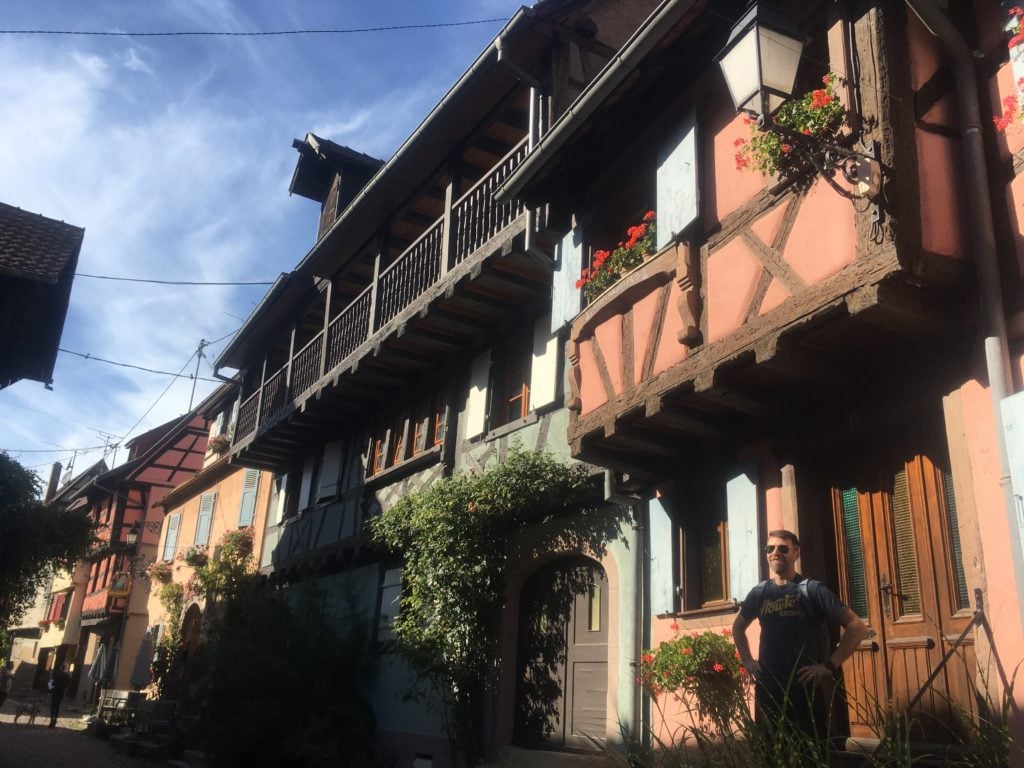 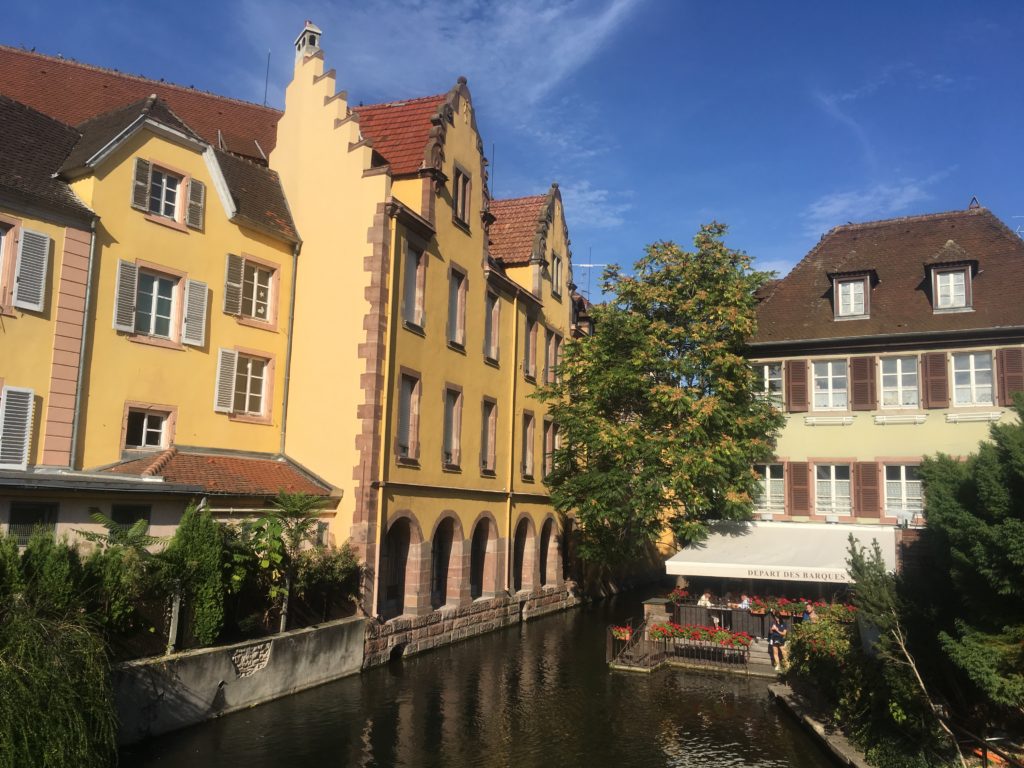 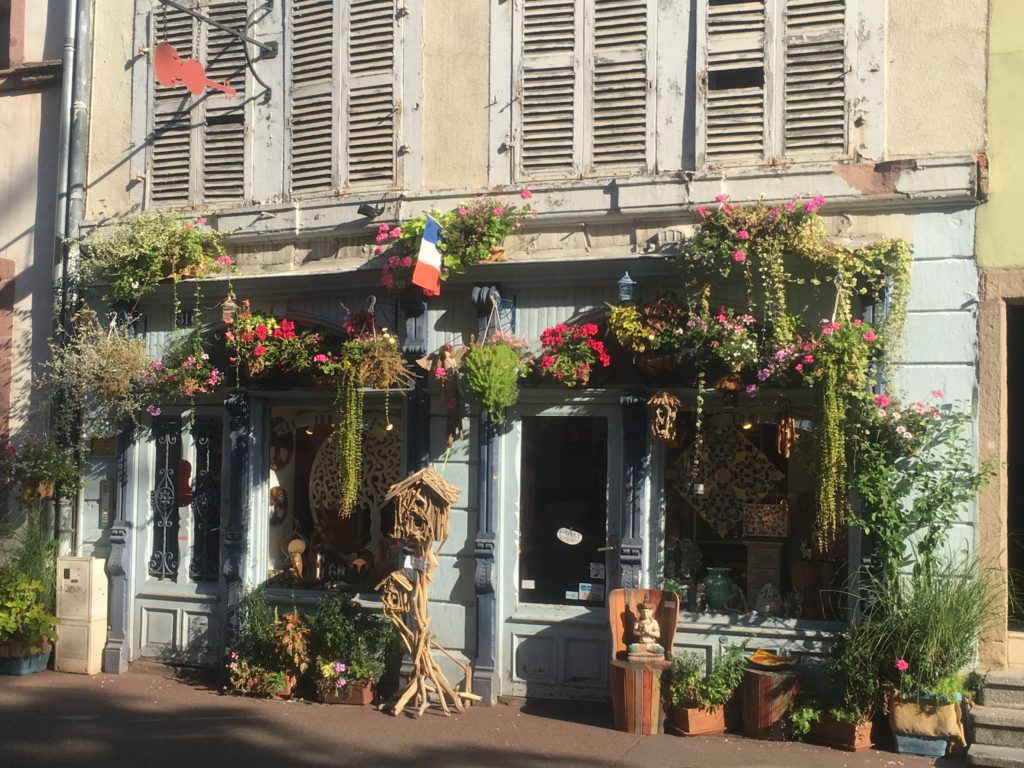 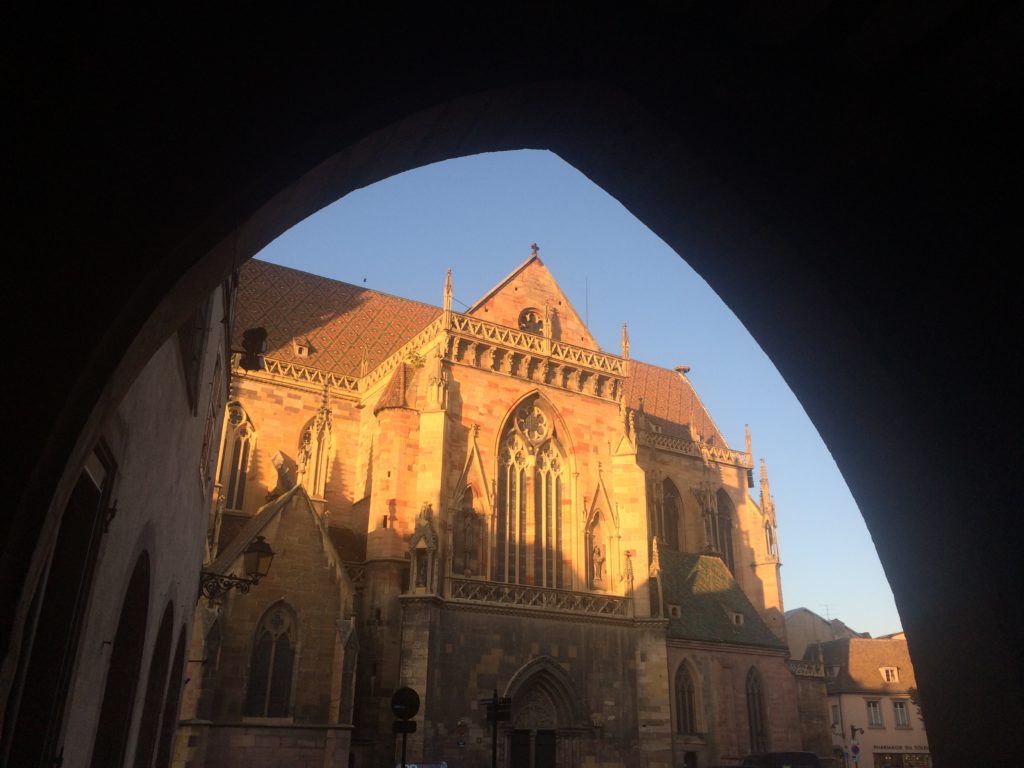 The creator of the Statue of Liberty, Auguste Bartholdi, was from Colmar. His original idea was to build a massive lighthouse in the shape of a woman holding a torch that would be located at the mouth of the Egyptian Nile to commemorate the opening of the Suez Canal in 1869. However, this idea was discarded as far too expensive (plus, I also wonder about the fact that there are plenty of large statues in the Middle East but precious few of those are of women). Anyway, after he moved to the United States he ended up drumming up the funding he needed and the rest is history. Meanwhile, in Colmar a 12-metre high replica has been built in Bartholdi’s honour, then oddly placed in the middle of a busy freeway that is almost impossible to reach safely on foot. Nonetheless, there is a scenic walking route past all the best places in Colmar marked by small, triangular, metal markers featuring Lady Liberty’s likeness. The markers themselves are interesting, take you to all top attractions in Colmar and, at the very least, can lend some structure to your meandering. 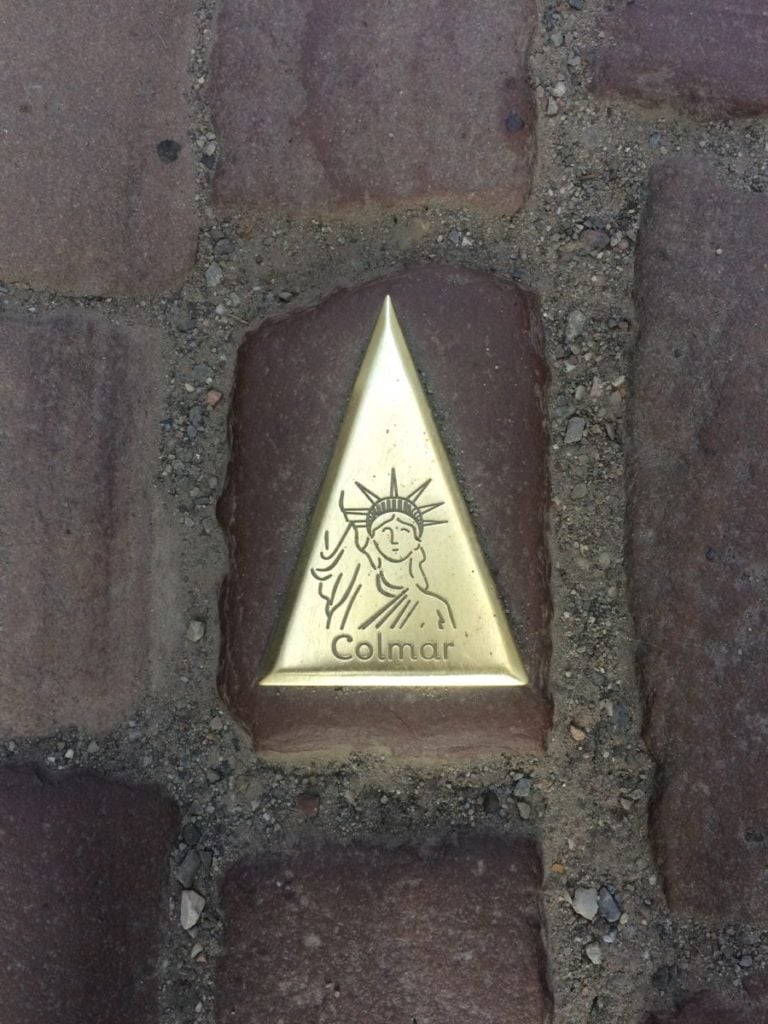 Having spent only a few hours in Basel we can only tell you a couple things: there is a left luggage at the train station where you can rent a locker (from 7E to 10E depending on size) for up to 5 hours to tour the city unencumbered by unnecessary weight such as hiking shoes, toothpaste and emergency band-aid supplies. Buses to the airport and Colmar are frequent and cheap (we paid just 5E each on FlixBus). The international airport is partway between the two and has connections all over Europe (maybe why it so grandly calls itself “EuroAirport”). 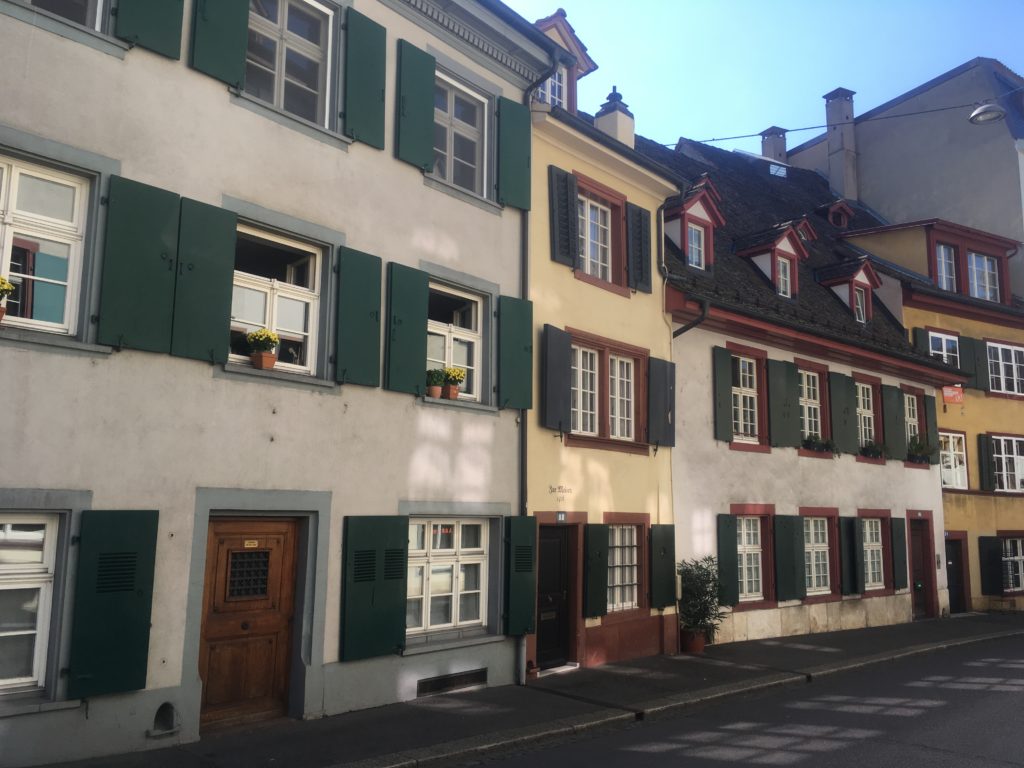 Even though Colmar could hardly be described as a budget destination, after the “problematic” prices of Switzerland, it felt like a pretty amazing deal. We found a really nice AirBnB right in the old town for about 65E/night, with a bakery basically downstairs and a square around the corner, and there also many options on Booking.

The restaurants weren’t so expensive (10-15E for most meals), especially if you chose one that wasn’t directly on a canal or plaza. And there is a wide range of shops to choose from if you want to self-cater. The aforementioned bakery was just one of many, along with grocery stores (large and small) and plenty of specialty places to pick up cheese, meat, wine, etc. 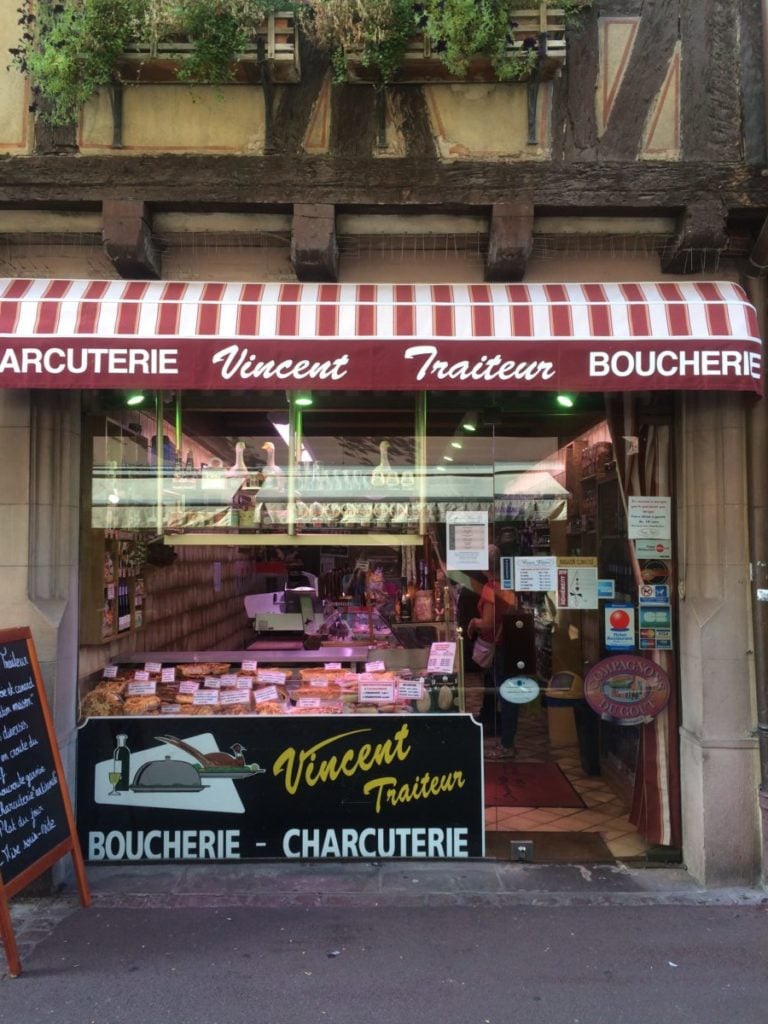 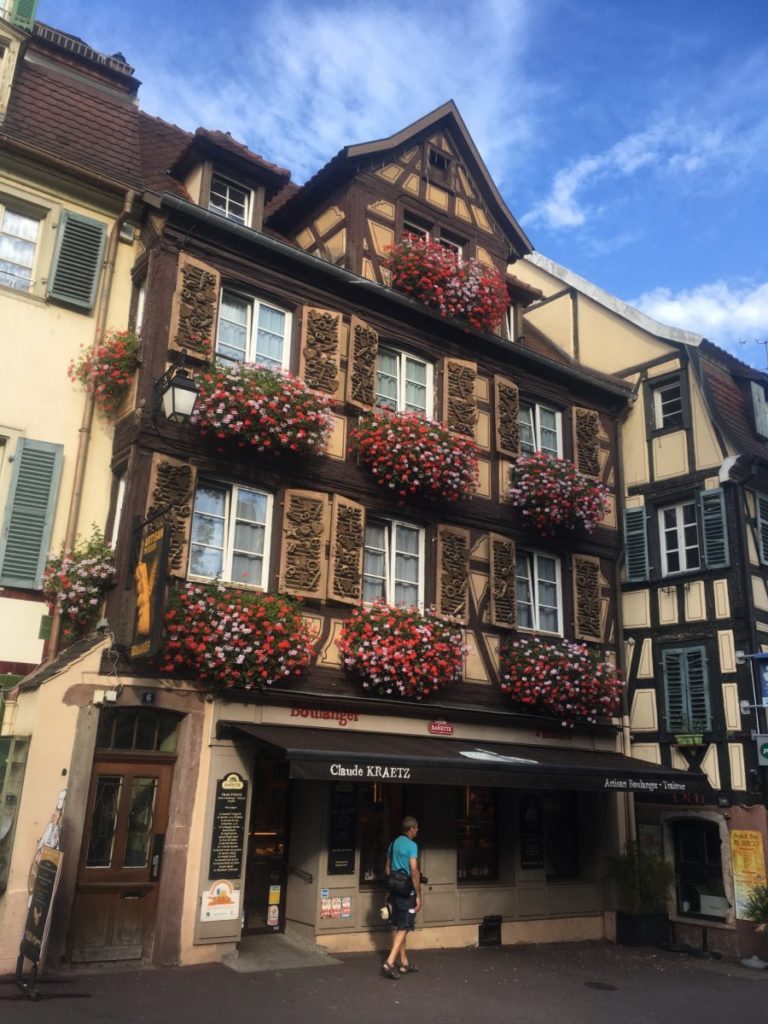 We only paid 8E each to rent a bike for a half-day from Colmar Cycling – Velodocteurs for our day trip to Eguisheim. We picked it up at 2 pm and had to return it by 7. Incidentally, they are closed from 12 to 2 and there were a lot of people there right at 2, so you may want to get there first or try in the morning instead. 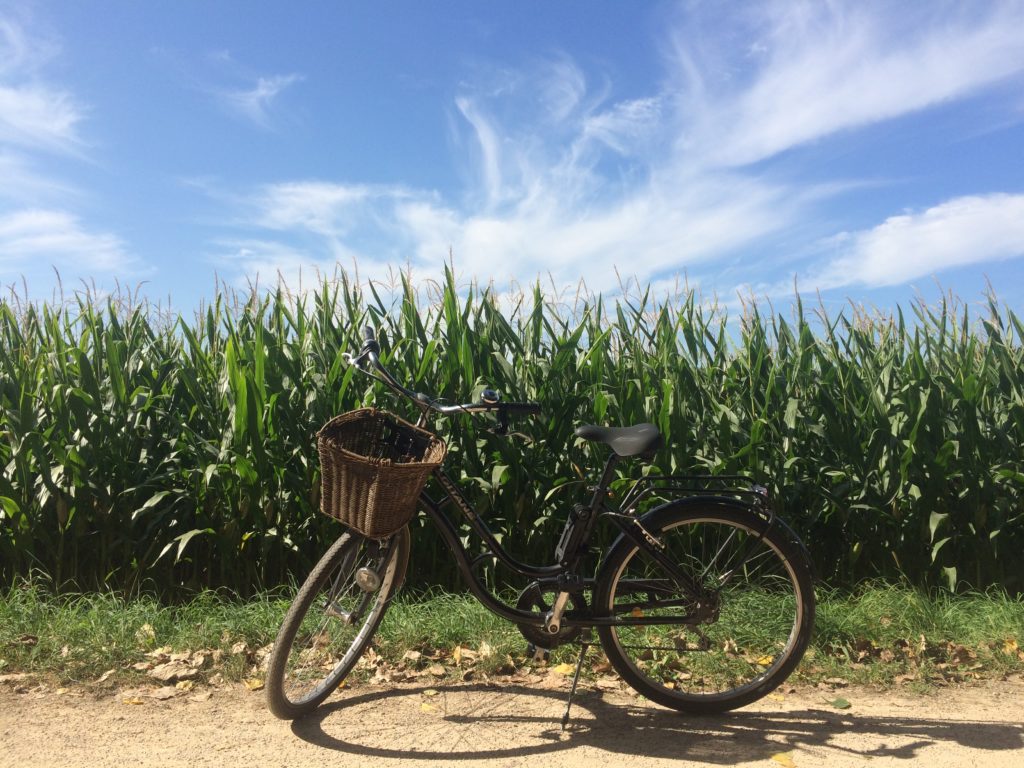 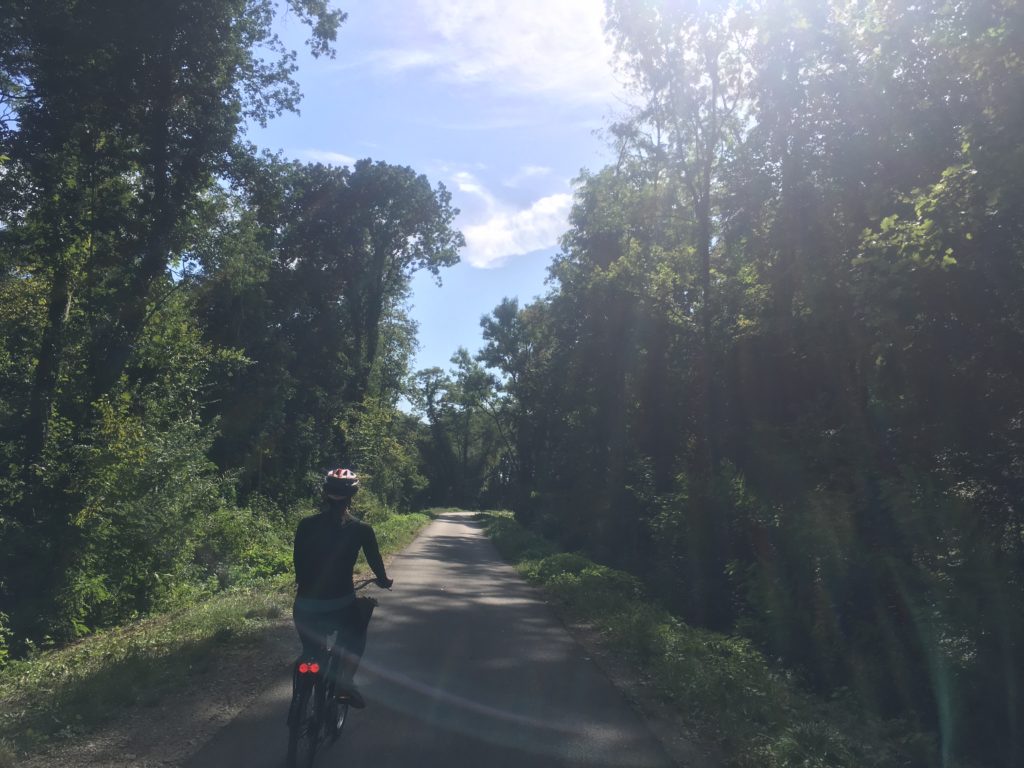