After Skoura we made our way up the road to the Dades Gorge, one of the three most important gorges, in my opinion, along with the nearby Todra Gorge, which we had visited back in 2004, and the immortal Gorge “The Animal” Steele. We sat jammed into a large share taxi/van for the spectacular 27 kilometre trip up the gorge to Chez Pierre, watching in fascination as the walls alternately widened and narrowed, repeatedly changed colours like an old lady’s hair in the sun and contrasted starkly with the lush green palmeraies surrounding the meagre trickle of water running down the centre optimistically referred to as a river. The gorge had a number of things going for it – great views, a quiet rural atmosphere, amusing little log bridges, women herding donkeys overloaded with branches three times their length – and just one serious downside. Soooo cold. I mean, not Saskatchewan in winter cold, or even cold like a piano teacher after you refer to pianos and organs as “more or less the same thing”, but cold enough when the wind kicks up, the room heater demonstrates a range roughly equivalent to the length of a juvenile raccoon, and the windows prove less airtight than a cereal box with the cardboard flap closed. 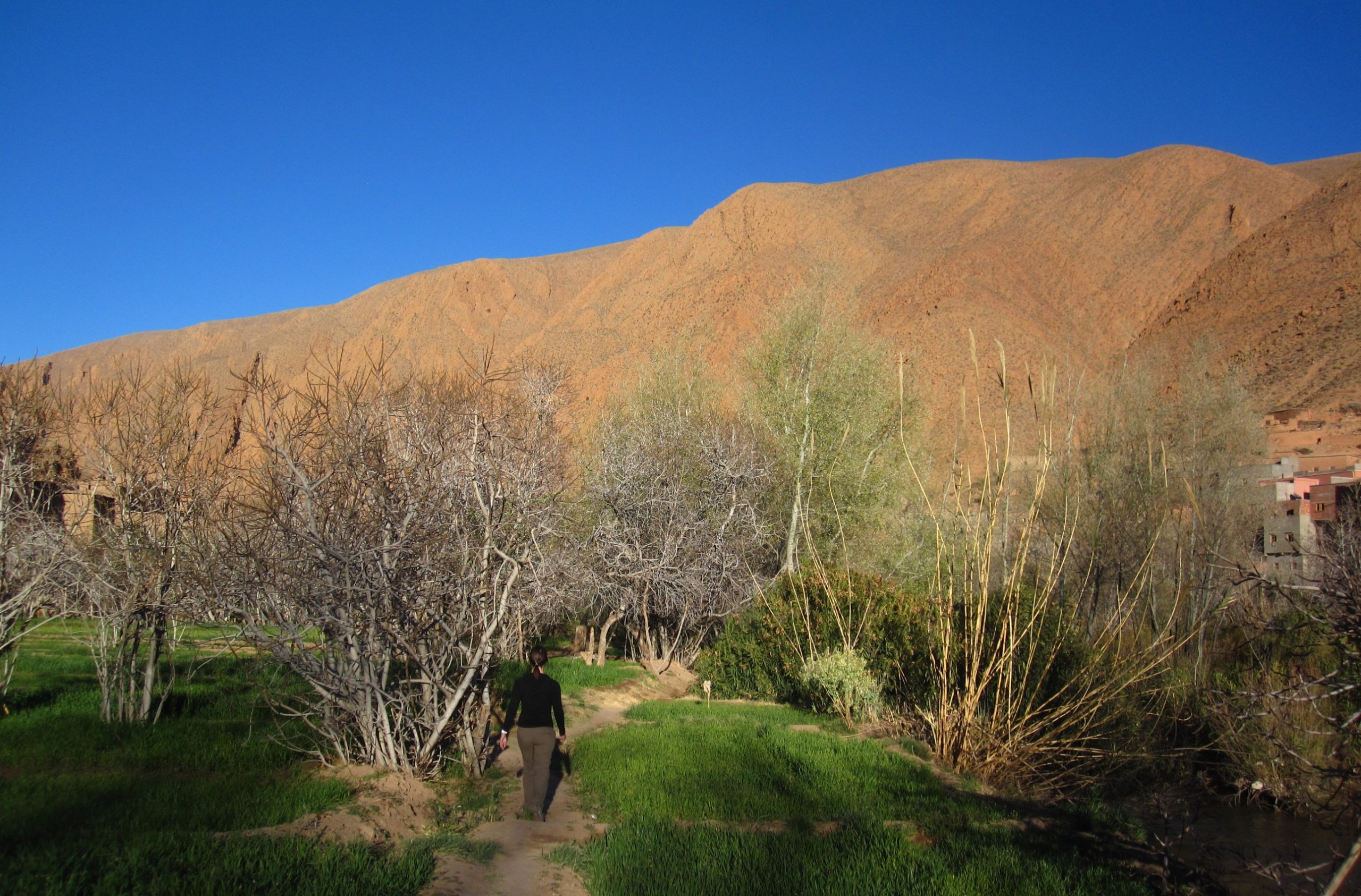 On the other hand, the fact the pool only had a foot and a half of cruddy sludge in the bottom ended up being a far less crucial shortcoming than we originally thought it might. Despite the chilly nights (and mornings, and evenings, and late afternoons) our time spent out hiking in the gorge under the brief midday sun was every bit as exhilarating and picturesque as we had hoped. Enough to convince us to stay an extra night, although not quite enough for us to add it to our list of “Best Rocky Canyons of the 21st Century”. We did an awesome two hour hike down a side gorge in an area affectionately referred to as “The Monkey Fingers”, presumably because the strangely rounded and clustered rock formations resemble a monkey’s wizened little hand when all bunched up in a wrinkly fist in preparation for bareknuckle extravaganza with a cocky orangutan, and it was one of the coolest and most challenging short hikes we ‘ve done in ages (at least since the three hours we spent trying to spot a Moroccan man in jeans that weren’t acid washed). Following a tiny dirt path through the palm trees and small gardens alongside the river, then up into a hidden gorge, scrambling over and around jumbles of rocks, sometimes even having to crawl under giant boulders fallen and jammed into the narrow ravines like giant ball gags keeping the naughty canyon in check. Eventually it just got narrower and narrower until we couldn’t go any further, only giving up and turning around when I noticed that my wallet and penis were simultaneously touching opposite walls. 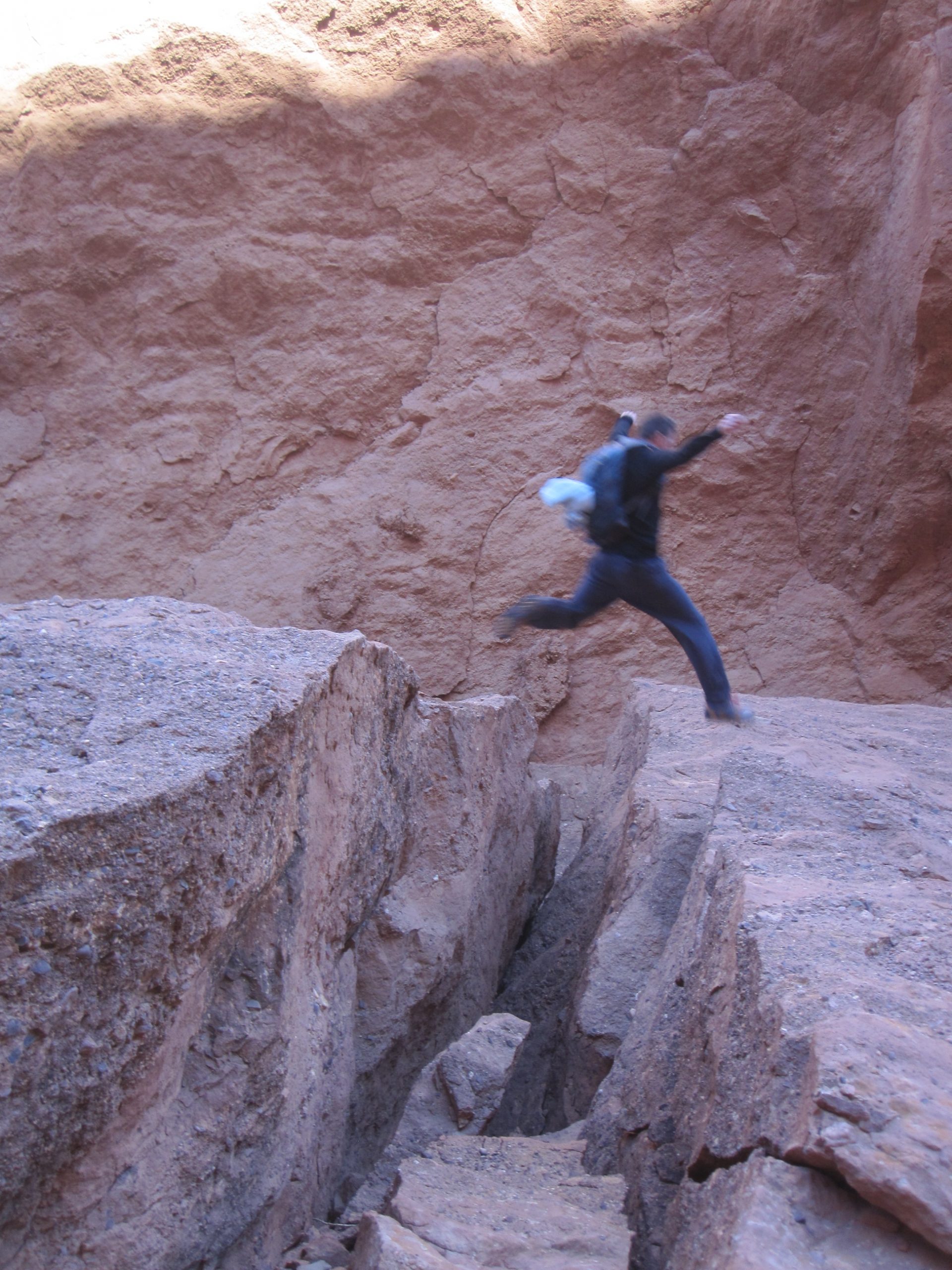 But after just a short stretch of backtracking we discovered an alternate route, one that involved working our way up some currently dry waterfalls with the help of just a precariously childish set of rock steps and a mutual distaste for returning the way we came. Fifteen minutes and several false starts later we emerged from the canyon onto an open ridge with stunning views of the valley, gorge, nearby villages and distant snow-capped Atlas Mountains, including a great look at Mount Toubkal, one of the most popular mountains to climb in all of Morocco. I peed triumphantly high into the air, then we followed the path down to the village and had some lunch.

Transportation in the gorge is mainly by share taxi and random hitchhiking and follows no predictable sequence or pattern, much like closing time on Broadway. Which is how, on our way out, we found ourselves squished like sardines into the very back of a ramshackle minivan packed to bursting with stout old Muslim ladies clearly on their way to some epic Sunday gathering. Their captivation with us was immediate and intense, like my love of cave drawings, but unfortunately (or possibly fortunately) their French was every bit as negligible as ours, and we barely know a dozen words in Arabic, none of which proved helpful in explaining why two of them kept miming deep breaths into, or out of, a plastic bag. Nausea? Gasoline sniffing? A deep breathing contest? Either way, I’m pretty sure they were mostly speaking Berber (dropping our knowledge to a grand total of three words – hello, thank you and a special mood-lightening spit bubble). 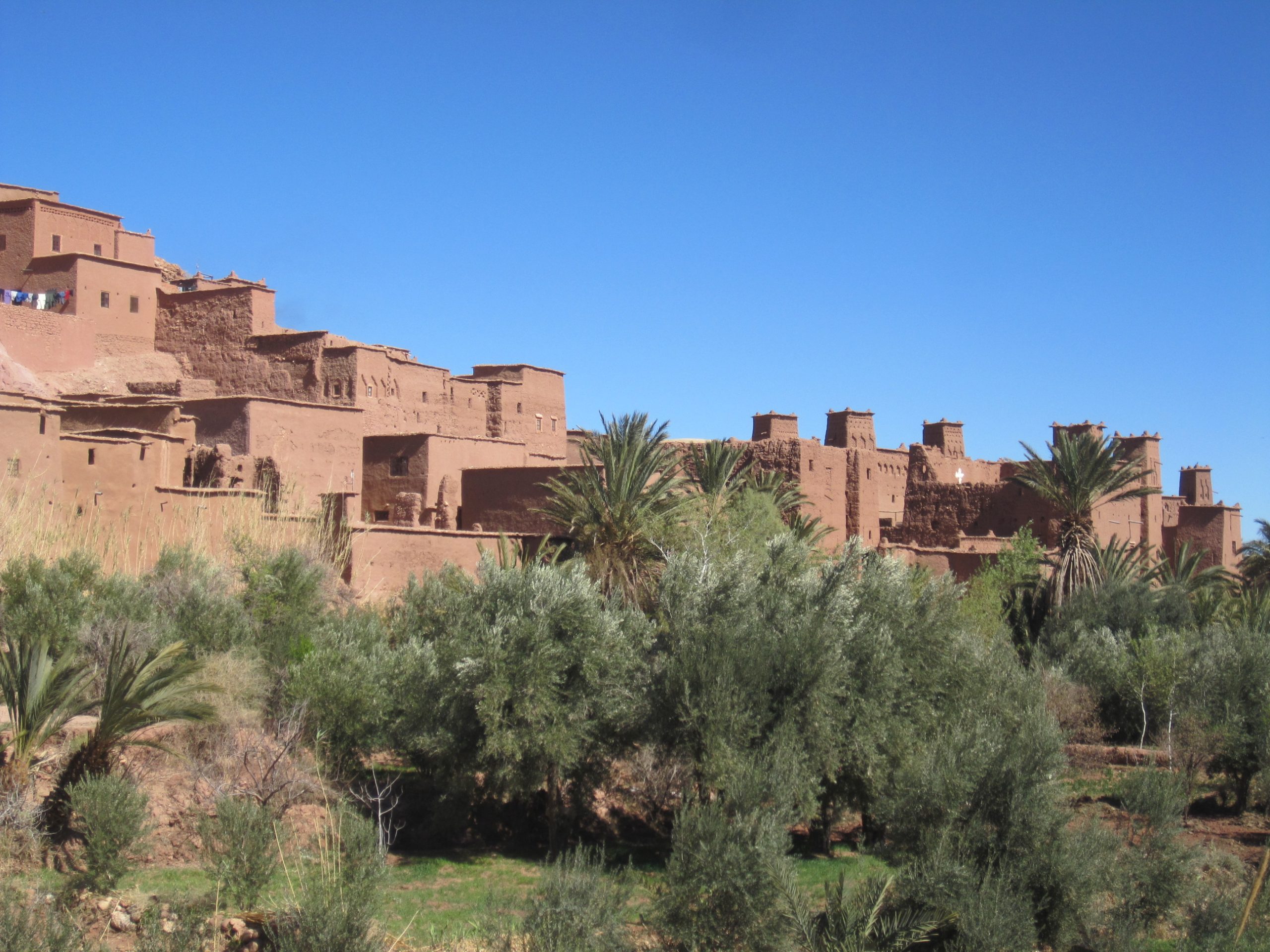 Whatever it was, though, they were speaking it fast, and passionately, and all at the same time, and right in our faces, and it seemed to mostly involve Laynni’s uncovered hair (in a fun way), her eyes (in a complimentary way), the lack of dark kohl around her eyes (in a helpful suggestion way) and me in general (in a we-can’t-believe-there-is-a-guy-in-our-midst-and-Fatima-is-actually-sitting-on-his-leg-surreptitiously-grinding-it-once-in-a-while-and-laughing-like-a-hyena-at-his-reaction-every-time kind of way). Considering that we often see full share taxis entirely rearranged just to keep men and women from sitting next to each other or even inadvertently bumping elbows or meeting each other’s shy gaze, that fifteen minute stretch of unusual gender comingling was easily as surprising as anything I have ever found growing on one of my toes.

After a night in Ouarzazate getting caught up on internet and warmth, we rented a car and drove out to the famous postcard village of Ait Benhaddou, one of the top places to see in Morocco, best known for the starring roles it played in such mud-brick-centric films as Lawrence of Arabia, Gladiator, Kingdom of Heaven and Prince of Persia (he added sheepishly). While we were there, though, the only filming was an inevitably failed attempt to use a small Canon camera to capture the sights, sounds, depth and feeling of a haunting ancient locale through the dubious use of 20 interminable seconds of slow, shaky panning. 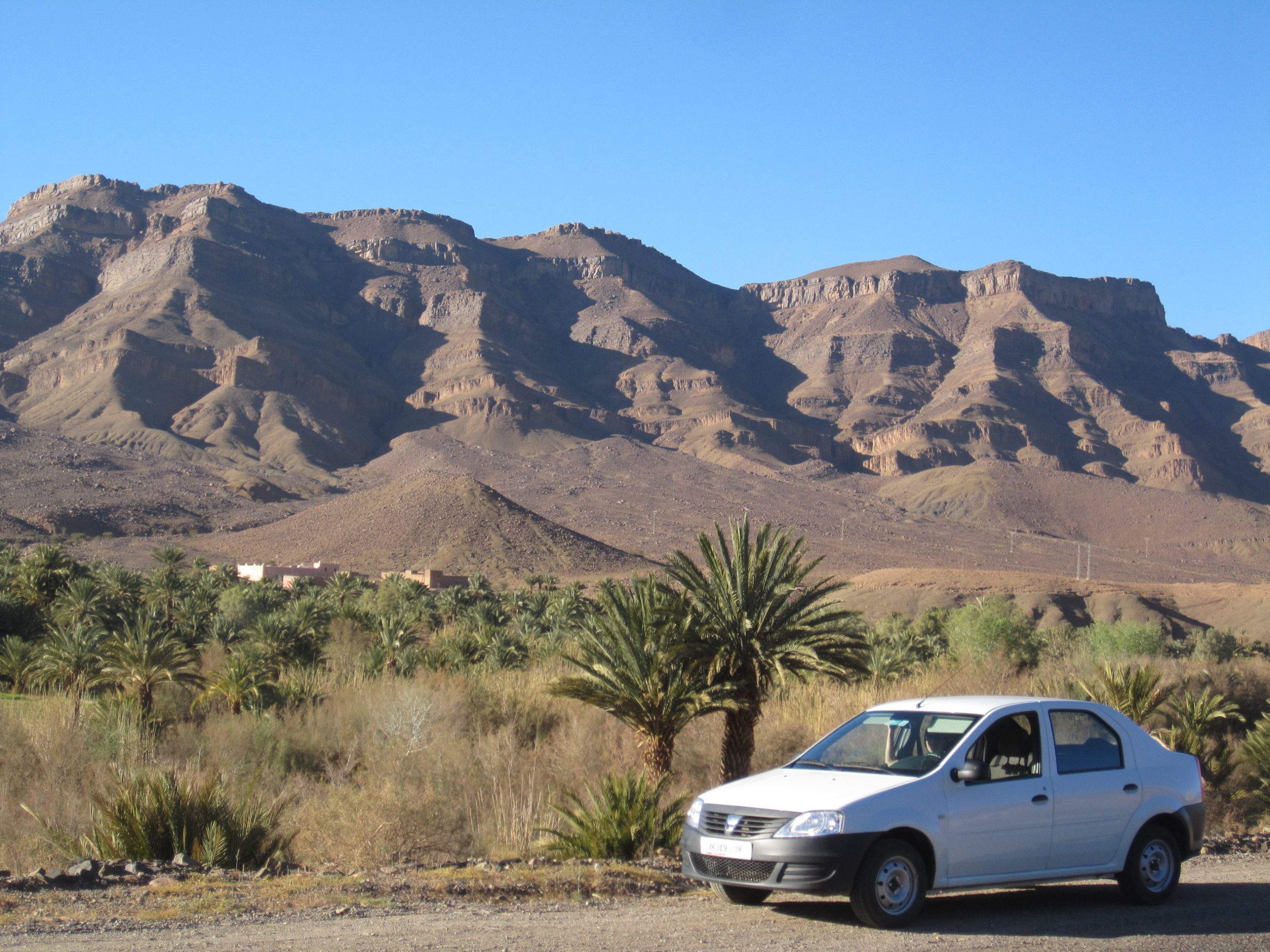 One of these days I’ll figure it out. After we’d had our fill of movie history we dodged the touts on the way out and headed southeast to the famed Draa Valley, the ancient trader’s gateway to and from the bleak expanse of the Sahara. We took our time, enjoying the slow winding roads, the impressive views through the high passes, the opportunity to stop for pee breaks as often as we wanted, listening to surprising radio mix of French pop songs, epic Arabic wailings and old Alanis Morissette songs, eventually emerging on the other side to a view of the stunning expanse of the Draa Valley, a beautiful basin of verdant palm groves gently carved out of the dry, rocky plains around it like a limp asparagus on a bed of lumpy mashed potatoes, or a dead green snake. Today the valley remains much as it must have in the distant past – a string of small villages accessed via rough dusty “pistes” and populated by smiling, waving villagers working in and around mud brick houses and ancient restored kasbahs. The hotel we stayed at, Kasbah Timidarte, was a striking example of this, a 17th Century kasbah carefully and traditionally restored by a communal association and promoted as a way to bring tourist dollars into the village in a responsible way (meaning without the aid of large fuzzy mascots or commemorative ashtrays). For the record, I don’t see how my generous gifts of poorly accented but friendly “salaams” and commitment to eating at least a little bit of things I normally would hate could be construed as anything but helpful and enlightening.All in all, Timidarte was one of those refreshing type of places where just when we started to wonder if we were actually in the right dusty village the road simply ended and before we could turn around the woman idly relaxing on a nearby bench waved us over nonchalantly. 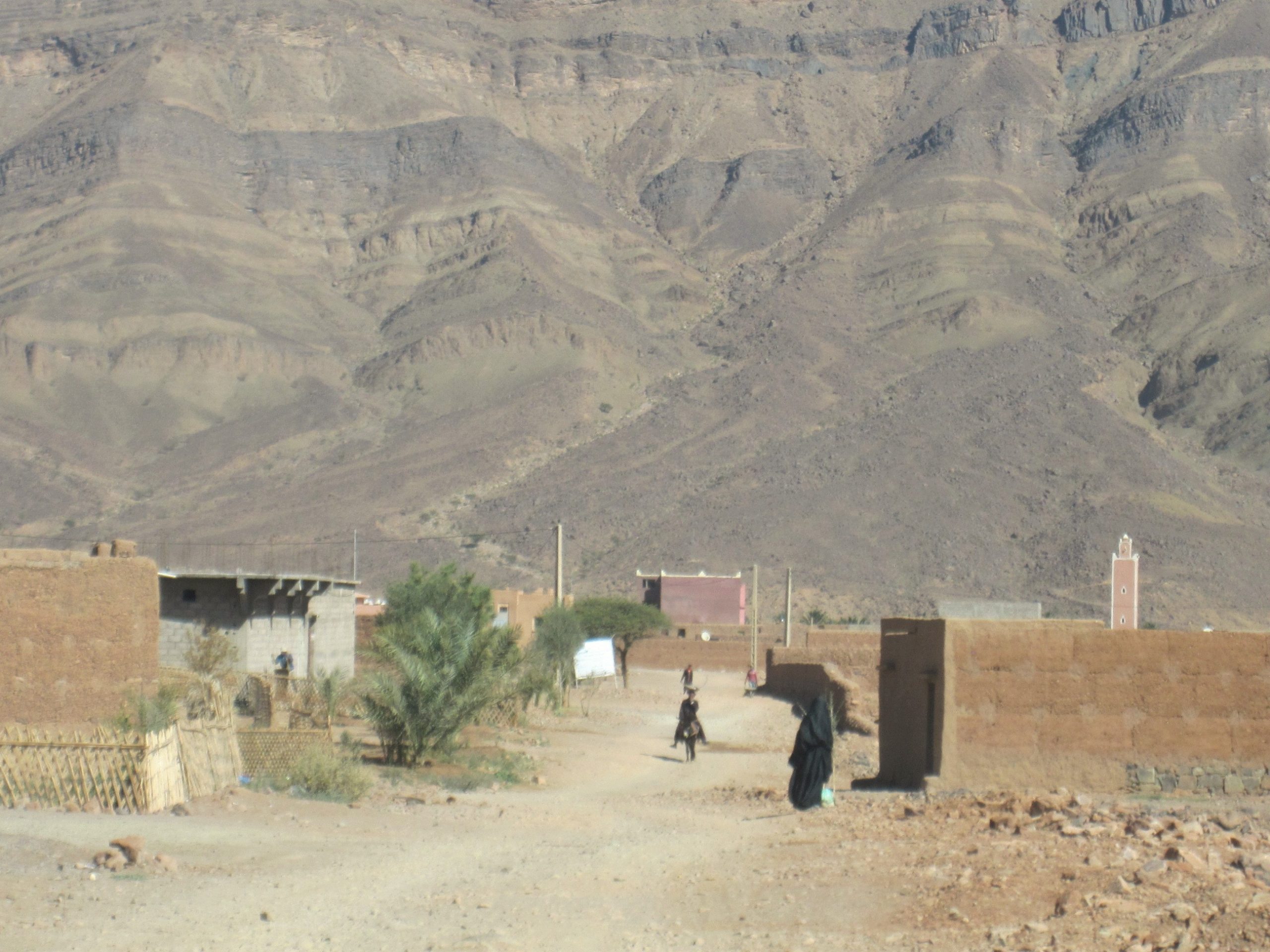 Turns out she and her husband managed the kasbah and knew, of course, that we were the expected guests because we were a) the only guests b) the only foreigners within a five mile radius c) the only people in the village employing transportation that was not a tractor or a donkey. After some typically warm Moroccan hospitality and welcome tea we spent a couple hours exploring the nearby palm groves with two small kids tagging along at a respectable distance, although never quite out of earshot. When we had finally returned to the village amid a beautiful valley sunset we realized they had never even tried to ask us for anything, unusual the world over among kids who take it upon themselves to “volunteer” as local guides, leading us to suspect they were assigned to us like celebrity bodyguards, or wiry little Secret Service agents, only without the transmitters in their ears or a penchant for Colombian hookers. A suspicion that was only furthered when Laynni opened our window the next morning upon a splendidly tranquil village tableau, complete with sleeping dogs, grazing donkeys, bustling townsfolk in simple djellabas quietly passing by on their way to the fields, and the same two kids peering up at her from their patient crouches in the shade of the mud wall below. Just that kind of town.

From there it was back to Ouarzazate to regroup once again, then off to the old walled city of Taroudant where we would encounter a hotel owner who repeatedly demonstrated an almost unreasonable confidence in our ability to understand long, rapid and intricate stories in French despite all evidence to the contrary. His persistence and unwavering belief that we would suddenly just KNOW French was both inspirational and daft, and later something dire happens to my glove.