So far our new relationship with Jordan had followed the usual pattern – at first it’s all new experiences (Wadi Rum) and crazy sex (Petra), but eventually things slow down and you have to meet the friends (Dana, Shobak), then the parents (Amman, the Dead Sea), then the novelty wears off and you realize the sex isn’t so much crazy as strange and embarrassing (Jerash).

Our First Fight
Although we found Amman to be a comfortable, welcoming city, if rather large, into every relationship comes conflict at some point. For us it was Jerash. Now, before we get too far, let me say that Jerash itself was not to blame, its amazing Roman theatres and columns expertly restored to depict a terrific view into its glorious past. It was, as Limp Bizkit put it, just one of those days.

What was theoretically a simple day trip turned into a series of small blunders and mild irritations that somehow all added up to massive frustration. First we got lost on the way to the bus station, then we found it and were told the buses now leave from somewhere else, got to that one minutes after the bus left, waited for the next one which eventually started and pulled forward so we all got on, then we sat and idled for 45 minutes. (Deep breath) Finally on the road, for some reason every time the driver signals a short musical tune was played so naturally he signalled all the time, with no rhyme or reason that I could see, over and over. On top of that, the girl behind us, Italian I think, obviously considered herself another charming spreader of joy, her weapon of happiness being a recorder. She clearly felt she was doing the rest of the passengers a generous favour by playing random, tuneless snippets from songs we’d never heard. That was, until she started attempting to mimic the signal light song. Which, through some strange mathematical phenomenon, was far more than twice as irritating. I think I actually would have let her jam it into my eyeball if it would have meant she’d stop “playing”.

There was a little added flavour in the form of the creepy guy on the other side of the aisle with tight jeans, bulging eyes and a carefully trimmed stubble-stache who spent the entire trip staring across me, eyes glued to Laynni’s every move.

We did enjoy a brief respite from the day’s struggles while in one of the Roman theatres. A large group of teenage schoolgirls was milling about until, naturally, the piper arrived. Were we to believe that 2,000 years ago this ancient Roman city was a hotbed of Scottish bagpiping activity? Who are we to say? Regardless, this triggered an eruption of activity which saw the girls and some adult women band together in a strange combination of line dance, breakdancing circle and conga line. Just like the one Brutus used to distract Caesar.

Then it was really hot out, we got wrong directions to the bus, twice, then hustled by a cab driver. Ah, these things happen. They still suck, though.

Makeup Sex
The City Mall: a little piece of North America in the dusty suburbs of Amman. A fairly new mall with nothing but high end clothing stores, a “fries with that?” food court and a big multiplex cinema. It apparently draws rich kids from as far away as Syria. A movie, some popcorn, some Mickey D’s, groups of scantily clad teenage girls and self-consciously nonchalent teenage boys (easier to pull off because smoking in malls is still allowed here). Every now and then it’s nice to feel like you never left home. Mind you, I hate the mall at home so that kind of screws my theory, but whatever.

Deluding Ourselves With Compromises
Back on the sightseeing horse, but this time on a tour. Started with Bethany-on-the-Jordan, a relatively new site and the object of, in my humble opinion, some severely unrealistic expectations from the Jordanian tourism authorities. Shuttles, multiple restaurants, mandatory guides and an entrance fee equal to the Pyramids of Giza. All this for a short path along a tiny, muddy branch of the Jordan River ending, allegedly, where Jesus was baptized. I am obviously not the best person to argue the Bible, but such a lengthy body of evidence was presented by our guide in such a suspiciously defensive manner that we couldn’t help but think “thou protesteth too much”. Just a feeling.

The Dead Sea, however was pretty cool, definitely one of the best places to visit in Jordan. Lowest place on earth, really salty lake on the Israeli border, yada yada. Hot day, couldn’t wait, I go charging in, diving under like a man on fire. Oops.

First thing, Laynni says I was only actually under water for a millisecond before the salt pushed me back to the surface like a “dynamited fish”. Then it took effect on my face and I yanked my head out, face crunched up and rubbing my eyes like a baby emerging angrily from the womb. Within moments it felt like my eyes were turning to dust while my lips shriveled into skinny little pieces of leather. For a minute I thought I might need colagen injections for my entire face but luckily there was a freshwater shower on the beach where I was able to mostly rehydrate my facial features.

The Breakup
Over the years we’ve developed a foolproof system for deciding when it’s time to pack up and move on. As a rule, Laynni only swears for two reasons: 1) She thinks it’ll be funny, or 2) She is so filled with pent-up anger and frustration that it just slips out like a turkey fart at Thanksgiving dinner. And that’s the one that tells us “pack your bags and put on your Immigration smile, it’s time to go, folks”. After about a month in Egypt Dahab’s gauntlet of restaurant touts suddenly became – I’ll change the names to protect the innocent – “those buggers”. Likewise, we’re just hanging around Amman when all of a sudden everything she said was described as “buggering”. As in “those buggering horns” and “that buggering cab driver”.

Excuse me sir, when is the next bus to Syria? 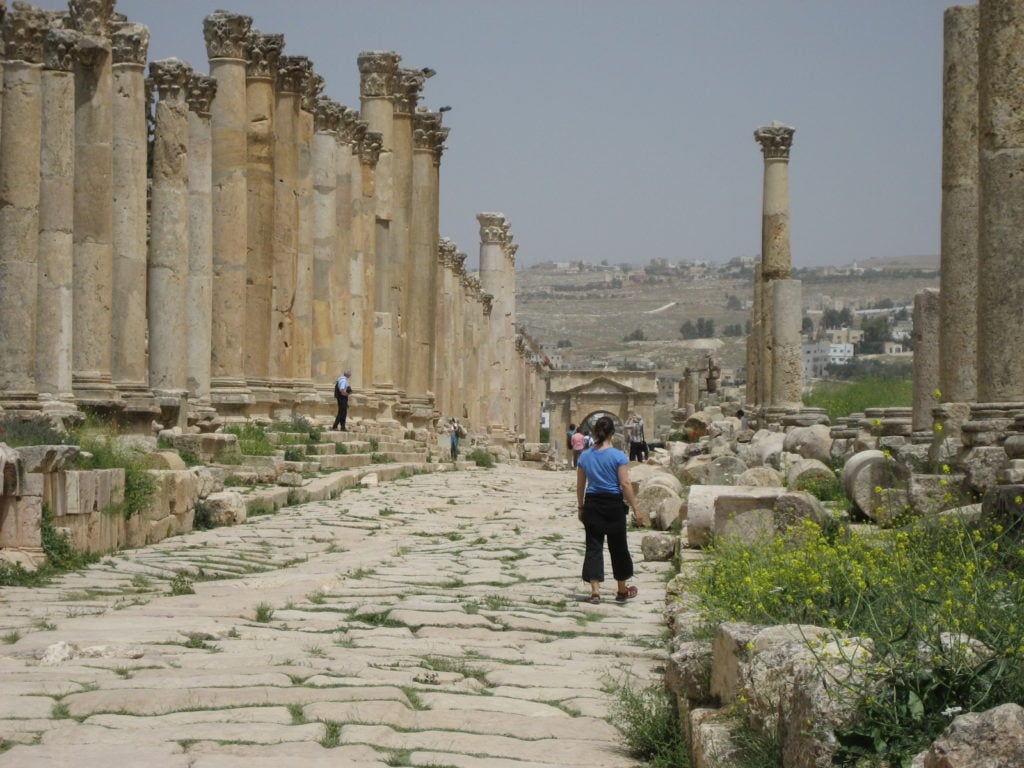 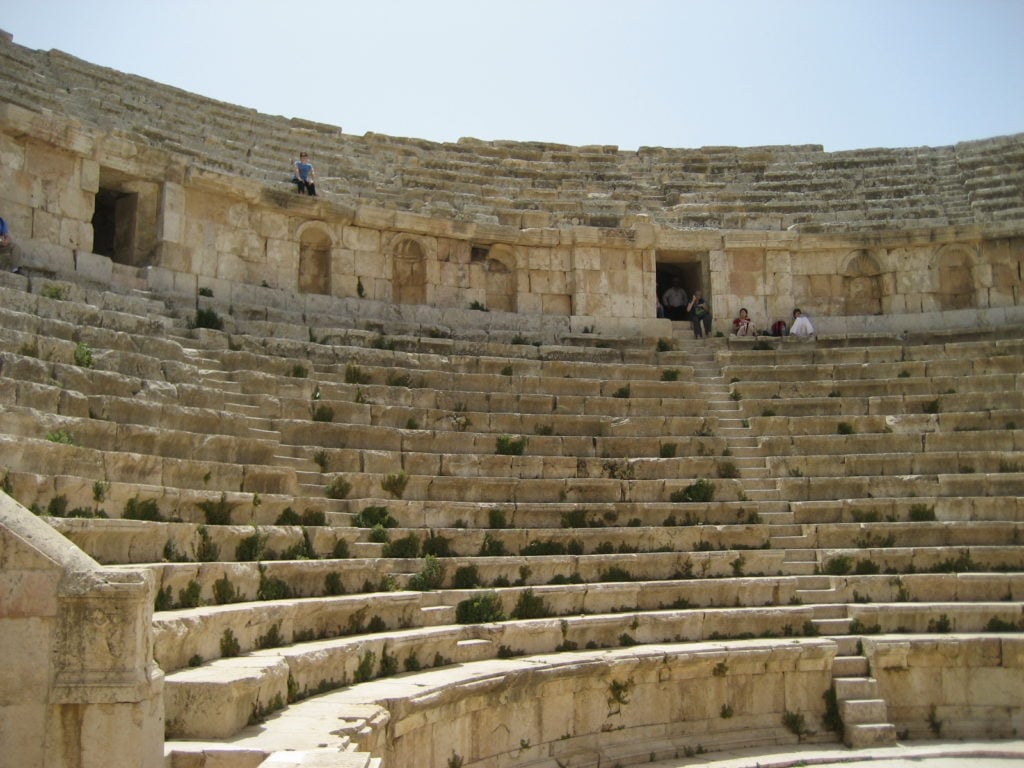 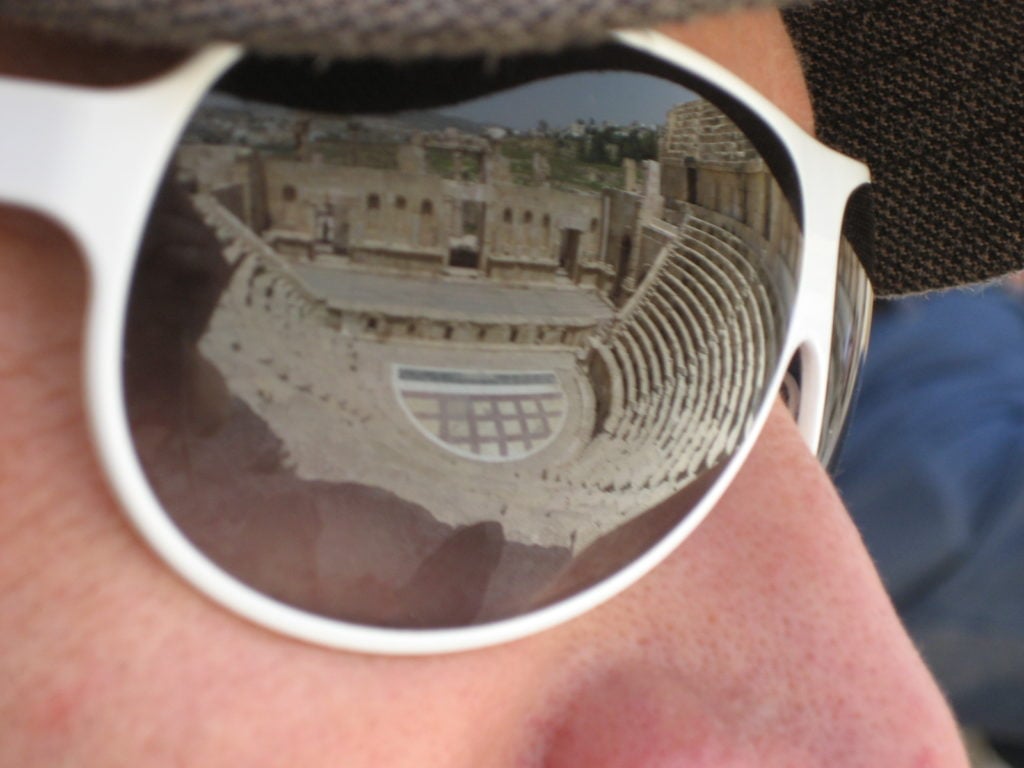 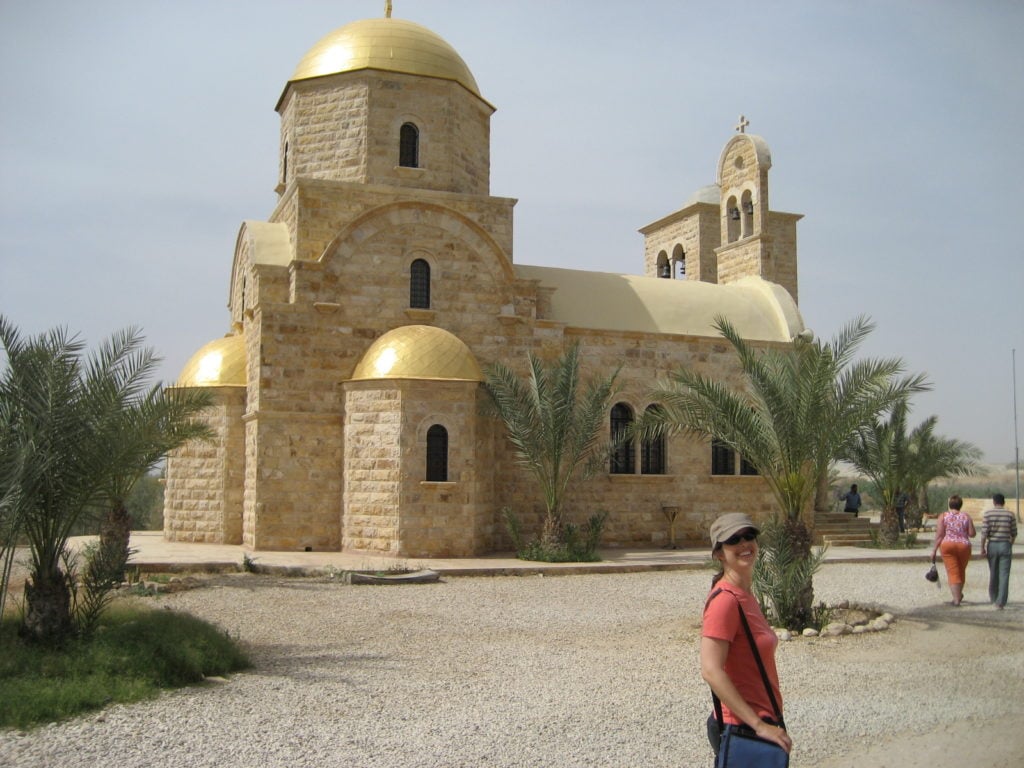 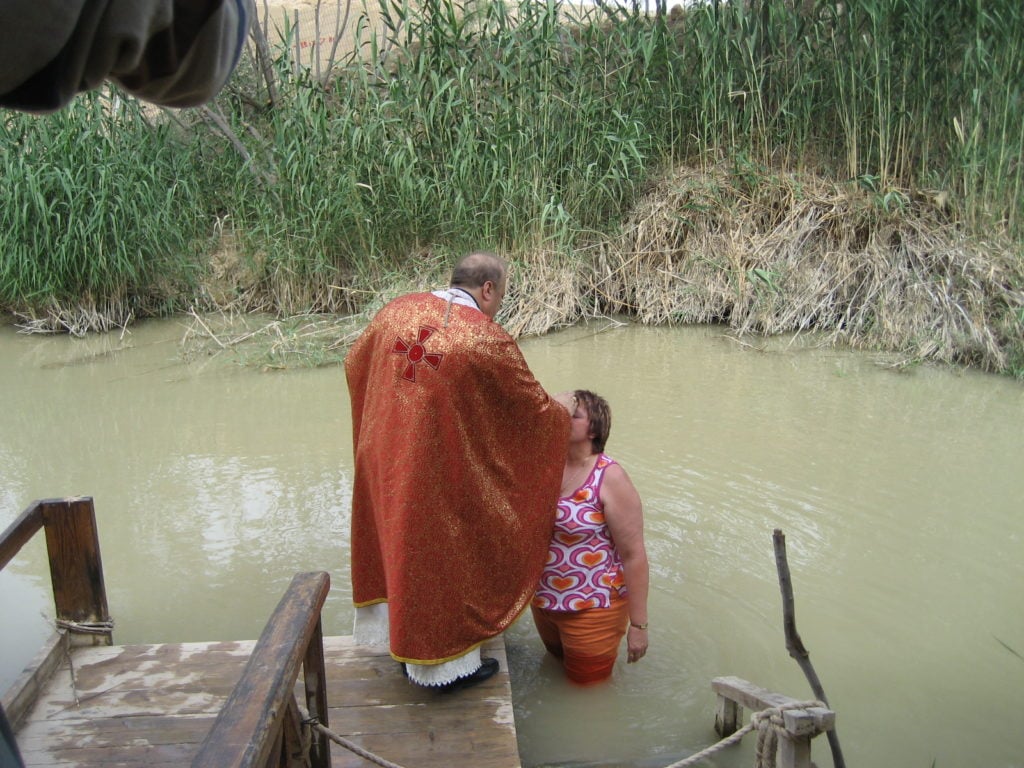 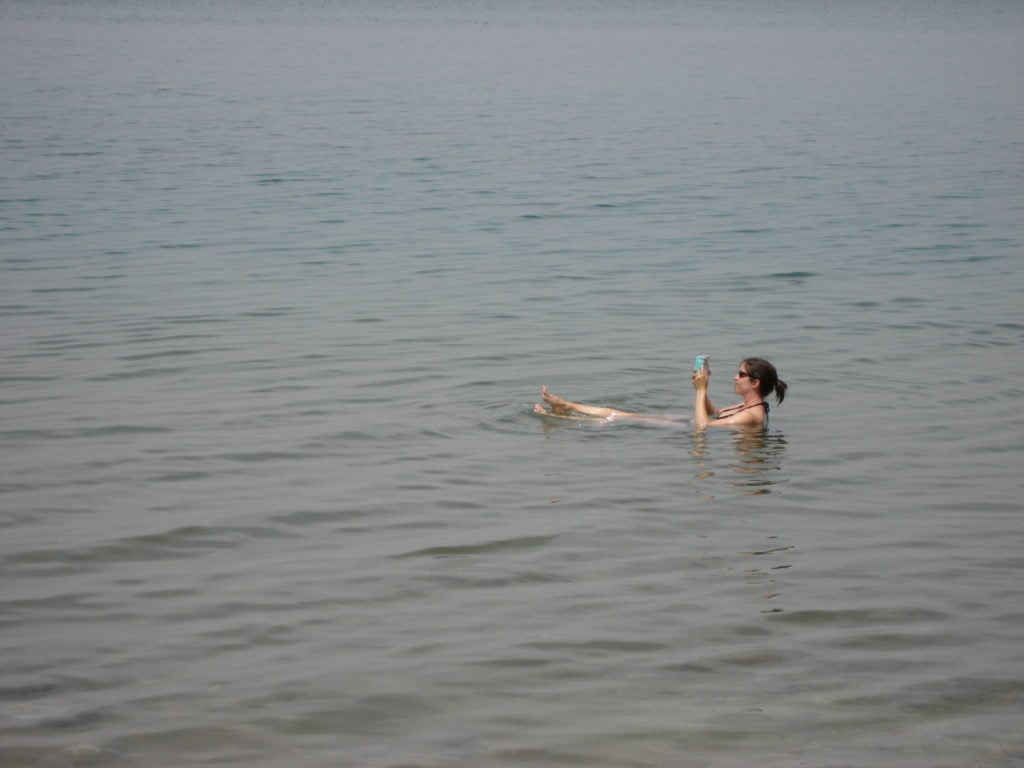