From Cairo we took a comfortable train to Alexandria, Egypt’s 2nd largest city, which sits right on the Mediterranean. We only stopped for one night: nice corniche along the water, checked out Fort Qaitbey and then their famous library. That’s right, we traveled halfway around the world to see a library. Nice library though. Lotta books.

Then we were off to Siwa Oasis, 4 hrs down the coast and then another 4 hours into the desert. It is one of the most remote towns in Egypt, situated right on the edge of the Great Sand Sea and just 20 – 30 km from the Libyan border. In fact, rumour has it smuggling can be a problem which means  that apparently Libya has a shortage of either sand or donkeys. It is actually a really nice place and would be just like stepping back in time, that is if 19th century wagons had been equipped with car horns. Overall, a pretty even split between motorbikes, Land Rovers and donkey carts. Siwan taxis are just small donkey carts with padded seats driven by young boys (one of which bailed us out when seemingly lost in the backstreets).

On our first night in Siwa there was a wedding. These are obviously major occasions since it seemed as though the whole town turned out to be part of the long, loud vehicle procession. It was led by a decorated Land Rover, but the rest of the vehicles were just tiny trucks honking for all they were worth and crammed well beyond capacity, people hanging out on all sides with those in the middle paralyzed by the crush.

Truck # 1: Young bride and her friends, a bevy of exuberant virgins clapping, singing, and decked out in colourful celebration attire, clearly excited by the opportunity to be the next one in the bridal dress.

Random Motorbikes: Appeared to be the married men, somewhat bored-looking but seeming to enjoy darting in and out of the procession interrupting the flow any way possible.

Truck # 4: Overflowing with young boys trying to make as much noise as humanly possible in the most obnoxious manner they can think of. We thought one kid was using one of those firewheel things that shoot sparks but realized that he actually had just lit something on fire and was swinging it at anyone he could reach, sparks and embers flying everywhere.

Truck # 5: The married women, sombre and sullen, giving no indication they believed this to be a joyous occasion, let alone a solid long-term plan. Celebratory gestures limited to occasional spitting.
One of the really nice things about Siwa is that it has a number of attractions in the town itself, as well as several more within walking distance. On our first full day we hiked out to the Oracle of Amun, where Alexander the Great had come to learn what his future held. In fact, some people still believe his tomb is buried somewhere in Siwa. You know how it is though, it’s always the last place you look. After that we stopped at Cleopatra’s Bath, a natural pool surrounded by palm trees and obviously named after its most famous visitor. I can just see her and her friends hanging out by the pool while Alexander has the Oracle reading his palm and dealing out tarot cards.
“So I told him, I said, Al, save your money. You’re travelling to foreign lands with a massive army intent on pillage and plunder. I think I’m going to go out on a limb and predict conflict in your future. What do you think?”

We’ve also learned a few things about oases. I’ve always pictured these verdant valleys full of green palm trees and lots of water in the midst of the dry, brown desert. Which they are, to some extent. What we hadn’t thought about, though, was that the water comes from below, not above, so since there is no rain, everything just gets dustier and dirtier. In fact, most of the “green” palm trees actually end up being more of dull greenish grey. It’s strange going down a charred, dry street with dust swirling all around while the soccer field nearby sits vacant under 2 inches of water.

The next day us, Kamin (Aus) and Alexis and Christine (Calif) all took a “little bit of everything” tour with Abdul from Siwa Oasis. While everyone, and I do mean everyone, here goes into the desert in Toyota Land Rovers, for these short trips Abdul chooses to use his old Chevy 4 x 4, from probably the early 80’s, which was apparently his first vehicle (he also has the requisite Land Rover for longer excursions). We were to learn more about this curious choice later on.

After piling into the back our first stop was Abu Sharouf, another natural pool, this one in the middle of the desert, where we were once again able to practice changing our clothes under a sarong and, as usual, diving over a chair. After that the ruins of another ancient city and then off into the sand dunes. Abdul had Laynni help him let some of the air out of his tires (even he could tell she was the mechanic in the family) for better traction in the desert. Then, at least in Abdul’s mind, the flag dropped on the Siwan leg of the Paris – Dakar – Cairo Rally. At highway speed we zigzagged across the desert, charged straight up sharp dunes before plummeting down the other side, launched in 90 degree turns that had 2 of the wheels just brushing the top of the sand, all with us on a couple bench seats in the covered box. Although we also had a great time, the look of glee on Abdul’s face would have made it difficult for a spectator to know who was actually paying to do this. Turns out him and his Chevy have a bit of a reputation – both for wild rides and unsurpassed black exhaust fumes that are conveniently sucked back up through the seating area, allowing you to sit back and calmly enjoy all the acrobatics with a serene and somewhat simple grin on your face.
Along the way we even stopped for some sandboarding. I won’t go into a lot of detail except to say that I honestly, but very mistakenly, believed sand was softer than my ass. It is also our opinion that if ski hills were always powder but you had to walk back up to the top nobody would ever go skiing. Ever.

Next time up I’ll tell you about our 420 km journey on the Desert Road from Siwa to  Bahariya. For now, however, I ‘ll just mention one final, more practical problem; I had previously mentioned how difficult it was to get change from anyone here (or most countries for that matter). Anyway, as a result Laynni has made it her mission to hoard as many small bills as possible so that we always have a stash to fall back on. Unfortunately, what began as a logical plan quickly developed into a frightening obsession. Luckily, I’ve now learned to simply drop my wallet and back away slowly anytime she spots a ragged 1 LE bill peeking out the top and gets that all-too-familiar gleam in her eye. She then pounces! – snatching small bills to her chest in a frenzy before scurrying off to bury them deep inside her ziploc bag of underwear.

I have to admit, I’m concerned for both her mental health and her personal hygiene. Suggestions are welcome. 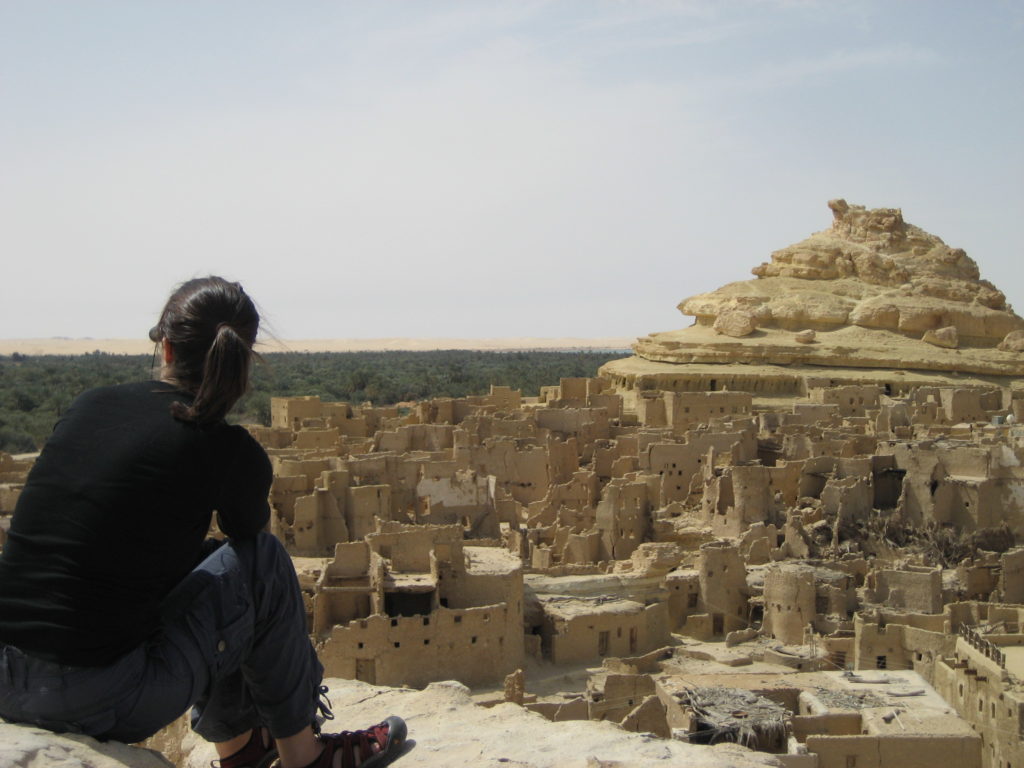 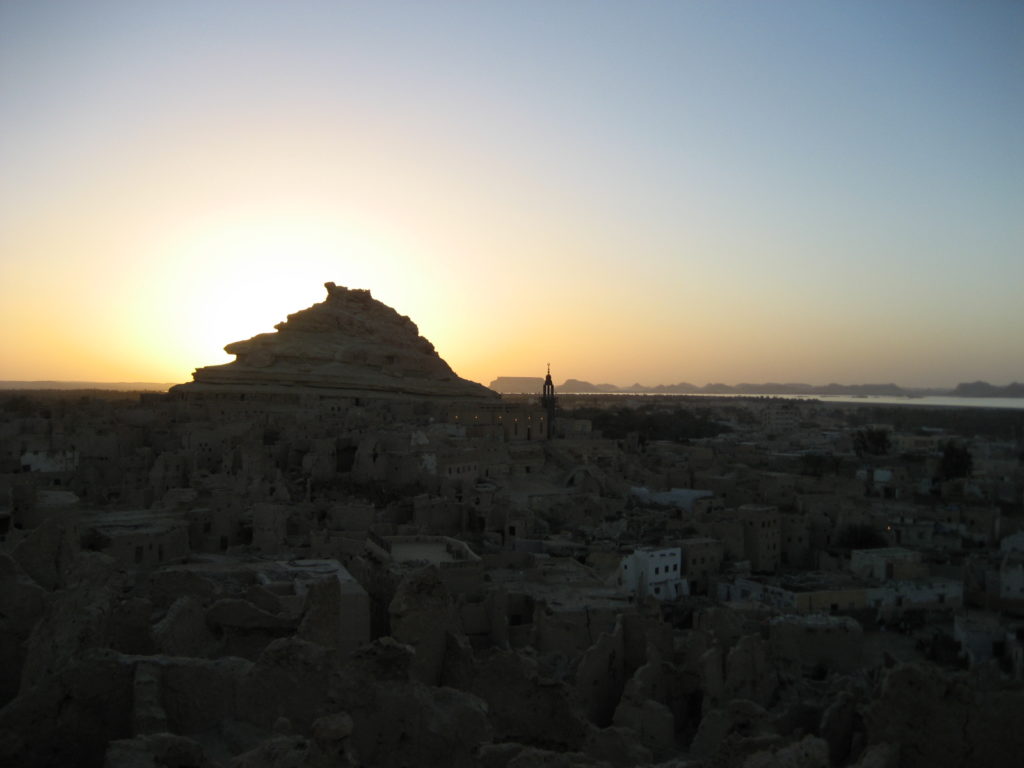 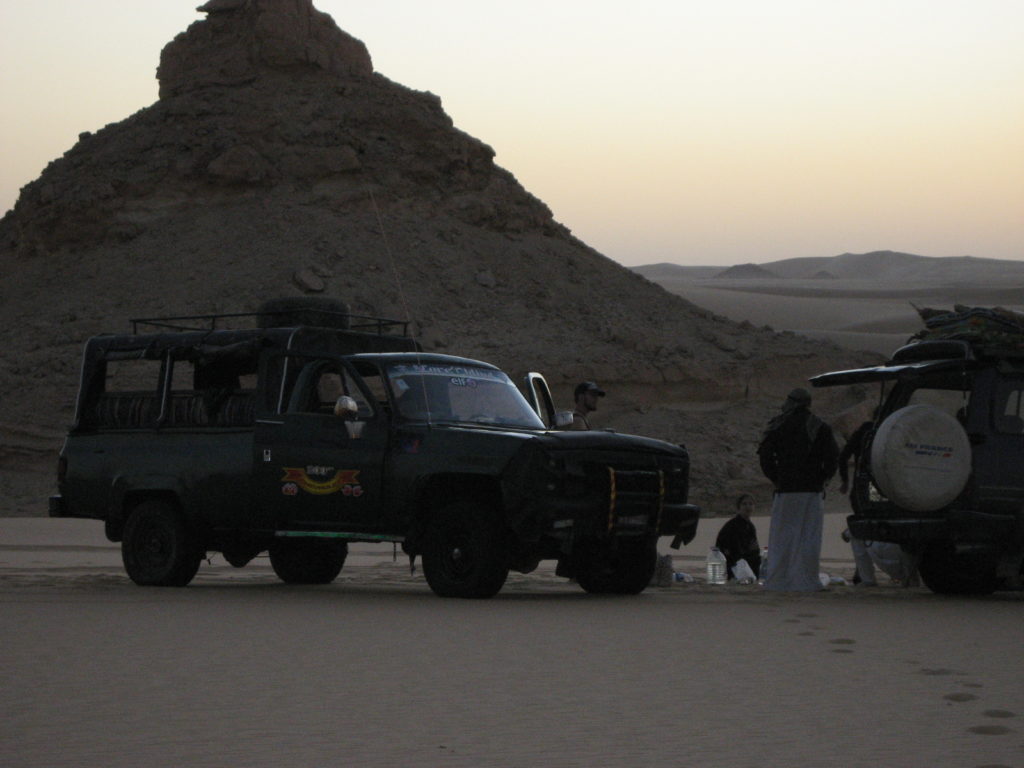 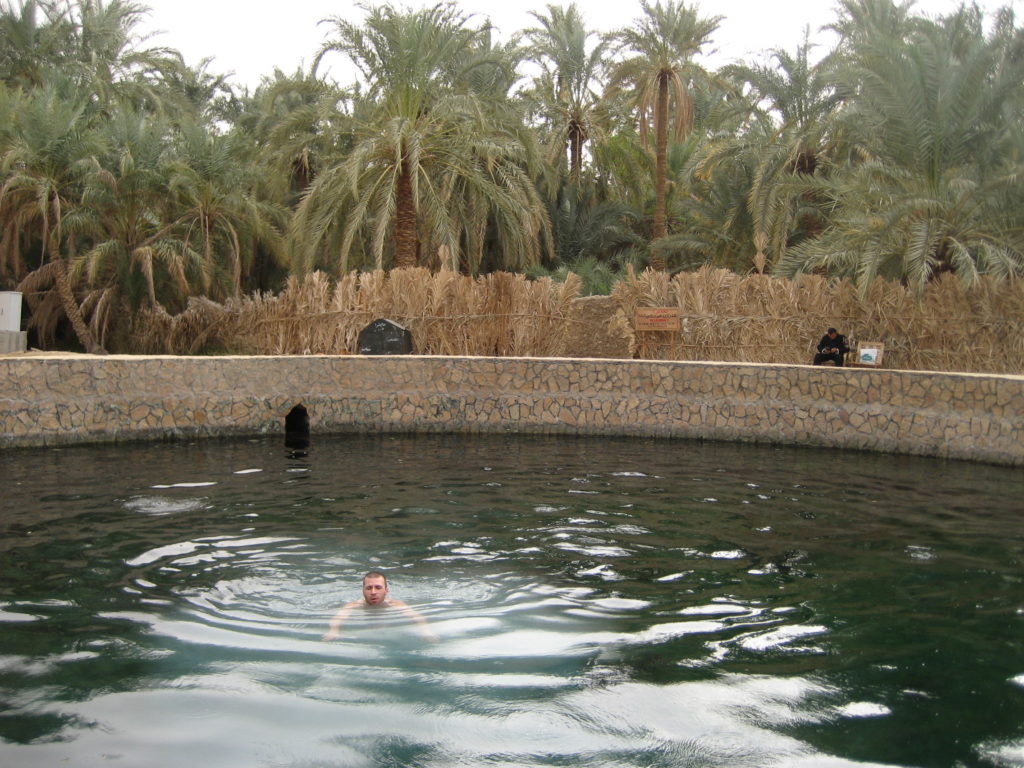 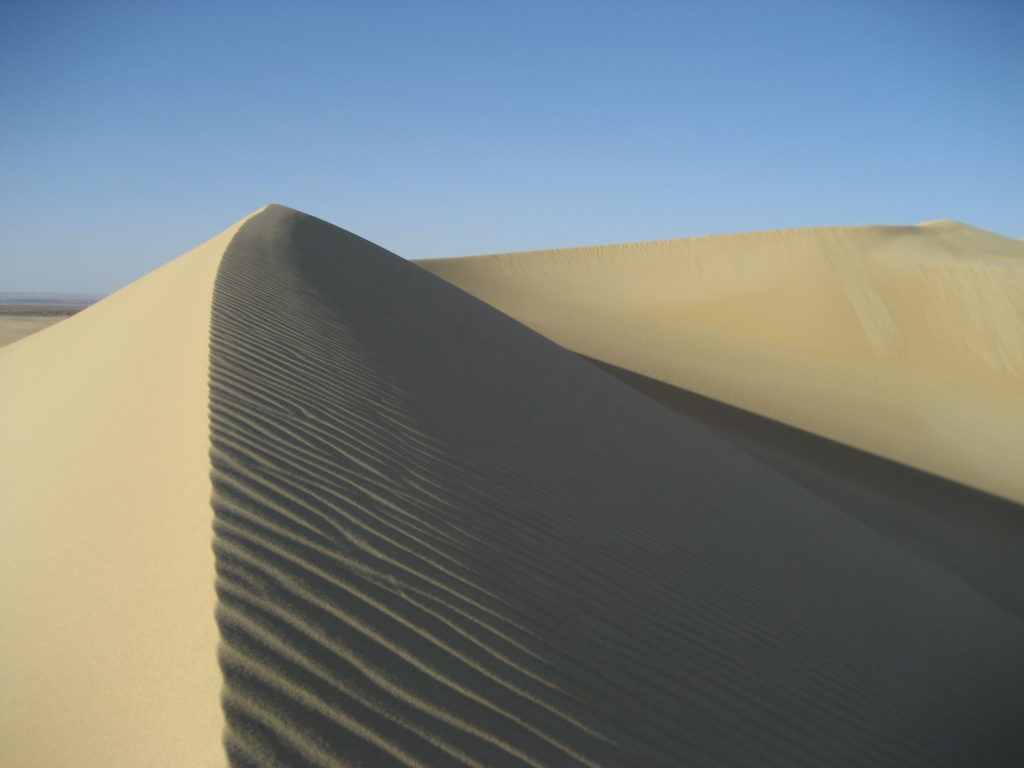 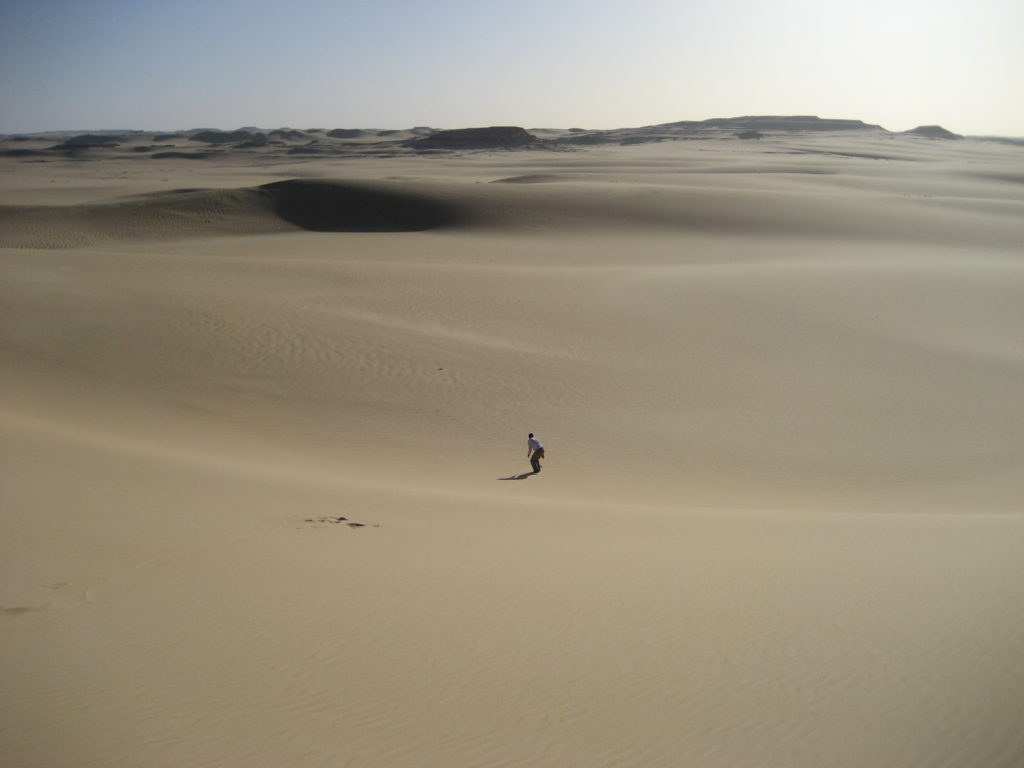 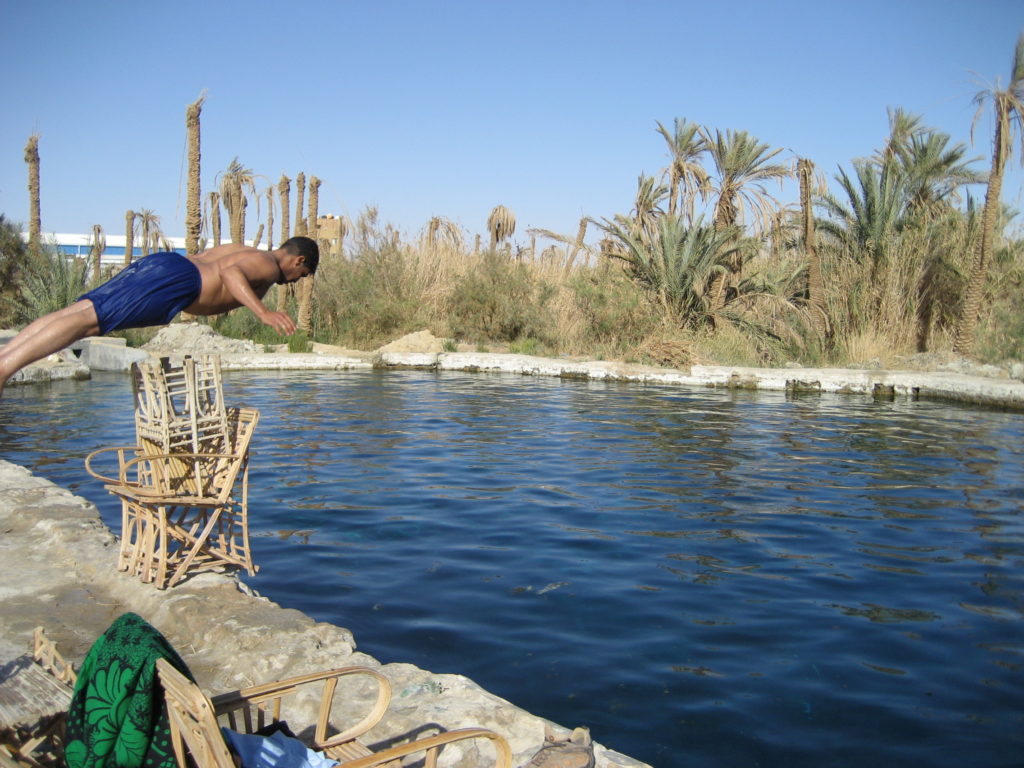