Before we could get down to serious in eating in Alegria, we had to get there. By bus, of course. Most of our bus trips in Central America have turned out to be quite similar – some are slightly nicer, others more gaudily painted – but one thing El Salvador seem particularly advanced in the development of their on-board sale force. I’m referring to the proliferation of men, women and children that rush the bus at each stop, squeezing their way up and down the aisles selling everything from corn on the cob to men’s razors (for a definitive list of everything we can recall being offered on a bus in the past month see Appendix I). Sometimes they ride a while, presumably catching a bus back the other direction eventually, and sometimes they just rush on, hurry back and forth, and dash off as the bus is pulling away. Often blind guys get on and either just walk up and down with a tin cup or sometimes sing, or maybe play the accordion. One time a young guy with a hair lip came on near Alegria and hung out for a while, long enough for us to start thinking he might simply be a passenger, until he suddenly burst into action, speaking far too fast for me to understand much, but clearly giving us the inside scoop on God’s plan and, I suppose, how it might relate to this particular bus trip, and assuring us that the Road to Enlightenment certainly involves a few coins tossed his way. I think he may have even mentioned something about Mel Gibson and the Jews, but like I said, I only caught bits and pieces.

An interesting innovation that we noticed – many seats had an additional cushion shaped like a 2L milk carton that would go between the seat and the wall so it could be pushed out into the aisle a bit to allow more room for “Hangers” – people with no real seat that spend the entire trip with one cheek “hanging” over the edge. Marginally better than standing, but when practiced over an extended period of time can cause lopsided ass musculature, as well as a loss of inhibition concerning caressing a stranger’s ribs with your ass.

Alegria, Spanish for happiness, is another small town up in the much cooler hills of El Salvador, one renowned for its picturesque views and unspoiled hospitality, much like a hot tub party at David Schwimmer’s house. We arrived near the peak of Semana Santa, Easter Thursday I believe it were, which, if memory serves, was the day Jesus was interrupted in the bath by the quiet apostle who always wore slippers and thought carpentry was “simply fabulous”. Anyway, wisely skittish about the massive holiday exodus out of the cities we had booked a room ahead at Entre Piedras (Among the Stones), reputedly the best hotel in town (although at $32/night it was still cheaper than 4 dozen good quality lab mice). Overall a nice place, with a welcoming staff that exuded friendliness and white shirts. They also had good wi-fi, a comfortable family vibe (in a good way, not a smarmy Kardashian family way) and an impressive collection of antique books on Salvadoran history which the bored old patriarch vigorously encouraged we read, and, presumably, praise. He may have been a little crazy, as well, at least based on the morning he came up to Laynni, said Buenos Dias, to which she replied, appropriately she thought, Buenos Dias as well. Then he rattled off several more sentences in rapid fire Spanish of which she caught only “muchacha”, and then signaled to him that her lack of Spanish was going to be a problem here. To which he thought for a minute, then slowly and carefully said, “Good….Morning”, having apparently deduced that that was the part she didn’t get. Anyway, back to some of the little quirks of our hotel itself. Our “double room” featured just two tiny bunk beds, and the TV was so old that each of the 12 channels came with its own button, similar to a fully automated 1-800 sex line. No complaints about the Samsung Deluxe VHS VCR, though, featuring not 2, not 3, but 4-head technology. Unfortunately, though, we were only carrying the two videotapes we always take on trips, the one of me teaching a stray cat how to melt butter in the microwave, and Ghost. Nonetheless, these were minor eccentricities, easily forgotten among the parade of hotels that represents our day to day life. What made this room truly special, and will certainly prevent it from fading slowly into oblivion along with my penmanship, and Jack Black, was its bizarre location, seemingly placed in the Direct Magnetic Centre of the hotel. We had two doors, which opened either directly into the main dining room or the middle of the crowded patio, in both cases literally affording you the opportunity to “run into the other guests”. Further complicating the logistics of this setup was the fact that our “bano privado” (Spanish for “place where you can shit in solitude”) was actually located far at the back of the hotel, something we felt made the name a bit misleading, if technically correct since we did have our own key, and were in no danger of being stuck waiting outside fidgeting from foot to foot while trying to concentrate on dry things, like British humour, or carrot cake, while a 20-year old Salvadoran girl worked her eyes with pool cue chalk and forced her thighs up out of the waistband of her skinny jeans. But the worst part was enduring the embarrassment of emerging from our room in the morning, groggy and disheveled, into the midst of early-rising holiday-ers from San Salvador sipping coffee and texting, with my toothbrush in hand and self-conscious because I really wasn’t certain I could hold it long enough for my pee hard-on to vanish entirely.

Well, that is probably more than enough about the hotel we stayed at. Other than that, Alegria was a cute, hilly little town about 1,600 metres above sea level making it quite a bit cooler than most of El Salvador (or Central America for that matter). Late in the afternoons the clouds would roll in, you could literally see them moving along the streets, obscuring the town and creating a foreboding atmosphere of impending danger like the start of a Stephen King double-feature, or standing on Kate Gosselin’s doorstep with a Hollywood eviction notice. The people, however, were incredibly friendly and welcoming, and the whole town seems intent on turning Alegria into the next great holiday destination for wealthy city folk. We killed time wandering around the nice, but tiny, Central Square, eating pupusas and watching people engage in a all the usual types of Easter celebrations, from solemn prayers to symbolic street art to kids punching each other in the junk.

One day we hiked about 2km uphill from the town itself to Laguna Alegria, a nice, natural Crater Lake and clearly Part B in their master plan for World Tourist Domination. Based on size, number of hot dogs and the abundance of families gamely determined to provide their children with proof of a happy childhood for them to share with their psychiatrist in twenty years time while struggling through their second divorce, it was somewhat comparable to Waskesiu’s South Bay. Just insert rocks, weeds and the smell of sulfur in the place of sand, mosquitoes and the smell of weed.

Not sure how it compares to the rest of El Salvador but it seems like they take their Easter celebrations particularly seriously in Alegria. All over town people built large (maybe 2-3m x 2-3m) murals in which they outlined various religious scenes then filled them meticulously with coloured sand and, in some cases, rice. They used small funnels to place the sand just so, with the end result being some quite impressive, and strangely appetizing, works of art. Please don’t ask for more detail than that. I do know that Jesus featured fairly prominently, and there were more goats than seemed necessary. That evening they held a large and solemn parade which took about 5 hours to cover roughly 10 blocks, with a couple terribly off-key singers leading a large procession of purple-robed young men carrying a Hungarian-sized Jesus in a well-lit box. Don’t worry, the box had been carefully locked and sealed, to prevent him breaking free and embarking on a murderous rampage of vengeance and late-night snacking. Meanwhile the procession, which also included another 40 or 50 worshipers/guards, slowly inched its way along the Holy Route, crushing the previously discussed artistic masterpieces beneath Nike-clad soles. Baffling, intriguing, and not unbearably loud.

After a few days we decided that we had, indeed, explored the 3 block radius around the central square to our satisfaction, and that maybe we should skip out for a night in San Miguel, the largest city in eastern El Salvador. It was on the way to Honduras, so would save us at least 2 ½ hours and 3 modes of transportation the following day, plus it had movies, internet and Pizza Hut. Unfortunately, the internet was down the whole time we were there, and the only movies showing in English we had already seen so, to make up for those shortcomings, we went to Pizza Hut and ordered about 3 times the food a normal human might safely consume with the thought of having leftovers, I believe actually frightening our waitress in the process (serves her right, though, for not believing we really could want all that and breadsticks). The end result; we stuffed ourselves for lunch, had greasy leftovers for supper (no microwave or fridge, unfortunately) and then somehow forced a bit more down for breakfast, although I had to fight through a worse bout of gagging than the time I walked in on Madonna teaching her dog party tricks. Oh yeah, and on our taxi ride home, we totally smoked this guy on a bike, and then just kept driving. What an awesome cultural experience.

Next up: our marathon day of travel out of El Salvador, into Honduras, out of Honduras and into Nicaragua. 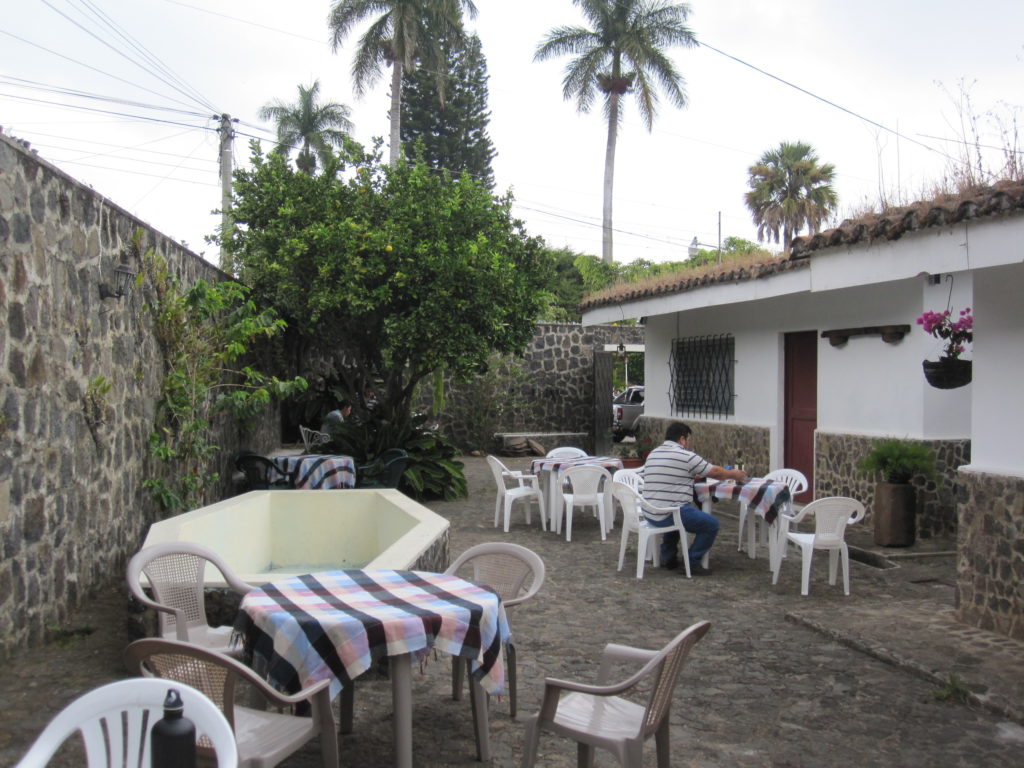 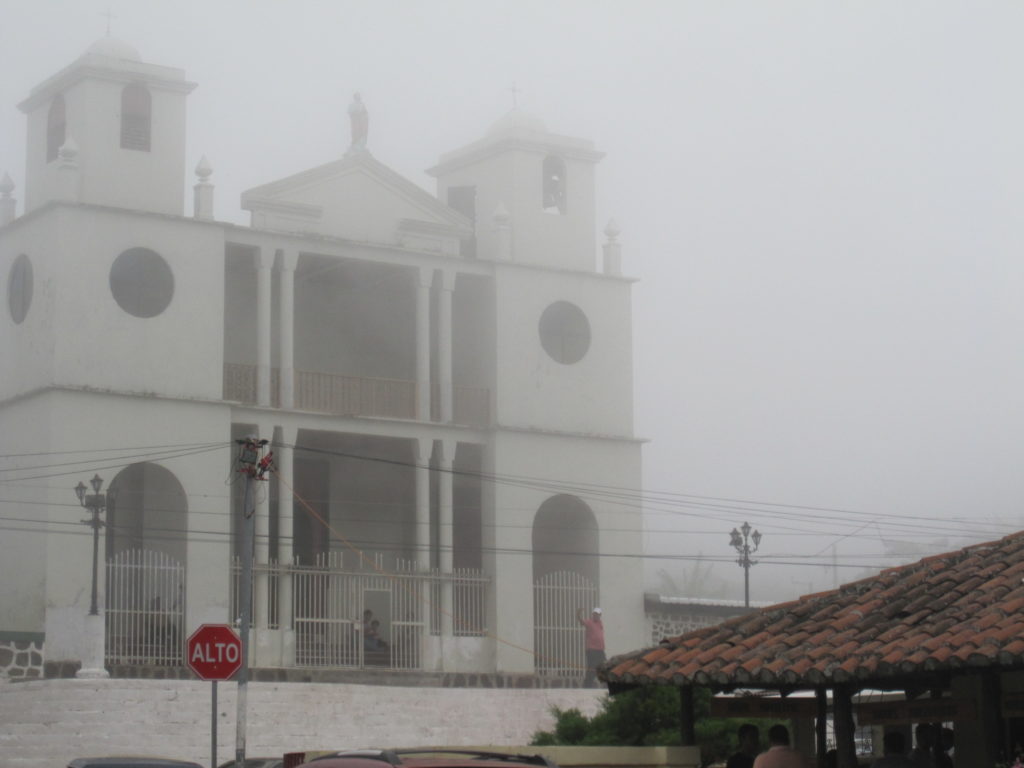 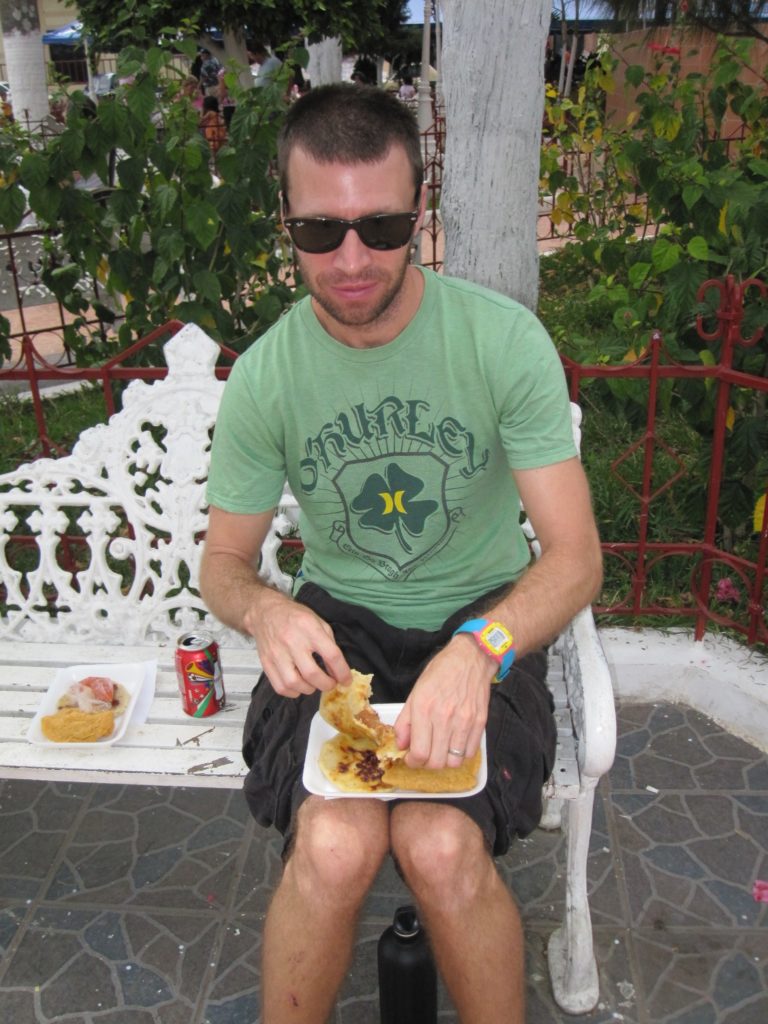 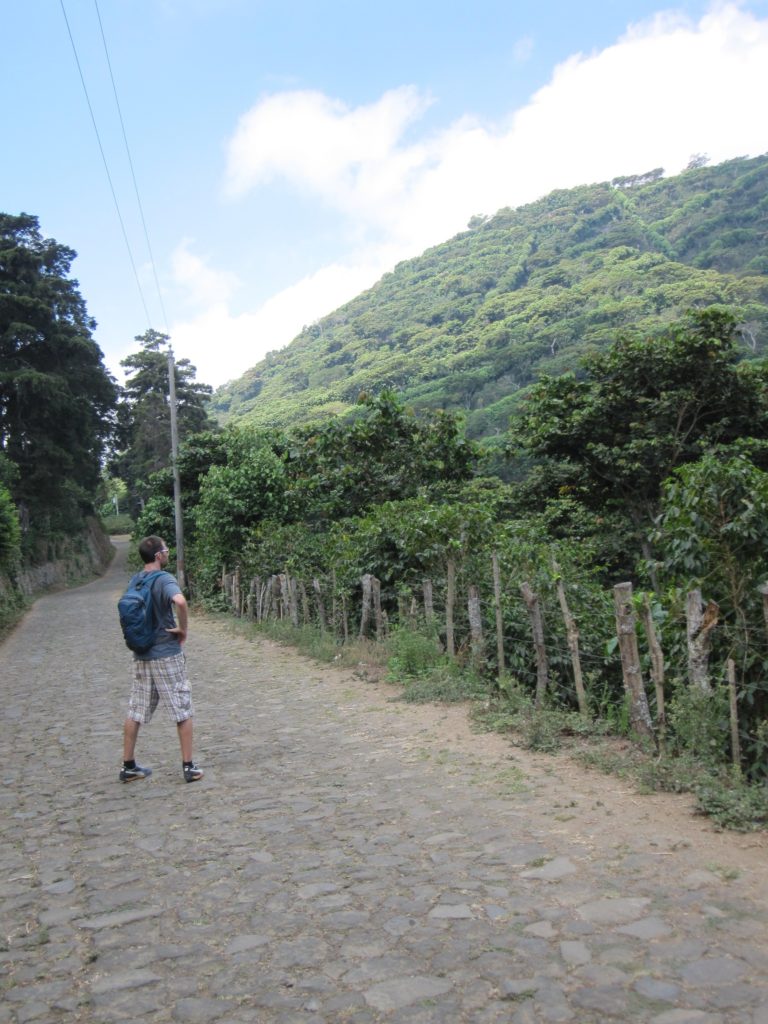 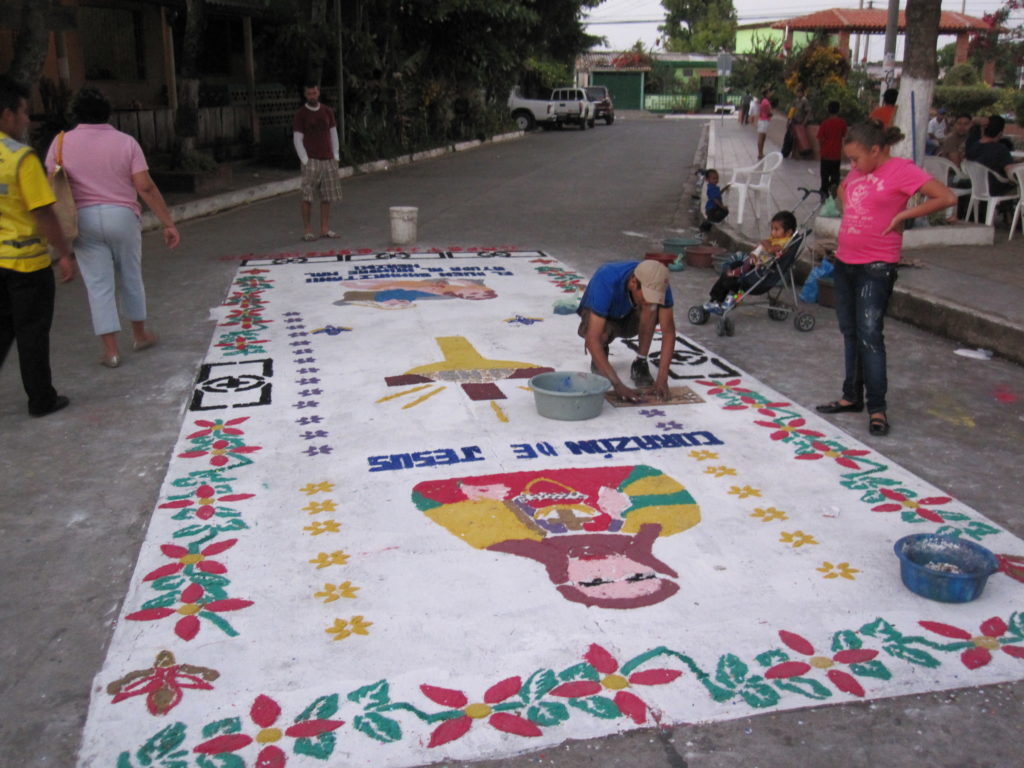 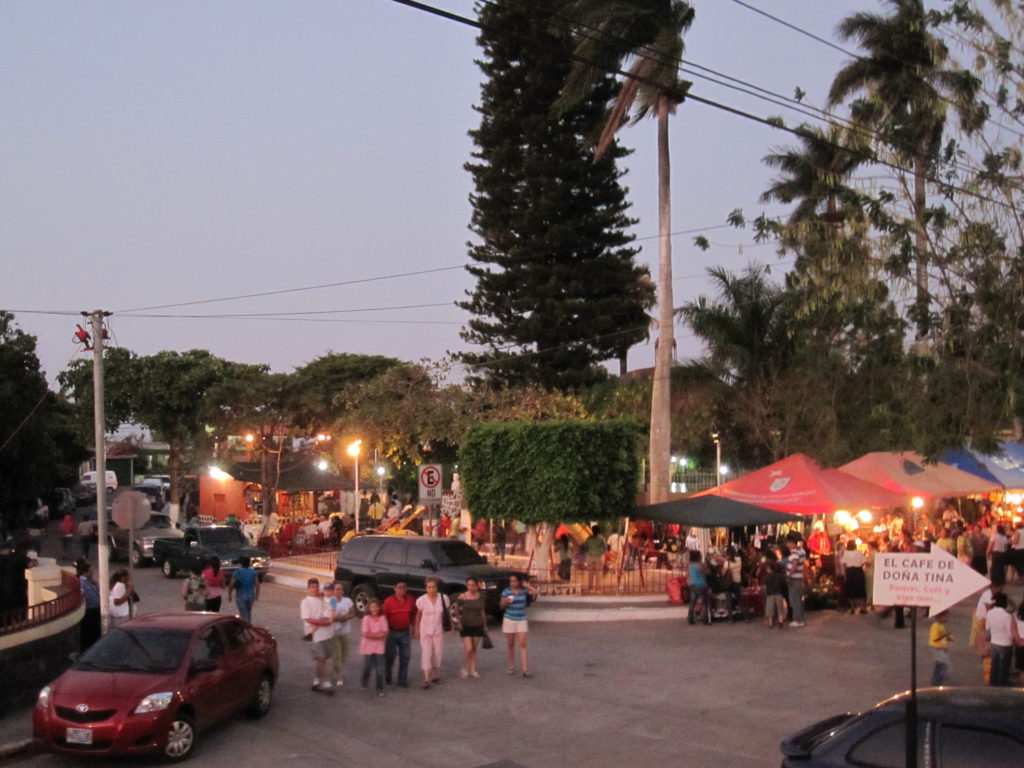 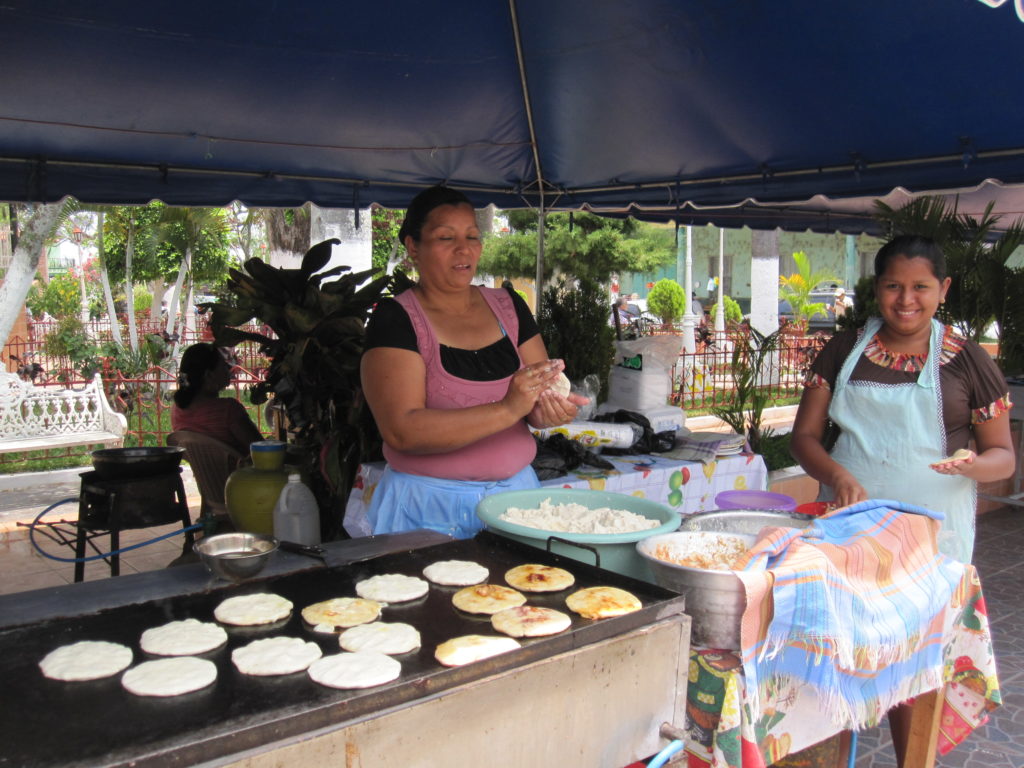 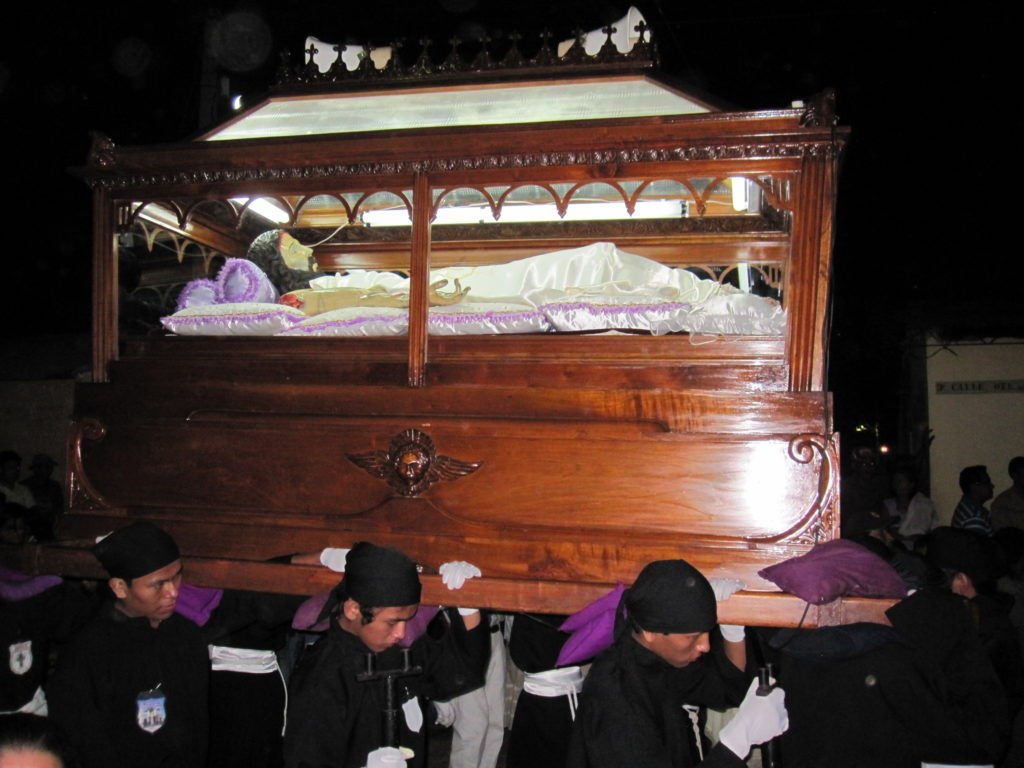 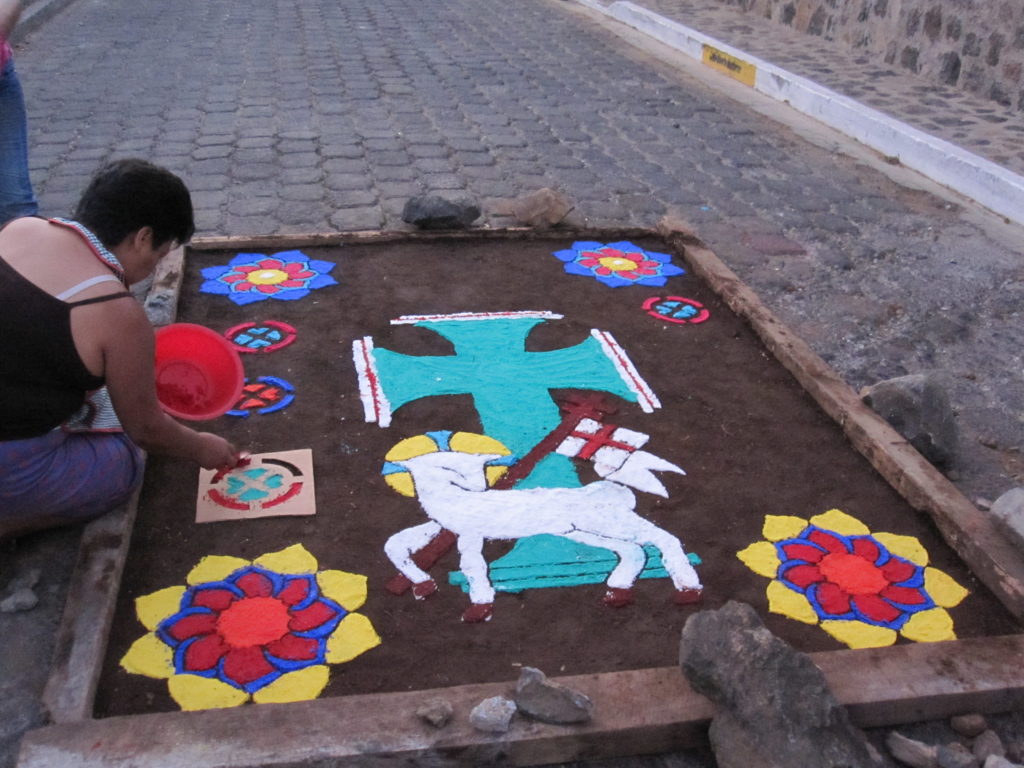 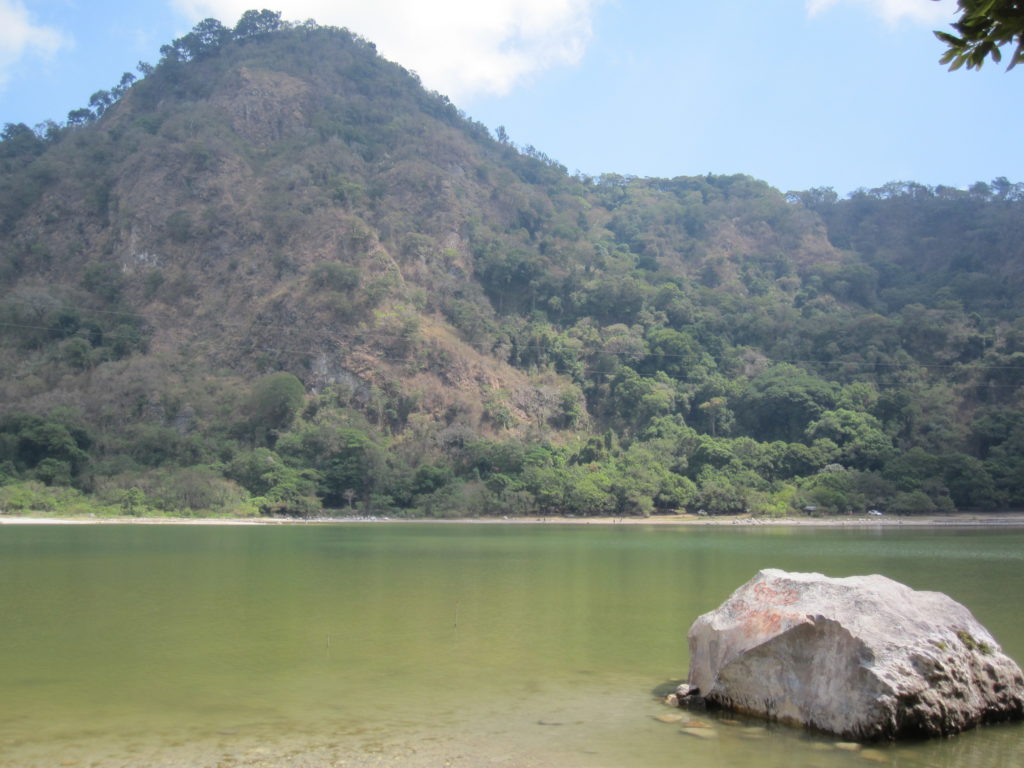