It Takes Two to Tango – Ushuaia and El Chalten

Argentina, the second time around! Okay, now that I’ve gone to great, long-winded lengths to describe Antarctica in such painstaking and inconceivable detail, well, I think I’m kind of going to speed through Argentina – Ushuaia, El Chalten, etc. – glossing over a lot of it and just focusing on the important things, such as meat (i.e. steak) and feet (i.e. hiking).

Even before we headed deep south to that white continent way down there, we spent a night in Buenos Aires, one of my personal favourite cities, although we didn’t have much time to enjoy it properly thanks to the way the whole flight/flight/ship schedule worked out. Just enough time to wander around San Telmo for a while pointing at things and going “Oh, I remember that”, or “I think we ate there once”, or “Look, that dog with the droopy testicle still lives under this bridge”. Then we swung by McDonald’s – not to eat, for once, but just in hopes of recreating a photo of our friend Tricky and I in cardboard Tango cutouts that you can stick your head through for photographs. 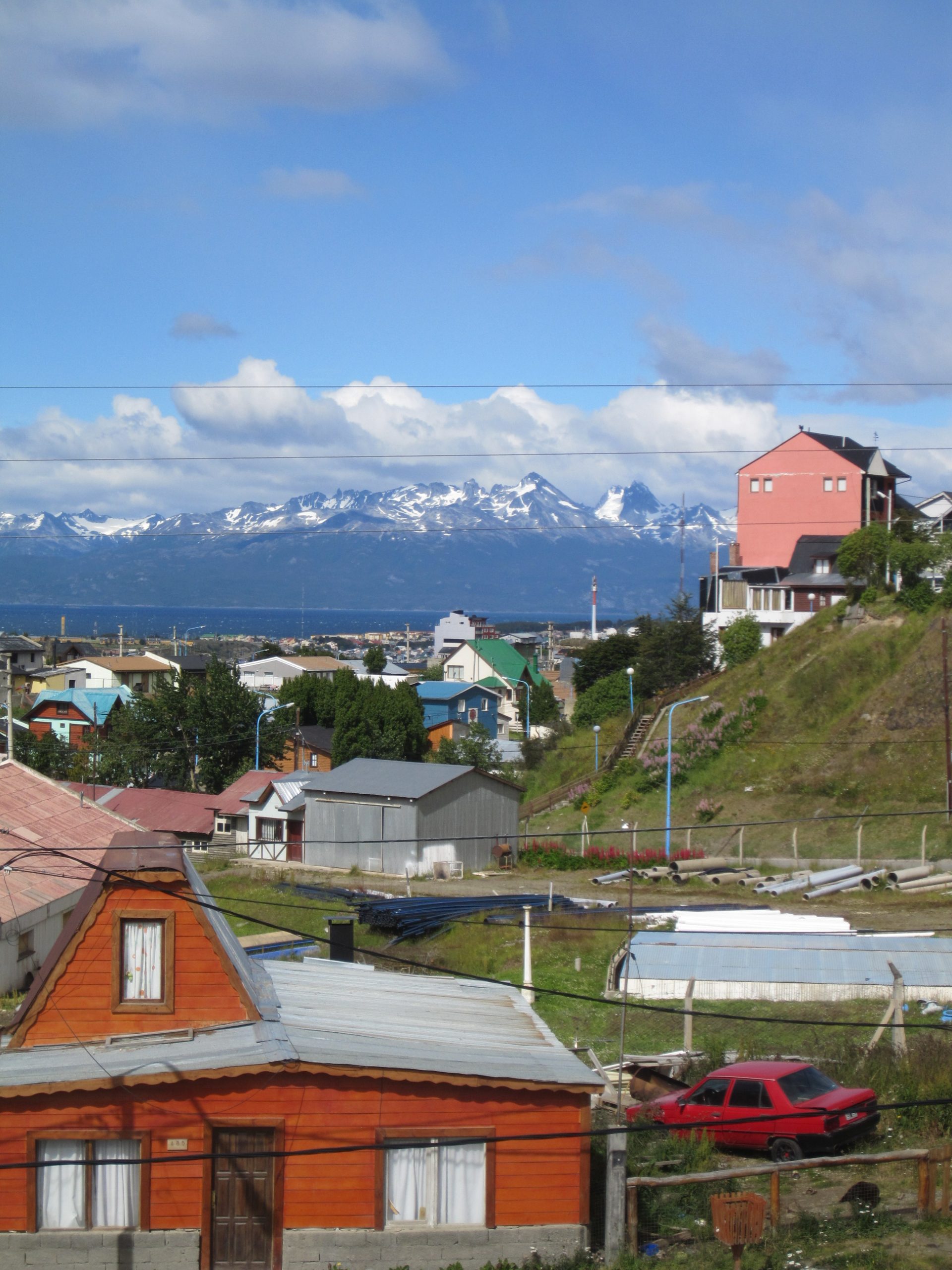 Alas, the cutouts were gone, although the spirit remained, but since spirit is notorious for photographing poorly we passed on trying. Besides that, we really only had time to go for some famous Argentinian steaks, and, thanks to the rapidly collapsing Argentine economy, take part in three separate – and varyingly sketchy – monetary street transactions whereby we eventually exchanged $US 1,500 for almost 60% more pesos than the official rate. Of course, the official rate jumped almost 30% in one day a couple weeks later, somewhat cutting into our sleazy profits, but not entirely. Not entirely.

Then a brief evening in Ushuaia, let’s just call it a city that sits really, really far south, much farther than almost every other city in the world, but not quite the furthest, staying in this posh hotel as part of our Antarctica cruise that we would never have stayed in otherwise. The next day we had until 4 pm before the boat was actually leaving so we headed up to Glaciar Martial, particularly of note as it was so close to a city, in glacier terms, and that it was possible to take a chair lift part of the way up then walk just another half hour or so for the wonderful opportunity to roll around in snow and such. In general, as Canadians, we are far less enamoured by the presence of snow than most South Americans, or Asian tourists (or I assume Haitians, because really, how could they not be?) so even though diving headlong into it and rolling around wasn’t necessarily my first instinct, the rest of them made it look like so much fun that I soon took my shot at it. Not amazing, but a decent bit of fun, with just a pinch of adrenalin, overall sort of comparable to belly-flopping off the low diving board, or maybe tripping a little kid on the beach. Good views, too.

Then we were off to Antarctica, yada yada yada, then back to Ushuaia, this time staying at a B&B more commensurate with our social standing and credit card colour, specifically Tango B&B, a place reputedly both a clean, comfortable place to hang your hat, and fully devoted to spreading joy through involuntary tango participation. 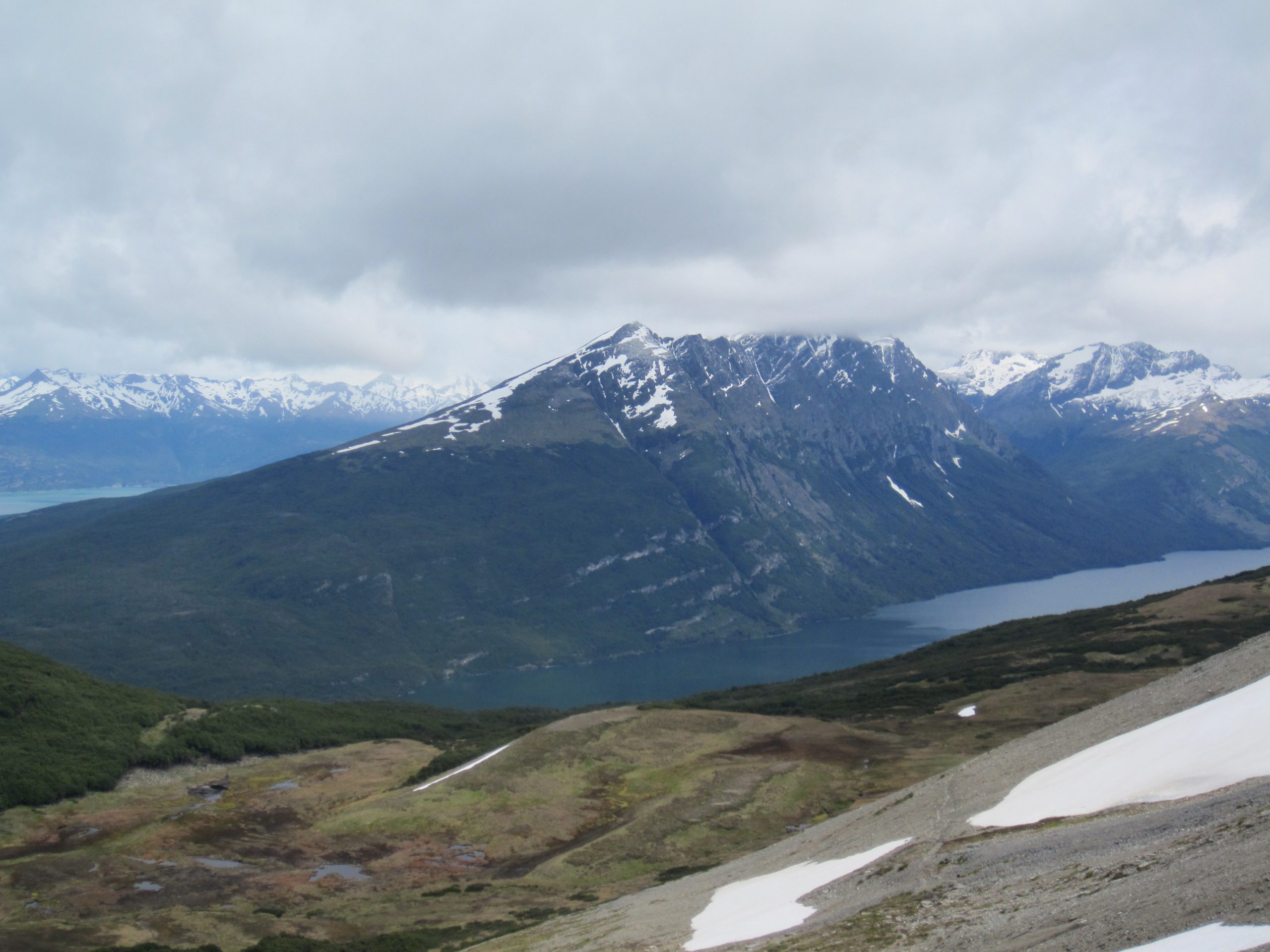 I often lose interest when I get to the small print, you see. Actually, despite three days of apprehension regarding the “special tango show” seemingly scheduled in our honour Monday night at 10 pm (just the absolute best time of day and week to convince Laynni to put her book down, get out of bed, drink some champagne and join a tango show), it turned out to be pretty entertaining and not nearly as frightening as we had assumed. Mainly because A) we weren’t the only guests there, and B) we didn’t actually have to tango, just watch, and C) it only consisted of the owner playing a set of tango music on his accordion (really well, I might add), not performing the sensual erotica of the famous dance with his equally elderly wife, who would have presumably been displaying an uncomfortable amount of thigh and clenching a slowly wilting rose between her teeth while we clapped awkwardly and kept our fake smiles grimly pasted on our faces.

As for Ushuaia itself, we kind of liked it, but were never quite sure, probably since it always seemed to be changing, weather-wise, of course, but also from block to block, restaurant to restaurant, and dog to mangy dog. Kind of ramshackle, end-of-the-world, outpost-y, with a lot of strange, run-down houses and abandoned cars, but then with a lot of fancy outdoor shops and carefully decorated gastro pubs. The first Irish pub we tried didn’t even try to look Irish, didn’t have Guiness, and in fact, only had two kinds of beer, period, and one of those was a dark beer, which left me sitting in the southernmost Irish pub in the world drinking Miller Lite. 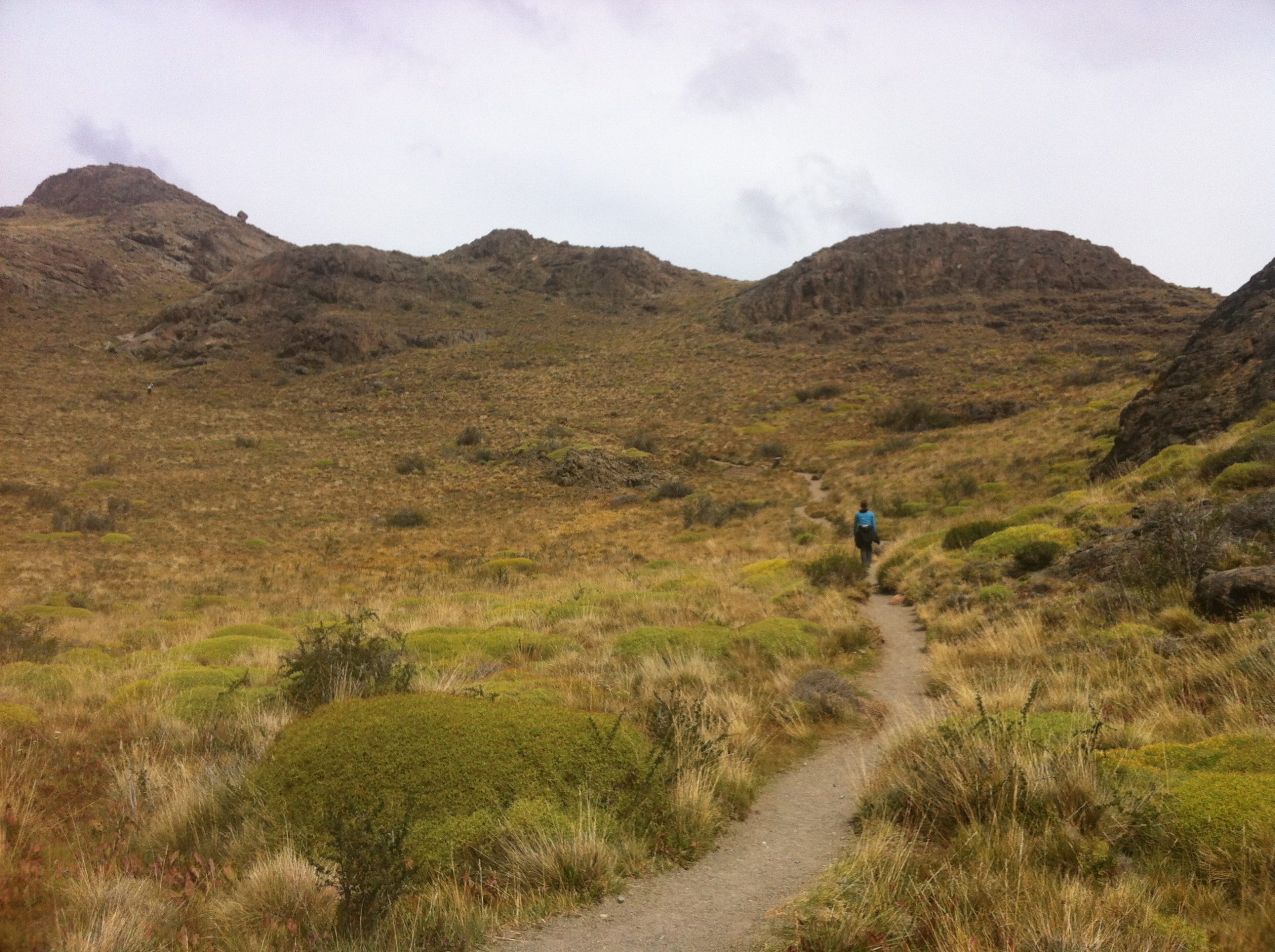 On the other hand, we later found another Irish pub that looked the part, felt the part, served an actual selection of different beers, and even had an absent-minded and disinterested waiter to complete the full Irish re-enactment.

There was no ambiguity about the natural surroundings, however. It is simply a beautiful place, surrounded by the Beagle Channel, mountains, lakes, and Tierra del Fuego National Park, where we spent a couple days hiking following our many days of getting token bits of exercise in brief moments between huge meals aboard the ship. An easy 8 km hike along the channel was a good start, although proved to be a bit much for Laynni’s lingering sickness, so she bowed out the next day, inspiring me to take on Cerro Guanaco, a difficult peak and mirador that, although still slightly under 20 km, also lovingly involved climbing almost a full kilometre uphill as well. Throw in half an hour of struggling through muddy bogs, then an hour scrambling up a steep embankment of loose scree, then the misguided idea that I could outsmart the laws of physics while descending by letting gravity have its way with me and running most of the way down, and it all added up to my legs being so sore I could barely walk for the next four days. I did see a fox at the top, though, so a little from column A, a little from column B. 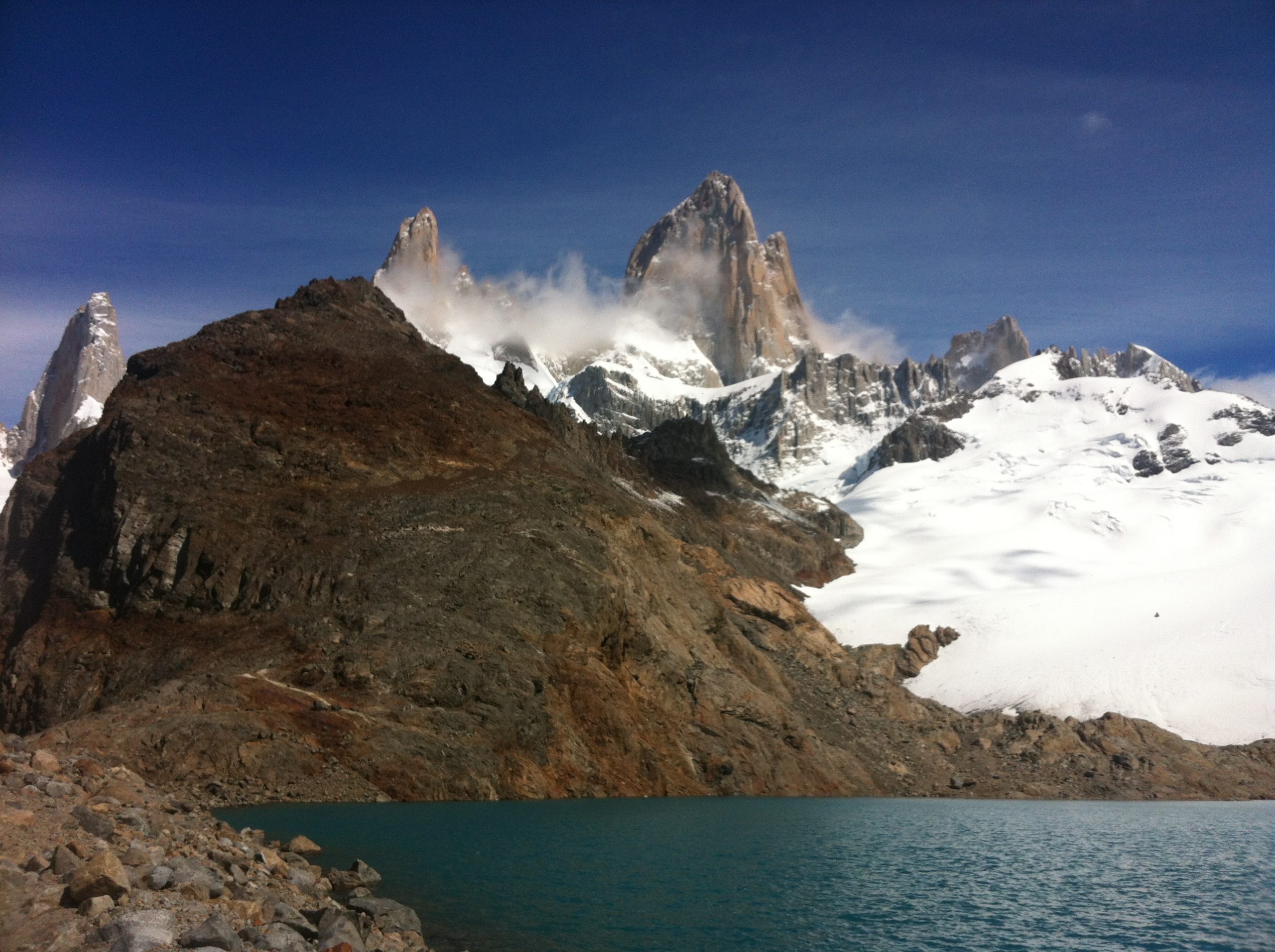 So, as if that wasn’t enough foot-powered exertion for us, our next stop was in a tiny mountain town known as the hiking capital of Argentina. Also the wind capital of Argentina, and from what I could see, also the toque and leggings capital of Argentina. Not the worst thing to be known for, at least from where I was leering, er, standing. A great place, we figured, to work on shedding our “ship weight”, as we had started calling it, much like a snake shedding its skin, or maybe a magician shedding his large cape to reveal a much sleeker red cape underneath.

We spent a full week in El Chalten, which was fortunate since Laynni was still not at 100%, which led us to leave the two feature hikes to the two feature peaks (Mt Fitz Roy and Cerro Torre) until later in the week when, lo and behold, the weather worked out perfectly (juuust perfectly) for us and we were treated to nearly unobstructed views of the first, and partially obstructed views of the second that really only served to add a little mystery and suspense, like a woman naked under a trench coat, or maybe a park ranger wearing only a life jacket and spanks. Of course, when I say “treated”, I mean, more specifically, hiked over 20 kilometres each on back to back days in order to spend a half an hour or so in their majestic presence before being chased on by the prevailing winds and sadly ineffective stone windbreaks amateurishly, although generously, constructed by previous hikers. 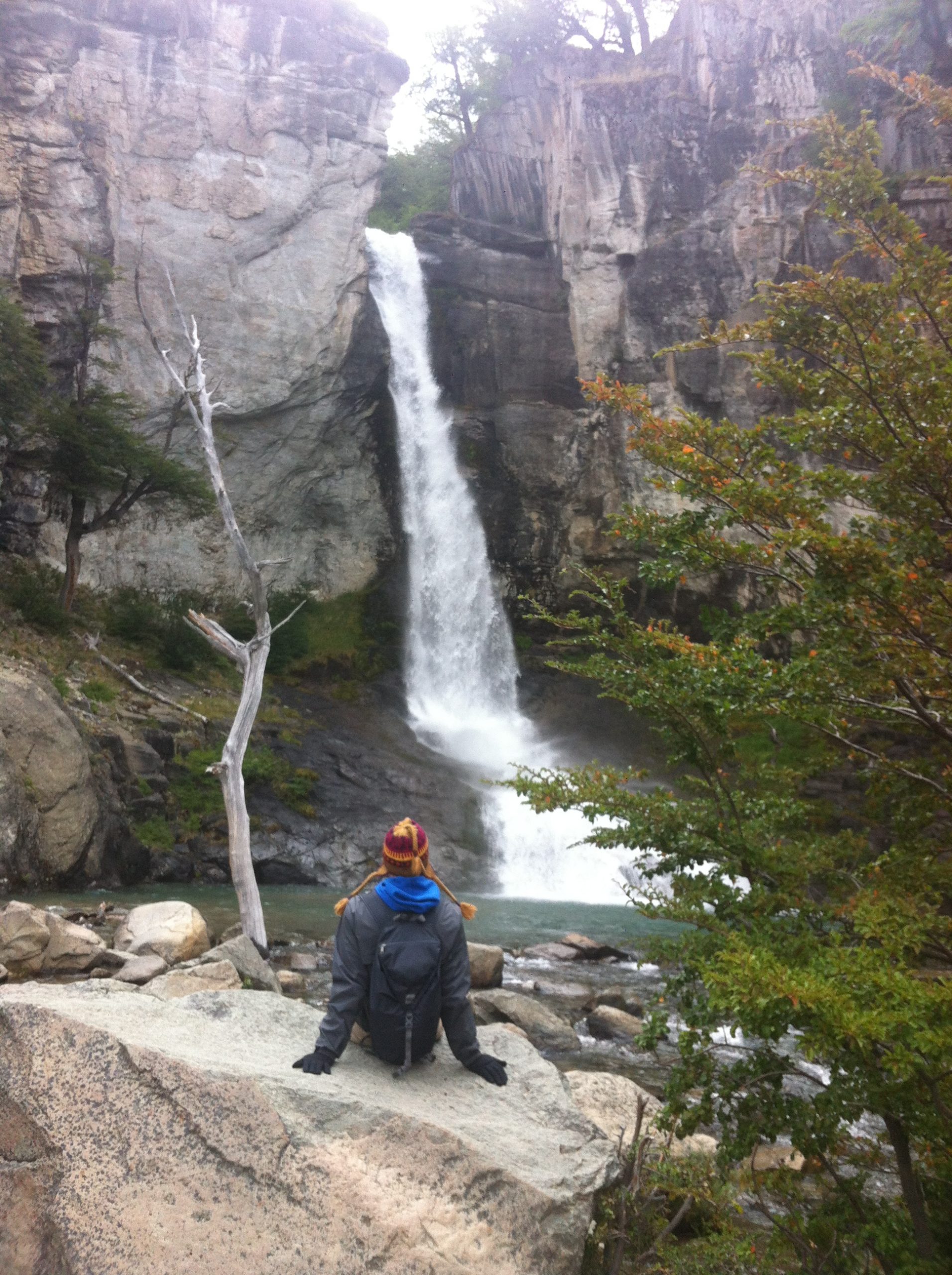 We also tackled some lighter fare – a couple viewpoints, a waterfall, the long walk to the other side of the long one street town to buy bus tickets, or to drink and eat with former Antarctica shipmates, slowly getting used to the oddly constant backdrop of people with backpacks, and more often than not, a puzzled look on their face, clearly wondering “Is it always this windy? How could people live like this? How many times would you have to wrap your scarf to make it truly feasible in a squall like this? How curious.”

Next up, Bariloche, a little piece of the Alps smack dab in the middle of South America. Supposedly.