The Galapagos Islands! Part of Ecuador despite being located around a thousand kilometres off the coast, this isolated chain of volcanic islands are famous the world over for their vast variety of wildlife, much of it found nowhere else in the world. Facts that weren’t as well-known, at least within the two person travel planning battleground that is our marriage, were just how incredibly diverse and scenic the islands are, or how quickly and powerfully one’s rectum clenches when facing an underwater sea lion charge. All in good fun, its impish expression seemed to suggest, although its grace, speed and ominous whiskers at least allowed for the possibility of something more violent and unfortunate. But I’m getting ahead of myself. The time will come for stories of playful mammals, bumbling bird life and lusty tortoises.

For now I will start at the beginning:

We had signed on for an 8 day cruise of the archipelago on this small yacht that would feature 13 other passengers, among them a trio of gregarious Italians, a pair of Swiss girls travelling solo (completely unbeknownst to each other), an Australian couple in the midst of a larger tour, a Danish couple, a pair of retirees from Hinton, AB, and even an adventurous couple from Prince Albert who may not be retired but do spend plenty of time discussing it, and who actually turned out to be Laynni’s parents.

Small world. Then a few switched out halfway through, trading our Danes, Aussies and one of the Swiss girls for three German guys and a couple from Toronto – a loss in the sarcasm department but definitely bolstering our sausage factor by a couple.

We were also led in all things by knowledgeable, ebullient Galapágan guide Rubén, and provided outstanding living conditions by an excellent crew of 6 boat staff including a capitán (obviously), a cook (naturally), a waiter/bartender (conveniently), 2 zodiac drivers/maintenance specialists (vitally) and one guy who took our lifejackets when we returned to the boat and laughed heartily most of the time (inoffensively). There were also a couple changes in staff partway through, but since it didn’t seem to affect the consistency of my desserts it didn’t register too deeply with me.

Our cabin was tiny but functional, much like my Honda Civic, and our bunk beds were comfortable but separate, much like Laynni and I’s opinions on most things. There was a fairly roomy dining room and lounging area where we took our meals, procured our alcoholic beverages and sat quietly and obediently through Rubén’s nightly briefings (“and then tomorrow, such and such beach, wow, what a beautiful beach…). Considering the tiny kitchen and minimal kitchen staff (i.e. a cook) the meals were exceptional and surprisingly diverse (as long as you count differently prepared fish as different types of meals, or are willing to eat ice cream more than once, check and check).

Besides meals, all too brief naps and spending hours sorting our seemingly infinite number of photos, our daily schedule was generally filled out by three main activities:

Incredible, and done far more often than we had expected (every day at least once, sometimes twice). The constant pruning was a small price to pay.

Frequent short journeys eight to a zodiac (an inflatable motorized dinghy) took us to enjoy the sights, get up close and personal with confusing geological anomalies and, when luck was with us, possibly spend an hour or so being escorted around Devil’s Crown by a pod of playful dolphins.

At least once a day we were privileged to set foot on one or more of the wide variety of Galápagan islands. Sometimes we strolled along beaches admiring long lines of turtle nesting craters, sometimes we wandered among vast numbers of sea lions, iguanas or several different varieties of boobies (a type of bird, perv), sometimes we swapped our newly purchased postcards for some old faded ones found in some random box in the bush, and sometimes we just stood around sweating feverishly.

Early on Rubén rightly convinced us (under the guise of a deftly guided conversation during which he made it seem as though we were making our own choices) that starting at the crack of dawn was the way to go when it came to excursions, and to finding the wildlife frisky and morning fresh, and not quite as likely to be doing their best imitation of a large rock, or scaly log, albeit a somewhat pungent one. As a result, most mornings found us crowded around the stern of the boat, bleary-eyed and dazed, struggling wearily to generate a level of enthusiasm appropriate to the magnificence of our surroundings and rarity of our endeavors.

Clad only in bathing suits.

Plus, there was the half hour well spent over lunch where we used a messy combination of Spanish, Italian and English to struggle through a long convoluted conversation with the Italians about bears. You simply can’t put a price on these types of amazing cultural experiences.

Then, after the 8 day cruise through the islands ended, when most people were quickly flying back to the mainland to move on to the next phase of their trip – the Highlands, the Amazon jungle, Macchu Picchu, KFC – we settled into a basic apartment just a block off the malecón in Puerto Baquerizo Moreno, San Cristóbal. In a word – hot. In a sentence – hot enough to make my ass cheeks squeak when I walk. Lots of sea lions, though. And the apartment had some useful fans, and even more useful air conditioning, plus a decent balcony great for watching people walking by literally wilting in the sun, and a fridge for milk and cereal. Strange town, businesses tended to be open about 2 hours a day, if that, and it seemed to be full of young couples wandering its three streets aimlessly, young dad’s with wifebeaters and flat-brimmed hats pushing strollers like it was Child Tax Credit day in Prince Albert.

Soon I will go into more detail regarding the wildlife and, in particular, the most exciting, the least exciting, and the most aromatically offensive. But for now here is a quick list of the main inhabitants we made it our daily mission to track down and leer at.

Crabs (mostly Sally Lightfoot, a few Hermit, and just the one Gordon Lightfoot, although it was just as folksy and iconic as we had hoped)

Rays (Manta, Spotted Eagle, Sting, yet not even one menacing Liotta threatening to whack somebody)

Starfish (thankfully only the underwater type, never the shape Laynni constantly advises one should imitate when falling down a steep hill)

Lizards (cute ones, is there any other kind?)

Tortoises (both big and small, domed and saddleback, promiscuous and “couldn’t be bothered”, alive and just Laynni inside a giant taxidermied shell)

Sea Turtles (all sorts, all of them uninterested in letting me pretend to hump them for a photo)

Not sure about the difference? Then this full turtle vs tortoise breakdown will come in handy.

So, if that wasn’t enough to get our camera snapping, Laynni’s anti-sun, pro-warmth snorkelling outfit slowly evolved from a t-shirt and shorts to her full-on black burglar outfit which, depending on who you asked, either made her look like a character from the movie Kick-Ass (which one I couldn’t begin to imagine), or Jacques Cousteau’s illegitimate niece. Or one of the spies in Spy vs. Spy. The black one.

Check out the Galapagos Islands Part 2! 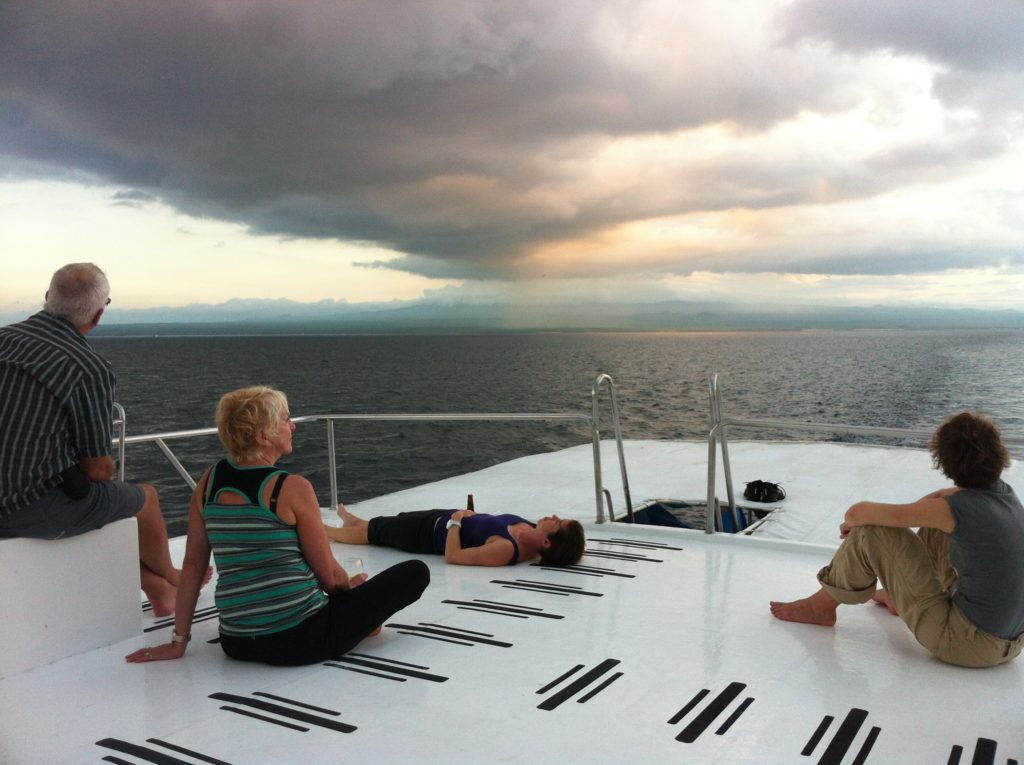 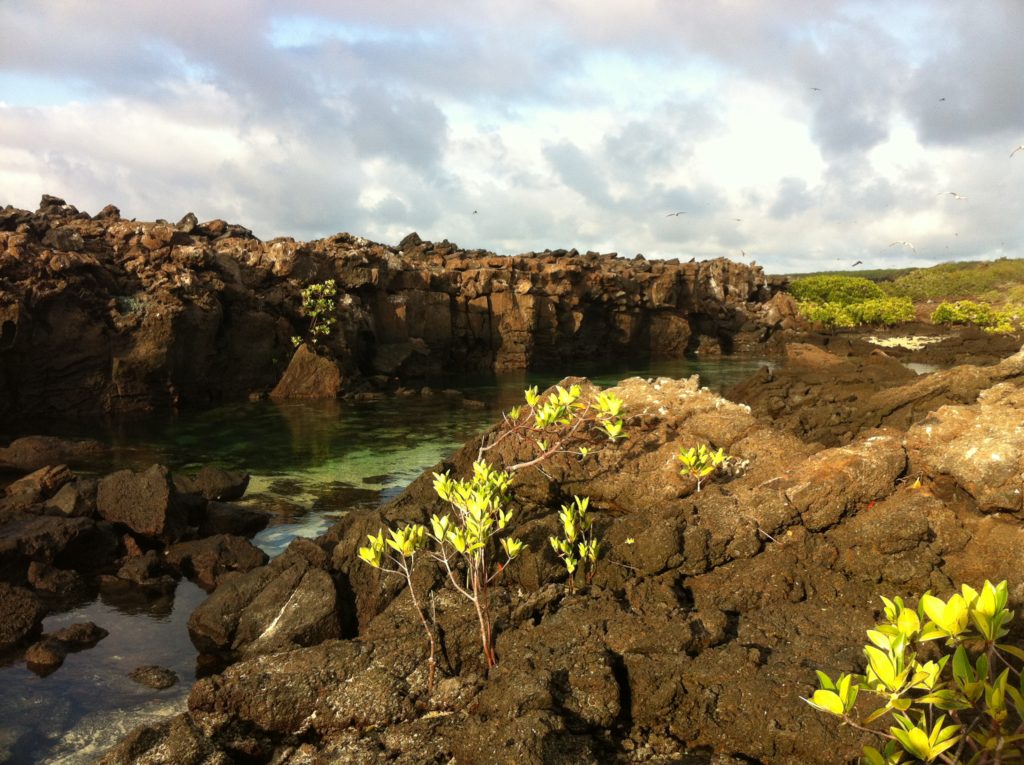 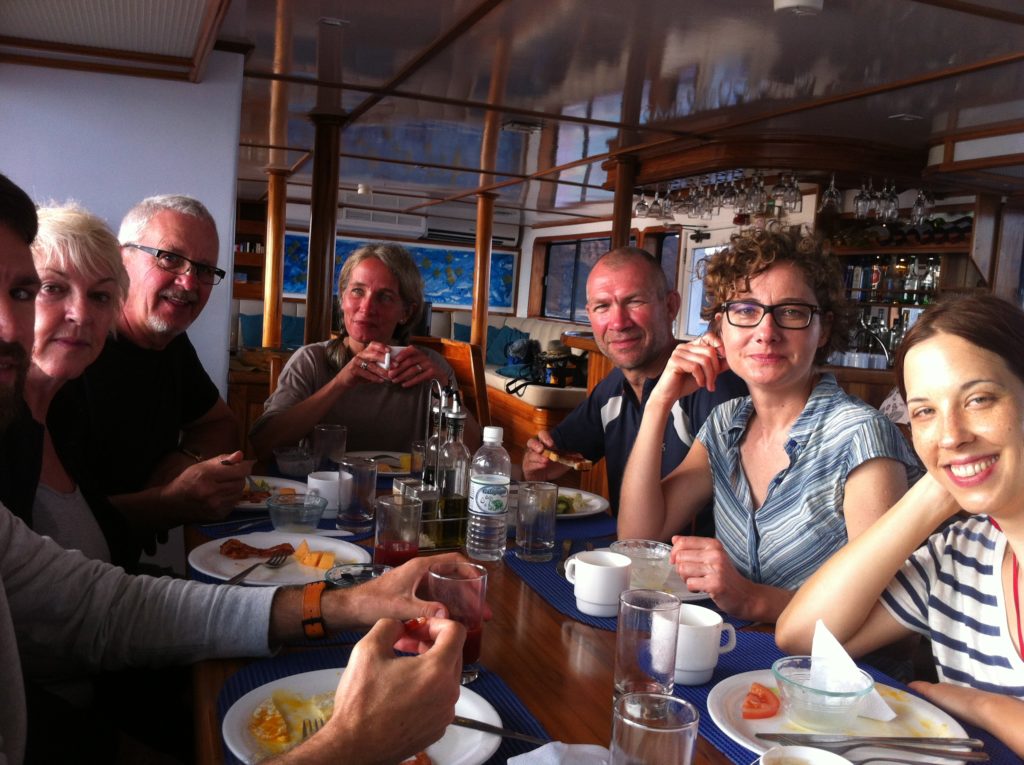 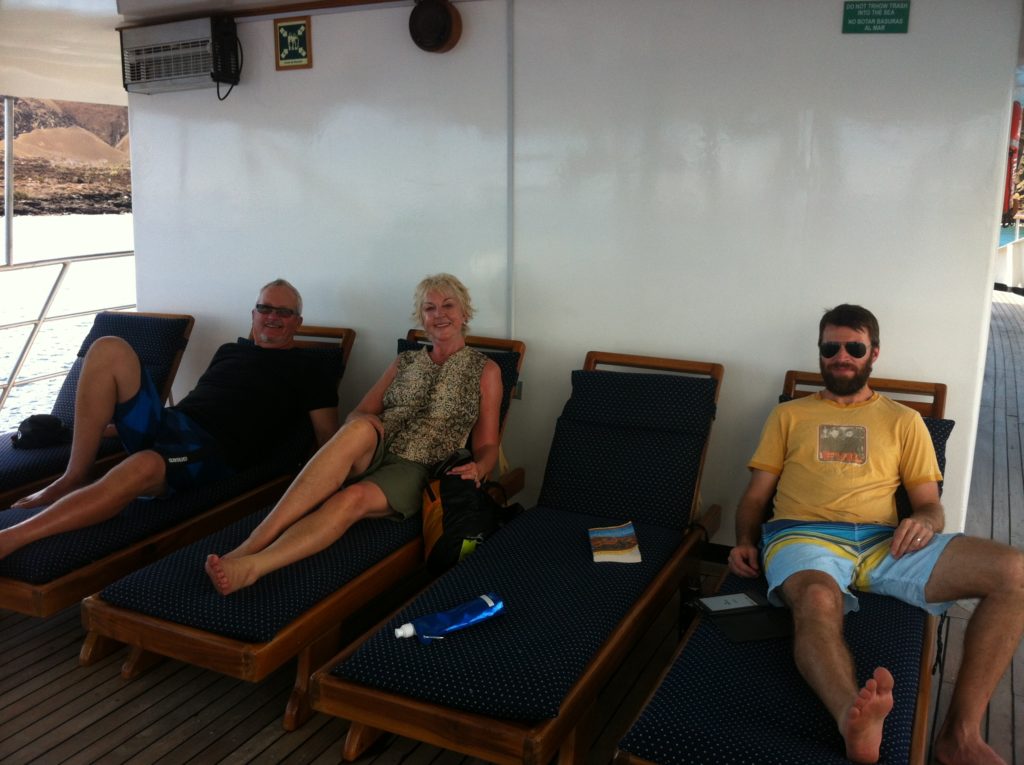 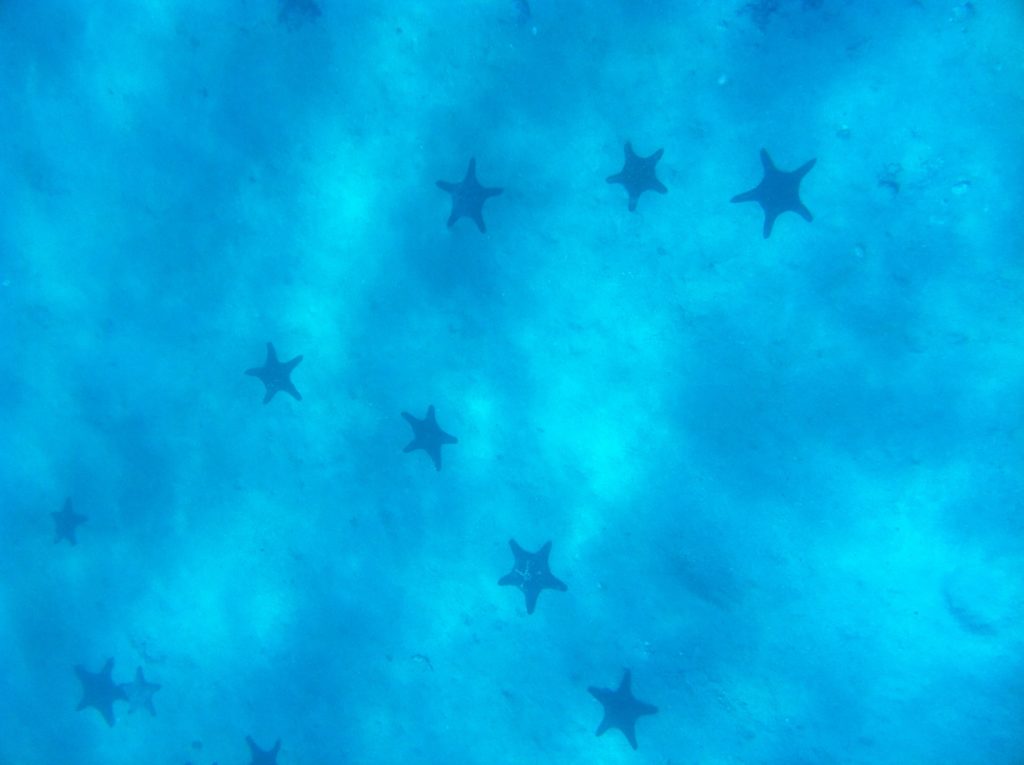 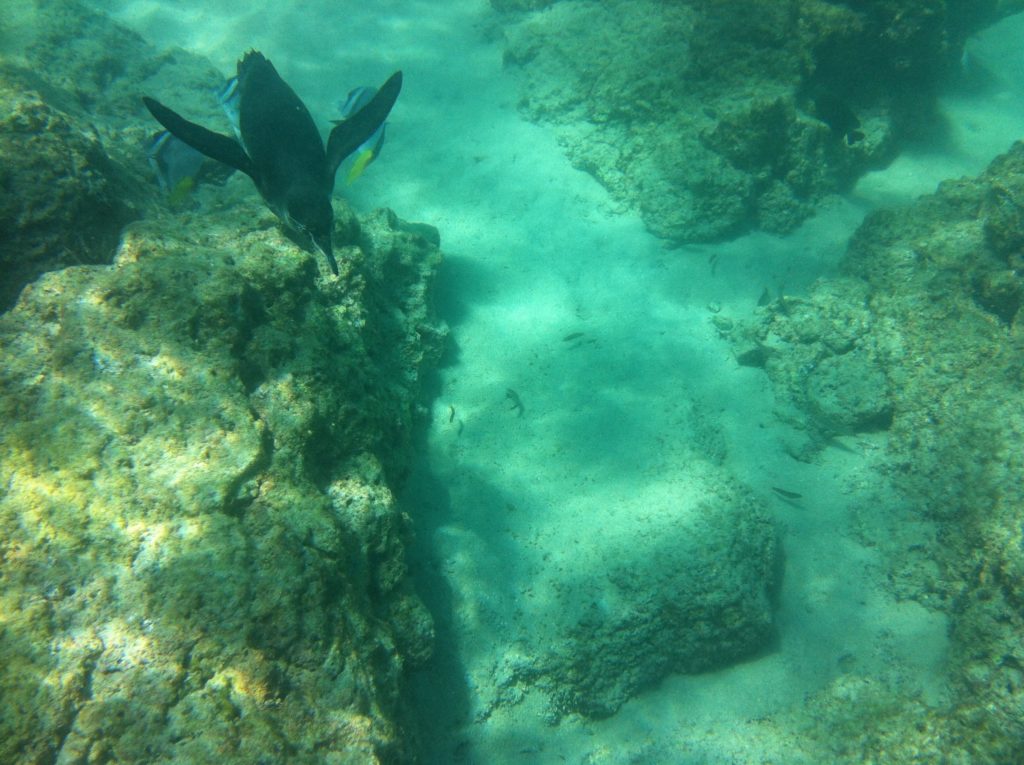 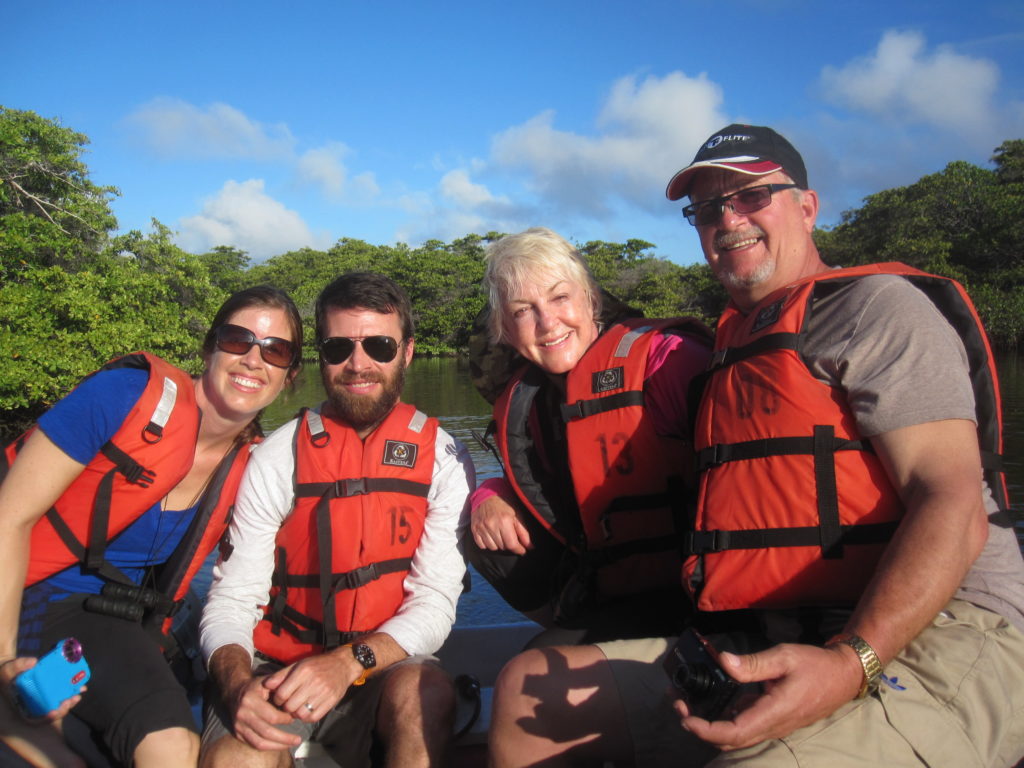 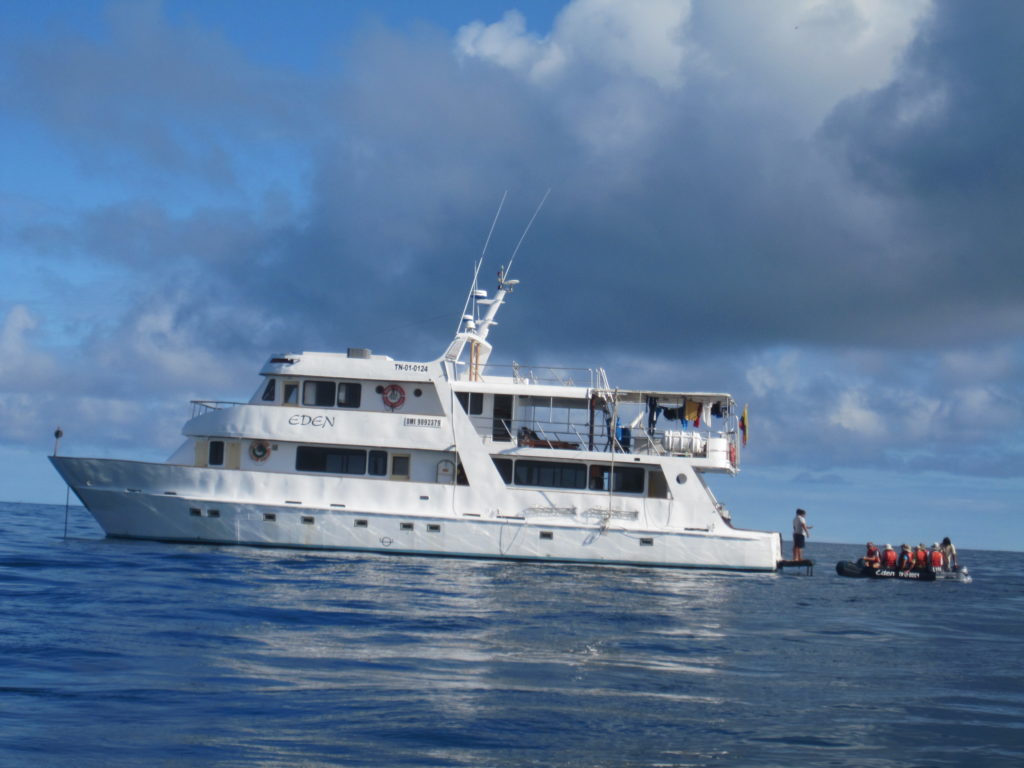 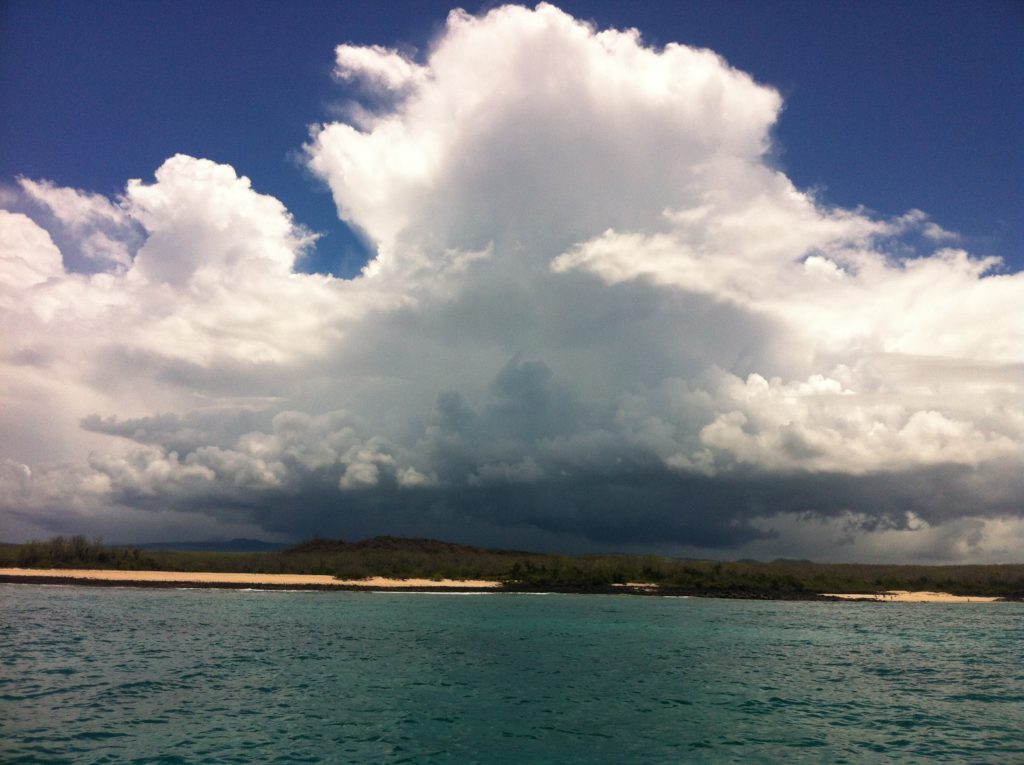 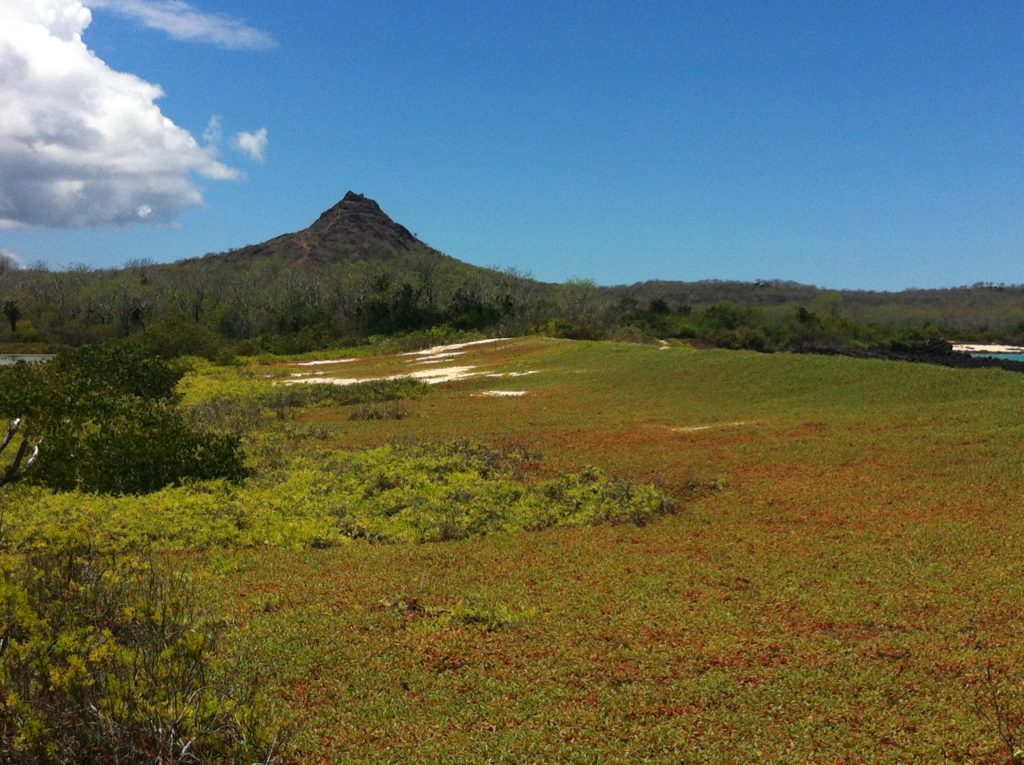 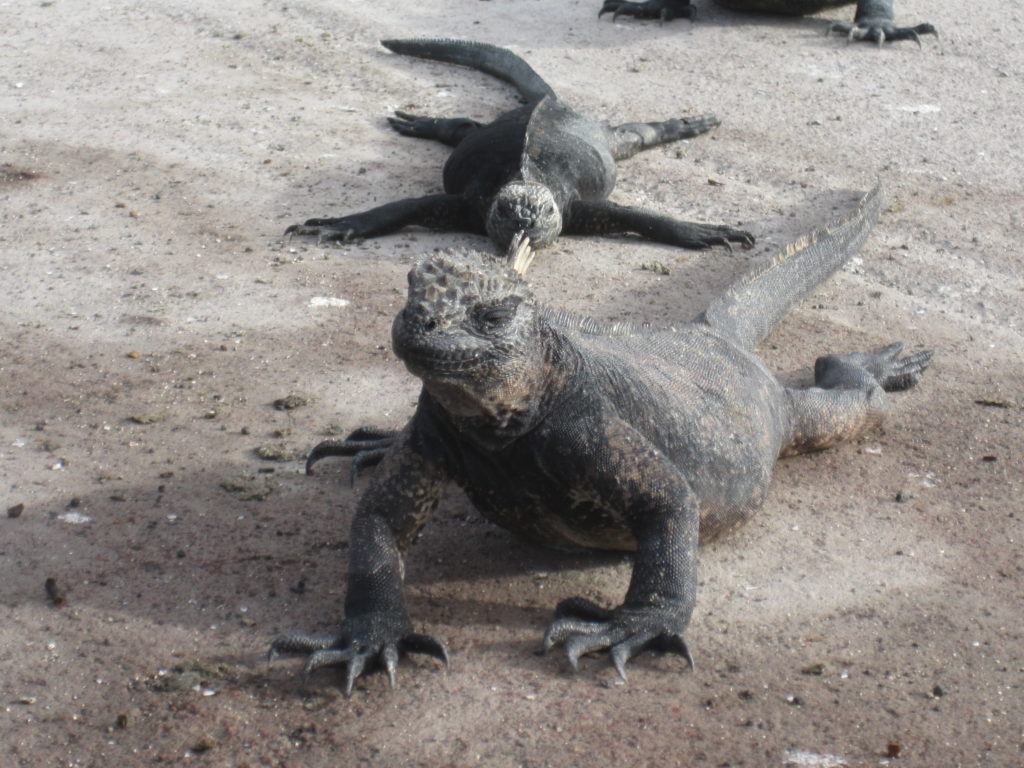 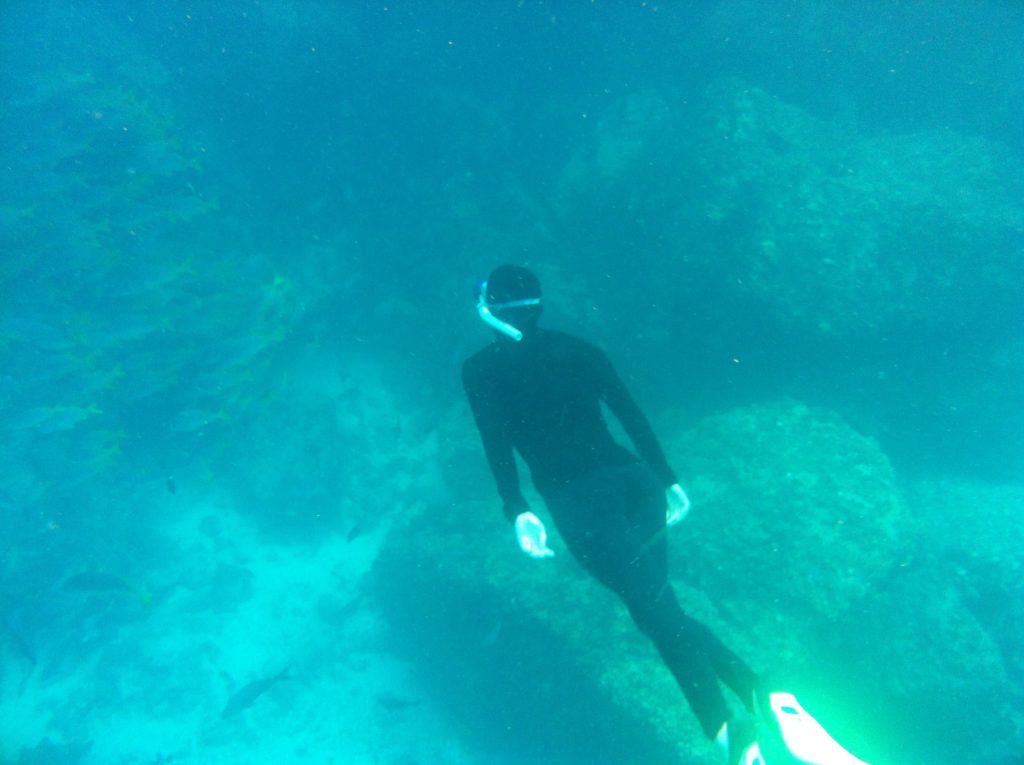 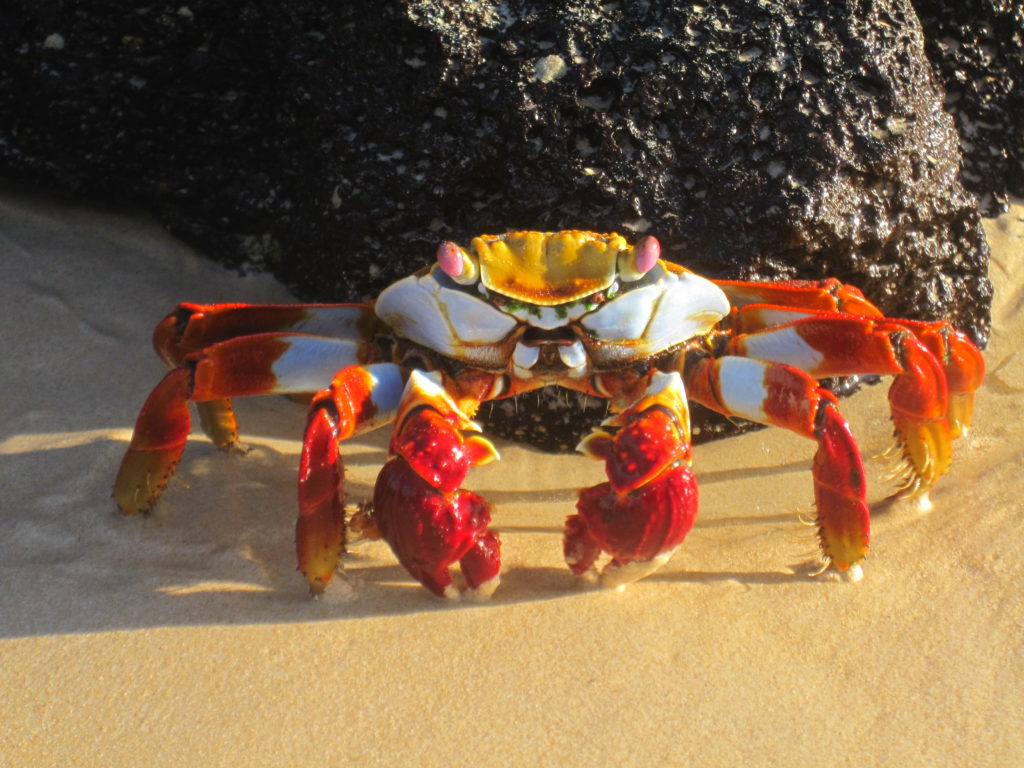 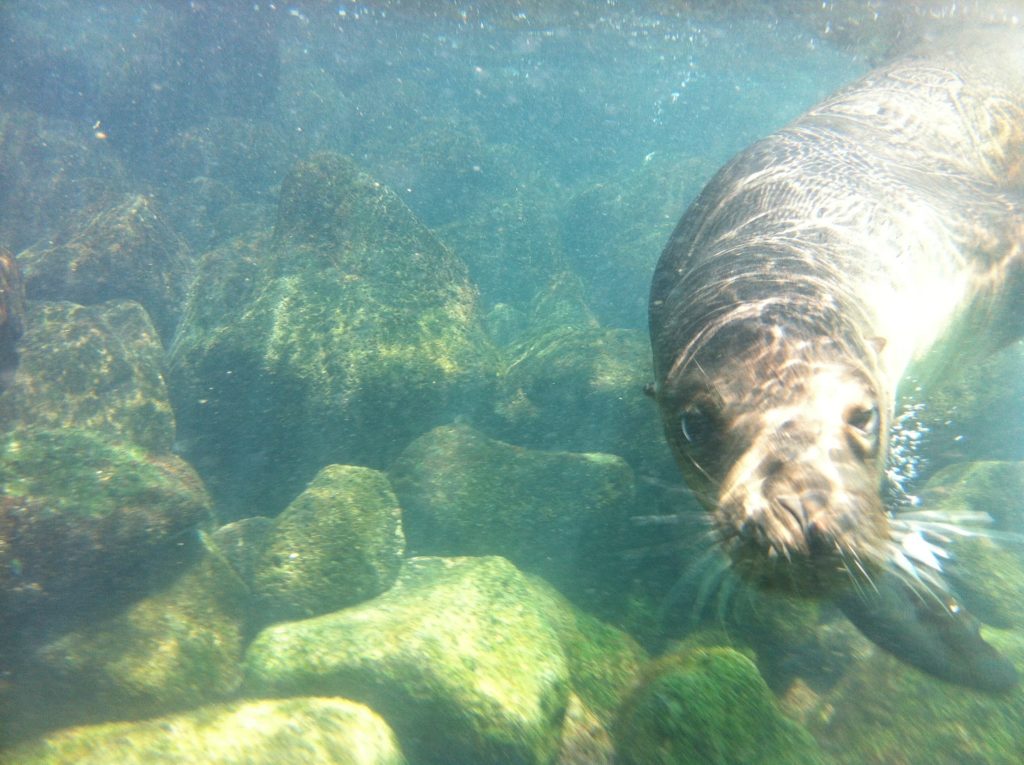