In Juayua, They Take Their Jesus Black

In central Guatemala City we suppressed a vague feeling of nostalgia as we slowly eliminated more comfortable bus alternatives (too early, too late, too much like a horse) and finally settled on a local chicken bus for our journey to the Salvadoran border. We were herded aboard a packed old Bluebird covered, as always, in bright colours, acres of chrome (the bus, not us) and dozens of stickers invoking God’s help and, as far as I can tell, passing unto Him all legal responsibility for the outcome of the trip. Bursting with people, produce and miscellaneous pandemonium (such as 8 hawkers in an aisle built for 2, or Colin Farrell at a high school track meet). Next stop, the Salvadoran border, where we were unceremoniously discharged a little less than 3 hours later. Thanks to the CA-4 agreement in place between Guatemala, Honduras, El Salvador and Nicaragua the borders have become more of a loose guideline designed to create jobs for money changers than any real impediment to Central American travel. In fact, after waiting as the 2nd and 3rd people in a 3 person line we quickly had our passports stamped out of Guatemala, fought through about a dozen guys making it very clear that you simply can not use Guatemalan quetzales in El Salvador – apparently, even the Juayua black Jesus won’t accept them – no, thank you, I don’t think so, thank you, we know, no we don’t need any dollars, no we don’t have any leftover quetzales, yes we already have dollars, yes, I do consider myself a “top”, although I don’t think heterosexuals really need to make that distinction. Finally, we walked (!) across the border where we were met by a pair of bored guys in uniforms loitering around under a makeshift tarp. I just need a place where I can be out of the sun… They wouldn’t even give us a stamp, possibly weren’t even authorized with stamping privileges, but just had a little flip through our passports, smiled a lot and gave us directions to the bus (over there!).

A quick pee in the men’s restroom (i.e. the Guatemalan side of the fence) and then we were off in a half-full microbus being loudly serenaded by a kickass selection of 80’s classics including “Nothing’s Gonna Stop Us Now” by Starship and “The Flame” by Cheap Trick (wherever you go, I’ll be with you…whatever you want, I’ll give it to you). Combine the music with the facts that El Salvador’s official currency is the US dollar and long distance bus rides start at less than 50 cents and you could have transplanted us to a small town in Kentucky in 1988 and we probably we wouldn’t have been able to tell the difference. Well, other than a conspicuous lack of Roger Rabbit apparel. Further on in El Salvador the 80’s music continues to be a definite theme, and right now I’d say Guns ‘n Roses has a slim lead over Huey Lewis and the News (happy to be stuck with yoooouuu) as the band of the Salvadoran highlands.

One more easy connection later and we found ourselves in Juayua by around 3:30pm. The day we thought might last forever, and end up messier than a Swedish taco party, worked out far better than we could have hoped. I guess that’s what happens when you live clean, and occasionally threaten a priest with a bag of old umbilical cords. Anyway, Juayua (pronounced why-you-ah, and from everything I’ve read the full official name seems to include that entire phrase) turned out to be an excellent choice. Envision me smiling smugly at Laynni, and her narrowing her eyes and calling me an idiot, just because she never disagreed in the first place – I take my competition where I can find – or manufacture – it. A cute, manageable little place with really friendly people and a cooler mountain climate that, along with a rousing weekend food fair, draws good crowds from San Salvador. Well, to be honest, I’m sure that most people come to see the tired old lion with the bulbous foggy eye (which, to be honest, was actually a little creepy, kind of like red-headed nuns, or really small ponies), but the rest is a nice bonus. Like finding a naked picture of Sylvester Stallone’s mom in a box of Cheerios.

However, with Easter being the biggest holiday of the year in Latin America it is hard to differentiate between what is normal and what is simply a special holiday extra. For example, the raucous outdoor church sermons with concert-quality speakers, plenty of dancing and enough righteous wrath to make even Ed Begley Jr. nervous. Normally you could probably just replace “outdoor” with “dingy” and “concert” with “bathroom” and leave it at that. Thank you, Semana Santa.

The central plaza was lined with food stalls selling everything from steak, ribs and chicken to ice cream and shrimp. It is actually very similar to the Taste of Saskatchewan except that the vast majority were women visiting from the capital in tight jeans, high heels and big sunglasses as opposed to our version, consisting mainly of sun burnt males with backward caps, wife-beaters and neck tattoos casually scouting out a spot in the grass uncomfortably close to one of the groups of 15-year old girls dressed like Kindersley hookers. Large groups waited their turn in the impressive cathedral to see the controversial black Jesus of Juayua. You know what, I realize I just added the word “controversial” on my own, out of the blue, I never heard that anywhere. What’s that say about me? Anyway, the visitors gaze solemnly for a respectable amount of time before filing out, chuckling quietly and feeling vaguely naughty, as though they had just found a topless photo of Lee Majors in their dad’s underwear drawer. The streets a little further from the square were lined with stalls selling pupusas (tortillas filled with cheese, beans and fried pork fat, which would make it similar to a sausage mcmuffin without slightly less risk of imminent heart failure) for 35 cents and large bags of sliced fruit (papaya, cantaloupe and mango) for 25 cents.

All this commerce and revelry was interspersed periodically by drunken shirtless men who seemed to be trying to beg for money, food or booze, if only they could form the words, and as the days wore on started to blend remarkably with the local stray dogs. The dogs were probably a little more coherent, though, and also managed to look a bit more natural when peeing on tires.

For a number of reasons: simple choice, the influence of the Salvadoran workforce in the U.S., some historical, which I won’t get into right now, both because I’m unclear on the details and because I generally prefer wildly inaccurate speculation, the people in El Salvador (in our admittedly small sample) don’t dress nearly as traditionally as those in Guatemala, particularly the ones we saw daily in the highlands around Lago de Atitlan. In fact, if we may express our personal opinion without causing too much offense, we discussed it at length and have decided we would describe the way the Salvadoran women, in particular, dress as, excuse the technical term, “hoochie”. Think of some 17-year old girl that you know, now picture what she wears to a movie on Friday night. Ok, now stop thinking, no, I mean it, especially if she’s the daughter of someone you went to high school with. Now imagine that outfit on a 34-year old mother of 3 eating ribs on a park bench. As Laynni so eloquently put it, “You don’t really see any traditional clothes, but there’s no shortage of muffin-top”.

One of the reasons we chose Juayua was because it is on the “Ruta de las Flores”, a stretch of nice little highland towns in an area famous for, of course, flowers. At this point in the dry season there really aren’t that many flowers in bloom, unfortunately, although this is more than made up for by the hundreds of delightfully flower-covered lamp posts and road signs. In Juayua we hiked less than an hour to a set of three surprisingly impressive waterfalls (considering it’s the dry season) where we were able to swim, frolic and test just how far Laynni’s changing under a sarong skills have fallen since their hey-day when she had gym passes for the “Y”. In nearby Apaneca we hiked up to Laguna Verde, a scenic little crater lake surrounded by steep hills, weedy shores and kids with sticks. A little further up the road we spent a morning visiting Concepcion de Ataco where nearly all the buildings are painted in colourful murals, the locals relax on sidewalks waving happily as you pass by and, for whatever reason, having lunch at a local hostel qualifies you for a free tour of a hotel room, and they won’t take no for an answer.

Maybe the best part of our stay was Hostel Anahuac, a friendly and social little place where the kitchen and TV were communal and there were plenty of hammocks, American tabloids and drunk backpackers to go around. I’ve rarely seen so much work put into the decoration of a $25 hotel room, but we certainly appreciated the bizarre combination of tree stump tables, giant decorative wall-guitar and miniature treasure chest (we speculated that this was a place intended to keep important papers, or possibly a mango). The only downside was the occasional noise problem, led first and foremost by a flock of local pidgeons who liked to visit around dawn each morning, landing on the sheet metal roof with the thud of a full diaper hitting the bottom of recently emptied garbage, if that diaper had loud claws and a dim sense of self-preservation. I was torn on which was worse, the sphincter-tightening thump, or the half an hour of scrabbling around that followed, like a pack of resourceful gnomes cutting their coke into lines with tiny razors. Laynni, on the other hand, just read this and said, “What pidgeons?”

Once again, we were sad to leave (maybe we need to explore why we keep leaving places we like) but are now in another, somewhat similar, little highland town in Eastern El Salvador called Alegria enjoying all the various Easter festivities, such as deep-fried food and plenty of Catholic skits involving a white Jesus, but black Steve Martin. Go figure. 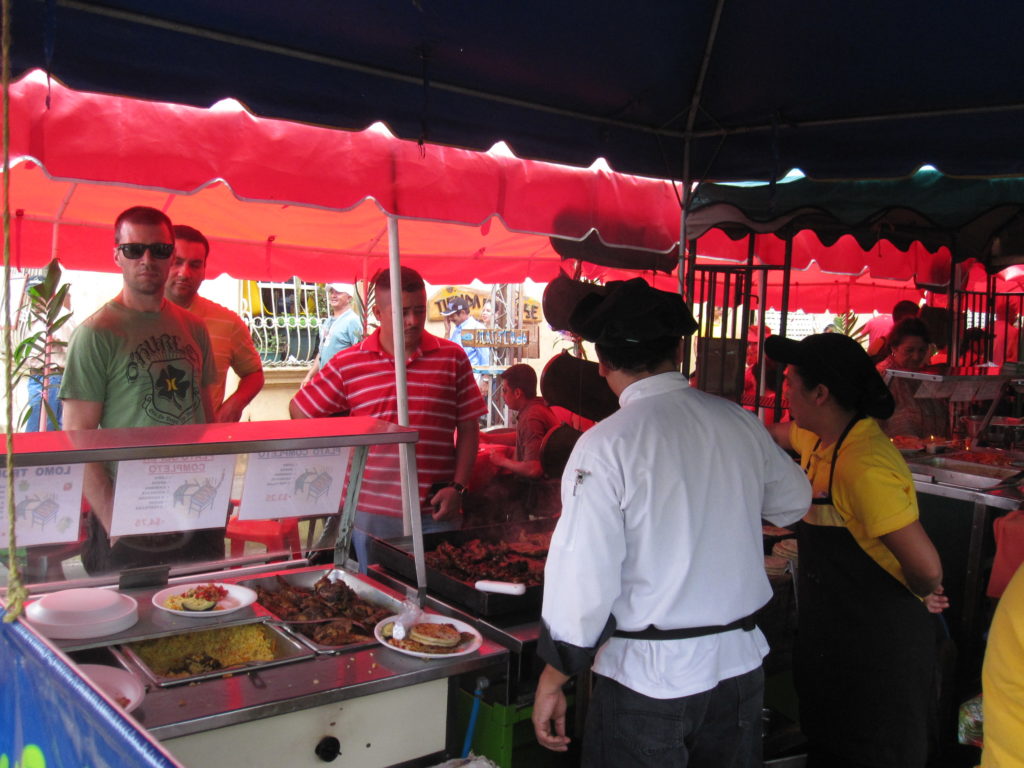 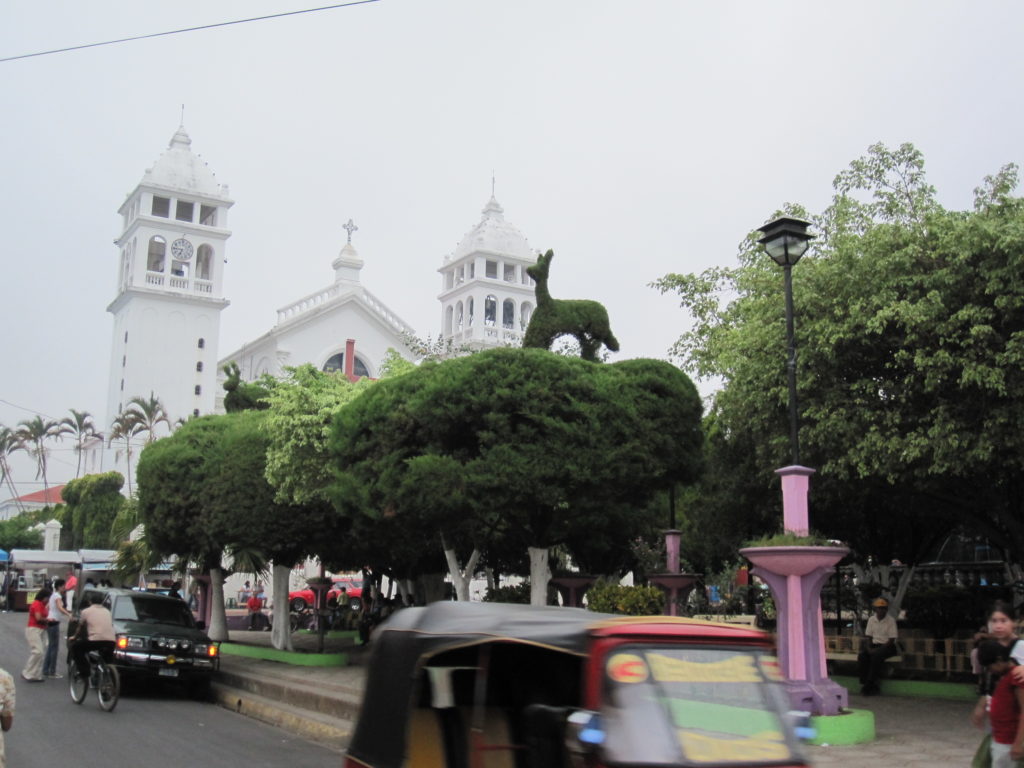 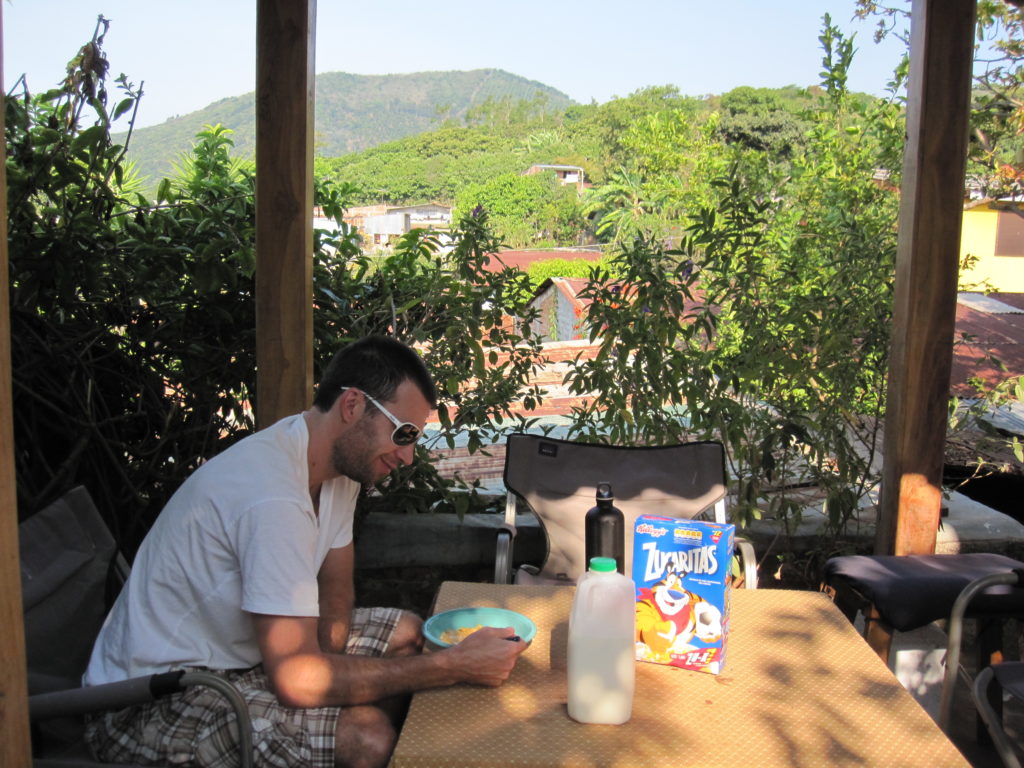 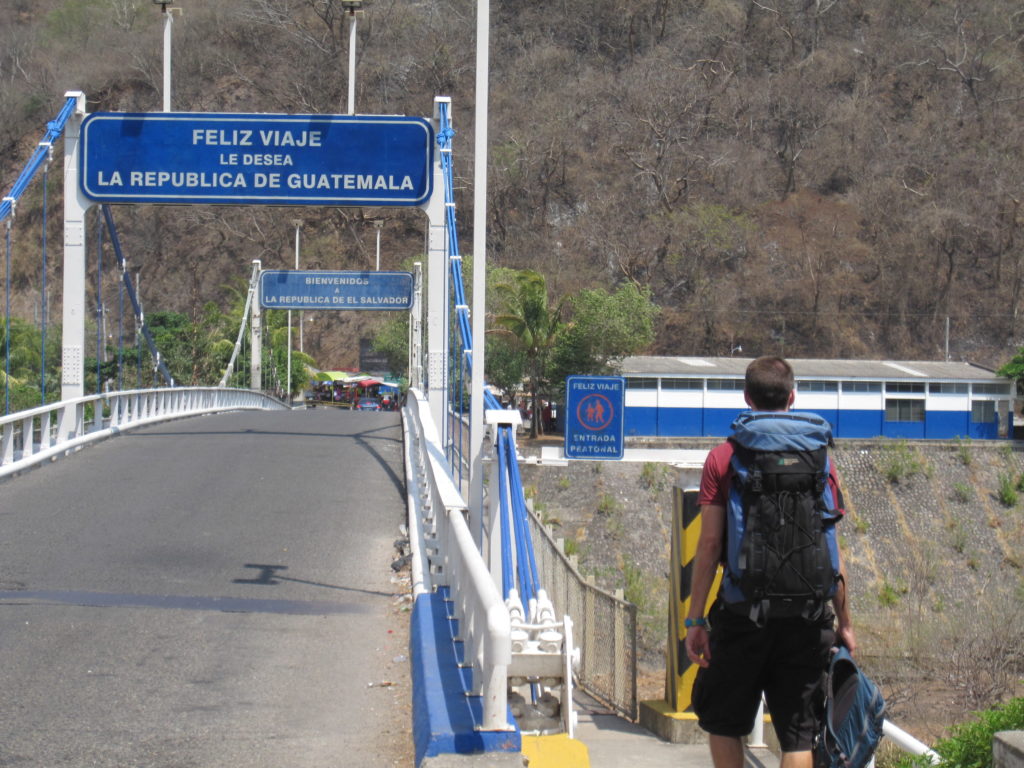 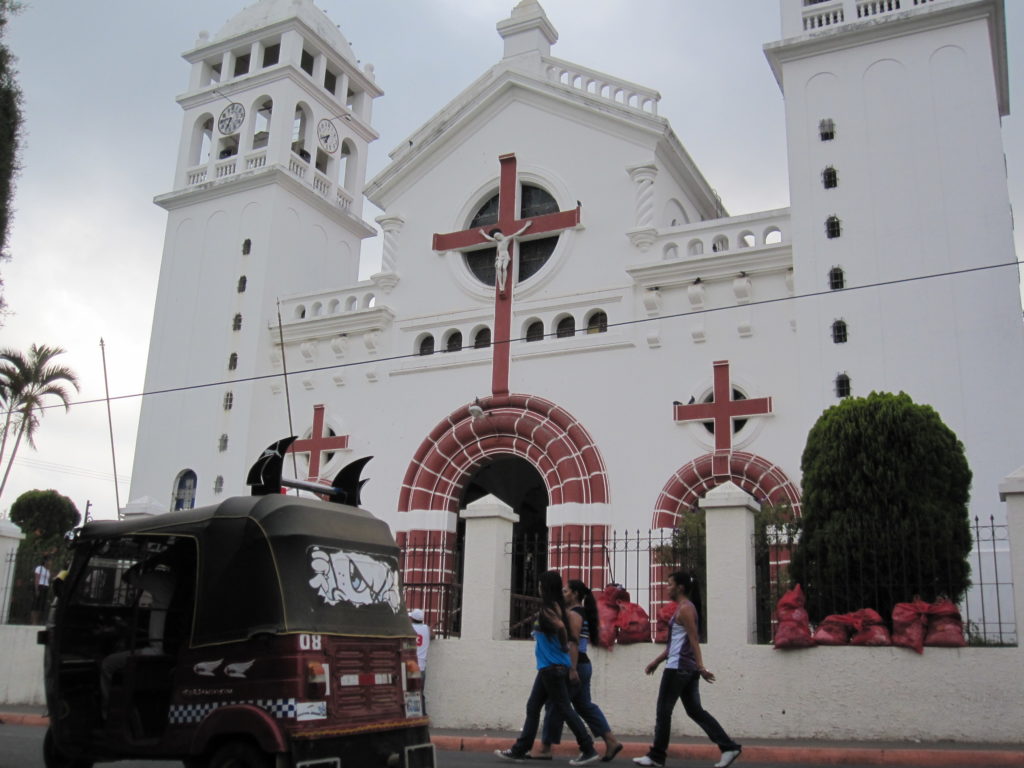 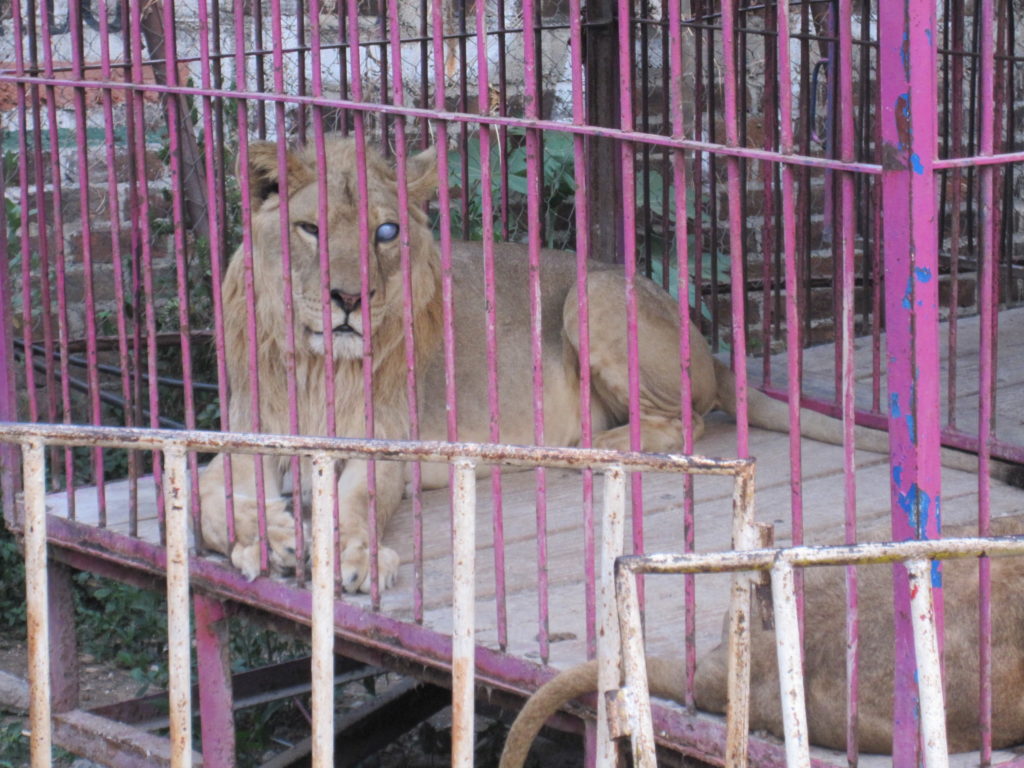 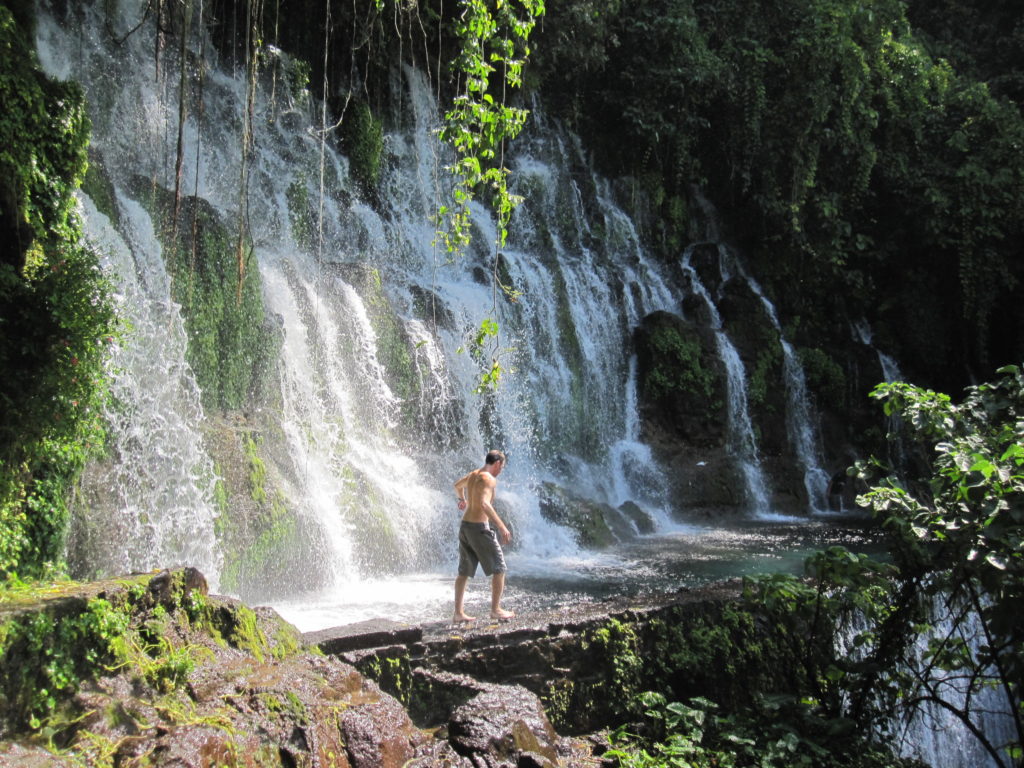 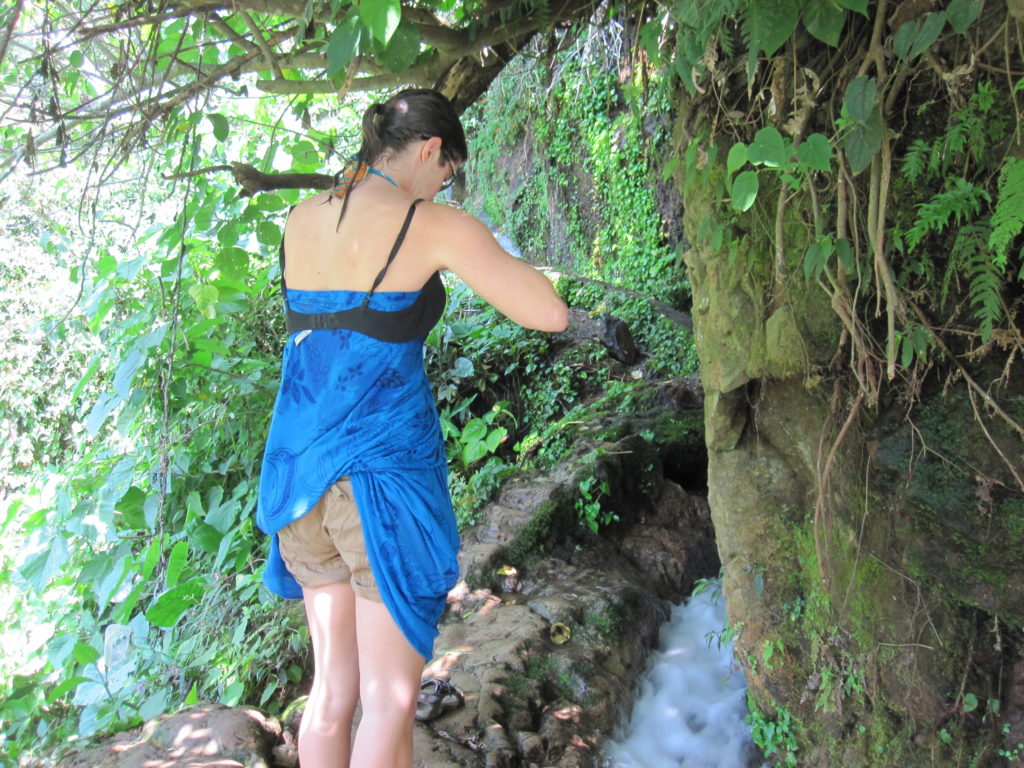 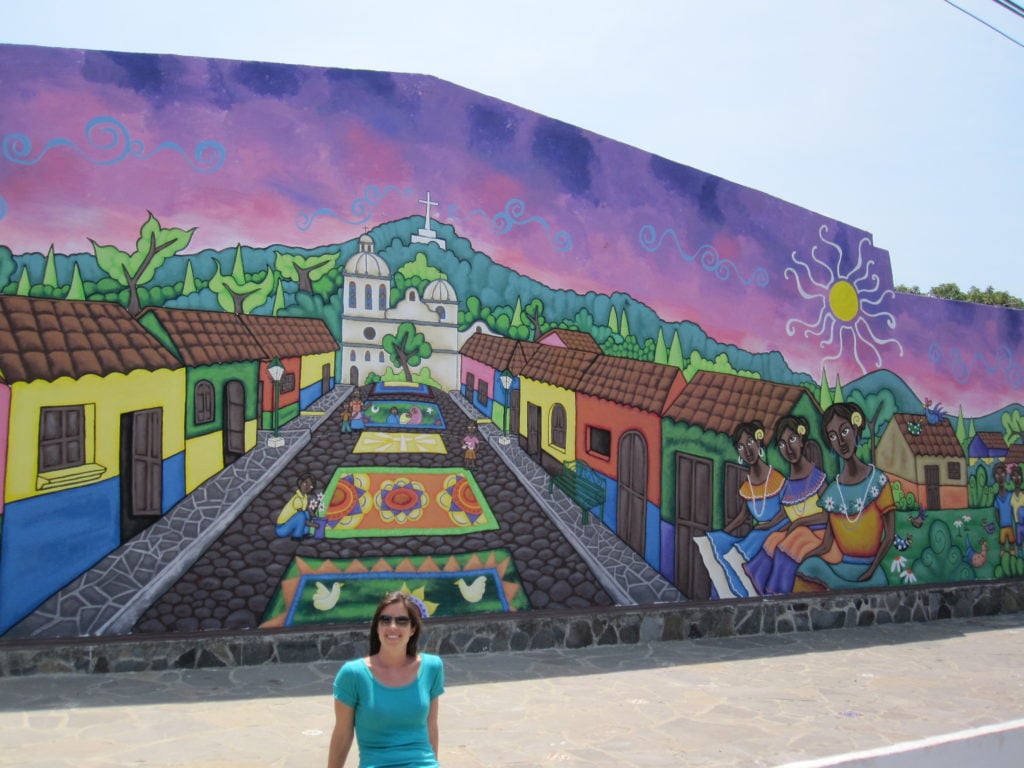