Welcome to 2015, where what is old is new again, and where we are no longer new but yet again marginally older! Once again starting a long trip in Bali, in particularly backpacker mecca Kuta Beach, famous the world over for year-round surfing, all-night clubbing and possibly the most impressive range of knock-off surf wear this side of a Chinese sweatshop. I’ve been anxiously awaiting this trip because a) Bali was fairly awesome the first time, and b) I can’t wait to see how different (or the same) it is compared to when we landed here nearly 15 years ago, fresh-faced, newly married and still wonderfully oblivious to the horrific challenges of squat toilet usage that lie ahead. Bali was our first stop on our 7 month epic journey around Southeast Asia starting back in September 2000, the “drop it all, quit our jobs, sell the little 94 Ranger with all the really cool stickers” trip that slowly but surely changed our big picture outlook from finding a job with good enough pay and a decent amount of vacation time to travelling as our main priority and working just enough to make that happen at any given time. Since we are now going on 7 years (March 1) since our last meaningful employment, I think it is safe to say mission accomplished (assuming that mission was professional vagrancy).

As for Bali, well surfing is still all the rage around here, although no surfer with more than a few hours of shaky gliding on the messy remains of some 6-footers to their credit would be caught dead surfing Kuta’s overcrowded beginner breaks. Of course, that profile fits me practically to a tee. However, over the course of our few days in Kuta the wind/swell combinations weren’t particularly ideal (fairly normal for this time of year), with strong tailwinds leading to a messy jumble of varying-sized waves that looked difficult to time, and even worse to paddle out through. Plus, far more disappointingly, and possibly due to the wind direction as well, was the amount of trash being swept into the beach, certainly enough to make a mess of the miles of otherwise idyllic sands, and occasionally so much it could even be seen from shore coasting beachward among the waves – mostly plastic bags, water bottles and horribly ubiquitous plastic cups they use here for everything from water (cup by disposable cup, very eco-friendly) to juice to yogurt. All in all, the prospect of subjecting myself to the trash (and worse things that are almost certainly in the water as well) for those mediocre waves wasn’t really all that tempting. Hopefully I will be able to track down a better spot later in our stay in Bali, someplace still very beginner-friendly but maybe a little less “under the Jersey boardwalk” in terms of cleanliness. On a positive note, one morning we did encounter a 50-person strong clean-up crew working its way along the endless stretch of sand (and equally endless stretch of flotsam, jetsam and trash-sam), but between the unfavourable winds and unhelpful beach-going hordes making their considerable land-based contributions on a daily basis, they were fighting an uphill battle. Sad to see, really.

As for clubbing, well, the short answer is that there was none. Not that I had ever had any desire to partake, but Laynni for some reason had gotten it into her head that this was something we needed to experience, being such an iconic part of the Balinese experience for so many 21-year old ecstasy-riddled Aussies and all, never mind that we couldn’t quite manage it the first time around when we were still at least in the age ballpark, or that she routinely turns into a whimpering, frowning adult version of a child whose day at the pool has just been cut unexpectedly short anytime she happens to find herself awake past 9:30.

At least the last part, namely knock-off surf-style clothing, definitely hasn’t changed, as you can’t swing a cat without hitting three males under the age of 30 wearing their hat backwards (and just that perfect amount to the side) and a tri-colour Hurley tank top with a small chest pocket. Feel free to mix and match the colours, however, in order to express your individuality. Or, if conformity is more your thing, simply mix in a pair of name-brand shades, an armful of wrist decoration, two fully tattooed arms, one tattooed leg and something strange and vaguely disturbing permanently etched into your neck that was presumably meaningful to you at one time in the midst of a foggy, judgement-impairing hangover, and you will immediately find yourself blissfully indistinguishable from anyone else in the cheap guesthouse or pub of your choice.

The tiny little alleys that pass for “streets” in this area are still very similar, with hundred, probably thousands, of shops and restaurants stacked together in haphazard chaos. Maybe the single biggest difference in Kuta between then and now is the way all those hundreds of internet cafes that existed back around Y2K have now been seamlessly converted into tattoo shops. Not even in Pattaya, Thailand, generally accepted to be Southeast Asia’s Headquarters of Sex, Drugs and Miscellaneous Bad Decisions, could you find more places to permanently embellish your body. Yet somehow there are still more than enough scowling smokers in DC hats around to make sure each shop is ornamented with at least 4 or 5 lounging around the door, presumably in hopes of making their shop seem somehow even less appealing to the average passersby. Also in apparent homage to Pattaya, the proliferation of massage parlours is quite startling, although they have not yet thrown pretense to the wind, by all accounts remaining perfectly legitimate, spa-type enterprises, which I’m sure many are, but based on the occasionally lewd tone imbued into the seemingly innocent word “massage”, and the way the girls loitering out front, all suspiciously easy on the eyes, were always so polite and demure when Laynni and I were together, but suddenly folded their smiles into smirks when I was alone, and sometimes even grabbed my arm as I passed, if only to warn me about how tired I was looking, and just how much I seemed in need of some relaxation, I have to suspect that some were not entirely forthcoming about the entire range of services they provide.

Anyway, moving on – our hotel was pretty great this time around, a considerable upgrade from the airless concrete boxes we tended to gravitate to back in 2000 (chalk it up to rising travel budgets and falling cockroach tolerance levels). Nice pool, big bed, breezy terrace, air-conditioning that served as both blessing and curse – blessing in 30+ temperatures, curse in the way it never fails to wreak havoc with our sinuses when alternated repeatedly with the 100% humidity of the great outdoors. The Kuta sunsets are still world-class, there are still little hints of Balinese culture that peak through here and there (like the flower offerings placed not only in temples but also in all sorts of unusual locations) and in general prices are still very reasonable if you take the time to look around, and there are still a ton of great restaurants in the area (464 in about a 1 square kilometre radius according to Trip Advisor). We were particularly impressed with the nasi goreng ayam (basically chicken fried rice with a fried egg on top, an Indonesian staple) at Warung Indonesia, and I had forgotten how much I enjoy Bintang, both the national beer and reigning national champion at plastering their logo on anything a tourist might possibly consider buying. Plus, the whole idea was to spend a few days doing nothing much but shaking off the effects of jet lag and a 13-hour time change, and nothing does that better than cheap, plentiful restaurants and some loungers by the pool. Just to be clear, though, in general most travellers consider Kuta to be the very worst part of Bali, and not necessarily indicative of the island as a whole. But it serves a few very specific purposes, and doesn’t go halfway on any of them. There is always something to be said that.

Next up, a significant change of pace to the beautiful rice fields and quiet rural atmosphere of Sidemen village in eastern Bali. But first, just a few more random thoughts on today’s Kuta:

Back then we found ourselves continuously shocked by the fitness and thin physique of the average tourist. That is no longer a noticeable trend, to say the least.

Traffic is much worse, but the sidewalks certainly haven’t gotten any bigger.

Plenty of random guys were still excited to offer me pot, mopeds, surfboards and sarongs, just like last time, although now apparently I now also look like a guy who might be interested in picking up some Cialis on my way to dinner. Hard to say if that is merely a pharmaceutical trend, or more a commentary on my physical appearance, but either way I’m choosing not to analyze it too closely. 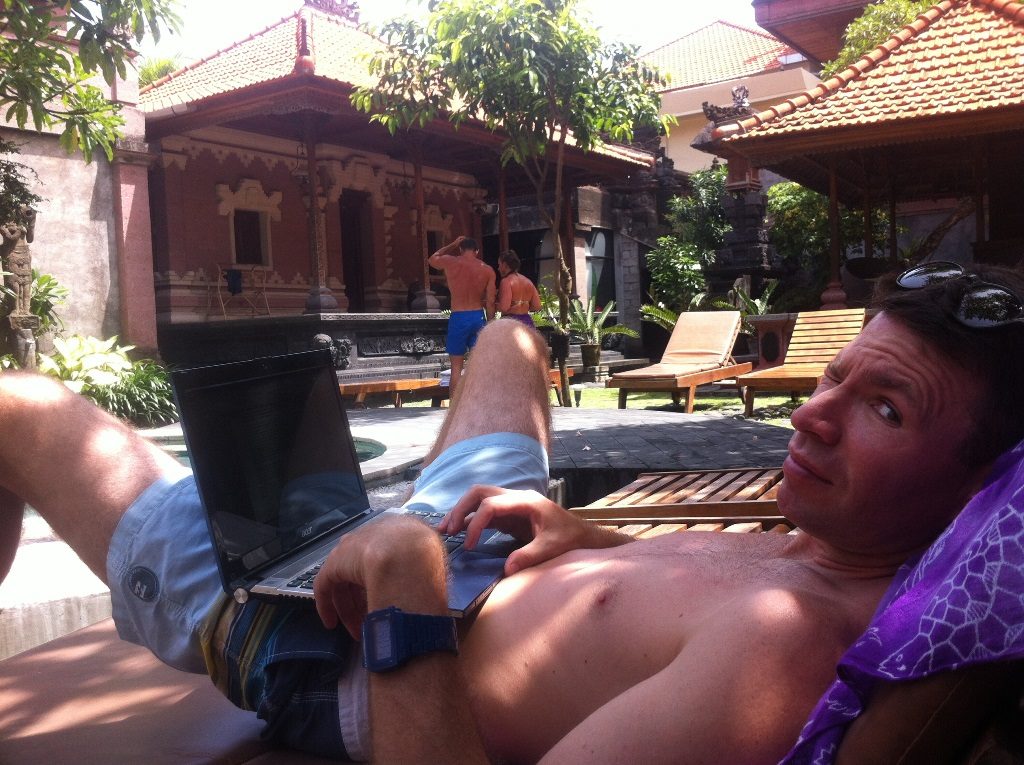 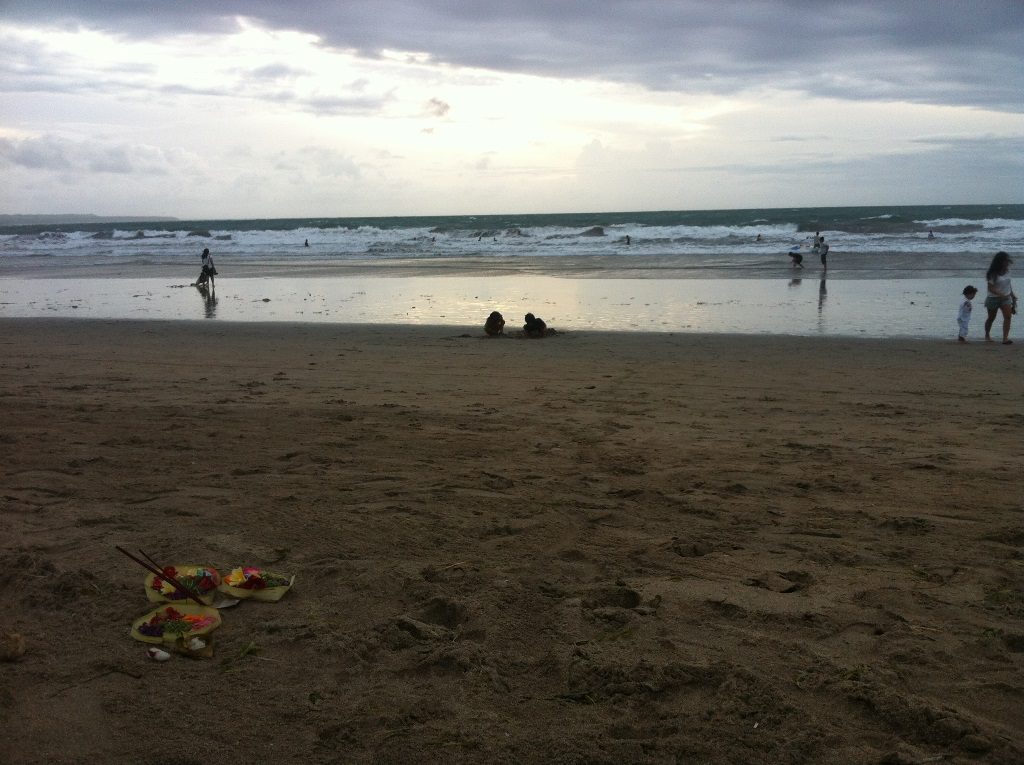 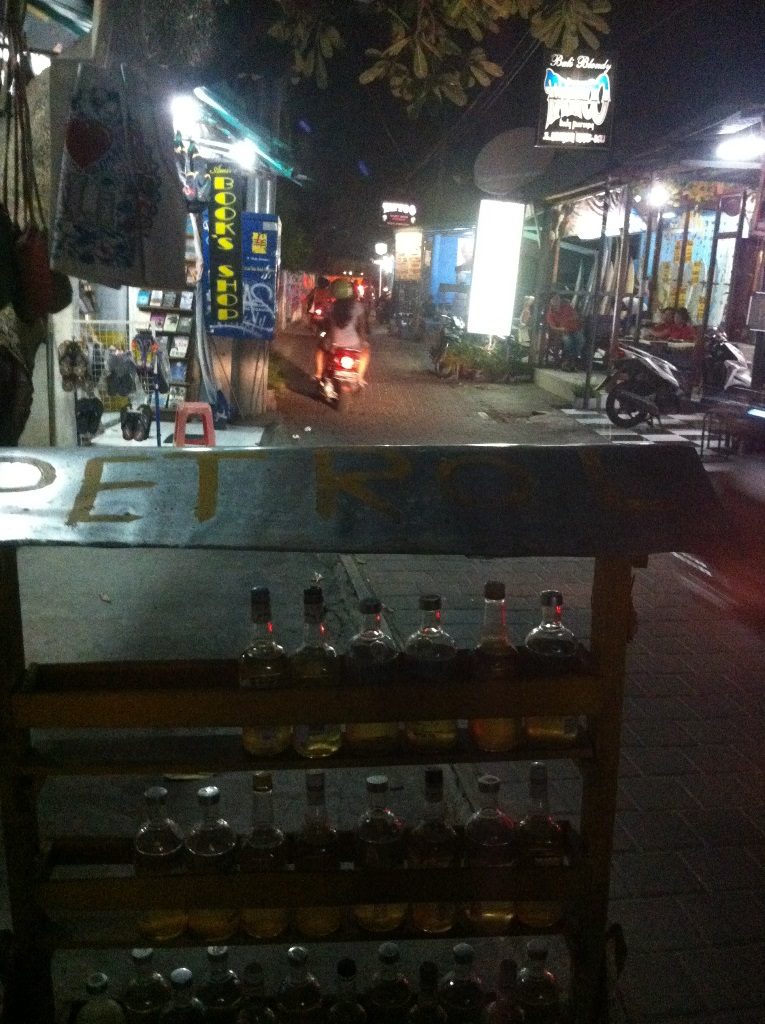