Morocco 2.0 – Skoura Oasis and Beyond 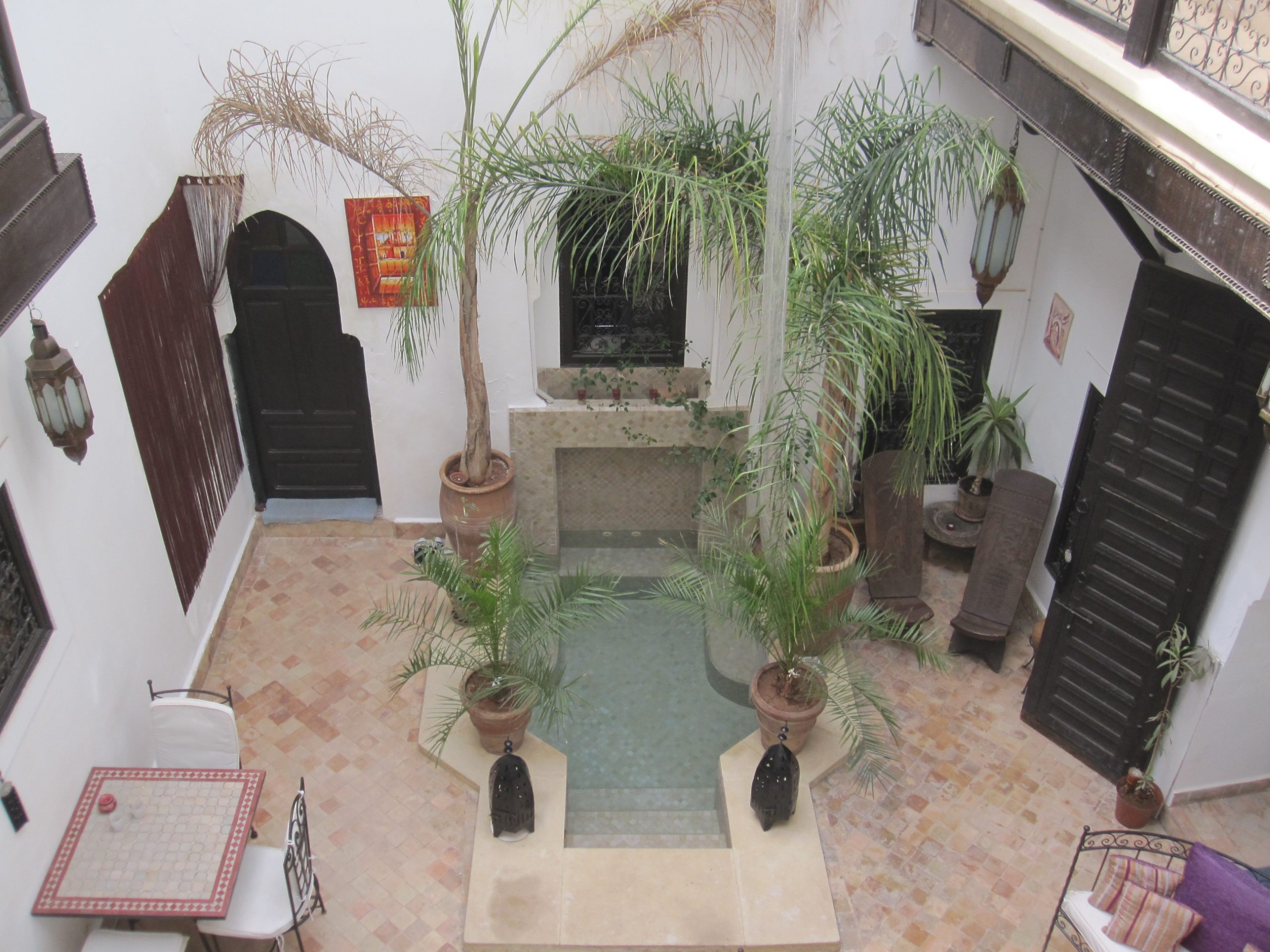 The City Our long awaited return to Morocco finally arrived last weekend when we took a roundabout set of dirt cheap flights from Madeira to Lisbon, Lisbon to Madrid, then Madrid to Marrakesh (and eventually on to Skoura Oasis). Marrakesh is home to a famous medina full of mad souqs and ancient traditions, some of which have been continuing virtually unchanged for centuries. Traditions like selling fresh squeezed orange juice, charming the pants off dangerous looking snakes and effortlessly fleecing clueless visitors such as ourselves and befuddled tour groups from France, Italy and China. Marrakesh has a reputation for hassle (justifiably) but it is more inconvenience than a problem, and the city is, on the whole, a safe place to visit. The famous/infamous main square, Djemaa el-Fna, is actually so raucous, festive and ludicrous it has been granted UNESCO World Heritage Site status putting this open expanse of pavement filled with weirdos into the same elite class of attraction as the Great Wall of China, the Taj Mahal and some little village in Algeria known for smelling like rocks and an abundance of unusually randy camels. The square is full of lively activity and perplexing sales practices at all times of the day and night, but it really comes alive in the early evening when all the competing food stalls spring into action, whipping up couscous, harira soup and funky tajine stews in a haze of smoke, smells and friendly catcalls intended to attract customers through the enticing use of words like “cheap”, “hot” and “meaty”. 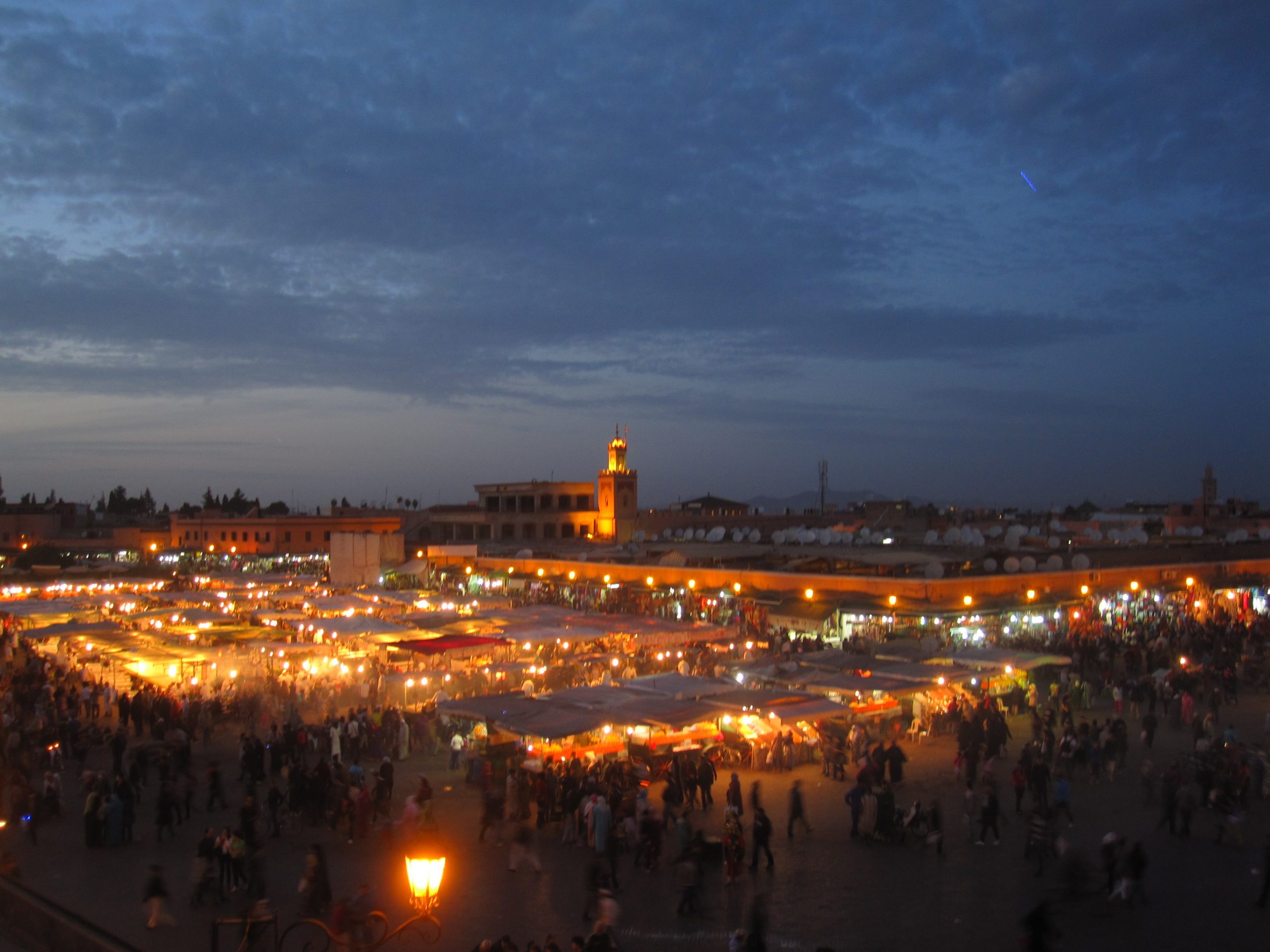 I kept waiting to be interrupted by pop-up websites. After enough time spent weaving and bobbing our way through the masses we soon decided, just like we had during our first visit nearly 9 years ago, that drinks high above the action at a café on the square was the perfect place to take in the action from a safe and serpent-free distance. And take pictures without being accosted by every teenage dirtbag presenting himself as some sort of photo police, generally deep undercover in a tattered robe, Nikes and some large colourful headphones. So, for a far from exhaustive list of things one could find if so inclined within the very loose confines of Djemaa el-Fna: Orange juice

Monkeys (hissing and snatching hilariously, at least until they hit the end of their thick chains) 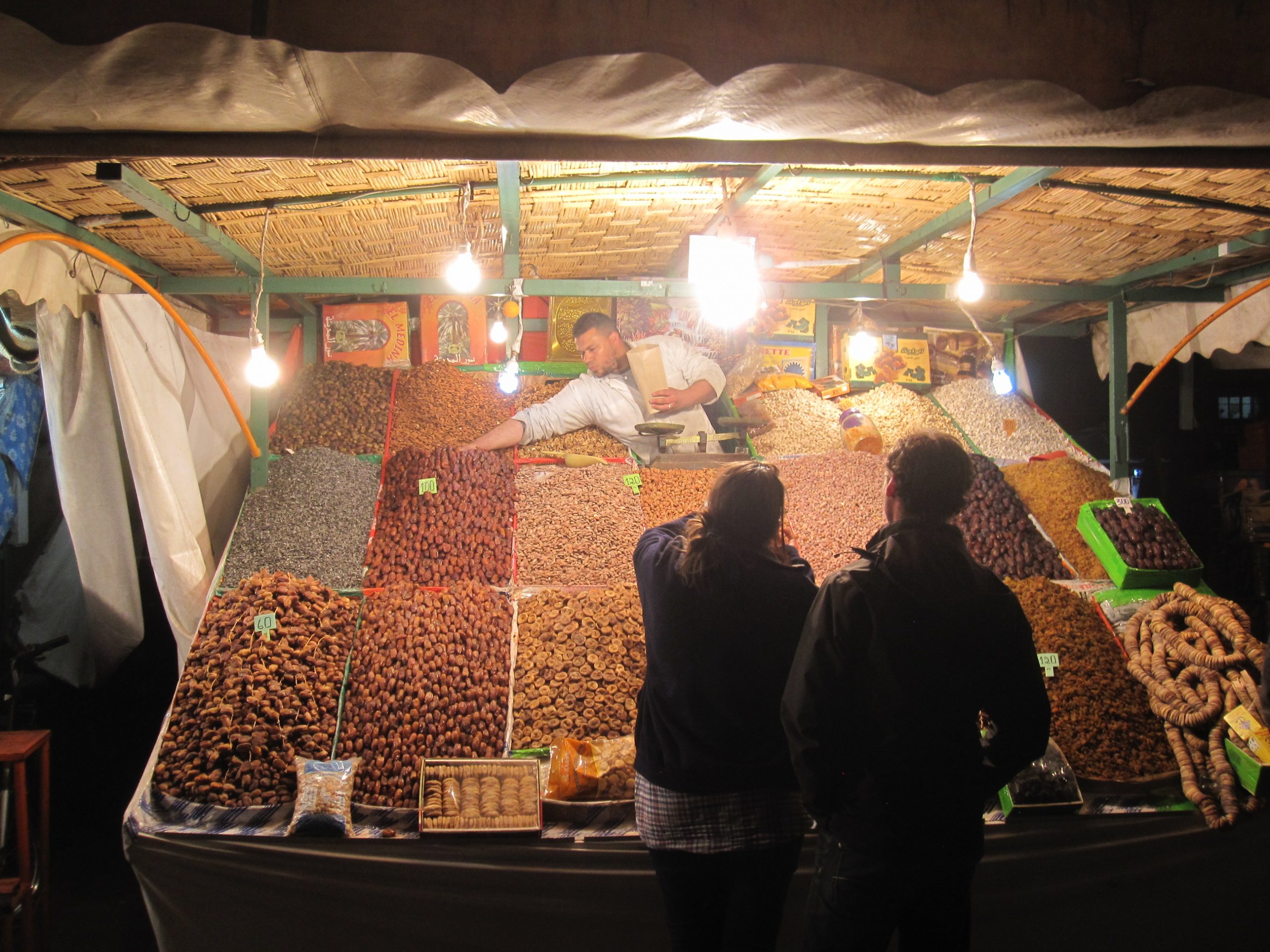 From there the famous souqs of the Marrakeshi medina spread out far and wide, with thousands hawking their wares in dingy, narrow alleys and makeshift fabric walls. They say getting lost is half the fun, in which case we were at least 50% successful after making the rookie mistake of trying to find a particular restaurant amid the maze of chaos and old urine, ultimately spending over 2 hours walking in circles, doing our best to fend off the opportunistic young men who make a living off waiting at confusing corners ready to pounce on even the slightest of hesitations and discussing at length which of Laynni and I was marginally more to blame for our seemingly hopeless predicament and increasingly angry stomachs. Our search for an ATM went much the same. As did lunch the next day and, well, you get the picture. On the bright side, at the height of our bickering some guy on a motorbike ran right into the back of Laynni’s leg, which I found quite amusing at the time. Still do, really. 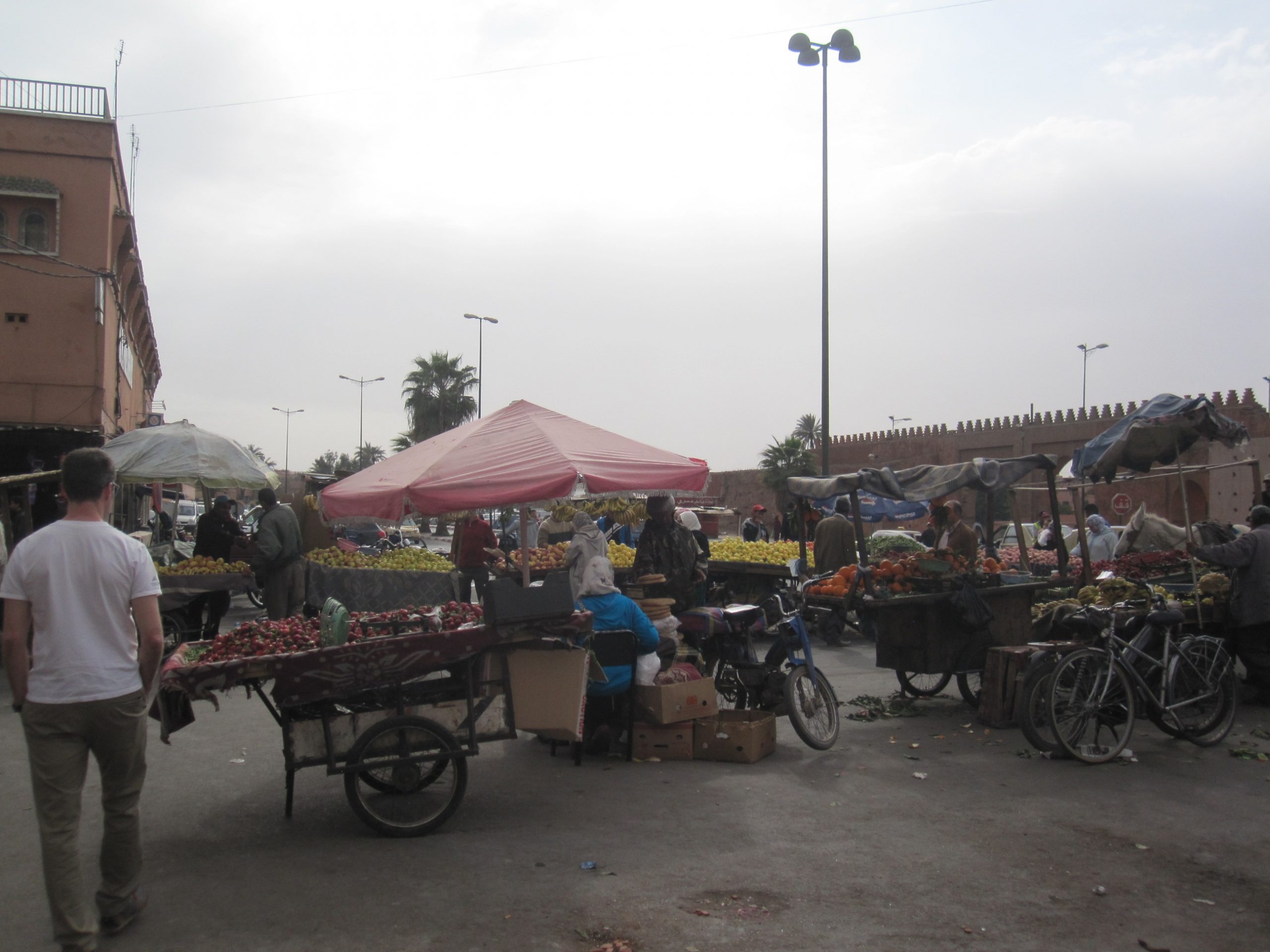 Of course, we were far from alone in our confusion and randomly chosen corners, as pretty much all tourists find themselves in the same helpless boat sooner or later. I’m pretty sure the Marrakesh tourist pamphlet features an overweight, underdressed European ducking underneath an impractically low awning struggling to fight down a narrow alley filled with bags of spices, heavily laden donkeys, dangling sides of beef and racks of scarves as blindingly colourful as a new scabies outbreak, their face showing them to be at once overwhelmed, bewildered, amused, wary, and maybe just a hint proud to find themselves daintily attempting to avoid piles of donkey feces in a dark souq full of smirking guys in dirty djellabas.

As for accommodation, we spent our 3 nights in Marrakesh in a cool little riad just outside the busiest areas of the medina. Riads are traditional Moroccan dwellings that are generally quite fancy (good fancy, not “wearing a bow tie to see Les Miserables with Dwayne and Curtis” fancy), feature a lot of cultural decoration and always an indoor courtyard, garden or pool. In this particular case, it was a bunch of plants, a small splash pool that would feel awkward to use being just a few feet from the dining room table, and one lethargic turtle who just hung out next to the heater and glared at us from inside his shell whenever we tried to incite him to action through various failed methods including waving, whistling and taunting (although never racially motivated – we’re not Italian after all). All in all, a far cry from the cramped and dingy hotel rooms we stuck to religiously last time around (probably saving ourselves the grand total of about 15 euros per night at the height of our earning years – yes, I agree, interesting math, that).

The Country When our time in Marrakesh was up (for me anyway, Laynni will be returning in March to meet her parents), we boarded a bus for the 4-5 hour trip east to Ouarzazate. The scenic journey crossed a high pass through the Atlas Mountains and, as a result, the windows were completely fogged up most of the ride keeping us from properly appreciating the unbelievable presence of roadside snow just days after emerging from a plane into sweltering 28 degree heat. It also made us question the necessity of the groaning but unfortunately highly effective air conditioning system which, despite the forethought of wearing nearly all our warm clothes in anticipation of just such an illogical occurrence, left us huddled together under Laynni’s recently “liberated” airline blanket like a couple of shrivelled and forgotten October peas. Of course, we only had the blanket for the second half of the trip anyway, after I eventually manage to use some horribly mangled French to convince our reluctant bus driver to let me get at our bags during our brief fifteen minute lunch break, me fumbling with the clips and locks in my haste as the scowling driver became quickly frantic, then began berating me something to the effect that “he is hungry, he needs to eat!”, which soon evolved into all out yelling “Eat! I need to eat!”, which did literally nothing to improve my dexterity, and finally I had to give up, settling for just the blanket and a sheepish grin, and returning the restaurant thoroughly humbled and still without my toque, gloves or extra sweater. 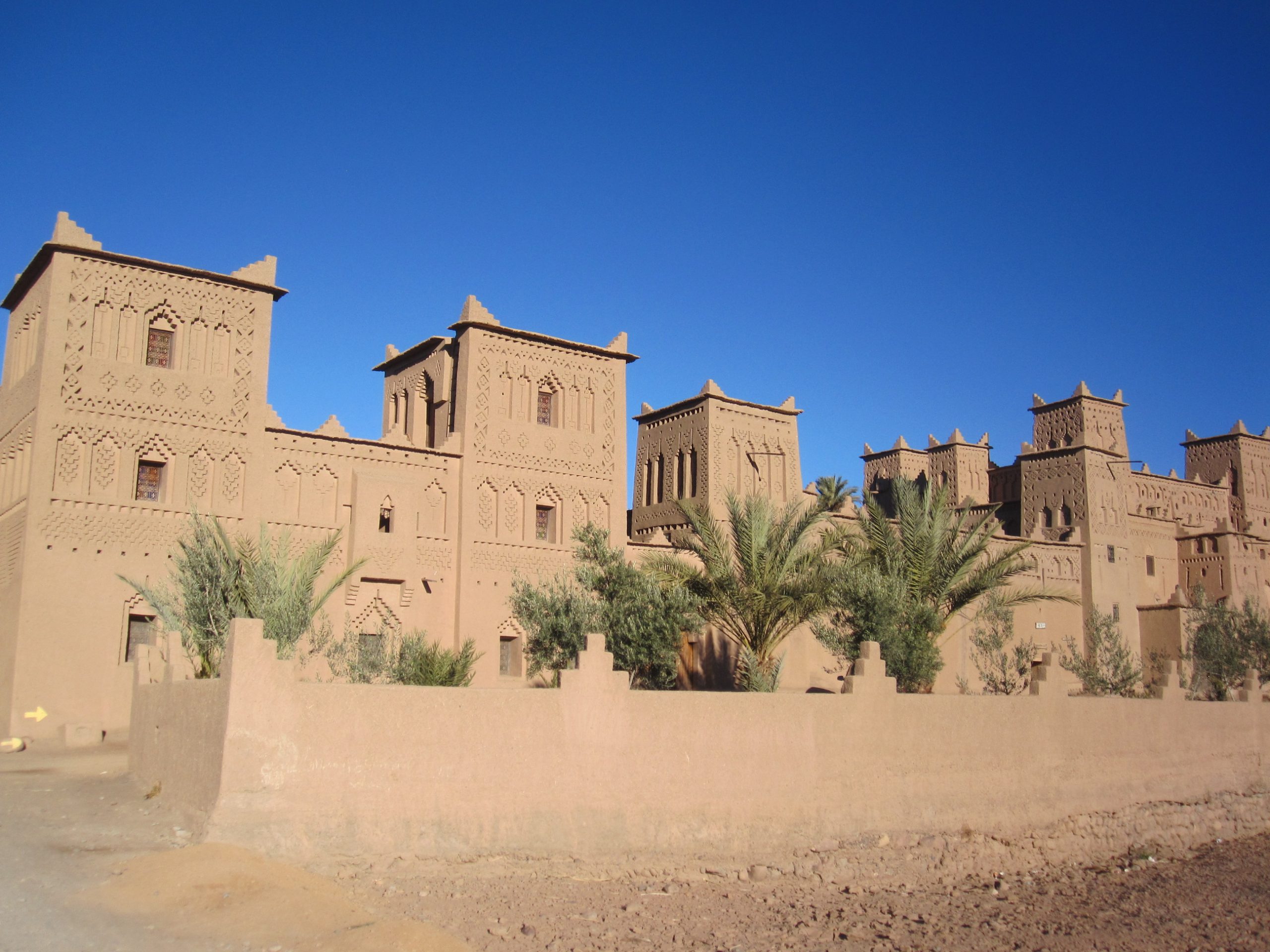 Ten minutes later I returned to the bus to be greeted – in truly Islamic fashion – by a smiling, convivial driver seemingly oblivious to what had appeared to be a disaster of epic proportions only minutes earlier. One thing you can be certain of when travelling in Muslim countries – no shortage of public displays of drama.

Upon arrival in Ouarzazate we were very pleased to find a much more moderate temperature (probably in the 15-20 range) and quickly joined forces with a German couple to share a taxi for the 40 kilometre trip to the Skoura Oasis (around $30 including bonus photo stops and a lot of stuff we couldn’t understand). Now presenting Kasbah Amridil, a small but ancient mud-brick mansion with a small kasbah hotel attached to the side where, as luck – and the magic of email – would have it, we were spending the next two nights. Beautifully restored, incredibly friendly staff/owners, picturesque, and with an actual heater in the room, we couldn’t ask for more (except maybe Champion’s League on TV instead of settling for guys wrestling catfish on National Geographic Abu Dhabi). The Skoura Oasis itself, which radiated out from the kasbah for many kilometres in three directions, is renowned as one of the best destinations in Morocco for its maze of palm groves backed by stunning views of the snow-capped mountains in the distance. We spent most of our time wandering aimlessly among the fields of palm and almond trees, casually greeting locals in poorly formed Arabic and French that left them confused but generally convinced our intentions were good, enjoying a lengthy and leisurely panoramic lunch stop and, of course, learning that even in relatively cool spring weather, 5 hours in the sun requires much more than a light dusting of SPF 15. 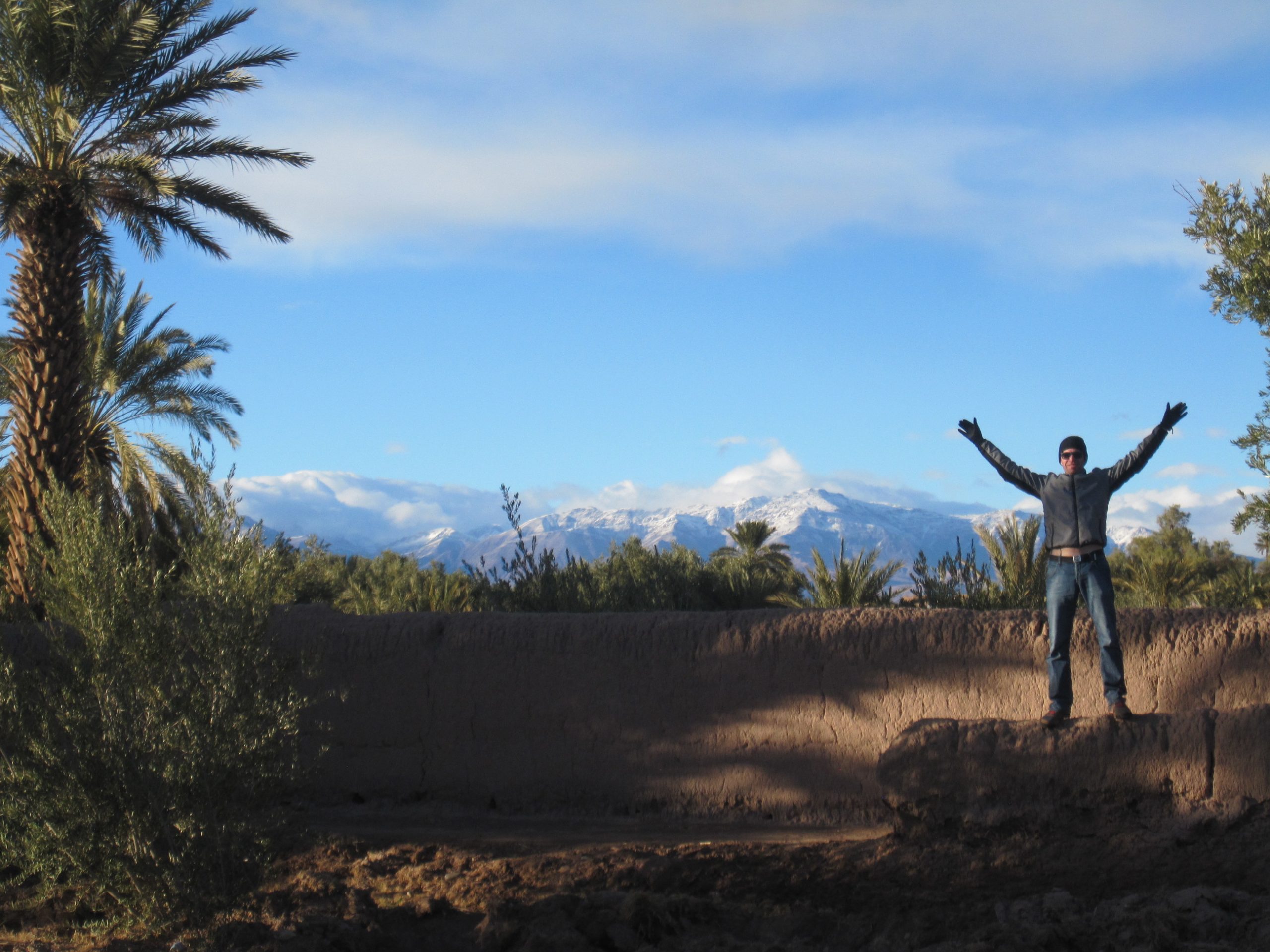 A great stop, and a hard to place to drag ourselves away from, but the famed Dades Gorge awaited further down the road. More on that, and how I came to find myself in the unexpected position of having a Muslim woman sitting on my lap miming the use of a plastic bag for sniffing fumes, next time.