Southward bound and curiously titillated1, based on hearing rave reviews about the scenery, swimming and socializing, we made our way quickly and rather painlessly to the backpacker haven of Nkhata Bay. The area itself consists of a number of attractive little inlets filled with deep, clear water surrounded by steep, hilly shorelines and teeming with local fishing boats. Good snorkeling2, great swimming and plenty of places to buy a beer or 74 – what’s not to like? Sure, the place has a bit of a party reputation – on its best nights described as fun and social, on its worst – loud, obnoxious and highly susceptible to unplanned pregnancies3.

2              The only place to see Cichlid fish, hundreds of slight variations endemic to Lake Malawi that have evolved into unique species over millions of years, all from a single Jewish comedian.

3              Most commonly manifesting itself two countries further on through gradual collection of symptoms, followed by slowly dawning recognition and several hours carefully wording a private Facebook message to the person most likely to be the father, a boisterous Aussie nearly 1,000 kilometres away sleeping off his hangover in a disheveled, fetid dorm room who loves smoking pot and wearing bandanas, and whose last status update declared that “Red Bull rocks!”

But overall – good room, good food, lots of things going on, with the only other real downside to this area (and possibly Malawi as a whole) being truly shit internet. And I don’t say that lightly, being, as I am, a man with vast reservoirs of experience with horrible connections to the World Wide Web4. I’m still a little bit in shock that I’ve somehow managed to get my blog photos uploaded – the best I can figure is that I just randomly hit on the perfect storm of clear skies, the moon’s gravitational pull and kids pausing their Call of Duty to attend to the Call of Nature. Or, possibly, an enlightened soul. An idea of a typical day in the Hunt for Internet in Nkhata Bay:

5              An ephemeral, non-specific point of time in the future, sometime between the present and Uzbekistan’s first moon landing, the only certainty being that it definitely does not refer to the day after today.

We spent one night at Big Blu – a very decent, friendly budget option but no rooms with bathrooms and a few too many “beach boys”6 for our taste – before moving on to Mayoka Village – a nice distance from town, great set up, very friendly, the water is treated and drinkable and our room, although expensive by Malawian standards ($40/night), was pretty spectacular with good views of the bay, a fan, an upstairs bathroom (look at us living like union members), decorative toilet paper so we get to wipe our ass with a puppy’s face , 2 decks, and did I mention  the fan? As I whined about in Chitimba, trying to get by without a fan around here this time of year is like throwing a life preserver to Paula Abdul, simply not worth it. And the hot, dry and dusty weather continued on without respite until our 3rd day in Nkhata Bay, when the temperature suddenly dropped and it finally started to rain, prompting large groups of men to pile into small, unsteady boats and sputter aimlessly around the bay cheering, chanting and celebrating the long-awaited coming of the rains, most likely drunk, and almost certainly peeing where we swim. Laynni, meanwhile, got into the act as well, bounding up from the bed rejuvenated and giddy, hastily donning her black, full length “burglar” underwear and strutting about the room like a team roper with a new pair of leather chaps. It didn’t last, though, no matter how much she tried to dance like Cameron Diaz in Charlie’s Angels, since no matter how ominously the clouds massed and the thunder rolled it always seemed to end up being a whole lot of build up with very little pay off7, with the heat always returning more oppressive than ever, with the whole rainy season phenomenon easing in much like a tired old man into a warm soapy bath8.

With an entire blog entry to create and very little in the way of plans during our stay here in Nkhata Bay, I decided to send Laynni out with instructions to “make something happen”, hoping she could find her way into some comical misadventures to provide something to write about that, for a change, wouldn’t involve making anything up, or any more venereal disease jokes than absolutely necessary9. Unfortunately, her idea of wild mishaps tend to revolve around forgetting what page she’s on, or having a nap interrupted, although I did get to watch her dry heave for a while every time we walked past the fish market. And on one occasion some type of biting insect found its way into her panties, those occupying her body at the time, resulting in a reaction somewhere between interpretive dance and a truck driver wrestling a shaved bear, plus a number of angry red marks on her ass. Meanwhile, speaking of reptiles, Laynni is very excited about the sheer volume of lizards that live here at Mayoka, not to mention the astonishing variety, but not for the reason you think10. Mainly she’s happy that, for maybe the first time on any of our trips, there are somany lizards that I’ve actually given up anxiously grabbing her arm, pointing each one out and loudly exclaiming, “Lizard!” You don’t know what you’ve got until it’s gone…11

9              Only 2 in 5 psychologists believe that a comic obsession with venereal disease is symptomatic of a dangerously low sperm count. The other 3 attribute it to a romantic history with Emelio Estevez.

10            Contrary to popular belief, lizard soup is really only considered a delicacy among a small group of Norwegian amputees living on Vanuatu, and Kelly Ripa.

It hasn’t all been inactivity and fried eggs, however. We did join a boat tour one day where we took a short cruise on the lake, fed fish to the fish eagles12, partook in something we are choosing to call “cliff”-jumping but that, in truth, more closely  resembled “sort of large rock”-jumping, organized an extravagant victory parade to celebrate my silver medal finish in “randomly-placed-stick triple jump” after a hard-fought battle with a group of 6 to 12 year olds, then finished off the day with a game of beach football13where the concept of “next goal wins” was surprisingly disputed and I became the unfortunate victim of a broken big toenail, tragically the very one I had spent the past 6 months growing out14. Reading, writing, swimming, sleeping15, the beat goes on.

13            Similar to North American soccer, but played barefoot on a field of rocks, bark and pieces of Carlsberg, usually against shirtless humans whose heads reach the top of your navel. 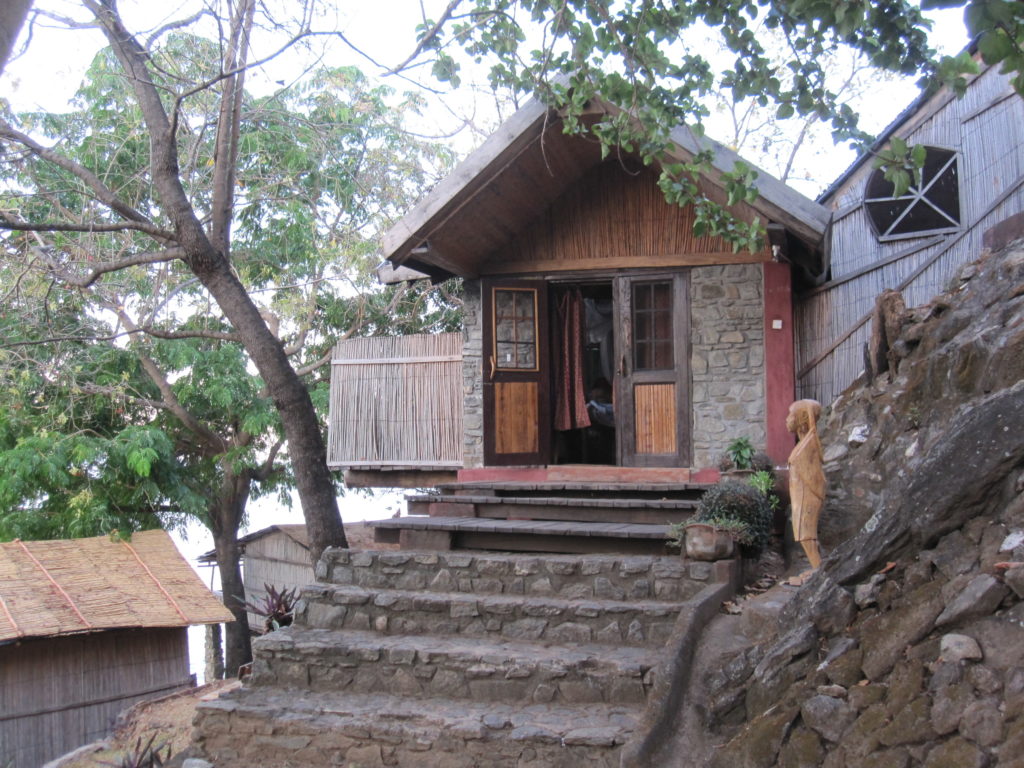 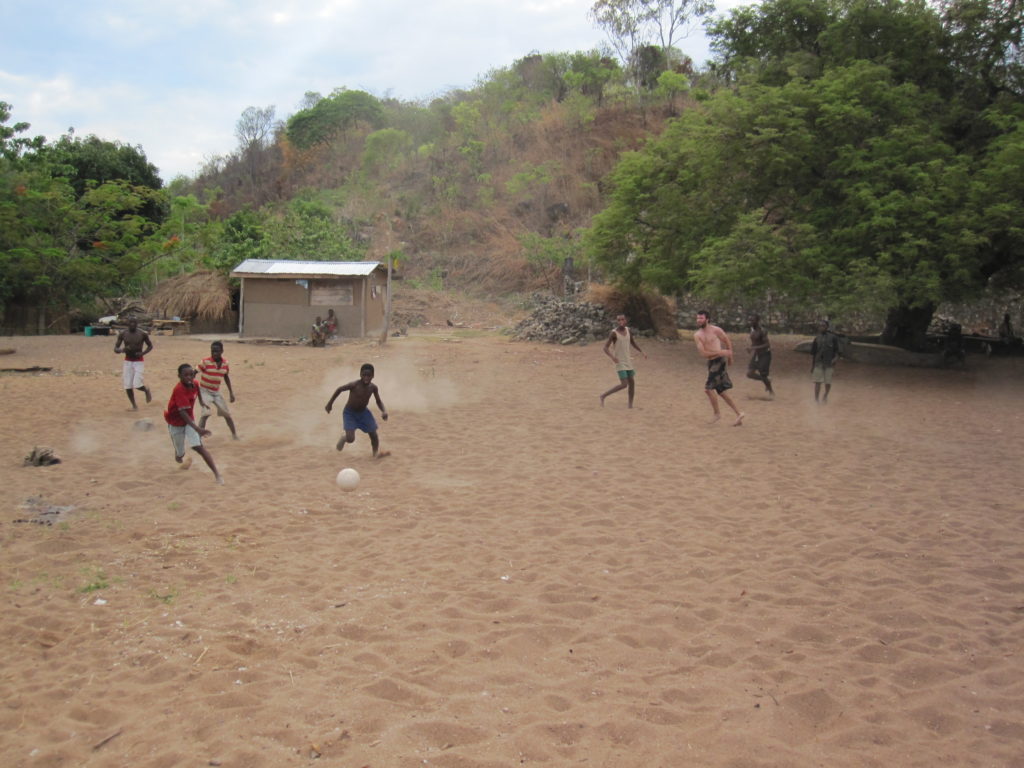 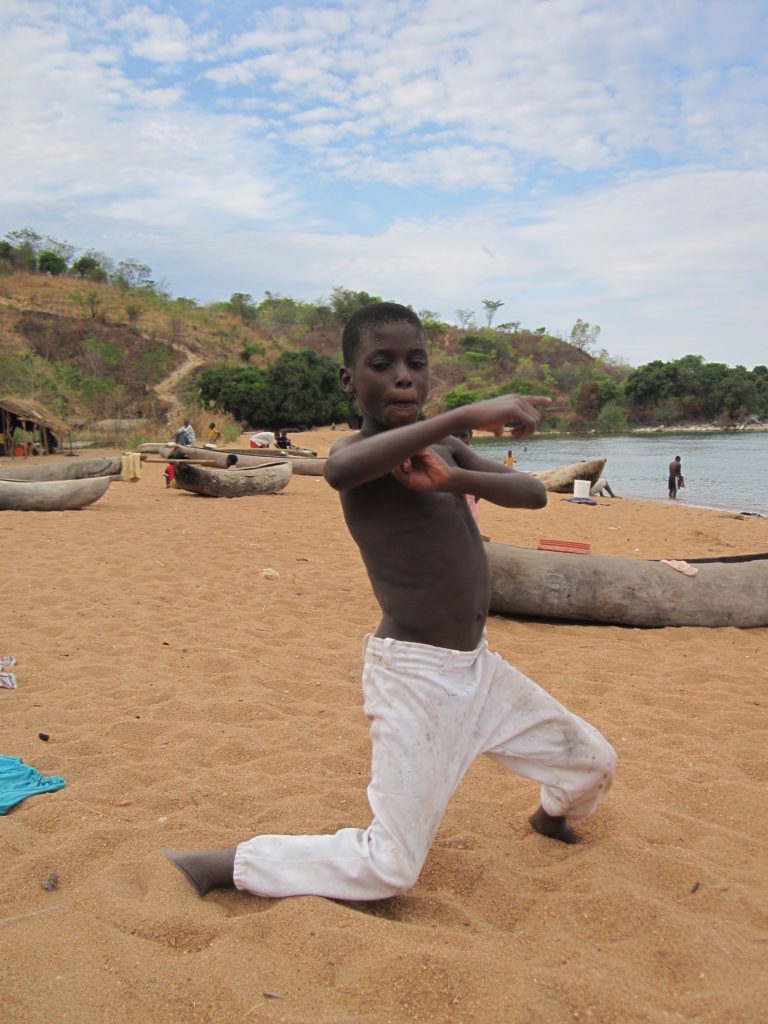 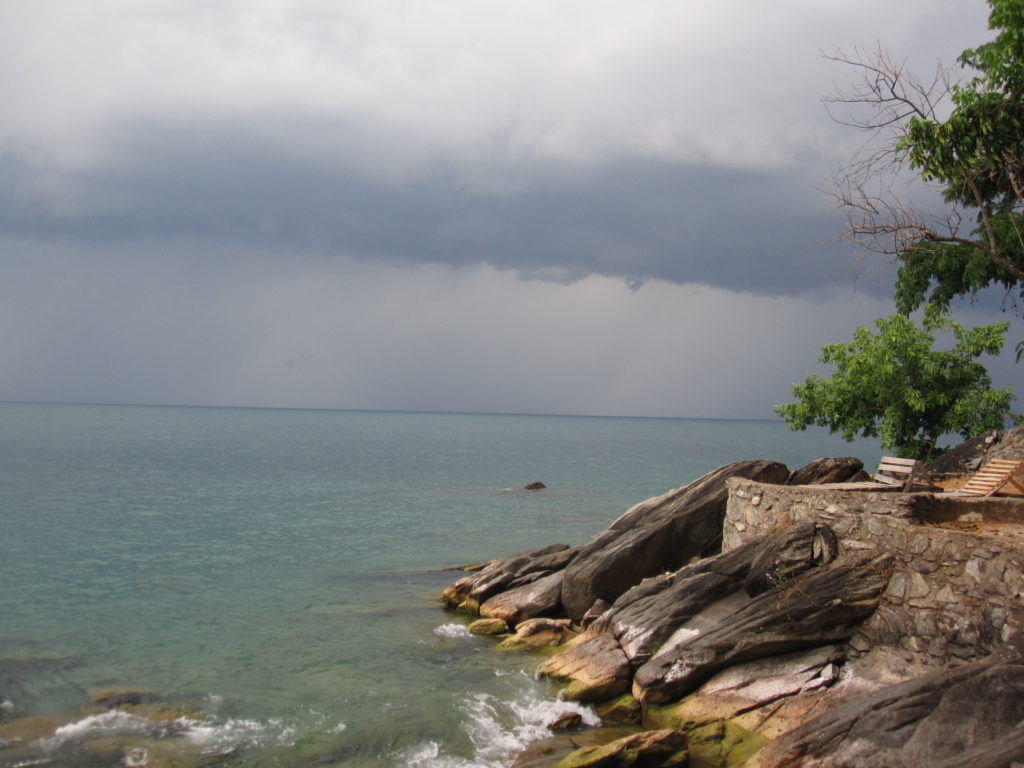 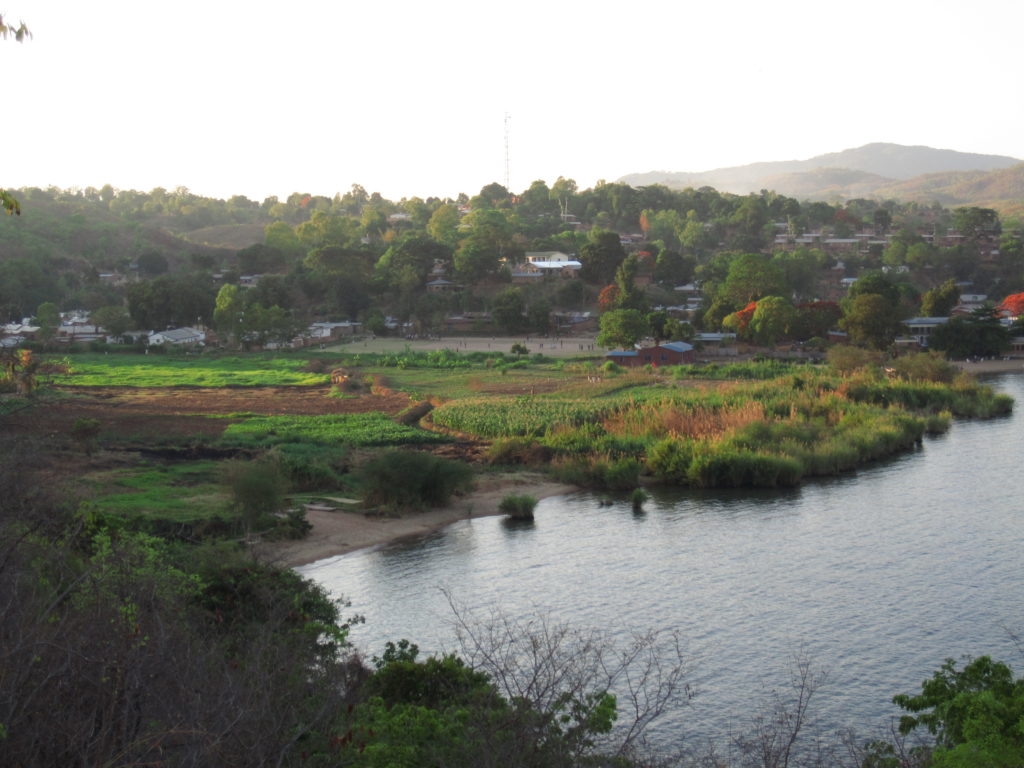 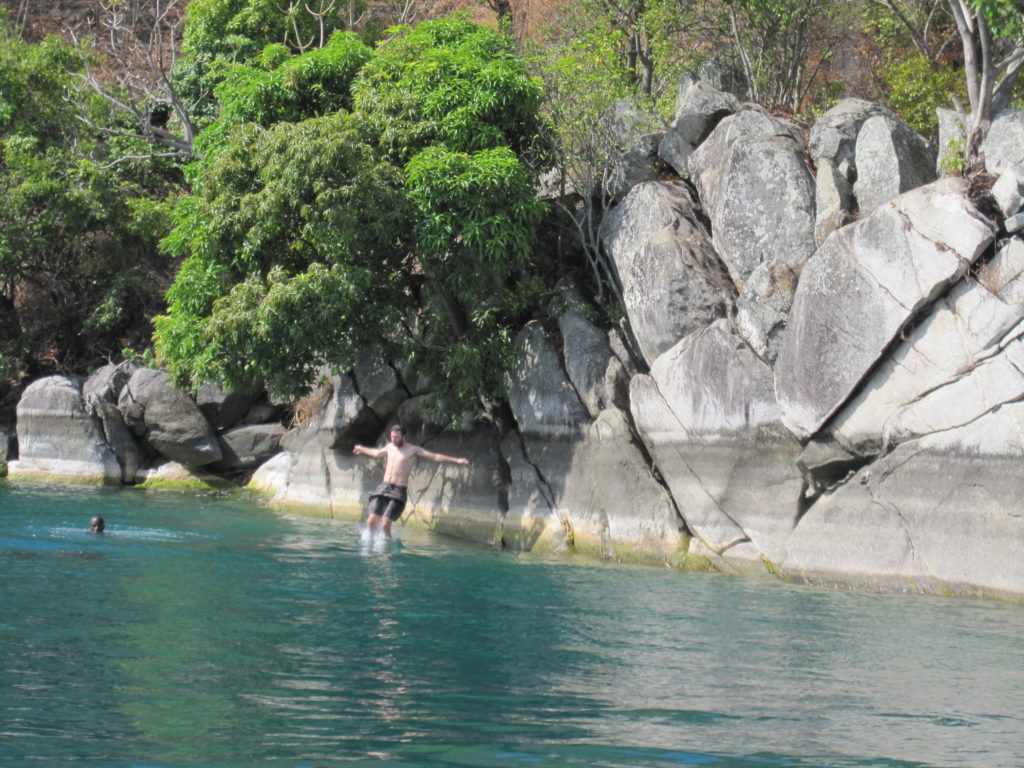 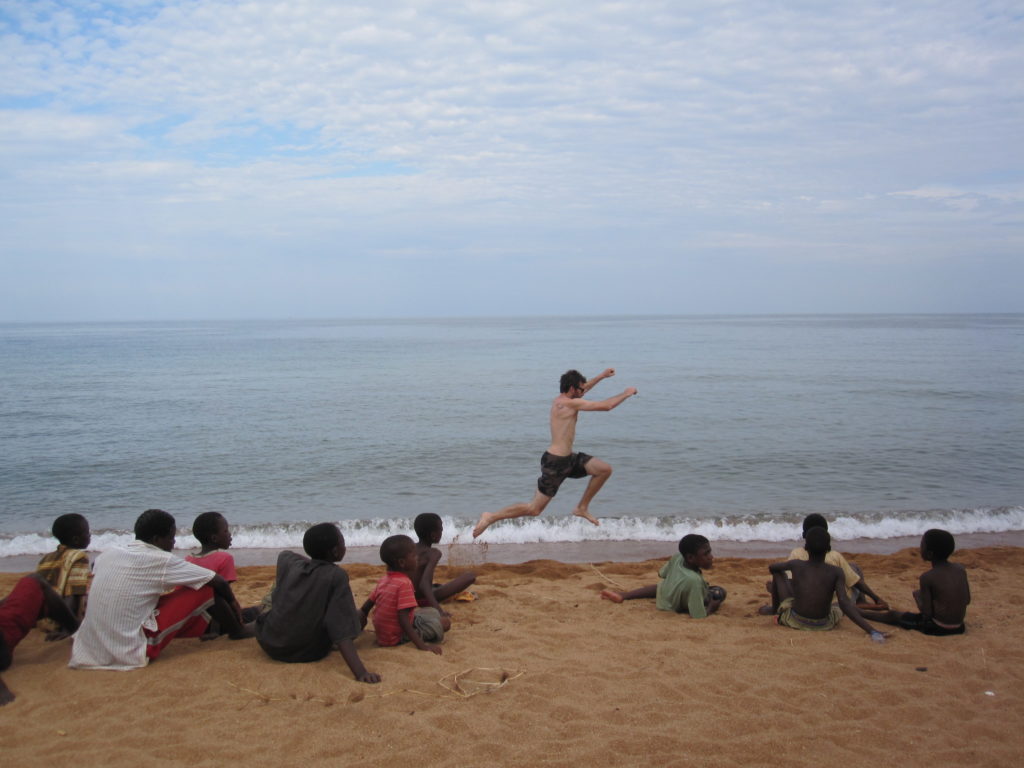 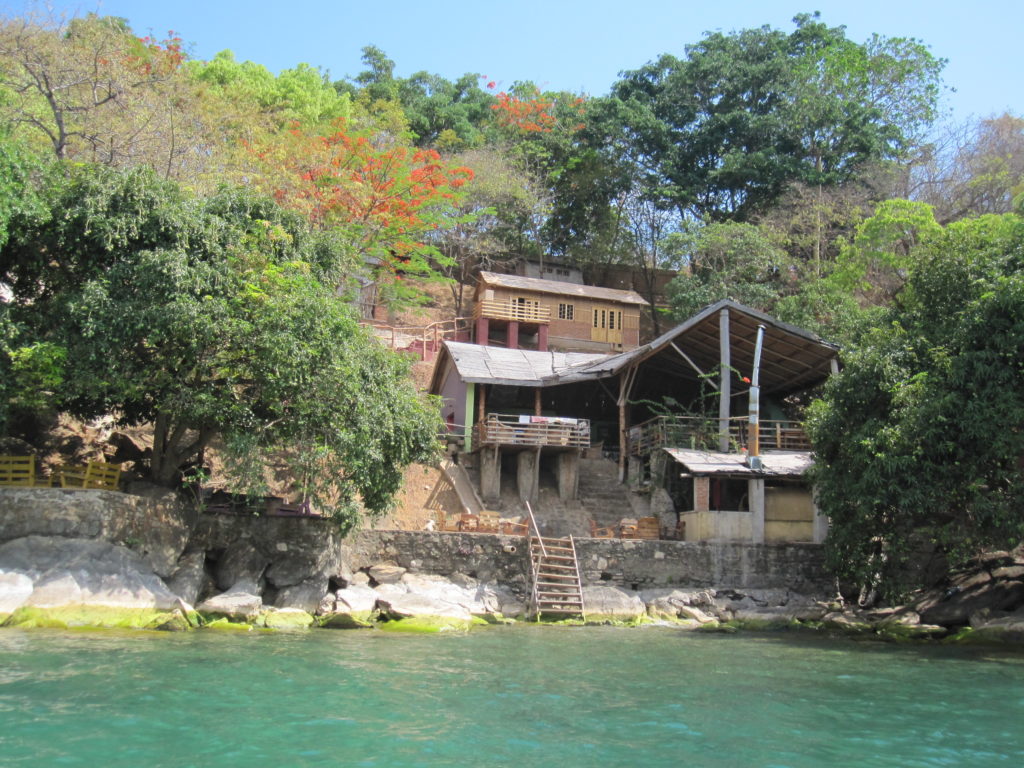