Soccer, Pico Ruivo and my Love of Madeiran TV

Here we are, still in Madeira, having already hiked to spectacular Pico Ruivo and enjoying the slow pace of life and the constant and predictable weather. The last two days the wind has kicked up and the forecasted high has dropped like a rock from 20 to 18 and we can’t seem to take our eyes off the window and its views of trees being gently buffeted, as though we are witnessing Hurricane Katrina, an impending ice age and the evolution of Portuguese outerwear all at the same time.

I finally worked up the gumption to get out of the house for more than just a brief walk to the store for more Oreos last week, heading into Funchal to see a soccer game. They actually have two Portuguese First Division teams in Madeira, Maritimo and CD Nacional. And, despite supposedly representing the blue and white collar sections of Madeiran society respectively, both play in pretty shitty stadiums. I went to see Maritimo take on Rio Ave (from some little hill town on a river in northern Portugal) at Estadio dos Barreiros, an old and famous coliseum dug out of the side of a hill, which explains why its name translates to Loam Pits Stadium. 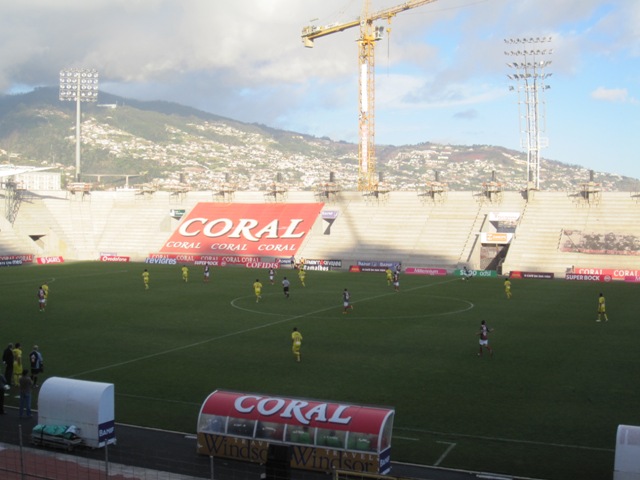 It is also known for its banana-shaped stands. Unfortunately, due to renovations apparently pending since 2009 only a little less than half the stadium is actually in use. So while it is quite full and festive on the main, partially covered side, the whole time we were staring at row after row of depressingly empty stone benches on the far side, all presided over by a majestic yellow construction crane. Inspirational. The views of the city and ocean were pretty good, though, which is a little unusual for a football stadium.

The game itself was pretty exciting, ending in a 1-1 draw. Although Rio Ave definitely had the best of the play and should have won it in the late going when Bebe, a cocky young fellow with a crisp new mohawk who was recently acquired on loan from none other than Manchester United, went in all alone but fired high over the net and then ran around like a dog with his tail on fire for a while trying to convince the refs that the only way a supremely talented douchebag like himself could possibly have missed the net on a clear breakaway was because someone was tugging on his jersey (see, like this, tugging like this!) even though there hadn’t been anyone with a semi-trailer’s distance of him at the time. He was ignominiously substituted out less than a minute later. Couldn’t have happened to a nicer guy. Unfortunately incidents like that were one of the main things I took away from the game.

Just an overwhelming lack of class and sportsmanship. It is also getting more noticeable in bigger leagues like the English Premier League but was really on display that day, whether due to differences in leagues or being there in person and seeing all the behind the play stuff, it’s hard to say. Crying at the refs, diving, playing on while a guy is hurt, faking injuries (those two might be related), and one of the most annoying new developments I’ve seen in all leagues these days, picking up the ball and running off with it when the other team wins a throw or a free kick. If a ten year old did that in a game of 7 on 7 he’d get his ass kicked, so how the hell did it become something professional athletes find acceptable? On the other hand, tickets were only 20 euro, considerably cheaper than games in London, for example, and in addition to beer they serve “ponchas”, a traditional Madeiran drink made with sugar cane alcohol, honey, lemon, sugar and your choice of fruit juices. I suppose it helps to distract from the calibre of play and half-empty stadium. 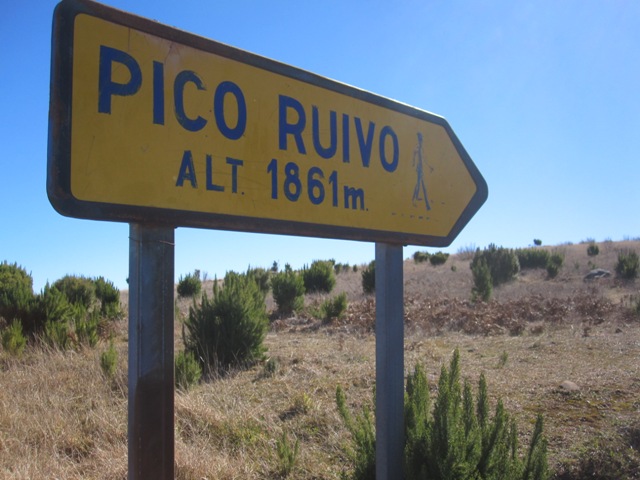 A few days later, after, you know, I’d recovered from all that excitement and everything, we ventured out on a hike across the middle of the island. It was referred to as the “Highest Peaks” hike, not surprisingly because it hit the three highest peaks on Madeira (all at around 1,850 metres above sea level). 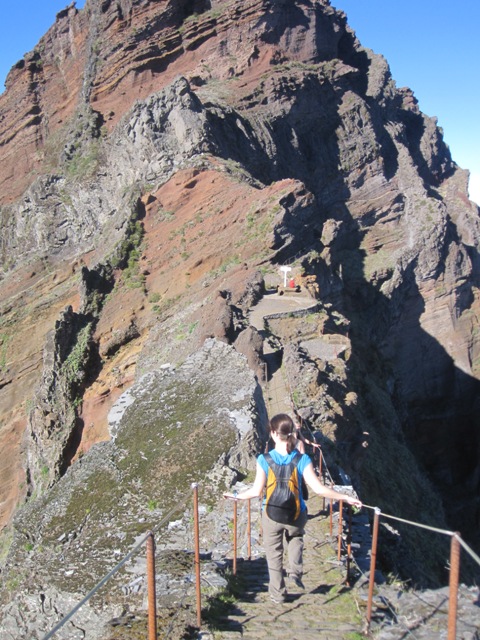 We got off to a bit of an inauspicious start when we were milling around at the trailhead and Laynni suddenly wondered aloud why my ass was already so wet and we hadn’t even done anything yet. Well, the good news is that it had nothing to do with the sweaty torso of a local bean farmer this time. The bad news was that the water bladder in my backpack had sprung a pretty serious leak. Luckily there was a canteen nearby that was more than happy to bend me over and sell me three litres of water for the price of fifteen litres in town. A mutually beneficial relationship, I suppose. After that, though, we were off and running, or, well, gingerly making our way might be a better way to describe it, way down, way back up, way back down, through a dark tunnel, along a narrow wind-swept ridge, back up, etc. etc. But with truly incredible views the whole way, sometimes with panoramic vistas of the entire island, its spectacular valleys and the distant Deserted and Porto Santo island. Other times from down inside the valleys themselves surrounded by sharp peaks and wild jagged clefts and ridges. Somehow we lucked into tremendous weather as well, a perfect 20 degrees Celsius, clear blue skies and not a breath of wind, even on the highest, most exposed ridges. Of course, it’s always 20 degrees here so that wasn’t so unusual. But apparently those other things were extremely rare. Could our good weather magnetism finally be back? It’s been AWOL for some time now, along with Justified re-runs on TV at noon and any semblance of physical motivation. 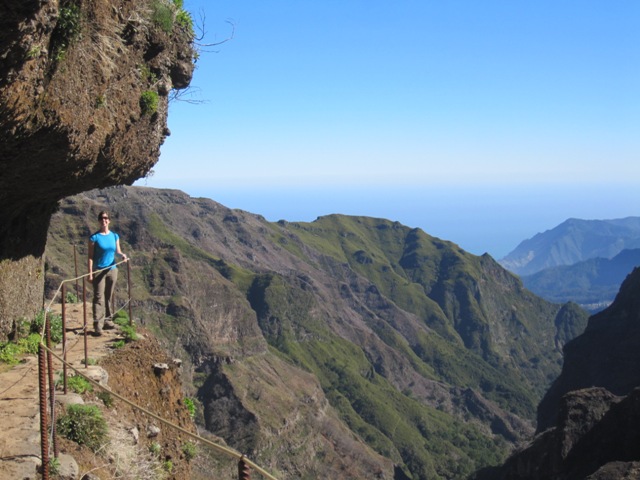 All told, though, another stunning hike on Madeira to join the one at Ponta Sao Lourenco we did the first time around. Then we spent three days unable to walk because our calves were so sore (and not just mine, this time), avoided the internet and watched the Super Bowl Monday on Monday night re-run (since it only started at midnight here and I needs my beauty sleep). Next up, the Queimadas hike through some of the most remote forest on Madeira. Which, geographically, can’t mean more than five kilometres or so from the nearest town, but still, they say it will be very different, and “jungle-y”.

Portugal’s most popular hike is the Rota Vicentina which wanders down the Costa Vicentina passing through beach towns and charming villages of Aljezur, Odexeice, Zambujeira, Almograve, Carrapateira, Vila Nova de Milfontes and Porto Covo along the way.

A couple random observations about Madeira:

Even though English has no official place here almost everyone we have met speaks at least some, and most speak it pretty well. We have four theories to explain it. 1) More and more people speak English everywhere these days 2) As a cruise ship port they receive their fair share of English speaking visitors 3) Portuguese is a seriously ridiculous language to speak or understand so they just don’t expect it from foreigners (unlike Spanish) 4) Also unlike in Spanish speaking countries, in Portugal the American TV shows are not dubbed, only subtitled. Which means built in practice on a daily basis, especially for the younger generation. 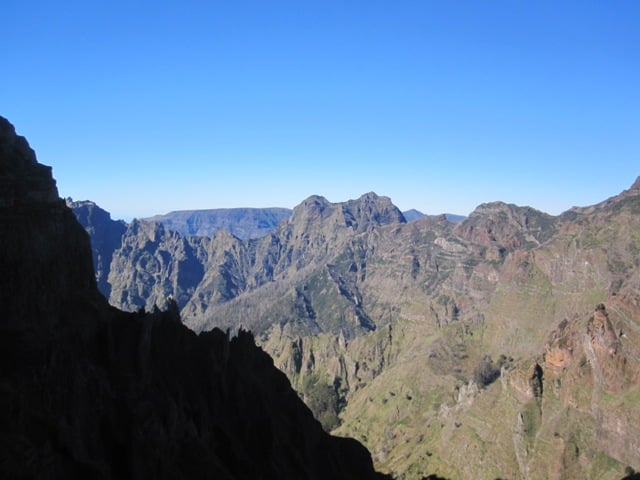 Speaking of TV, they only have commercials in between shows, never breaks in the middle, and the commercials only ever seem to be for other TV shows. Maybe TV revenue is all from subscription here already (because it’s definitely headed that way in North America soon enough). Besides that, and more interesting to me, is that they don’t have set times for their shows. They just run as long as they run, and the next one might start at 12:56 or something like that. Then the next day the same show might start at 12:39. I can see the benefits of having shows appear at predictable times instead, but there is also something to be said for not forcing them to fit an exact 22 or 41 minutes plus commercials format.

Well, we are down to our last week and a half on Madeira and looking forward to Carnival starting this weekend. Supposedly one of the best and biggest Carnival celebrations in all of Europe, it officially starts tomorrow but really hits its stride Friday with the morning Children’s Parade, followed by the afternoon Old People’s Parade, leading up to the evening Transvestite’s Parade (reputedly mostly just a bunch of punks stealing their mom’s bras for the night, but still). The festivities last all weekend, culminating next Tuesday with the Open Parade, where anyone can do basically anything, is more or less how I interpret it. Mardi-Gras-ish, I suppose. Should be fun, with a boob or two here and there.