Well, as all things must do, our time in Argentina finally came to an end. Thankfully, I suppose, at least as far as our feet were concerned since, in case it wasn’t clear from the last entry, we spent the vast majority of our time in Argentina hiking. And eating large chunks of meat. But mostly hiking. Enter Puerto Varas.

Anyway, like I said, feeling it was probably time for a change of pace, we spent our first full day in Chile in the medium-sized lakeside town of Puerto Varas by making our way by bus to the tiny lakeside town of Petrohue (and when I say tiny, I mean basically a campground, a restaurant and a few groups of young people camping slash getting inebriated enough to hook up with each other despite the filth) for a couple hours of… hiking. Creatures of habit, thy name is…us? But this was different? How, you ask? Well, for starters, instead of hiking through forests and up mountains to arrive at beautiful secluded lakes, we hiked through volcanic ash and stunted forests near a volcano and along a beautiful, very popular lake. 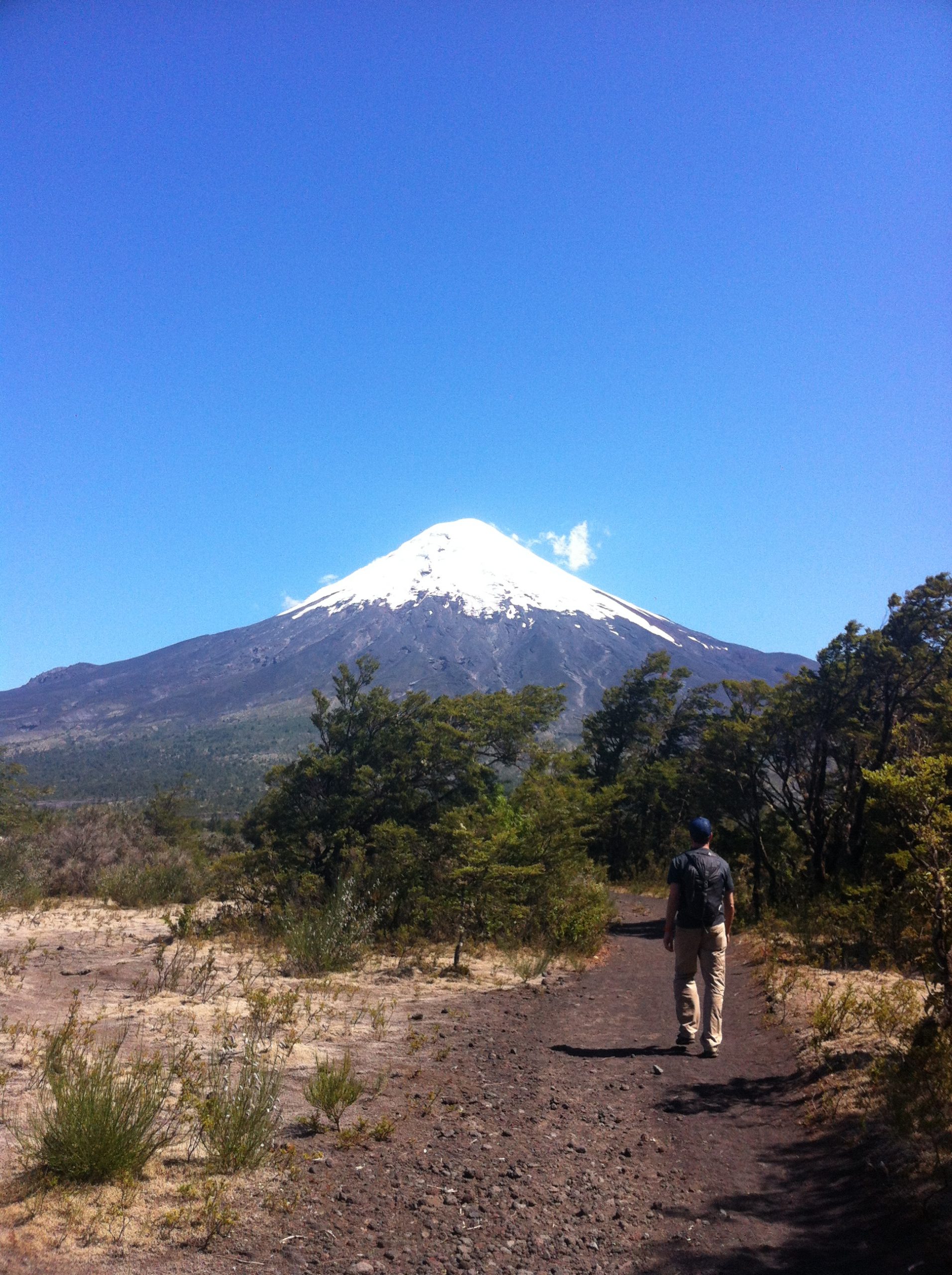 Other than that we spent a few minutes at the beach, swam briefly, oh so briefly, watched some football/soccer at yet another Irish Pub, and overall just became part of the whole vacation town vibe. Then after a few days we rented a car and headed west, ish, and mostly south, I suppose, to spend a few days on the alluring island of Chiloé, famous for its tasty and affordable seafood, its traditional wooden churches and, of course, witches. Also known as three things I’ve never shared a bathtub with.

Now for some breaking news from the Lakes District:

Puerto Varas, Chile – One needs look no further than the side of any road in the more scenic areas of the country to see that backpacking has clearly become the enterprise of choice among Chilean holiday-makers this summer. Throughout the Lakes District, with its clear blue waters surrounded by picturesque volcanoes, and the island of Chiloé, rampant with quaint fishing villages and beautiful old churches, the highways are lined with tired and seemingly bewildered backpackers lugging their massive, unwieldy loads all over the country. From Santiago all the way down to Patagonia these unprepared and over-packed masses can be found trudging next to the pavement, their bedraggled clothing, knotted hair and glassy eyes testament to rough nights spent on rocky beaches, hard patches of dirt and stagnant ditches filled with empty beer bottles and old condom packages, neither of which seem likely to lead to the same lusty drunken humping they did when fresh out of the nearest supermercado. 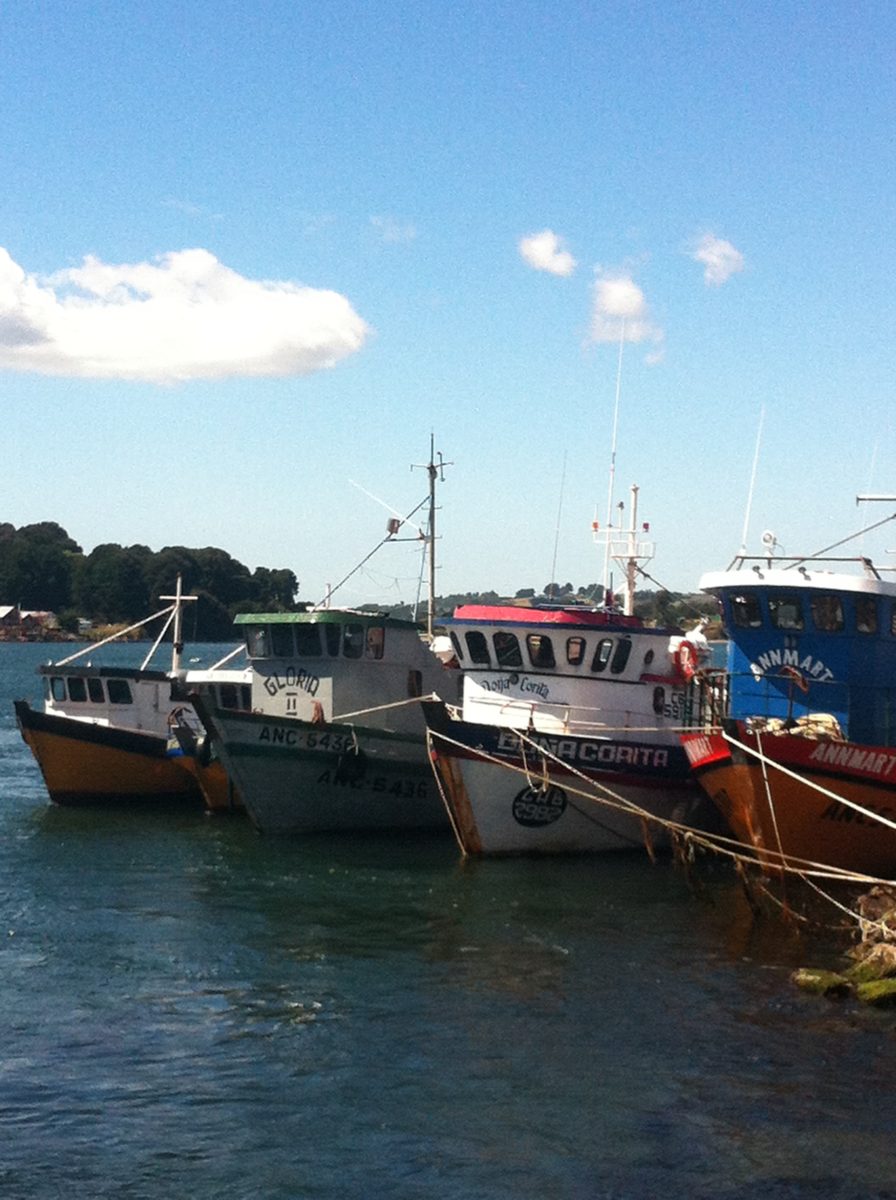 Awkwardly hunched under the tremendous weight of massive backpacks whose unwieldy size seems completely disproportionate to the complete lack of clean clothes on display, somehow these delusional Chileans have become convinced that spending long periods of time eating junk food, begging strangers for rides and wallowing in their own filth is the best use of the their scant annual allotment of vacation time. As though following some central manual on hobo living, they dangle all manner of random items from the outside of the pack – sleeping bags, tents, pots, shoes, plastic bags, juggling paraphernalia, bongs and, of course, the ubiquitous cheap silver sleeping mat – so as to ensure their passage as closely resembles a circus, or perhaps medieval gypsy caravan, as possible. And, despite the almost constant passage of cheap, efficient Chilean buses, it seems a veritable rite of passage, or possibly some sadly misconceived notion of adventure, to spurn these very practical and eminently affordable transportation options in favour of glumly staring down passing vehicles with their thumbs partially extended in a forlorn and despondent attempt to convince these independent, and admirably clean, people to invite them into their similarly grime-free cars in order to help them avoid sharing in any of the legitimately onerous costs of owning, maintaining or driving a vehicle. Raúl, 24 year old IT specialist from Santiago, was asked to explain why he thought it would be tempting for these holidaying families and hard-working locals to allow him to sully their expensive vehicles with the noodle-stained shorts hanging loosely below his ass or his dusty guitar case smelling pungently of cannabis, he coughed briefly, absent-mindedly dug something from his nose and furtively wiped it on his sleeve, then blinked a number of times in rapid succession before replying,

“Everyone knows it is my right as a Chilean to guilt honest people into providing free transportation for my friends and I, despite all those buses that just passed by, or our obvious lack of personal hygiene.

Plus, I’m really hoping they’ll let me use their bathroom. We ran out of toilet paper days ago.” 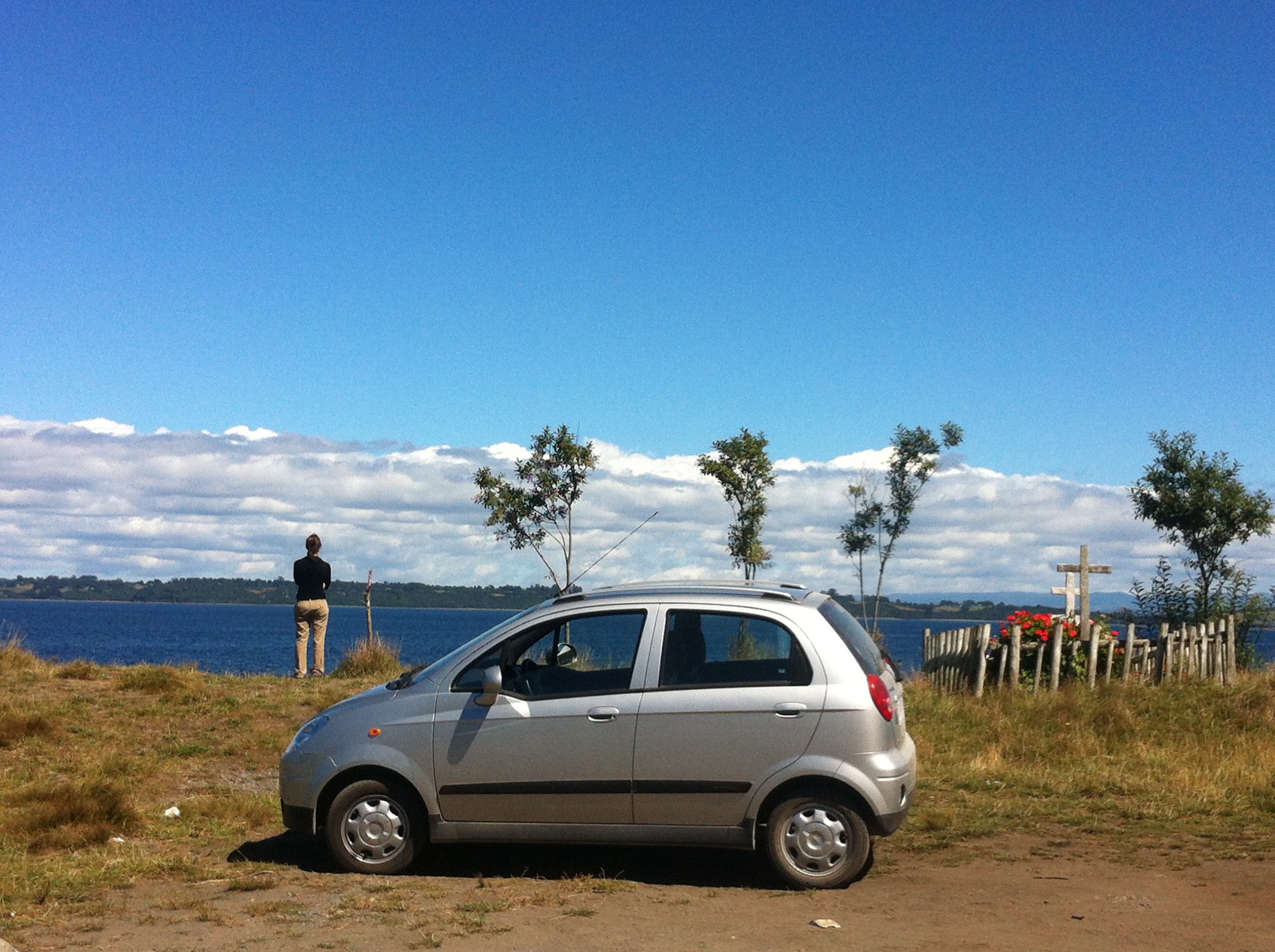 Tourist Couple Rents Car for the Weekend, Thrilled to Have New Venue for Petty Arguments

Chiloé, Chile – Canadian couple Dean Johnston and Laynni Locke expressed an unreasonable amount of excitement last week at the prospect of a enjoying their rented Chevrolet Spark. Despite the clear limitations of the tiny, bulbous American car, the pair of tourists were clearly envisioning a much more thrilling adventure than such a vehicle was equipped to provide. When pressed, they admitted that it was as much the change of venue they were looking forward to as the promise of the open road and the inordinate freedom to stop to urinate as frequently and randomly as they desired.

“Normally we spend a lot of time on buses, where we can argue about which bus to take, when it will leave, where it goes from, whether or not it will stop for food, and how much it will smell like seafood chips and damp burlap. Or else we have to take a taxi, and disagree about the best place to find one, and how much it should cost, and what the exact odds are the driver will fart as soon as we get in.

But with our own car, well, it opens up a whole new spectrum of things to bicker over”, explained Johnston.

Locke then went on to detail all the interesting new arguments she was enthusiastically hoping to participate in, such as when to turn, where to turn, when to stop for gas, how their bags aren’t necessarily as safe as Dean thinks they are just because they are completely out of sight in the trunk of the locked car on a busy street in the middle of the afternoon, or how loudly she should scream into his ear whenever he completely rationally chooses to drive the wrong way down a one-way street for a little while now every now and then.

Chilean Women Bravely Take Up Torch of Chain-Smoking in Public

The “o” in Chiloé Not a Typo, Claim Indignant Islanders

Inmates Given Metal-Tipped Sticks, Enlisted to Clear Highways of Hitchhikers

Couple Enjoys 15 Languid Minutes on Rocky Beach, Then Calls it a Day 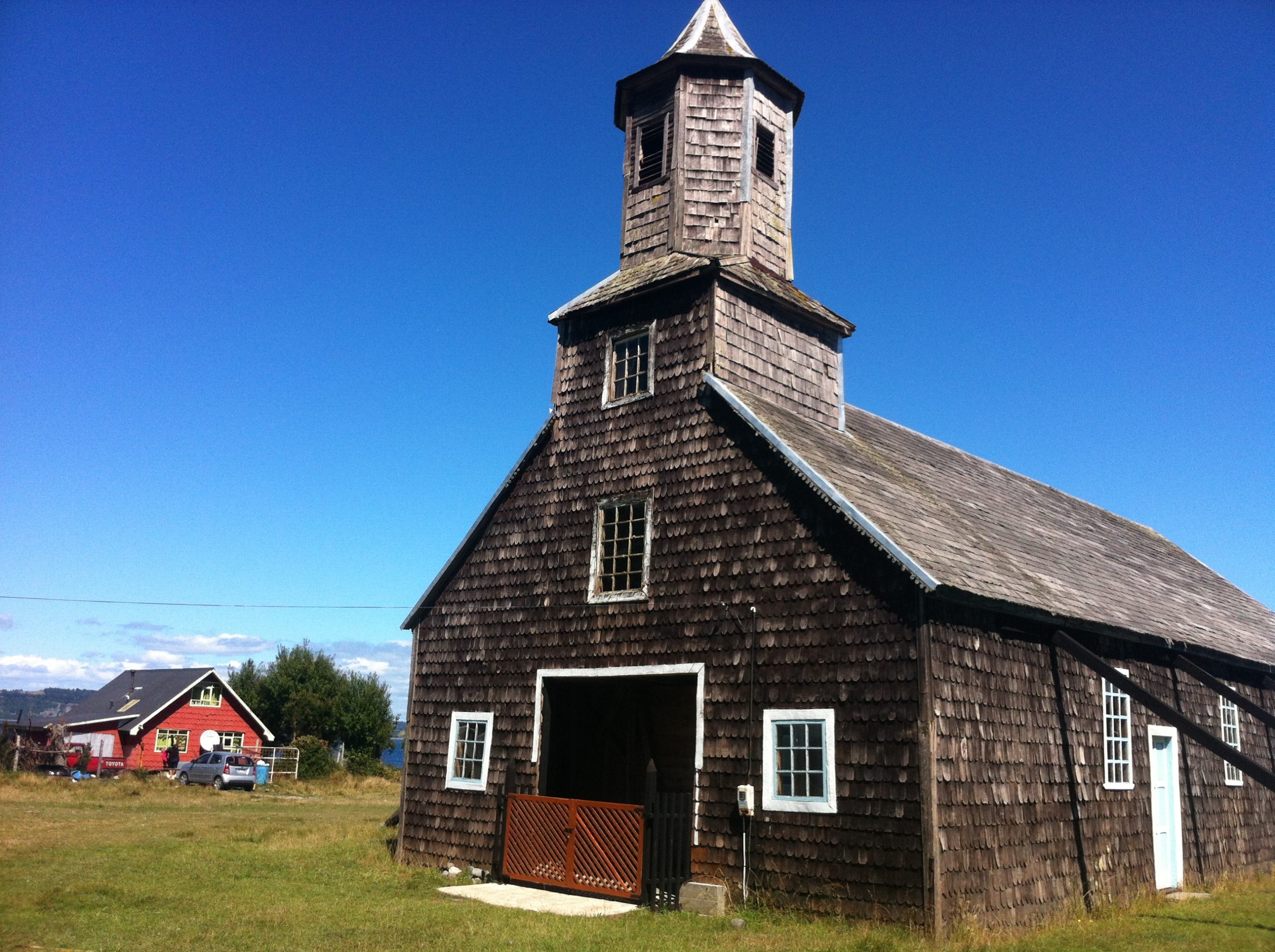