Time rolls on here in Varkala at the Saraswati with us up to a whole lot of not much, with the occasional bout of very little, interspersed with a pinch of almost nothing every now and again. Sure, we went to the beach a few times, have gone for some walks here and there, played some cards, watched some shows, wrangled the odd herd of cattle, walked the restaurant circuit counterclockwise one day, and sent a postcard of an old Hindu woman with her boob sticking out to Ellen DeGeneres, but for the most part we’re just taking it easy. And working on our travel plans for “travel” portion of the trip which is tentatively scheduled to start in earnest around the 21st or so. We’ve been booking some trains and flights (trains, especially, book up crazy fast) as well as some hotels for when Laynni’s parents are here in March since then we’ll be in what you might consider to be the real tourist zone (Taj Mahal, etc). 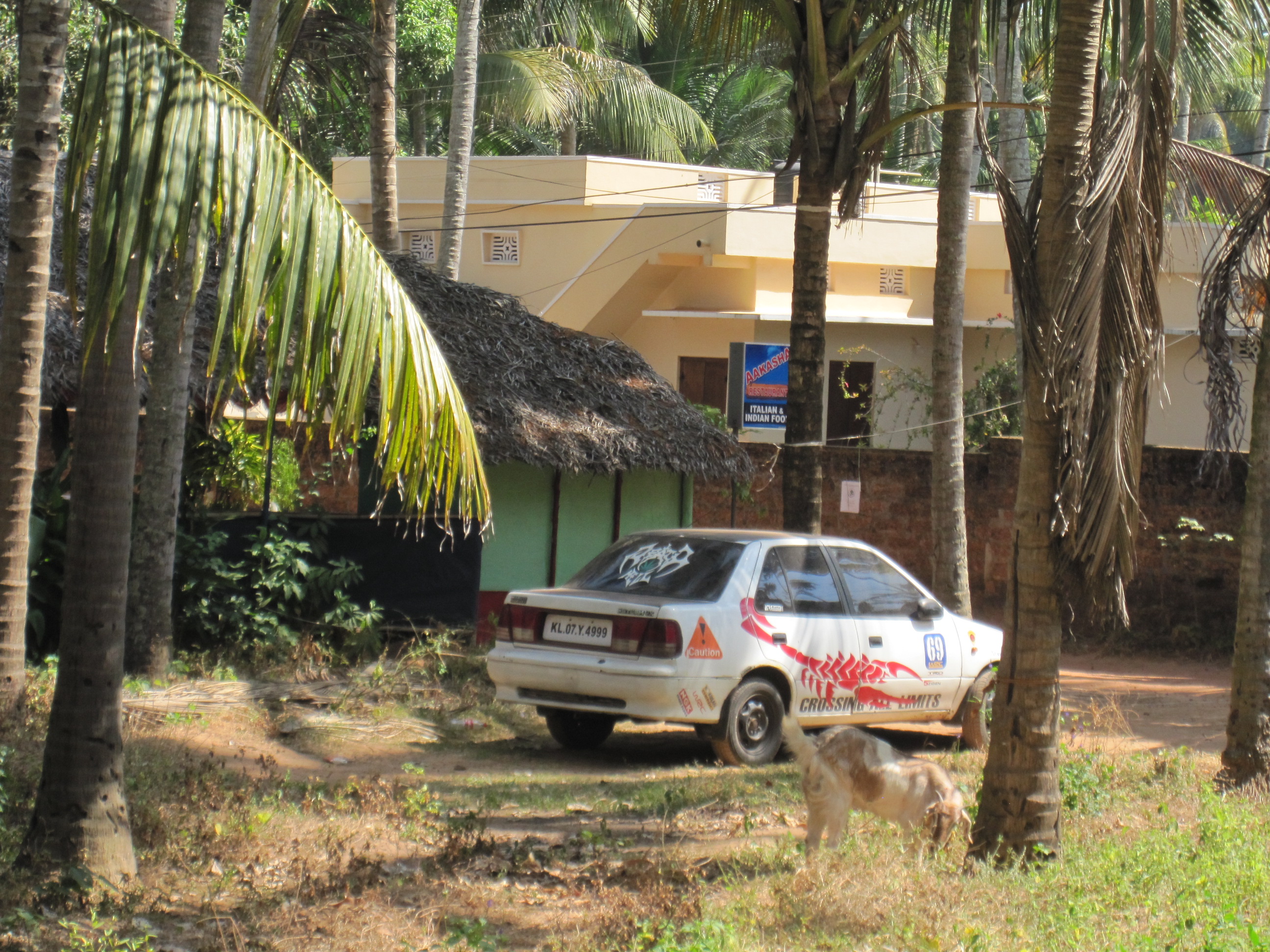 We did switch hotels again the other day, opting for another little change of scenery – further from beach but better walking, TV but no wifi (watch soccer instead of read about it), upper level instead of lower, bigger deck and, most controversially, a different view. The view from our previous deck was not what you would call “classically”, or “Kinsmen”, beautiful yet it did have a distinctiveness all its own. An overgrown empty lot, sporadic piles of garbage, the back of a nearby restaurant, a couple parked cars, one with a giant red scorpion on the side…its pleasures were most certainly subtle. But then there was Mad Goat Woman. Not every Varkala deck has a Mad Goat Woman, hell, not even every overgrown rubbishy lot, for that matter. I’m told most new lots in Willow Grove do, though. Nonetheless, we will certainly miss the way she would tie her goat to a tree each day before berating it for several long minutes, most likely warning it to stay close and be on its best behavior along with some not so gentle reminders about talking to strangers and/or how difficult it can be to digest and pass dirty plastic bags one may have decided to gnaw on over the course of a hot, sultry February day. We will also miss the inspirational dedication she would show by spending the next several hours collecting large dead leaves from around the neighbourhood which she would then present to our fairly indifferent goat, the one already surrounded by a huge variety of vegetation, with a dismissive toss and several more minutes of strongly worded criticisms in all likelihood (we have yet to magically ingest the ability to speak Malayalam) ranging from the dangers of teenage goat pregnancy (considered too old, in goat years) to why you should always start with a corner spot in Xs and Os, no matter how clever you think you are. Finally, to complete the entire picture of sentimentality and loss, there are her horrific facial features and the way her dimply rolls of fat emerge demurely from the carefully calculated gaps in her sari, like the translucent thigh of a fat biker pressing out from the deliberate tears in his oil-stained jeans. 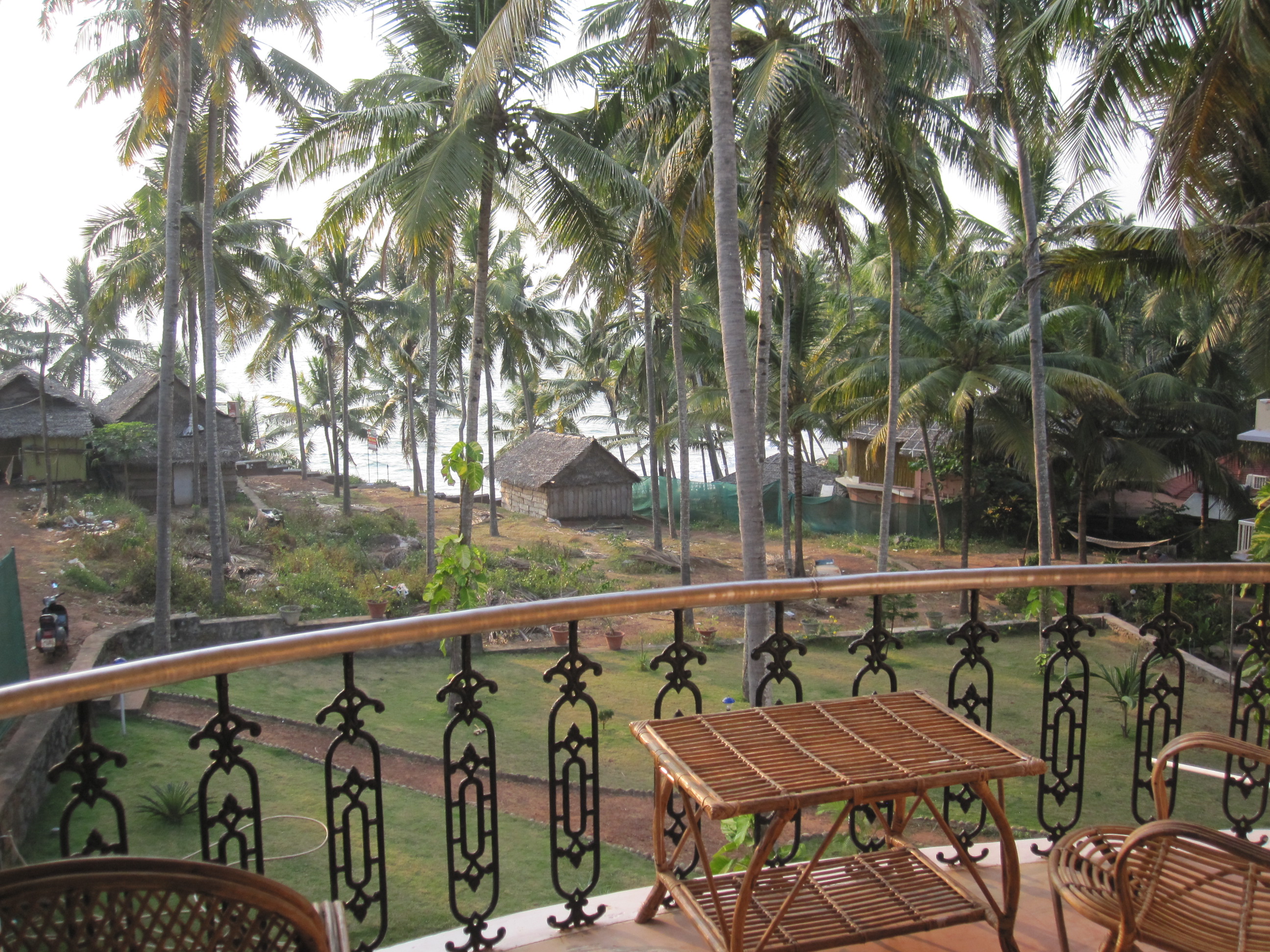 Then I went and got sick. Yeah, so much for “I suppose we’ve just been lucky, but we’ve never really had any stomach problems anywhere”. Never mind that I was following a strict diet of fried eggs for breakfast (universal) and a free-flowing mix of Thai and Italian food for all other meals. Delhi Belly, they call it. Even though we’re still almost 3,000 km away from Delhi. Or Traveler’s Diarrhea, to use the medical term. Why they had to focus the name so much on that part of the ailment I’m not sure, the same reason a headline will read “Will Ferrell Murders Prostitute!!”, instead of “Will Ferrell Gets Free BJ!!”, I suppose. Nevertheless, in addition to the so bluntly stated symptom built right into the name, I spent several wonderful days laid out in a tense fetal position anxiously battling fever, chills, headaches and debilitating stomach pains. The bright side was those days were already surprisingly free so we didn’t even have to shift anything around in our day timers. The down side, feeling just so…so…common. The Lonely Planet claims that between 30 and 70% of visitors to India end up with TD (I’m currently working on a detailed point by point comparison between the affliction and the goofy but likeable underdog Canadian chartered bank – they aren’t as different as you think) in the first two weeks. Setting aside the absurd vagueness of these numbers, it hurts to be so much like everybody else. So predictable. So transparent. So shaved head/neck tattoo combo. 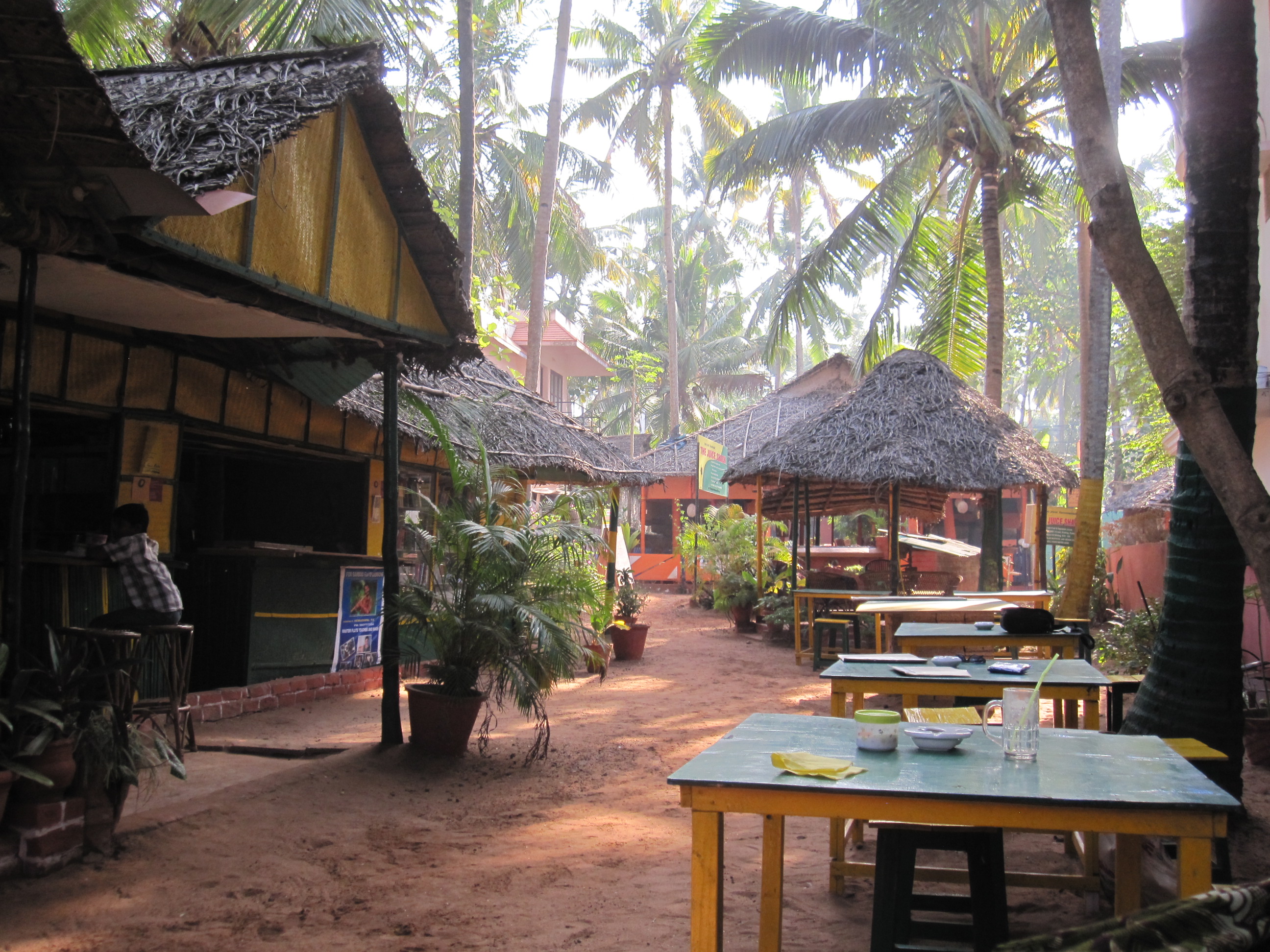 Although I suppose if I was being completely honest – which was not my intention, I assure you – we may also have been slightly on the run from some rather unpleasant events, traumatic happenings you might say, that occurred in one of our final nights at Saraswati. No, nothing to do with my toenails, not this time. Spiders! Again! Even bigger than the first time. Well, in fact there have been many spiders since that first rudely exotic introduction to Southern India back on Day 1 but all smaller, and most now dead (it’s early in the trip for me to have already reached the level of Stern Faced Efficient Killing Machine). Long story short (for real this time), it was about 5 inches across (from toe to hairy toe, so to speak) with a body the size of a golf ball. We chased it around earlier in the day but lost it, hoping it went out the door but secretly knowing it was still around…somewhere…lurking. Like Jack Black after the Teen Choice Awards. Then at around 11:30 pm, in our darkened room, while we slept on obliviously, he must have been making his way across the ceiling, or maybe the top of the curtain, possibly struggling from some indirect blunt force trauma picked up earlier in the day at the hands of a dusty blue Puma, when suddenly he let go, or maybe lost his purchase, we’ll never know for sure, plummeting 8 feet to land with a noticeable thump and bounce, legs now tangled slightly in a long mane of brunette hair, before disentangling itself to lay inertly on the pillow as its now alarmed pillow buddy struggled to her feet in search of a light, apparently in shock trying not to wake her husband still sleeping a couple feet away. But then there was light! And her worst fears were confirmed! And death, wild shoe-throwing death, rampaged among the sheets of the Saraswati, and innocence was lost forever. 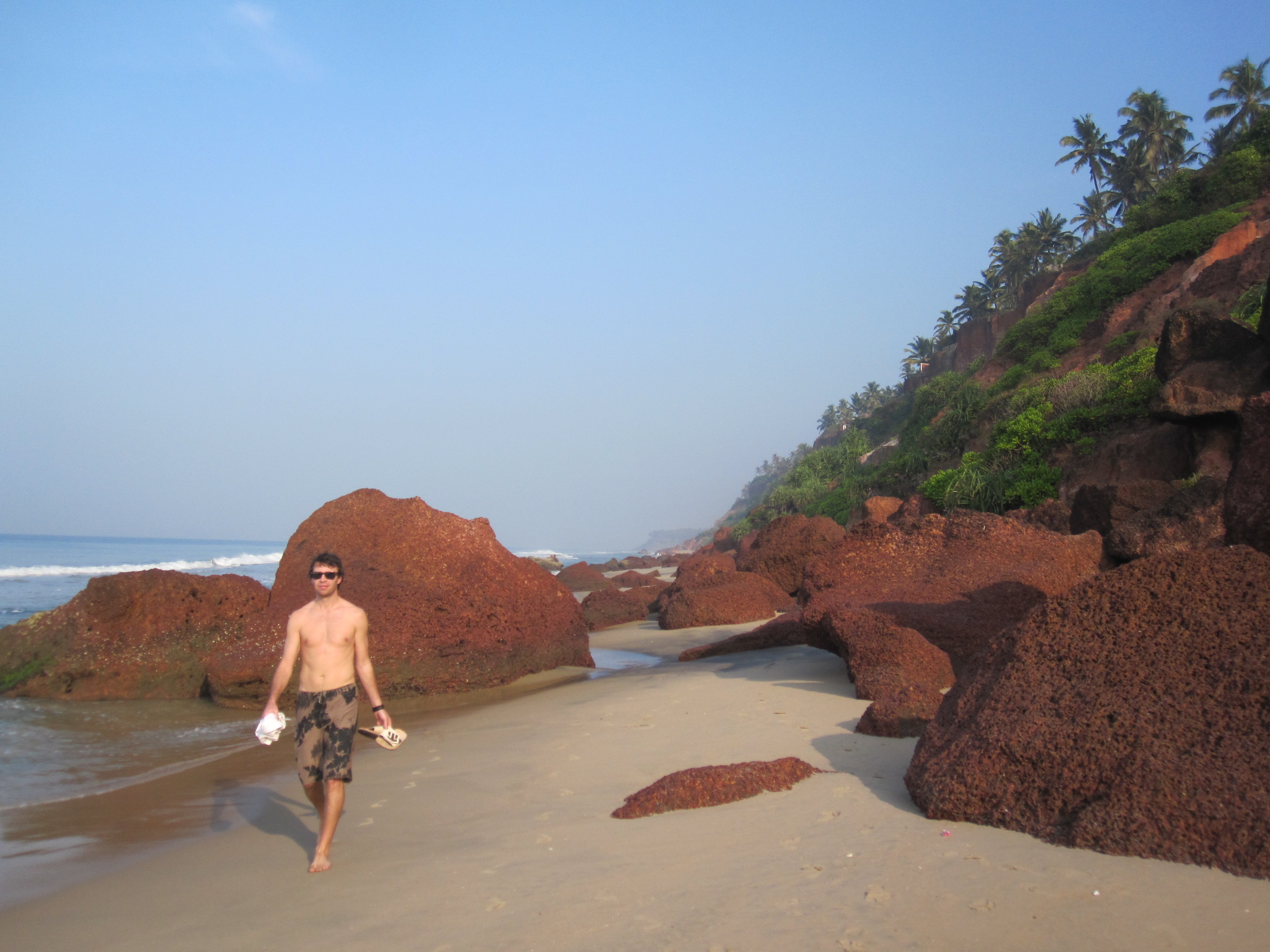 So, as you can tell, we’re going to miss the old place. Although in our new room we get to watch previously unseen episodes of “Psych”. So it’s more or less a toss-up.

Now for some new additions to our:

We rented an umbrella from him on the beach, offhandedly suggested we may be interested in renting a boogie board at some vaguely indeterminate point in the future we casually referred to as “later” and next thing you know we found ourselves being tenaciously prodded and cajoled to choose colours, set exact times, engage in blood oaths to not deal with other boogie board pushers, eventually making intimate dinner plans and, I believe, promising to hold back the foreskin at his next son’s circumcision. And to be steady about it, too.

I have six pairs. But, as I so patiently explained to Laynni, some days I only wear swimming trunks, so… 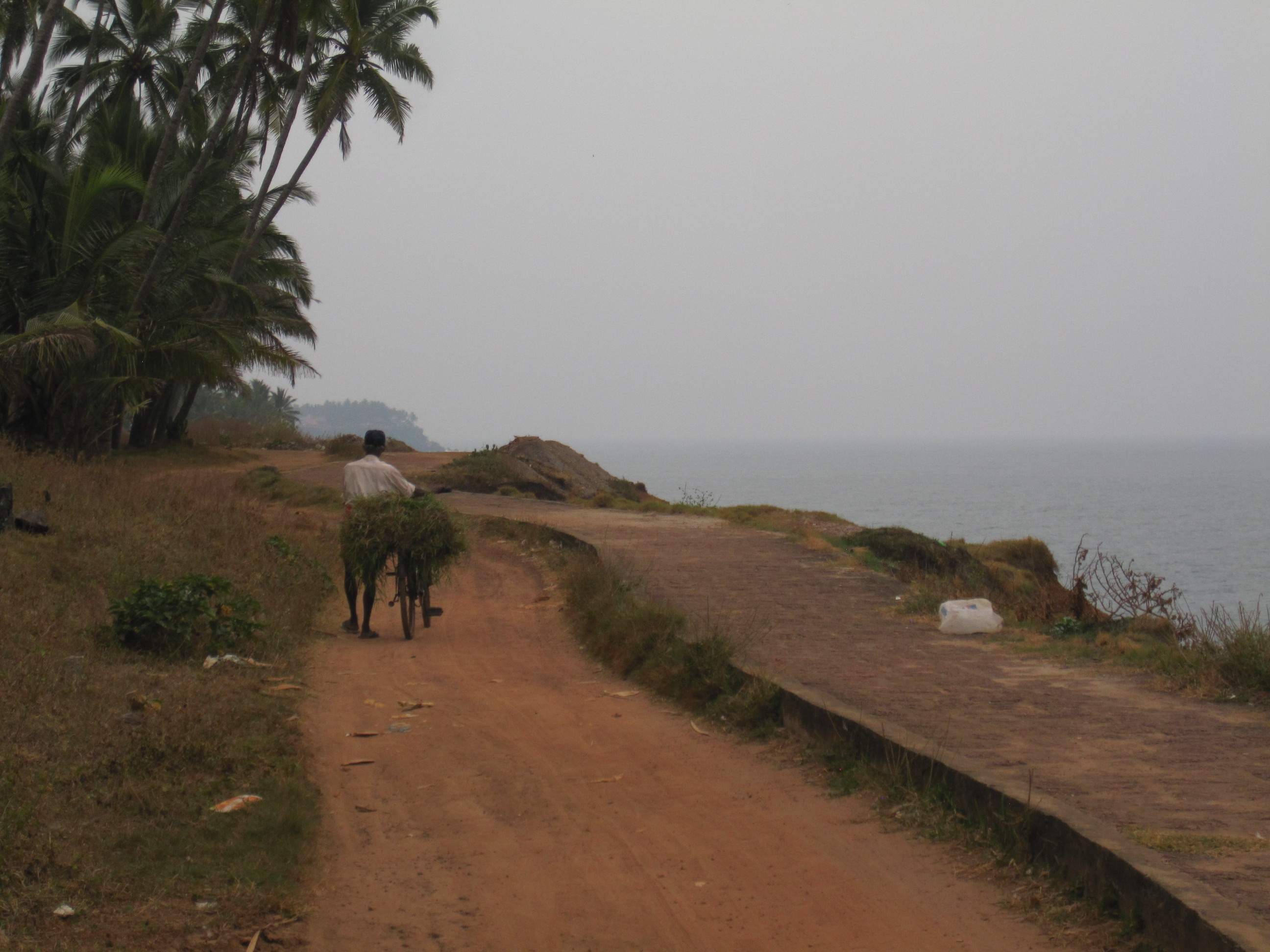 Based on both my research and a real search, to the best of my knowledge the Super Bowl was not televised in Varkala. Maybe not in India. Not live at 5am, not delayed to a more reasonable hour, not as part of a sports blooper clip like we do with Japanese game shows. Epiphany moment, right there. It is hardships like this that really make a person realize how privileged we are in North America, where millions and millions of people sit blithely around on their sectional furniture eating chips and dip (made with real Trans Fats), watching their giant screen TVs, taking for granted HD so vivid that they can tell at a glance exactly how much bigger the Left Guard’s left testicle is than his right, drinking beer that comes in a reasonably sized bottle with no shrimp pesticide, all at a pleasant moment in the early evening, not at some ungodly hour normally reserved for perverts, degenerates and dairy farmers. For 99% of those carefree drunks it won’t ever even cross their mind to think about the poor traveler, lazily wasting his life in India, complaining about too much sun and Thai Fried Rice that wasn’t quite spicy enough, and how he might be suffering, powerlessly staring at his netbook screen waiting for ESPN Gamecast to update, making due with the most rudimentary of descriptions (“TD GB – 15 yd pass / Rogers to Jennings”) only to realize the internet has cut out again and he is going to have to start over and, shudder, sit through the entire trailer for Gulliver’s Travels again. These, my friends, are the truly forsaken. Where’s that portly Sally Field now? Huh? Huh? 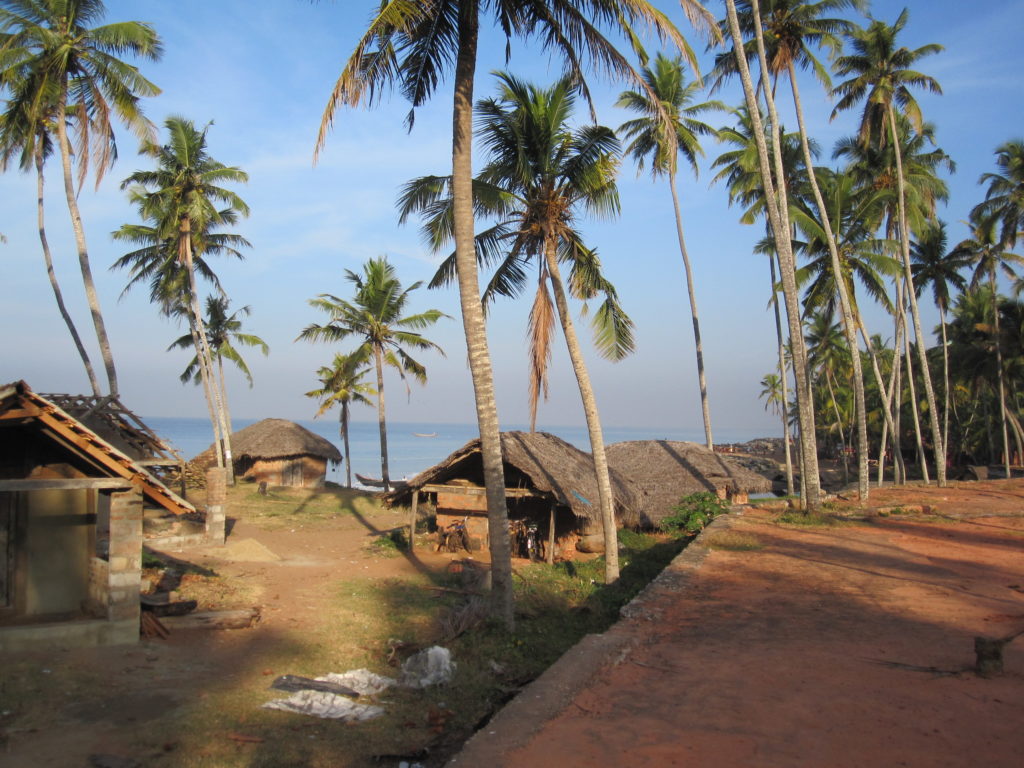 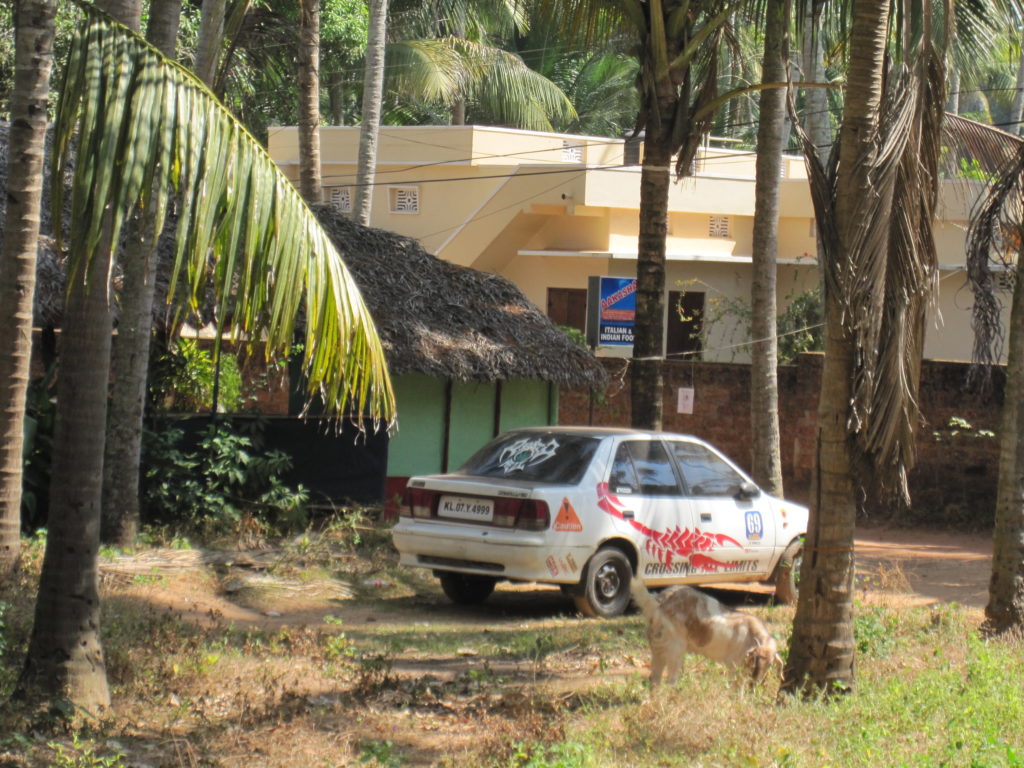 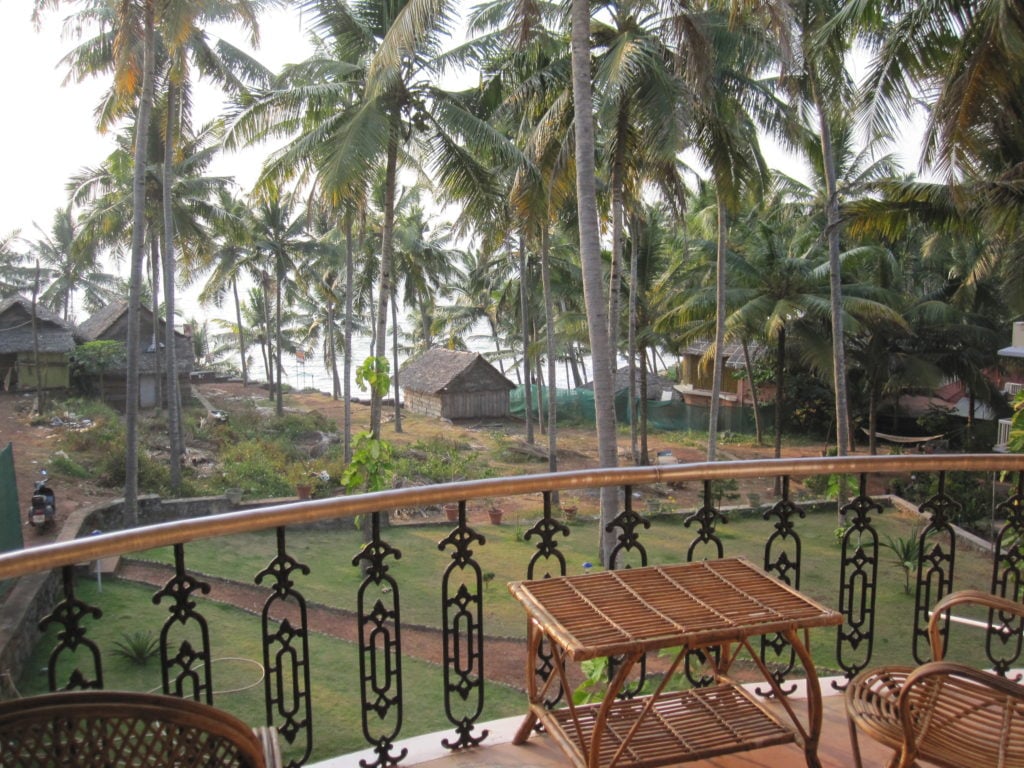 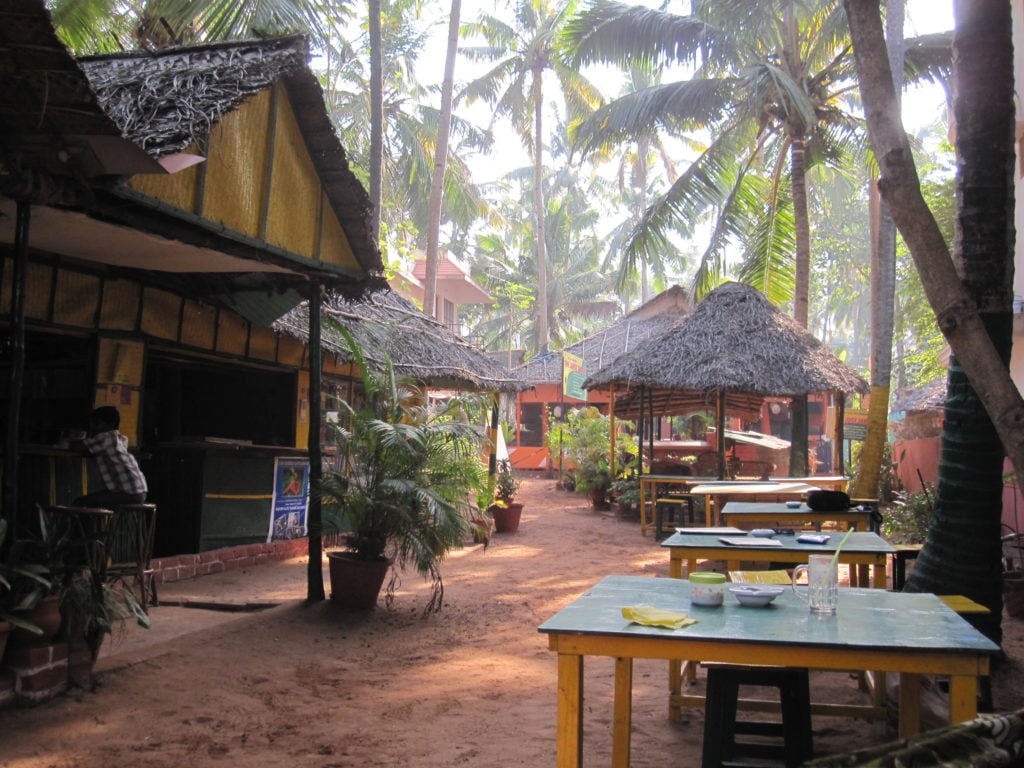 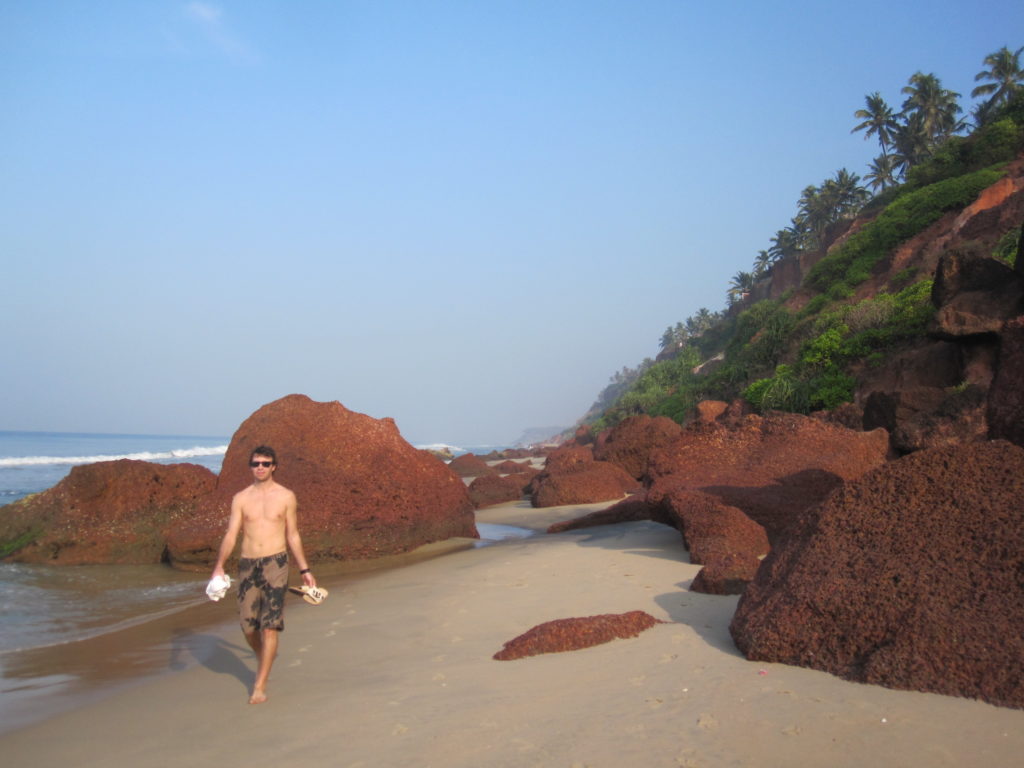 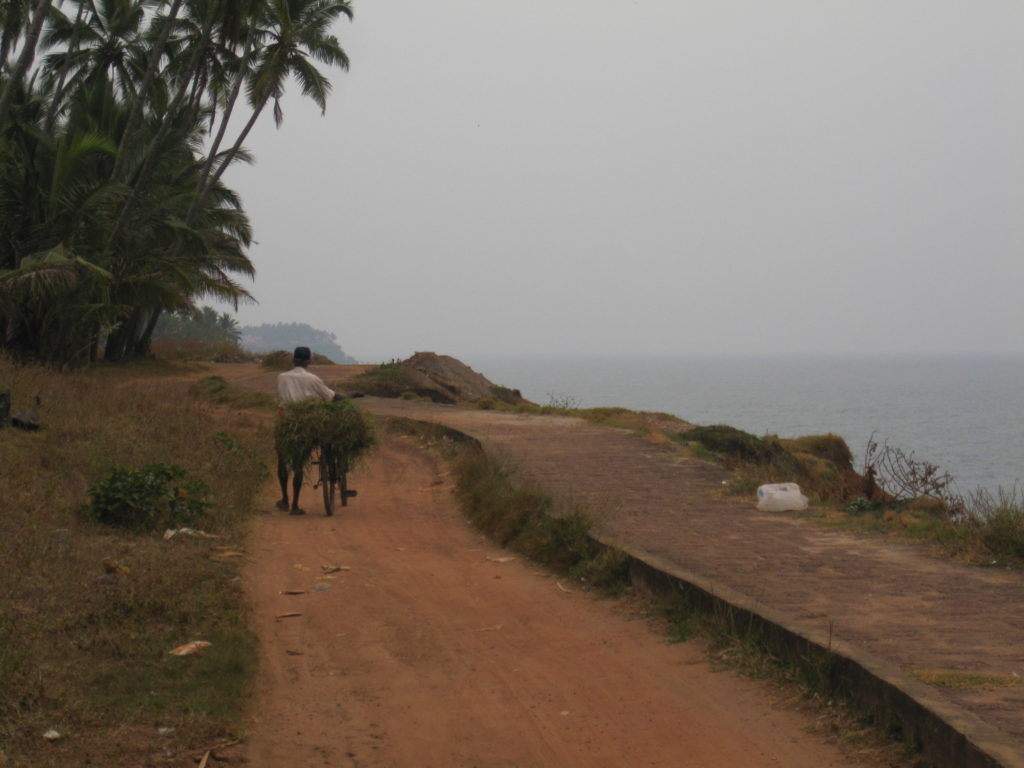