Considering just how informative our last entry was I should probably recap things quickly and bring everyone up to speed. After spending a few days practically reinventing the word relaxing at Byoona Amagara on Lake Bunyoni we eventually hit the road again for a long (ever so long…) journey into the capital city of Kampala. Once there we reacquainted ourselves with the miracle of internet and did some none too shabby shopping which netted us a new band for my pink watch (the whole pocket watch thing was undermining my masculinity faster than Laynni’s money belt) and new netbook to replace the one liberated from our care in Rwanda. And there we found ourselves, reinvigorated by mall food and wireless connections, ready to embark on a three-pronged plan of attack for our final 10 days or so in Uganda, culminating in the incomparable Sipi Falls.

Took a three day, two night tour organized by the good people at Red Chilli Hideaway up to the northwest section of the country and one of Uganda’s most popular tourist attractions – Murchison Falls National Park. We were joined by 5 sociable Brits and one focused Chinese guy named Paul. After the long drive up we started with some hiking around the eponymous falls themselves, enjoying a number of extraordinary views of the place where the mighty Nile is suddenly squeezed into a narrow funnel of rock just 7 metres across, apparently making it the most powerful waterfall in the world. From certain angles we could watch the commanding force of the river come careening towards us through the thin gap like some contrived Hollywood flood, crashing through with the reckless intensity of a Mattress World commercial, or a John Stamos love scene.

Day two started with our very first game drive (technically we walked to see the gorillas) through the surprising acacia-studded savannah of the park. Reputedly nothing compared to the big parks like the Serengeti and Ngorongoro Crater, which we’ll be visiting later this month, we were stunned by both the volume and variety of the wildlife on display. It started with a herd of elephants just a few minutes in and was capped off by an apparently rare meeting with a pair of lions, casually hiding out in the shade and looking for all the world like a couple oversized housecats after a good meal and a piss on some hockey equipment. In between we saw giraffes, hartebeest, bushbuck, warthogs, antelope, hippos, more elephants, about a million birds and several other pop-up vans full of wide-eyed, khaki-clad gawkers. It was like looking in a mirror, if mirrors added Tilley hats, zip-off pants and binoculars the size of a baboon’s red arse cheeks. We also learned a number of interesting facts, such as giraffe were never poached as badly because of the strange discoloured patches that occasionally develop on their fur and which uneducated poachers of the old days used to take to be leprosy. Of course, with all our modern advances in medicine, we now know full well that these patches actually symbolize their unwavering support for lion poaching. After lunch we moved our camera-laden crew to the river for several hours of a leisurely cruising along the banks of the White Nile. More hippos, more elephants, even more birds, and a few big crocodiles thrown in for good measure. Later on we relaxed over a few beer and Laynni indulged in one of her favourite pastimes – instigating a drinking game before announcing halfway through that she doesn’t care if she loses, she’s only having the one beer anyway…

Day Three: Ziwa Rhino Sanctuary. Long drive, short hike, a massive female white rhino and her almost equally massive 1 ½ year old son still breastfeeding at more than a thousand pounds, then they settled in for a nap, and we moved on. Rewarding, but not necessarily exhilarating, kind of like beating up a diabetic pediatrician.

A more subtle, spread out set of falls a few kilometers downstream from Lake Victoria and the official Source of the Nile (the local joke is that the same name applies to the Nile Special brewery – hey-oh!). We were happy to even get the opportunity to see it at all, considering that as of December the new title “Bujagali Dam” will have replaced “Bujagali Falls” on the letterhead. We checked in for a full day of whitewater rafting adventure that would see us float, paddle, buck and tumble down 30 kilometres of the infamous river varying from limpid pools to raging Grade 5 rapids. It started out slow and easy as our guide ran us through all the drills, most of which seemed to involve what to do when, not if, we were either capsized or thrown from the raft individually like so much unwanted cabbage. The water was as warm and cloudy as an old man’s urine and, to our amazement, the similarities didn’t end there, with the river’s moodiness and uncertain temperament mirroring that of so many of our polyester-clad pensioners. The falls themselves are really more of a vast jumble of rapids than one distinct fall, although the 15 foot drop we braved amid crashing thunder and pelting rain in the menacing shadow of a craggy bat-swarmed island certainly managed to etch itself in the mind. 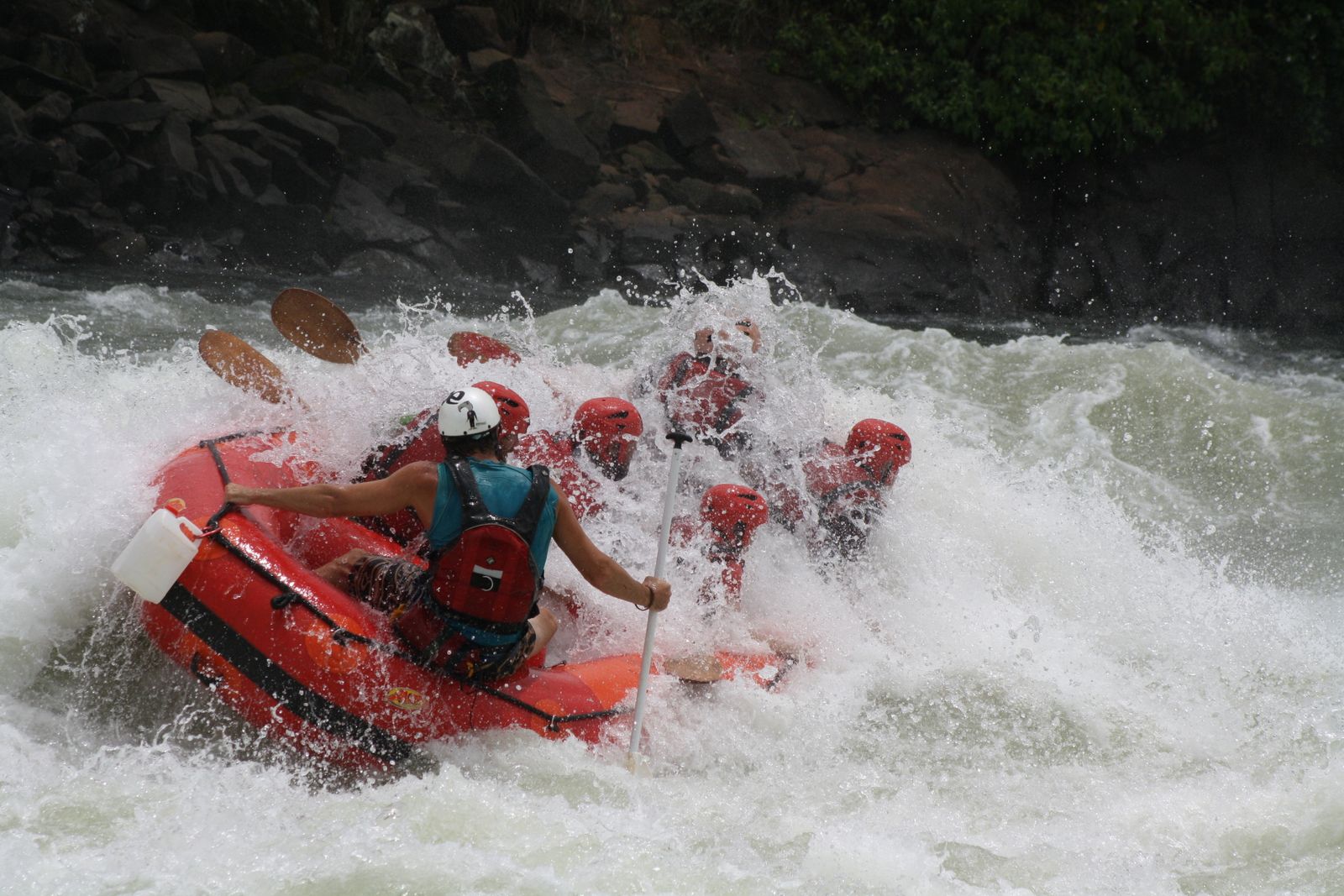 Bumpy and irritable but easily managed as though dealing with soup that’s too hot, or an insolent paper boy.

Volatile and unreasonable like he’s been startled out of his 9 am nap prematurely, or hasn’t moved his bowels since his last hangover.

Mostly docile but always with an undercurrent of labour and the occasional phlegm-y snore. Especially difficult for our sister raft, manned by a group of indolent Arabic UN officers whose paddling was about as effective as convincing our metaphoric old man that inflation is an economic principle rather than a conspiracy perpetrated by baggy-trousered youths narrowly aimed at sabotaging his ability to purchase tartan slippers.

Unpredictable, irrational and ominous like a late night trip to the pharmacy or a discussion about coloured news anchors.

It all comes to a close with a humbling reminder of nature’s power, and the soft feeling of release followed by a vulgar plopping noise that could only signal some long overdue bowel action or me, donating my wedding ring to the whims of the Nile.

Two cramped, sporadic matatu rides, one with 17 of us crammed into a 7 person van and my exceedingly close neighbor breastfeeding her already earring-ed child on and off, led us from Jinja to beautiful Sipi Falls, hovering in the cool green foothills of Mt. Elgon and snugged up tight against the Kenyan border.

Boasting an embarrassment of scenic riches – no less than 6 stunning cascades decorate the dramatic landscape of rugged cliffs, verdant valleys and icy streams. No question, however, that the showstopper is the lowest of the three that comprise Sipi Falls itself, where the unsuspecting river suddenly begins its long journey down to the jagged rocks over 90 metres below, tumbling over the craggy escarpment with the unrestrained freedom of an African breast, and with the same slow but inevitable submission to the forces of time and gravity.

The entire grounds of Lacam Lodge, including the raised beds, were all designed with this amazing spectacle in mind, although their mysterious decision to withhold all methods of seating, comfort or relaxation from the otherwise carefully prepared viewpoints seems to make about as much sense as nipples on Kate Hudson. It’s possible, however, that contradiction is simply their thing, case in point being the luxurious bandas featuring bucket toilets, tremendous food but no cold drinks, 24 hour wood-fire heated water but not one iota of electricity. In fact, to find any power at all we actually had to walk all the way into town and follow some kid’s vague directions to a tiny, ramshackle 5 ft x 5 ft hut that was only distinguishable from an outhouse through the small faded picture of a strangely delighted man receiving a sharp flat-top cut. Inside the “barber shop” we added our laptop to the jumble of around 20 cell phones attached to at least a half dozen power bars bristling with less than safe-looking adapters. Welcome to the Sipi Falls Power Station – $0.45/hour. Long story short, she kept most of her teeth but for the rest of her days struggled with an unholy attraction to flan.

I was unable to find a senior citizen’s parallel for the rather uncomfortable incident on the Nile which found Laynni dangling from the back of the raft like a sheepish prehensile tail seriously challenging the record for longest pee of all time while the rest of us stared pointedly forward, struggling in vain to fill the increasingly uncomfortable silence. Thaz m’lady. 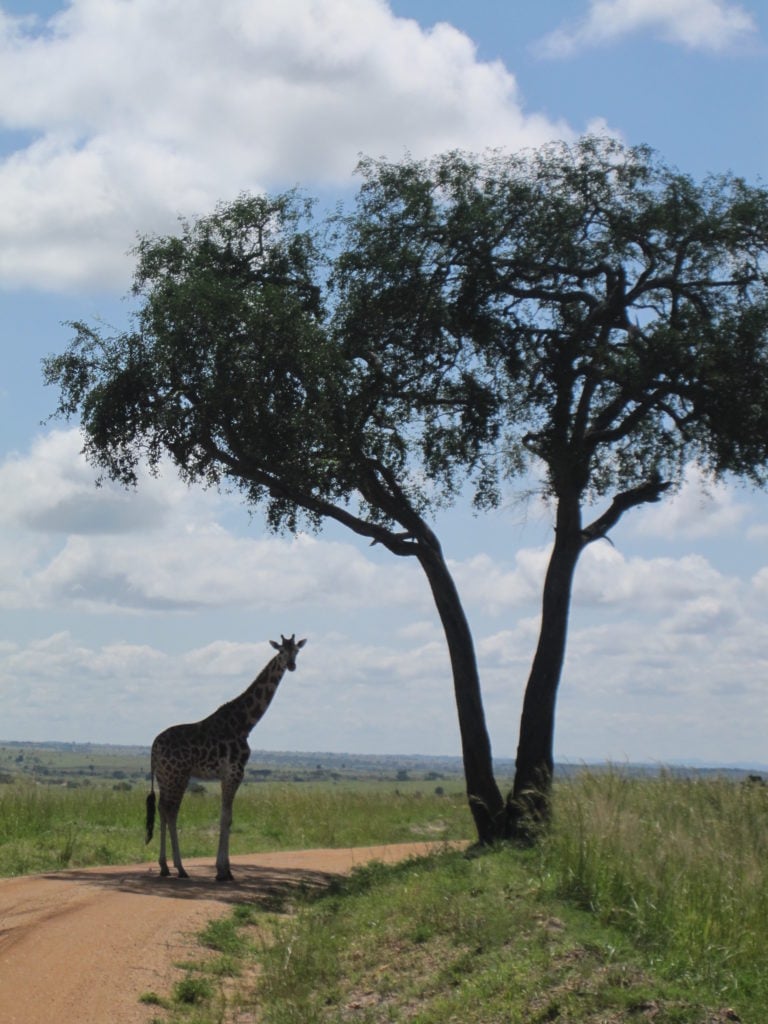 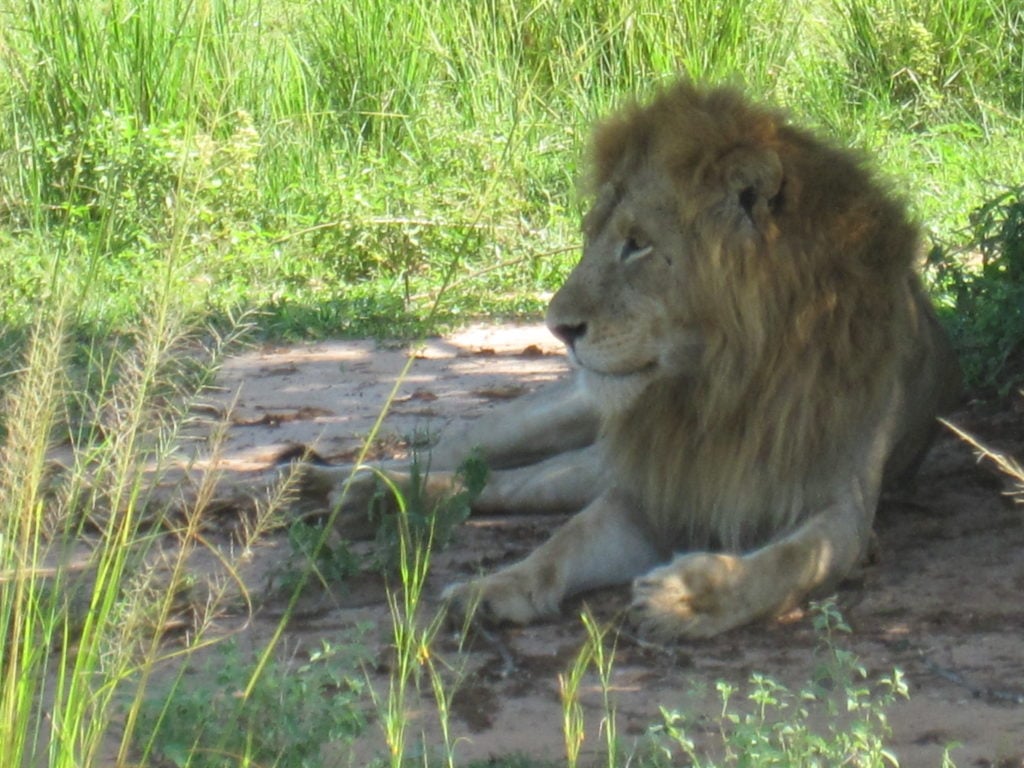 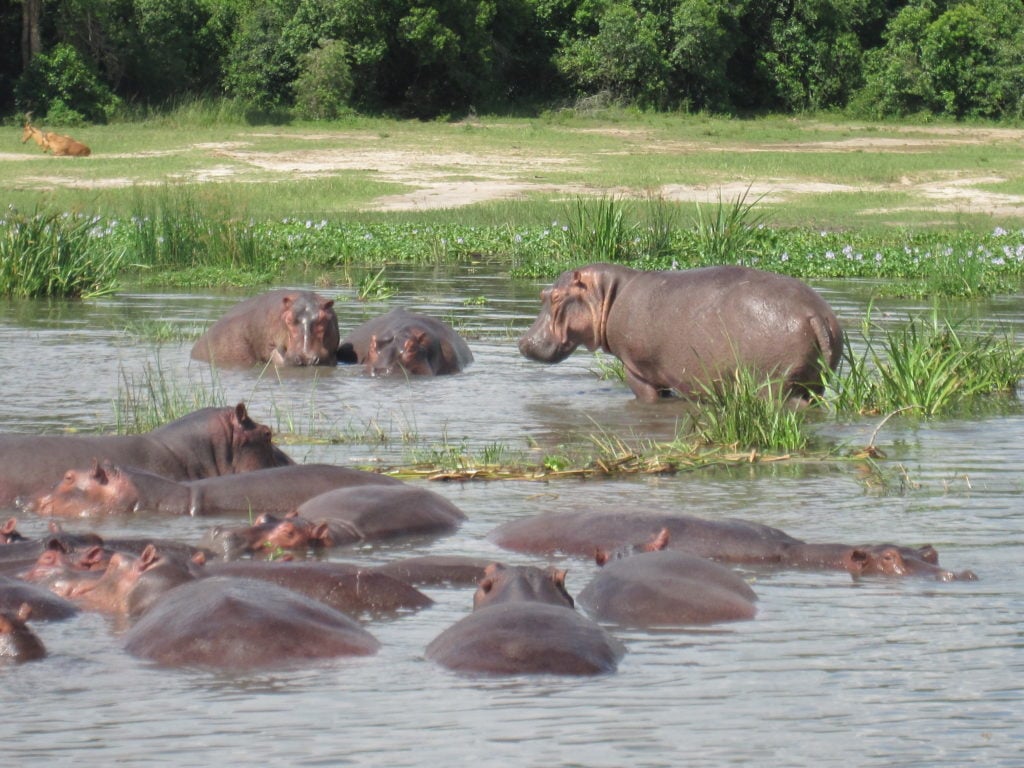 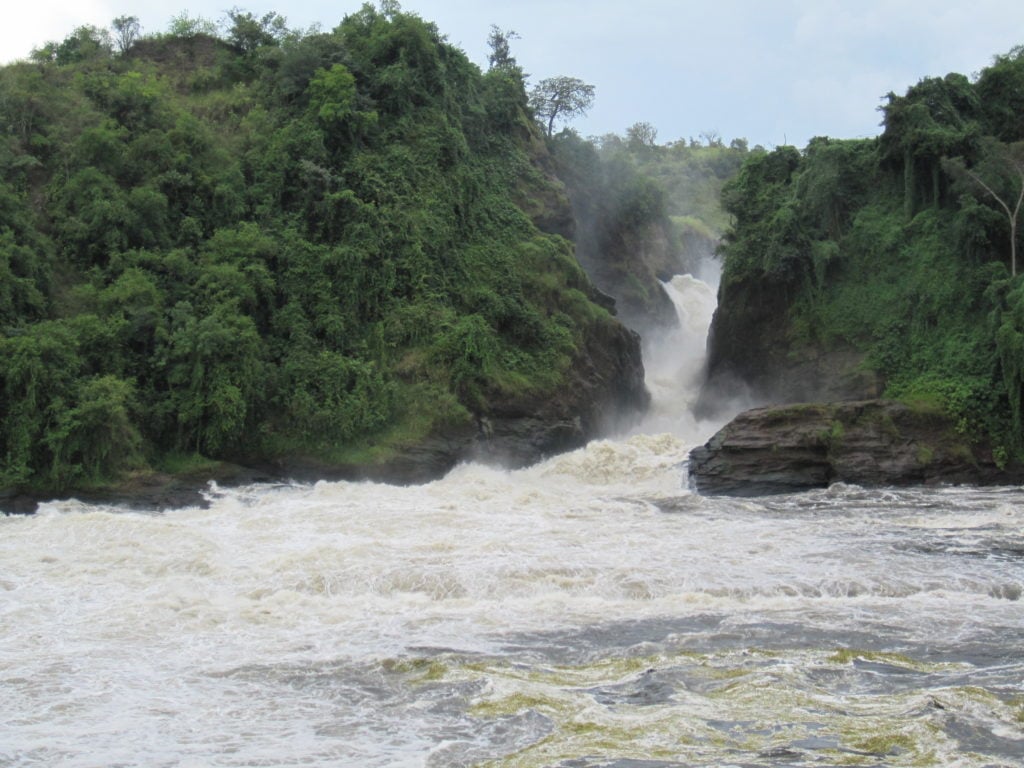 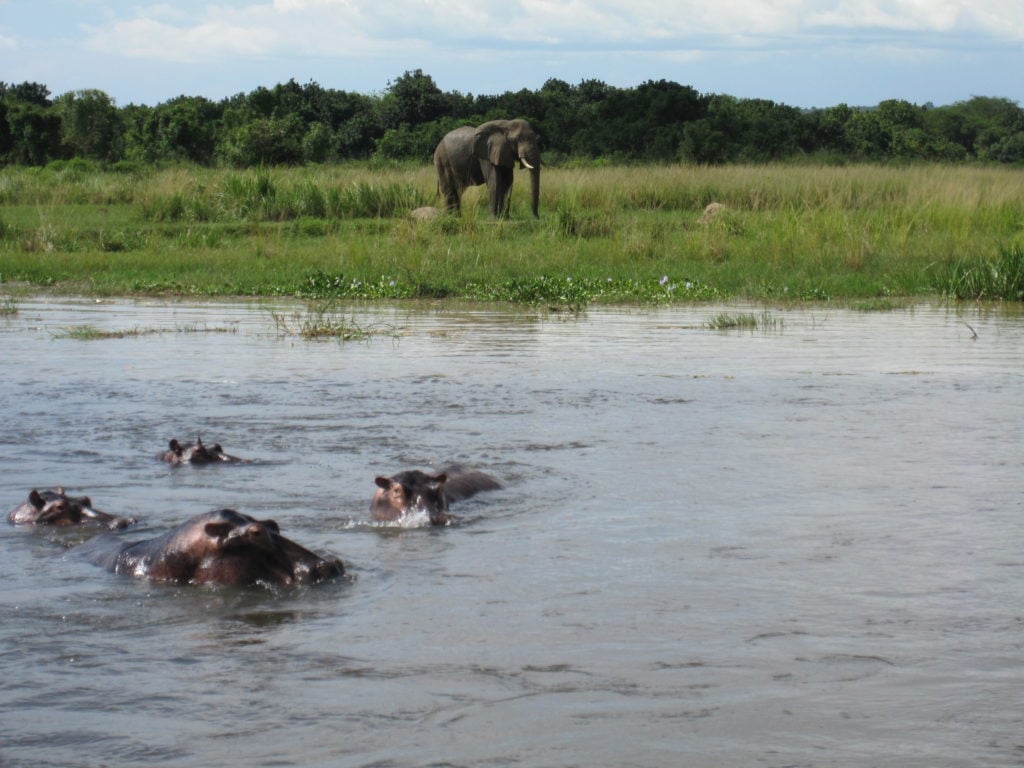 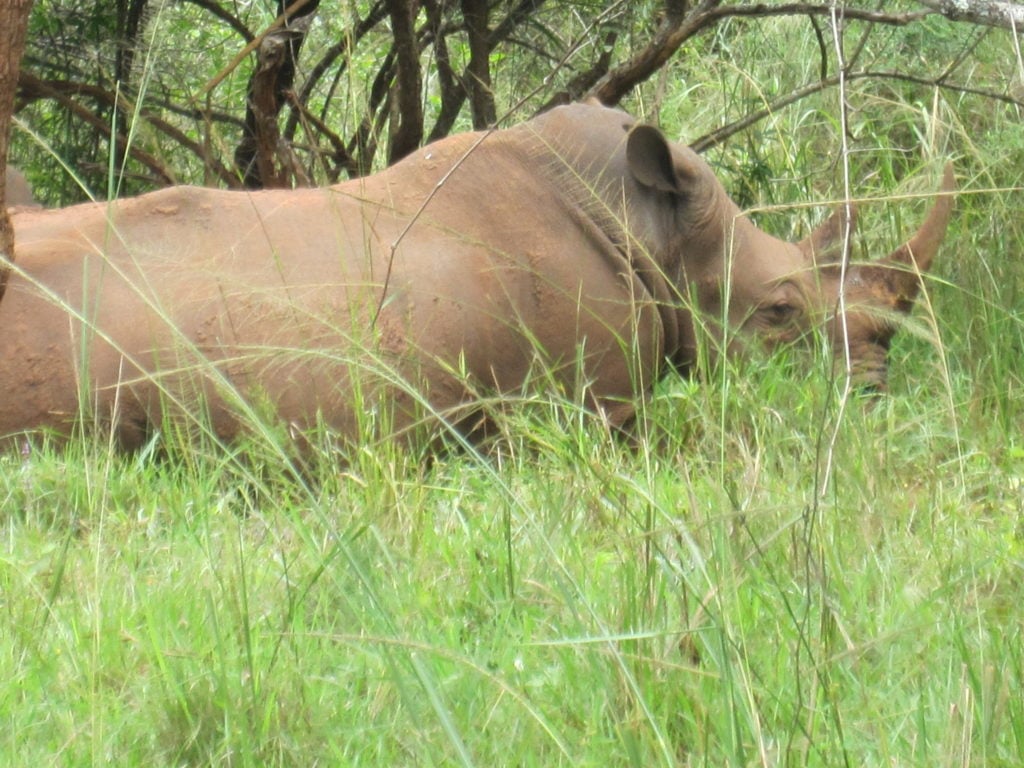 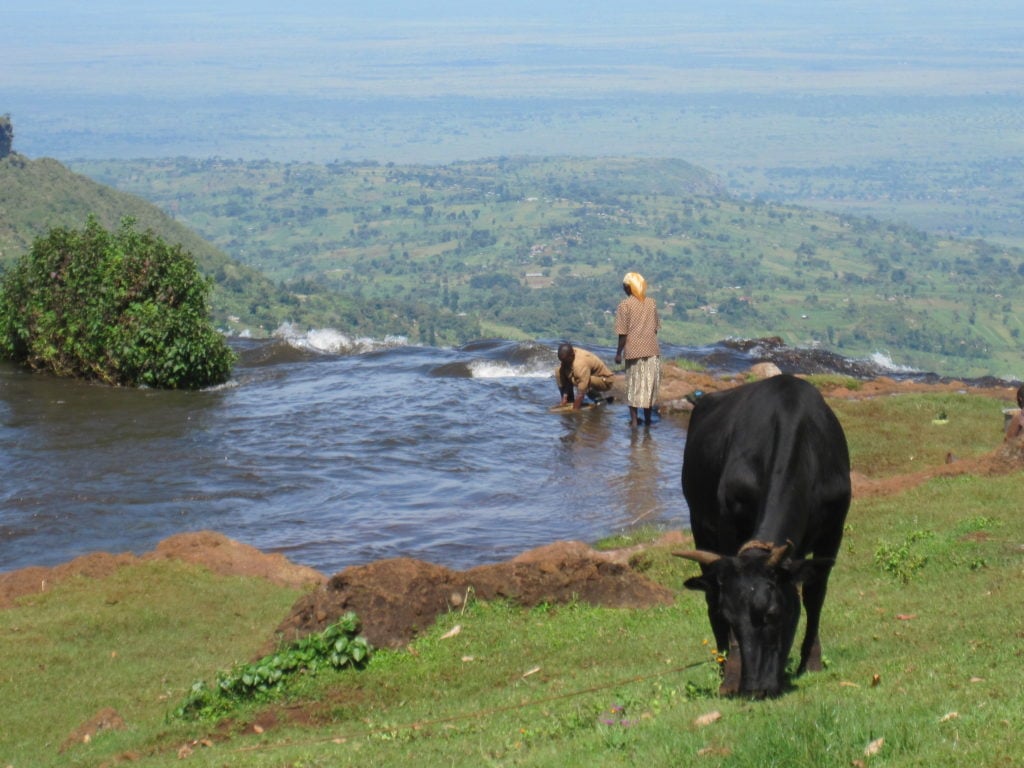 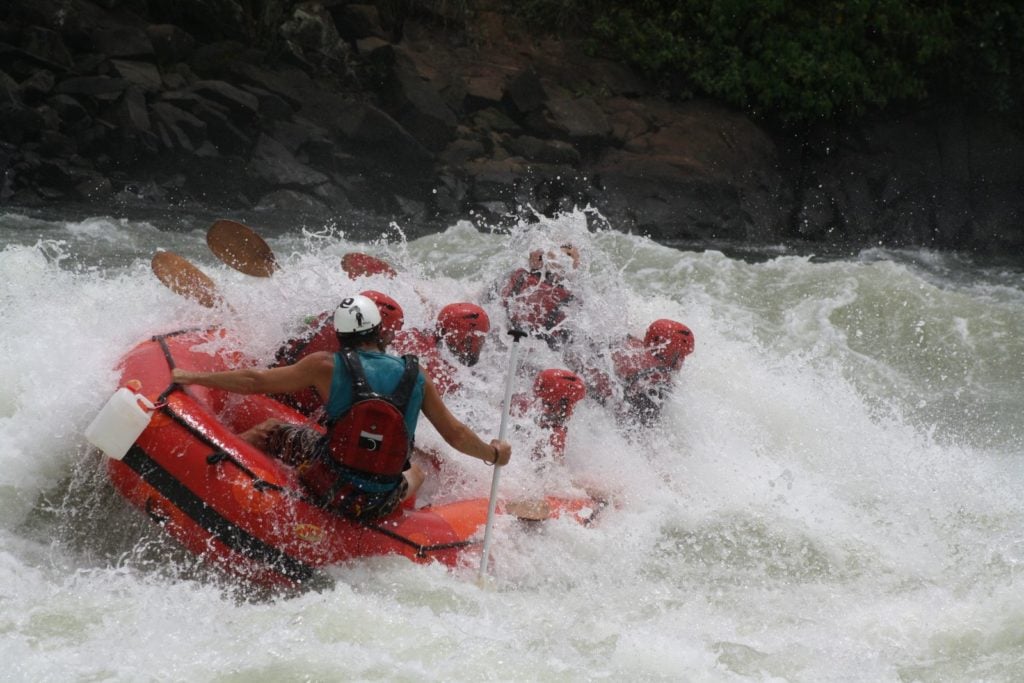 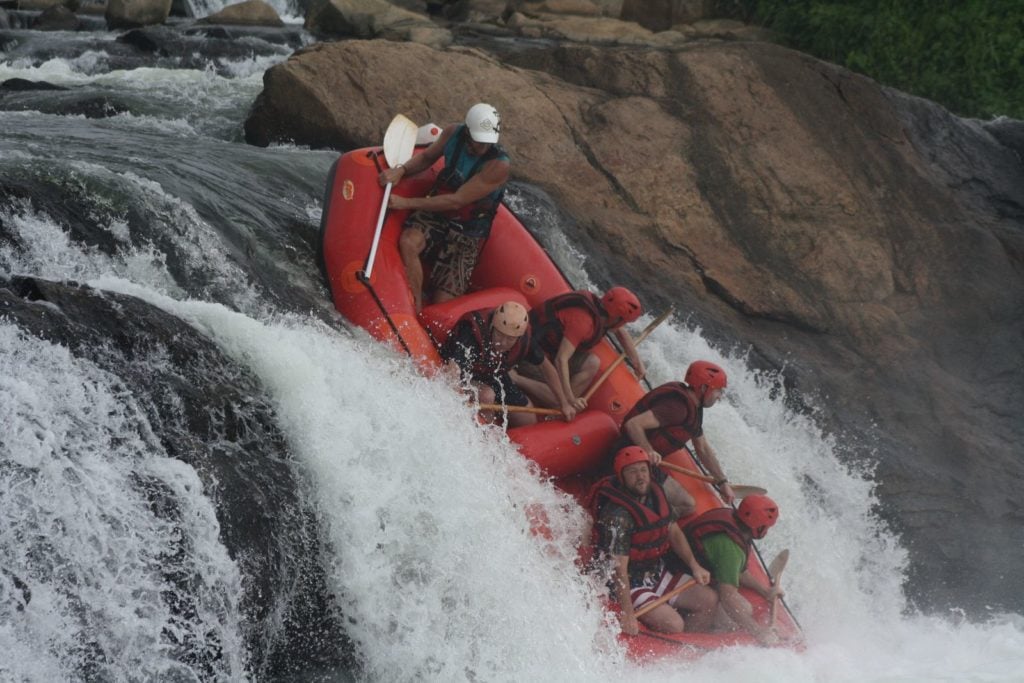 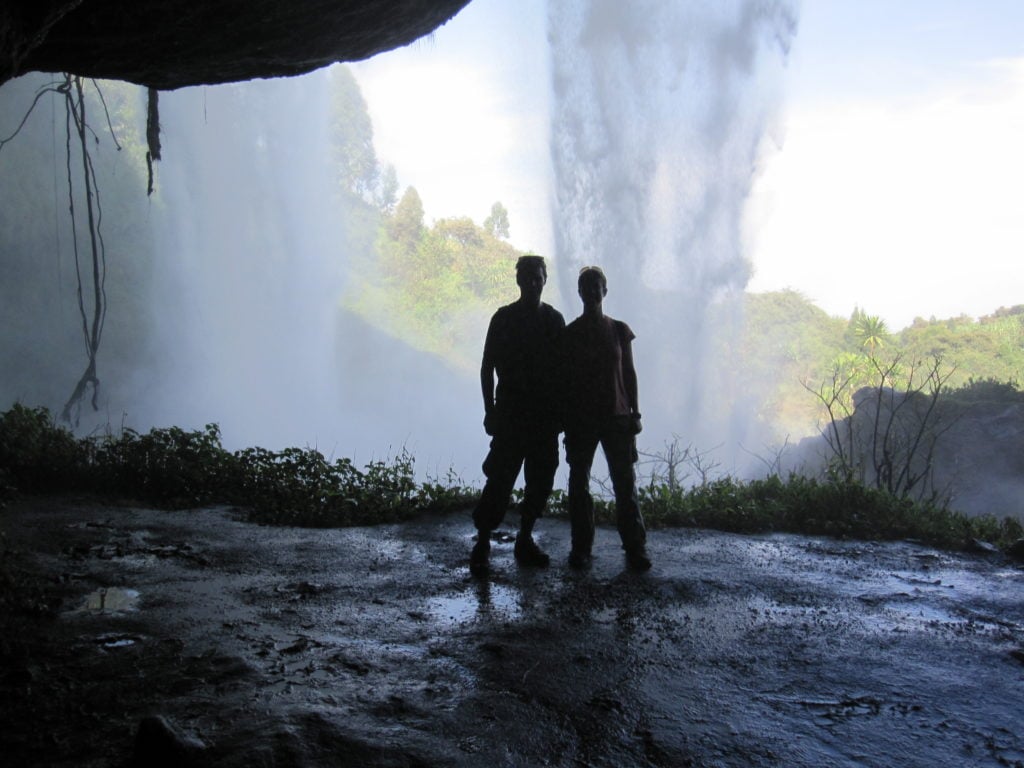 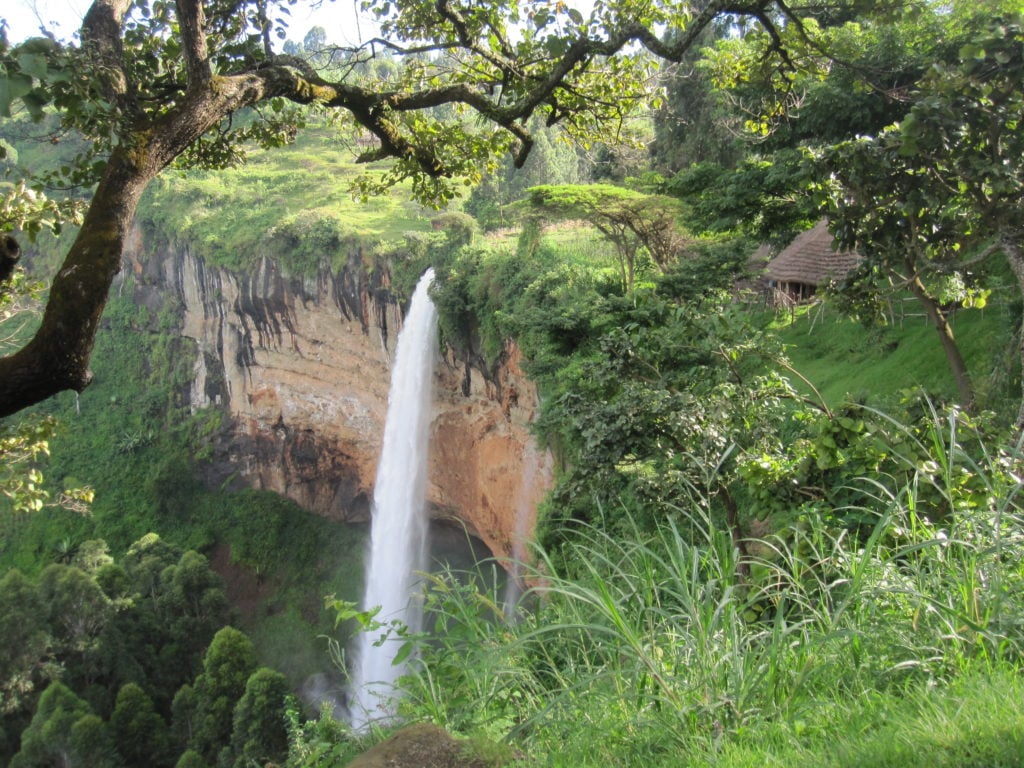