The Lovely Janet Guide to Mirleft

A messy little village spread haphazardly near a number of beaches and surrounded by spectacular cliffs, Mirleft is incessantly pounded by crashing waves and teems with young Moroccans playing football on the wet sand and occasionally squealing in strangely high-pitched voices. Surfers come for the uncrowded and largely untouched waves, the touring campervans for the warm weather and tremendous views, and the European expats for the opportunity to go from being an unremarkable drunk in a big pond to a massive drunk in a small, otherwise alcohol-free, pond. The fishermen come for, well, the fish.

Blessed by a mild climate all year round, Mirleft is a perfect place to escape from a cold northern winter. And seemingly as though it were planned, winter is also the time of year when the waves are at their best and biggest, or possibly most frightening and generally unpleasant, depending on how much you enjoy swallowing vast quantities of sea water against your will and having your head dashed repeatedly against the sandy ocean floor.

Summer is hot, the waves are replaced by beach-bound families looking for ways to get their holidaying children out of their hair occasionally and Paris is too hot and muggy anyway so, you know, why not? 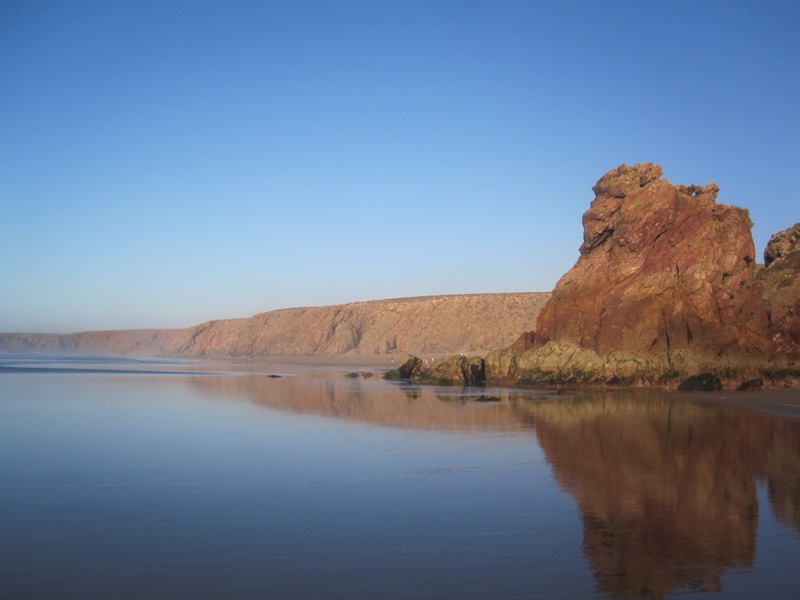 The main part of town sits just east off the highway right after the large valley running down to the Grand Plage (Big Beach). I think. Or maybe it is further north, just west of the highway between the road and the ocean. Or is it that rapidly spreading development along the cliffs overlooking the beach? Or maybe that odd jumble of buildings way up on the hill next to the old kasbah ruins? Hard to say. All we know for sure is that most of the shops and guidebook described “beckoning cafes under the pink and blue arches” of interest to tourists are on the dusty street that curves up from the highway. And that “pink and blue” are optimistic descriptions of those faded stretches of concrete, “beckoning” is mostly relative to the trash-strewn alleys and jumbled grand taxi lots, and the arches probably aren’t at all what you’re picturing.

Most tourists will prefer to stay in Les Amicales, along the cliffs, but be warned that there are no shops out there, just one sporadically open restaurant and a couple kids who have been suspiciously raising money to buy a team football for at least 3 years judging by the sorry state of their tattered old pledge sheets. 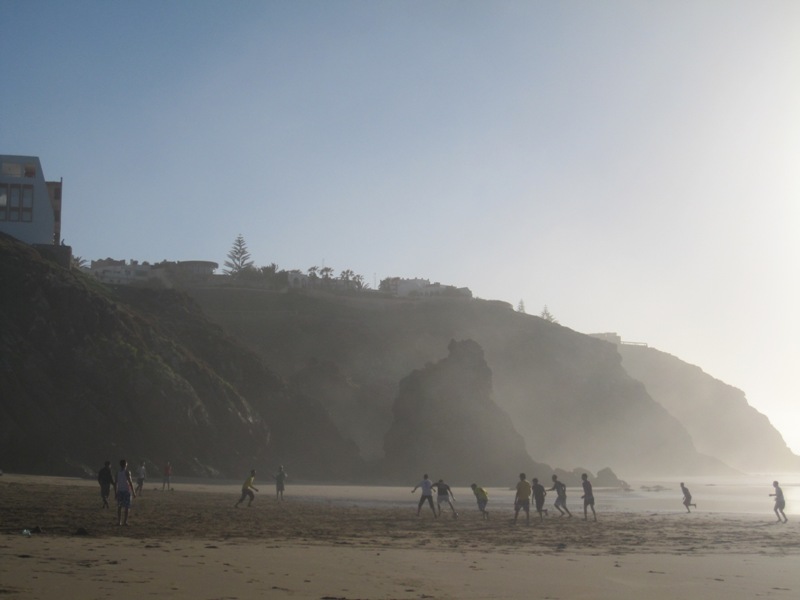 Most hotels and some of the restaurants have wifi and there is a dingy “cybercafé” full of reasonable facsimiles of 20th Century desktop computers.

Every 30 metres or so you will spot a sign advertising “coiffures” next to a hand-drawn portrait of a man with a frighteningly thick helmet of short black hair and features reminiscent of a fugitive Libyan dictator following facial reconstruction, numerous botox injections and a disappointing loss by their favourite football club.

Some hotels offer laundry services, or you can stand on the cliffs with your arms spread and let the salty ocean breeze gently waft through your damp armpit areas, slowly whisking away sweat and other unwanted odours.

Be warned, though, they do tend to come right back after you head inside. 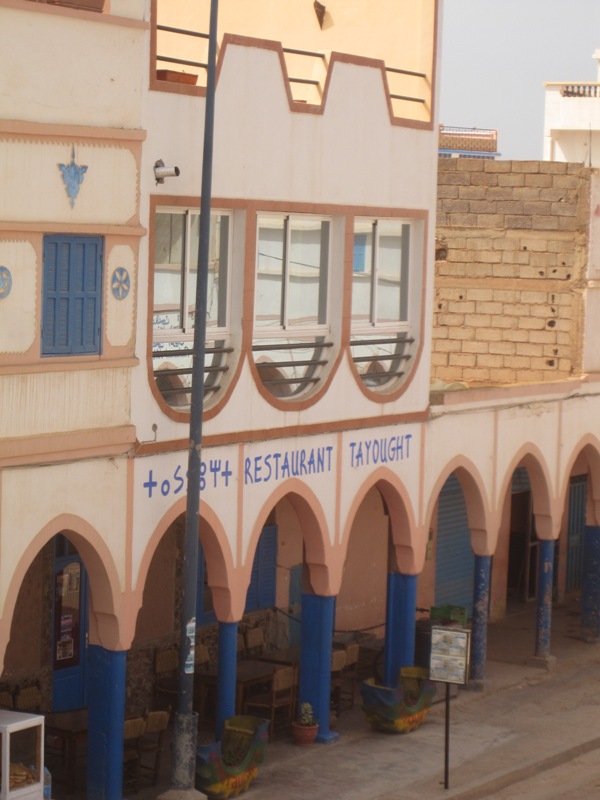 There is an ATM along the highway just south of the taxi stand. It isn’t likely to give you any money, though.

Comprised of just a couple roughly patched tents in a gravelly lot next to the taxi stand, this extravaganza takes place in early March and features some promotional development material and a couple shaky videos of guys trying to wave to the camera while surfing. Back in 2009 the rest of the world got together and insisted they add the quotation marks to “International”. Attendance is by fake invitation only.

The coast around Mirleft is rife with empty waves just waiting to be conquered and tamed like a recalcitrant shrew that’s recently outgrown its metaphoric britches.

There are numerous private surf guides around that can lead you to the best breaks, and 2 surf shops – one in town with a couple of old boards molding out front, the other on the beach road with a couple of old wetsuits molding out front. In either one you should be able to rent some odd-smelling gear that has seen better days and will help you look like you’ve been surfing with it for years, and are really quite poor.

There are a number of, well, actually, just 2, directions you can walk along the cliffs and at low tide you can walk from one end of the beach to the other. And back! If you get lost just follow your tracks in the sand or slowly turn 180 degrees and aim for the opposite end to the one you are currently occupying.

Lying on the Beach in Very Little Clothing

Morocco is a Muslim country sooo that’s not really on around here.

Fishermen on the Cliffs

The very portrait of serenity as they sit stock still on the loose rocks and uneven outcroppings 50-75 metres above the ocean, their remarkably elongated fishing poles reaching far out over the abyss, patiently biding their time in anticipation of luring an unsuspecting fish into sudden bafflement and certain doom.

Although deep down he hopes nothing hits until you are gone because there is simply no way to look cool, or even competent, dragging 75 metres of line up the side of a cliff with an outraged fish flopping and bouncing off the rocks in angst-ridden desperation. 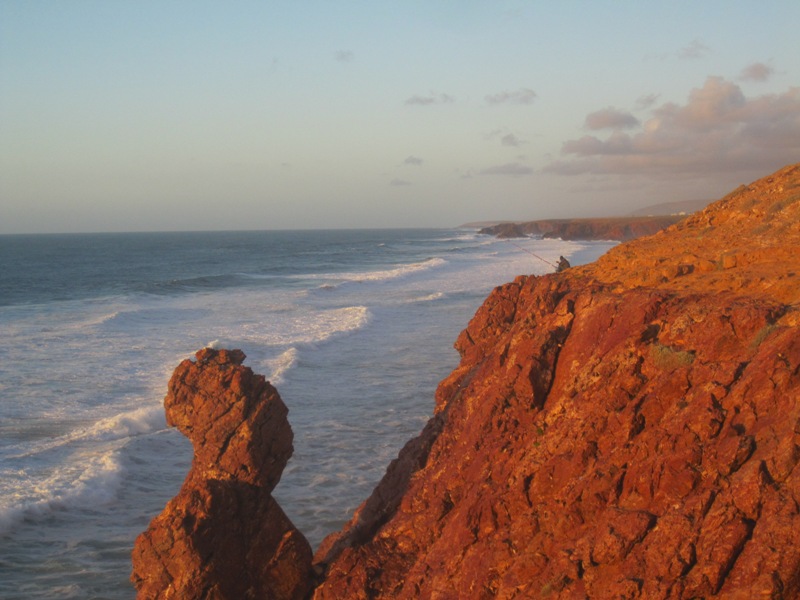 The views from the cliffs and terraces are stunning, especially at sunset, or whenever the neighbour’s pool guy accidentally lets his shorts sag too low in the back. But try to restrict your gazing to beaches, ocean and distant rocky shores as some of the urinating fishermen have a hard time going when you’re watching.

A comfortable, almost luxurious, house set right along the cliffs, it is hard to decide which is more outstanding – the terrace views or the breakfast. Although both are definitely preferable to entire mornings listening to 90’s techno and Kenny Rogers classics, or the unsettling presence of a well-worn saddle suggestively located just outside your bedroom door.

The large resident parrot is unique but can be off-putting, especially when it screams like a nudist running into trouble on an escalator. On the bright side, though, the dog is really skittish and easy to scare. Sally’s is a long walk to town if you don’t have a car, or a short walk to your car if you do. 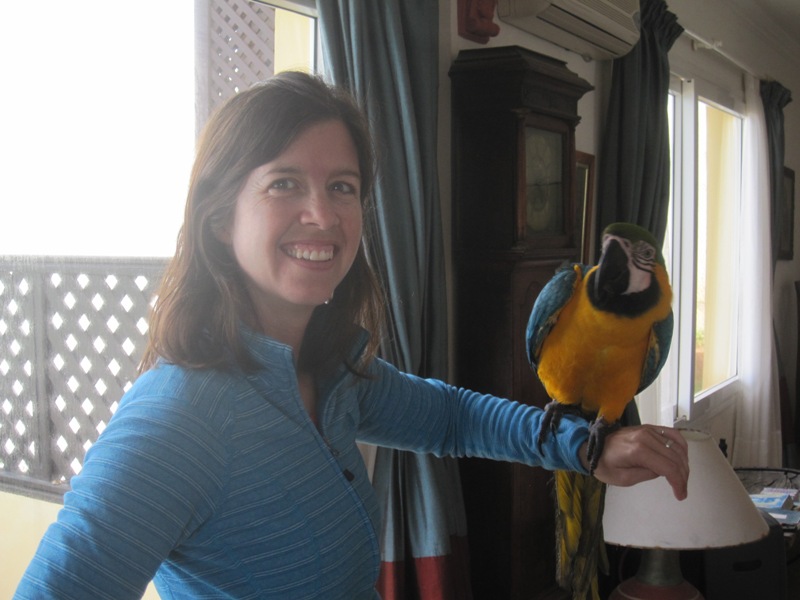 Parked at the very precipice of a stunning cliff looming high above a quiet stretch of beach. Fully equipped for the authentic hippy experience with ratty blankets to  lie on the ground, one unsteady lawn chair to take turns in, a sheesha pipe (token of several heady – and foggy – months spent in Turkey back in 2008), a pair of rambunctious and overly large dogs of indeterminate breed, a small propane stove used to boil water for coffee, mushroom tea and a variety of cheap and filling pasta dishes, a wide array of bandanas and other anti-capitalist hair-tying items, and a lingering odour of organic toothpaste and long overdue income tax forms. 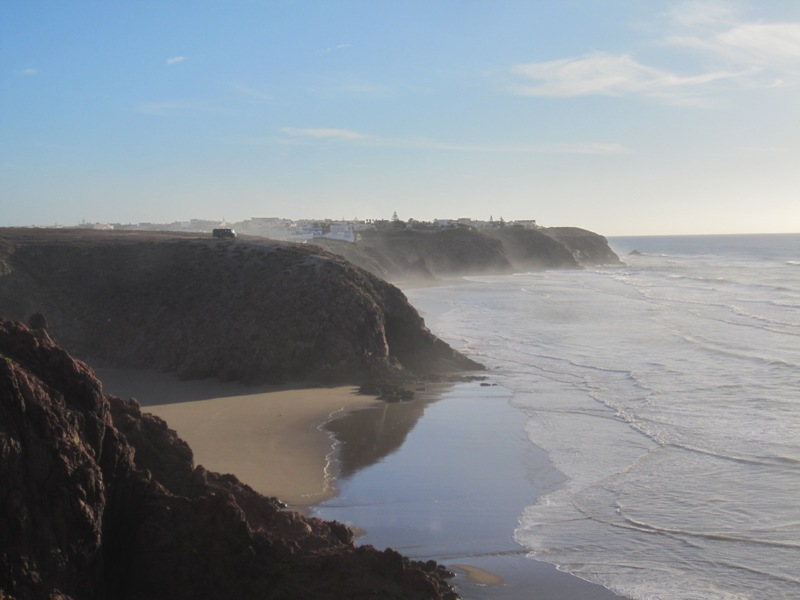 Good service, great food. The brochettes came with amazingly un-Moroccan roast potatoes. Being cooked with love is extra, though, and will earn you a wary look if you ask.

Recommended, especially if you are from the UK and are homesick for the comforting sound of very drunk old British men bickering over the tab.

Decent pizza, but they strangely choose to let their lasagna stand for 3 to 4 days after baking rather than the more commonly recommended 10 minutes.

Great place to stock your “cheap / great view” apartment. The bananas will be meticulously weighed each and every time but rest easy, it will somehow still always work out to 1 dirrham per banana.

Long, beautiful rocky beach leading to a pair of stupendous stone arches. Terrific photos ops, and just enough wind-swept desolation to trigger a satisfied feeling of having braved at least a partial element. 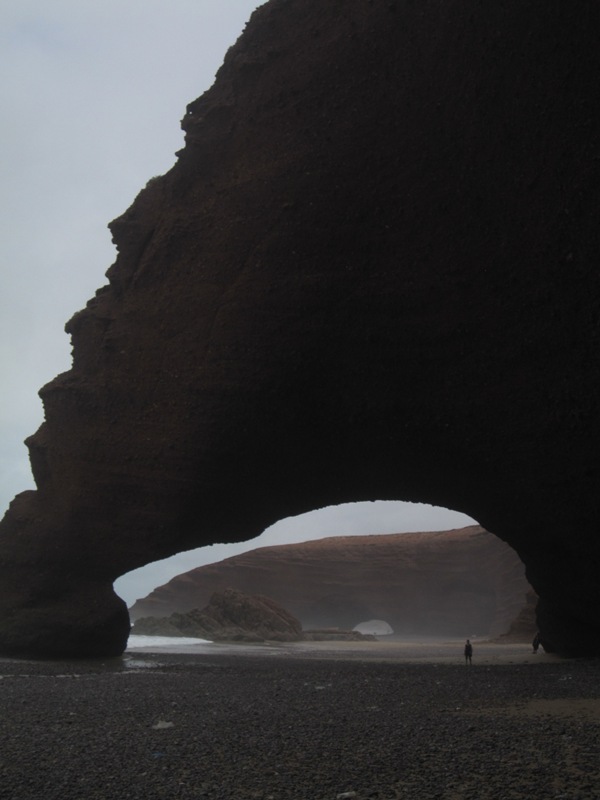 A somewhat sad, broken down place known mainly for attributes considered uninteresting to most people – off white buildings, a depressing history of Spanish colonization – but seemingly bereft of any real attractions or sense of vibrancy. Extremely popular with the campervan crowd, obviously.

0 thoughts on “The Lovely Janet Guide to Mirleft”