Question: How did your airplane buddy, Aune-Marie from Rwanda, respond when her husband asked about her flight?

Question: Does spending 7 hours in 40C heat in the Djibouti airport suck ass? 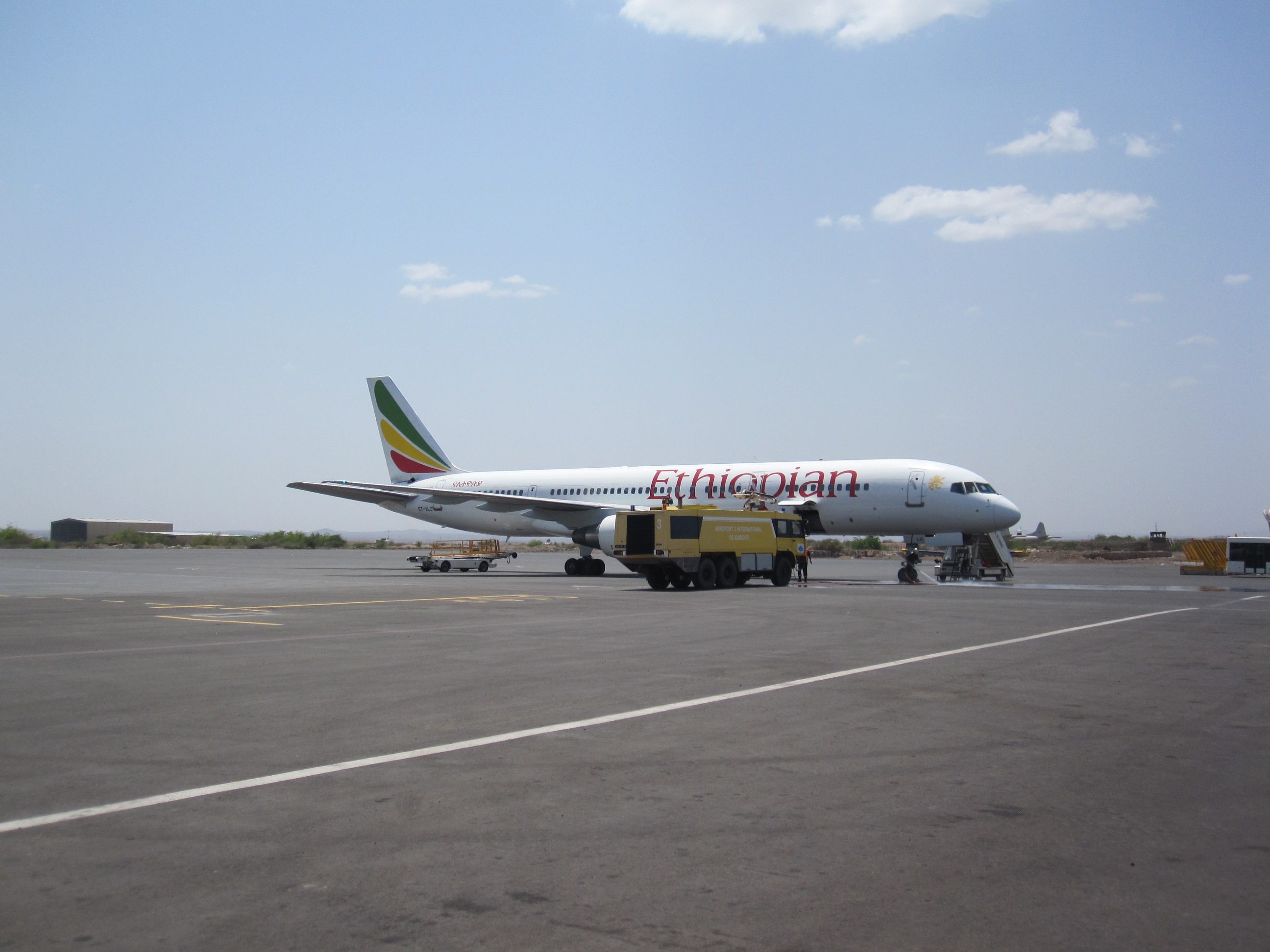 After coming oh-so-close to landing in Addis Ababa, Ethiopia, where we would then connect to our final destination of Kigali, Rwanda, we were, at the very last second, diverted away by apparent concerns about the weather. Diverted not to circle for a while, not to another Ethiopian airport nearby, not even to a jovial work camp led by a witty ne’er do well male lead and his implausibly strange and hilarious supporting cast, but in fact to a completely different country called Djibouti which is, allegedly, near the Red Sea, shares borders with both Somalia and the possibly fictitious Somaliland, and is more than likely hotter than the 8th and least favourite level of hell (i.e. Reno in July). After landing in so-called Djibouti a mechanical problem was “discovered” and we spent about 5 hours on the plane in “about 15 more minutes” increments. Eventually they ushered us all off the plane and across the blazing tarmac to the less than fittingly named departure “lounge” where Laynni and I made the best of a bad situation by charismatically persuading the woman behind the counter to sell us the old tuna sandwich spending its final days quietly stagnating on the back shelf. Bool-ya! Soon after that the sweaty guy in the dirty jumpsuit who had so meticulously collected all of our passports in a greasy plastic bag decided that now that he had them he really couldn’t think of what in the world he was going to do with them so encouraged us to crowd around and proceeded to hold them up one at a time to be reclaimed. After that bizarre 45 minutes of our lives had disappeared we got back to the serious business of waiting. A couple hours later we had finally finished our sandwich, burped uncomfortably, lined up on one side, visited the toilet twice, burped up a weird air bubble, scrambled to a new line on the other side, then retraced our steps to the original line (gaining several spots in line – thank you narrow, non-“African woman” hips) before we finally ran completely out of ideas when we were told to suddenly transform our 200 person jumble into one column of pairs starting about 20 feet backwards and a few simple steps to the side. May as well have ordered us to turn a piece of lasagna into a limp, yet orderly, spaghetti noodle. Or a pony.

Anyway, after being soundly harangued by a number of angry, heavily perspiring women our innovative leader in his fluorescent safety vest eventually gave in and just started sending us through for what was to be the first of two replacement flights. Luckily (we had no idea how lucky at the time) we just made it on the first flight and eventually ended up checked into our complimentary hotel in Addis Ababa by around 6pm (we had left for the airport in London about 24 hours earlier). We later learned that the rest of the passengers, those earmarked for the “second flight”, in fact ended up waiting until the plane we had been on returned all the way to Djibouti before they actually ended up back on the original plane which was now, apparently, good as new and arrived in Ethiopia sometime around midnight. Long story short – mangoes are no substitute for real, live breasts.

Now, as for Kigali, we did eventually show up here, even making a couple friends along the way, one of whom is married to Rwanda’s legal human rights representative to the UN. Which is how we found ourselves having our first meal in Rwanda with a Rwandan lawyer and his engineer friend in a Moroccan restaurant. Odd.

Some of our first observations in the real world of Kigali:

–         Lots of people dressed up on a daily basis – men in shirt and tie and women in very colourful dresses.

·         While people, the men especially, tend to be quite loud and animated when they talk, for the most part the people are very polite, much more so than most places that don’t have a giant freaky leaf on their flag (home of door-holding, the unnecessary “sorry” and line-up etiquette that’s complex rigidity is reminiscent of David Duchovny artistic turn in Red Shoe Diaries).

·         Food is interesting – lots of beef, rice, salads, mushrooms, and pretty good selection, although restaurant meals take for-frickin-ever. Unlike Latin America, however, they bring the bill right after they take your plates, which we like, having run out of things to talk about shortly after the great “it’s better to close the cupboard doors” debate of 2006.

·         Almost no taxis, mostly just “taxi-motors” which are essentially taxi motorbikes which only fit one person (inconvenient for us) and offend at least 17 of Laynni’s Health and Safety regulations (including high velocity in tight traffic and touching sweaty teenagers). On the bright side, they do provide helmets. The downside – those helmets are large and green. Unfortunately, we have no pictures because, to be honest, I really just would have felt like too much of a knob taking a picture of my wife on a “taxi-motor”.

·         I can’t speak for the whole of Rwanda but Kigali, at least, seems a bit rife with jet lag – they really need to work on a more gradual phasing of the sun and should think about arranging their time zone in a manner more pleasing to my REM cycle. In their defense, we didn’t contact them ahead of time to let them know we were coming. 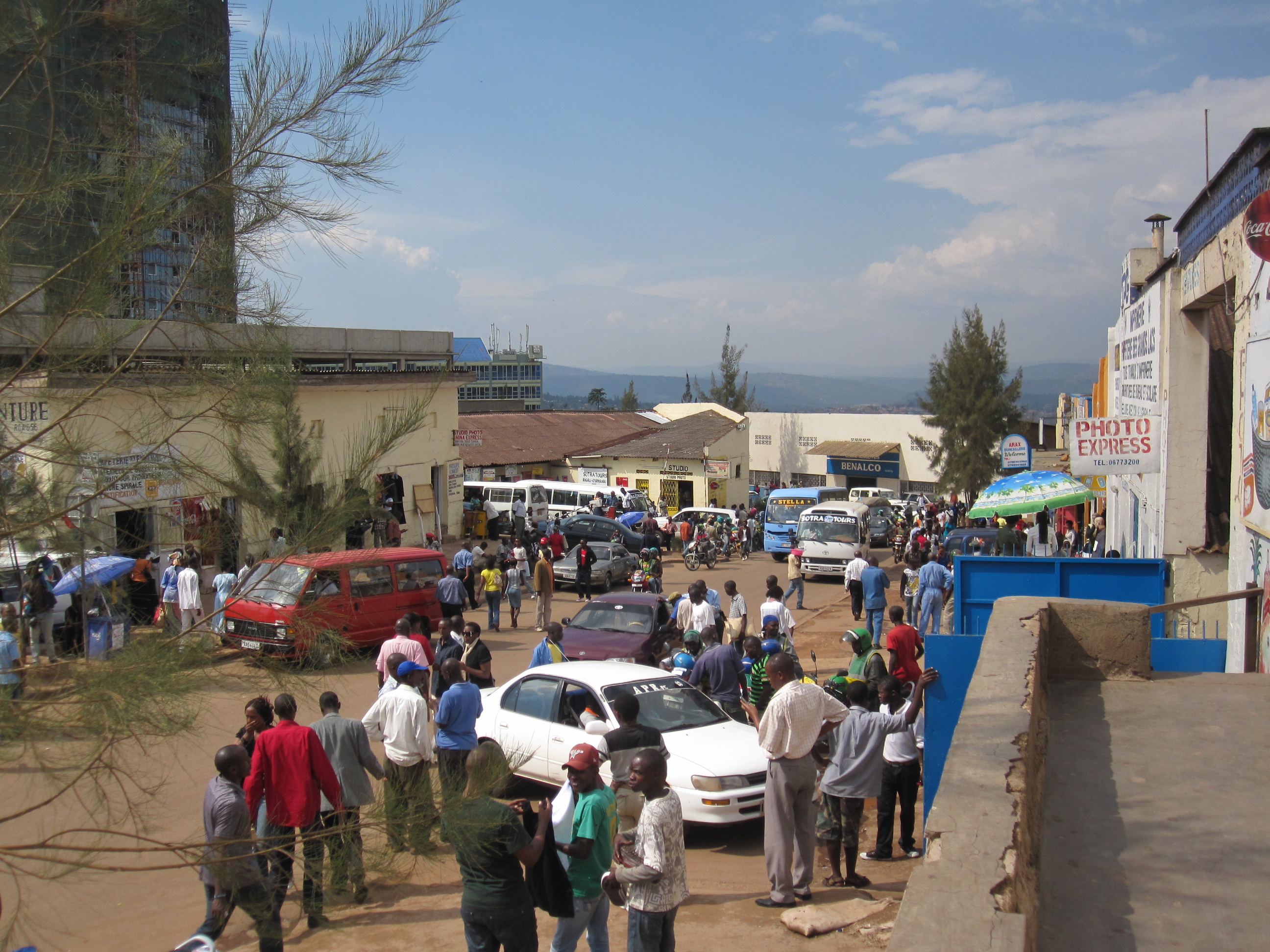 We spent nearly a whole day working on acquiring visas to visit the Democratic Republic of Congo (ever notice how any country with “Democratic” right in the name is usually anything but?) which, as usual, was a shit show extraordinaire. First you need to pay $20 each just for the form. Then you need 2 photos (check), that are identical (problem), 2 copies of your passport (check), 2 copies of the cover of your passport, the part that looks exactly the same for each of the 35 million residents of Canada (no, that one hadn’t crossed our mind), 2 copies of our yellow fever vaccination certificates (check), 2 copies of our bank cards to prove we have money (Is that proof? Really?), a pen (whoops) and, finally, the ability to speak French (Fromage! Fromage!). Of course, there is no photocopier there (3 km from downtown), or nearby, so in an effort to save two more taxi-motor trips we went across the street to the Canadian Embassy where we were diligently checked out, subsequently laughed at, and eventually provided with photocopying services. I’m pretty sure that menial office tasks are right up there on the Embassy’s hit list of International Emergency Services, along with washing Canadian underwear and sorting out problems caused by unwise texts exchanged with your teenage babysitter. It was our first ever visit to one of our embassies abroad, we wanted to start small. Then, a couple hours later, just when we thought we had the whole thing aced, everything started swaying off the rails again because we didn’t have a phone number where she could reach us. Aghast and staring at us like we had just complimented the girth of her tongue, I quote: “I can’t give this to them with no phone. They are going to ask me ‘How can you live with no number?’” Our offer of an email address was received with the enthusiasm normally reserved for day-old soup skin. 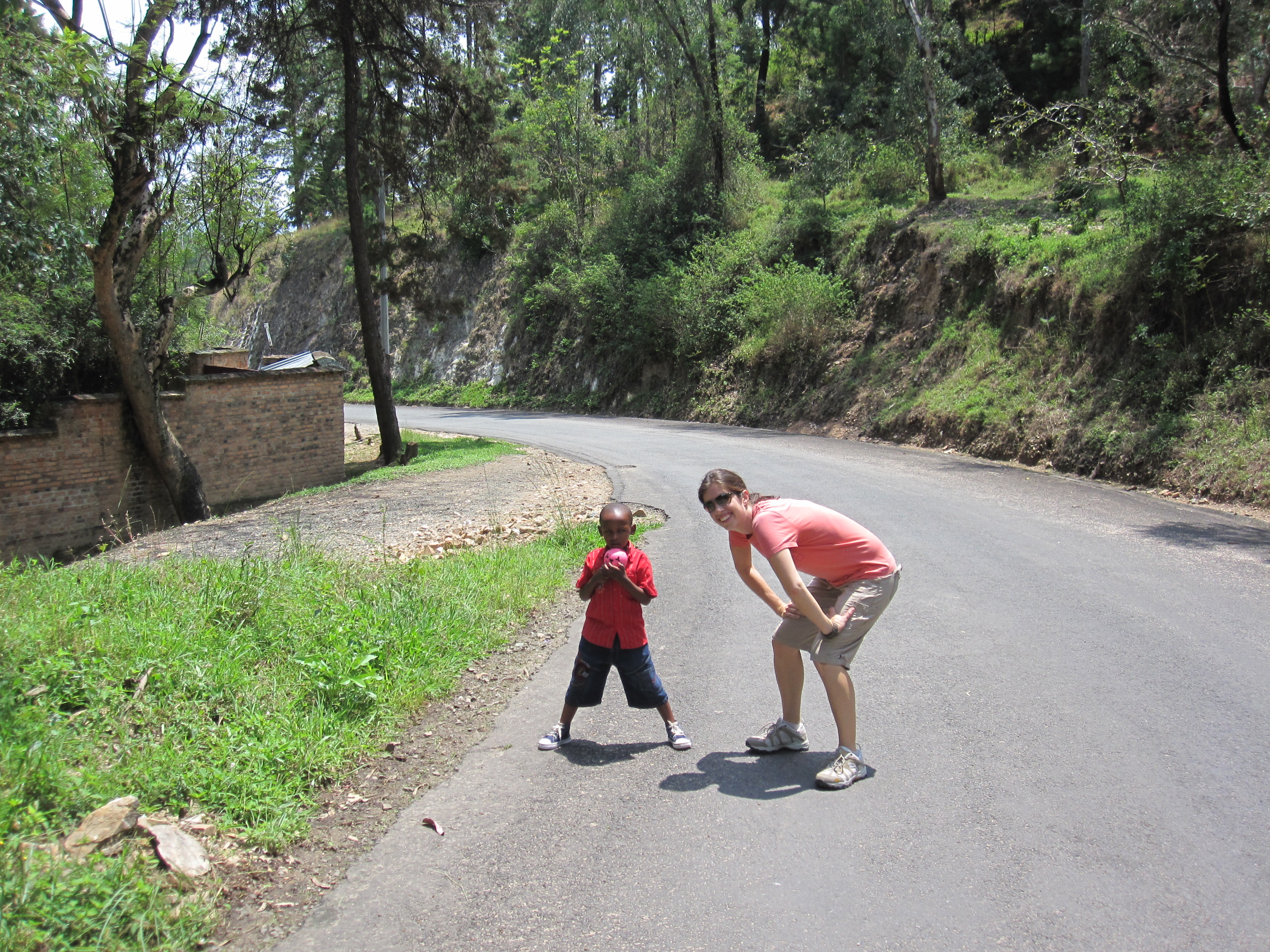 Which brings us to Kibuye, on Lake Kivu. A beautiful little town (we think it’s little but it’s tough to tell as it’s spread out further than Charlie Sheen’s DNA) that meanders over a number of little peninsulas jutting out into the lake. We got a great hotel room (for the same price as our dingy, it’s-ok-er in Kigali) with a patio, great views of the lake and reasonably passable wi-fi. While out walking this morning we passed a family of apparently well-to-do Rwandans and, while the two women looked on, the two little kids ran over and hugged us around the shins, each in turn. We’ve had plenty of attention from kids in our day (Hello, mister! Baksheesh? Pen? Bon bon? Good mora-ning! Etc.) but this was definitely a first. Especially for me, since the only kid-hugging I’ve ever done has been with Tahnni’s family at Laynni’s behest. So now I guess I have to figure out what I’m going to get them for Christmas.

Overall, as soon as you leave the city the scenery immediately takes your breath away. “The Land of a Thousand Hills” is definitely an understatement as I don’t think there’s a flat spot in the entire country. Yet every single hill, no matter how steep, remote or goat-riddled is still dotted with huts that almost blend into the hillside and are surrounded by tiny farming plots. In a country this small no land goes to waste. Consider this: Saskatchewan has about 1 million people, Rwanda has about 11 million. Yet Saskatchewan is roughly 22 times (!!) the size. And this incredible density is even more unbelievable when you consider that their largest city is less than a million people, which means most of those 11 million are perched on hillsides in rural areas. 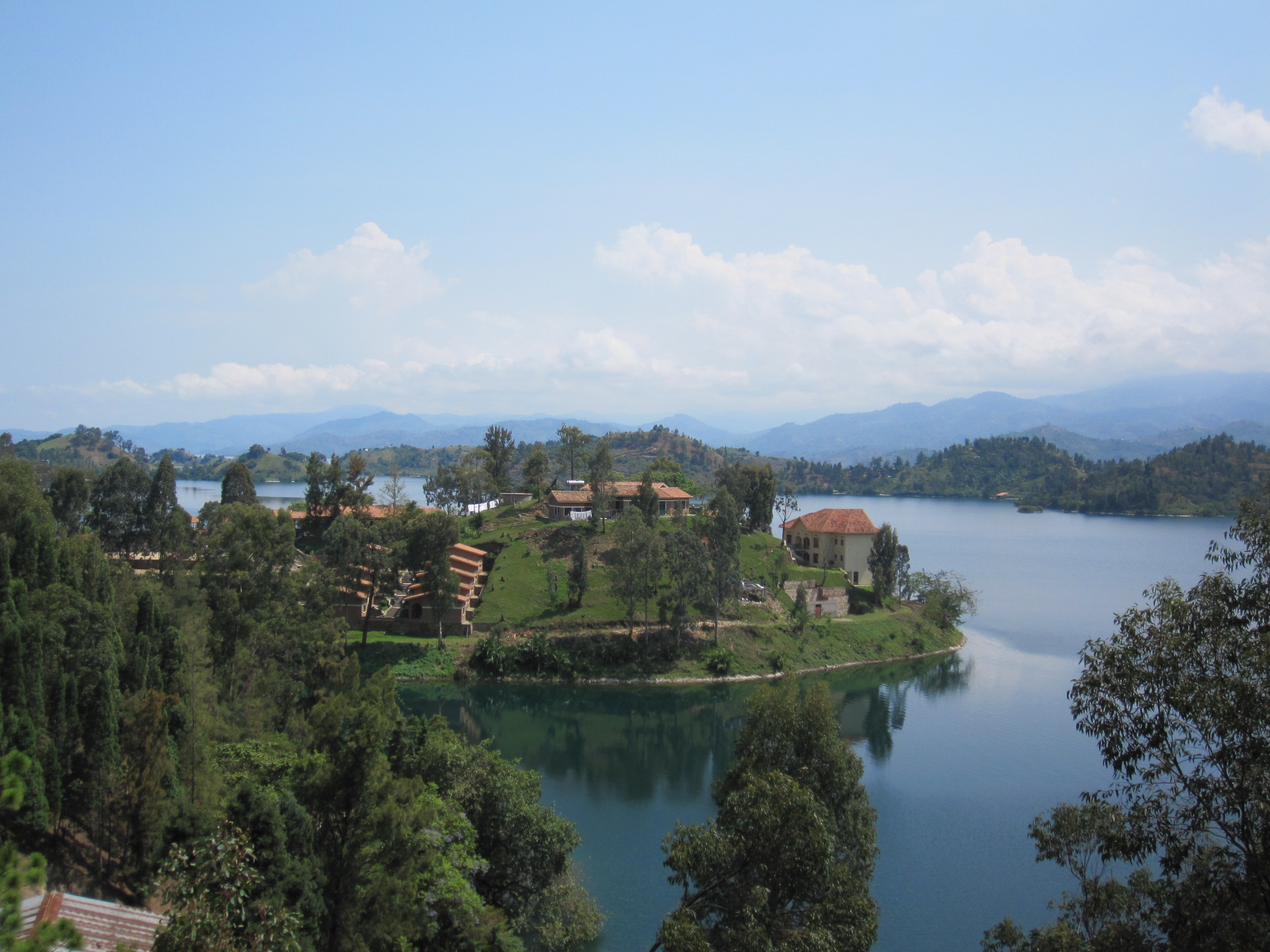 Anyway, we are now in Musanze – the staging point for Mountain Gorilla treks – but since we did not book a permit early enough we will soon be moving on to the Congo to do our gorilla trek, and then climb a volcano, of course. Laynni’s still trying to figure out how and when I conned her into that one and is currently looking forward to a night in a tent on the crater rim at 3,200 metres with about as much excitement as the 2nd Tuesday of every month when it’s her turn to memorize a new role-playing safe word. Probably won’t post another update until after that. The volcano, I mean, not Laynni spending hours chanting “larvae, larvae”. 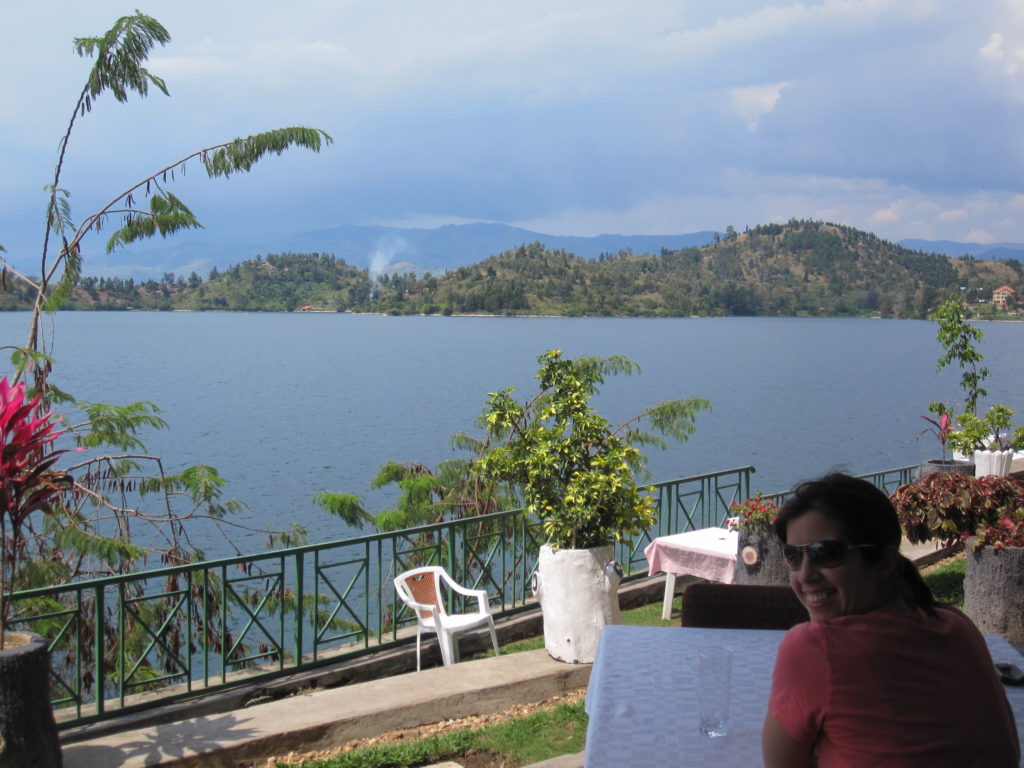 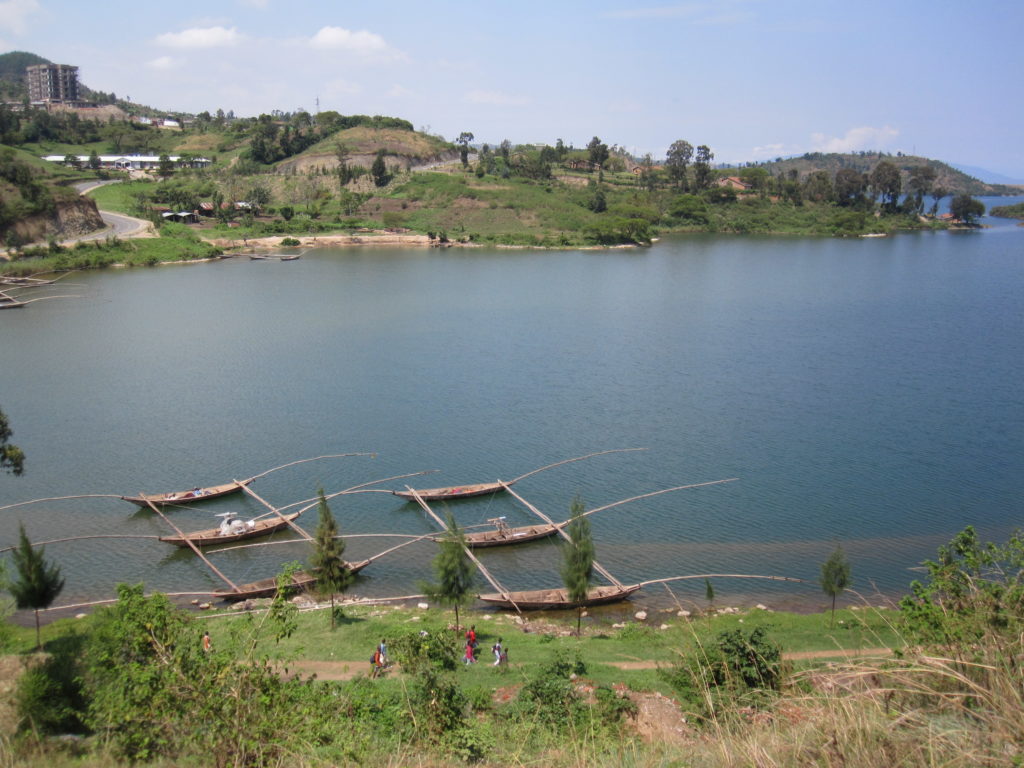 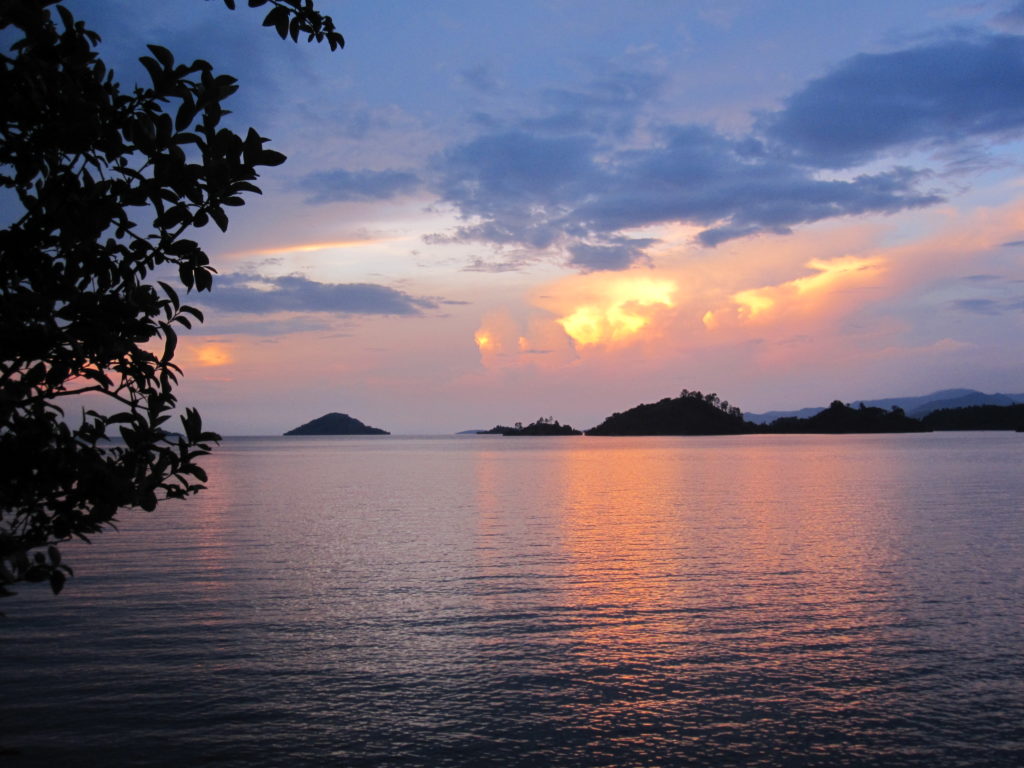 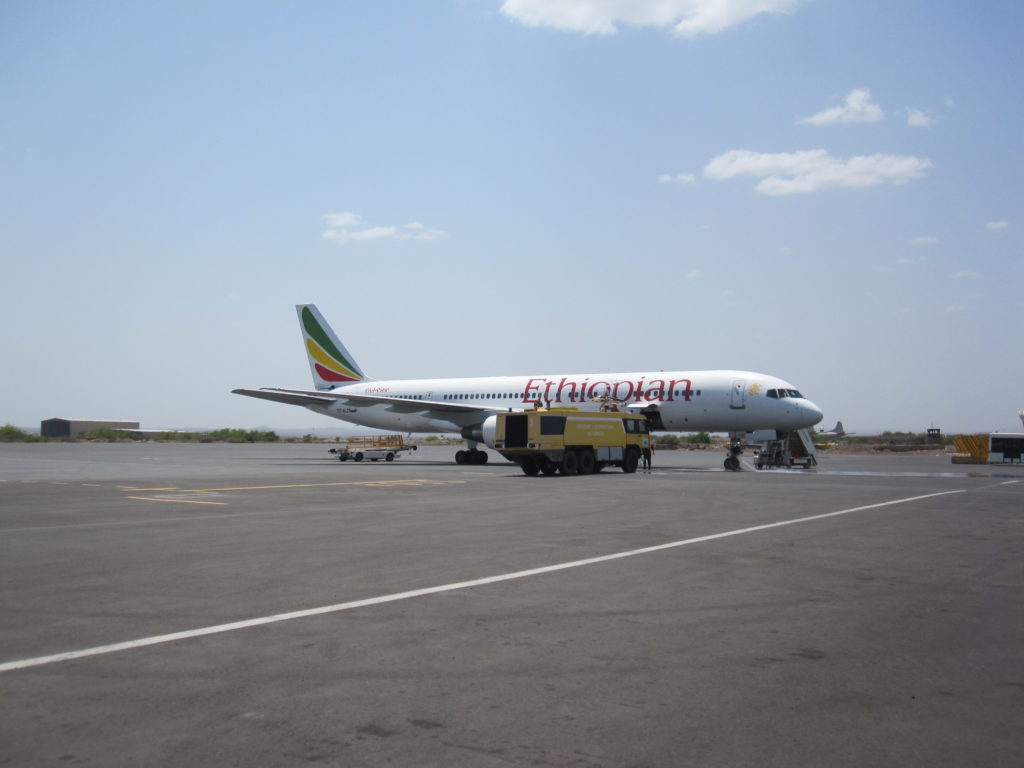 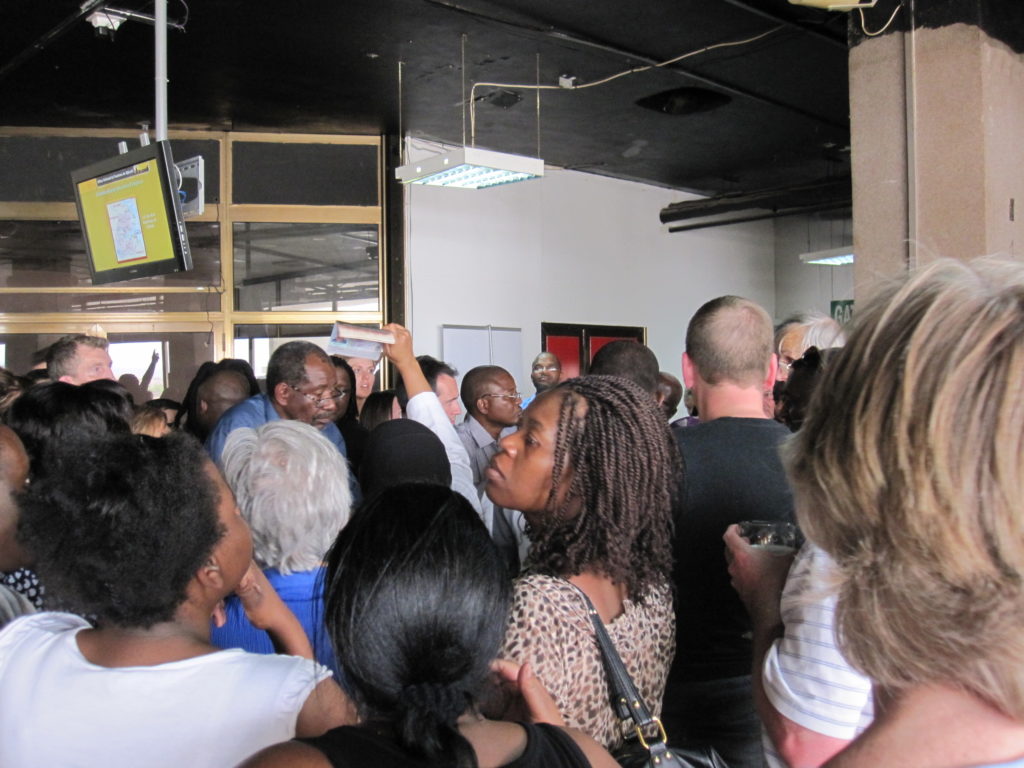 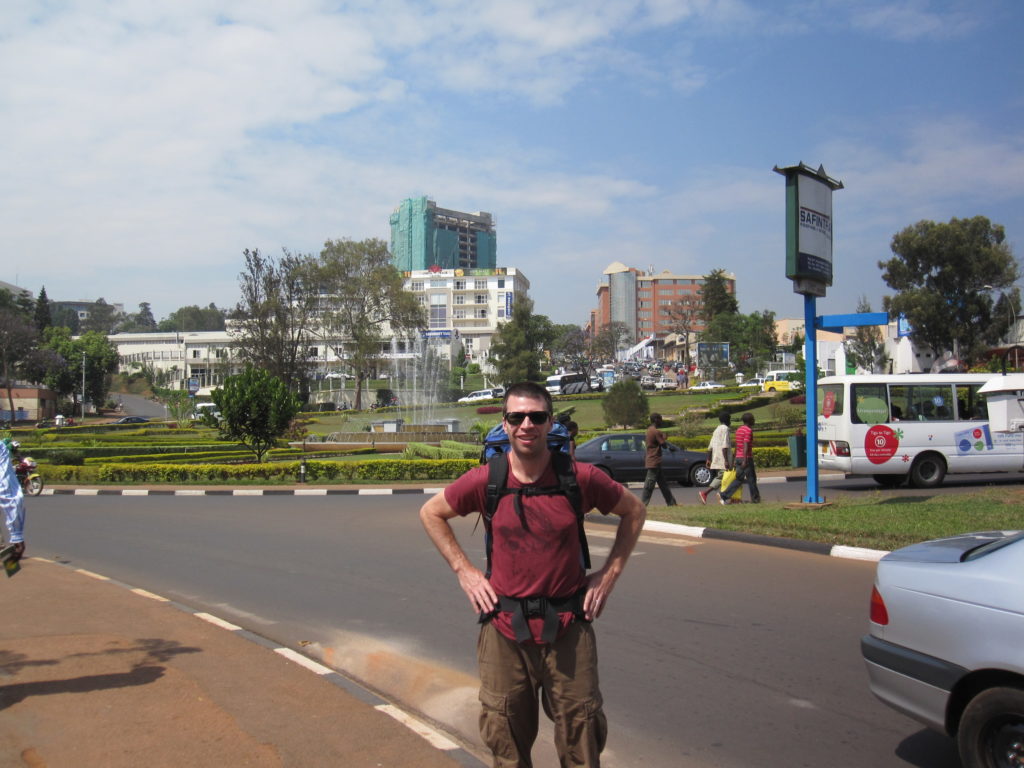 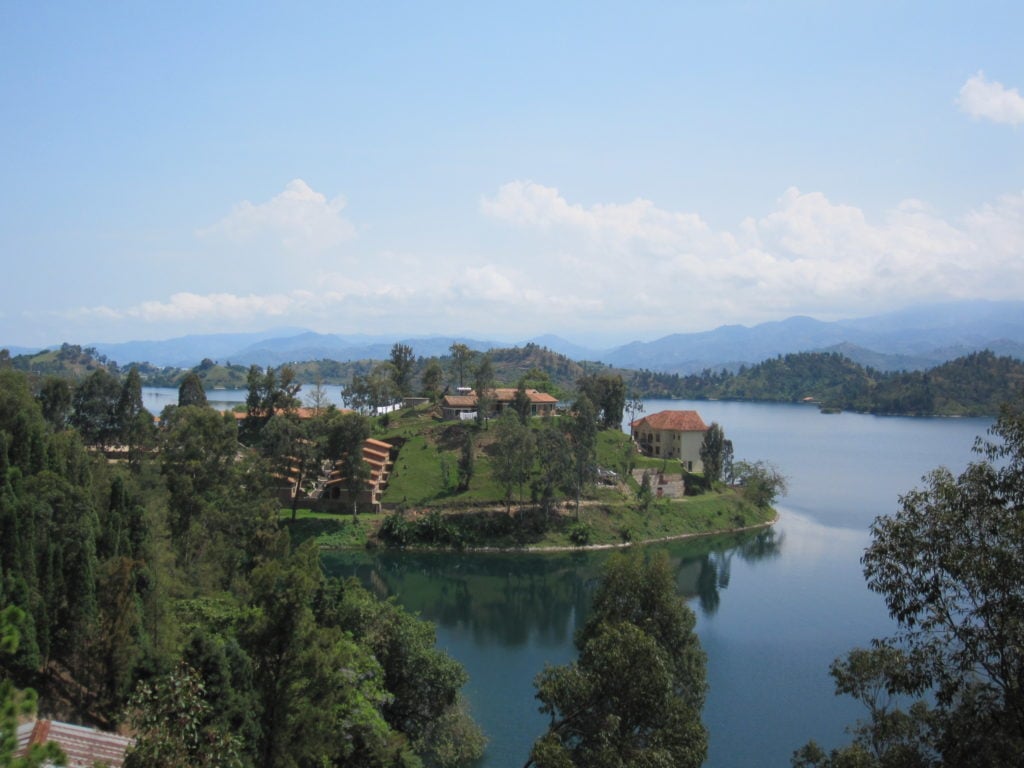 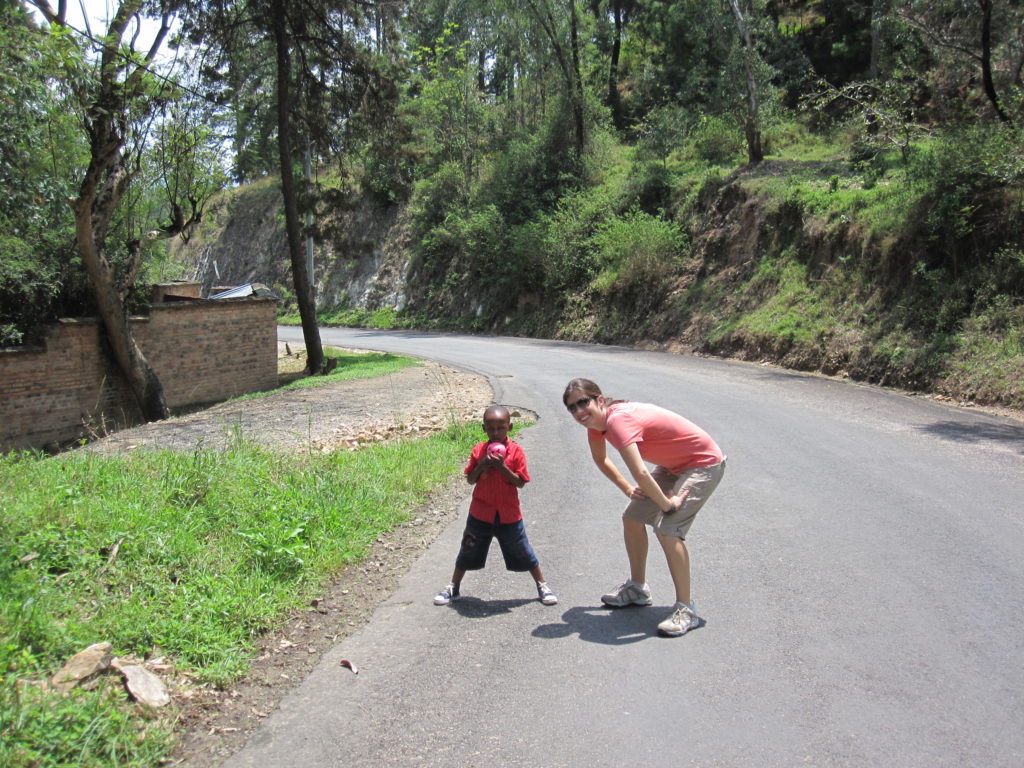 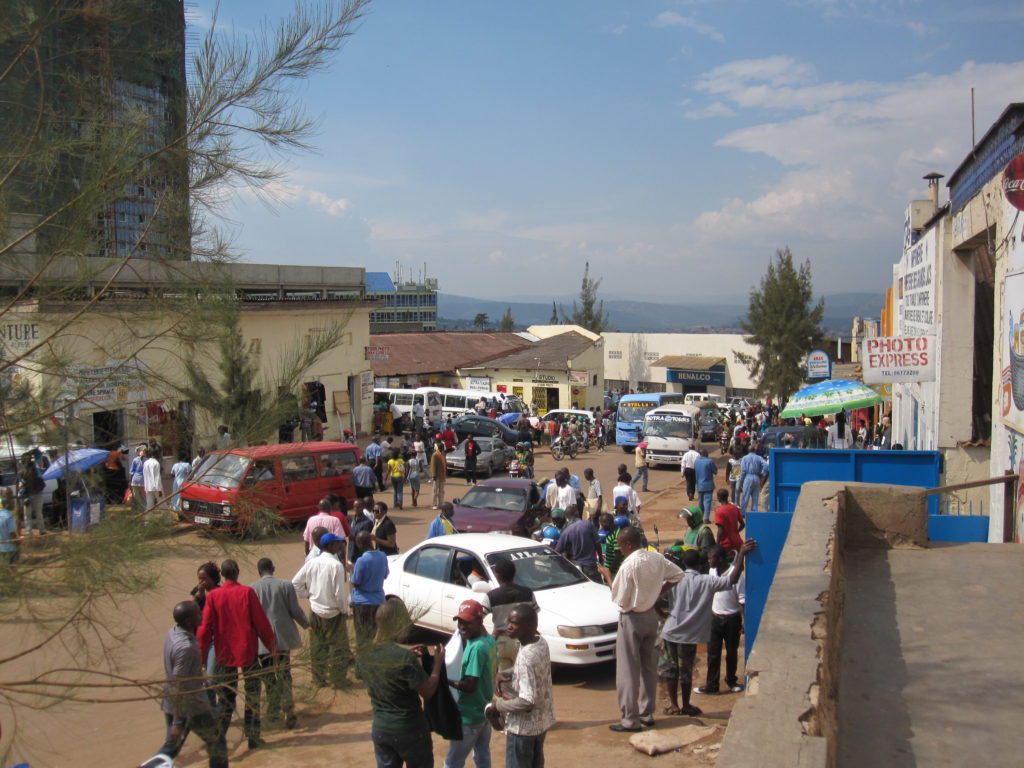