Laynni’s parents, Lyle and Nadine, who you may remember from such prior adventures as Getting Pruned in the Galapagos Islands, Ring Shopping in Turkey, and The Hunt for Decent Coffee in Guatemala, arrived here in Bali last week. They have joined us in our villa (the previously discussed “Grouse House”), one of many great villas with a pool in the Ubud area, and seem to have taken to the area as much, or more, than we have, intermittent rain storms and lack of gluten-free options aside, and will be with us throughout our last couple weeks in Ubud, Bali, then the first week or so in New Zealand before they will branch off for some Australian road-trippin on their own. So, while their arrival could theoretically be considered a significant change for us, in reality the only real differences have been increased jockeying for lounging areas, longer discussions about where to eat, and constant confusion over whose towels are whose.

Regardless, we are all down to our last few days here in Penestanan, nee Ubud. Our last few days with multiple bathrooms, rice field views, a pool seemingly designed specifically to tackle troublesome post-walk sweatiness and, of course, the last few days with our very own moat. Speaking of which, those fish are certainly going to miss us. Considering the amount of both time and stale bread Lyle and Nadine spend on the fish daily, I wouldn’t be at all surprised if they left here with a hand-made card signed by the entire school, and maybe a few dozen new Facebook friends.

Along those lines, one of the things I think we’ll miss the most once we leave will be the lack of fascinating wildlife. Sure, there are no kangaroos making a nuisance of themselves, or any curious bears eager to demonstrate how not picky they are when it comes to eating but, on the other hand, we have seen our largest gecko of all-time, and by a considerable margin. There are cats that would walk the other way if they came across this guy, not to mention almost every person I know. As long as a loaf of bread if he was an inch, with the body of a burrito and the distinctive spotted pattern of a California measles victim, and he was even roaming around in the middle of the day, showing he didn’t get to where he is today simply by sitting around taking the easy pickings under a porch lamp.

We have also discovered that rice fields are quite popular with rats, although to the best of our knowledge none have yet managed to infiltrate our living space. Chalk up one more for the moat, we’re thinking, although it might also have something to do with the huge metre-long, bow-legged, and disturbingly quick monitor lizard we witnessed patrolling the rim of our pool one morning (too quick for photo-taking unfortunately), and chasing a terrified rat off into the relative safety of the rice remains. Comforting to know we were both on the same side in the rat debate, but somewhat unsettling because, well, he is a giant lizard roaming around our pool. Giant frogs are the norm rather than the exception, small scurrying lizards are everywhere, the bats can hardly wait to burst from their daily hideouts for their frantic nightly bug offensives, and surely I’ve expended enough energy and photos on ducks to sufficiently portray how many of those we happen to see every few minutes or so. Trust me when I say you can’t even take a circumspect piss into a muddy field around here without splashing an indignant duck in the beak.

Weather-wise it has been an interesting time to be here, with rain a possibility at just about any time, yet with most days still having several hours of sunshine. Generally it alternates between two patterns: super-hot, or kinda-hot and raining. Since I have learned over time that internet weather sites never agree with each other, and can only be trusted a completely unpredictable 20% of the time, I can’t be too specific other than to say I am sure I could never sweat this much if it was under 30, and there have been exactly two times this month when I felt a pair of socks might not be a terrible idea, making me suspect something in the 24-25 range. In case you were wondering.

One night we hired a driver to take us to the nearby town of Gianyar to check out their famous night market. Consisting mainly of two long rows of stalls selling roasted meat, deep-fried sweets, knock-off clothing and cheap watches, it was sort of like a low-key Exhibition/Fair/Carnival/Fiesta depending on your party location of choice. As a group we indulged in the local delicacy Babi Guling – also known as suckling pig. Obviously, each person only gets a small portion of the pig, and based on the stall we chose, apparently only the jiggly fat portion, along with a swatch of leather-like skin which I chewed vigorously for a while before admitting defeat and gingerly returning it to its place of honour on the far edge of my plate. Plus, they threw in some sort blood sausage, also with skin strong enough to patch a tire, and some rice, a spicy vegetable ball and a mysterious chunk of green meat on a stick that turned out to be the best of the bunch (I suspect it was simply chicken marinated in green chili sauce). We topped it off with a mixed selection of deep fried treats, and one sad old doughnut.

Maybe what I’ll miss most, though, considering how quickly, frequently and thoroughly I sweat through both t-shirts and underwear here, is the close proximity and thrilling convenience of the local laundry that I’ve already raved about previously. Drop your clothes off, quick inventory, pick them up the next day – clean, dry and folded. Hand over $2. Walk away smiling. Start sweating like a highway worker moving their sign from one place to another. Repeat. Every now then, though, if you’re lucky, and time it just right, you just might find yourself dropping off clothes at exactly the same time as a shy Asian girl, apparently returning from a pleasant afternoon by the pool, patiently waiting as she empties her beach bag onto the floor – towel, socks, assorted bikini pieces, two bottles of sunscreen, then an alarmingly lengthy strip of condoms unfurling atop the pile. Unfortunately I couldn’t tell from her blushes just how many she left home with that morning…

In other news, it seems that, sadly, mango season is already ending. Which is how the local shopkeeper explained the sharp increase in price the other day, before offering us the meagre consolation that white mangos were, however, finally coming into their own. So we tried a few. They aren’t as good. Not by half. They are white, though, I’ll give them that.

Finally, while wandering among the fields the other morning we came across a telling example of just how prominent the villa building boom has become in these parts, with beautiful new houses full of quaint views and ample outdoor living spaces making their way inexorably into the fields on all sides of town. If we had any lingering doubts about the ongoing level of demand for rice field property, this sign, and its adorably valiant effort at English, pretty much tells the story: 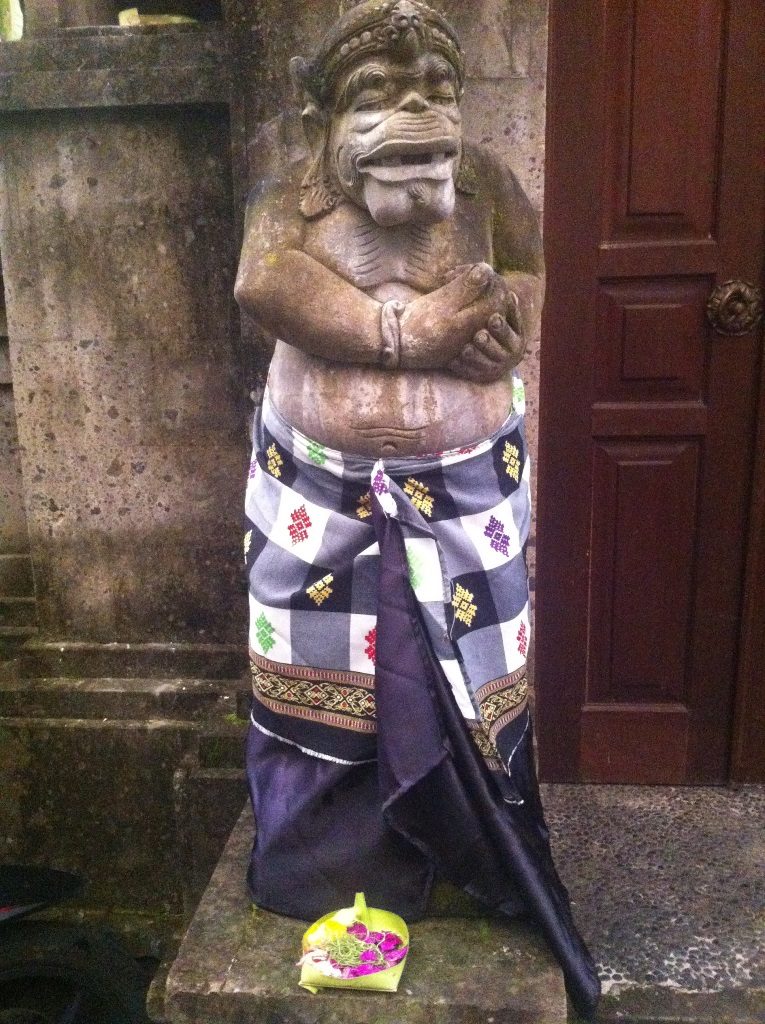 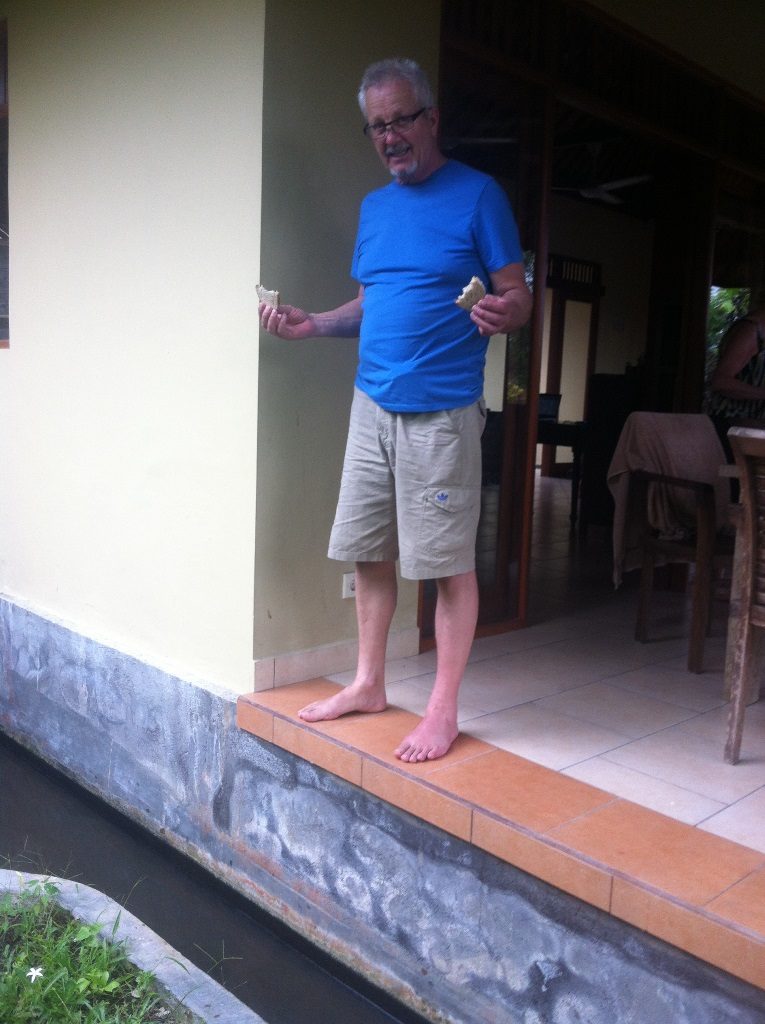 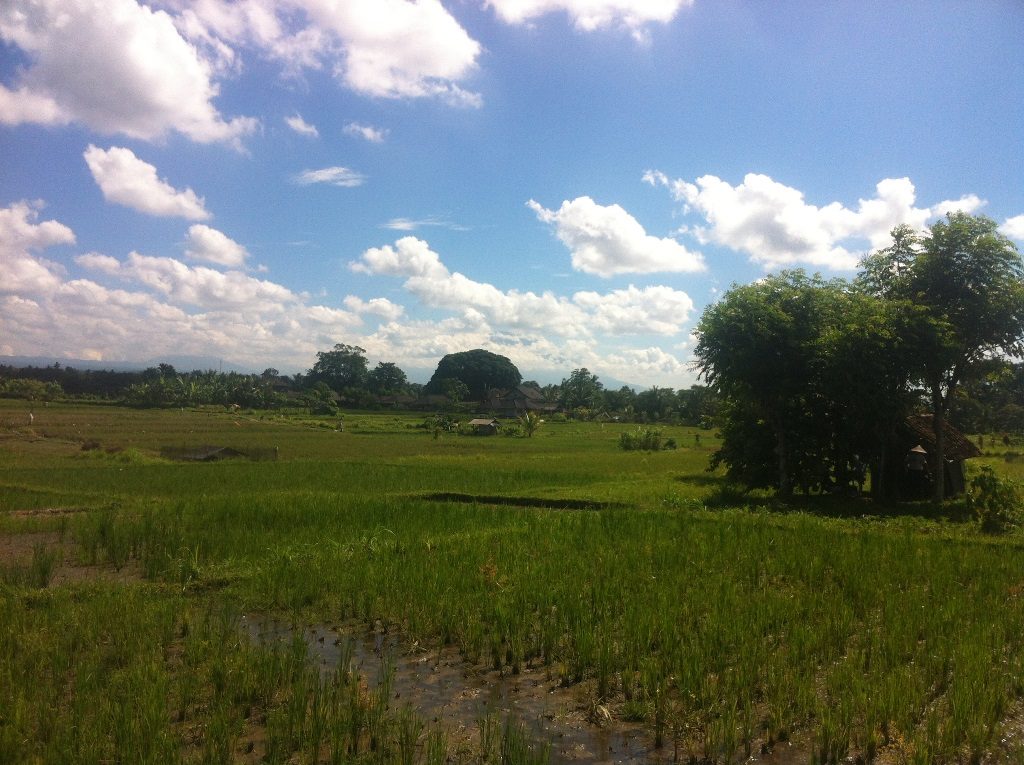 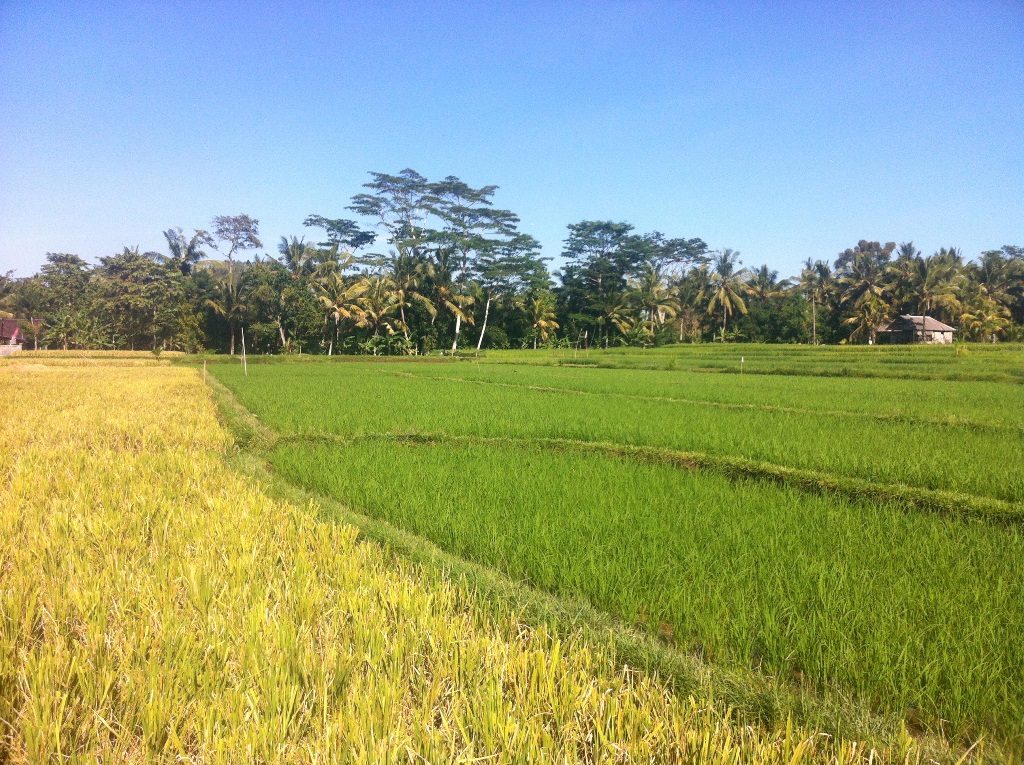 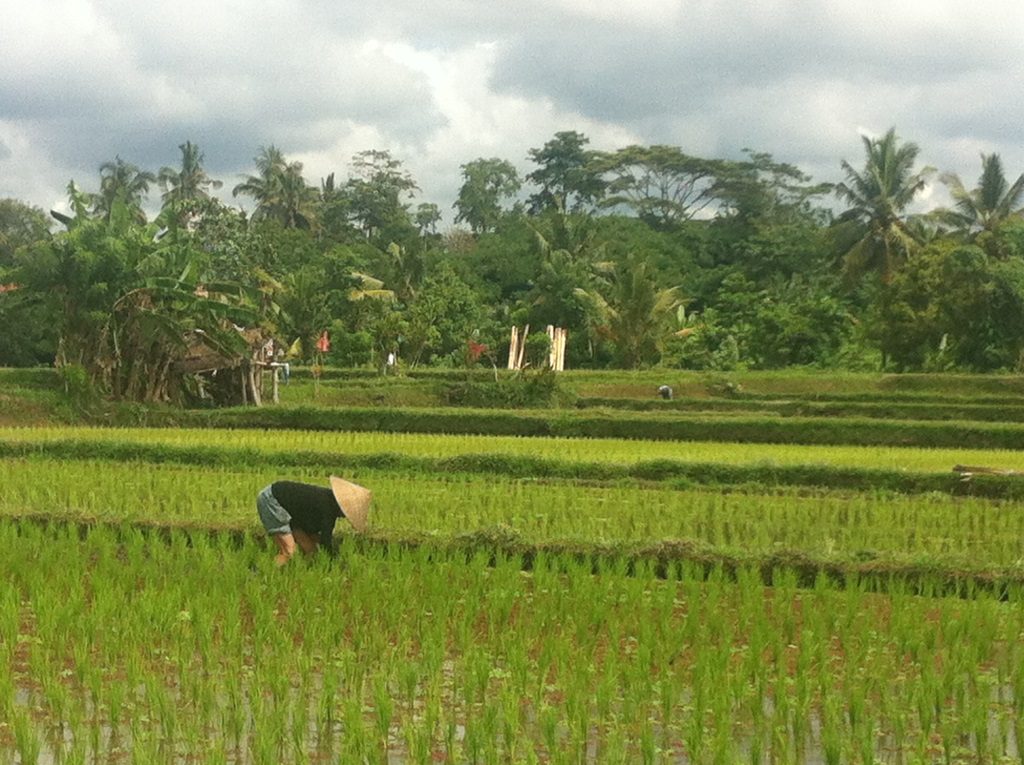 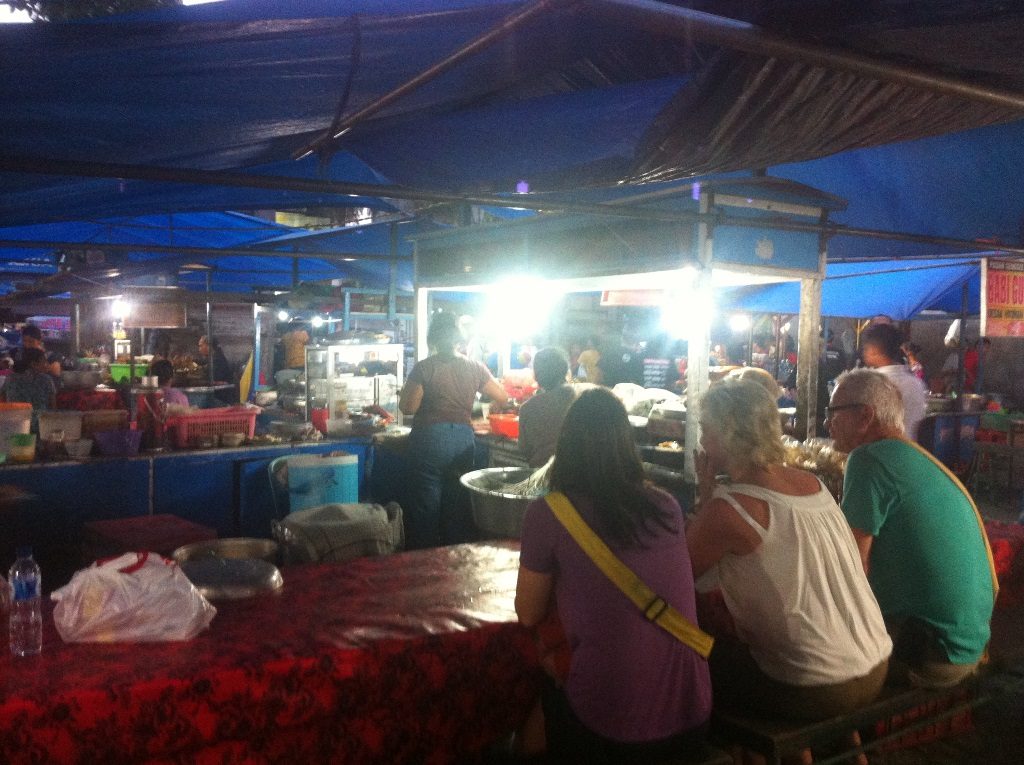 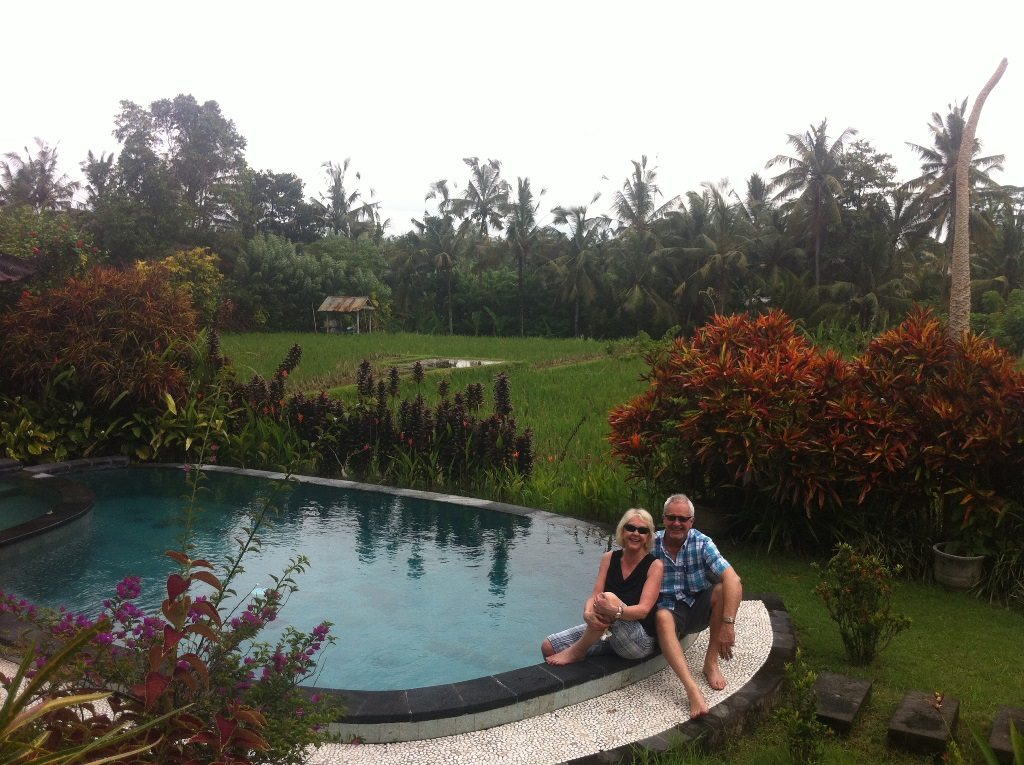 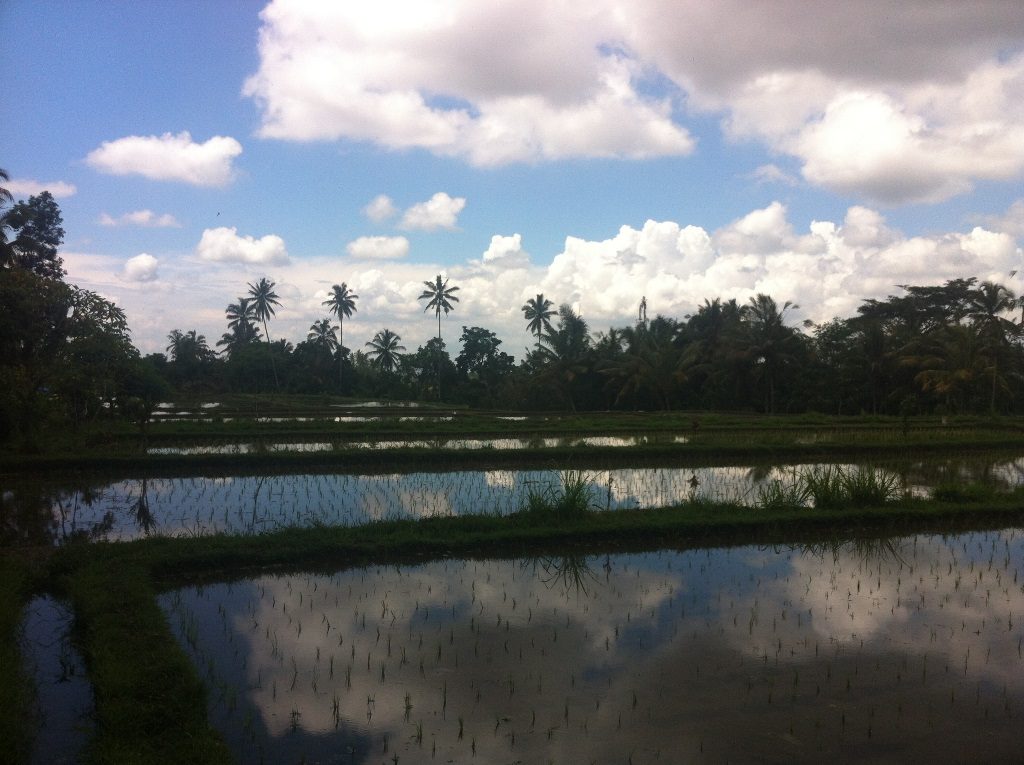 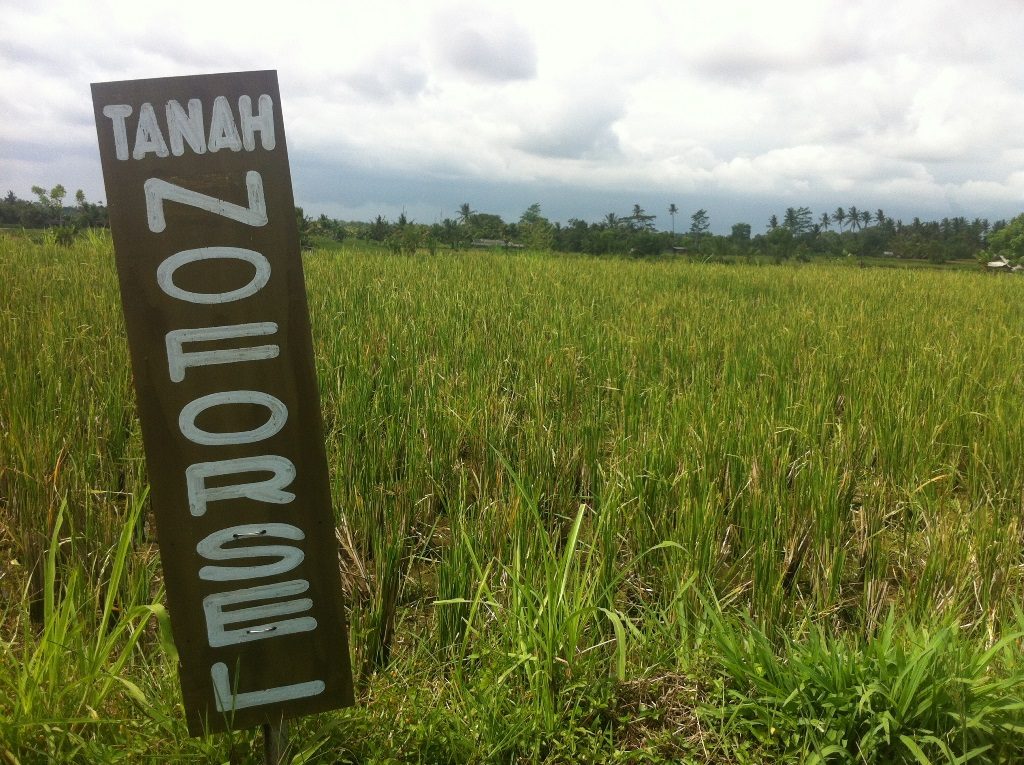 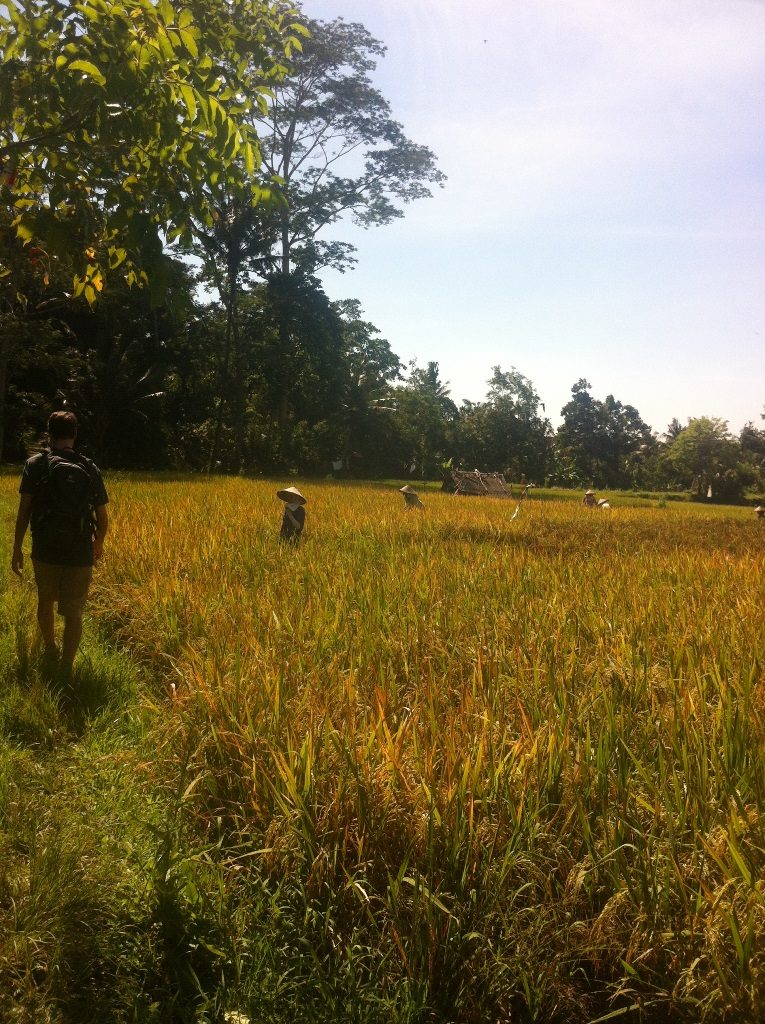 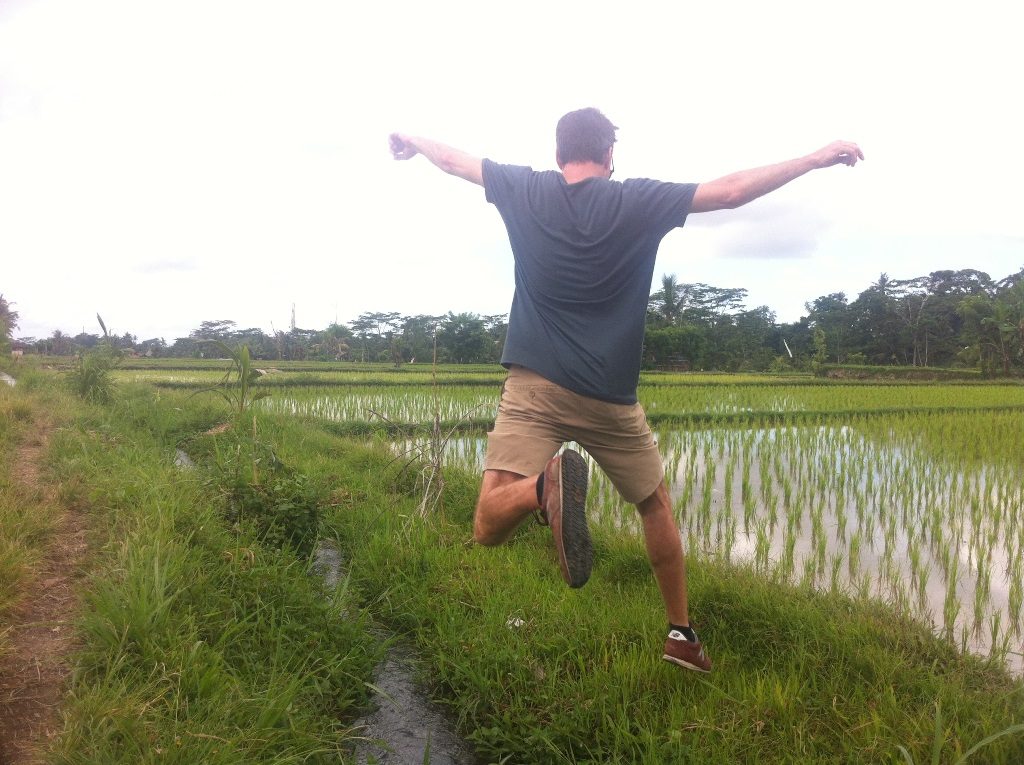 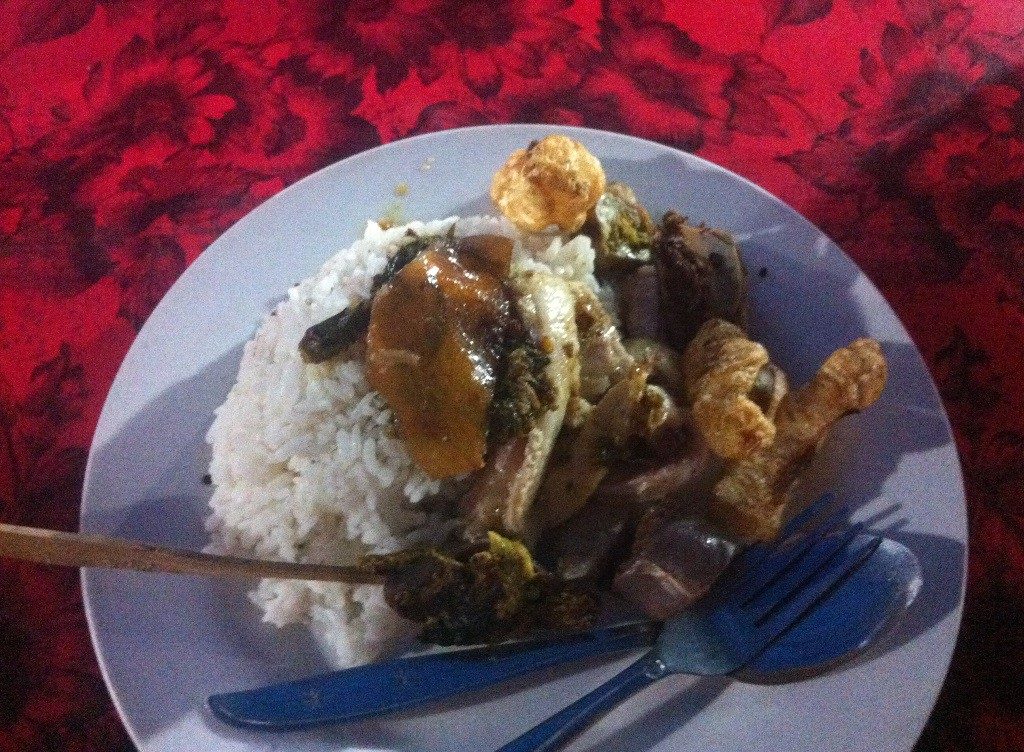 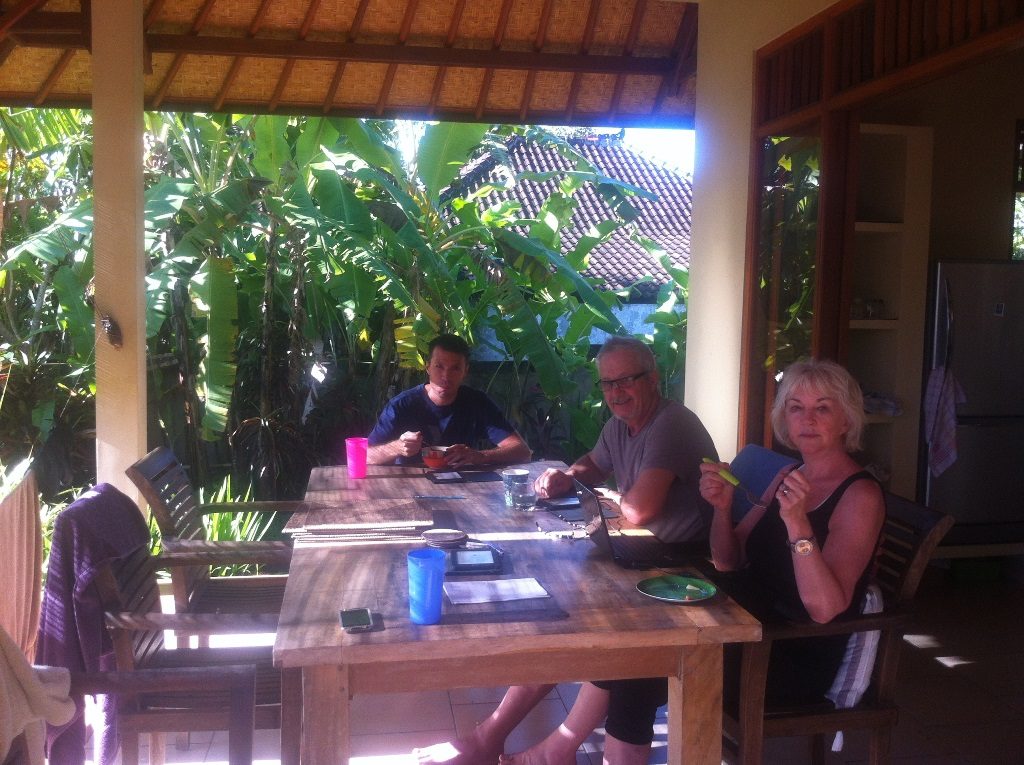 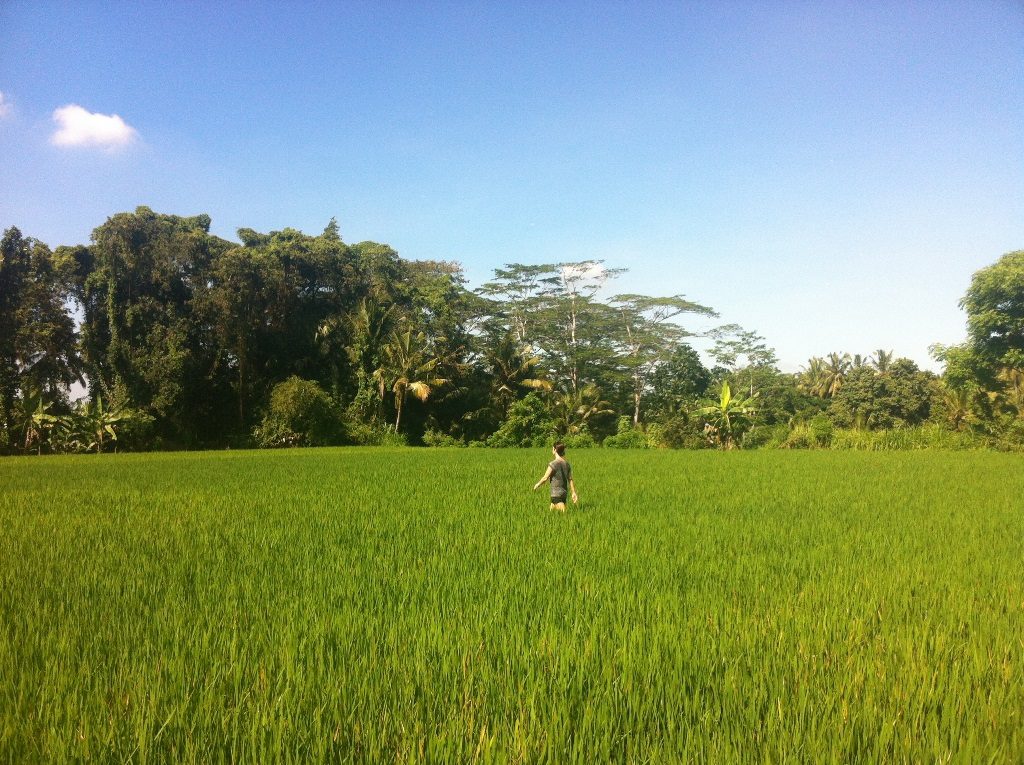 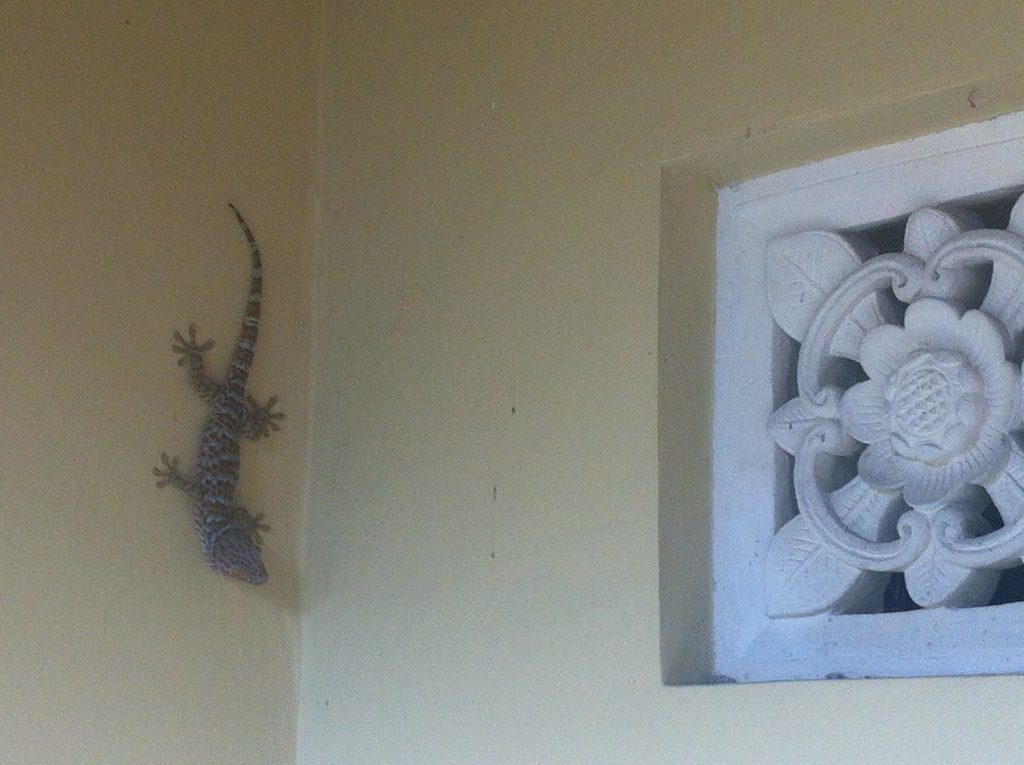