After our long spell in Penestanan near Ubud the time finally came to start moving around again. Spending a month in Bali without a glimpse of the beach seems like it should almost be impossible, never mind wholly unnecessary. So, after a last few days enjoying our rice field villa we finally uprooted and moved the whole clan plus a large bag of all our unfinished groceries off to the small, dry peninsula of Uluwatu that juts spectacularly out of the southwestern corner of Bali, another must-see addition to any great Bali itinerary

Uluwatu is one of the most Instagrammable places in Bali so we were looking forward to staying in another 2 bedroom house with great views and a heavy emphasis on outdoor living, except in this case the spectacular views were from halfway up a steep cliff overlooking the ocean, the rugged surf and the fascinating rock formations scattered along the beach in both directions. And the outdoor living was a tad hotter, slightly tempered by the ocean breezes, though not at all by the tiny tattered sun umbrellas (which may actually have a religious significance – which would explain a lot).

Picture the ultimate cool surfer flophouse, with two large balconies and everything spectacularly open to elements – including all the comfy couches, loungers and hammock. The upstairs was rustically beautiful – all wood with beds scattered everywhere as though in preparation for large numbers of exhausted surfers to eventually crash after a long day of surfing, drinking, smoking and flinging damp salty hair out of their eyes with a carefully practiced motion.

Of course, if you had any interest in sleeping in your own room, say, for example, if you were for some reason travelling with your wife and her parents, then you might instead subject yourself to the second “bedroom” downstairs, where the futon mattress generously and immediately gave in to allow your shoulder to join forces with the hard plywood beneath, the intermittent nightly rain only dripped onto one side of your pillow and the odd-smelling pink mosquito curtains gregariously made way for any and all hungry insects.

What to do in Uluwatu

Petulu, a small village near Ubud is famous for the massive colonies of white herons that return their to roost every night once they are done pillaging the rice fields of insects, nutrients and any coins that fall out of the farmer’s pockets. Apparently they just started showing up one day 50 years ago (Happy Creepy Bird Sanctuary Anniversary, Petulu!), crowding into every available branch on every tree in town, resting, murmuring in a bird-like fashion, and leaving distasteful white reminders of their digestive success on every flat surface and providing the town with a vaguely pungent reminder of why nobody takes on 20,000 birds as pets.

It was pretty interesting watching them return from their long day of grazing (?) to jockey for position for the night, while the youngsters (already the same size as their parents) aggressively and frantically badgered their mothers for food, which eventually she would provide via some extremely aggressive and painful-looking delving of their throats with their long sharp beaks.

In a somewhat counterintuitively fortunate circumstance it started drizzling a little bit right after we got there, which gave us a good excuse to use our umbrellas – double protection from both the rain, and the slimy avian gifts from above. After I kept using my umbrella long after it stopped raining I started to feel a little bit delicate in my apparently unique desire to avoid being shit on. I’m guessing that by this point in Petulu white splotches are the equivalent of trendy scarves, or maybe a pair of ironic cuff links.

On to Bingin Beach, part of the small peninsula often referred to as Uluwatu in reference to the famous clifftop temple and world-class surf breaks that go by that name. Bingin is actually a few kilometres further up the coast but still features rugged, rock-lined beaches backed by similar sheer cliffs with all sorts of villas, guesthouses and warungs (small restaurants) clinging precariously to the steep sides and jockeying for space and views.

We spent four nights in this paradoxical paradise – unsurpassed in stunning vistas, fascinating low tide beach exploration, ocean-side dining and cheap seafood on the sand, while foisting upon us nightly dance music from the neighbours (seemingly the extent of night life in these parts), a roving troupe of monkeys that had no qualms about coming in for a closer look at our belongings and hissing menacingly if interrupted, and occasionally the unwelcome shock value of discovering an 8-inch crab emerging from behind the toilet in the dark grogginess of 4 am.

The monkeys actually only fully invited themselves in on our first morning, kind of like a neighbourhood welcome wagon, but with more prominent eye teeth, relatively poor personal hygiene and tails that, when blearily spotted from bed twitching just outside my bedroom door, could easily be mistaken for large, alarming snakes. Not that the reality was much more comforting.

Life on Bingin is dictated by the prevailing tide patterns, much more so than most wider, less rocky, beaches, or our pool in Penestanan. At low tide you could walk from one end to the other, probably a couple of kilometres all told, enjoying a captivating mix of powdery sand, coarse dark sand, a vast variety of giant rock formations to be navigated still glistening and dripping from their recent submergence teeming with excitable little crabs, plus all manner of  intricately carved tide pools – some with sharp edges requiring extreme caution, others coated in soft reddish algae that provided both traction and comfort like new carpet, or the brand new rubber gloves you’ve been saving for someone special.

At high tide, on the other hand, suddenly our list of accessible destinations shrunk to just our house, the warung next door, which to get to in a dry and unbuffeted state we had to expertly time the incoming waves, or the ledge below us occupied by a variety of discarded construction material and occasionally an unfriendly-looking monitor lizard large enough to require contortions to fit in the trunk of a car.

Of course, I didn’t blame him for his less than sunny disposition toward shirtless bipeds after, further down the beach, we stood on the sand taking photos of one of the giant reptiles as it made his way nimbly straight up the side of the cliff, only to watch a local teenager come running out of the water and race past us to viciously hurl a rock the size of a grapefruit at it from no more than 10 feet away, hitting it square in the back with a dull thud and enough ferocity that I would have expected it to tumble writhing to the ground.

Instead, it didn’t even appear to register this unprovoked assault, simply continuing up the rock seemingly unfazed, with possibly just the slightest increase the urgency of his pace. We just stared at the kid in shock as he calmly turned and walked back into the water to return to his fishing like it was nothing.

We didn’t say anything, of course, having no idea whether this was just a Balinese version of a kid burning ants with a magnifying glass, or whether it was actually another chapter in an ongoing battle between humans and local monitor lizards notorious for all sorts of damaging mischief such as stealing food, murdering chickens and tickling people’s feet while they’re trying to have sex without laughing.

This area is also a very highly regarded surf location, although by all accounts only suitable for the expert crowd, not surprising given the sharp rocky landing areas and the fact that restaurants are outnumbered by small shops advertising board repairs. One can only imagine the kind of effect a wipeout capable of badly damaging hardened fiberglass might have on a person’s relatively fragile bones and large variety of soft, flimsy body parts.

Just once did we bother to brave the stairs back up to the top of the cliffs and the relative civilization waiting there, heading down to Purah Uluwatu, one of Bali’s most famous temples, not so much for its relatively average size, or the standardly large contingents of Asian tour groups funnelling through its narrow passages, but because of its sensational cliff-top location.

The views both from and of it are both iconic and tinged with an extra dose of adventure for having to do your framing, focusing and gushing all while simultaneously remaining vigilantly wary of the Devious Monkeys of Uluwatu, famous the island over for their stealthy mischief and disturbingly coordinated group efforts to dextrously make off with an impressive haul of cameras, iPhones and, most impressively, the glasses right off people’s heads. So I heard.

Not to worry, though, it is not as though these particular monkeys have somehow sped up the evolutionary curve and are going to be wearing Prada shades in the clubs at night and posting shameless selfies all over your Facebook page, but are simply smart enough to have learned that these shiny treasures can be readily ransomed for fruit from the local guards.

The visit was capped off by a traditional Balinese Kecak fire dance – flamboyant costumes, intricate hand and dance moves, and convoluted, mildly implausible supernatural storyline, all surrounded by the backdrop of 70 shirtless dudes chanting and swaying like male strippers capping off the Nude Lion King with a drawn-out version of Hakuna Matata.

On the other hand, Hanoman, the evil monkey god, spent some time scampering through the crowd, picking phantom lice out of tourist’s balding fringes and occasionally stopping for quick selfies while flashing crowd-pleasing peace signs (apparently Asians and evil spirit monkeys fully agree the two-fingered peace sign is a vital part of every good photo), so it’s safe to say traditional accuracy wasn’t necessarily job one.

But the magnificent cliff’s edge location, overlooking the infinite ocean and slowly sinking orange sun, was worth the price of admission alone. Having the girl in front of me slowly, and apparently obliviously, continue sliding back into my bleacher space until I was practically tickling her neck with my fly was simply a very odd side effect. 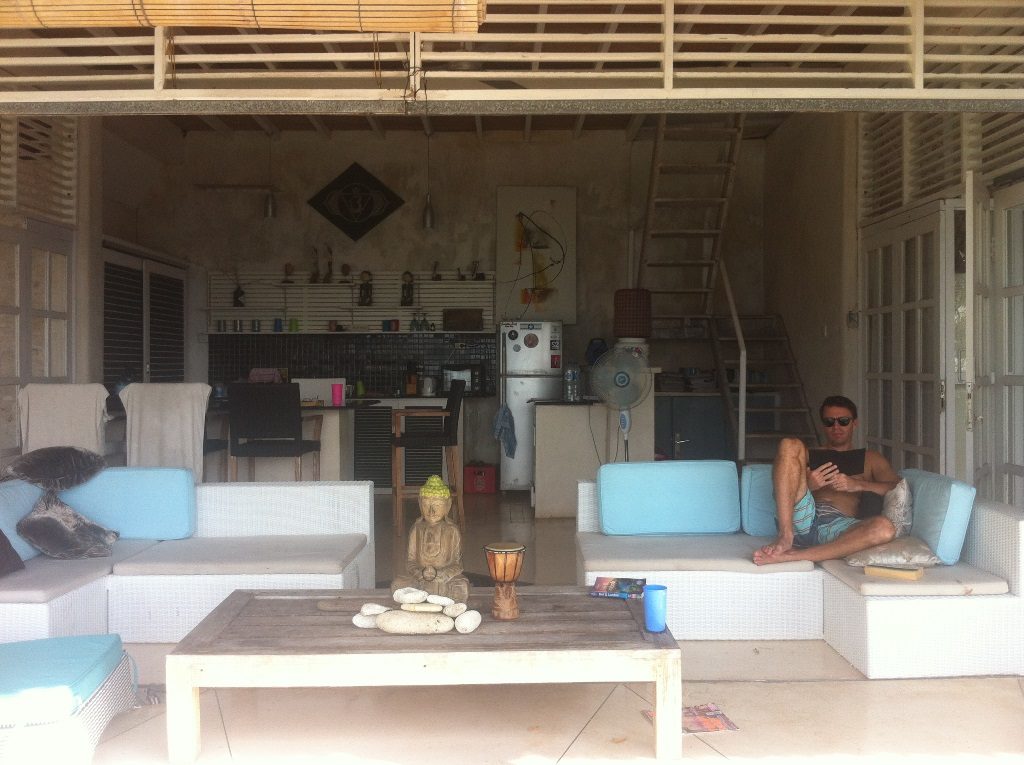 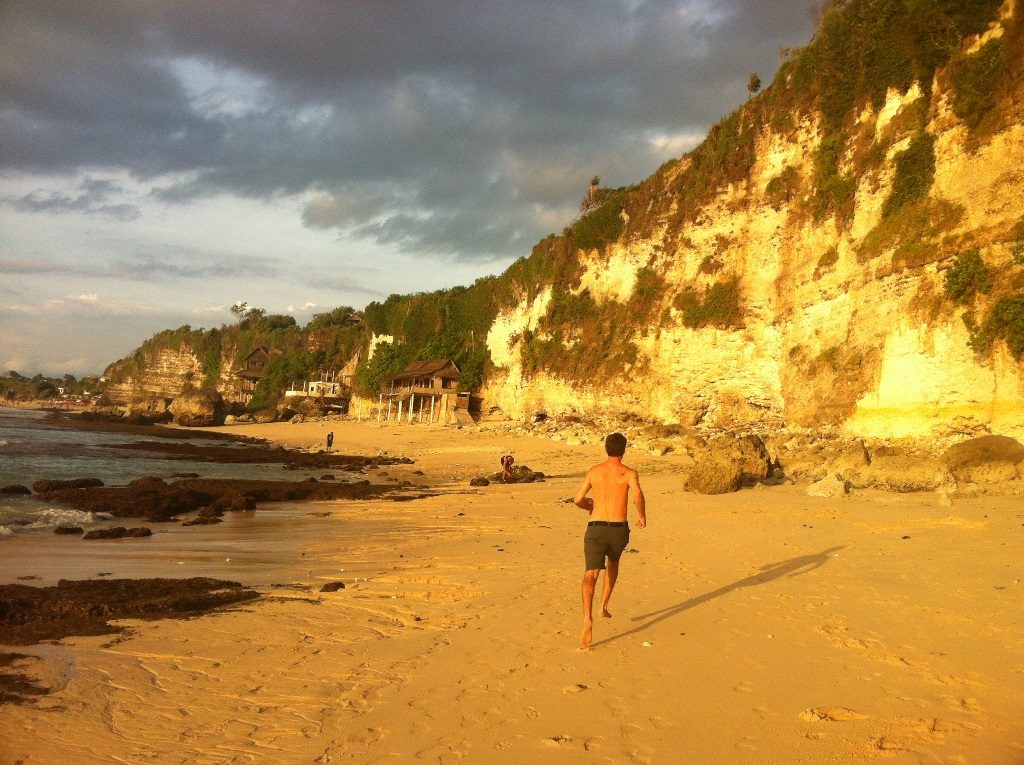 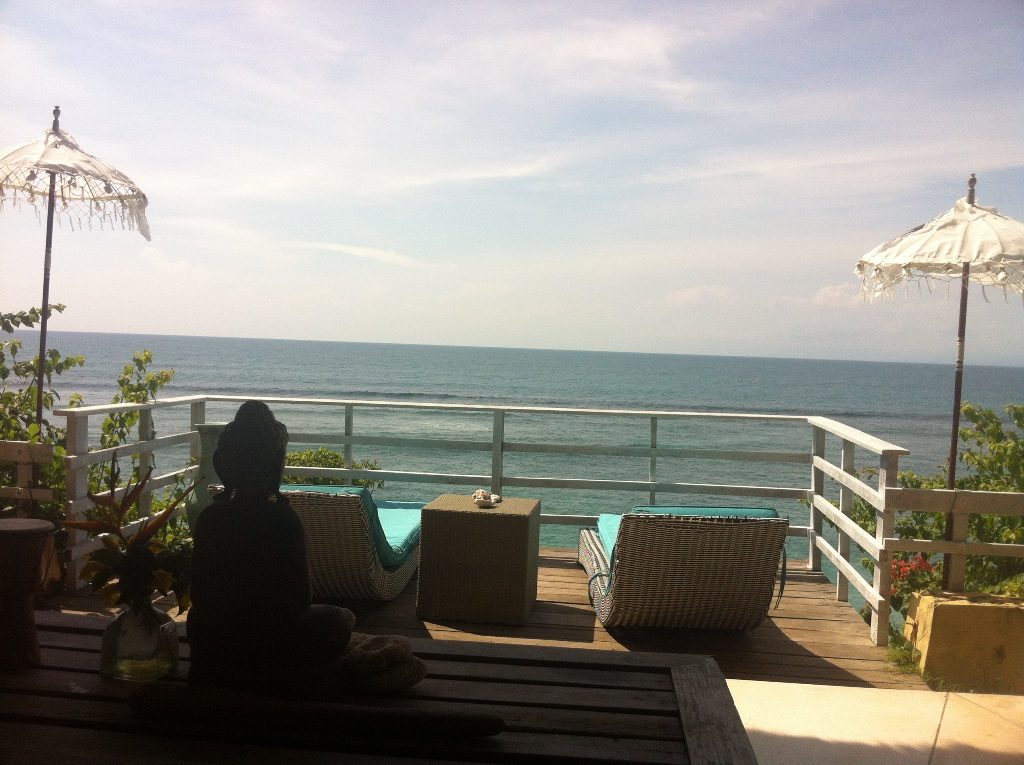 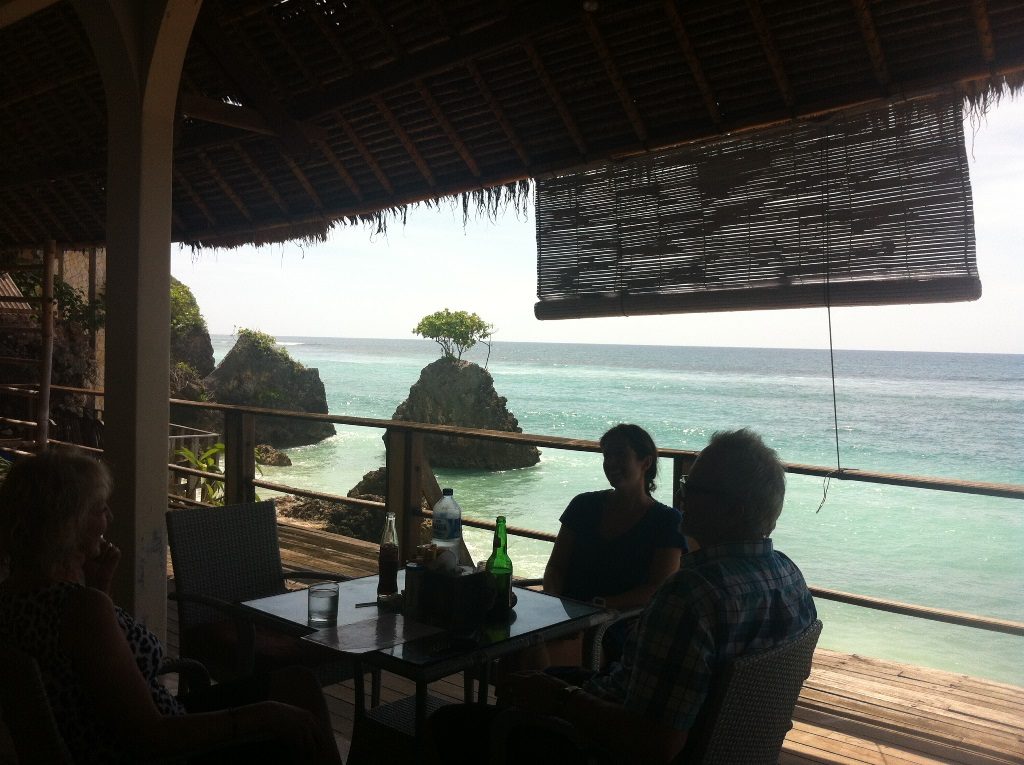 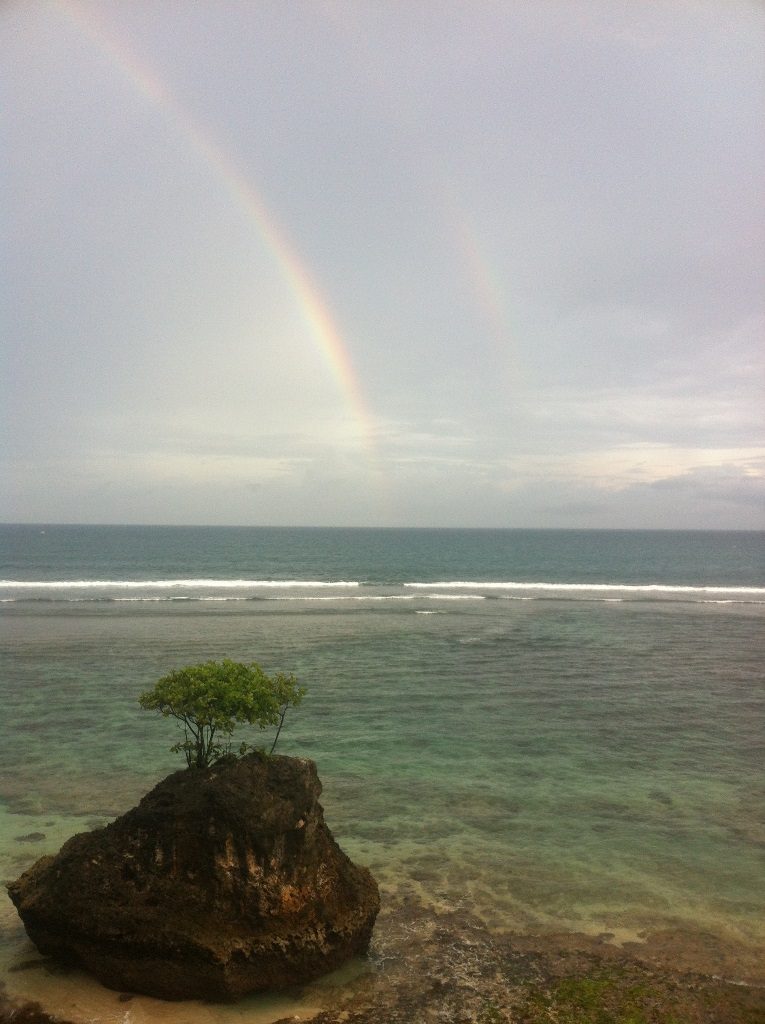 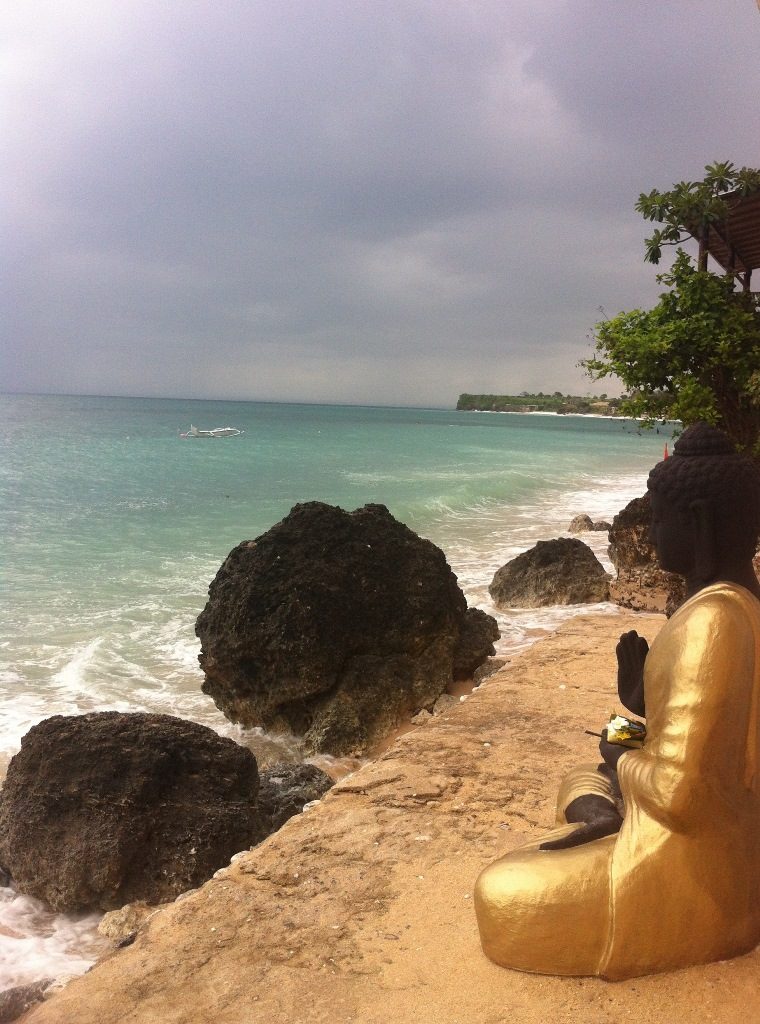 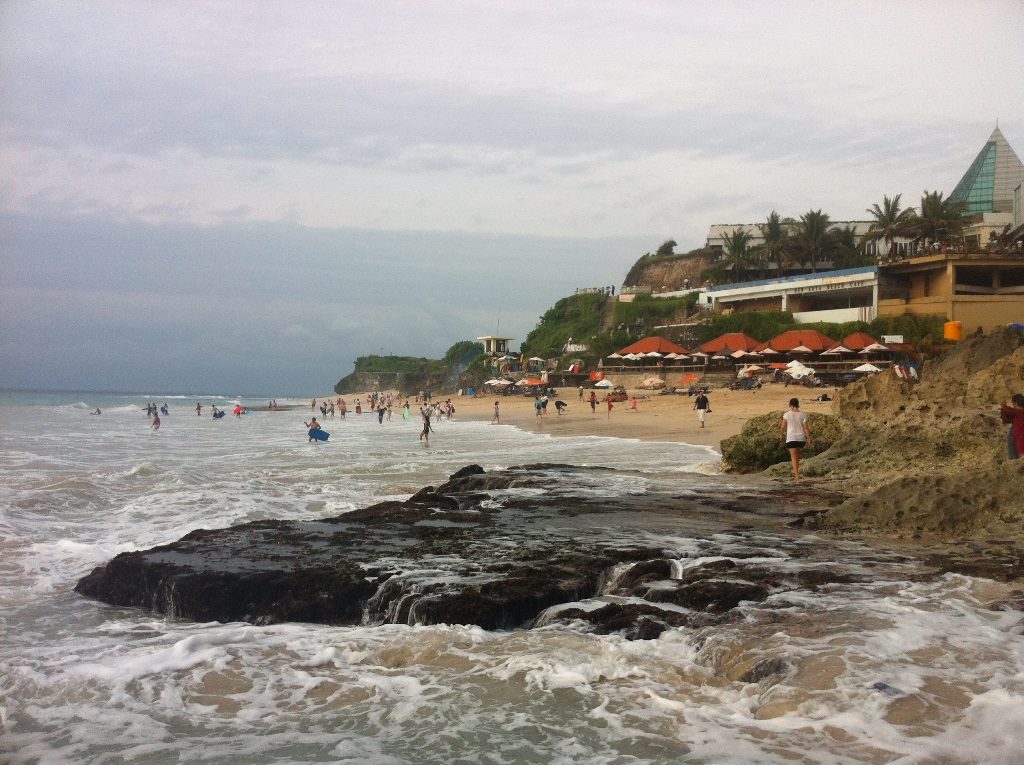 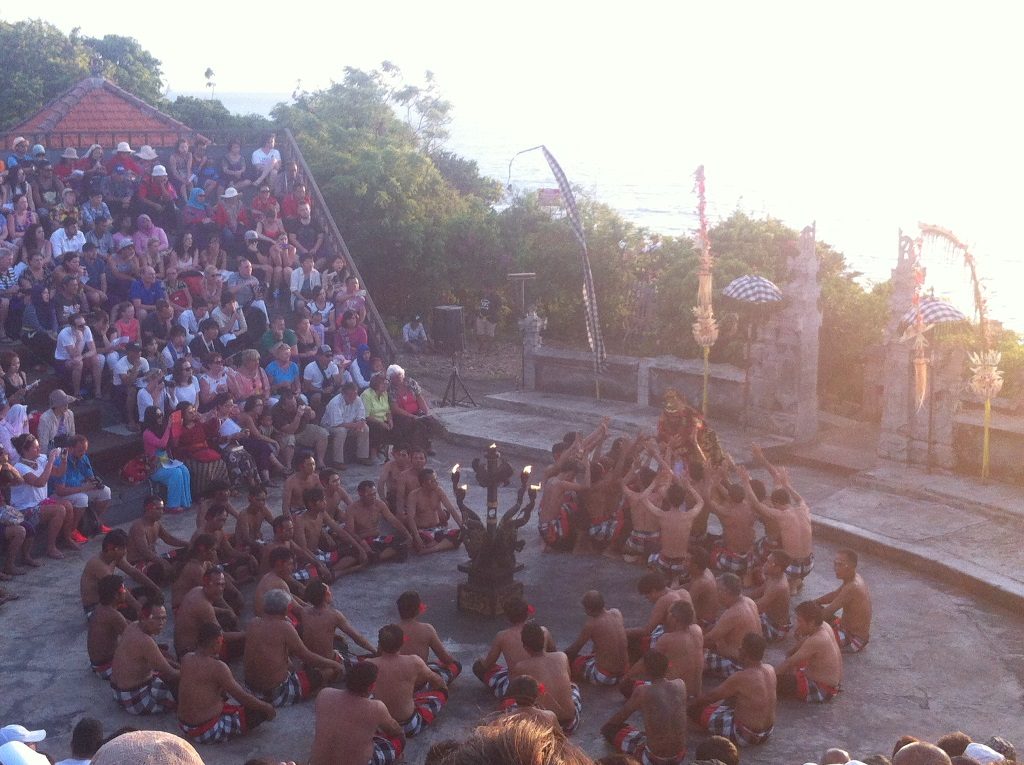 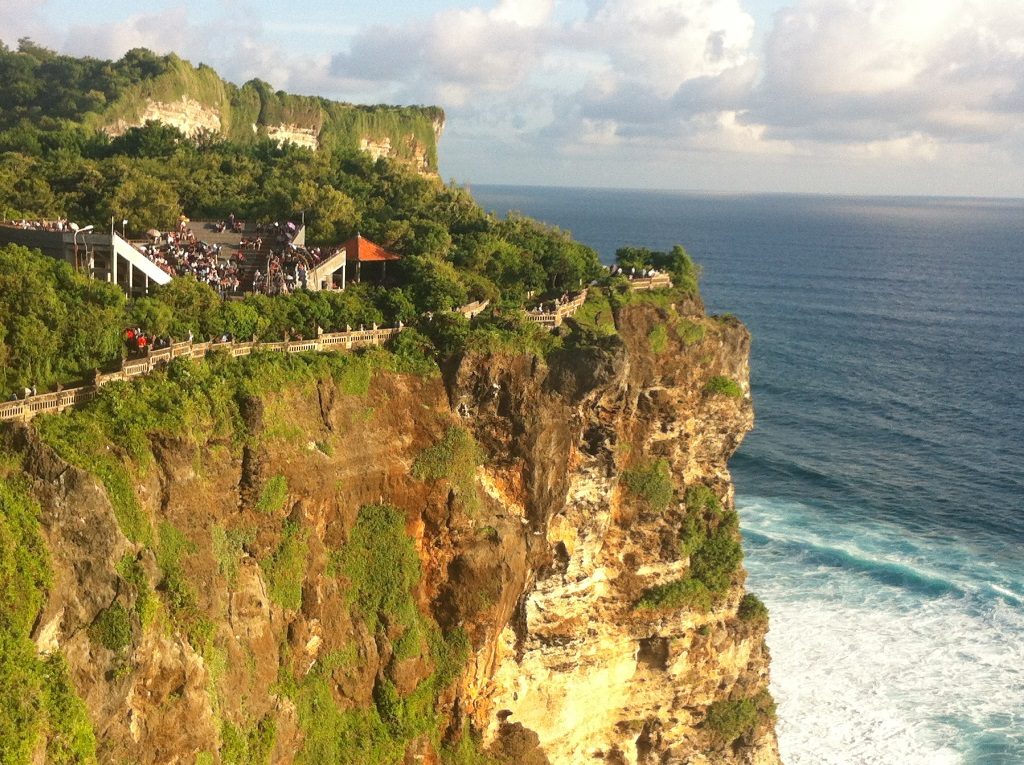 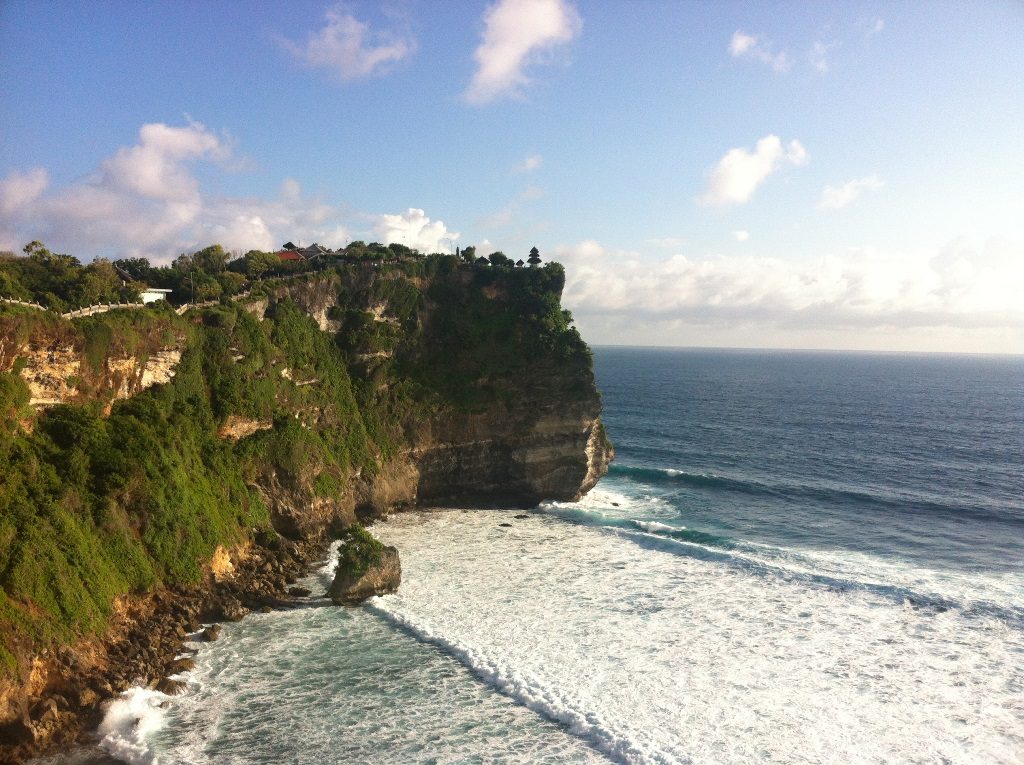 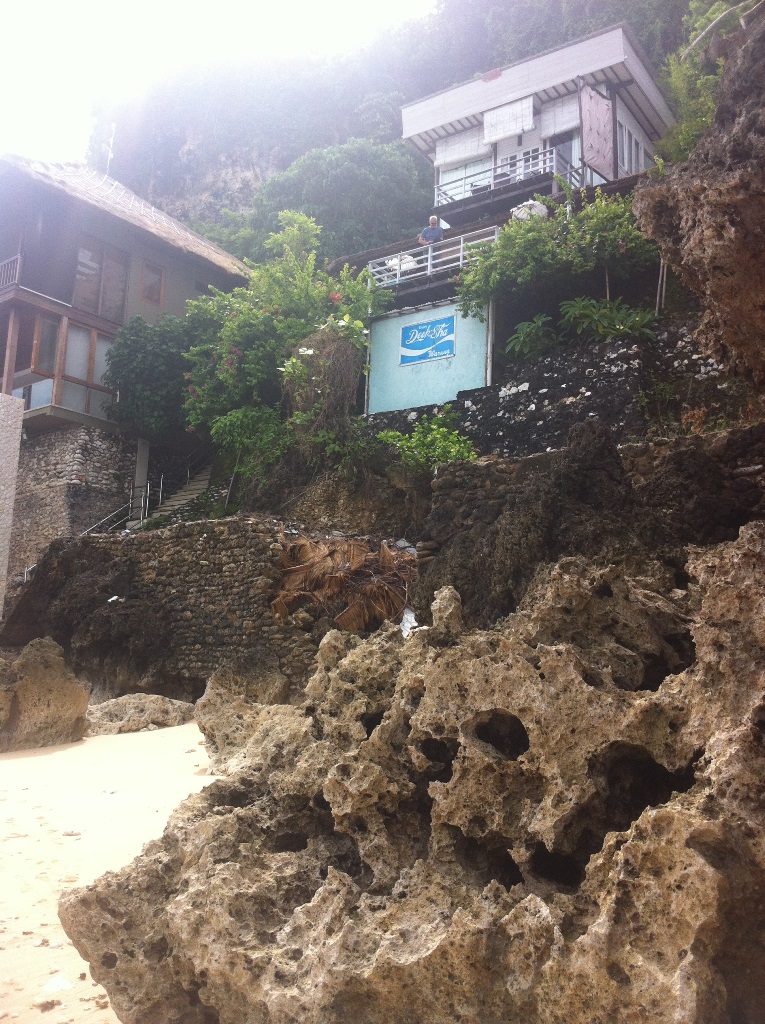 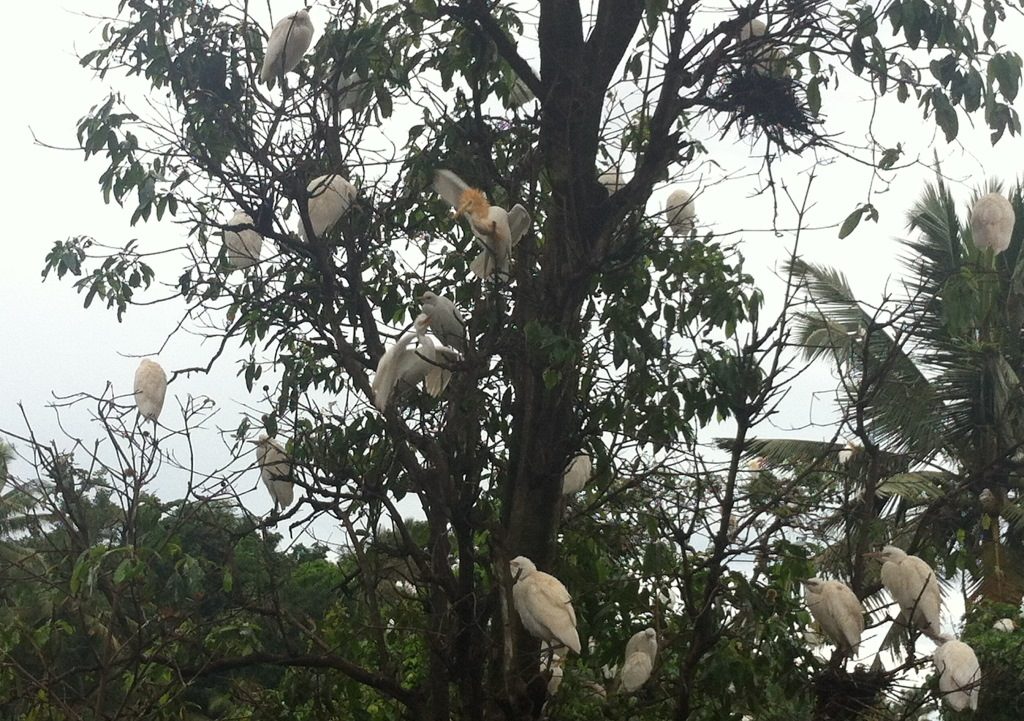