Where to Stay and Eat in Varkala

Sadly our time in Varkala is now winding down and by the time you read this we will probably be on some type of bus or train to Alleppey to experience the famous “Keralan Backwaters” – reputedly all the mosquitoes and laugh out loud “booters” you can handle. We really enjoyed our time here, very relaxed, although as happens any time you spend a lot of time in one place and eat out three times a day, just deciding where to eat can become a bit of a chore. The busy season is noticeably declining as well, although for no particular reason that we’ve been able to discover. The weather’s the same, still hot, still windy in the afternoon, still cold as hell in Russia, Germany and England, the three countries that seem to contribute the most lazy sun worshipers, serene yoga enthusiasts and obsessive juice fiends to the short Varkala tourist season. Nonetheless, everyone agrees – “February is dead, everybody leaves”. Fair enough. Looks like we will be too.

Let’s see, what haven’t we talked about yet?

It’s a damn epidemic, seriously. I know we do it at home as well, more than we even think about probably, but it definitely weighs on your mind a bit more when it’s the sweaty palm of some kid selling sarongs who has fondled more damp fingers in the last half hour than the doorman at Mustang’s Gentleman’s Club. Whose name is “Lucky”, apparently. And now that I’ve gotten sick once and it’s well and truly in my head after each and every moist flimsy touching I find myself staring intently at my palm as though if I concentrate hard enough I’ll actually be able to spot sinister clusters of amoeba conspiring to turn my bowels into a bubbling, churning pool of turmoil and shame (much like Whoopi Goldberg’s hot tub). Which leaves us with two options: 1) take a completely different and inconvenient route to avoid said aforementioned germ trap, which tends to feel both unnecessary and like a mildly disheartening surrender each time, or 2) walk stiffly past with our hands stuffed deep in our pockets rebuffing his friendly, outstretched hand with fear in our eyes and an idiotic shaking of our head like we’re turning down at bite of pie for no good reason at all, really. I think we can all agree, not great choices. So we chose 3) change hotels. Extreme? Maybe. Effective. Certainly. A great story? Debatable.

“How was the beach?”

This is used exactly the way people in Canada might say “How’s it going?”, “How are you?” or “How’s it hangin’ (if you were born in the mid-70’s and still work at a gas station)?” In other words, as a meaningless greeting that is less abrupt and empty than “Hi” but still safer and more generic than “What’s new with you?”, “How’re the kids?” or “Did you know we can see the outline of your scrotum through those pants?” The first few times we made the mistake of explaining that we hadn’t, in fact, just come from the beach but had actually just been walking north of the village, and that we stopped for lunch at this place with a view, and that Laynni had a Greek salad and asked for no onions but, of course, it came with onions anyway, wouldn’t you know it? Eventually, though, we realized, thanks to the blank looks and people literally walking away as we talked, that this was actually a rhetorical question based solely on the fact that going to the beach is the most popular activity around here and that they no more want to hear the details of our day than you want to know about how the woman working at the lottery ticket booth hasn’t been sleeping too well, on account of the neighbour’s dog, and how once she’s awake she can’t stop thinking about how her ex is 3 months behind on the child support, and is it normal for a 7 year old kid to collect cat ears and keep them pinned to a piece of plywood sorted by colour, age and how much of a fight it put up? Not if you’re in a rush.

There are a surprising number of lifeguards down on the main beach, Papanasam Beach, I think it’s called, although we’ve found their specific duties somewhat difficult to pinpoint. Automatically one would assume their main task would be to keep people from drowning. However, based on visual surveillance we suspect their mission statement may not actually be so straightforward. First of all, they don’t wear swimming gear but rather crisp, heavy baby blue tunics with very uncomfortable looking dark blue short shorts. Also, the only time we saw one of them get within ten feet of the water he suddenly realized his error and went scampering away from the incoming ankle high wave like a Greek from body wax. Thirdly, any time they’ve resorted to blowing frantically on their desperate little whistles we’ve been unable to identify any particular water related dilemma taking place. It’s always the same – “tweet”, “tweet”, “tweeeeet!” eventually getting the attention of everyone on the beach and in the water who then alternate between looking at the whistle blower and looking all around in a confused manner trying to determine what the hell they are whistling at, exactly. The answer to that, we have decided, is actually far less likely to have anything to with safe swimming than with warning groups of Indian males that they have spent just about enough time staring at the blonde with her top undone and a very becoming thong, and that they will almost certainly not be allowed to finish working on the impromptu sand hill they recently decided to build at the foot of her towel. Not a bad gig, if you can get it, chasing off horny gawkers while being paid to search out the most likely victims of gawking yourself, although we never did figure out why they usually chose to sit 2 and 3 to a plastic lawn chair, squeezed between the spindly legs of the guy behind them while locking in another friend between their own sweating thighs like they were about to tackle the Matterhorn at Disneyland, or were posing for a Skinny Men in Uniform spread for Hindi Skin magazine.

They happen a lot, and there is no way to tell if the power will be out for seconds, minutes or hours. Since we’ve only seen approximately 3 clouds since we got here we feel as though we can comfortably rule out thunderstorms. And I doubt that many of the 4 second long power cuts are caused by reckless taxi drivers demolishing a power pole with their sluggish Ambassadors. When it comes right down to it, though, my guess is that it’s probably just as simple as 50 million people all plugging in their mustache trimmers at the same time.

The Age of Technology

First off, it’s not like we’re unfamiliar with things like webcams and video messaging. Still, it makes you look twice, and think about where travel might be headed in the future, when you see the girl at the table next to you holding her laptop out over the edge of the balcony to show her mom yet another wonderful Varkala sunset. Maybe we’re closer than we think to acceptably replicating all actual human experiences in a dank basement filled with the hum of power bars, the glow of computer screens and the pungent aroma of USB cables and virginity.

Now for some practical Varkala information for people reading this in anticipation of a visit of their own:

Hotels (in order of value):

Saraswati – 800 rp/nt on lower level at the back, small deck, free purified water, use of washing machine, free wi-fi (that makes you log in every 10 minutes – annoying as hell but it works, I guess), unscreened vents in room let in uncomfortable amounts of mosquitoes and spiders

All three had very friendly staff.

And there you have it – 3 ½ weeks in beautiful Varkala and now we need to actually move on in order to provide some evidence to our claim that we are actually “traveling”. Not sure we’re mentally prepared for a stressful return to the Bus/Train/Taxi/Rickshaw World but, hey, I’m sure it’ll come back to us, like riding a bike, or stepping on old people’s feet on the subway. 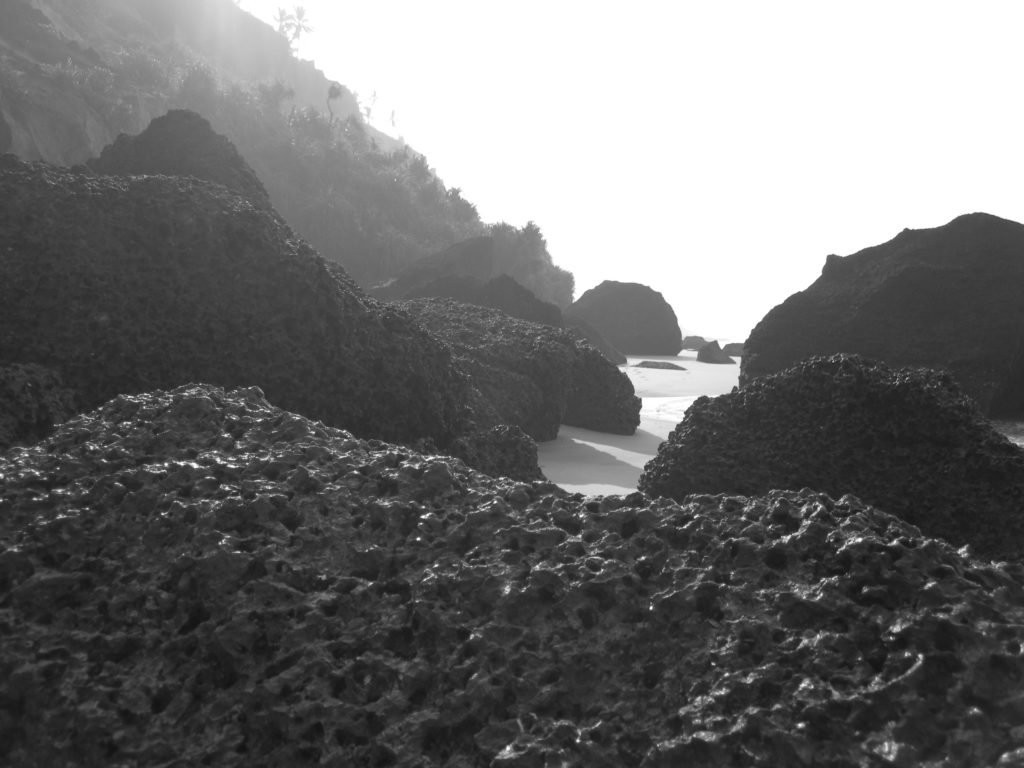 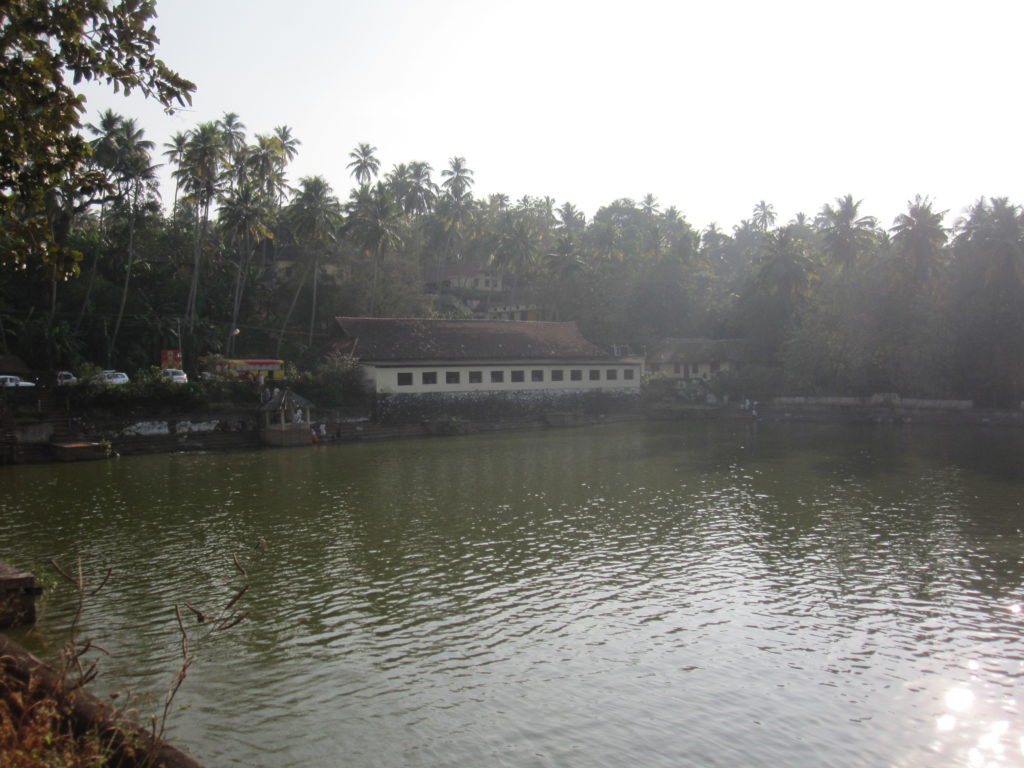 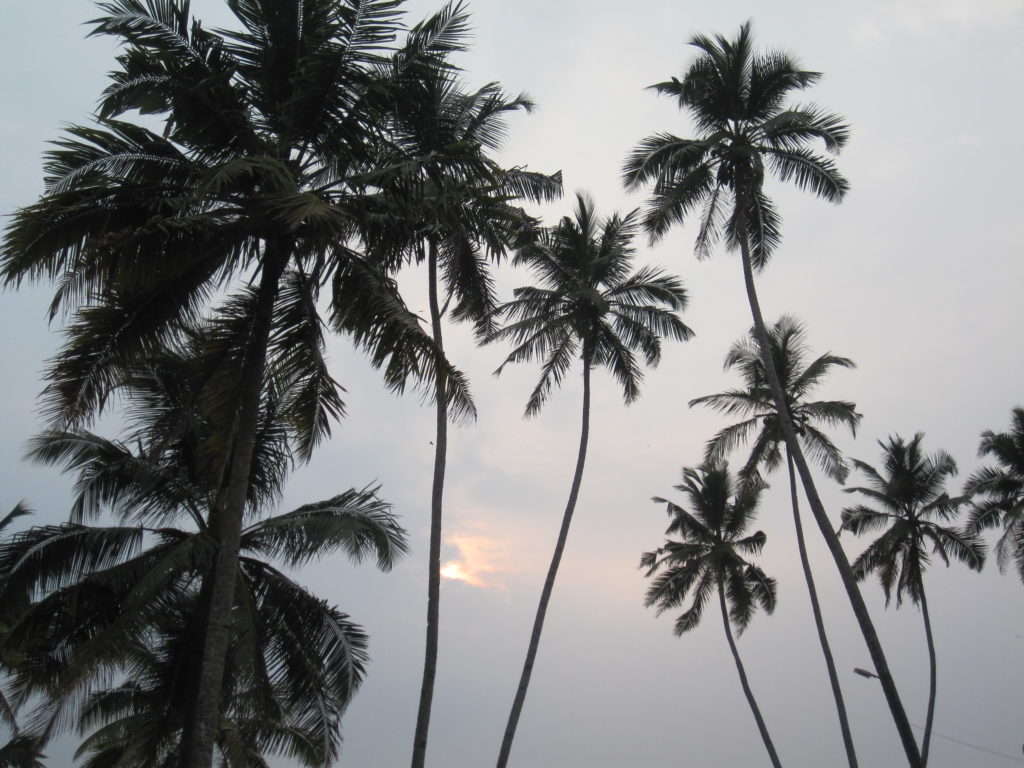 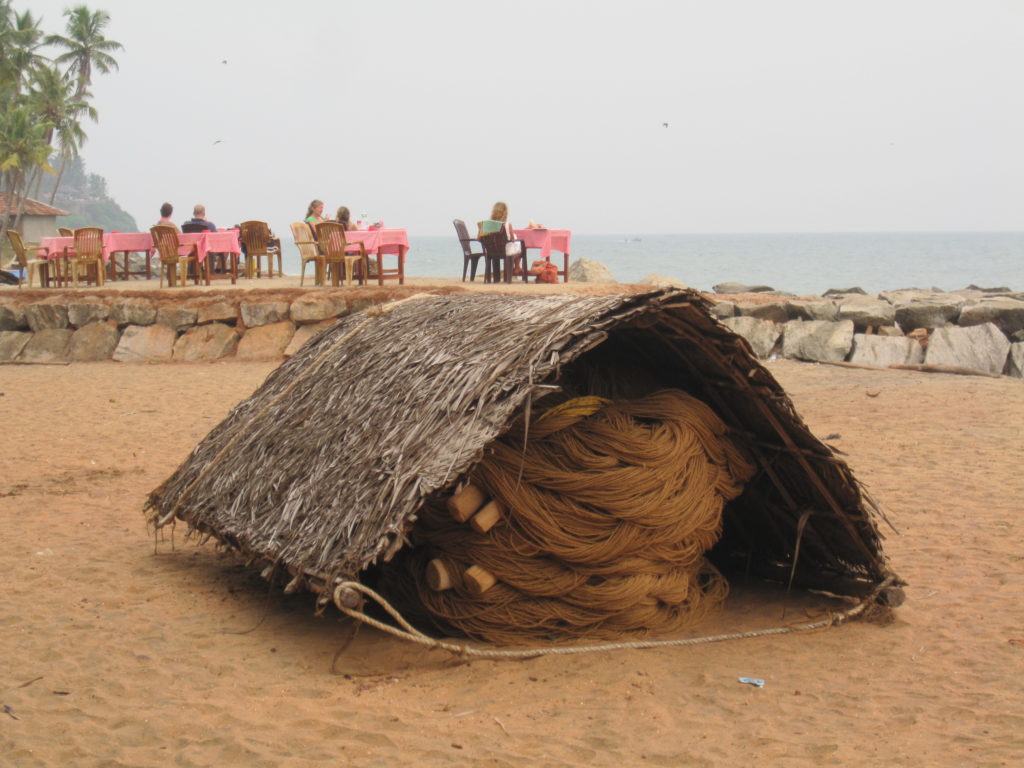 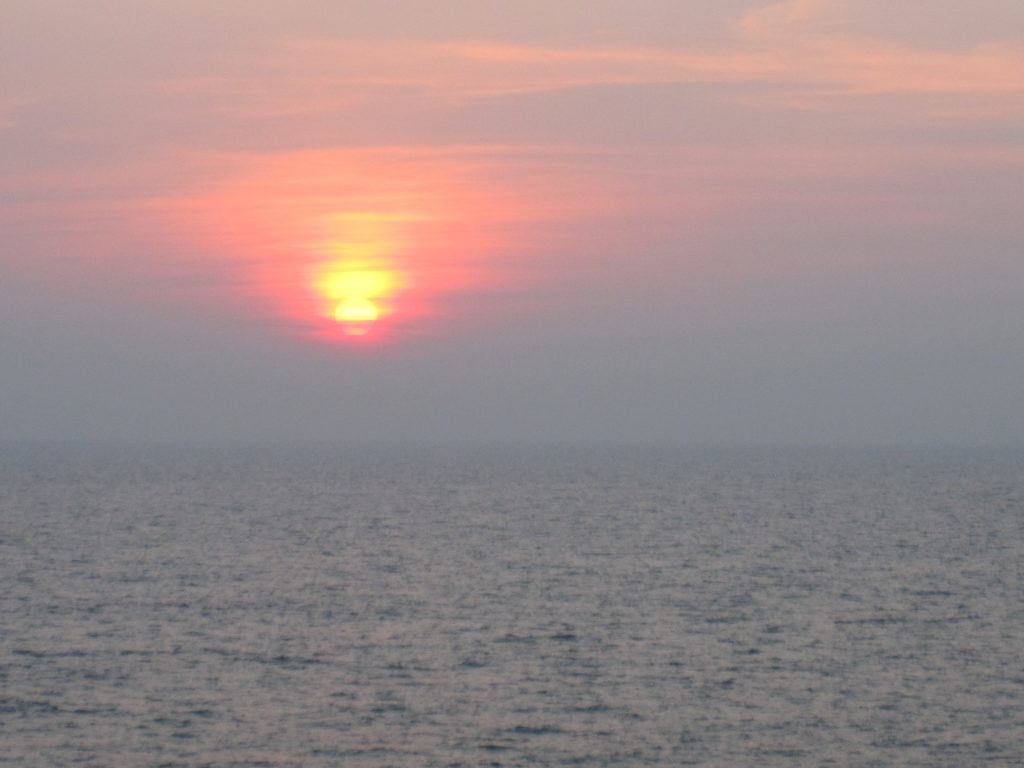 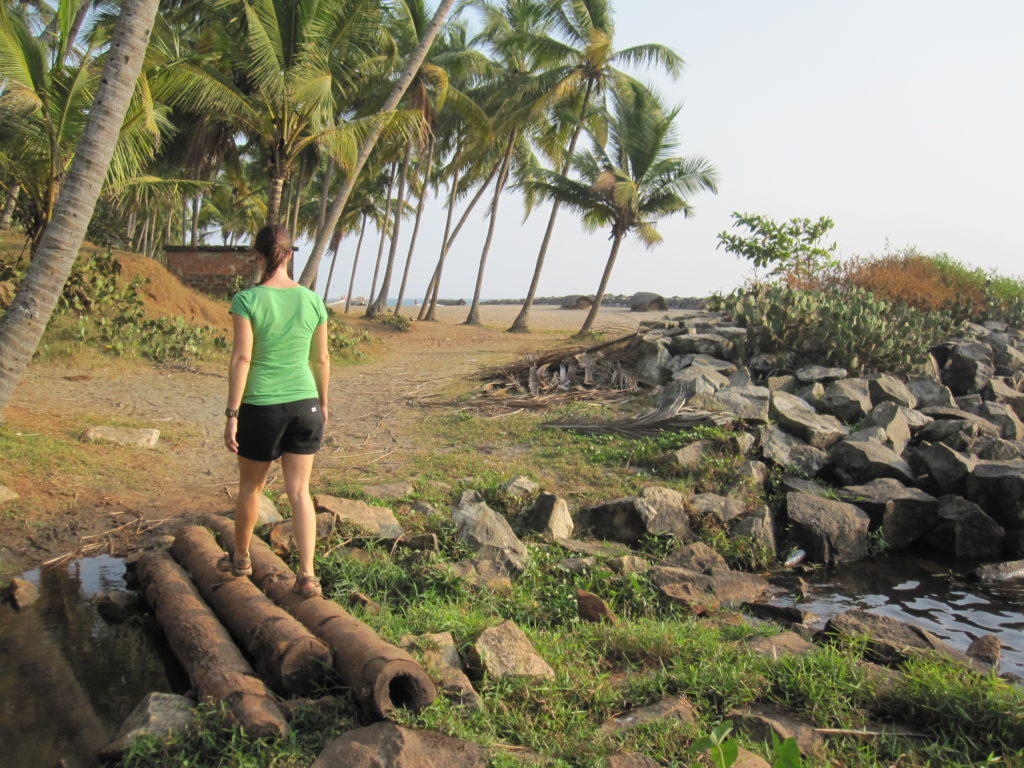