A four day epic that follows the trials and tribulations of a group of 16 English-speaking misfits as they make their way through the Andes along the classic Inca Trail in search of the iconic Macchu Picchu.

Dean “One Pair Of Pants” Johnston

Laynni “My Hair Is Only Sort Of Greasy” Locke

Known for his unstoppable enthusiasm and immaculately trimmed moustache, the indomitable Freddie did a masterful job of inspiring unity and teamwork among the group, eventually molding us into a true family. As in, “Ok Fahmeelee, gather round to hear some approximately accurate stories about Incan history”, or “Now, Fahmeelee, it is probably best if you pee in the dark, and don’t use the bathrooms…”

He was quick to point out the rare sections of the trail that were going to be “a piece of cookie”, and entertained us with his chilling – and confusing – tale of the ghosts of two dead tourists that appear in the dead of night, headless yet inexplicably with white faces and long tongues, like members of KISS in expensive fleece.

The 16 person cast gets acquainted on the 3 hour bus ride to the trailhead. Around the horn it goes, names and nationalities presented to perfect strangers as validation like ID badges, or black light hand stamps at a strip club.

Sorry, what was that?

I think you’re missing the point…

Researchers have confirmed that over 80% of Americans believe having an NFL team qualifies you as a country. The same study goes on to show that:

In all fairness, we were all fully aware of the cities they mentioned, unlike if we were to blithely toss out names like “Saskatoon”, or “London”…

Of course, depending on whether or not you enjoy Flight of the Conchords, and how sexually attractive you find mud-covered sheep, New Zealand could be considered a stretch as well. If you want proof just type in “Zealand” and see what your spell checker thinks about it.

A crew of 21 porters was enlisted to haul the gear (tents, chairs, tables, food, cooking equipment, propane, prophylactics), set up the tents, cook the food, clean up and mainly to lurk outside tents looking shiftily at the ground. While carefully regulated these days, the loads these hardy mountaineers carry up steep inclines at high altitudes are still shocking to behold. They actually seemed faster than the Nepali porters (or Sherpas), possibly due to the abundance of coca leaves available for chewing, and the extra-sensory perception resulting from their freakishly dilated pupils.

In a tribute to the fierce Inca warriors of the past, Freddie seeks out a rare bug which he then crushes between his palms, creating a vibrant red paste. This is then rubbed on my face to create a brave and fearsome appearance. And trust me, no matter what you may think now, in the end you would definitely run if you came across a 150 pound Raggedy Andy with three day stubble.

Besides hiking up and down 44km through the Andes at an average altitude of 3,500 metres, as our most imposing obstacle was Dead Woman’s Pass. It’s name comes from the fact that when looking back from further down the valley the pass looks like a pregnant woman lying down with her head on a pillow. Clearly the only possibility being that she is dead, since everyone knows that live pregnant women only do two things: crave weird food and crush the hand of their mate while in labour….with hilarious results.

A 12 km hike, 1,200 metres of elevation gain, peak altitude of 4,200 metres, and the sad discovery that the wings Red Bull gives you are mostly metaphorical. Then at the top, we take some group photos, build a spiritual Jenga structure with rocks collected along the way, pound some shots of rum, then straight back down the other side, dropping 500 metres in less than an hour. My knees haven’t shaken like that since the time I paid that guy who sleeps outside the mall $5 to help me trim my pubic hair.

Freddie, Dean, Nick and Thomas graciously allow the porters to beat them at soccer despite a controversial disallowed goal and the loss of the first ball about 300 metres down the side of the cliff, forcing to finish the game using a half inflated volleyball that felt like kicking one of Kate plus 8´s overworked breasts.

“Something About Mary” Gross Out Scene

In the bathroom at our first campsite someone who probably should avoid lentil soup nearly managed to defecate a complete circle around the hole in the squat toilet. Be on the lookout for “Feces Donut”, sure to become the next major masterpiece in organic art.

Full group participation was achieved regarding the definition, merit, origin and humour of “The Dutch Oven”. Although no consensus was reached, majority ruled it “unlikely” that Edmundo the Cook actually used a Dutch Oven to bake the cake he presented on our last night. Just to be sure, though, the girls from New Zealand experimented with it in their tent the following morning but found it did not result in any cake, merely watery eyes and indignation.

Day 3 – 7 am – trail leading from camp. Hundreds of North Face clad foreigners swarm up the mountainside, shuffling and jockeying for position like lemmings with annual erections and a limited sexual window, gasping, panting and liberally applying sunscreen.

A smug yet nonchalant young deviant in charge of taking tickets for the much sought after shower available on night three set up his position 30 metres diagonally away from the shower doors, seemingly highly inconvenient and illogical until later, when some of the girls toweling off inside suddenly caught his eye when the door opened. General repulsion, with just a small side of envy.

Day 4, 4:30 am, final checkpoint before the last stretch to Macchu Picchu. Dozens of headlamps hover in the darkness like the holes in the ass of my black underwear. They cluster in loose groups awaiting their chance to attempt the final assault on one of the New 7 Wonders of the World, or to sneak off to piss in the bush, whichever comes first. Finally, the gate opens and the hordes burst through to rush down the path, not quite pushing and shoving, yet each adding to the frantic pace and helping to create a mile long line of puffy-eyed, camera-toting speed-walkers. An hour later we emerge through the famous Sun Gate to behold our first glimpse of the world famous Incan city. We take a few pictures and then sheepishly move on.

Energized by having our ultimate goal in sight, our weary band of Flashpackers scramble down the final leg, at once in awe of the beauty of the spectacular panorama unfolding before us, and frickin pissed to see the hundreds of people who arrived on the early train wandering about, acting all smug in their clean clothes, with no strange combinations of sweat and asparagus seeping up through their jackets, no sir. These train folk, the ones Freddie dubbed “The Lazy People”, only glance briefly in our direction the way one might look at a dirty stray cat timidly sneaking out of the bush to rummage through the remains of their smashingly successful block party. They quickly look away, instantly forgetting as they scoop up the last of the available tickets to Huayna Picchu viewpoint. Sorry, should have got here earlier I guess. It’s the irony I like.

Next up: Arequipa and the Colca Canyon 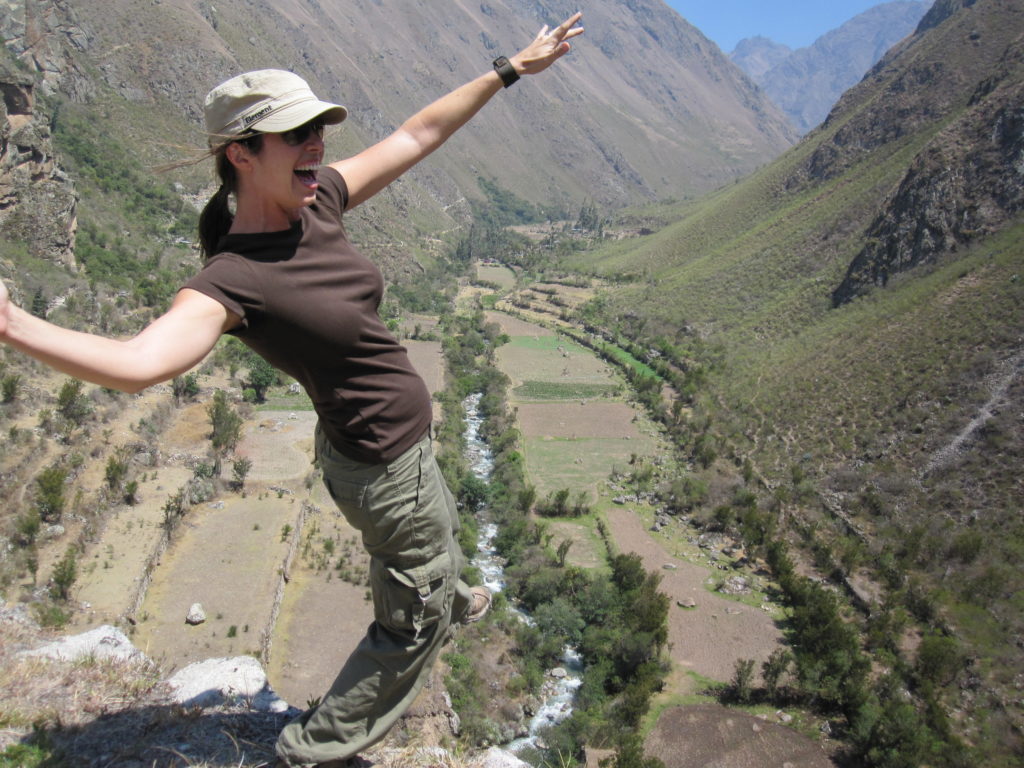 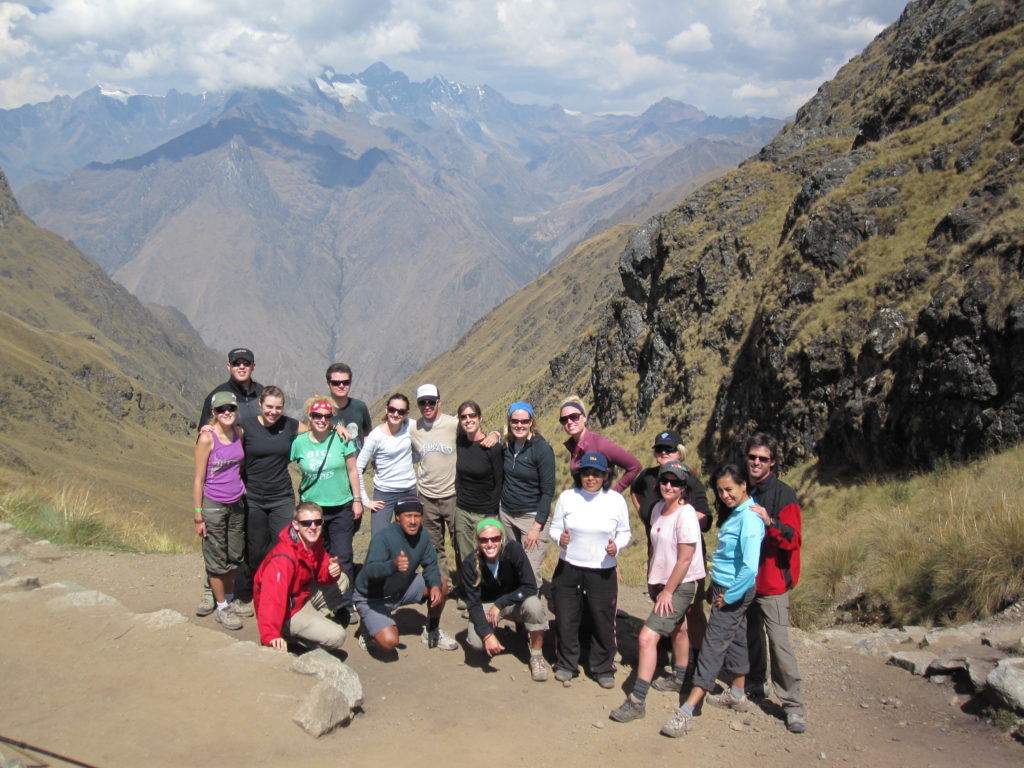 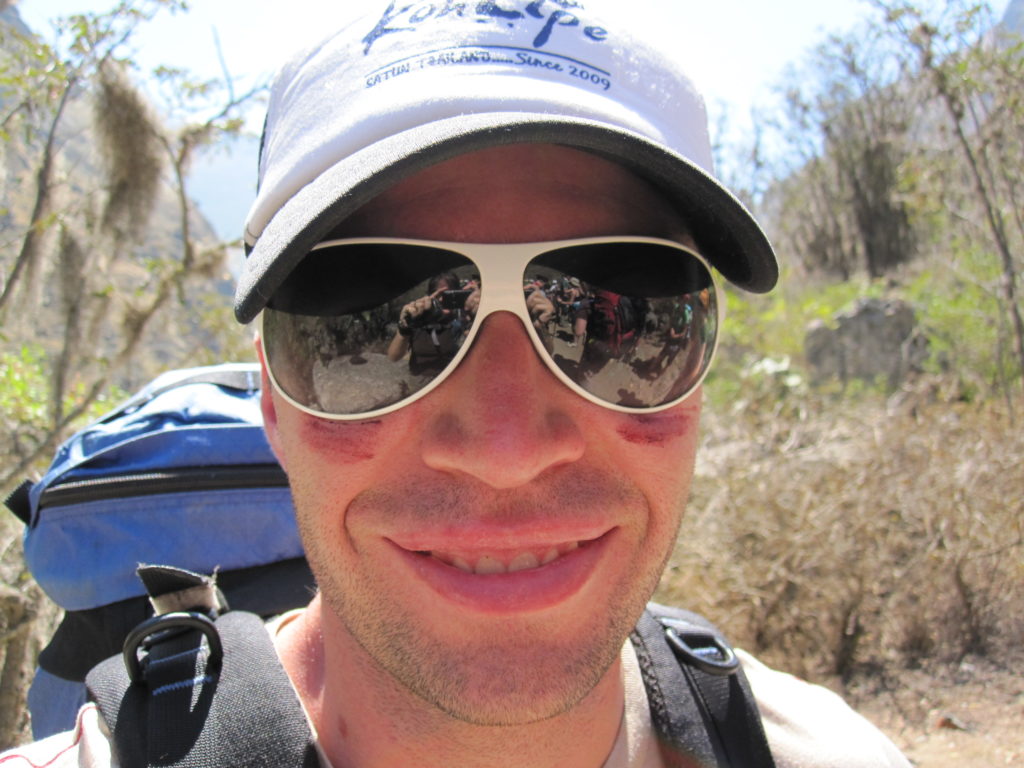 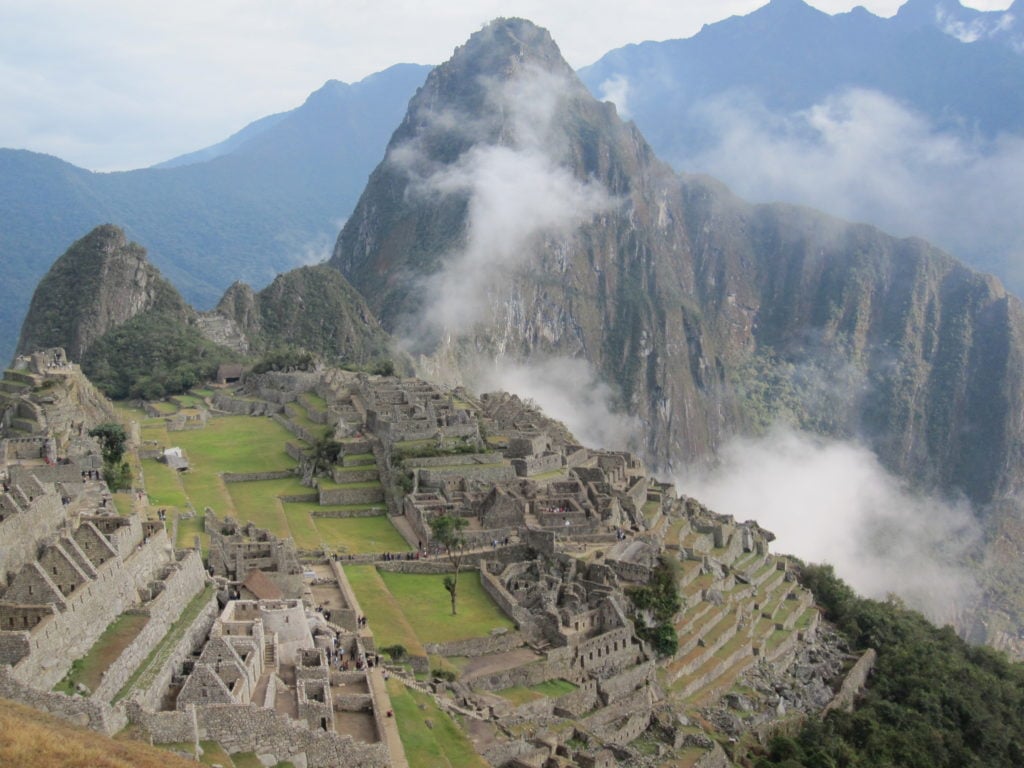 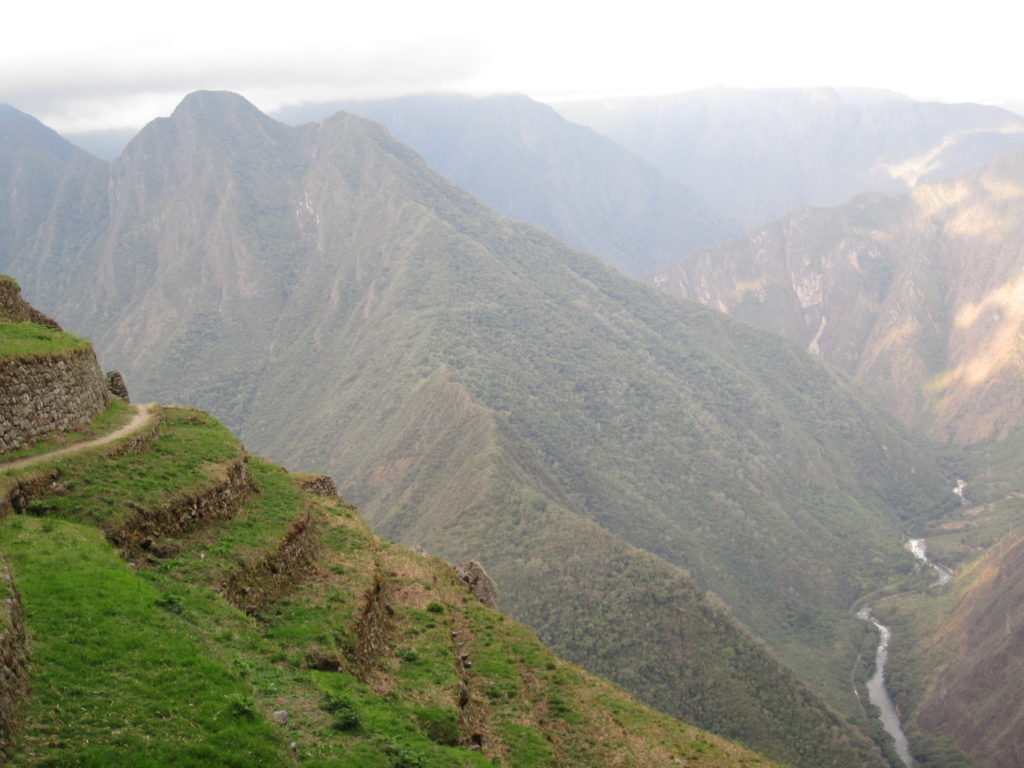 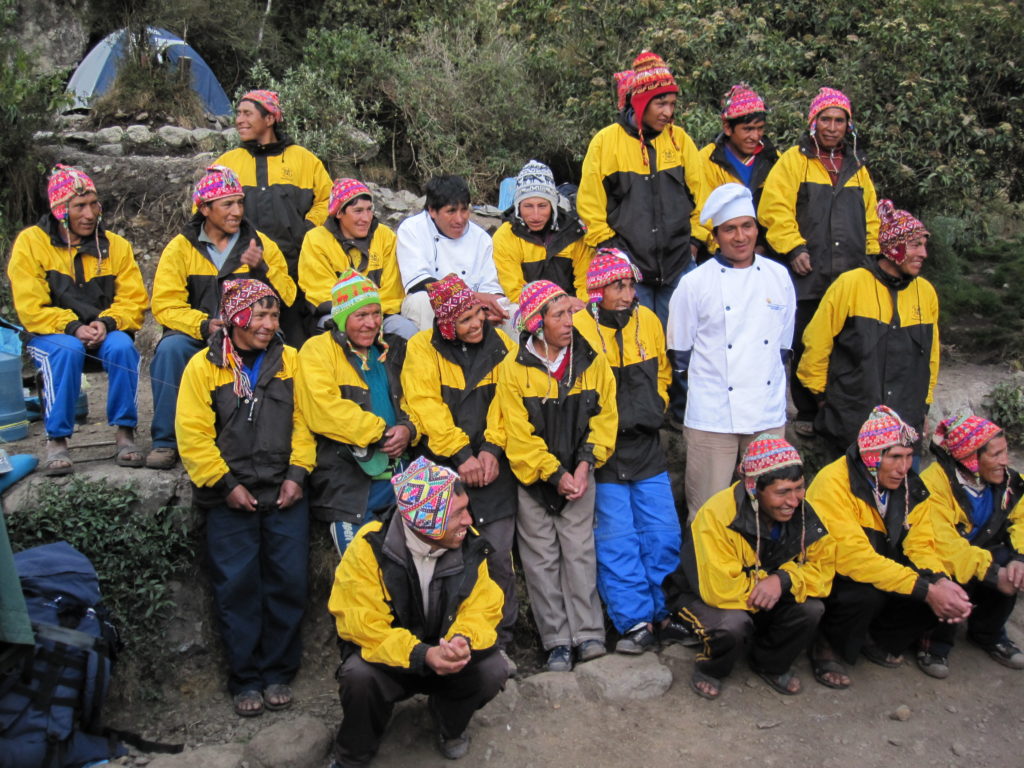 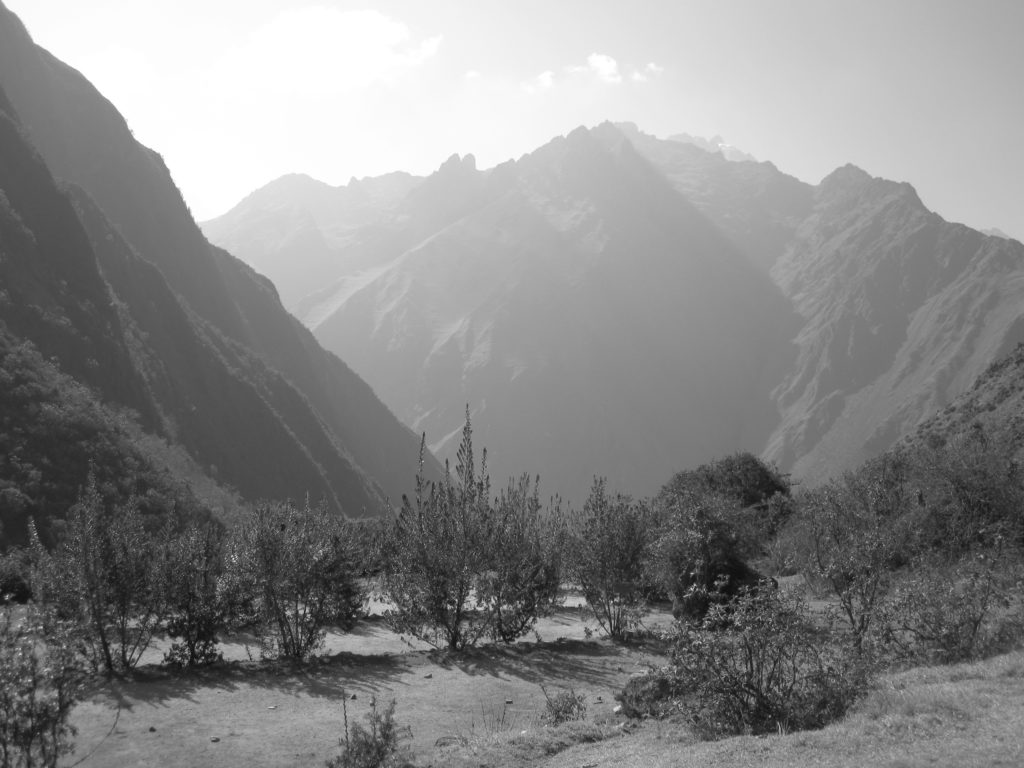 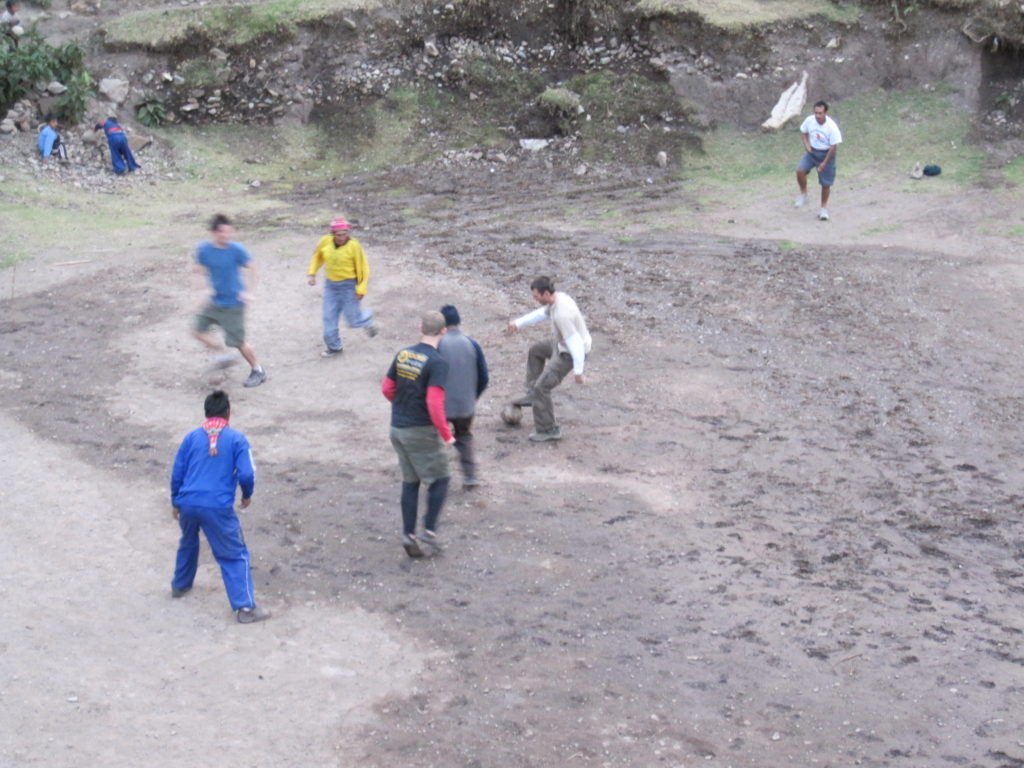 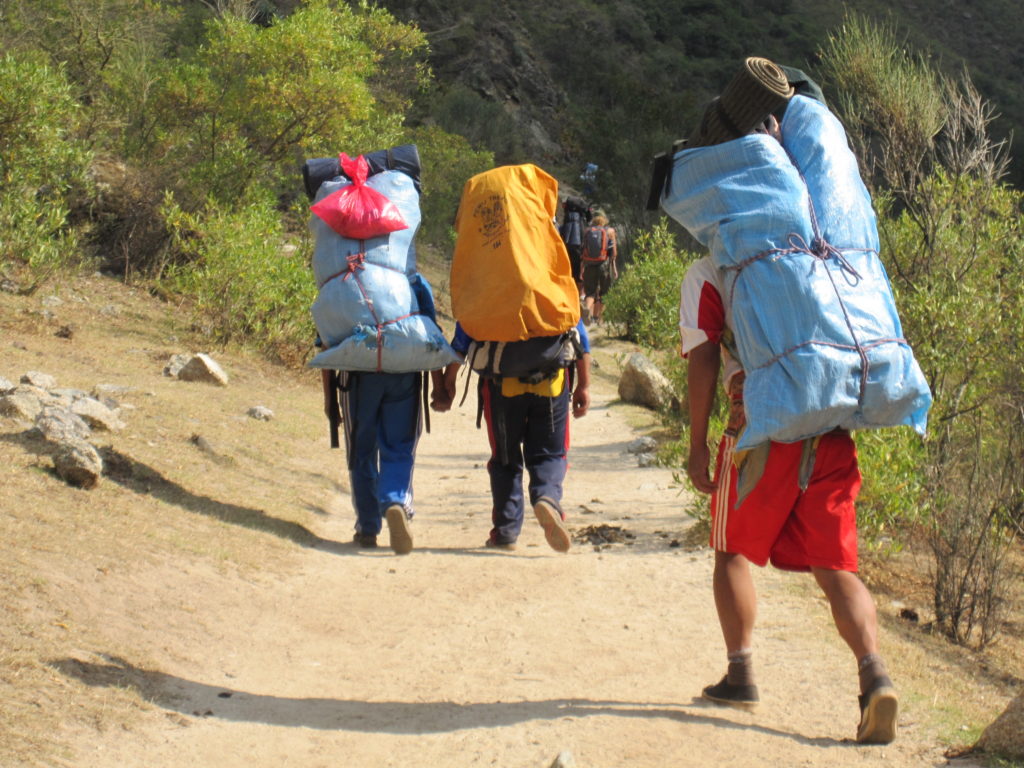 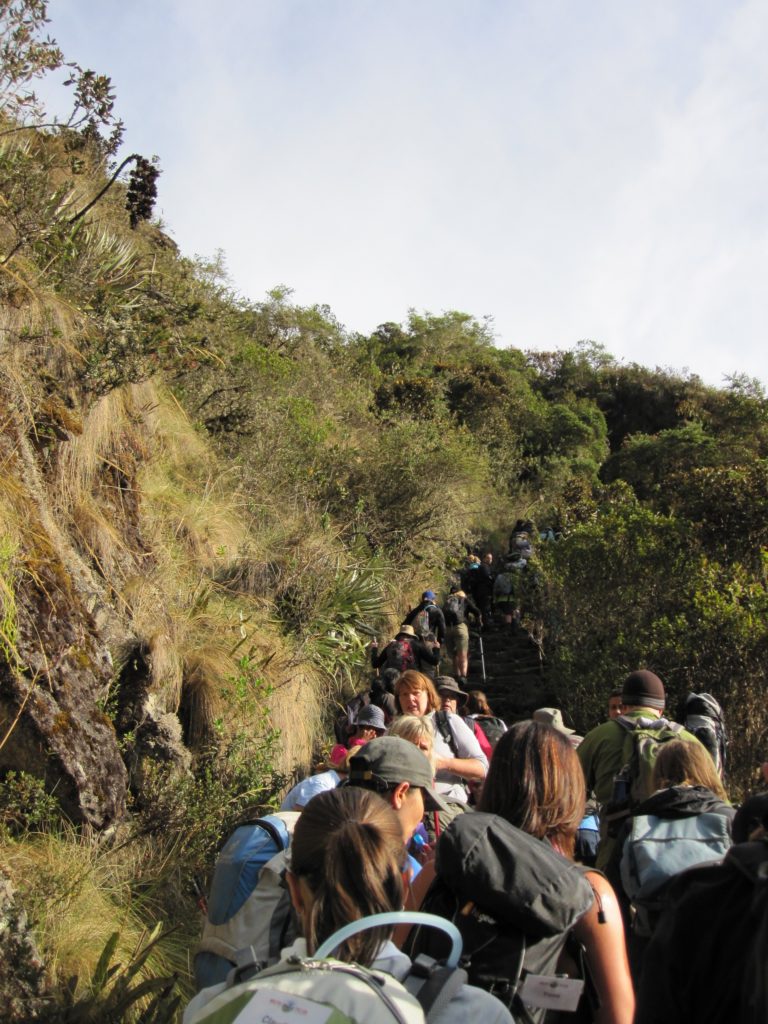