After our quick diving adventure in Tulamben it was time for yet another change of pace, in this case downgrading to virtually zero pace. Unambitious, sure, but an ideal goal for a visit to Nusa Ceningan, a tiny speck of an island sitting off the coast of Bali and completely unfamiliar to us up until a couple months ago. And we only learned to pronounce it properly on the boat over. So, just to describe its location a little more clearly – first you have mainland Southeast Asia, with Singapore, Malaysia, Thailand, etc. Southeast off the coast from there you have the 18,000 islands of Indonesia (you may be surprised to learn that that plethora of islands is also home to over 250 million residents, making it the fourth-largest country in the world behind only China, India and the United States). Journey past the massive jungles of Borneo and Sumatra and you come to Java, seat of political power for the country and home to one of our least favourite cities of all-time (that’s right, Surabaya, we haven’t forgotten your horrific traffic, choking pollution or all-too-transparent conspiracy to keep us from escaping). Next to that, you finally find Bali, much smaller, but covered with volcanoes, ringed by beaches, and brimming with eager yoga enthusiasts angling for enlightenment and moderate weight loss. Further southeast yet you find even smaller Nusa Penida, a largely untouched island known for spectacular scuba diving in the surrounding waters and the promise of spotting extremely old women carrying large loads on their head while topless. Dwarfed even by Penida, just to the west, you’ll find Nusa Lembongan, quickly emerging as the go-to destination in the Balinese area for fans of the “it’s such and such 30 years ago” game, as well as the star of next week’s blog entry. Finally, we’re left with an even smaller island (we’re basically down to “miniscule” at this point), Nusa Ceningan, a tiny sliver of volcanic rock squeezed into the narrow gap between Penida and Lembongan like an unfortunate fanny pack crushed between two fat people hugging. 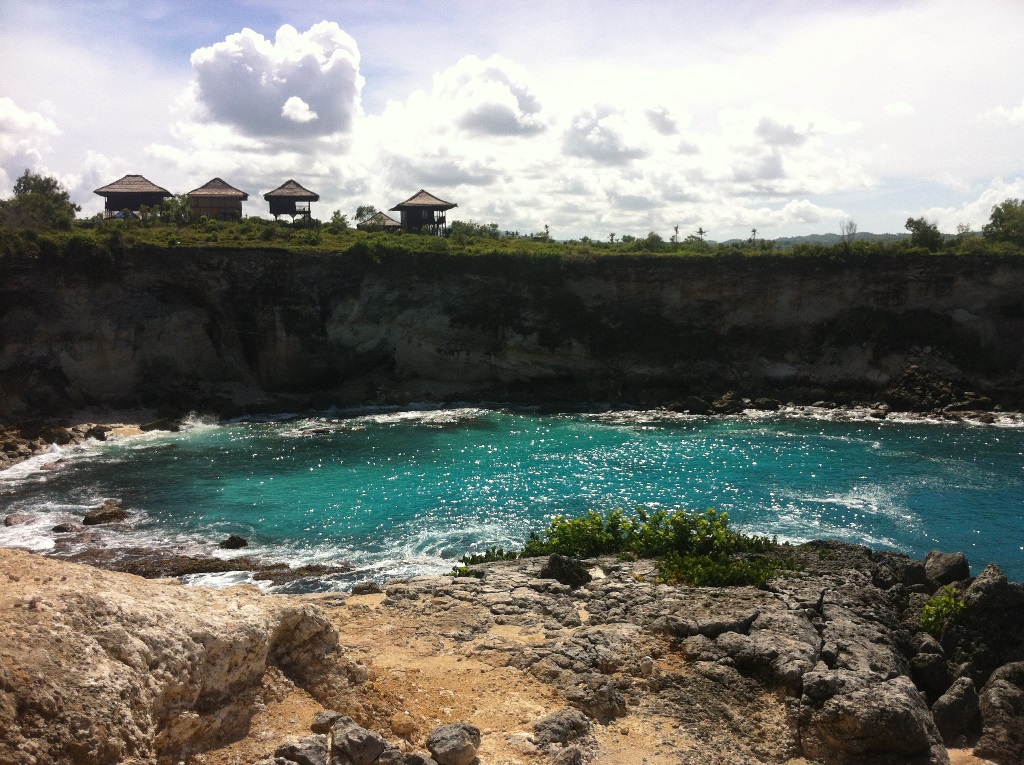 How to get to Nusa Ceningan

In fact, Ceningan is so small that it doesn’t even have a dock, per se, and our fast boat over from Padang Bai had to drop us off at a floating dock well off-shore, where we traded places with a departing Chinese tour group  to board a much smaller boat that took us another kilometre or so up the narrow channel between Ceningan and Lembongan, passing among the roughly staked out seaweed farms that remain a large part of the economy on these dry islands, but even this little schooner couldn’t quite get us all the way to land, cheerfully dropping us off in knee-high water and gesturing vaguely, apparently instructing us of the need to wade through the mangrove shallows for about 50 more metres before finally reaching dry land. And even then we were only on Lembongan, still across the tiny yellow suspension bridge from Ceningan. I think this is what guidebooks are talking about when they use terms like “undeveloped”, “lacking infrastructure” or “wet”. There, however, things got a bit simpler as we were met by two representatives of “Da Fish Guesthouse, Restaurant and Really Cool Tree Fort”, and by representatives I mean two young guys with scooters to take us across the tiny bridge (only wide enough for one moped at a time, oncoming riders and walkers need to wait at the other end for their turn) to Ceningan, and then all the way down to the very southern-most point of the island,  the entire trip taking somewhere between 3.5 and 4 minutes. As I’ve mentioned, Ceningan is really small.

The Da Fish’s cozy little set of bungalows is run by an unbelievably nice extended family, and yes, even they use the clearly redundant “the” in front of the name, even on the permanent sign out front and everything. It features a small infinity pool (we’ve come to learn that you can’t in good conscience call yourself a trendy Balinese, or Balinese-area, hotel and not have a small infinity pool), partial views out over the ocean, views which can be improved significantly by climbing the awkwardly-constructed ladder/stairs up to the custom treehouse lookout, a favourite spot to enjoy a beer while watching the sunset, followed by the adrenalin rush of somehow managing to climb back down unharmed. 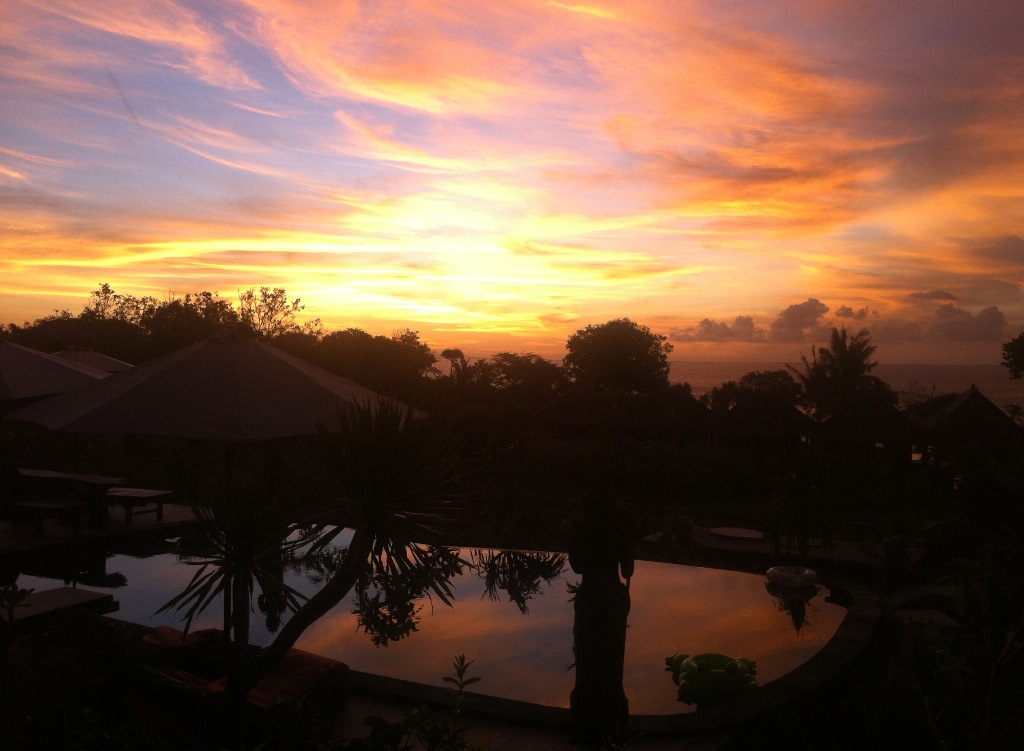 Da Fish is set on a somewhat busy corner, although on Ceningan “busy” means a scooter goes by every half-hour or so, except between 10 and 2 when this hectic traffic is practically doubled by curious tourists from Lembongan exploring on their rented scooters, almost all displaying the exact same look of intense concentration that belies their lack of confidence, while still mixing in a broad smile every few seconds to remind everyone, as well as themselves, just how much of a lark the whole experience is. Then they inevitably pause at our corner, it being virtually the first directional decision they have had to make since breathlessly escaping the narrow bridge unscathed, scrutinizing the two diverging dirt paths as though one of them leads to a lecherous cockfighting promoter lurking in the bushes with impure designs on scantily-clad tourists who have yet to master the art of the high-speed moped escape. When, in reality, if they choose the incorrect fork they will just hit a dead end after a hundred metres and have to backtrack a bit.

In all, we spent 4 nights on Ceningan, filling our time gaping at colourful sunsets, eating fish prepared in a variety of ways, wandering on foot to see the spectacular Blue Lagoon and many other rugged cliffs and bays, and even rented a scooter for a day ($7 for the whole day, “including petrol”, Sentana informed us like it was obvious nobody would ever pay that much if gas wasn’t included) which allowed us to journey across the channel to Lembongan, traverse the entirety of this larger island while stopping for photos occasionally, take a long break to enjoy a beer and the view from Mangrove Point, then cross back over to Ceningan, also traversing the entirety of that island, twice in fact, not to mention stop for lunch at Ceningan Cliffs overlooking Nusa Penida to the east, then finally return to our hotel, pleasingly exhausted by our long journey which, all told, took around 3 hours. Another big day in the books. 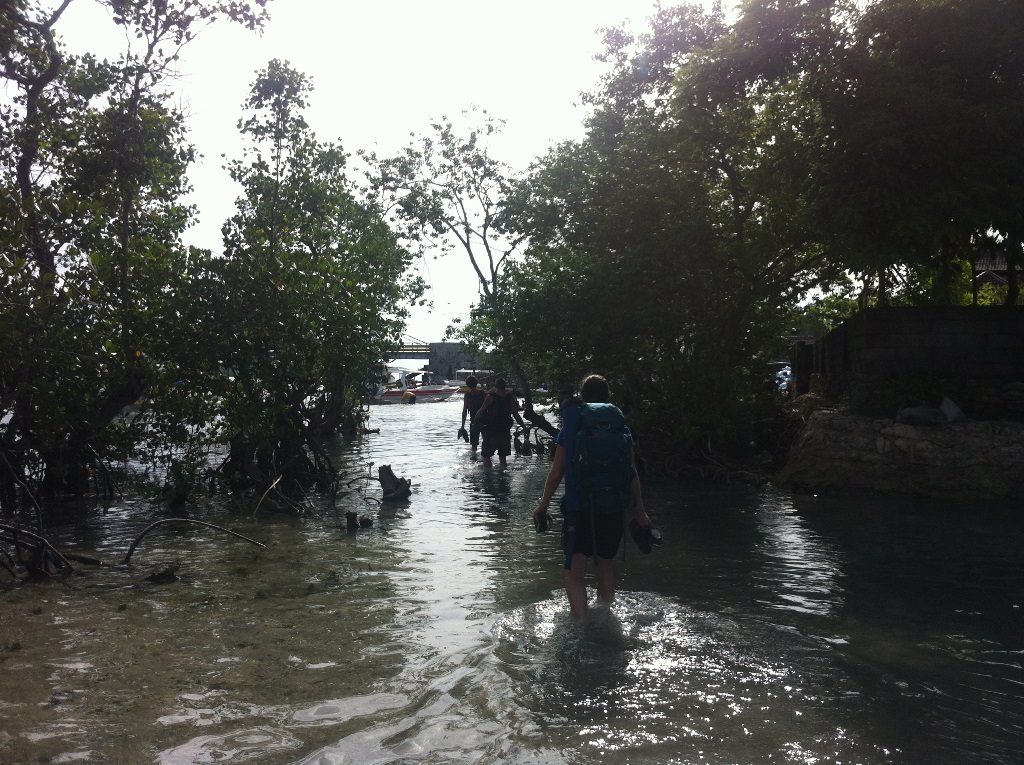 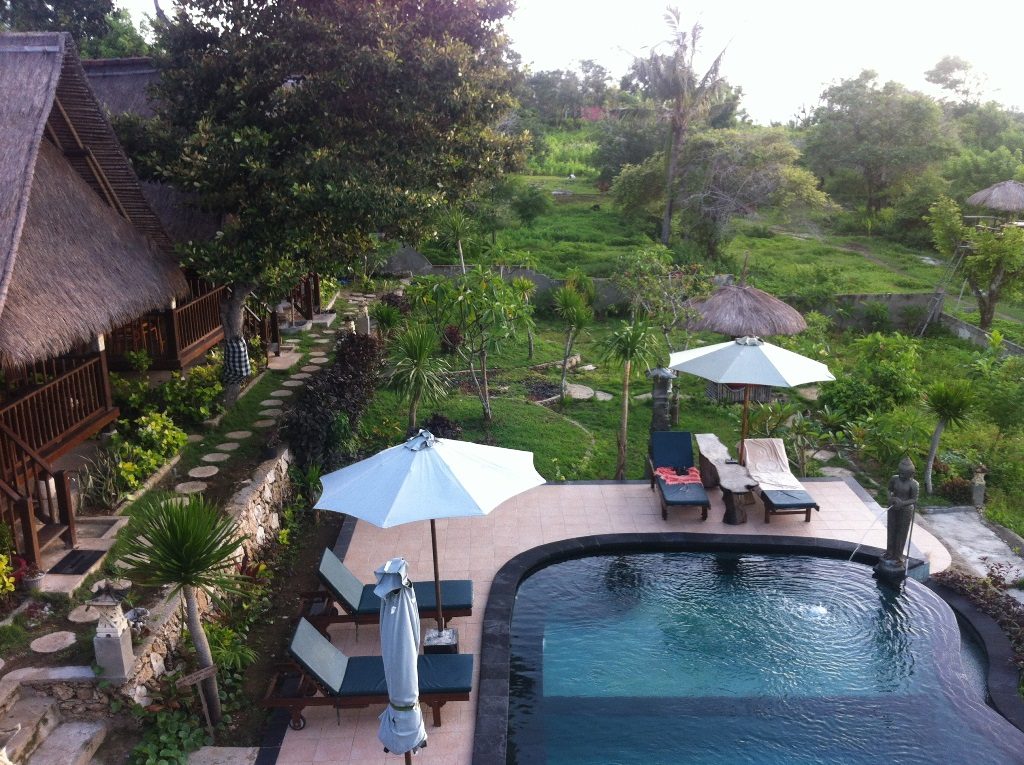 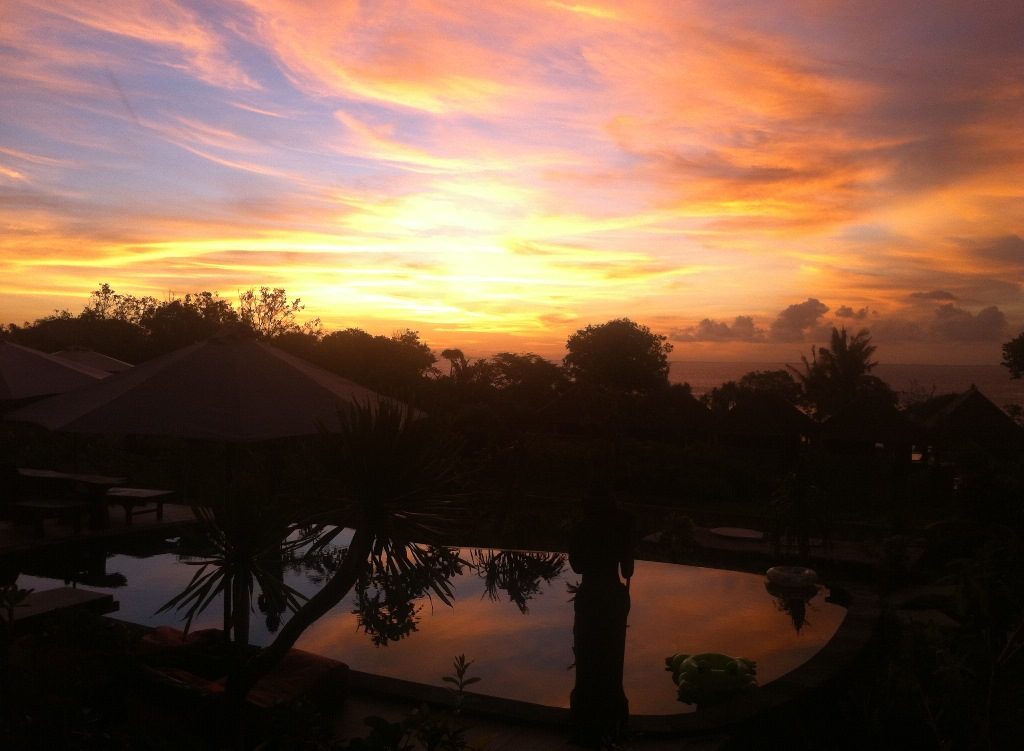 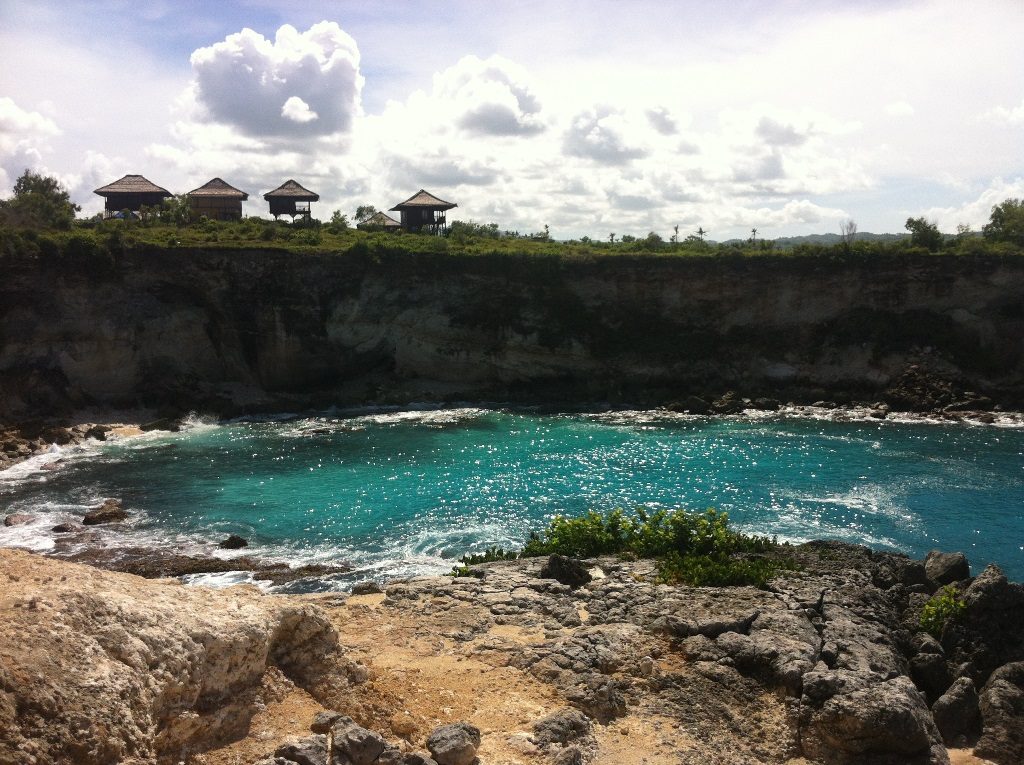 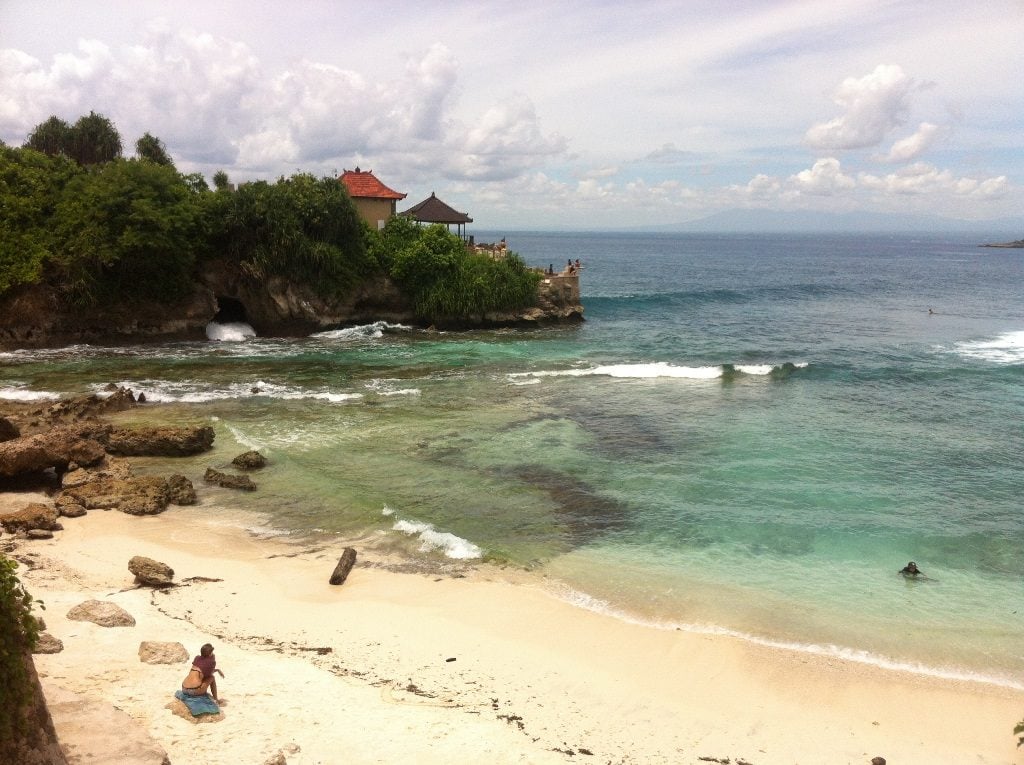 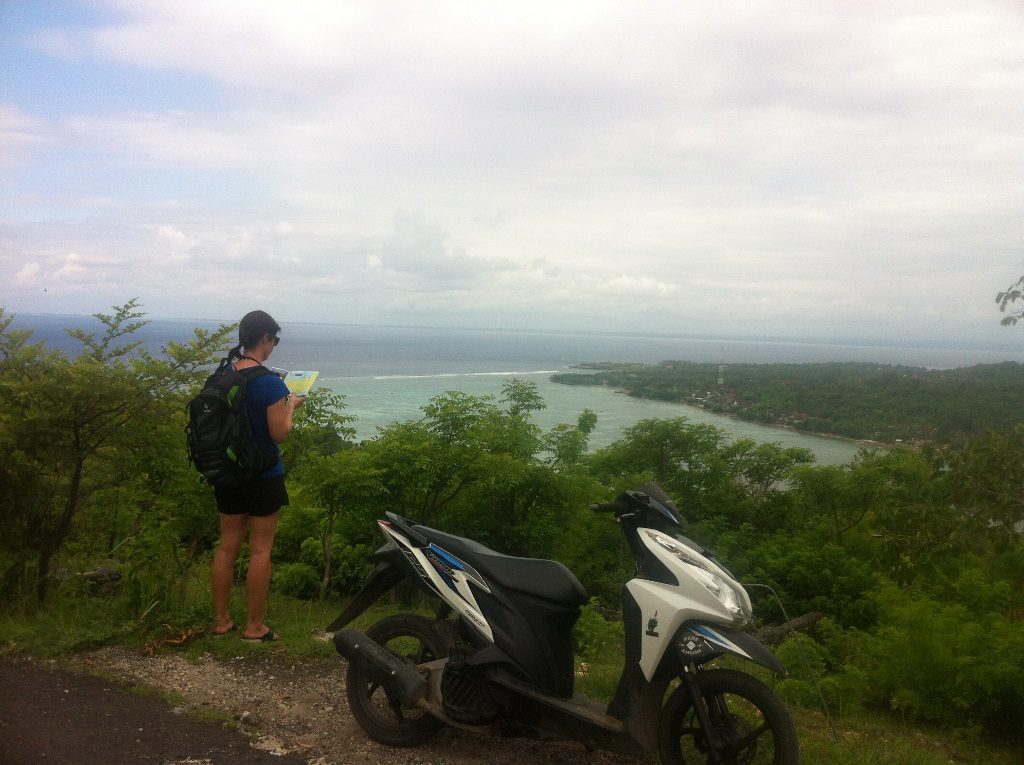 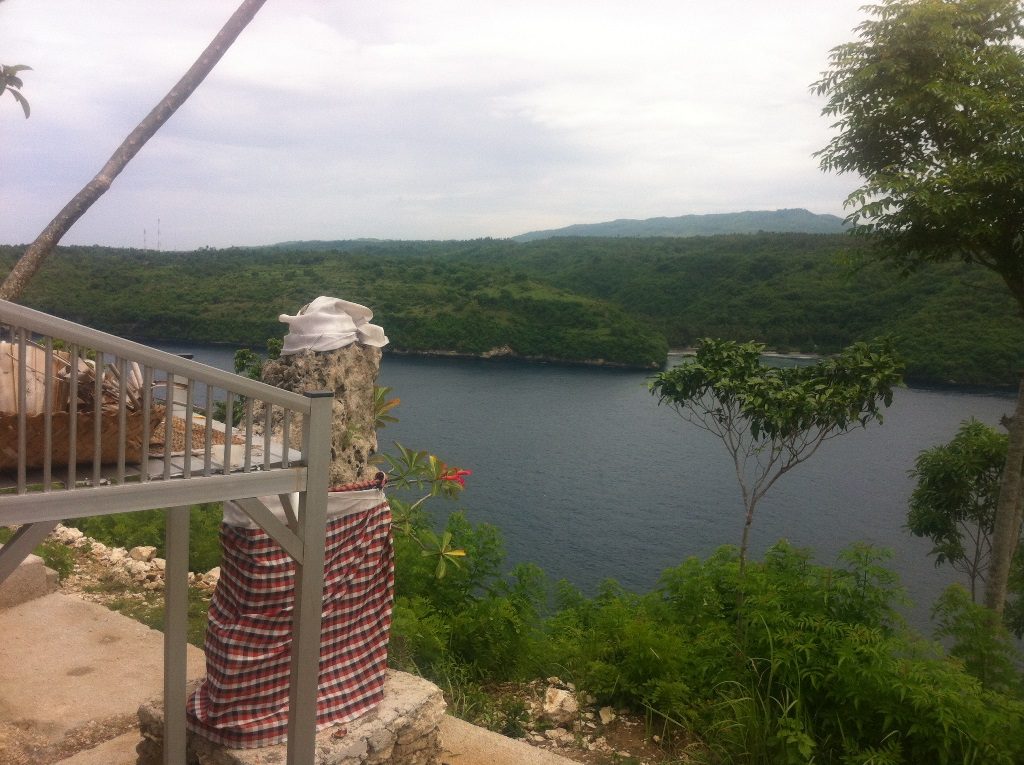 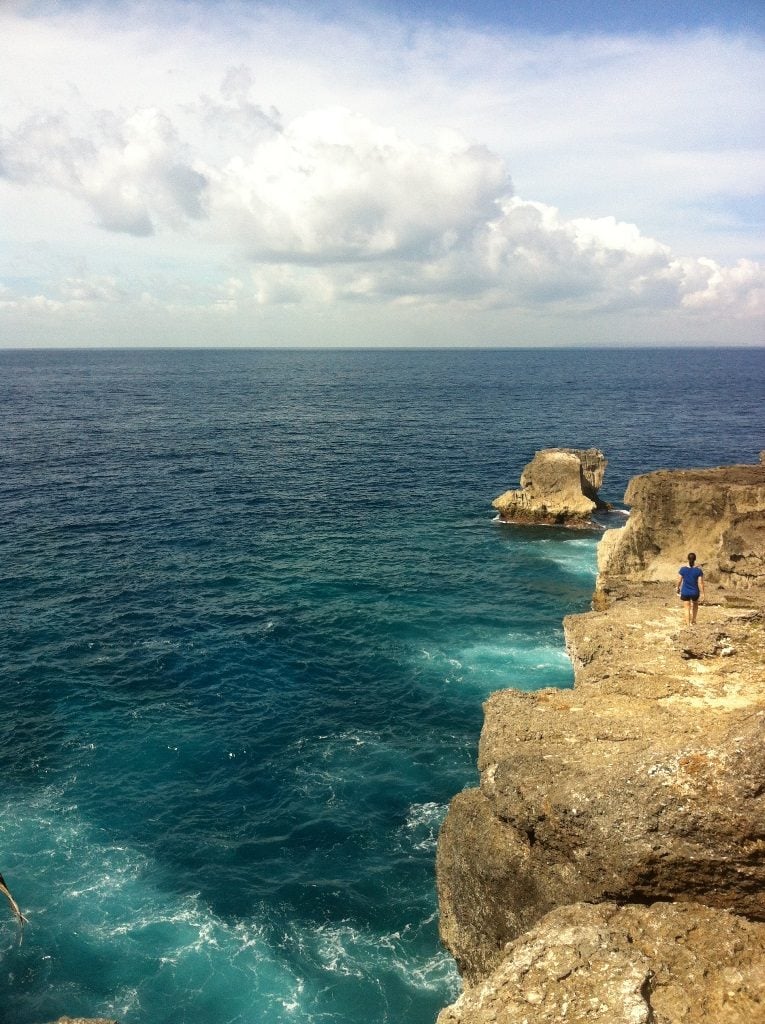 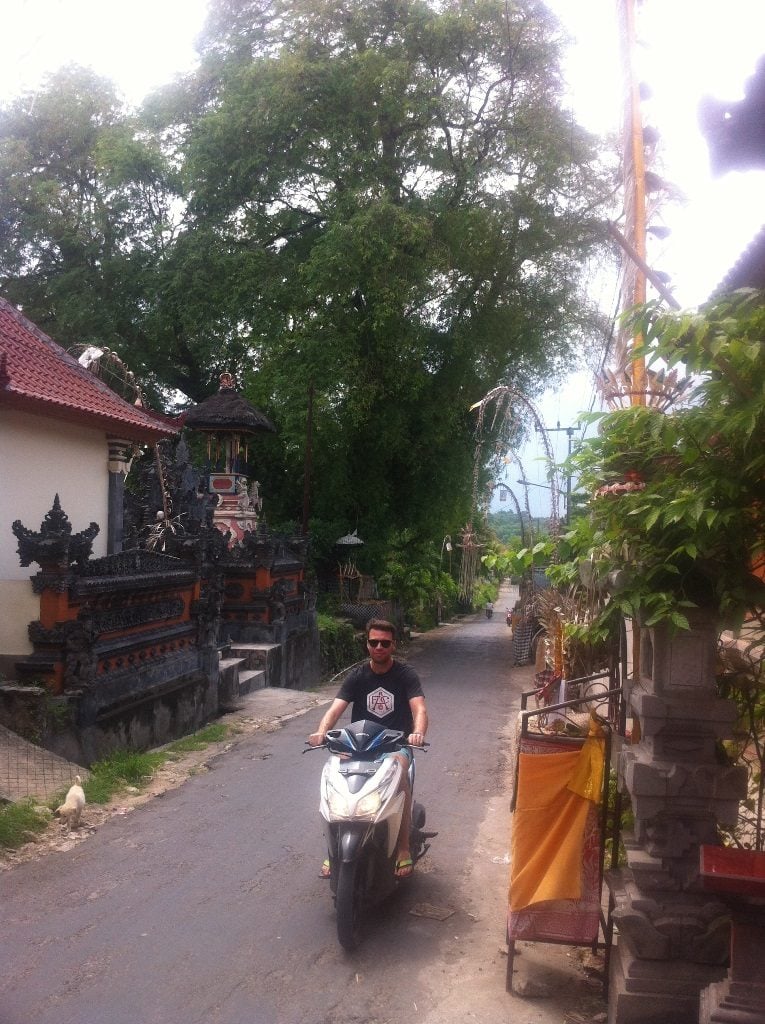 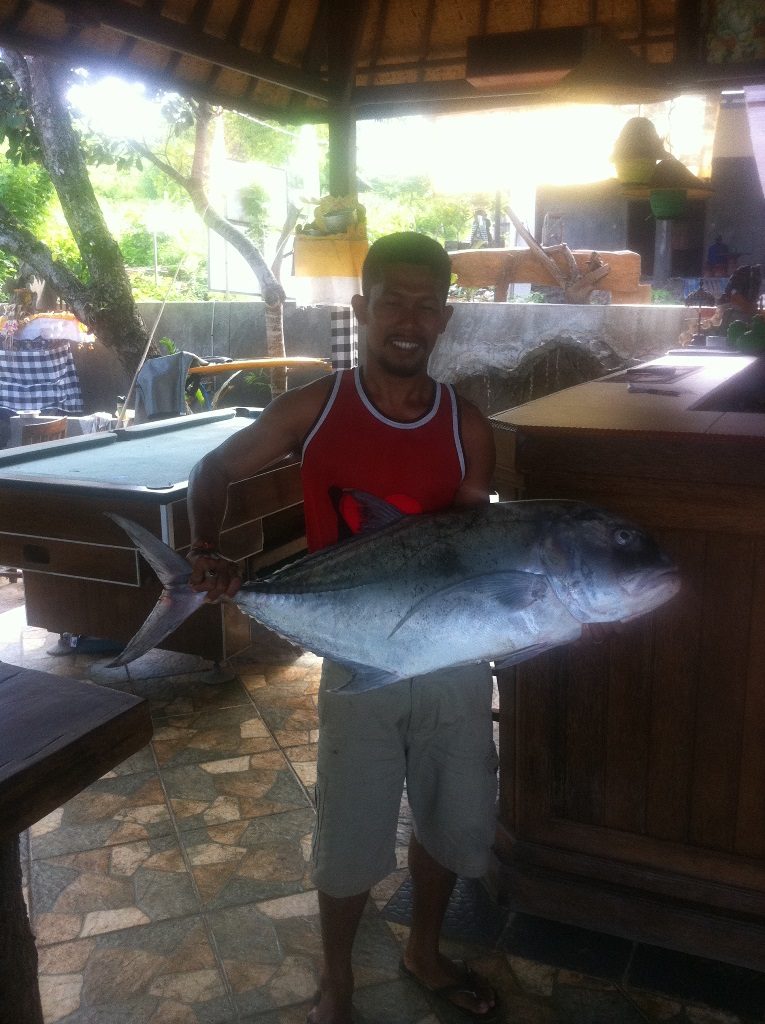