Although we started by taking an entire day to make our way from Lake Atitlan to Xela, opting to go the piecemeal public transport route, leading to a journey that went a little something like this:

Tuk tuk, pickup truck, minivan, chicken bus, second chicken bus, taxi. All of which still only took a total of 2 1/2 hours, even including a bit of a wait for a bus on the highway, meaning we arrived right on time for a sublime lunch of quarter-pounders, greasy fries and processed sundaes at Rotten Ronnie’s (my mom just used this long-forgotten term from our childhood and I am now bound and determined to bring it back into circulation). After just the single night in Xela, the following morning we travelled all the way to San Cristóbal de las Casas via a long, slow, painful, annoying, interminable, hot, tiring, confusing shuttle trip. Or, in other words, just a normal Guatemalan shuttle trip. The van was packed, the food options limited to gas station fare, and the roads barely deserving of the name, but, hey, what else would we have done with those 10 1/2 hours anyway? 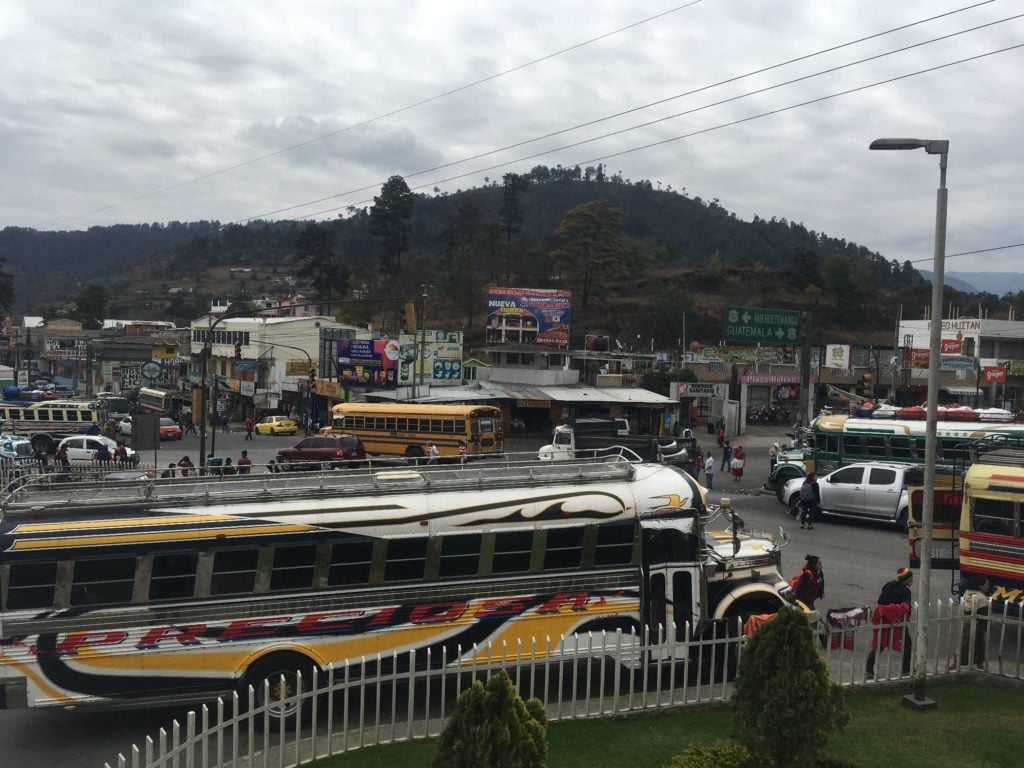 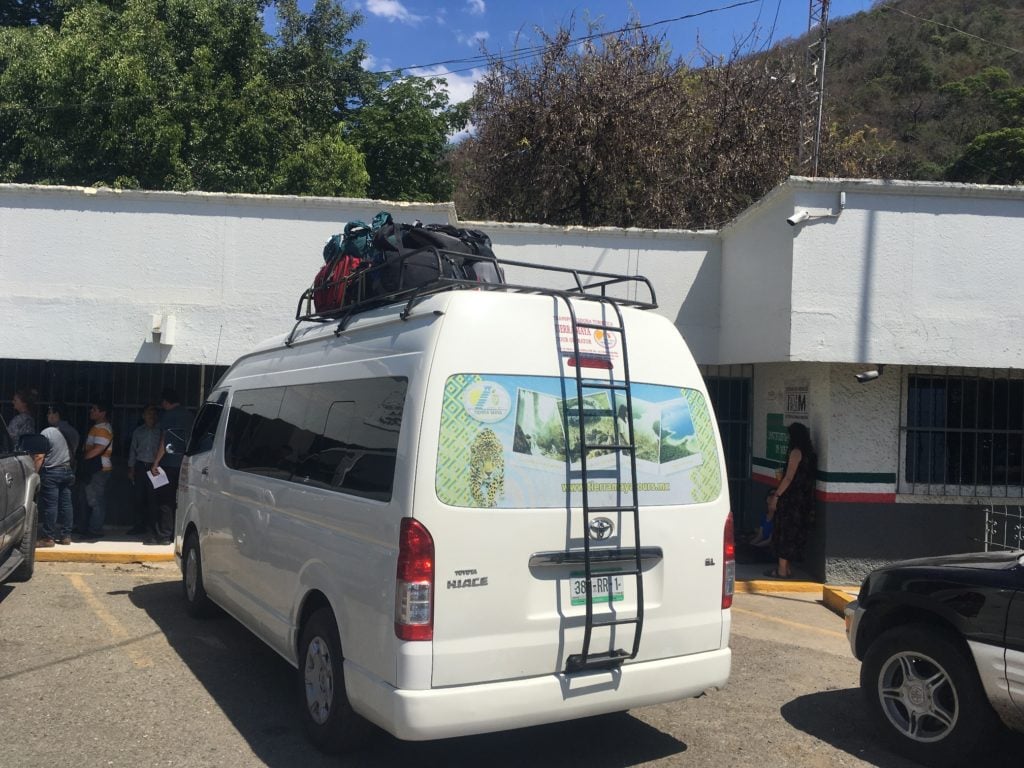 So, on to San Cristóbal de las Casas. Saint Christopher of the Houses is a nice little city, full of colourful old buildings, tree-lined squares, unique churches and, normally, gawking foreign tourists. However, having unwittingly arrived right at the start of Feria week, celebrating the city’s 490th anniversary, we stumbled directly into a tumultuous scene of ambling crowds, impromptu markets, street bands and random celebrations, with the tourist crowds made up almost entirely of Mexicans for a change. Quite a different feel, and surely a lot more fireworks. It was a wild, festive week, and felt like a completely different place the following Monday when all the revellers started straggling off to, well, wherever it is they all came from. Other places, I suppose. 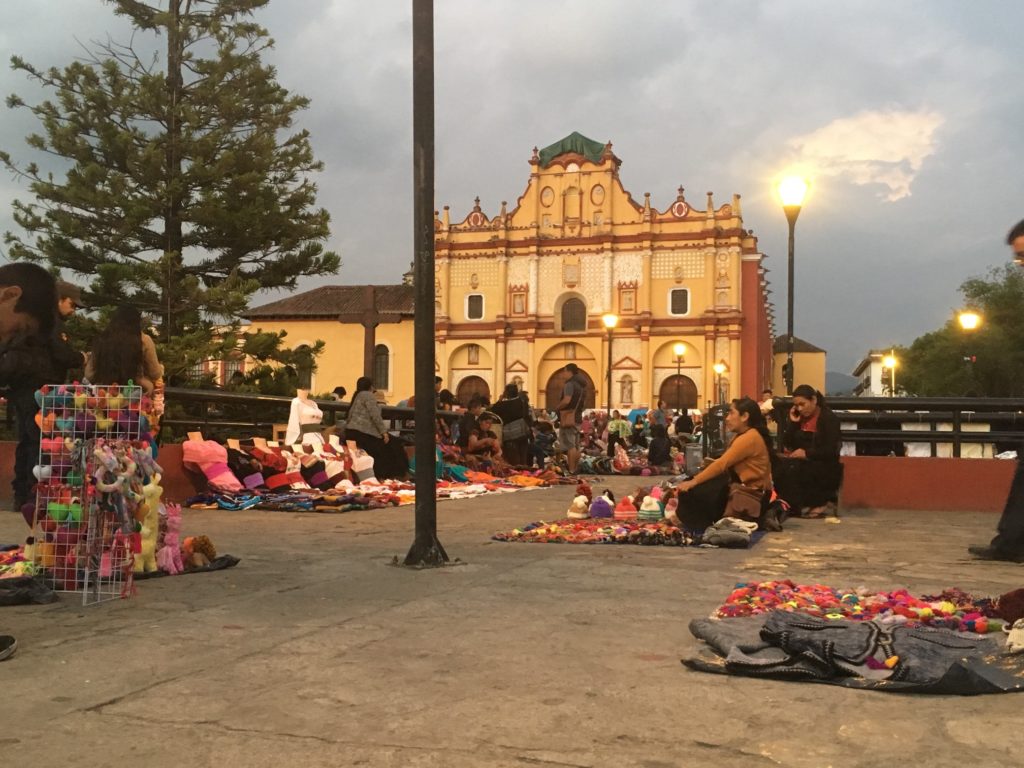 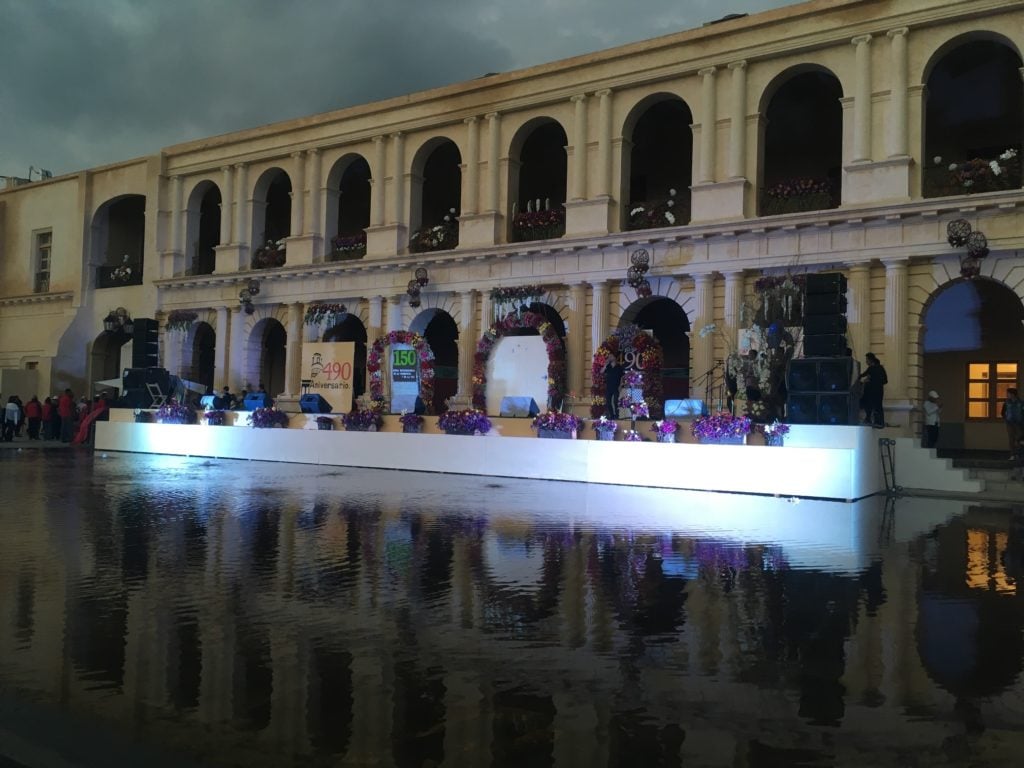 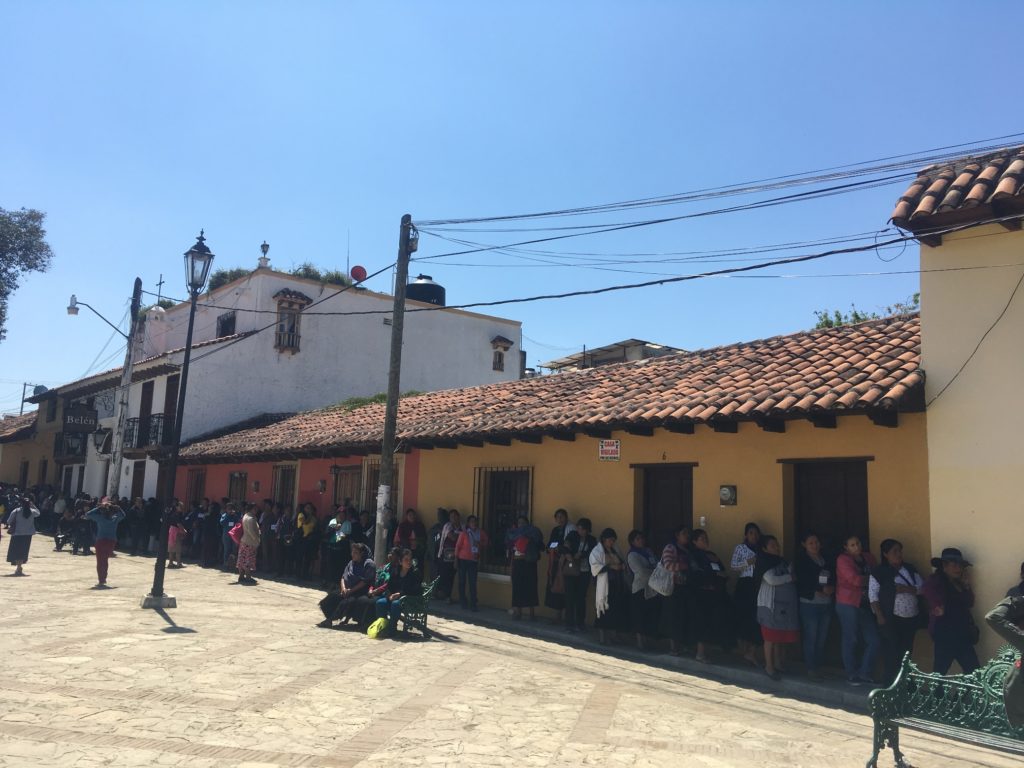 When deciding where we would spend April this year (anticipating the traditional “90 days is plenty for the likes of you” ejection from Guatemala), we weighed a number of different options, almost all in Mexico due to proximity and a shared love of tacos el pastor. Mazatlán, Guanajato and San Miguel de Allende were all worthy finalists, but ultimately we chose San Cristóbal for three reasons:

1) Its cool, altitude-tempered climate. At 2,100 metres above sea level the weather here is almost perfect in April when every location in Latin America below 1,000 metres swelters under the oppressive heat of a brutal combination of the start of summer and tail end of dry season.

2) Its manageable size – all available amenities but still fully walkable. Walkable, at least as long as you can acclimate to spending hours navigating narrow, uneven, and strangely tall, “sidewalks”. 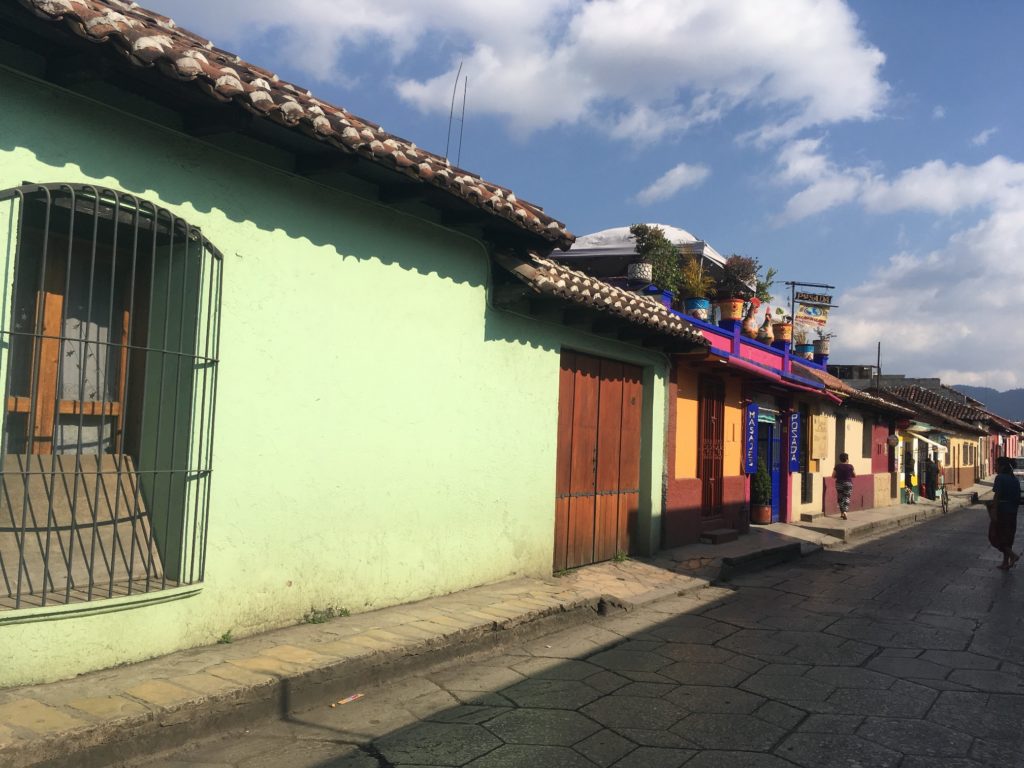 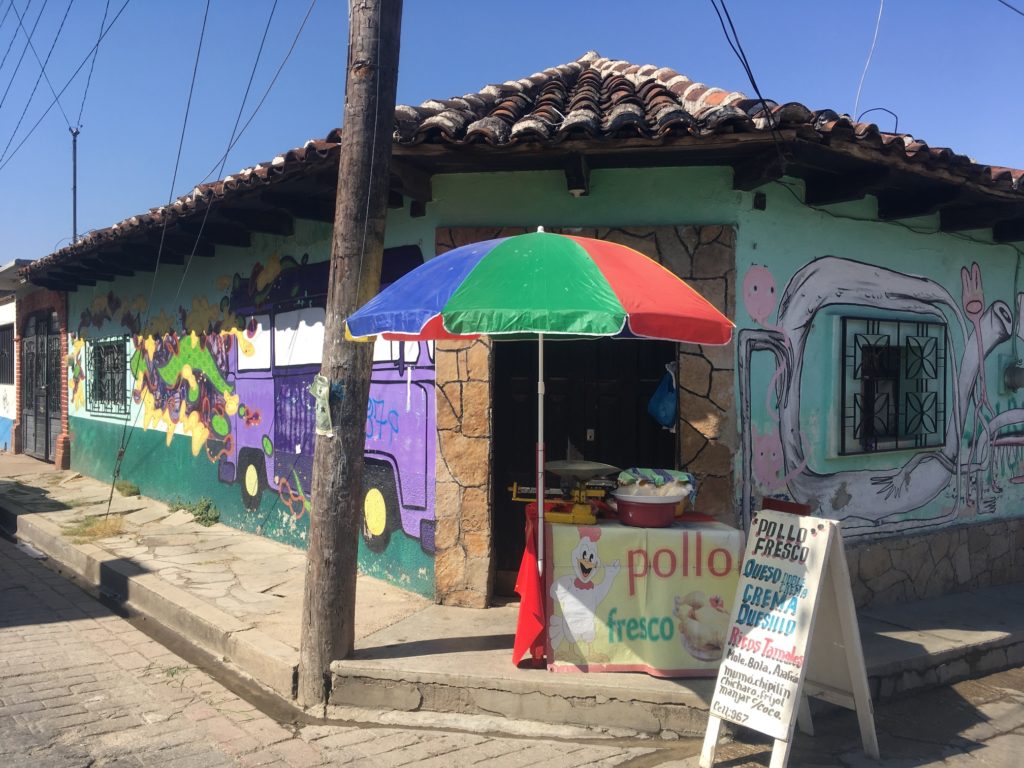 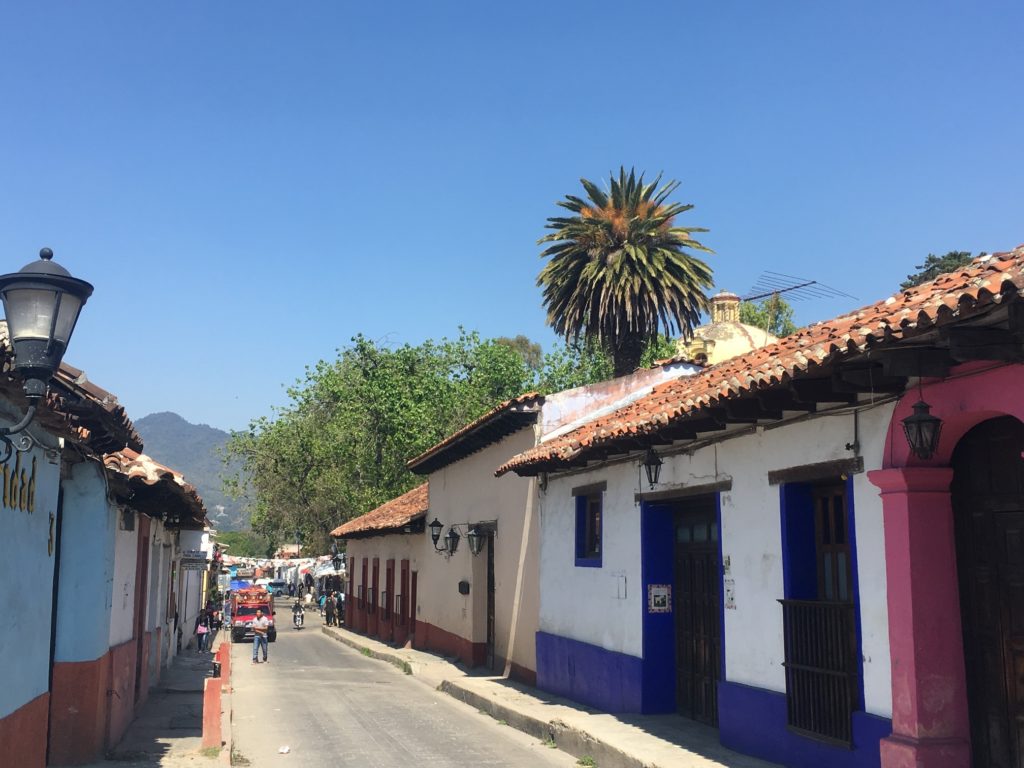 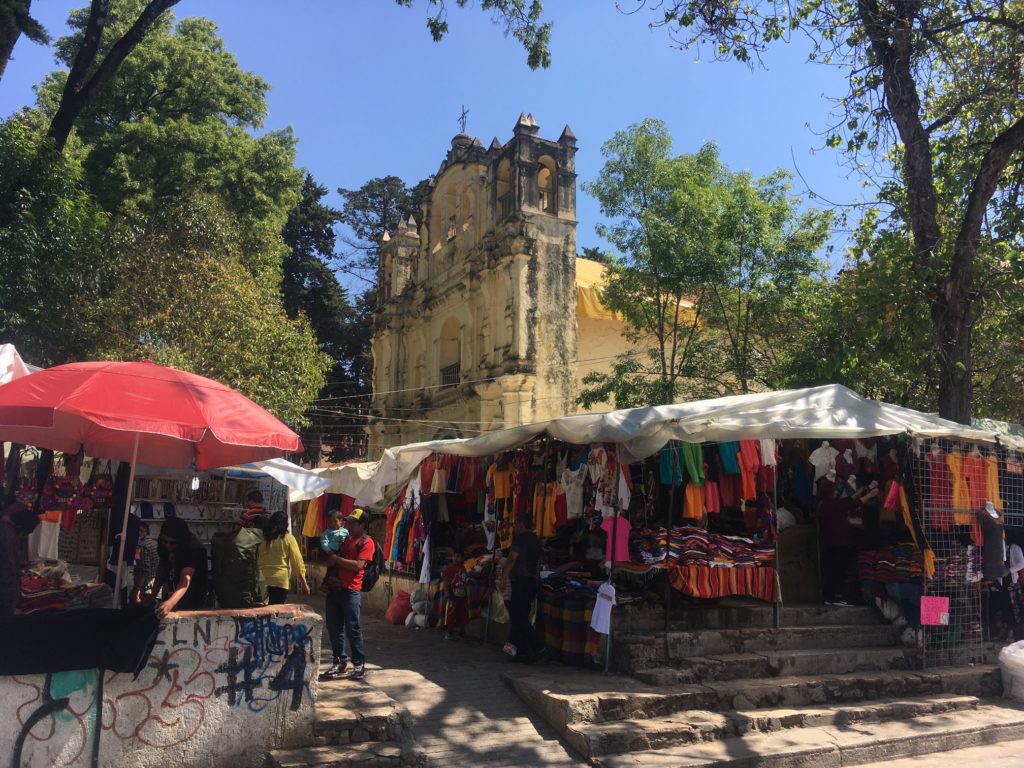 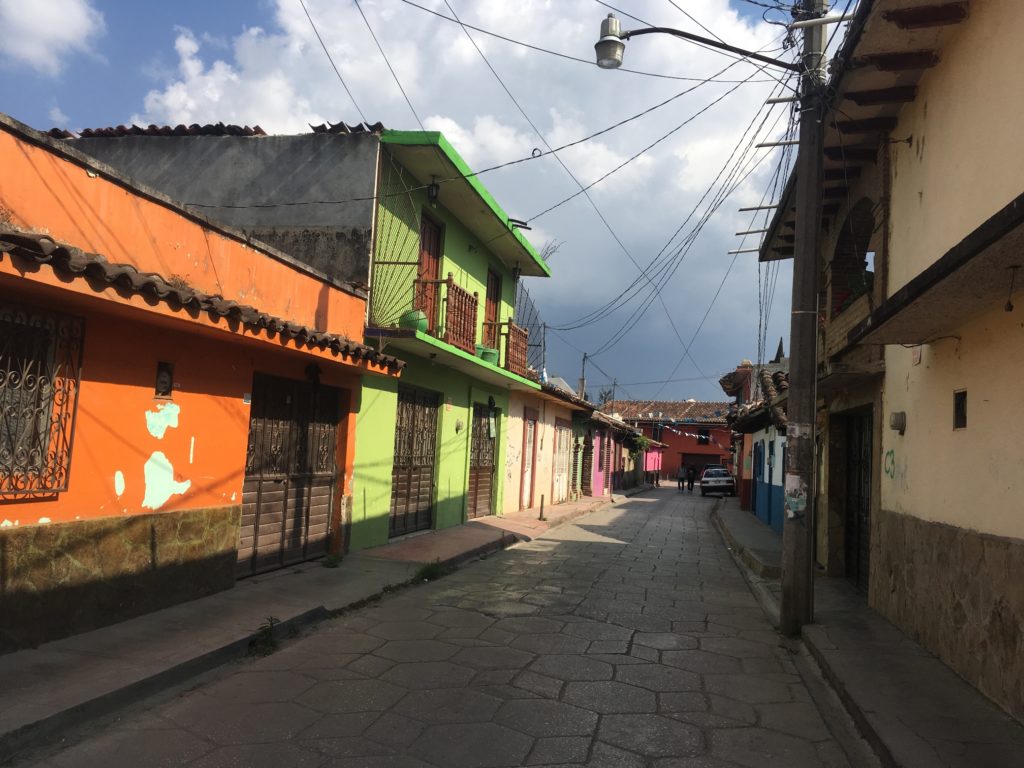 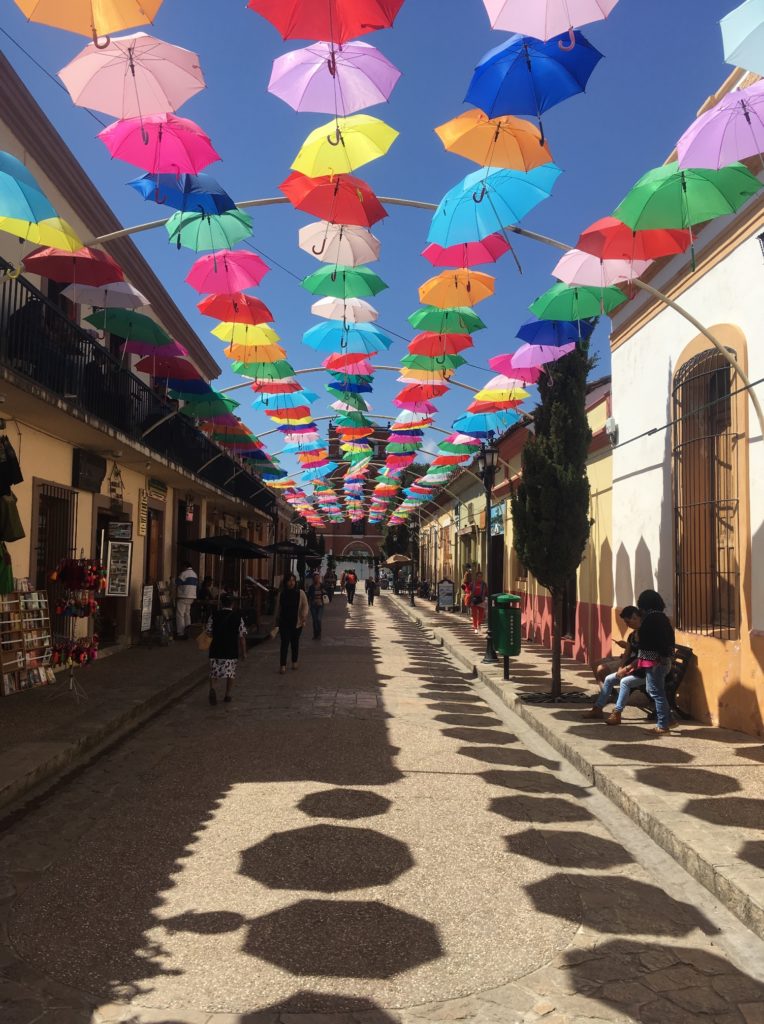 3) We discovered a really sweet deal on a nice apartment just outside the busiest tourist area. Its almost absurd monthly rate ($C23/night) grabbed us initially, but even after we lost that unexpected benefit (thanks to Julie reaching the ripe old age of 40 and deciding she would prefer to drown her sorrows somewhere quiet, peaceful, and, obviously, a place where whatever happens there stays there – hence, Las Vegas), it was still hard to complain about $C35/night. Two levels, two couches, and a TV with Direct TV satellite. There is a fireplace, which we only used once since this is about as warm as it gets around here. Which still isn’t warm exactly, bouncing between 8 at night and 20 during the day, but doesn’t necessarily warrant starting a fire. Besides, where does a person find newspaper to start a fire with these days? The upper level has a skylight above the couch, perfect for “basking”, not to mention watching 4 straight days of the Masters while struggling with some minor intestinal distress. Thanks to our travels, this was the first time I’ve watched the Masters in years, although I’ve spent many, many days wondering what will transpire on my next visit to the toilet, so that wasn’t really new. Cheering for Rickie Fowler was, though.

There was the small issue of the half-dozen guys industriously working away at building another hotel next door, eagerly hammering away every morning by no later than 7:15. And they liked to play crappy radio all day, which seems to be a fairly essential part of any construction project I’ve ever witnessed and, therefore, hard to hold against them. At least we had Sundays off, a feeling which they no doubt shared to an even greater extent.

Our place was cleaned daily by a gregarious and energetic little woman named Lucy who is quick to smile, even quicker to laugh, and who sweeps with an intense ferocity that makes me wonder if she is, in fact, sensibly killing all sorts of unwanted creatures which we had somehow missed, or maybe she saw some Olympic curling online and dreams of one day living the glamorous life of a semi-professional third. Our kitchen was adequate, at best, but there is no denying the fact it has exotically indecipherable Chinese characters on the cupboards. They probably just mean things like “plates”, or “old margarine containers you are saving for no particular reason”, but still. And there is even a grassy garden area with loungers, a BBQ and odd long-termers hanging out, making it sort of an urban version of Pasaj-Cap, just without the lake views and mandatory alcoholism. 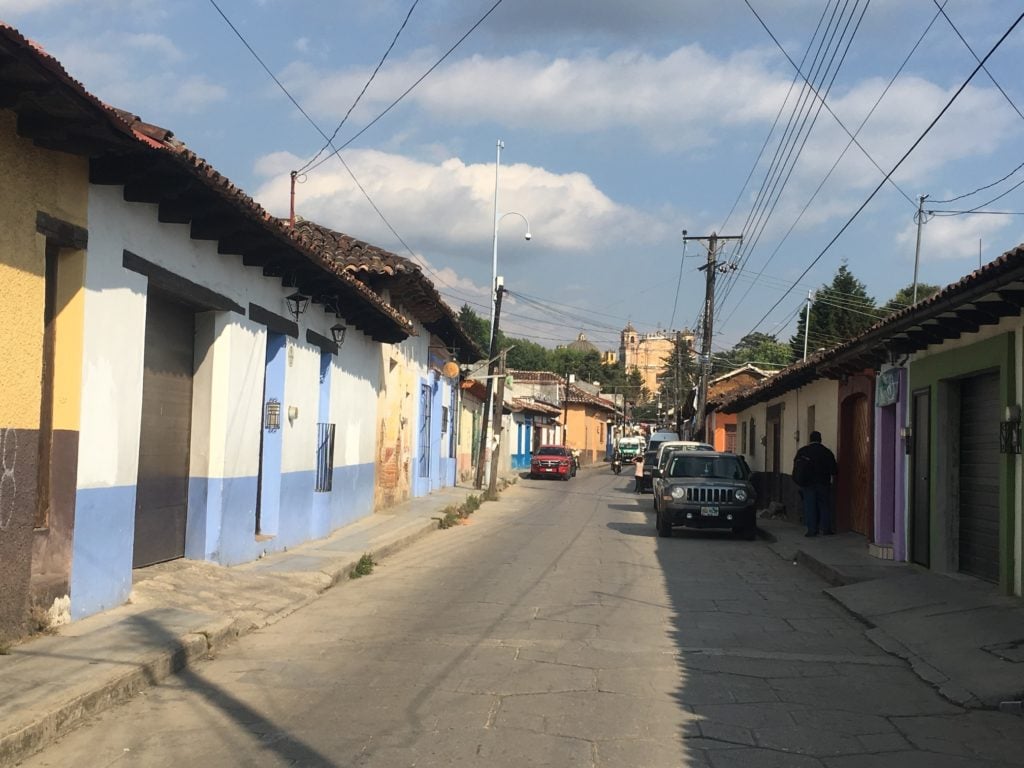 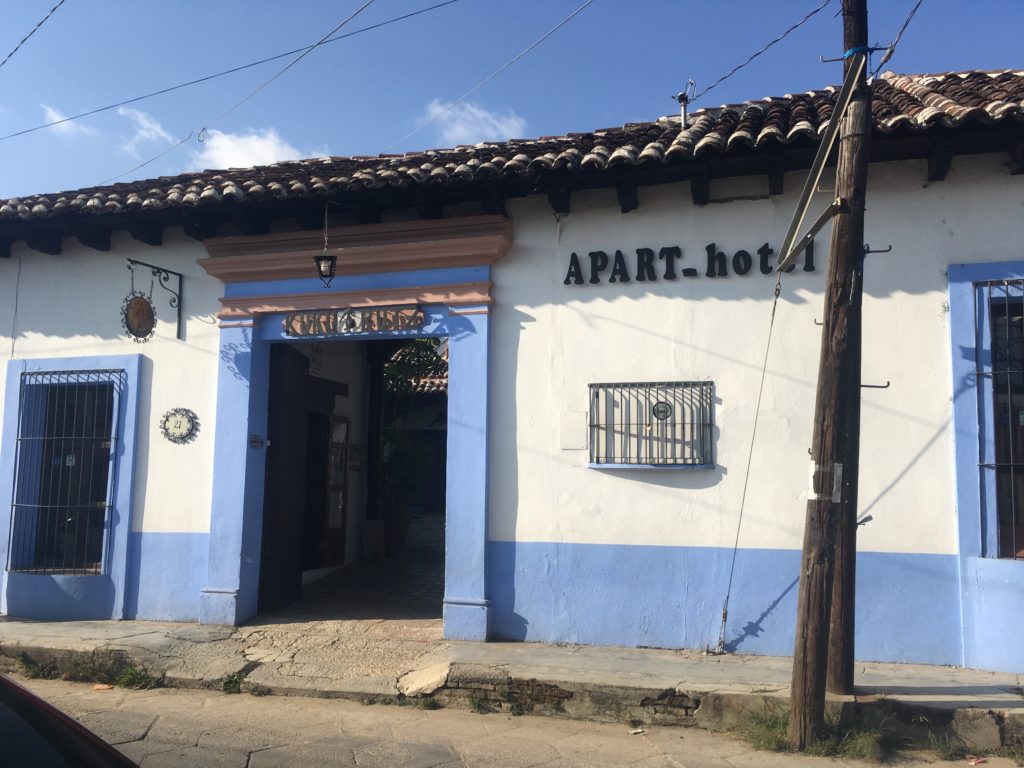 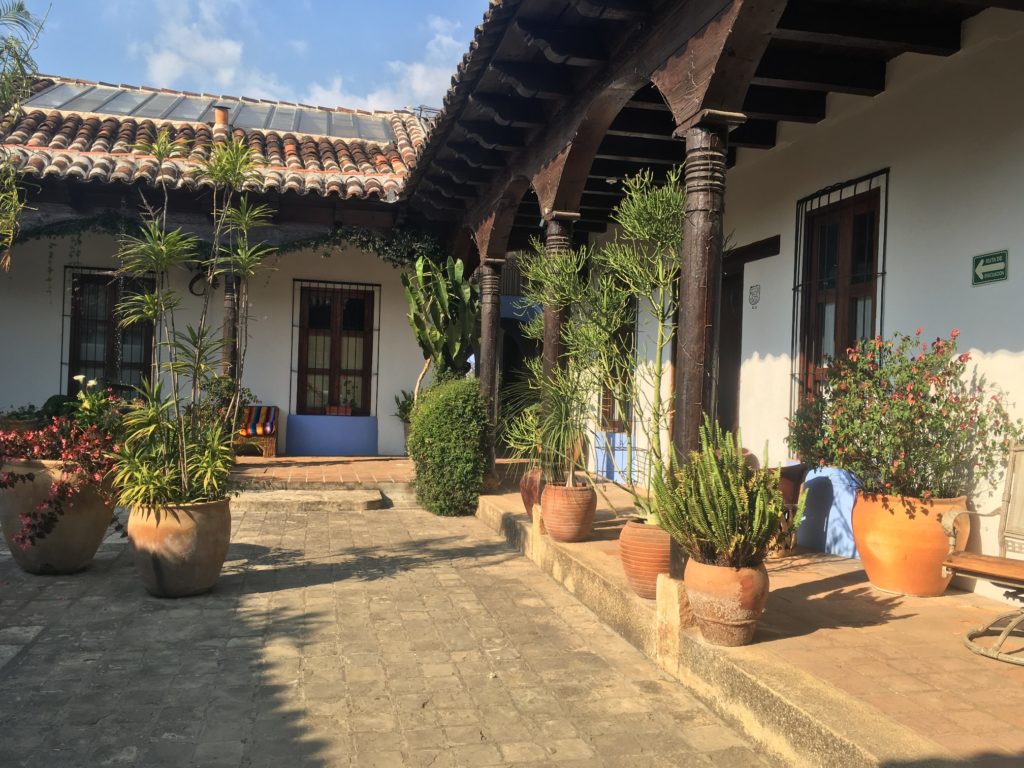 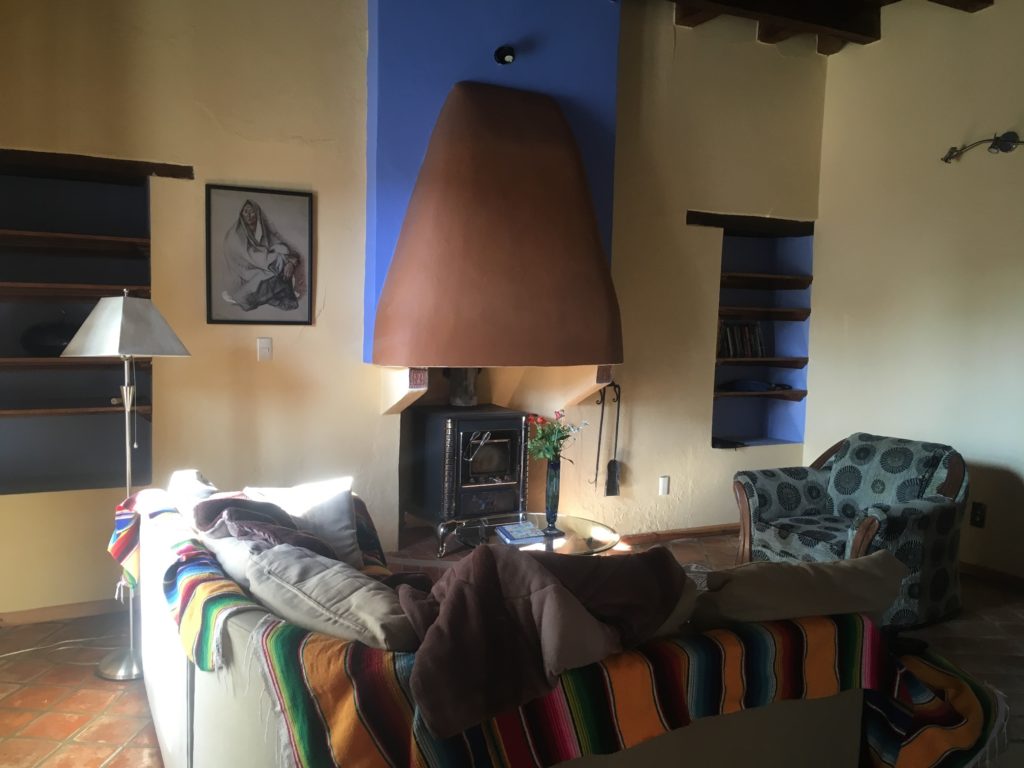 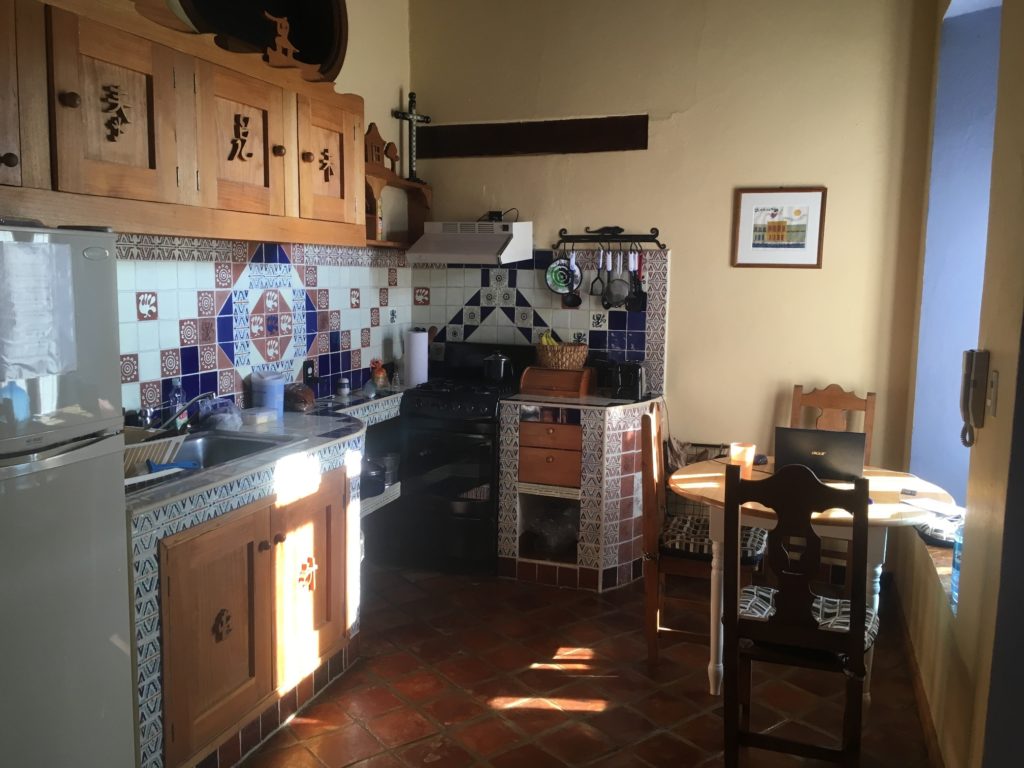 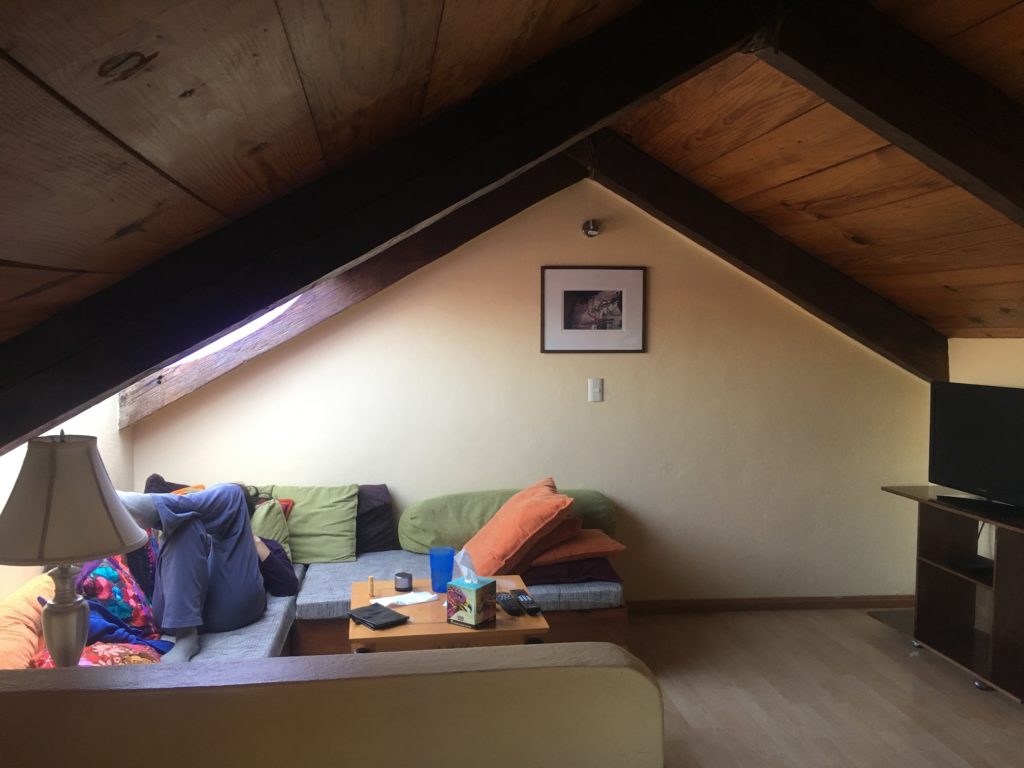 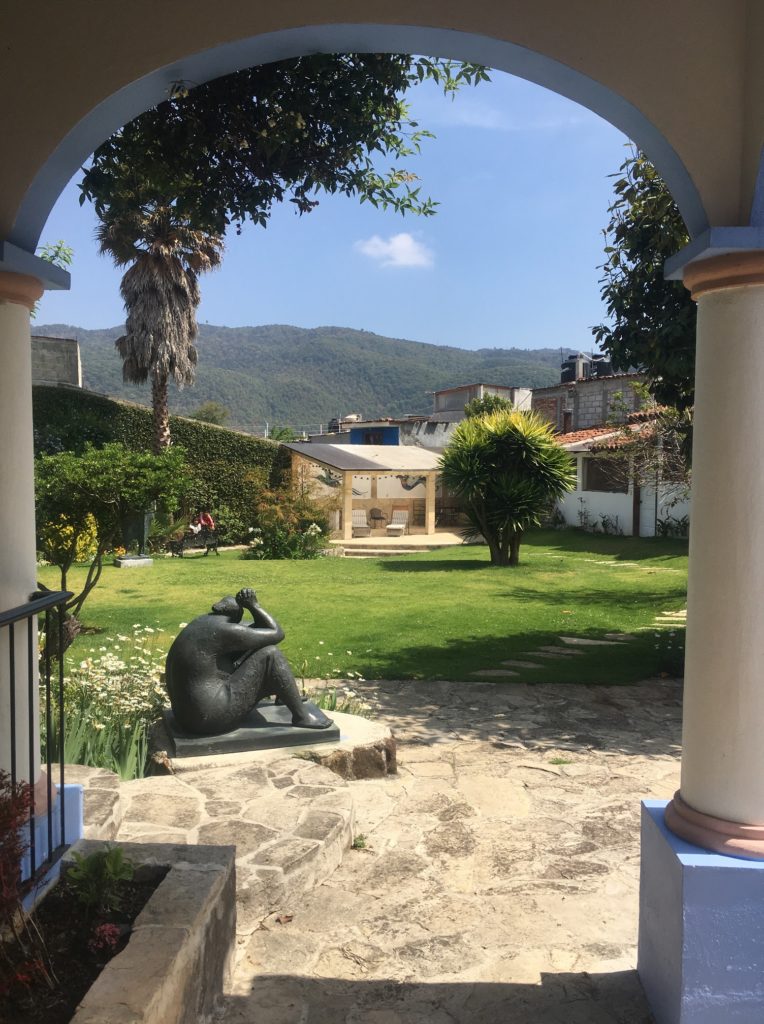 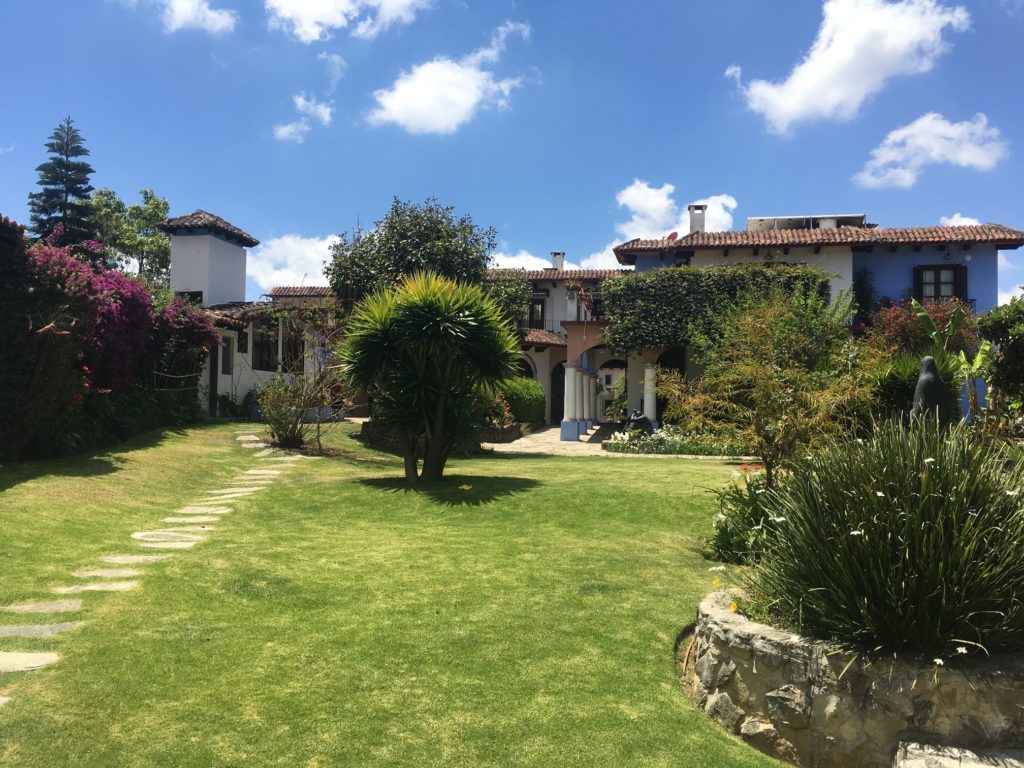 What to Do in San Cristobal de las Casas

The Orchid Farm, although I didn’t actually see any orchids (that cost 50 pesos more), just a nice forest path and a slippery, very dangerous cave with no supervision or warnings. Naturally, I climbed down as far as I could, and you’ll never guess what I found – more slippery rocks and a lot of moss. Oh, you did guess that? I suppose dank, treacherous caves are similar everywhere. 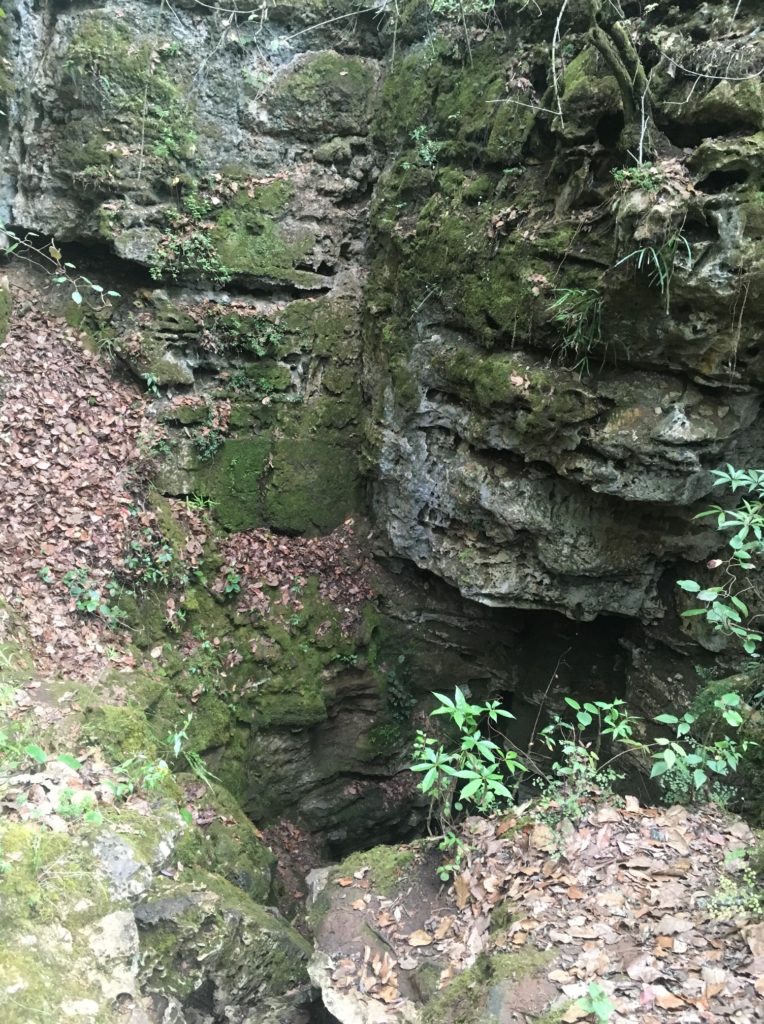 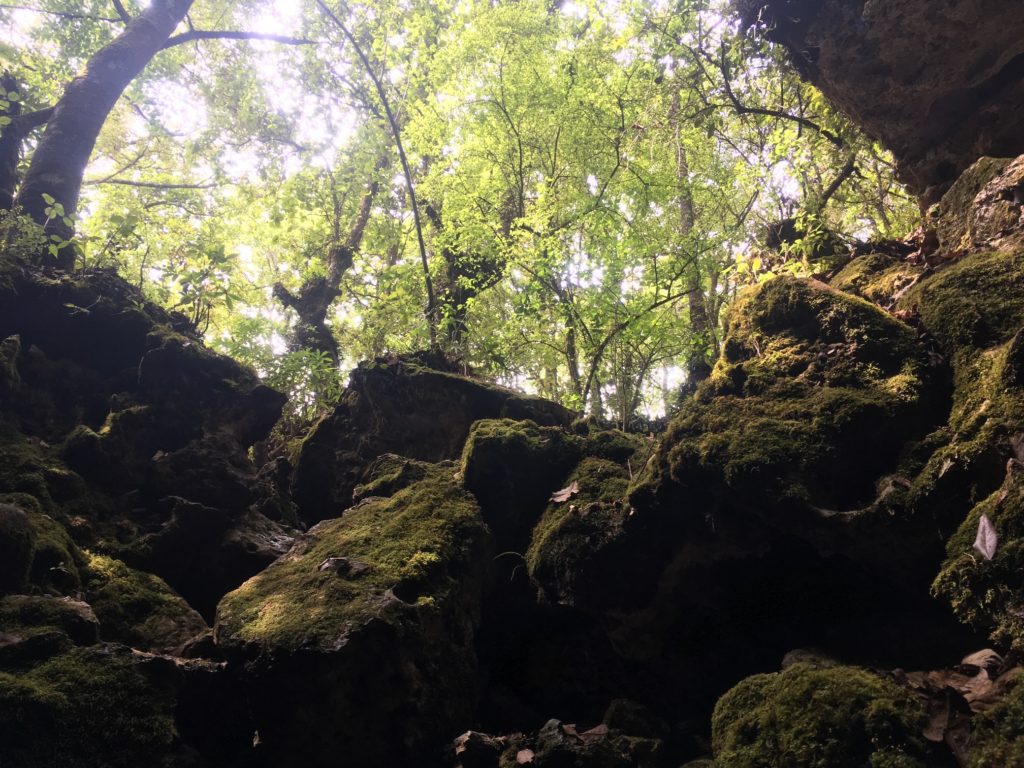 We climbed hills to a couple churches with views, except that trees block out most of the views in both cases, although the altitude (2,100 metres) makes the hills feel like more of an accomplishment than usual. In one of the churches an enterprising taxi company had cleverly written their name and number right on the pews. Practical, yes. Spiritual, maybe not. 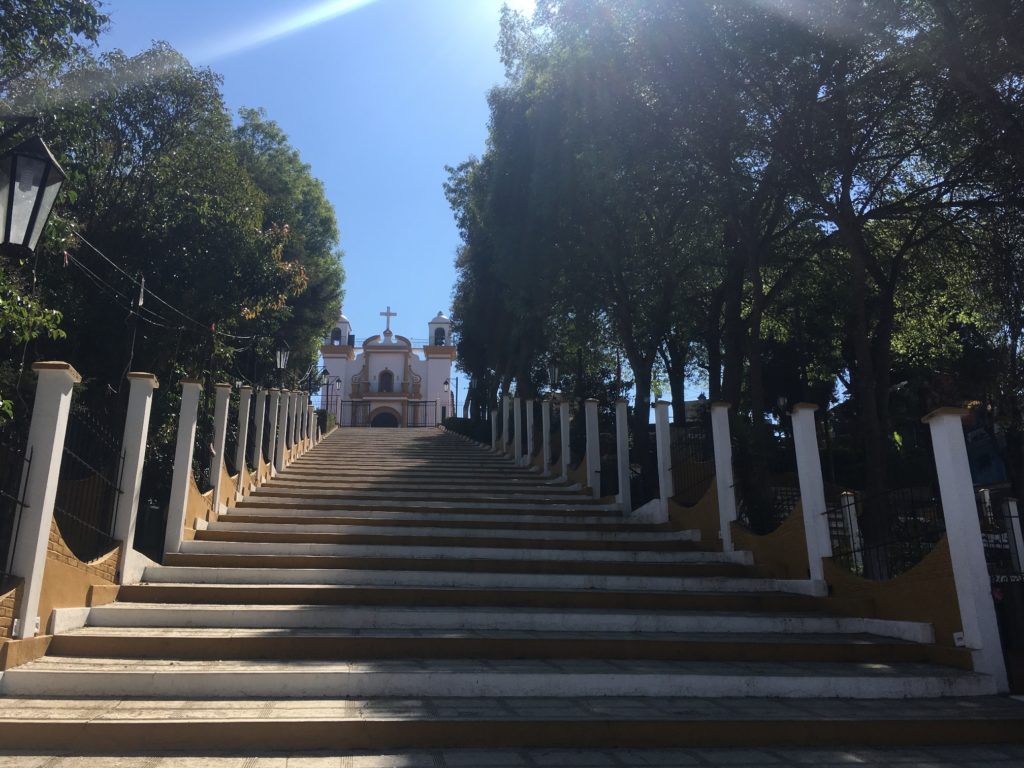 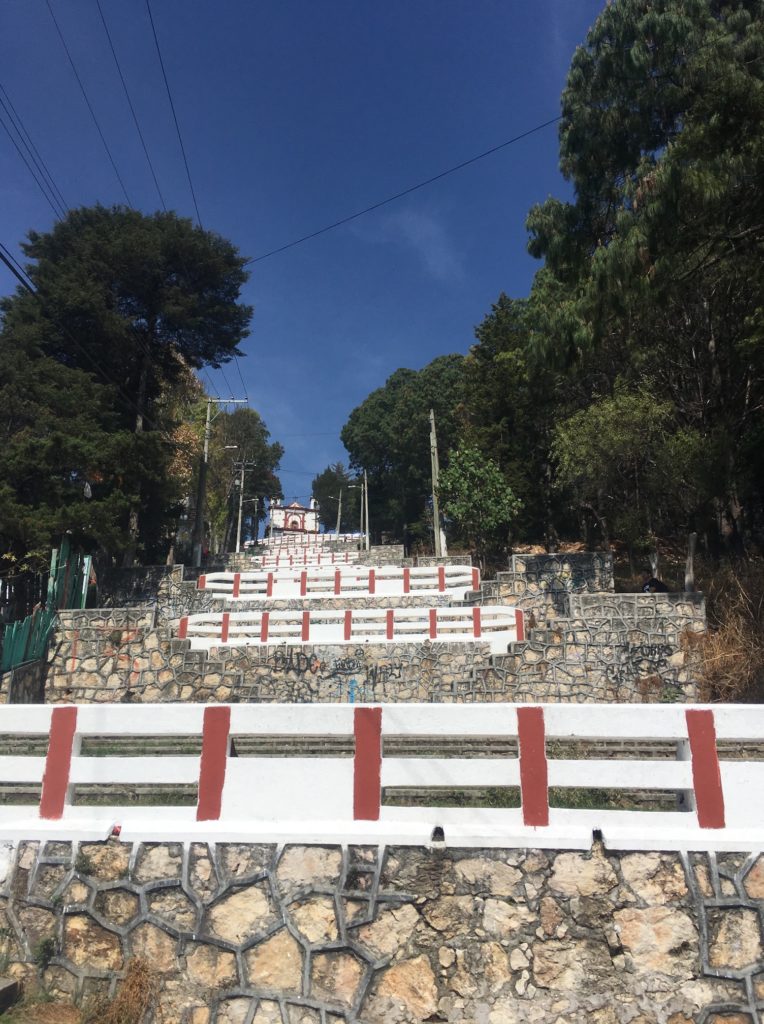 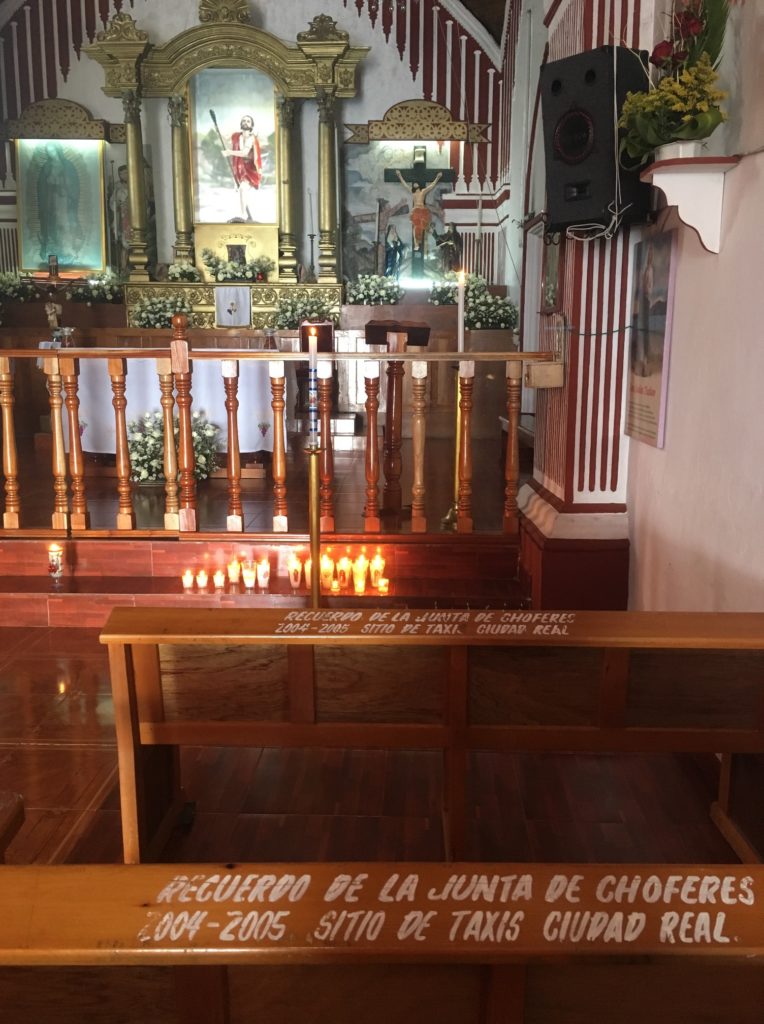 One thing that has really struck us here is just how cheap everything is. Guatemala is hardly an upscale destination, even on the relatively touristy lake, but this area of Mexico still has it beat in every department. We thought the San Pedro market was a deal of the century, but then we waded into the insanity of the San Cristobal “Old Market”, walking away with bananas for 5 cents each, 5 huge mangoes for $1.40, a bag of avocados for $0.70, and even two new umbrellas for just $6 in total. Although, judging by the all the loosely tangled threads I needed to rip and cut just to get it to open, there is a chance we got exactly what we paid for in that transaction.

Same-day laundry, however – washed, dried and folded for $0.70/kg, now that is something to believe in. And that was the expensive place. A large bag of clothes done up right for $C2, and now I find my long-awaited reunion with our washer and dryer back home basically ruined. They just sit there and let me do all the work, and still probably cost more than that in water and electricity. 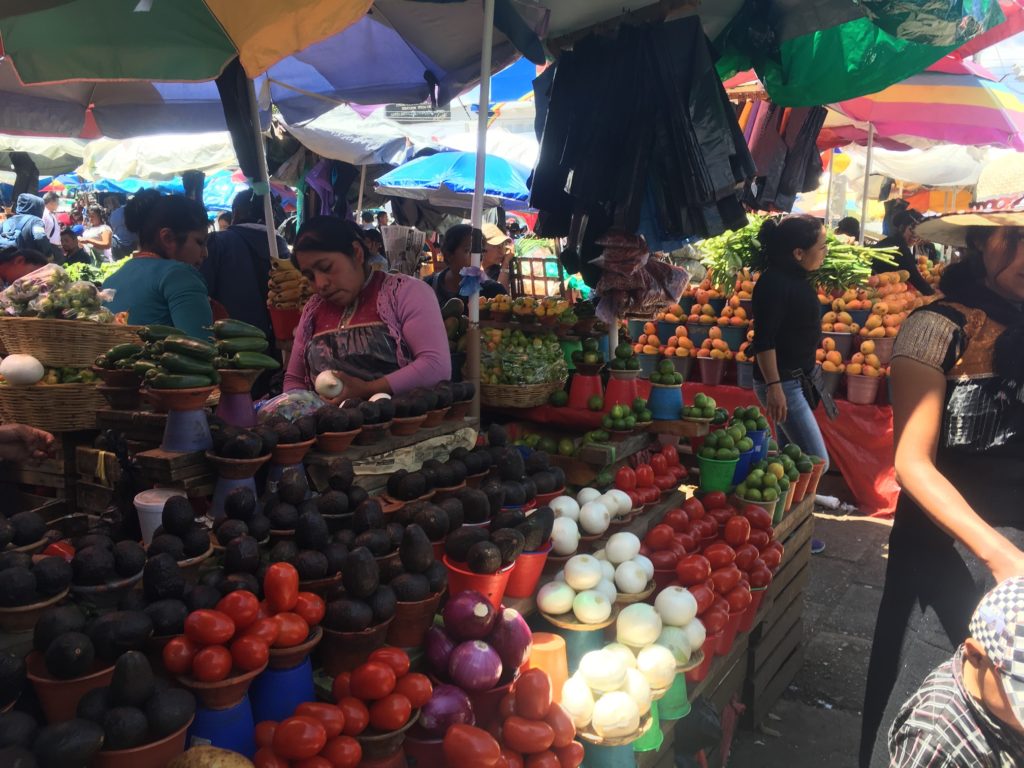 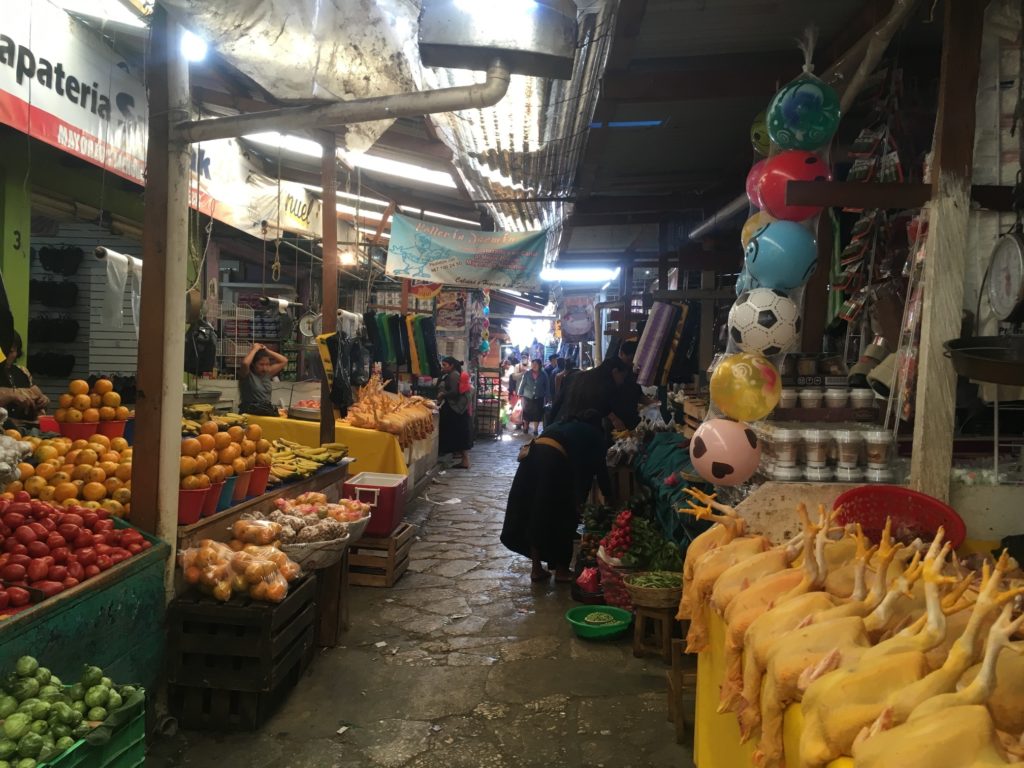 What to Eat in San Cristobal de las Casas

And, of course, we have eaten out plenty, satisfying our cravings for terrific Mexican food regularly, and throwing in some Italian, Thai, and even Domino’s delivery (which I managed to do by phone, having a relatively long and mostly smooth conversation in Spanish until we got inextricably bogged down on one sentence, likely the reason we ended up with a processed cheese-stuffed crust). We ate several times at the Mexican restaurant, La Lupe, where everything was good, but where the Burritos Lupitas are truly “maravilloso”. Finally, taco stands: 50 cents per taco, and all the hot sauce you can drink.

Other details of our time in San Christobal

A couple days after the Feria Week, we exited the front gate of our hotel to find ourselves engulfed by enormous crowds of women, only women, for some reason. Well, women and kids, because obviously men are generally way too busy for that tedious work. Huge crowds, dozens of trucks dumping more women all the time, all of them slowly making their way up to the nearby church where they congregated in disorganized groups to… well, at the time we had no idea. A pending visit from the Mexican equivalent of Ellen? Free tickets for the erotic male ensemble No Quarter South of the Border? Tryouts for The Bachelor: Chiapas?  No clue. Although eventually we asked around and learned it was far more mundane, far less funny, and altogether very “Mexican bureaucracy”, as they were all apparently “mujeres sin esposos”, basically single moms, who had to travel to the city from all their different towns, villages and farms to stand in line for hours to receive their government assistance payments. Those kind of Depression-era logistics really gives me some perspective on that BestBuy teller who gave me a dirty look for paying with cash last winter. I still get aggravated when I think about it.

We were happy to meet up with Marc and Natalie and Dog Walter a couple times, as well, overland friends of ours from Pasaj-Cap who have now begun their long road journey all the way back up to Quebec (check out all the stories from their unexpectedly eventful journey at https://slowsallygoestoguatemala.wordpress.com). Meals, laughs, getting caught in the rain, it was a real 80’s montage, although somehow without a single photo. Safe travels, kids. 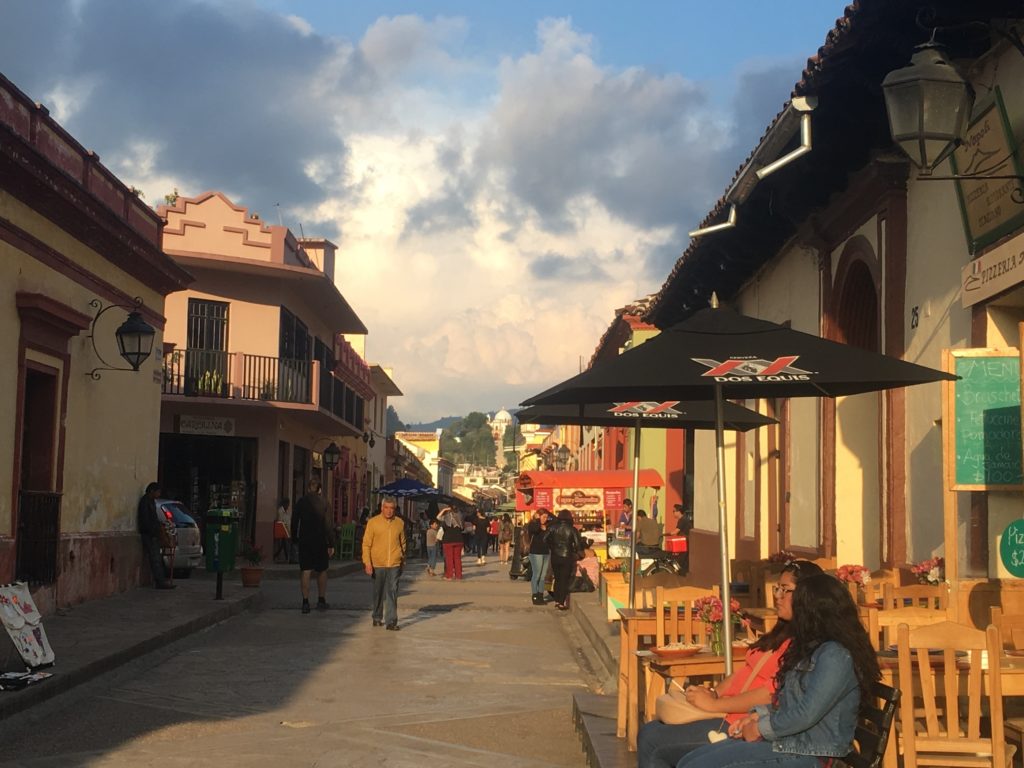 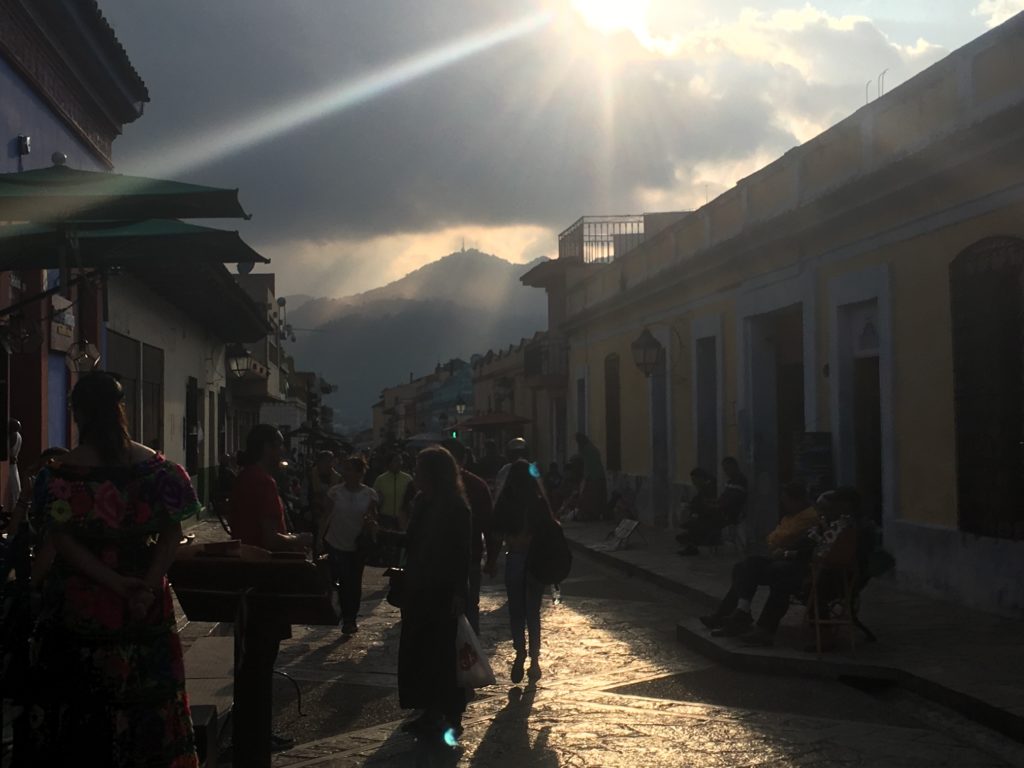 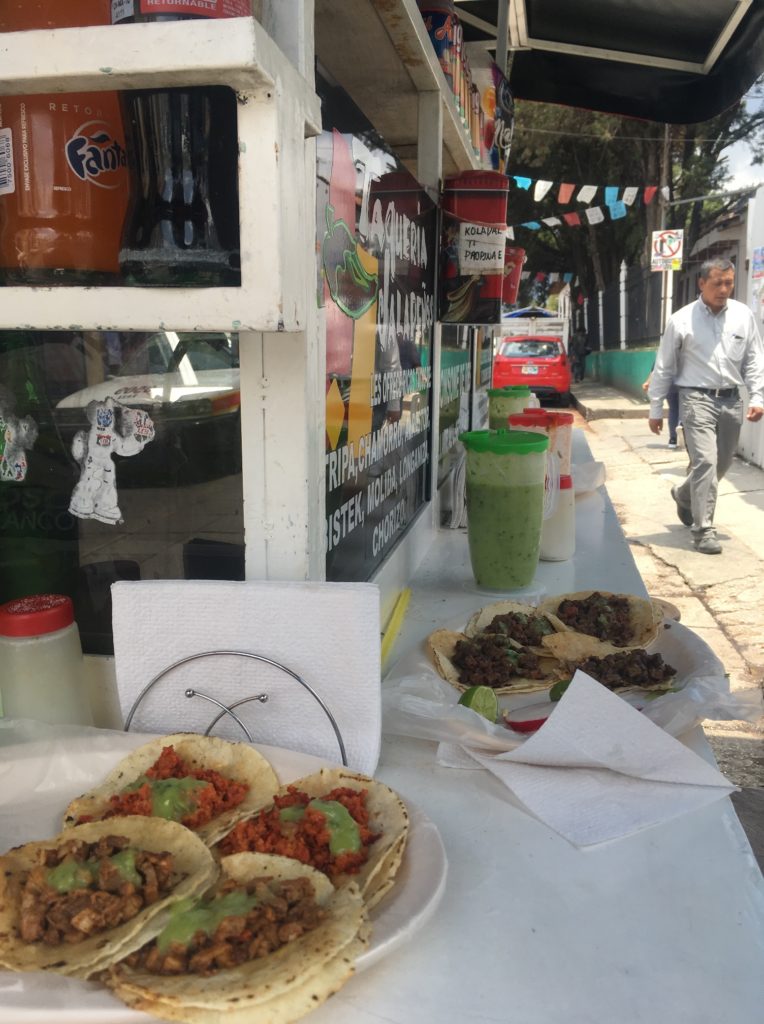