October 8, 2000. A quiet, lonely beach on the far eastern coast of Bali. Two eager but slightly apprehensive scuba students follow a stick-thin German man with unsightly blonde dreadlocks and contrastingly bookish glasses as he strides carefully into the ocean near Tulamben. All three lumber along clumsily, burdened as they are by a bevy of scuba gear – wetsuit, mask, weight belt, bulky multi-pocketed inflatable vest, various hoses and breathing apparati, long unwieldy fins, a generous helping of inexperience, with a side of cluelessness. Yet not 15 minutes later this motley group of strangely-clad individuals can be found gliding more or less gracefully 10 metres below the surface of the ocean, surrounded by an absurd assortment of manic and colourful underwater life in close proximity to the remarkable coral-draped carcass of the Liberty, an American cargo ship torpedoed by the Japanese during World War II.

Even then we understood what a privilege is was to be undertaking our third dive ever (following two shallow training dives that really hardly even count) at one of the most famous sites in all of Southeast Asia, but now, many years – and many dives, in many places around the world – later, we have an even greater appreciation for the experience. Which is, of course, why we couldn’t wait to ruin it by going back, doing the dive again, and inevitably screwing with all our fond memories. Plus, dives here go for less than 30 bucks a pop, which is cheaper than a single round of Bud Light schooners at home, so why the hell not?

Turns out I was worrying for nothing after all, mainly because when it came right down to it I barely remembered anything. I mean, it looked vaguely familiar, the massive crumbling remains of something roughly reminiscent of a ship, covered aft to stern in a staggering variety of vivid coral and teeming with fish and stuff, but no dream sequence flashbacks or anything like that. Still, it is a terrific dive site, even with so much more to compare it to than we had back then (which was really just digging shiny rocks out of the sand with my toe at Waskesiu, and diving for quarters at Harry Bailey Aquatic Centre). Good enough, in fact, to dive it twice in the same day. In some ways the most nostalgic part of the whole Tulamben experience was traversing the rocky beach and walking into the water with all our gear on, as awkward and ungainly as a bear doing the salsa (or me, doing the salsa). Almost every other dive we’ve done has started off the side of a boat, with the one key exception being Dahab, Egypt, where we were forced to trudge heavily about half a kilometre down a dusty dirt road, sweating and swearing in the 40 degree heat, as our wetsuits slowly cooked us from the inside out and the large metal tanks on our backs became hot enough to melt a tub of industrial margarine. Here in Tulamben, mind you, we were subjected to a similar journey, although in some ways worse, as the road we had to walk down was the busy main road running through town (also known as the only road in town), but at least we were able to do it without the tanks (naturally, a guy on a moped hauled those down for us, balancing all four precariously on the seat and footrest in front of him), but still in our form-fitting black neoprene wetsuits, leaving us looking much less clumsy, but far more like a band of budget ninjas of the night who had somehow lost track of the time.

Highlights of Diving the Liberty Wreck

Some of the most impressive and diverse coral we’ve seen anywhere, more than likely even more than there was the first time around, then a variety of eels, including a whole swarm of garden eels poking up from the sandy bottom inquisitively, like the end result of a fairly mediocre school project involving pipe cleaners. Also, a small spotted stingray, some enormous groupers, a couple huge parrotfish, an octopus, supposedly even a rare pygmy seahorse, although despite a considerable amount of pointing, nodding and flashing of the universal “ok” sign by our guide in a manner clearly identifying it as a question, and the fact I eventually responded with an “ok” sign of my own (in a more “response to your question” style, obviously), I have to admit that I never did actually see it. Komang just looked so excited, and really wanted me to see it, and I didn’t want to disappoint him. Eerily similar to how I ended up getting moustache implants from that Turkish waiter, or buying that painting of a Thai tranny giving a large German man directions to the ATM.

As for non-dive related information: it rained a fair bit, but during one of the lulls we got some good views of Gunung Volcano just out of town from Tulamben, twice went for excellent “Montreal-style” pizza (as far as we could tell, just like any other Canadian thin-crust pizza, except pronounced with a colonial French accent), and our hotel was pretty decent, with a nice pool, and close enough to the road to make sure that not a single truck was able to pass through town without our knowledge. I also finally filled up my first diving logbook and had to start a new one. It is much smaller than my old one, with the pages set up very differently, and, overall, I’m finding it just a bit off-putting.

See you in Ceningan. 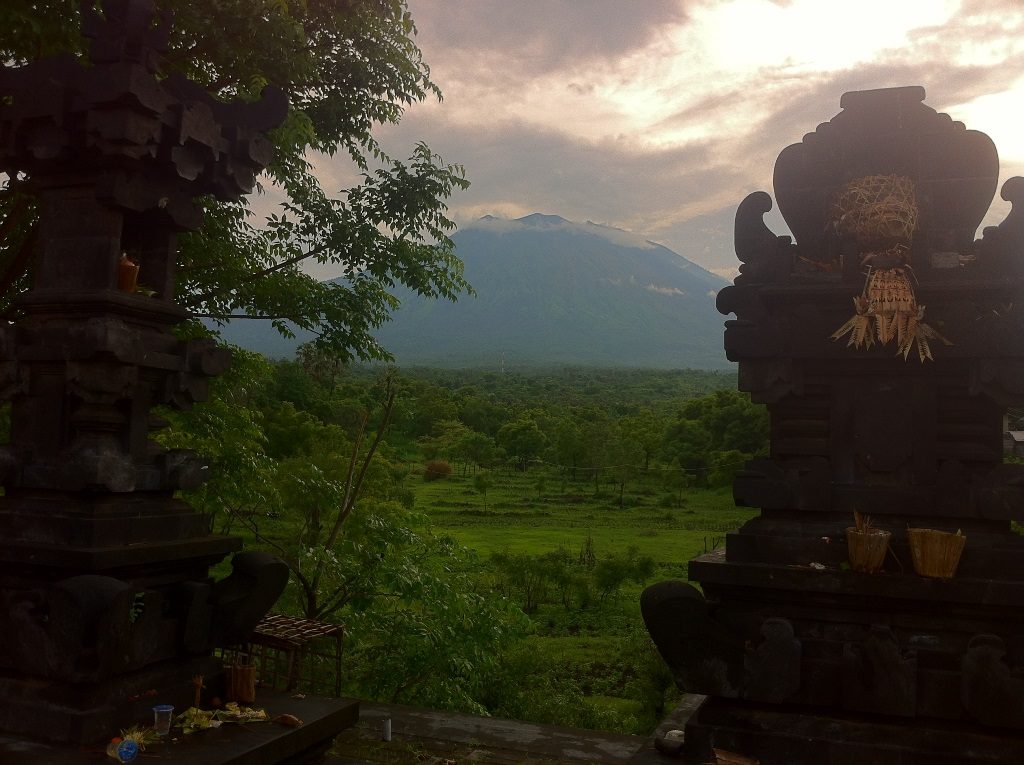 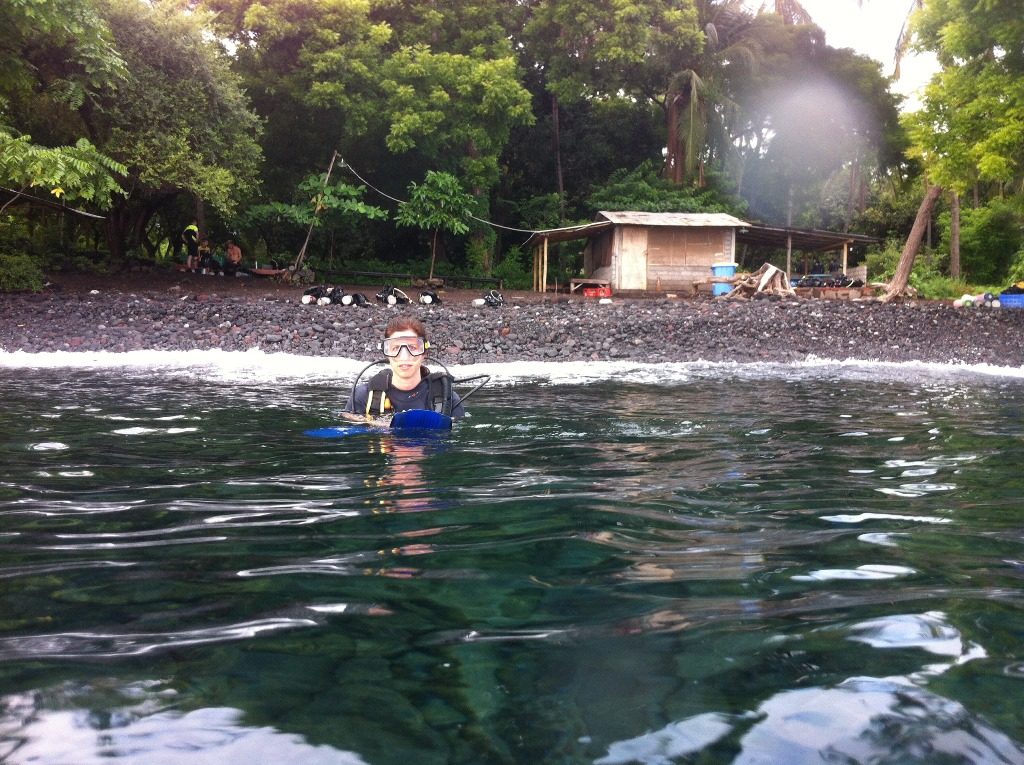 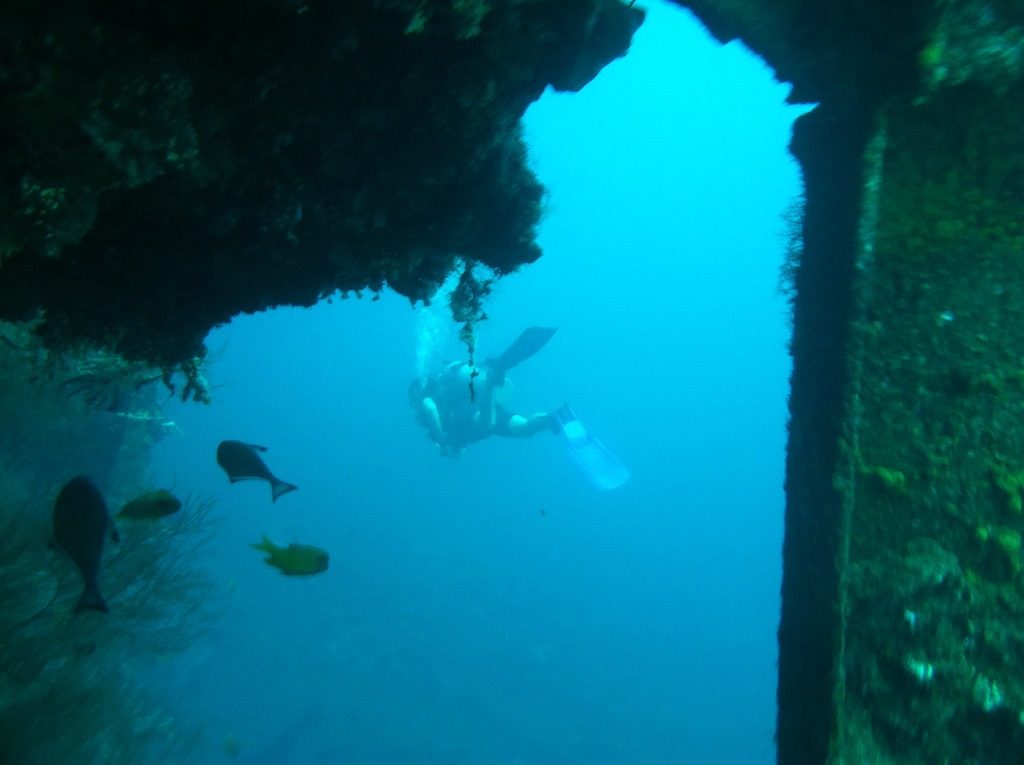 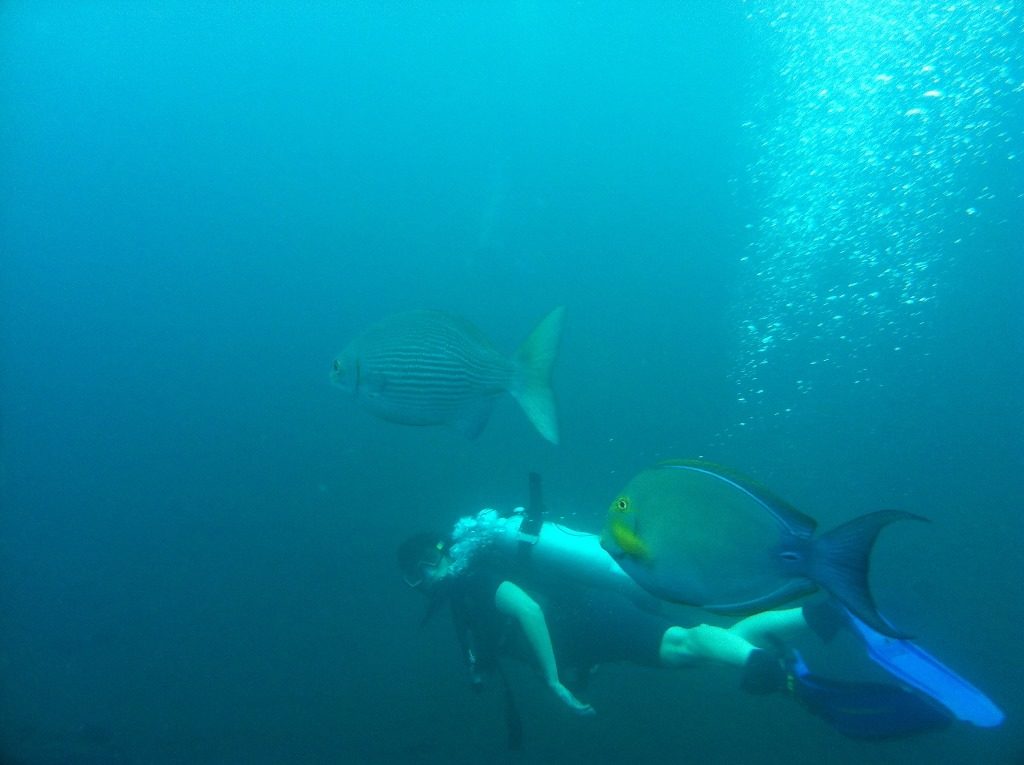 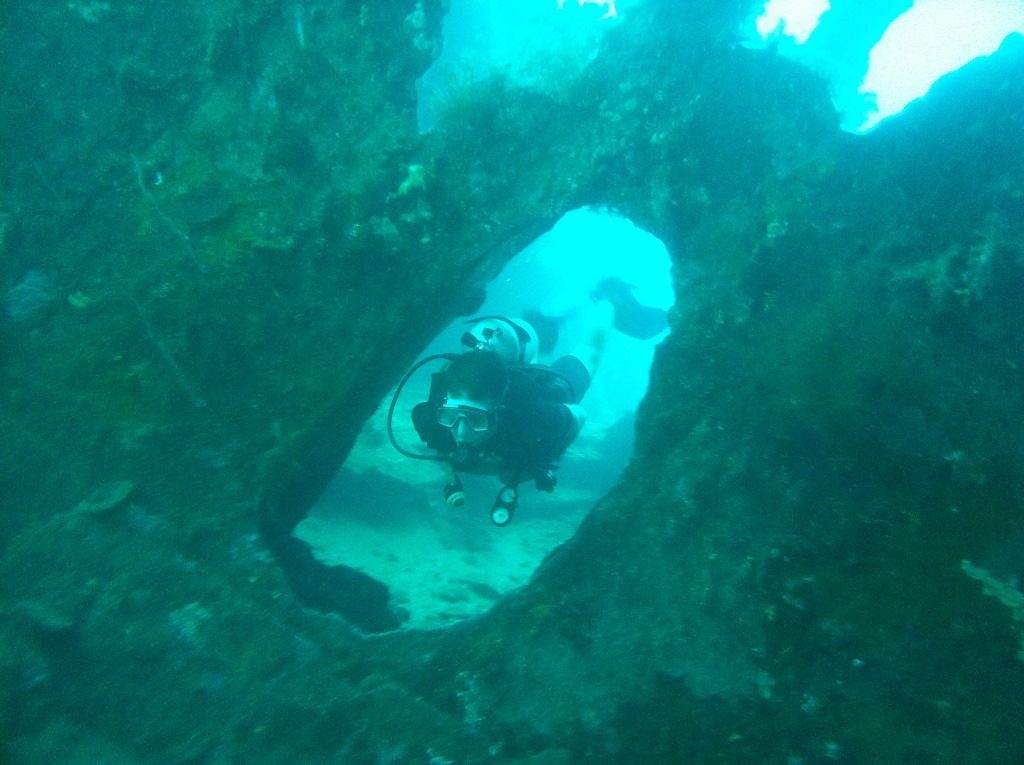 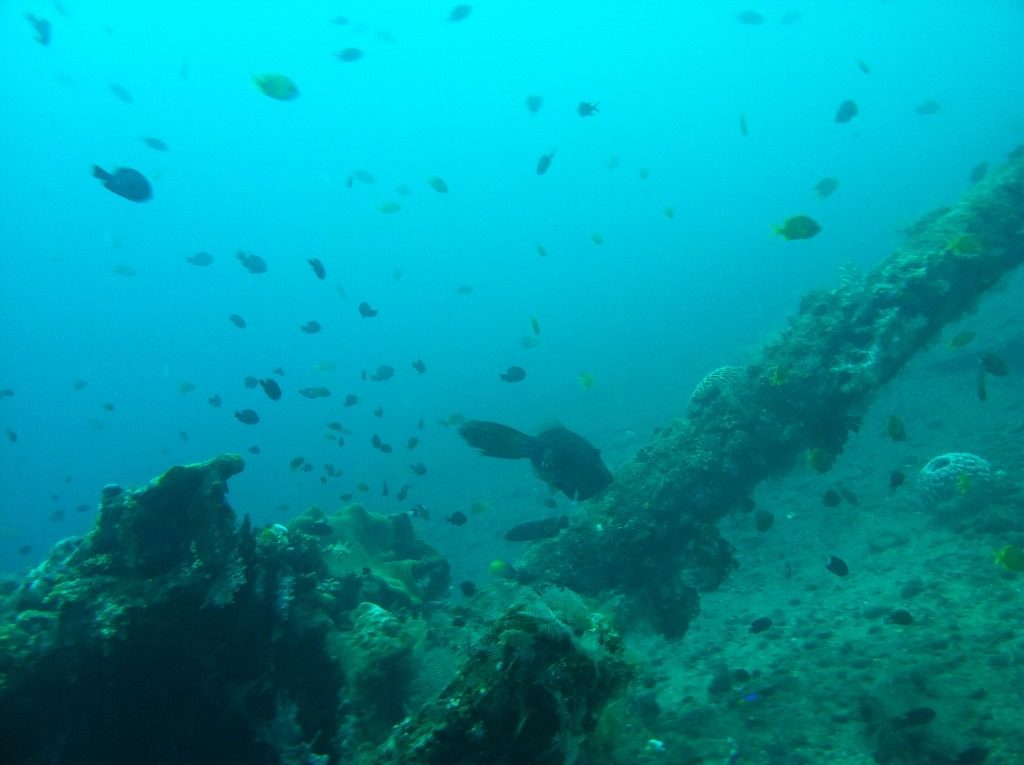 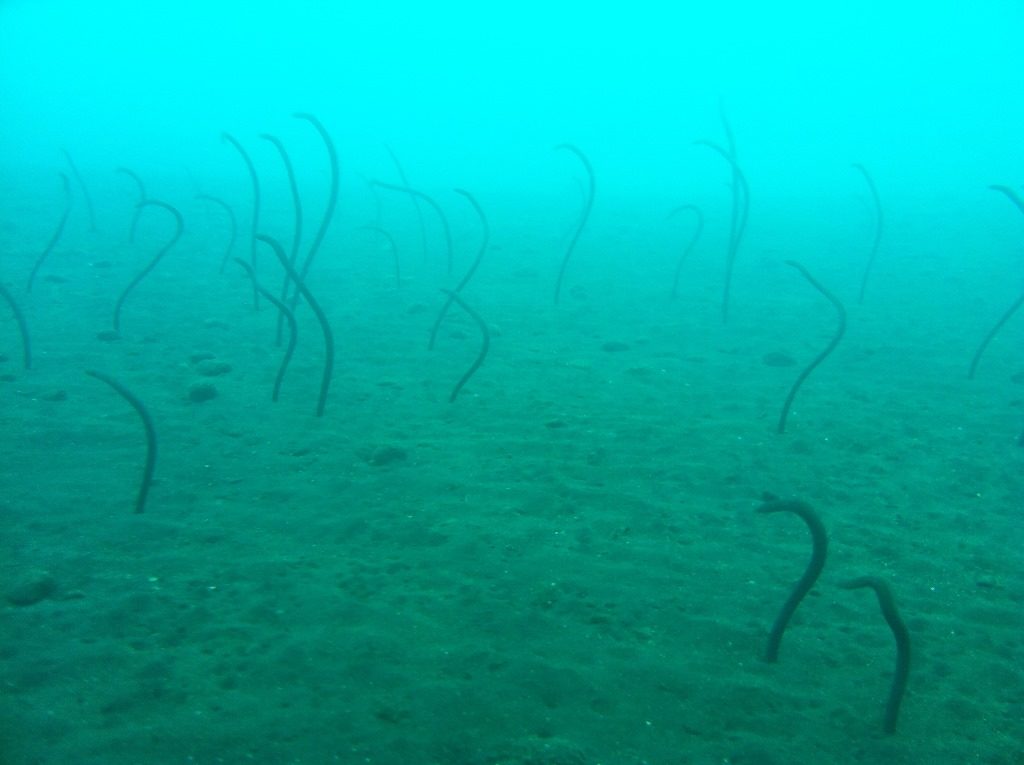 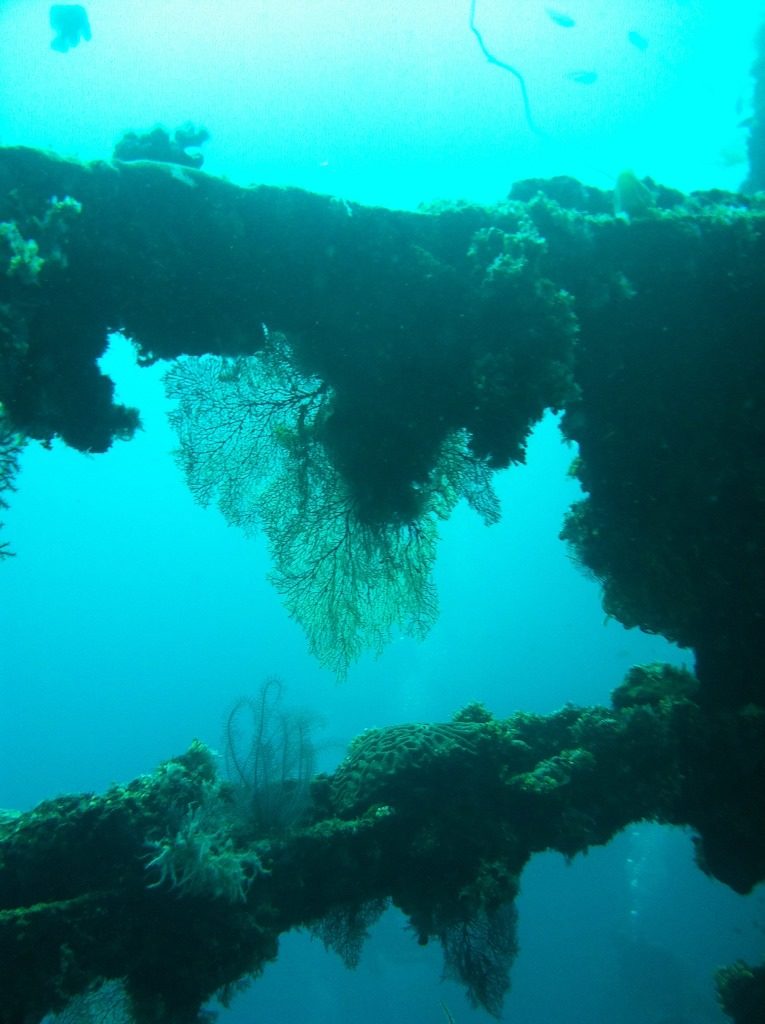