Next on Fox: “When Monkeys Attack!”

“That was the most frightening thing I’ve ever experienced”, breathed the young Englishman with a small shudder.

The Scene:  Feeling hot, lazy and ill-dressed for hiking Laynni and I lounged on the beach. Meanwhile five others, all young, male and palely British, worked their way up the steep jungled cliffs slightly inland.

The Shakedown:  As they closed in on the summit they noticed a couple cute brown monkeys perched in the nearby branches. Cameras were powered up, videos began to roll. Meanwhile the crowd of little primates continued to grow, some behind, a few more hovering above, until suddenly , as though in response to some prearranged signal, they shot forward as one. 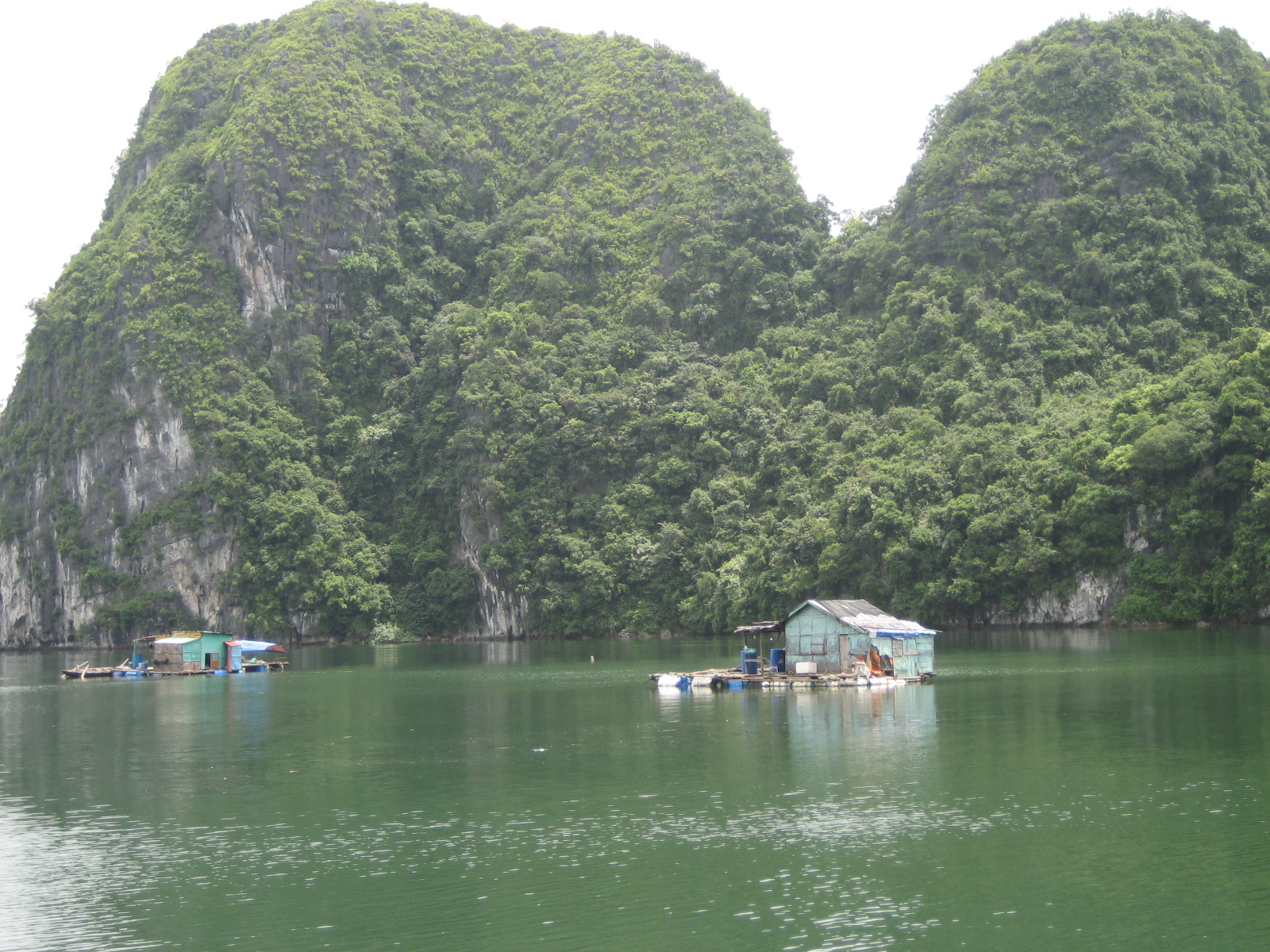 The unwitting hikers fell back in shock, only to realize they were surrounded. The ensuing chaos was partially caught on a still-running video camera amid the stumbling, shouting and frantic attempts to extricate determined little paws from packs, bags and cameras. Eventually they managed to fight free and scramble down the steep rocks bursting out of the bushes onto the beach like Lost survivors fleeing from an inexplicably dangerous cloud of smoke.

As the stunned confusion wore off they surveyed the damage. One guy with multiple bites, one missing backpack, a number of cuts and scrapes, several missing flip flops and a unanimous feeling of “What the f*#k just happened?” The missing backpack apparently contained several valuable items so our guide and a couple others decided to brave the monkeys and ventured back up to search. Roughly an hour or so later they returned.

“We have good news and bad news. The bad news is we were unable to recover your passport, wallet, camera or phone. The good news is we have your left flip flop.”

In the meantime the guy who had been bitten sat alone on the beach looking more and more angry as he contemplated time passing while he could be nursing a potentially fatal case of rabies. Neither was his mood improved when a group of otherwise unhelpful park rangers surrounded him, gleefully removing clothing to point out their own impressive collection of monkey-related scars.

And none of the participants seemed to see the humour when the monkeys eventually appeared at the edge of the beach to good-naturedly pose and frolic for the rest of the camera-toting tourists.

But we seem to have gotten a bit ahead of ourselves. Let’s go back to the beginning, starting where every proper trip begins, with a long layover in Minneapolis. We arrived early in the morning following the National Republican Convention, where I’m sure John McCain did his awkward best to somehow excite wealthy religious conservatives without any mention of tax cuts. Good luck. Anyway, as a result the airport was crowded with a strange mix of Bush couple (Sr) lookalikes and a younger group that must be mistaking McCain’s POW history for Chuck Norris in Missing in Action or something. Either way, they were all still able to present a unified front through the effective use of ridiculous red, white and blue barbershop quartet hats, all tastefully emblazoned with large “FoxNews” stickers. Nothing says “Make me leader of the free world” like a cheap styrofoam hat.

Thanks to half a sleeping pilll each the twelve hour leg to Tokyo went fairly quickly even though we didn’t have the seatback TVs we’ve become so dependent on. The only downside of the entire thirty hour epic was the old guy in front of us on the way to Bangkok sporting a festive Hawaiin shirt and a pungent aroma which seemed to be a strange mixture of BO and steamed vegetables.

We spent less than 24 hours in Bangkok before flying to Hanoi in northern Vietnam. So far it has been a little difficult getting used to the heat and staggering humidity here, with the notable exception of that particular flight. They had the a/c turned up so high that Laynni actually had her hood up and I (in my shorts and t-shirt) spent the entire two hours shivering and swearing like I’d just had unprotected sex with Britney Spears.

Hanoi is a fascinating, energetic city with its central Old Quarter set around beautiful Hoan Kien lake. The narrow, “bustling” streets (a favourite term of guidebook writers) are choked with stalls, shops and people and appear as though they haven’t changed in decades. The entire city literally buzzes with thousands upon thousands of mopeds. Two of the more important forms of self-expression in Hanoi appear to be helmets and face masks. We even found entire stalls devoted exclusively to masks for small children, all decorated with cute things like puppies and frogs and designed to minimize your baby’s pollution intake as they hurtle through elbow to elbow traffic helmetless and wedged between you and the handlebars.

The lakeside paths and benches are popular at all times of the day and night, especially with joggers who still warm up the way we did when we were seven years old getting ready for phys ed. – rapidly swinging their arms in circles until their shoulder joints actually churn in their sockets, then holding their hands straight out from their chest and trying violently to kick their palms. Cap it off with some vigorous twisting of the knees and they were ready to go.

If Hanoi is any indication Vietnamese hotels are going to be a great deal. We had a bathroom, TV and a/c all for $15/night. The only oddity was the massive two-way (one-way?) mirror overlooking the bed. Although we don’t really know what was on the other side it was still somewhat disturbing, although anyone watching would probably feel the same if they happened to be watching as I practiced my Crying Game tuck.

From there it was off to Ha Long Bay, an otherworldly expanse of limestone islands covered in jungle and riddled with caves and lagoons. We took a three day, two night trip that included cruising the bay, jumping off the boat into the surprisingly warm water, kayaking, biking, all the seafood we could want, and no extra charge to get up close and personal with the local monkey population.

Along that line, I predict a major psychotic episode around a month from now when a camera mysteriously arrives by mail in England with its memory card filled with hundreds of lewd shots of monkey penises (and if it was like any party I’ve ever been to, probably a couple pictures of Hitchcock’s ass too). 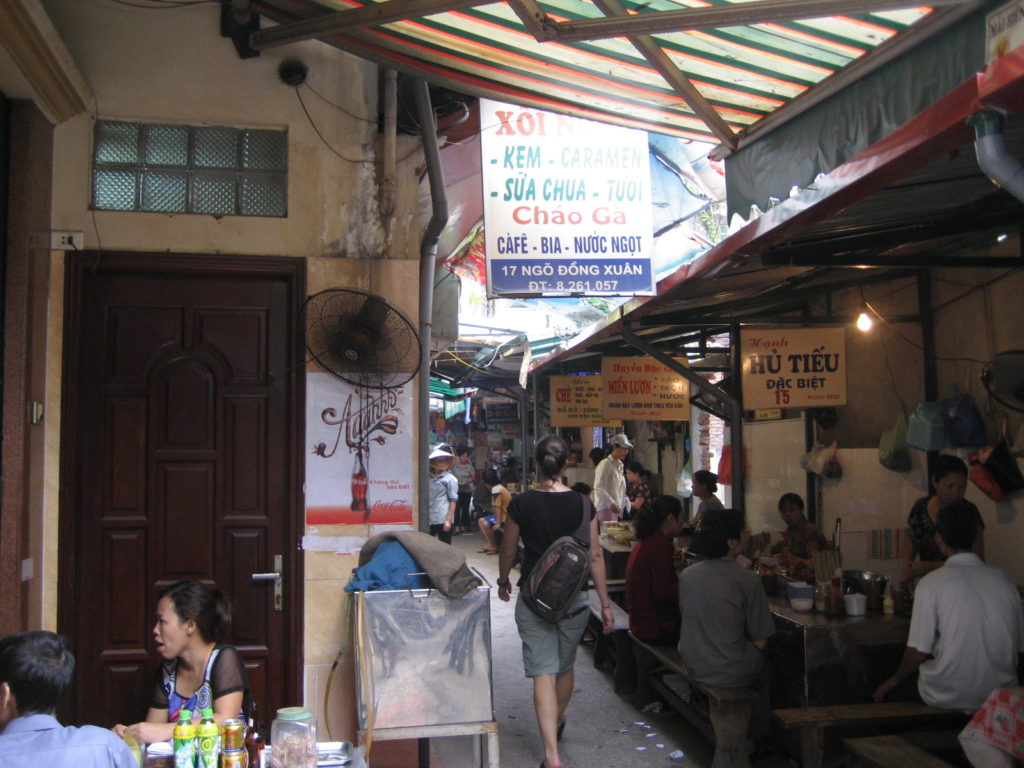 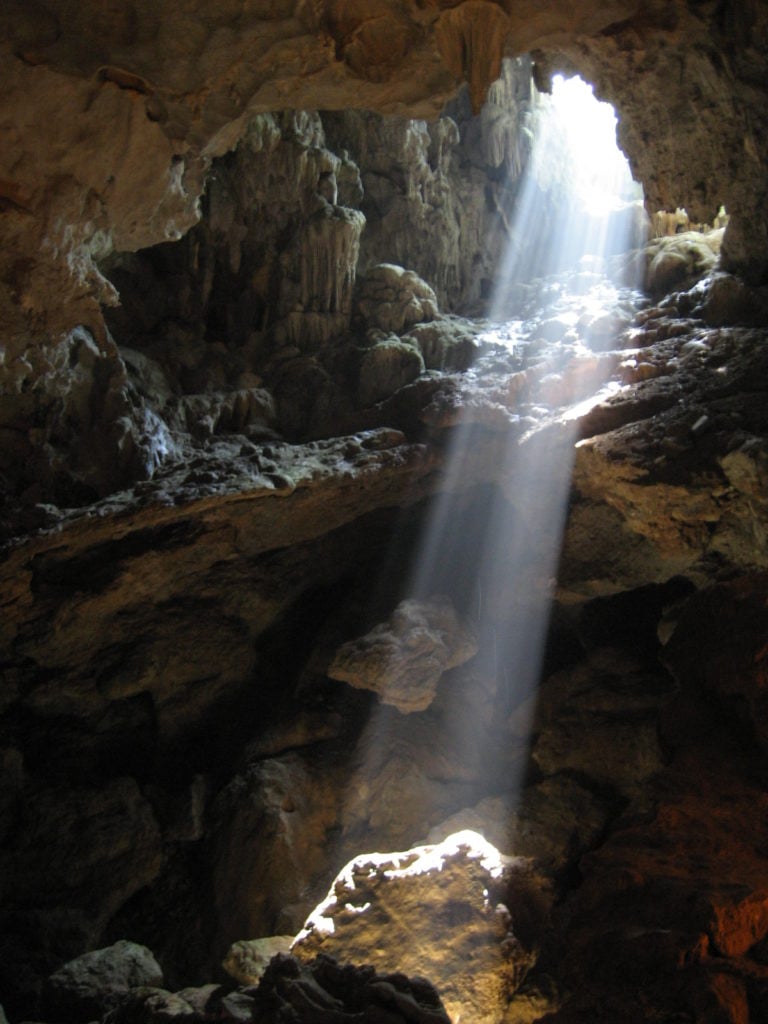 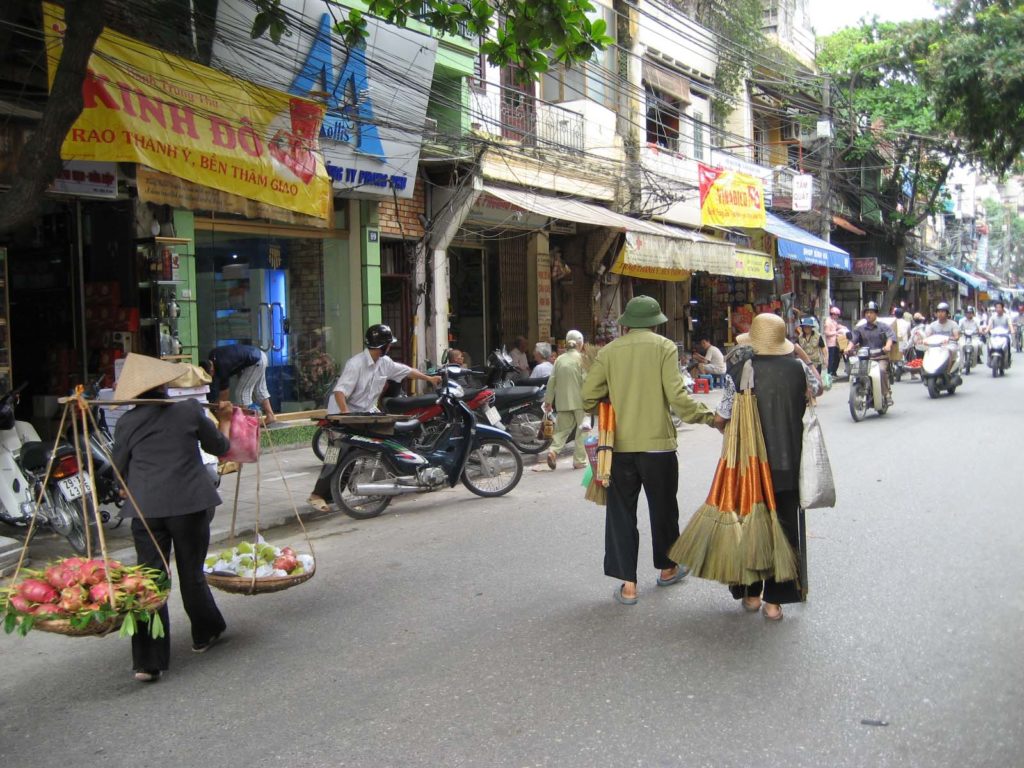 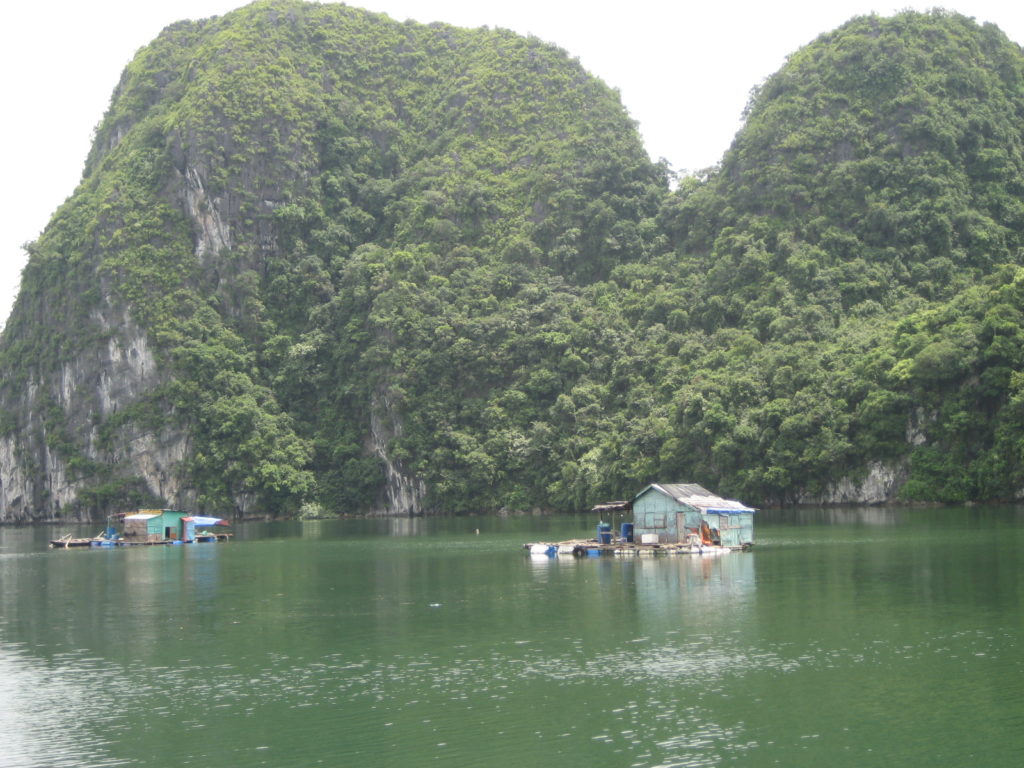 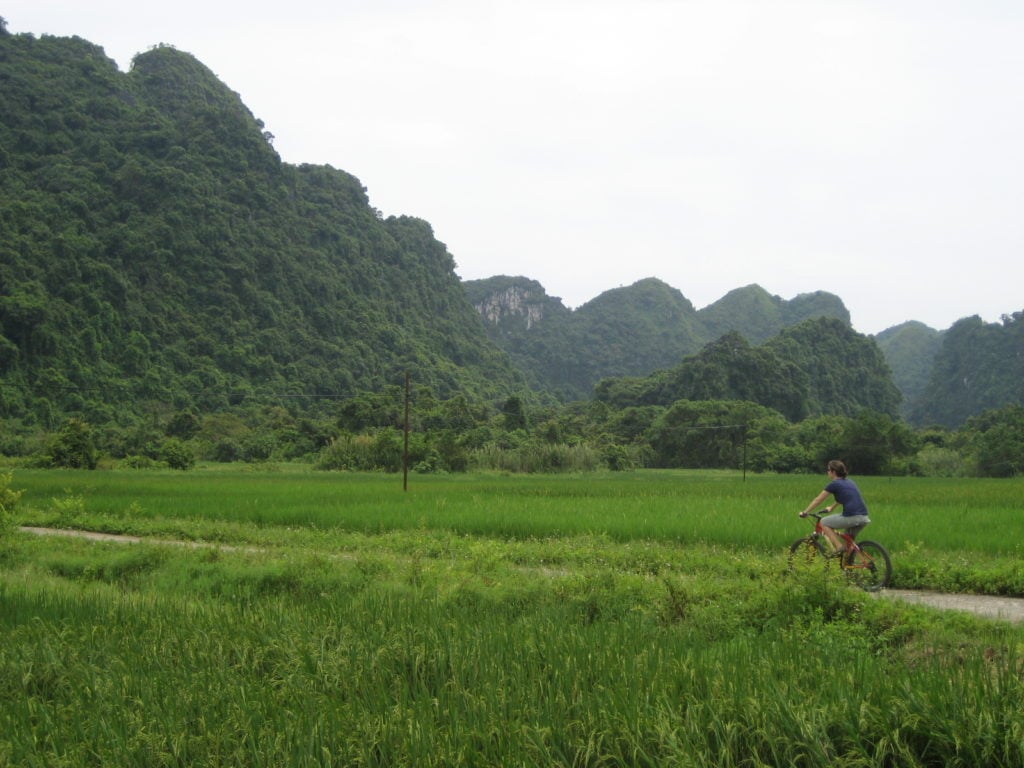 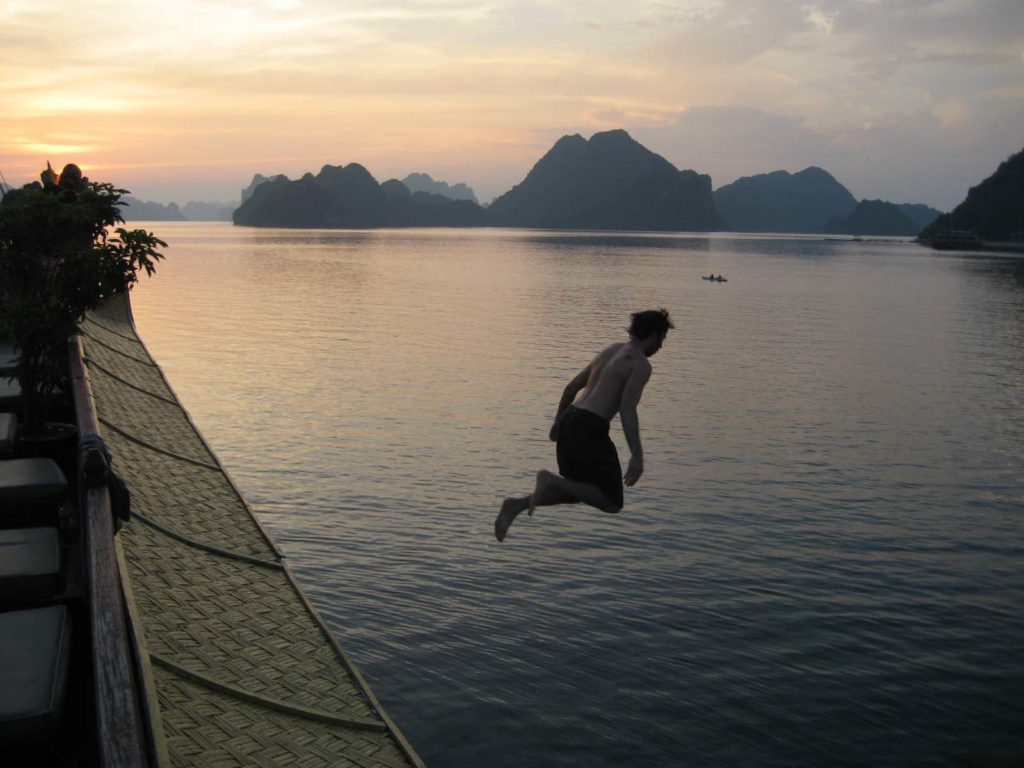