So here we are, three stops down the road, sitting on the terrace of a riverbank bar in Phnom Penh, Cambodia. I’m enjoying an Angkor draft, “The National Beer”, as Laynni flirts with sugar overload by bravely attacking her second Coke of the day. Of the day. We’ve carefully positioned ourselves to avoid being either a) caught outside, or b) trapped in our little hotel room when inevitably the skies open up sometime this afternoon. As we moved south in Vietnam the rains started getting more and more common like rashes at a swinger’s club. And just as welcome. At least in Cambodia we’ve been able to pin it down to a fairly predictable window – after lunch. In Vietnam, however, it kept surprising us like a sudden case of traveller’s diarrhoea, occurring at various time of day in both Lak Lake and Dalat, cloudy or not. In Saigon, though, you could guarantee a monsoon would simply appear out of nowhere anytime we got more than five minutes from our hotel, our tourist tracking bracelets (leather and kitschy, always cute) apparently alerting all the taxi drivers we’ve previously snubbed so they can be sure to steer clear and have a good laugh at the thought of us huddled under some narrow awning with the same look on our faces you have in that dream when you’re at the high school dance and suddenly realize you’re not wearing any pants.

Nonetheless, I should try to get back onto some sort of timeline. From Lak Lake we took a minibus five hours to the French hill station city of Dalat, a spectacular journey on a narrow, winding mountain road. The spectacular-ness was somewhat offset by the woman in the front seat who, along with her unhappy baby, spent the entire trip puking out the window. The kind of determination it must take to get on that bus knowing the discomfort and humiliation that lies ahead would be worthy of a wingman at Jax on Tequila Tuesday. On the other hand, the only interesting character I remember from the Dalat to Saigon leg was the average looking middle-aged Vietnamese guy carrying a laptop who was dressed fairly well in all respects except for his completely out of place tattered polyester team jacket, the back claiming him as a proud member of the Vienna Cheerleader squad, the front adorned with “Judy” in tasteful calligraphy.

While in Saigon (officially known as Ho Chi Minh City since the war) we walked around a lot, seeing all the usual tourist attractions before spending part of a rain-filled afternoon in a movie theatre watching, fittingly considering the wild bus ride we had recently endured, Death Race 2000. Despite the name, however, it was not actually a touching coming of age tale about a brave Asian she-male cheerleader. We were a little disappointed since this probably had less violence. Anyway, on a couple previous trips I’ve mentioned the odd practice of movie theatres using assigned seating. Ha ha, isn’t that weird! Well, you know, it may take longer than the answer to a yes/no question in a presidential debate but given enough time we actually can recognize a good idea, regardless of how hard it is to believe that such a thing could originate somewhere besides a mid-sized city in the Canadian prairies. Whydon’t we get seat numbers when we buy our tickets? Is there some huge conspiracy controlled by the major studios? What could they possibly have to gain by having us wander around in the dark desperately trying to find not only enough spots for us to actually sit in but naturally a couple extra so we are able to leave two useless singles on either side. I highly doubt that it is to protect us from the intense trauma of inadvertently touching elbows with a stranger. Yikes, would we ever return?

A couple days ago we crossed over from Vietnam to Cambodia, gazing out the windows of yet another bus, curiously watching as the road narrowed, the pavement slowly gave way to, well, shittier pavement, and the roadside scenery changed from a never-ending string of towns to encroaching jungle, fields with farmers knee deep in water ploughing behind trudging buffalo, and naked children waving happily with one hand while viciously batting their weiners to and fro with the other. What a country! Many of our fellow passengers were roughly-dressed farmers and labourers who we naturally assumed were returning Cambodians until we noticed that they seemed even more enthralled with the passing countryside than we were. Tourists as well, I suppose. So we all stared out the windows together, mesmerized by the old sitlt houses, colourful wats and bright green rice paddies as though they were as entertaining as two dogs locked together in post-coital embarrassment.

While waiting for the ferry to cross the Mekong we were surrounded by small women balancing shockingly massive trays on their heads, all heaped with a variety of dead animals on sticks. While we were reasonably unsurprised by the giant shrimp and cubes of fatty meat we were somewhat put off by the tiny birds roasted whole, and couldn’t help but gape openly at the pile of neatly skewered snakes. After that we passed a few more fields, a couple small villages, noticed the faint smell of urine coming from the fidgety guy behind us grow slightly stronger (or maybe I was just thinking about it too much), started seeing more traffic, passed a sign in English bizarrely indicating the presence of “Veals Boy Snake Cabinet” and then, just like that, we found ourselves in Phnom Penh, the only city of two million people I’ve ever seen with a tiny, partially paved road serving as its main eastern gateway.

We spent our first night in the capital at the Indochine Hotel but ended up moving after one night. We had chosen it mostly for its prime location overlooking the river but, unfortunately, a major construction project has most of the view blocked, and will until sometime in 2009. But it was a combination of reasons really, as we also took into consideration the overly quiet atmosphere (which some might list as a positive, I know), and the intimidating expectations brought on by our room which came with two gigantic beds barely visible in the dim glow of the red sex light, and the half a pack of condoms in the dresser.

Phnom Penh has an interesting stretch of pizza joints all offering “happy” pizzas upon request. It was actually a whole day later before I caught on that “Happy Herb’s Pizza”wasn’t just a place run by a jovial guy with the name of a radio ad salesman. There are four of these places side by side and we never saw more than two of them open at any given time, leading us to believe the happiness wasn’t limited to the paying customers. Interestingly there was also a group of about a dozen young people who seemed to spend most of their waking hours on Happy Ave. And, judging by the dresses and babushkas, I’m pretty sure they were a Mennonite youth group. Clearly Cambodia is a long way from the Saskatoon Auction Mart.

Well, that’s probably enough news for now. I still haven’t managed to attach the video of me replicating all the early morning workout warriors in Vietnam – although I did crash this ancient computer four times trying. Maybe I’ll just email it. Or delete it. I’m really pissed off right now. See ya. 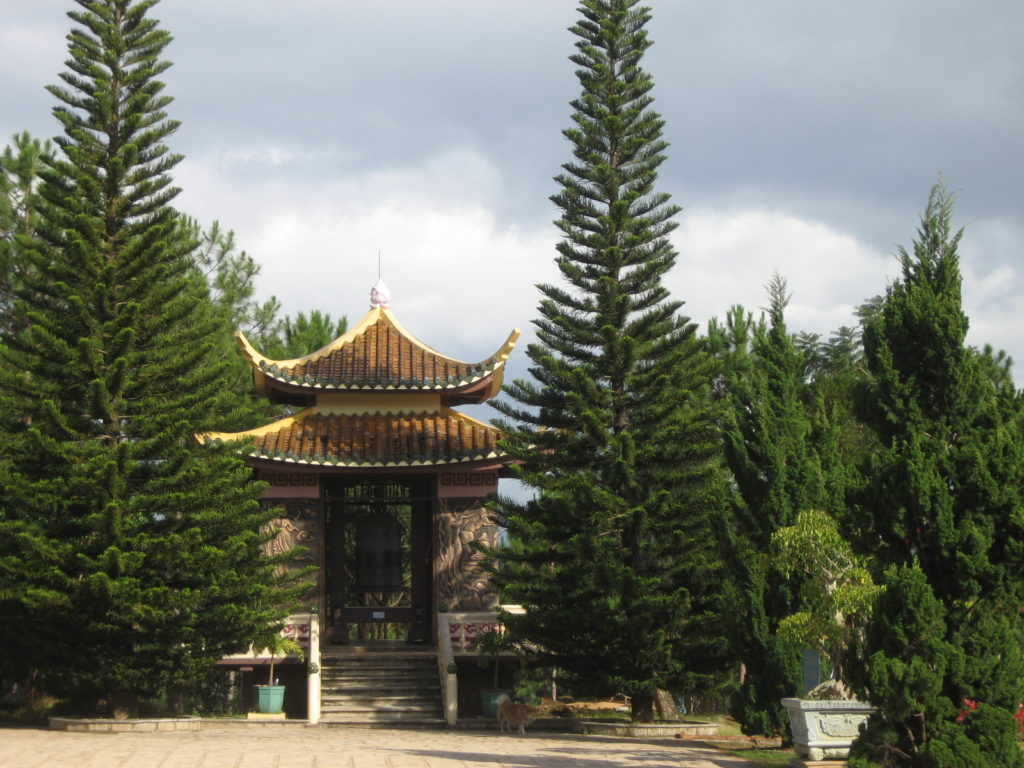 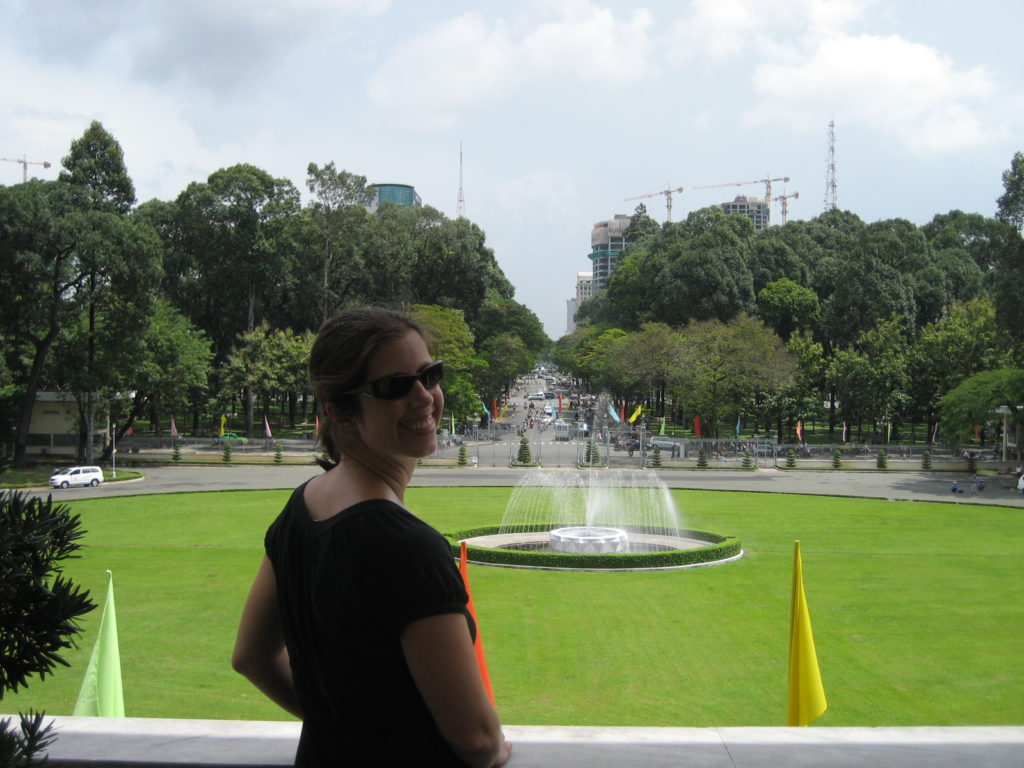 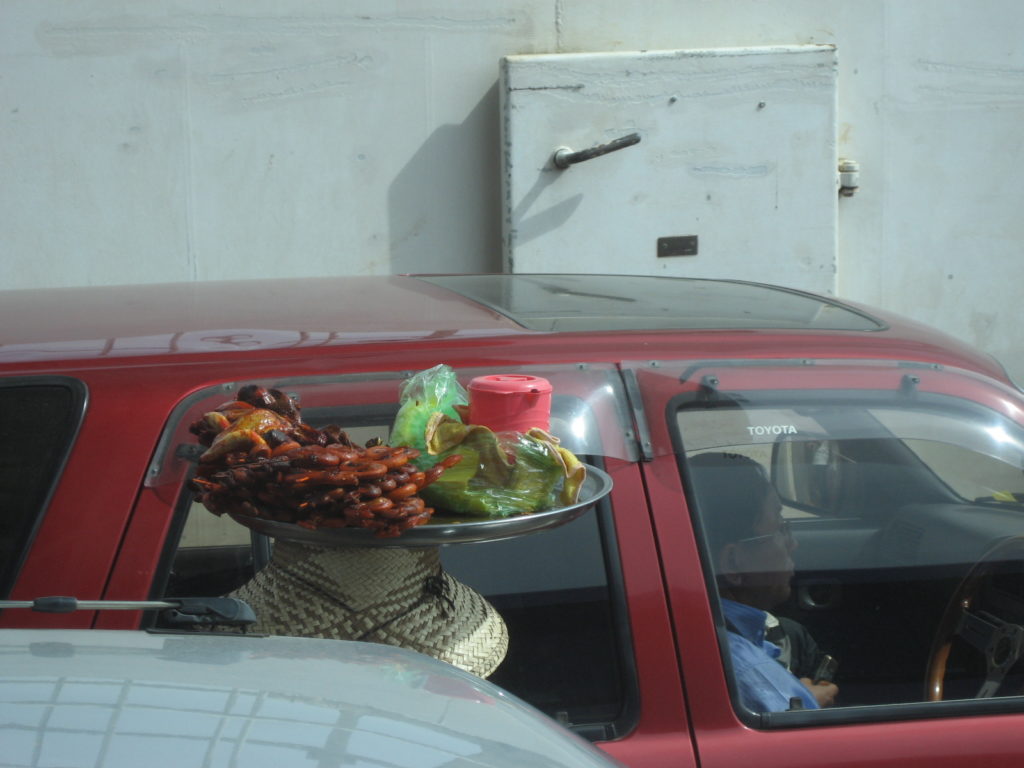 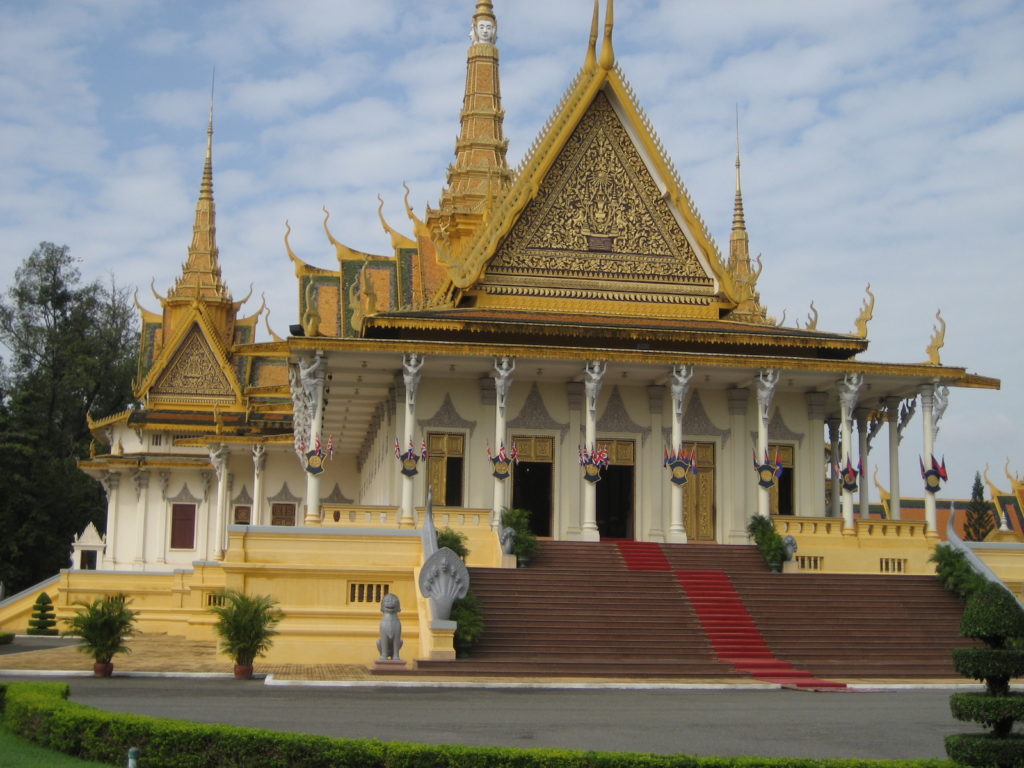 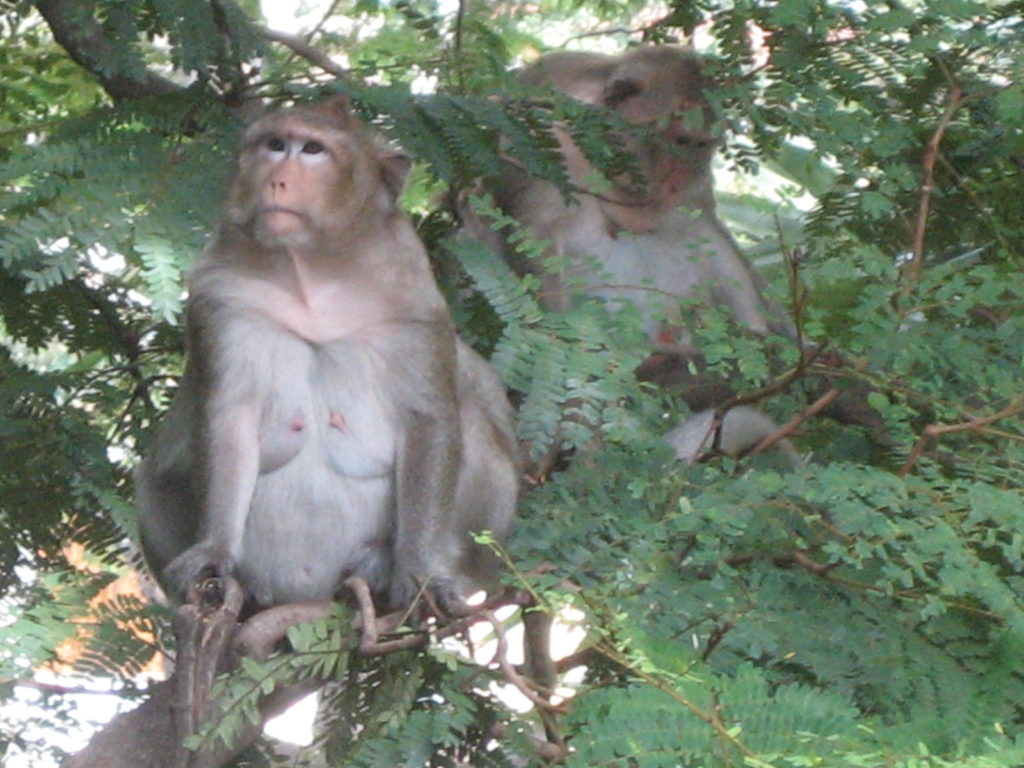 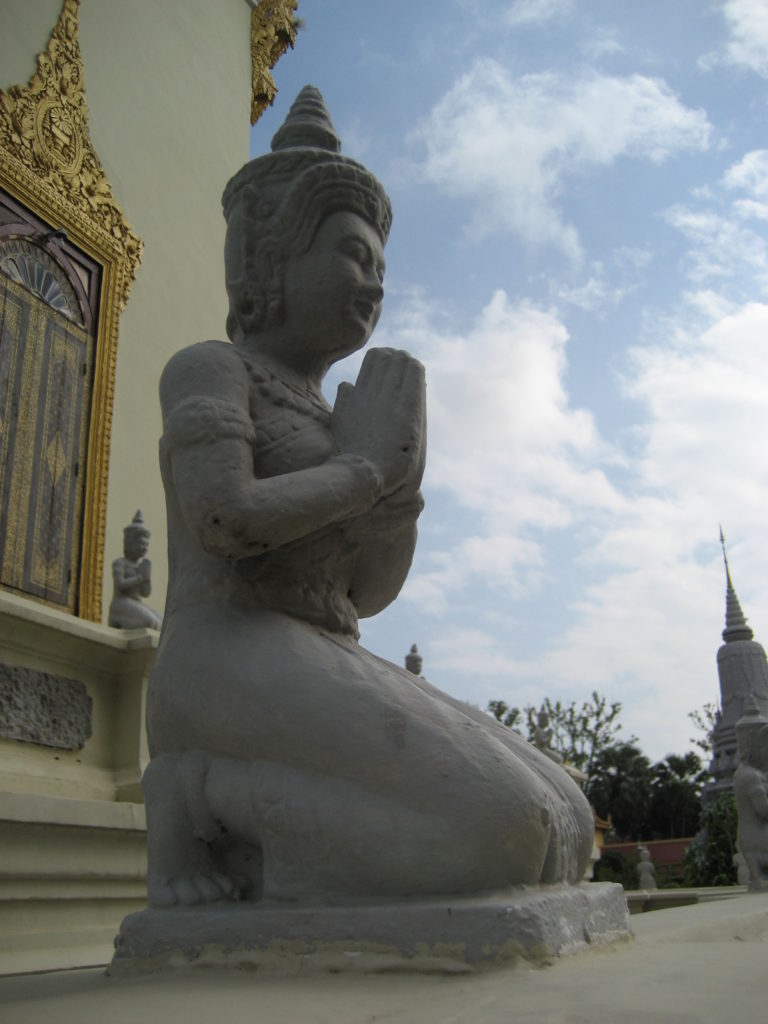