Following the urban chaos of Kuta we did an abrupt 180, travelling out to the rolling green rice fields of eastern Bali to the picturesque village of Sidemen – roughly 2/3 of the way across Bali yet only a simple drive of about an hour and a half. Gives you an idea of how small this island really is, although the numerous narrow winding stretches of road slow really things down, and on the more main roads that everyone prefers to use – wider, flatter and straighter – traffic became a problem. Which is why it takes an hour and a half to travel 60 kilometres, although despite this massive inconvenience we were somehow still left with enough time to accomplish everything we had planned in our busy day (i.e. eating, reading, packing, driving, unpacking, reading, eating).

The Rice Fields of Sidemen

Our destination, the Sidemen village area, apparently had basically no tourism as recently as 5 or 6 years ago, when the first clever souls realized foreigners would pay handsomely for a chance to immerse themselves in the heart of rural Bali, with all the lush scenery and traditional Balinese culture local families have been enjoying for eons and rather than using terms like amazing, spectacular or authentic, have probably always referred to it simply as “home”. Unfortunately, or fortunately, depending on your point of view as a tourist, or economic stake in the process as a local villager, things are changing fast with a steady stream of villas going up, all strategically placed to take maximum advantage of the rice field views. Of course, not every new place is ideally located to maximize the views of the already existing hotels, often doing pretty much the opposite, and with every sprawling set of new villas that emerges the remaining rice fields, aka the whole reason people want to stay in those villas, get a little bit smaller. However, for now the area is still beautiful, friendly and relatively untouched, and a more than welcome change from the craziness of Kuta. Plus, we were finally starting to shake the worst of the effects of jet lag, making it much easier to sleep through the night and gradually eliminating that noon feeling of adult onset narcolepsy.

Where to Stay in Sidemen

We stayed at a place called Sawah Indah, reputedly built by a local guy who raised the money spending a couple seasons tree-planting in Canada. Beautiful place, surrounded by scenic fields, an awesome infinity pool (despite the fact it was often overflowing with screaming French children), an excellent restaurant built up nice and high to enjoy sunset over the terraces. Nice rooms, and an immensely friendly workforce of what must have been around 30 young people, all of whom chose to spend one full morning tending to the 20 square foot area of plants, flowers and grass immediately adjacent to our terrace. Very festive.

What to do in Sidemen

Our first morning in Sidemen we were a veritable whirlwind of enthusiasm and activity, making it to breakfast by 8 on the nose, packed and ready to hike by the crack of 9, heading out for a couple hours wandering the rice fields under the helpful guidance of young Komang, part-time waiter, part-time hiking guide, full-time teenager. Although we generally prefer to hike on our own, at our own pace, arguing about directions and getting lost on our own time, while aimlessly – and mostly incorrectly – speculating on the names, uses and history of the things we pass, it was probably a good thing we went in for the guided tour this time around despite the outrageous price ($14 for a private hiking guide for the morning – where are we, NYC?)  since we would never have made it past the first field alone, at least not without ending up trudging through thigh-deep mud or being chased off by a riled old lady, angry at being interrupted in the middle of her laundry/lunch/bath time. Interesting clash of cultures, and yet another entry for the file of “things you’d never see at home” – among the many local villagers we passed hand-washing their laundry in the streams and small canals was a group a teenage boys diligently scrubbing away at their Billabong shorts, RipCurl shirts and DC hats. It seemed as though every field was at a completely different stage in the growth process – from being saturated with a couple feet of water to a forest of waving green stalks to newly harvested piles. Navigating our way among the fields, sliding around in the mud, going up and down hills, and occasionally crossing knee-high streams, we got a fascinating look at life in rural Bali, along with the usual spectacular scenery, a brief glimpse of several foot-long monitor lizard scurrying into the water, plus, just for good measure, an adorable little leech on my ankle.

In a rather incredible coincidence of timing, while going for a short stroll the morning we were leaving we came across what we felt was a strangely large gathering in the middle of nowhere at the end of a tiny dirt road, especially considering it was 10 am on a Tuesday morning. Naturally we inquired, and learned that it was Cockfighting Tuesday at the truly impressive Sidemen Cockfighting Pit. Compared with my only previous cockfighting experience, a rather informal gathering of shady men and dazed opium smokers in a dusty lot in northeastern Thailand, this place seemed like Mexico City’s Estadio Azteca (in that it was much larger, we were the only 2 white faces in the crowd, and we understood little of what was being yelled at any given time). Set roughly a story down into the ground, with several levels of bleachers, a giant tarp to keep out the sun, rain and any overly eager birds of prey, and surrounded by a diverse assortment of food stalls and totally unlicensed massage therapists, including the guy who, for a very reasonable price, would cover your back in horn-shaped suction cups in hopes of both sucking all the harmful toxins out of your body and leaving you with several weeks’ worth of massive unsightly bruises designed to impress friends and family physicians alike. Whatever our feelings may be regarding the vicious and brutal “sport” of cockfighting (fairly unenthusiastic, I’d say), it is clearly an important part of the culture here (at least for a certain segment of the population – much in the same way some people at home spend hours playing VLTs, or certain people really enjoy roofie night at Beily’s), and an opportunity far too intriguing to pass up. So we arranged for our driver to show up a bit later than planned and spent the next couple hours watching upwards of 500 Indonesian men (the only women present who deigned to attend were all there to sell something, seemingly uninterested in the testosterone-fuelled bloodlust beyond how these frantic gambling idiots might pad their bottom-line) wildly scream, cheer, groan and, of course, gamble, in a deafening, cacophonic exercise that I could only describe as absolutely incomprehensible, yet somehow always ended in all sorts of money being passed erratically in every direction throughout the crowd. Each match was prefaced by a minute or two of loud, hectic yelling, with the entire crowd chanting somewhat in unison while holding their arm straight out in front of them and using their hand to frantically signal right, left, up or down, every now and then responding to someone hollering in their direction by raising a certain number of fingers. These were the only patterns we could determine, and still had no clue how they were determining the odds, how anyone knew who they were betting for, or how much, or who they were betting with. It was bizarre. If we hadn’t actually seen money change hands after every match I might have suspected it was all an elaborate ruse concocted solely to gather hilarious footage of our stunned faces. Much like watching old people talking to bank tellers. Apparently it was to run all day, which made sense based on the turnout and the many dozens of roosters waiting rather loudly and impatiently in their wicker cages for their chance unleash the fury, but a half dozen matches was more than enough to satisfy our curiosity because, although it certainly is an intriguing look inside what is obviously a hugely popular Balinese pastime, and supposedly the blood is used in certain holy rituals, this shit was truly brutal and disturbing. Between the viciousness of the roosters, the feverish intensity of the crowd, and the graphically repeating spectre of death (thanks in no small part to the large metal bladed spurs affixed to enhance the action), this is not an experience either of us would want to make a habit of. Plus, our chances of picking a winner was considerably hampered by the fact we could rarely even tell the combatants apart, probably not boding well for our hopes of success on the gambling end.

On the whole, our time in Sidemen ending up involving a lot of things we hadn’t experienced in quite some time -sleeping under a mosquito net, falling asleep to the erratically toneless croaking of frogs, one of which then chose my drying towel as his preferred place to hide from the sun – causing both of us quite a stir when I grabbed both the towel and him and shook, my mind taking a few moments to grasp the reason my towel suddenly felt so soft, pliable and undeniably slimy, and one evening a cockroach mischievously hid behind the “p” on my keyboard and waited until just the most startling moment to scurry across my hand. Plus, I had chicken satay for dinner one night, and found that I still don’t particularly care for it.

Next up, the nostalgia tour continues with a second go-round scuba diving the Liberty Wreck in Tulamben… 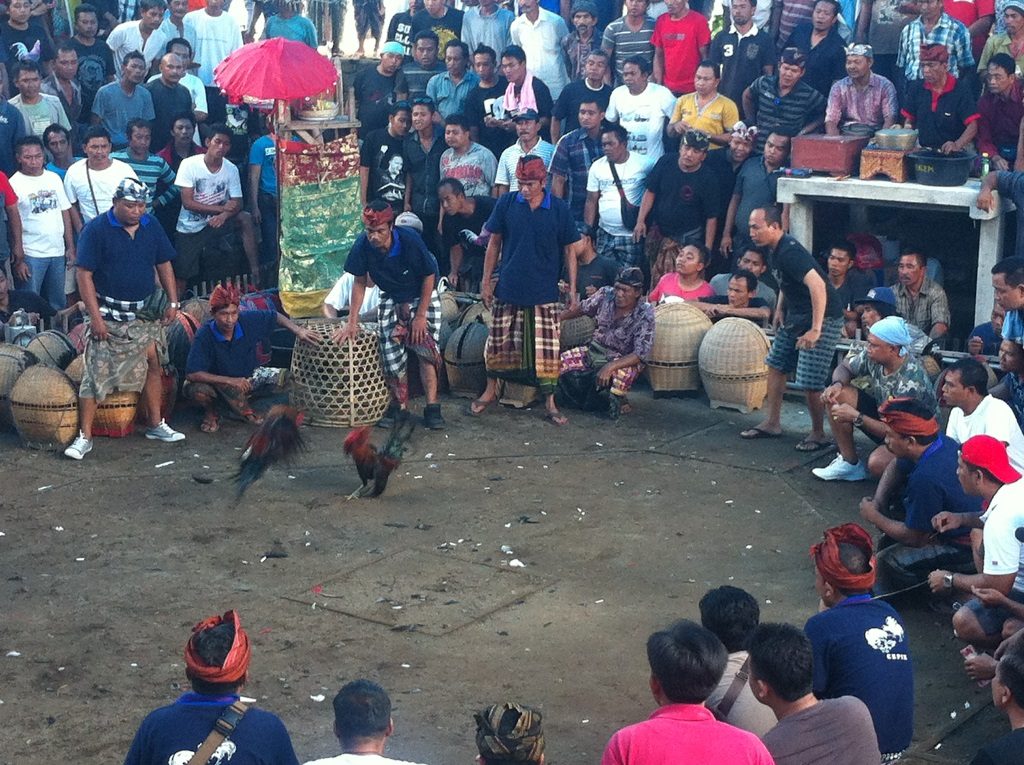 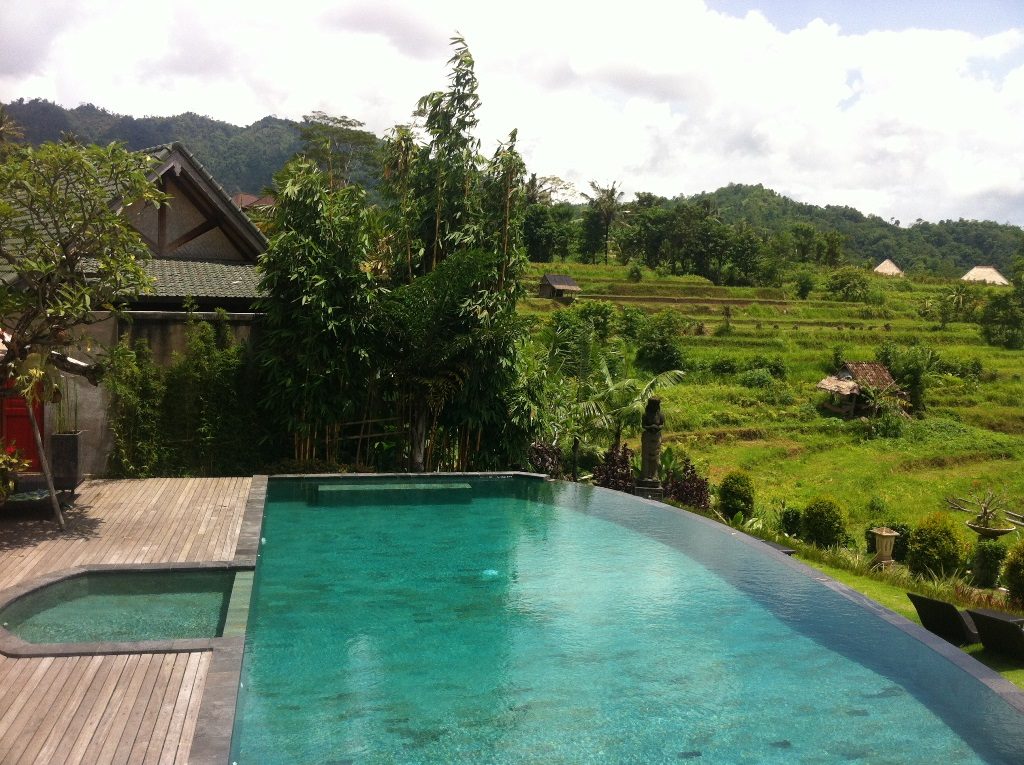 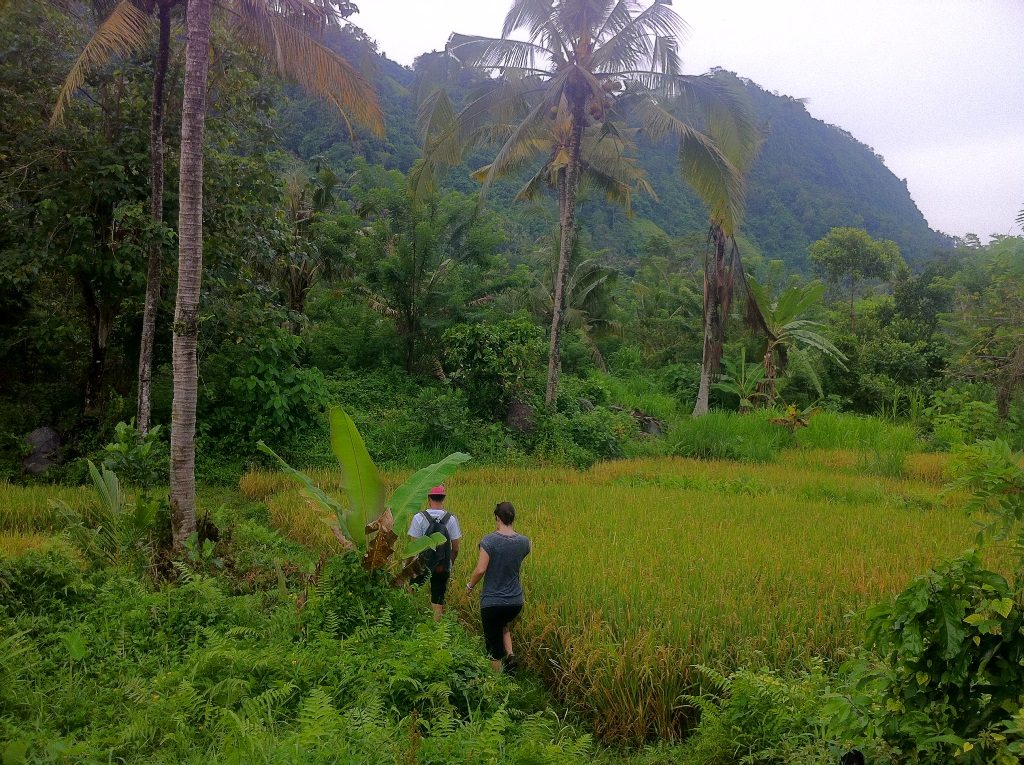 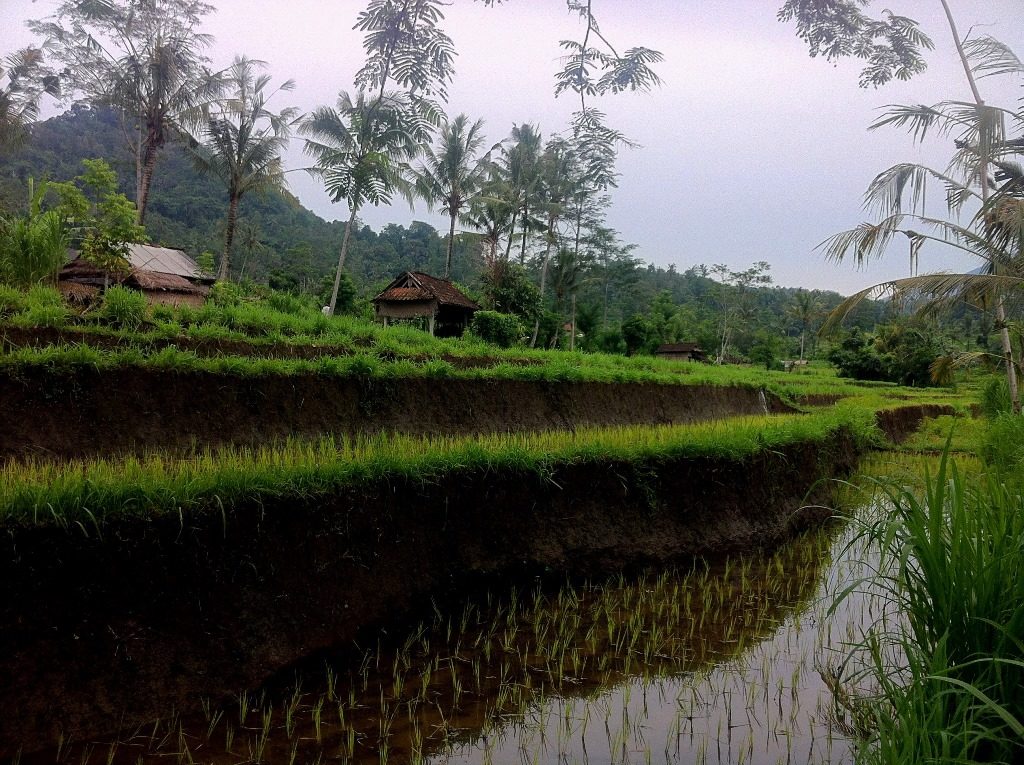 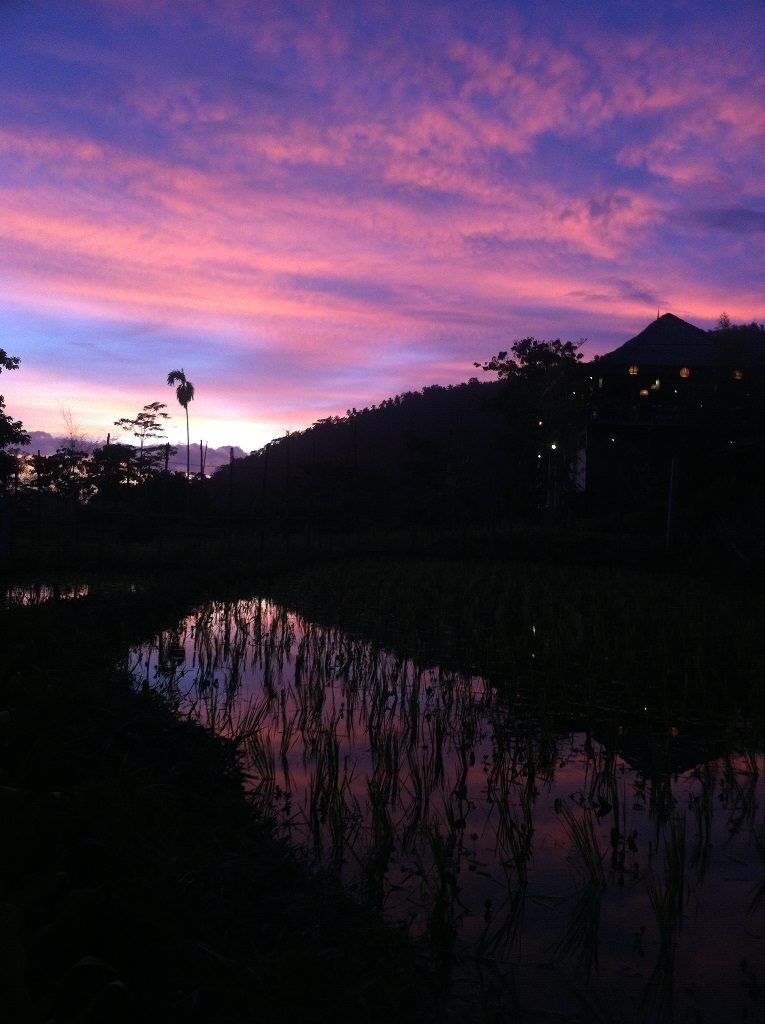 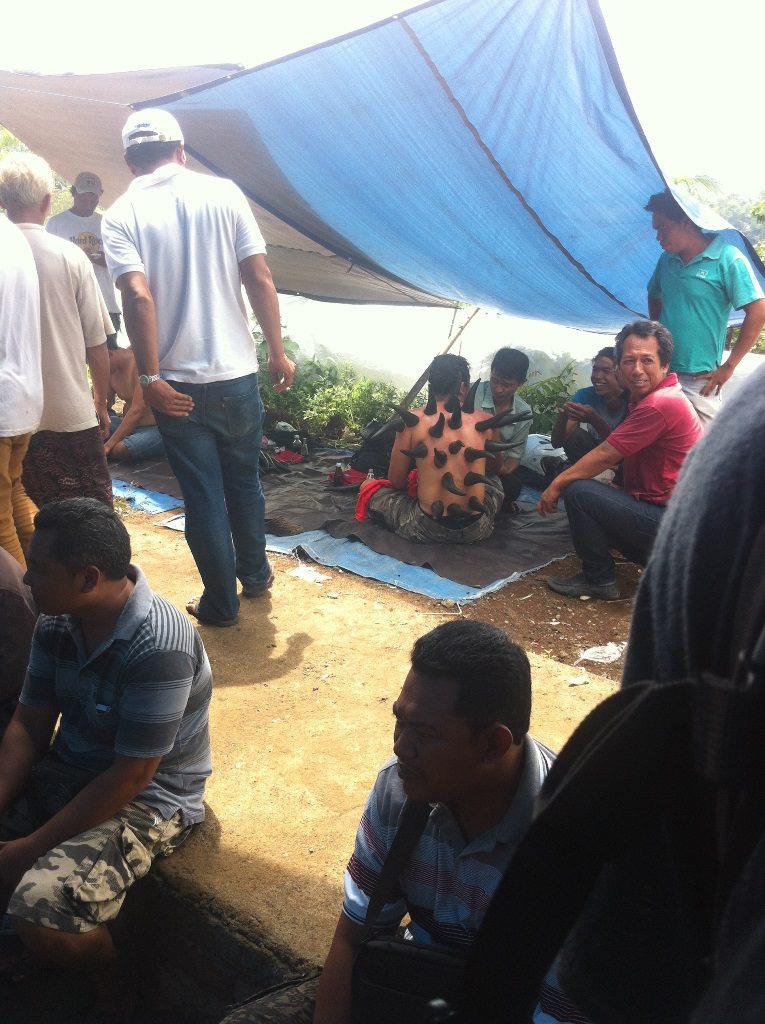 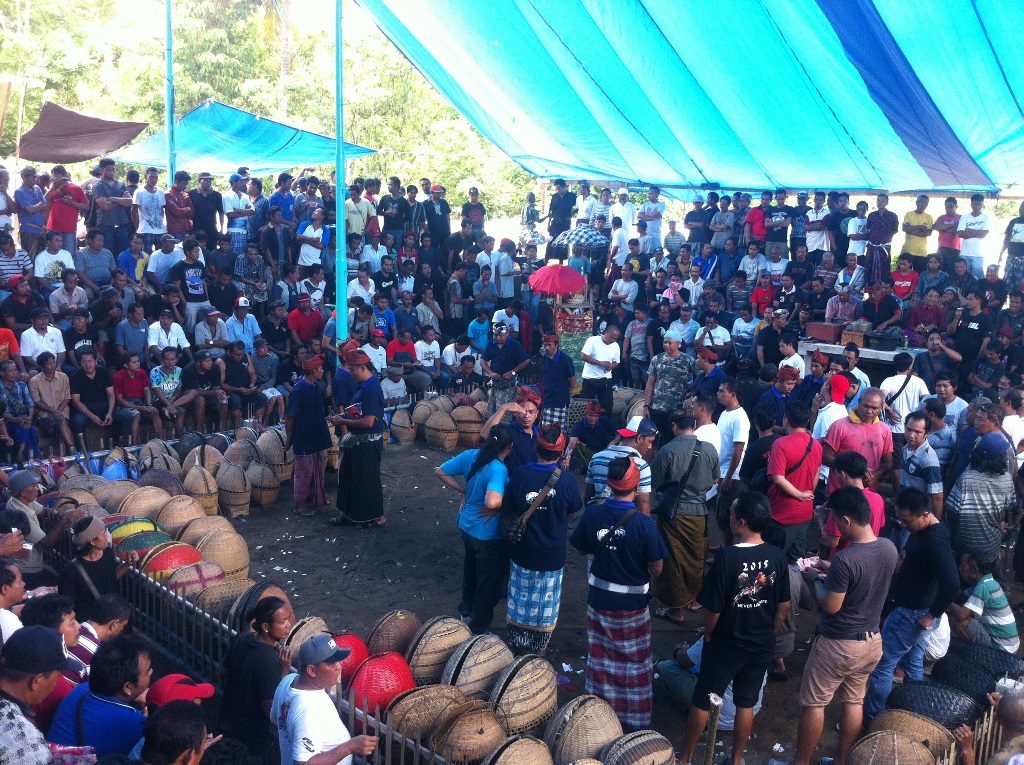