Even though we had spent a few days in Malaysia once, way back when, it took place strictly on the island of Penang so, somehow, despite our many trips to Southeast Asia, we had still never made it to the famous Kuala Lumpur. As luck would have it, the best (i.e. cheapest) flight from Nepal to Sri Lanka was on Malindo Air and routed through “KL”, as the cool kids call it, so we extended our layover to a few nights in order to check it out and enjoy some big city life with a couple days in Kuala Lumpur after our slightly more primitive time in Nepal (trust me, Kathmandu doesn’t count). 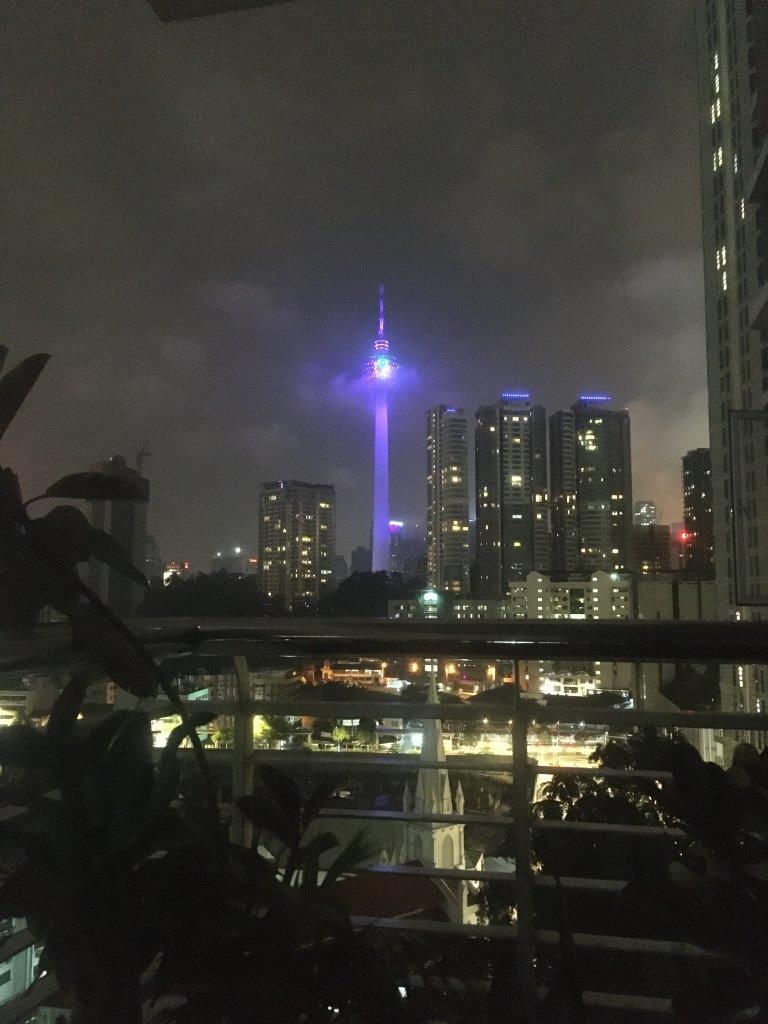 We got in quite late, although the benefit of that was next to no traffic on the fast, modern Malaysian freeways. We were giddy with delight when it took us just over half an hour to travel the 50 kilometres into the city from the airport, a distance only slightly shorter than the journey between Ramechhap and Kathmandu that had taken us 6 hours a few days earlier. For many people, Kuala Lumpur serves mainly as a transport hub for getting to the Perhentian Islands, Penang or Langkawi, but it is a pretty amazing place in its own right, and well worth exploring for a few days.

Our AirBnB was big and comfortable, had a balcony with a direct view of KL Tower and a rooftop pool. There are a lot of options just like this, which is one of the reason Kuala Lumpur is considered one of the best cities for digital nomads. Of course the apartment also had a steady stream of trains passing down below but, hey, that’s what ear plugs are for. After luxuriating in our own breakfast of cereal, fruit and yogurt (not a single fried egg to be seen for a change) we got psyched up for a familiar taste of home, namely, lunch at McDonald’s. The idea of an actual beef burger (or at least a reasonable facsimile) had me quite excited. Unfortunately, somewhere along the way – Bhaktapur, KTM airport, the plane, Malindo Air baggage handlers, my first Malaysian banana? – I encountered something that didn’t agree with my system. I started feeling a bit weird on the way to lunch, expressed concern while waiting in line for said lunch, and ultimately decided to give it a shot and see how it went. Well, the way it went was, about 10 minutes later I was sitting there white as a sheet and shaking like a jones-ing addict while Laynni hurried off on a reconnaissance mission to the toilet, generously making sure there were no unexpected impediments that would impede my route from Point A (desperately swallowing mouth sweats) to Point B (loudly vomiting into a McDonald’s toilet). Adding insult to injury, my aim was rubbish, meaning I had to add “cleaning puke out of my leg hair” to my already fairly unpleasant day. The rest of the afternoon I felt like crap – nauseous, fevered and seriously depressed about wasting the burger I’d looked forward to for so long – but thankfully it turned out to be basically a 24-hour bug, so by the next afternoon things were pretty much back to normal (i.e. wolfing down Thai flat noodles and complaining about the traffic). Laynni suffered through what seemed like a less intense version of the same thing, either a testament to cleaner living or maybe she just didn’t lick as many things in the airport. 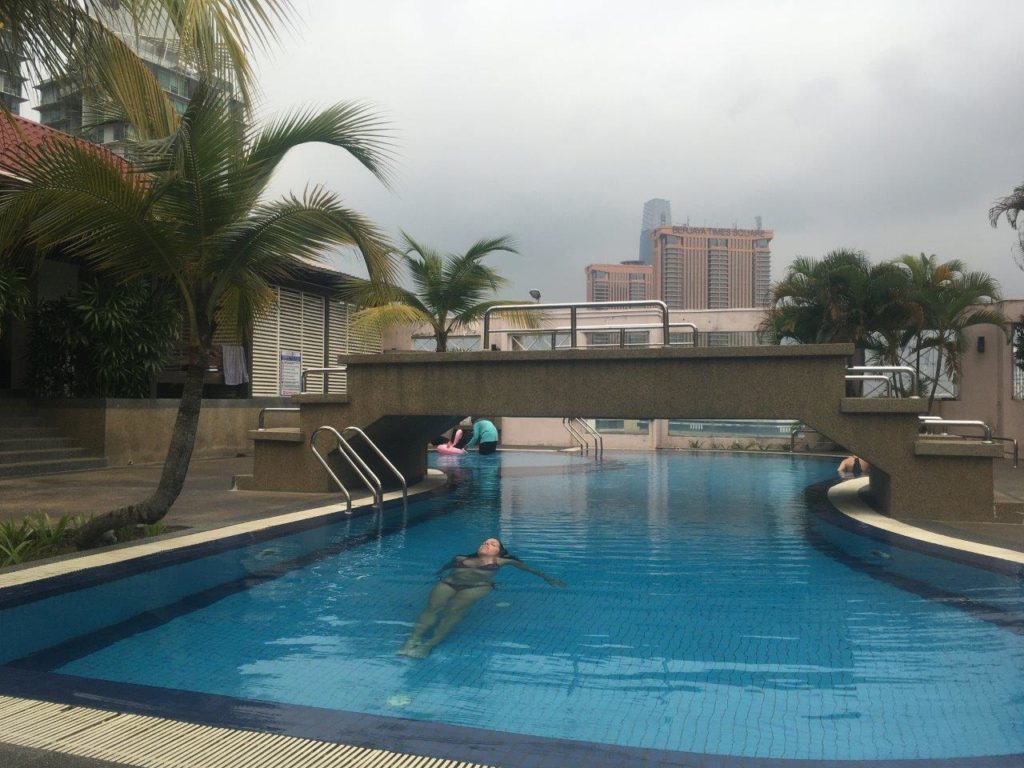 Anyway, here is a short list of notable KL attractions, based on our abbreviated visit and highly irregular mind frames at the time:

Even if the name only sounds vaguely familiar, the photos should do the trick. If it helps, try to picture Sean Connery scaling them while being super suave, as usual. There was a steady drizzle while we were there, which seemed like bad luck at first but ended up resulting in some very cool photos that manage to look both completely fake and completely awesome at the same time. Overall, even though we had a pretty good idea of what they looked like, actually seeing the towers in person they were far more impressive and stunning than we had expected, and with the rainy night adding another level as well. 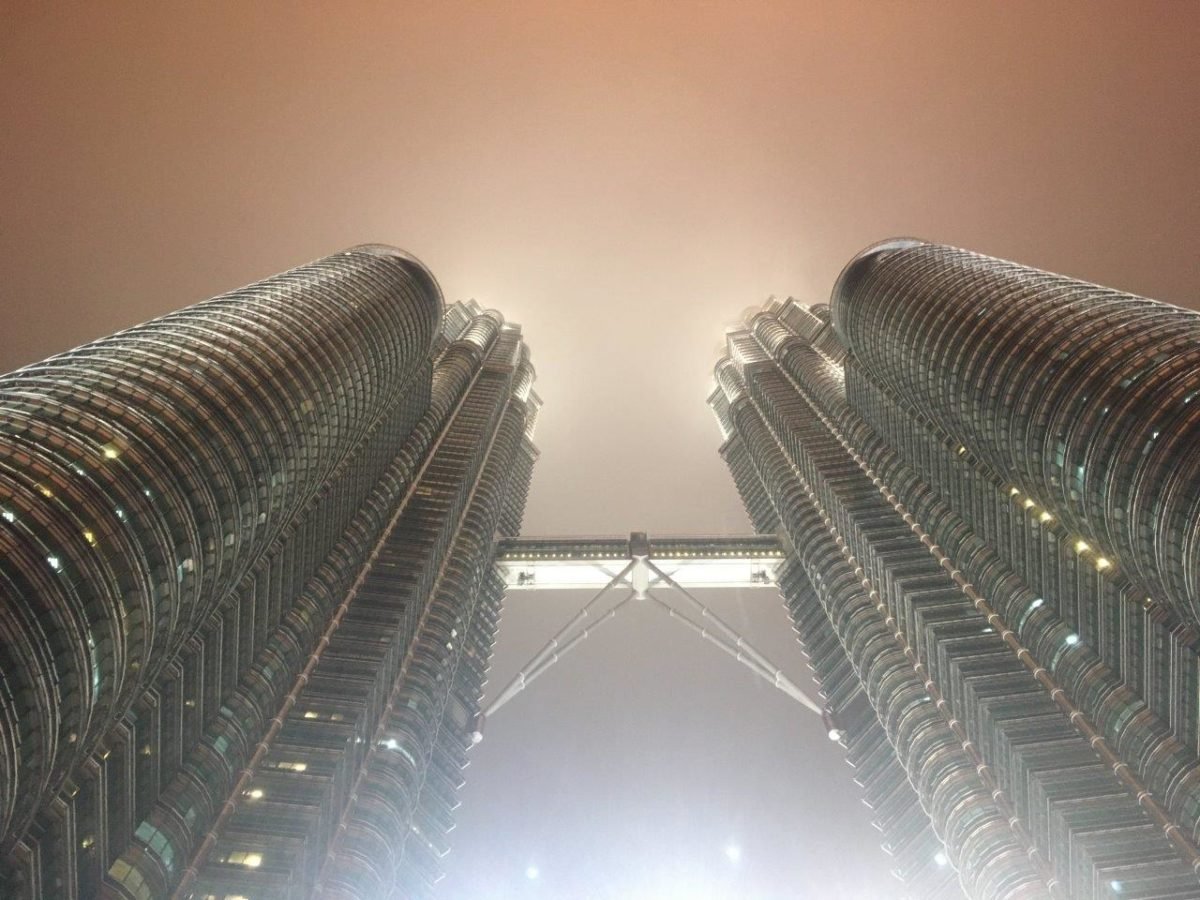 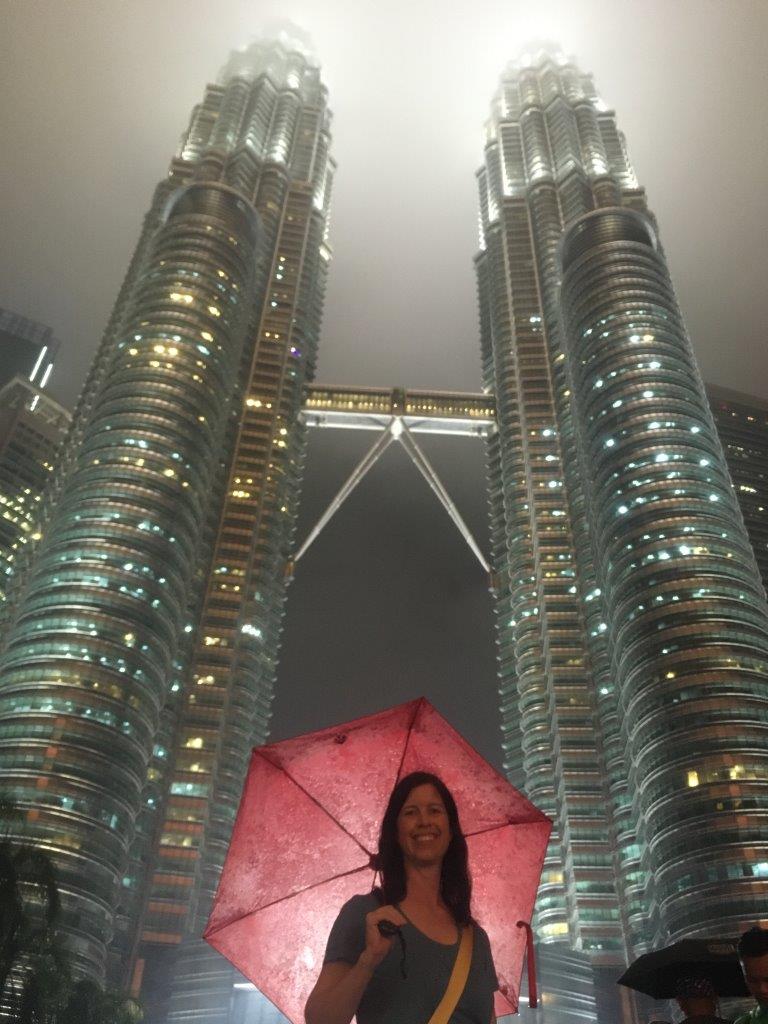 A big, colourful pedestrian street (unless you actually want to try to drive down the middle of a few hundred tourists, which apparently is allowed, and was attempted every 5 minutes or so for some reason) that offers Asian cuisines from basically every region in Asia and is close to some of the best vegan restaurants in Kuala Lumpur. 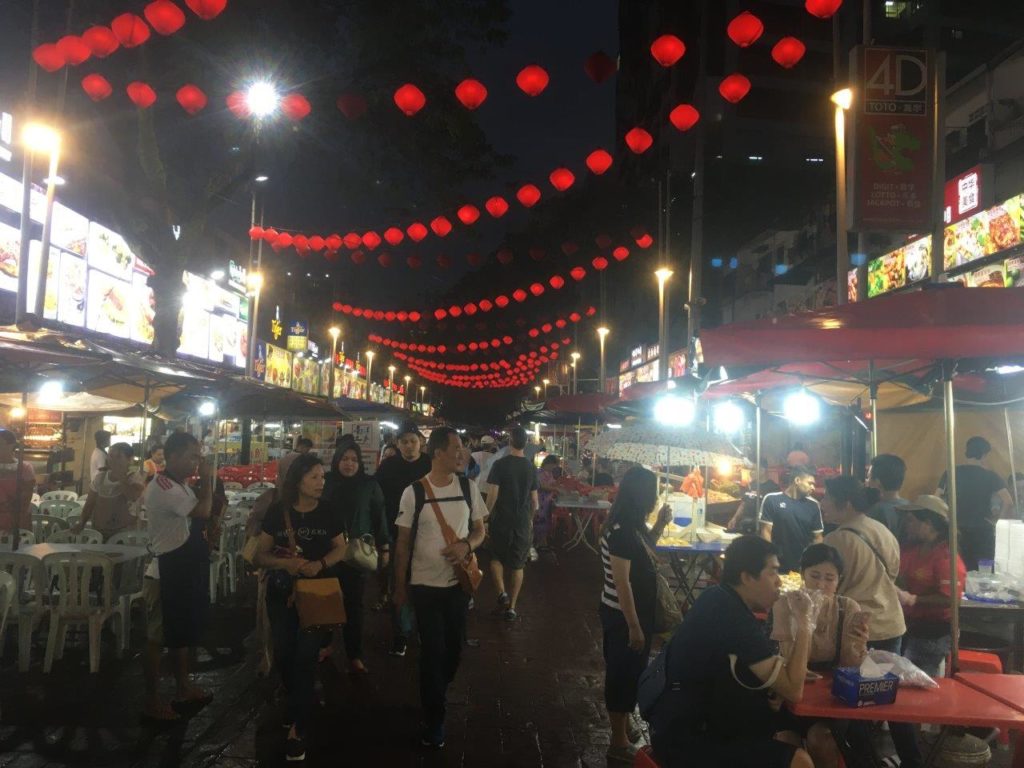 A big, fancy old building, with a grassy park across the road and an interesting river in behind, with a bunch of temples and stuff in the streets around. Etc. As you may have guessed by that description, we did not partake in the services of a guide… 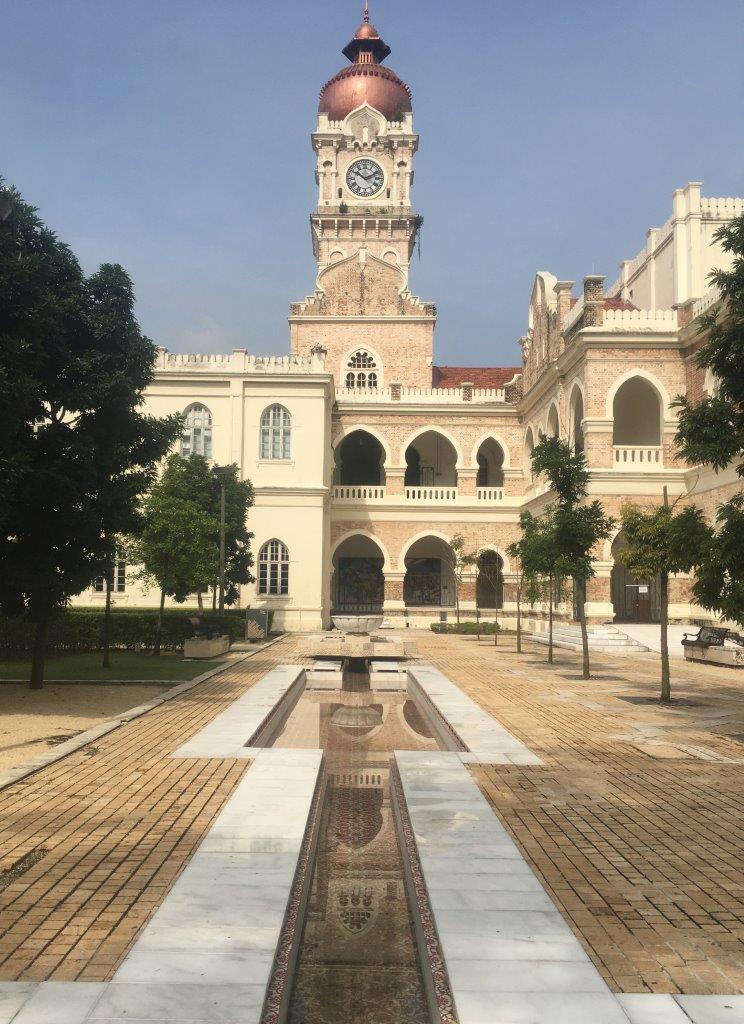 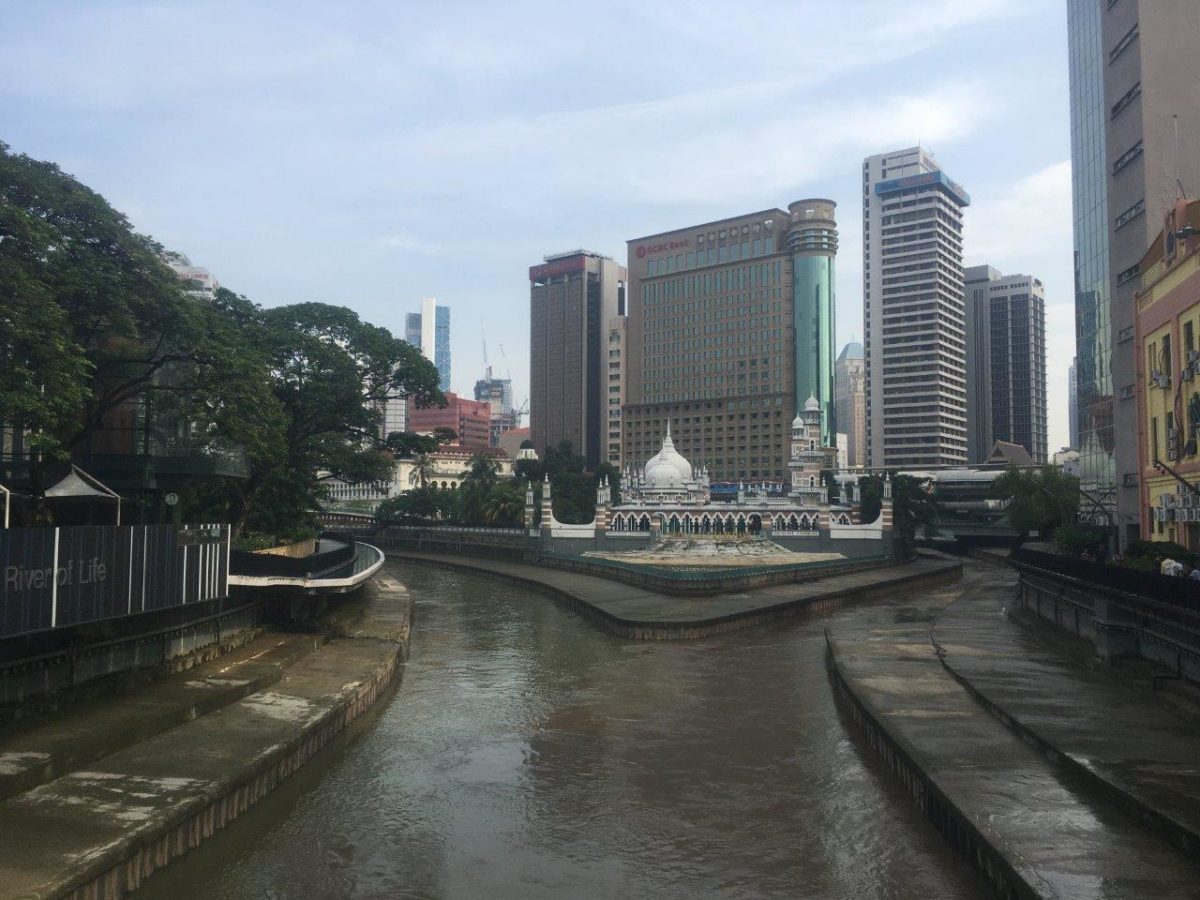 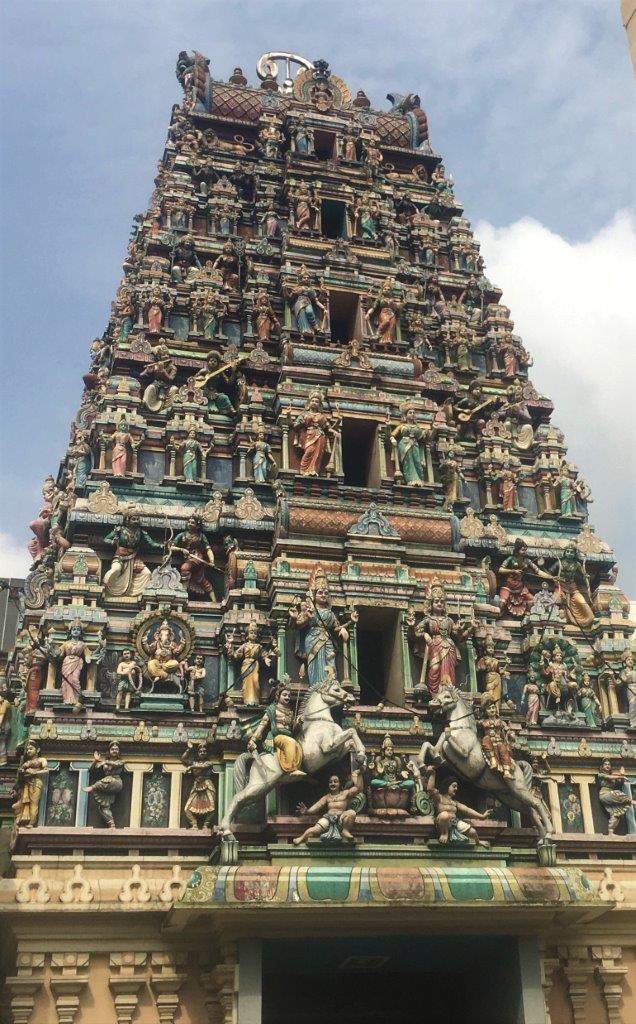 Even though we didn’t actually do any shopping, it was very clear just how big a part of Kuala Lumpur life shopping is. From Jalan Petaling – a street renowned for its tacky tourist fare and cheap knock-offs – to extensive malls of all shapes, sizes and levels of modernity, it felt as though most streets and neighbourhoods were ultimately divided by merchandise. For example, we passed through one mall exclusively providing electronics. Roughly 30 different shops selling phones, phone cases and phone-like accessories. For example. 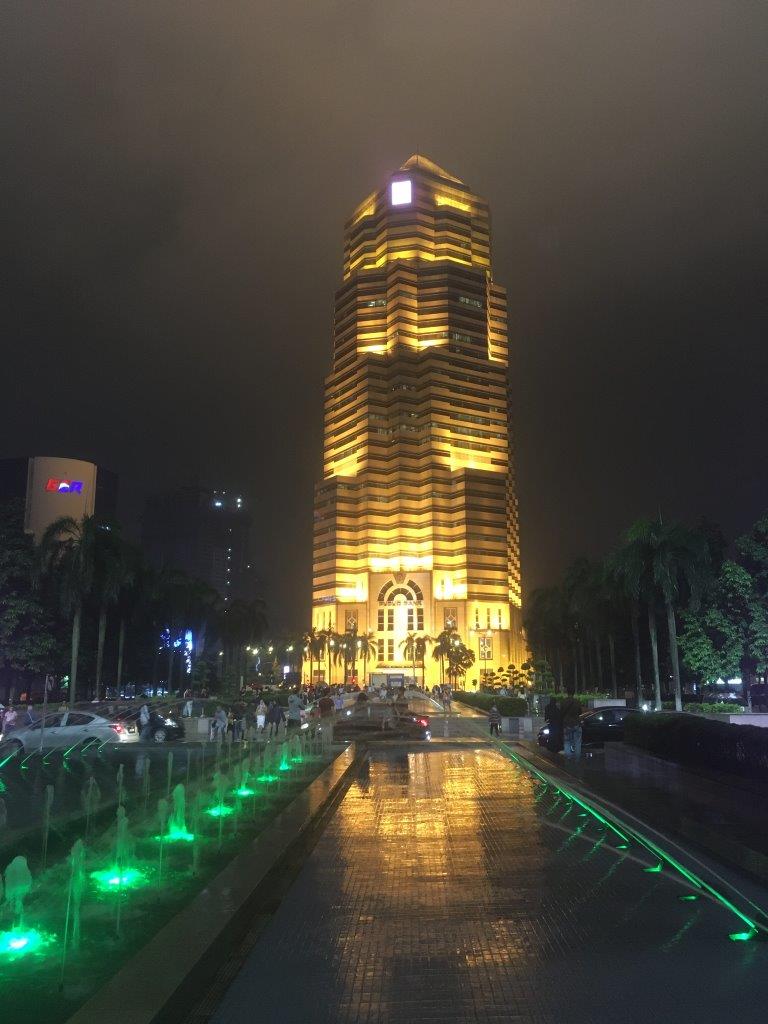 This is basically a mall food court, except with a fascinating back story. Kuala Lumpur has always been famous for the quality and variety of its street food so, at some point a while back, some Malaysian billionaire with fond memories of hunting out the best hawker stalls in the city with his father, came up with the excellent idea to choose the best of the “heritage stalls” and invite them to be part of what essentially amounts to an all-star food court. So, now, tourists and locals alike are able to target the best of every unique Asian genre of street food, chosen by theoretical experts, and in a more comfortable indoor setting. My pork noodles were really good, although the noodles Laynni chose ended up being slightly more worm-like than she considered ideal. 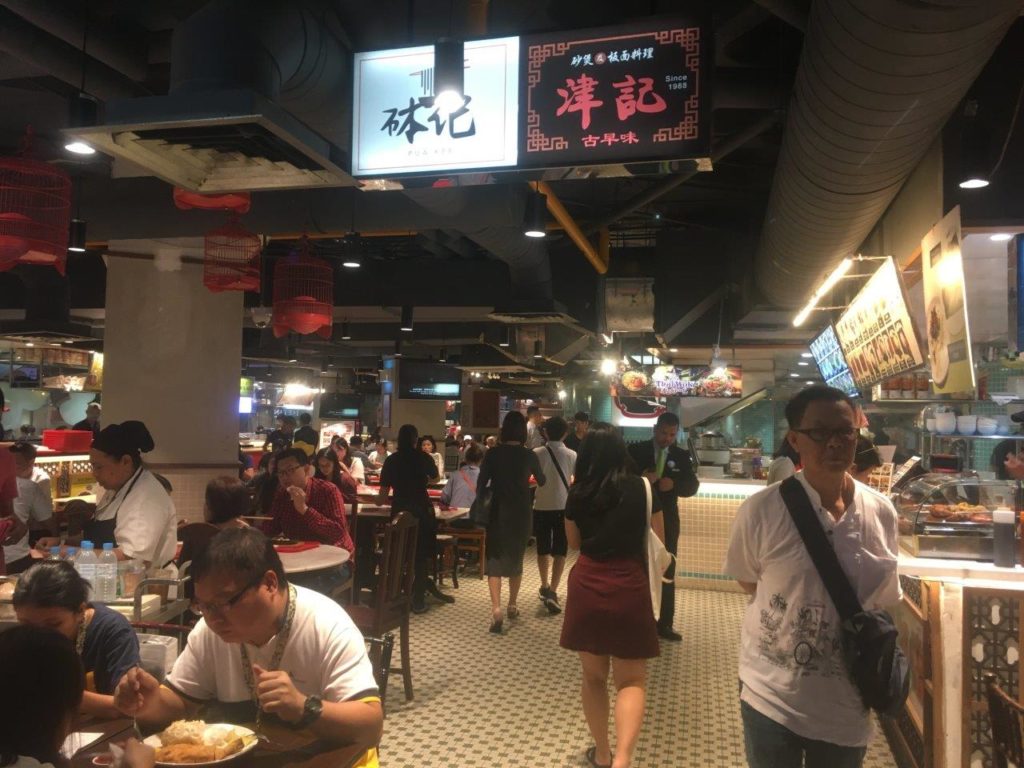 And that was more or less it – it’s not like KL was a long-sought after destination withering away for years on our bucket list. We just really wanted to spend a couple days in a real city, with lots of food, in a comfortable apartment, that felt nothing like the Nepal we had just left or the Sri Lanka we were heading to. And I think it is safe to say it accomplished that modest goal, even if that McDonald’s bathroom will never be the same again.